Khomlins in Kaliningrad - local brownies living on the city streets

There is a small (or rather small) art object in the amber capital - the city of Kaliningrad, which from the very first days of its creation won the hearts of local residents and guests of the city - these are cute and very cute homlins.

Kaliningrad sculptures of Homlins represent members of one large family - from the older generation (grandparents) to the youngest.

The figures of the Homlin family themselves with a good-natured appearance and "mouse ears" have miniature dimensions - slightly smaller than the palm of an adult and are made of bronze.

The "Homlin family" has already become a new symbol of Kaliningrad, like the gnomes in Wroclaw. 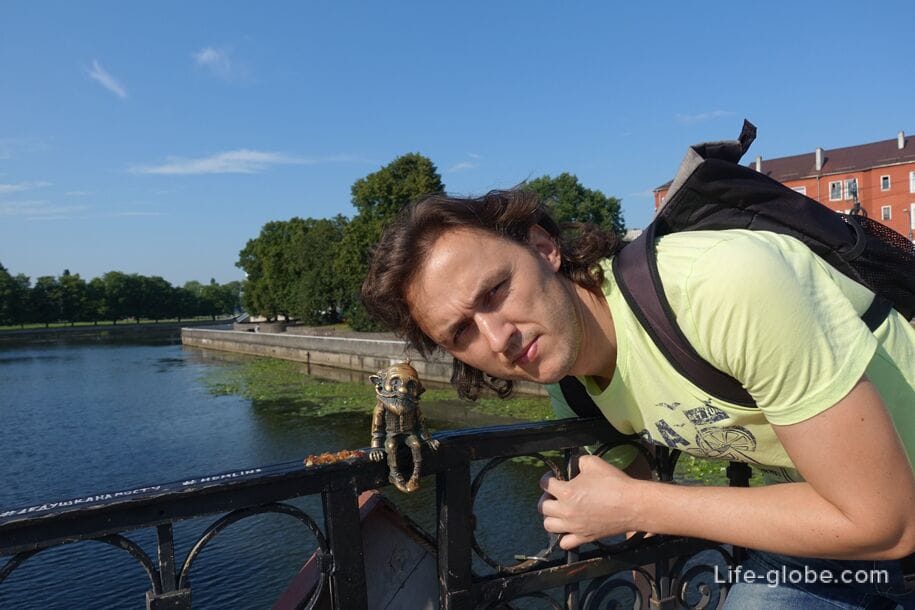 The figures are installed in different places in the center of Kaliningrad, near significant attractions.

In total, there are seven homlin figures installed in the city and each of them has a name.

Walking from one homlin to another, you can get acquainted with the city along the way and see its most iconic sights. It turns out that a tourist route is laid between the figures of the homlins.

Kind locals take care of the homlins, and during the winter months they are dressed warmer by tying scarves and wearing hats.

Homlin's grandfather Karl was the first of the family. It appeared in the summer of 2018.

The eldest of the homlins is depicted sitting and installed on the railing of the Honey Bridge connecting Kant Island with Oktyabrsky Island (Fish village).

Grandpa Homlin is also known as Grandpa on the Bridge. 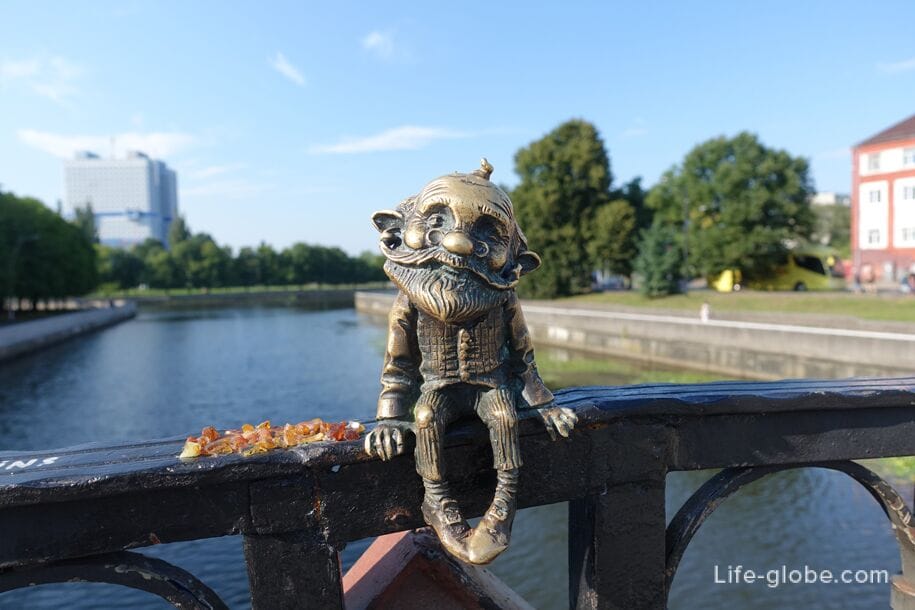 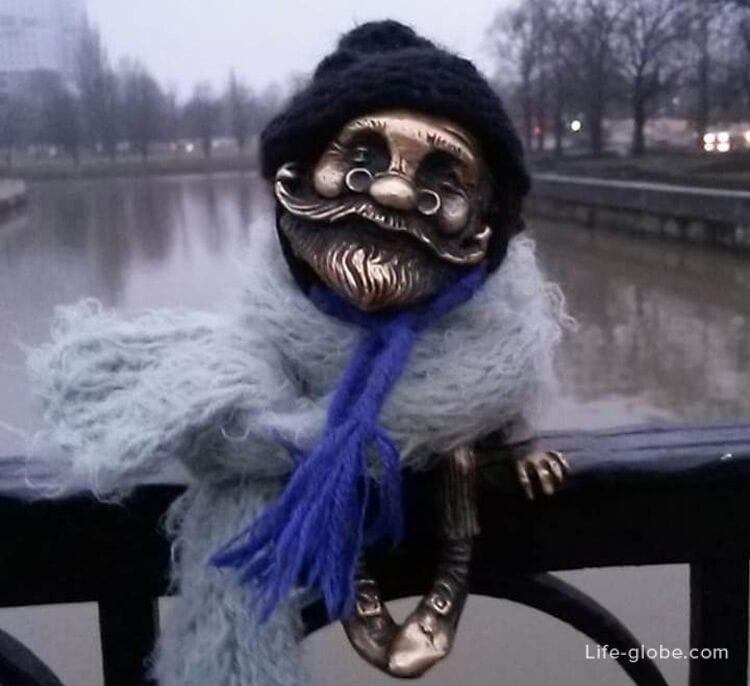 Homlin's sculpture grandma Marta depicts the wife of a "Grandfather Brownie". It is presented in a standing pose and installed at the entrance to the Amber Museum (Dona Tower). 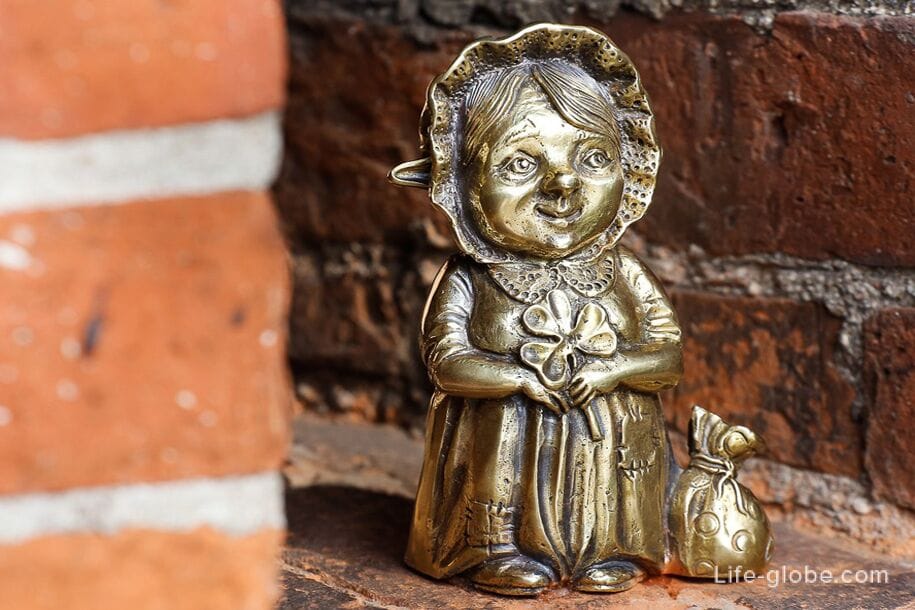 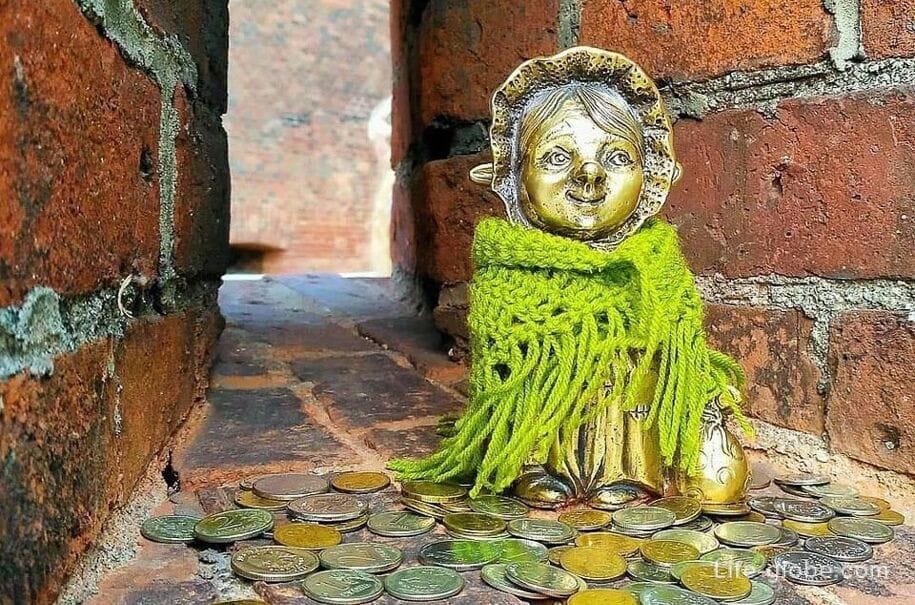 Baby homlin - homlin-sailor (homlin "Little Sailor"), the third of the family, was installed on July 26, 2019 on the railing of the pier of the Peter the Great Embankment, in front of the main building of the Museum of the World Ocean, at the museum ship "Vityaz".

Baby Homlin, who is called Vitya, is depicted sitting in a small paper boat (in the style of the museum itself) and holding tightly to his ship with his hands. 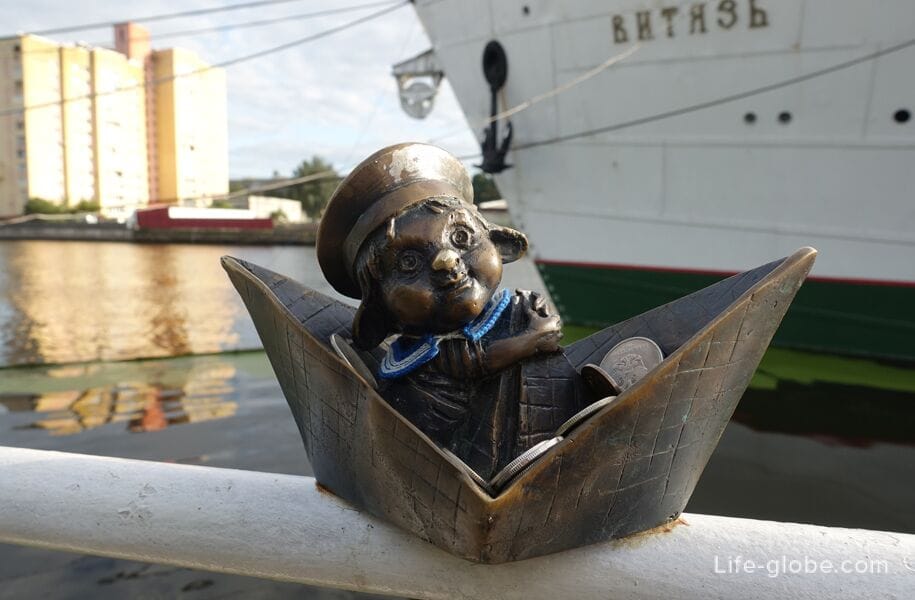 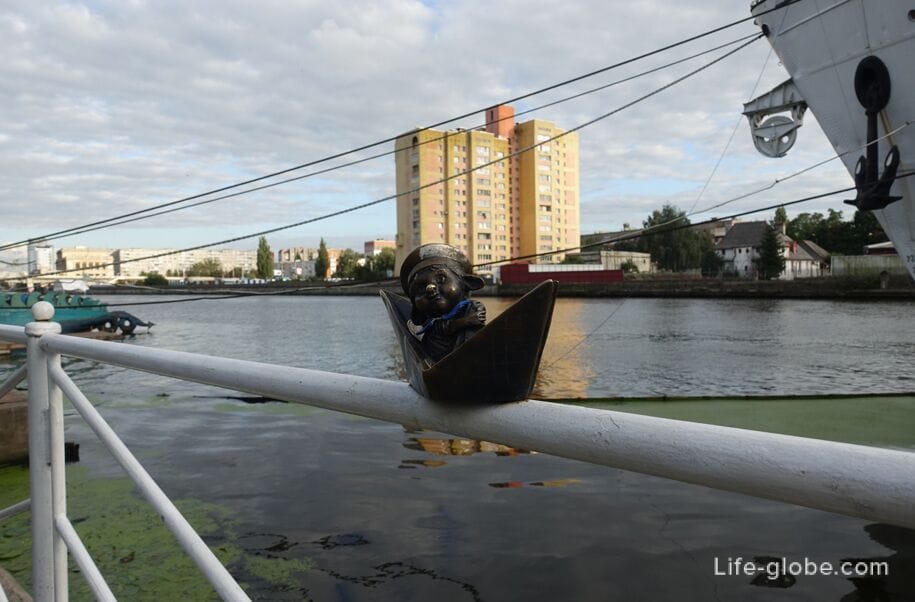 Homlin baby Ulya was installed on June 19, 2020 on the railing of the fence in front of the entrance to the Kaliningrad zoo.

A mischievous girl from the Homlin family is depicted sitting on an unusual vehicle - a snail. 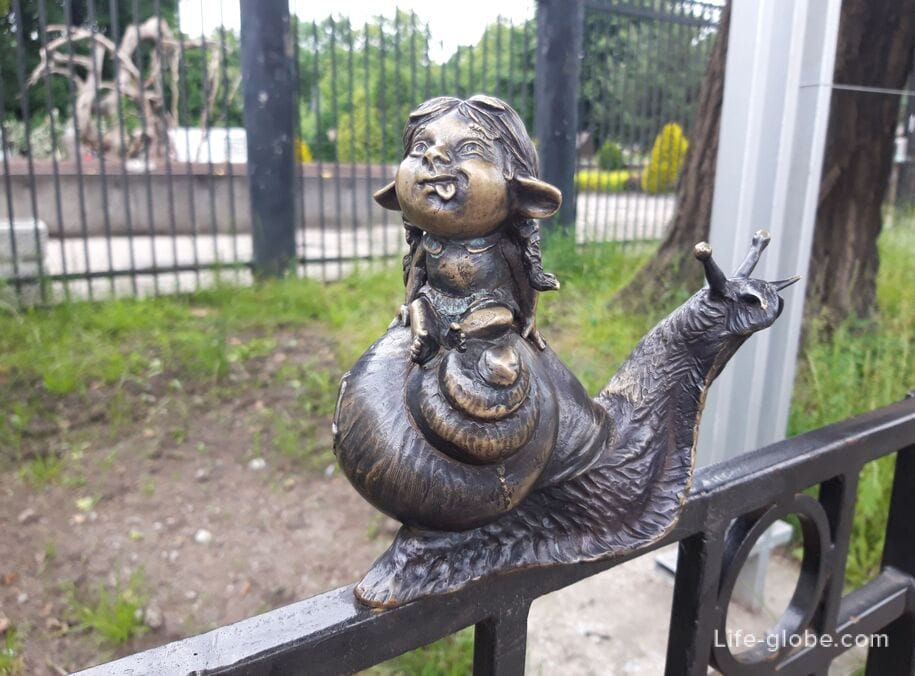 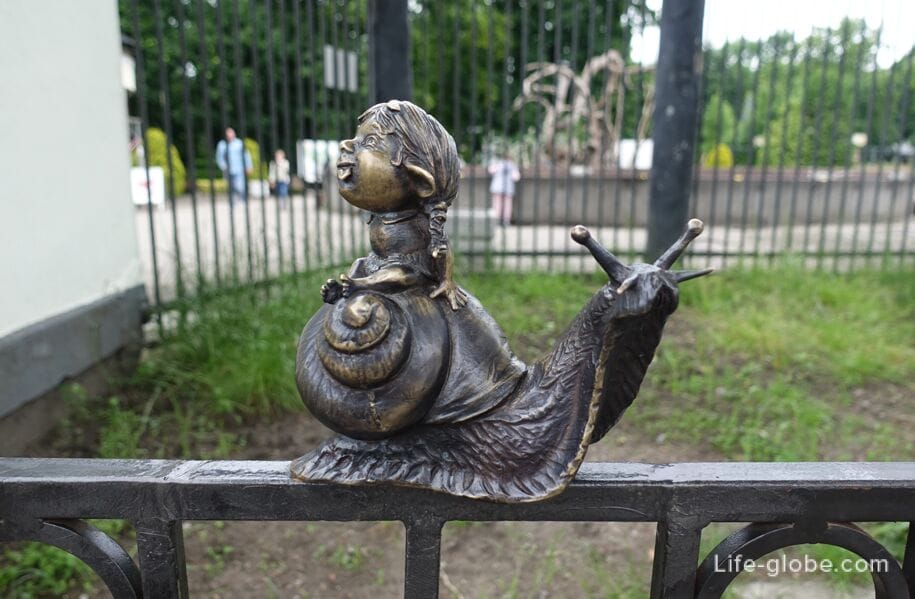 Homlin's dad appeared on the day when the first one was celebrated The All-Russian Amber Day is July 21, 2020.

The figure is installed on the railing of the descent from the trestle bridge, near the main entrance to the Museum of Fine Arts (former Konigsberg Stock Exchange), which is near the Stock Exchange Square with a singing fountain and Kant Island.

The head of the Homlin family, whose name is Leo and is also known as the Homlin artist, is depicted sitting with a thoughtful look. He is clearly thinking about something high and unearthly, or maybe he is thinking about his new creative work. Next to the mini-figure of Homlin lies his big hat.

They say the homlin dad is the most creative character from the Homlin family.

The Homlin pope was named Leo (Leva) in honor of the great artist Leonardo da Vinci and the shield-holders who stand guard over all creative natures at the Museum of Fine Arts. 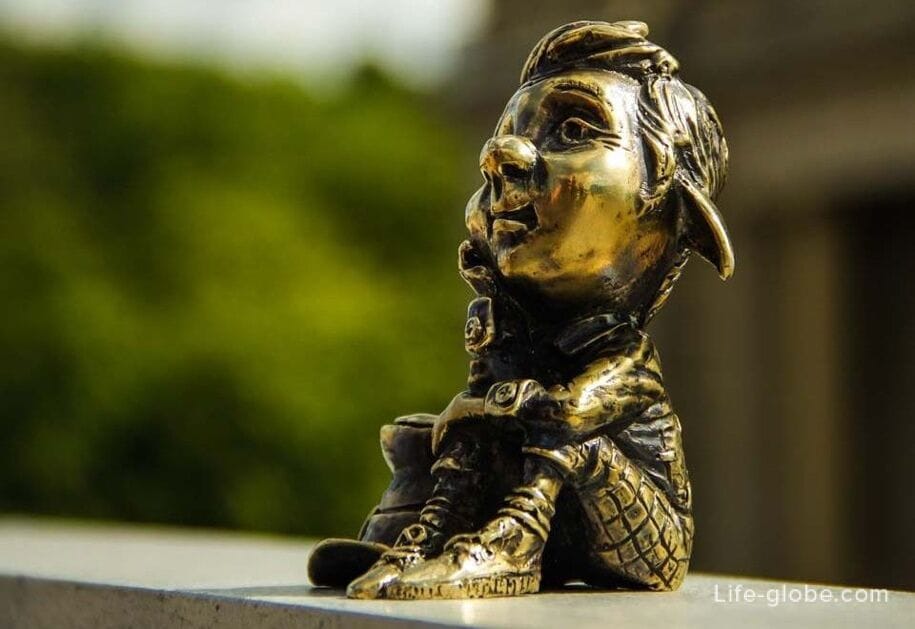 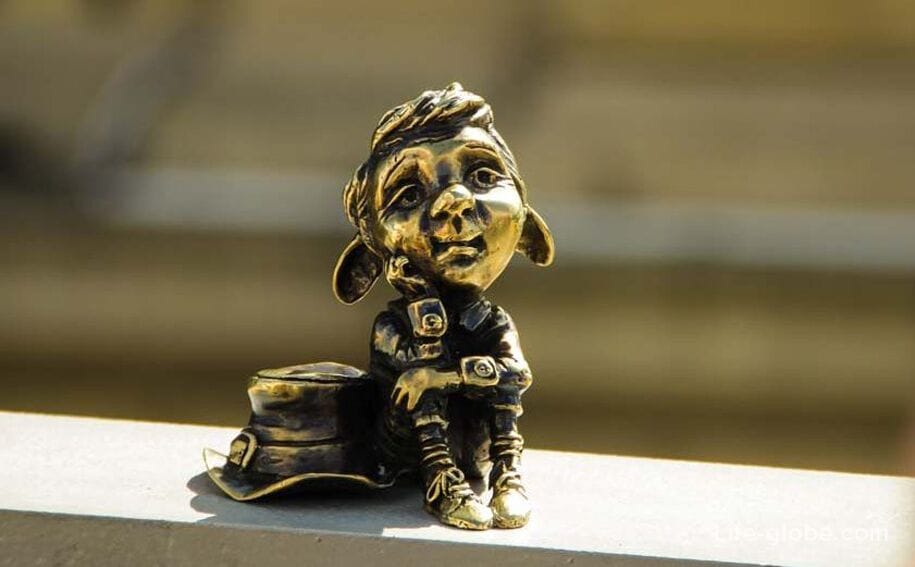 Mom Homlin named Varya appeared in the city on July 21, 2021 - the Day of Amber in Russia.

Kind mom Homlin is depicted in a standing pose and blowing a kiss to all passers-by.

The figure of Homlin's mother is located near the Wrangel Tower, located at the address: Proletarskaya Street, 2 / Professor Baranov, 2a. 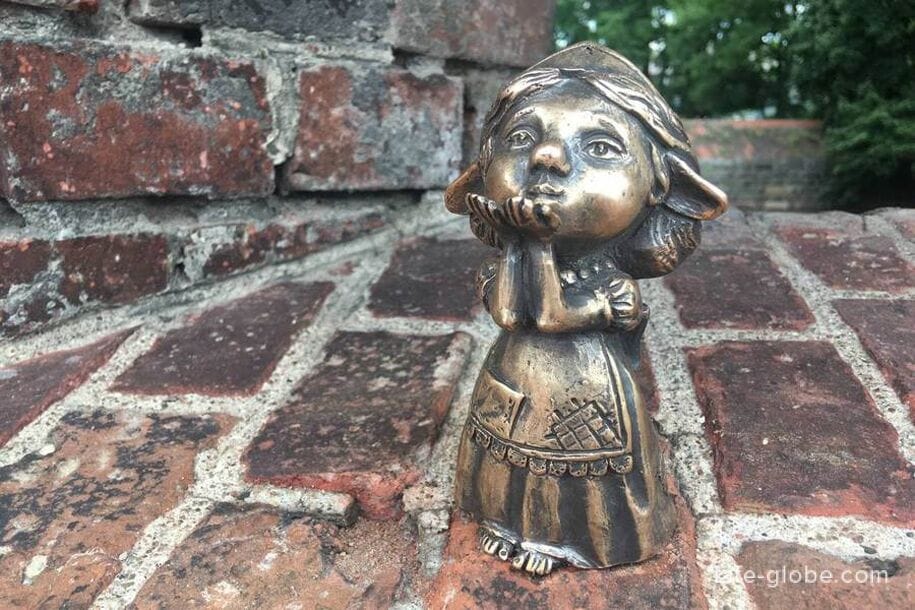 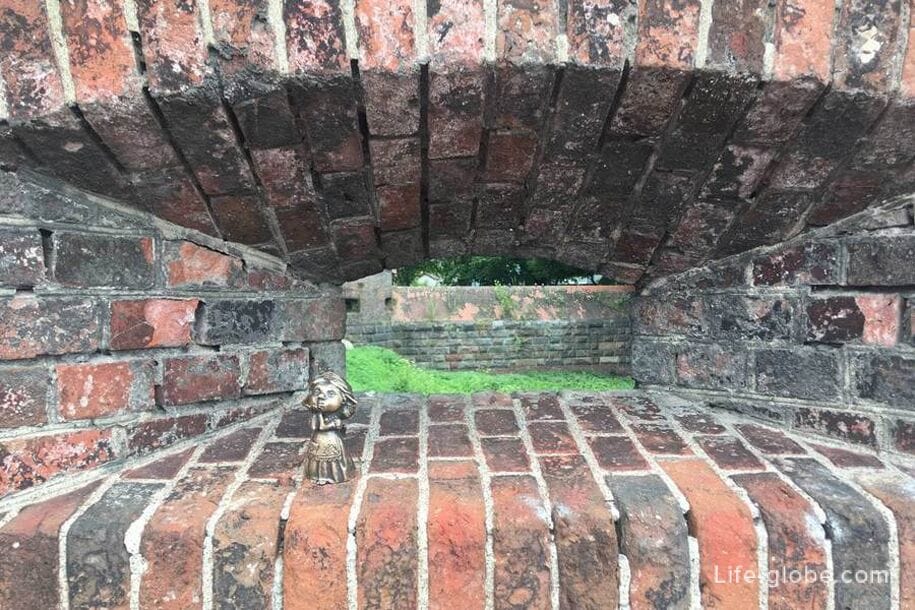 The smallest of the Homlin family, baby Anton, appeared in Kaliningrad at the same time as mom Homlin and became the last figure from the family.

Since the Homlin kid is located in the historical quarter of Kaliningrad Amalienau, he is sometimes called the Kid from Amalienau.

The baby, as befits small family members, is carefree, he lies on his back and looks at the clouds floating over his head, simultaneously teasing passersby with small bare heels.

The baby is placed on the curb, near the museum of the Altes Haus apartment museum (Altes House), located at 11 Krasnaya Street. 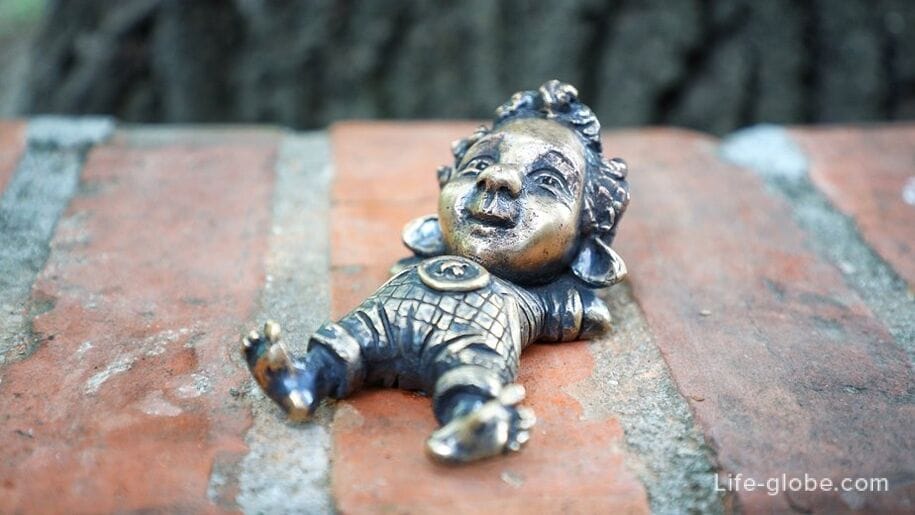 There's even a rhyme written about the nice little homlins. Author Vladimir Karaevsky.

On the Honey on the bridge
Homlin Karl as on duty
The account is kept by the ships,
Clouds and finches.
Homlin Martha in the Don Tower
Dried belladonna,
Different necessary herbs,
To treat boogers.
Near "Vityaz" - Vitek,
Just whistle and run
To your paper ship
A brave sailor.
The kids are making noise, frolicking,
The zoo is upside down.
On the snail Ulya rushes,
Helps with the tongue.
Next to the Stock Exchange sad Leo
Galileo remembers,
Watering the stars with light
The long-eared poet.
We all like Amalienau,
You will find the glorious Antoshka there.
Lying on the palms of your hands,
The Baby is happy.
In the Tower of Wrangel Varya Mama
Waiting for a telegram from loved ones.
Remembers, believes, loves, waits,
He sends an amber kiss.
Time is not broken
Little Homlins.
For many, many years in a row
They take care of Kaliningrad.

P.S. The homlin figurines were made in the "homlin workshop" by Natalia Shevchenko. In the workshop you can buy amber products and various souvenirs, including in the form of small homlins. The website of the master of homlins: homlins. 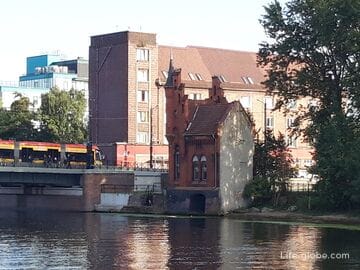 House of the caretaker of the High Bridg... 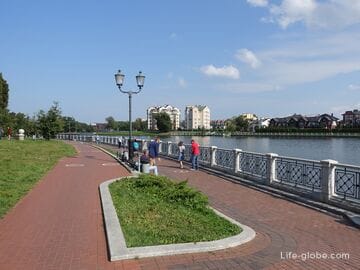