The areas of El Jonquet and Santa Catalina are two small residential historic district that belong to the larger district - administrative area Ponent, comprising the city of Palma de Mallorca and is located on the West side of the main historical and tourist center of the city.

These two areas are inextricably linked, as it is located next to each other on a hillside and has historically been a fishing villages, as their location was very close to the sea.

The district of El Jonquet or Es Jonquet is one of the oldest and most historic quarters of the city of Palma. It was formed by small houses of sailors and fishermen who once lived by the sea and was the ancestor of origin of the neighboring district of Santa Catalina.

This small but charming area characterized by narrow streets with small typical houses, originally built by families of fishermen.

This area is considered an object of cultural interest (BIC) and protected by a special protection Plan (PEP) as the historical heritage of Mallorca. 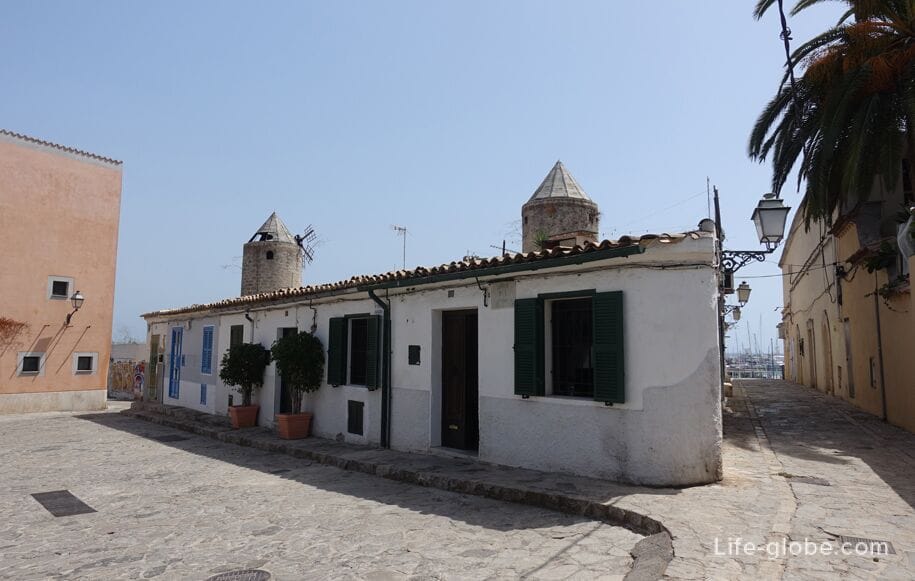 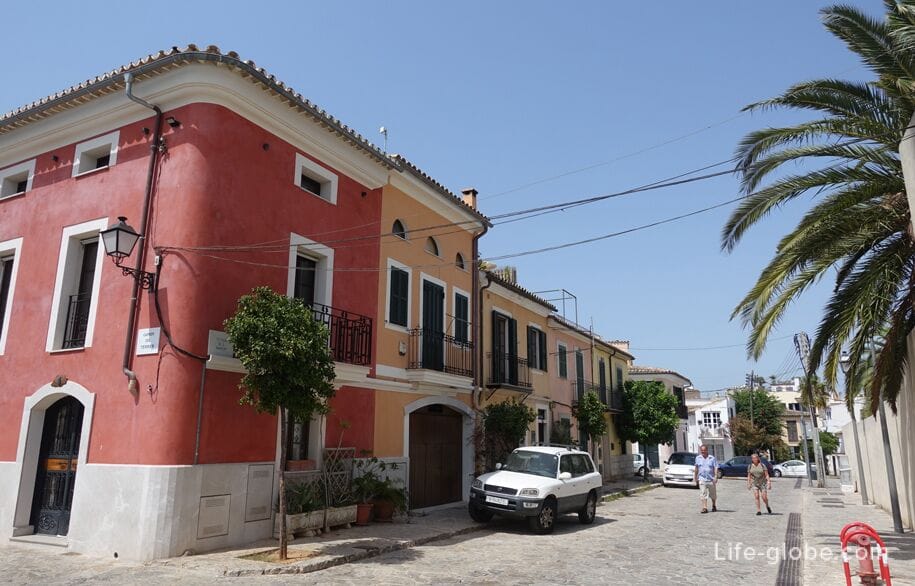 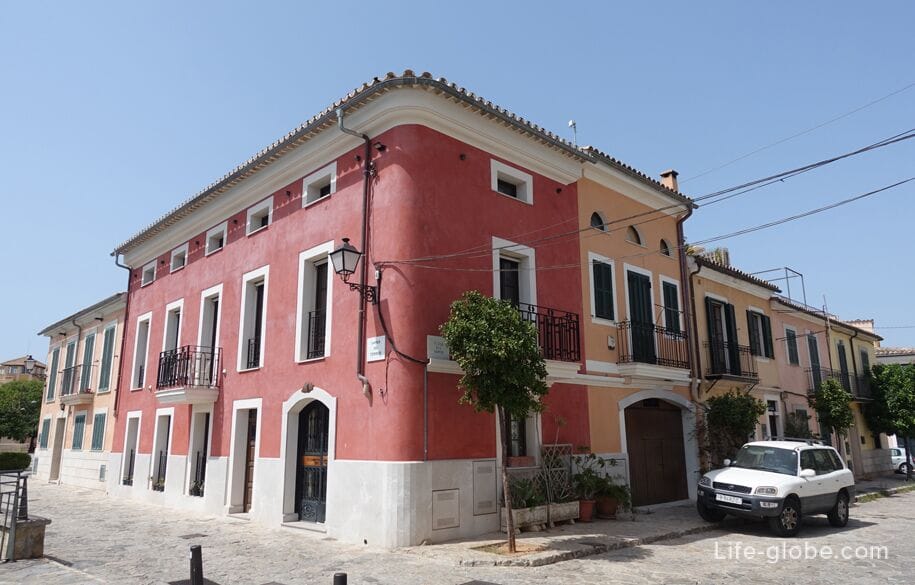 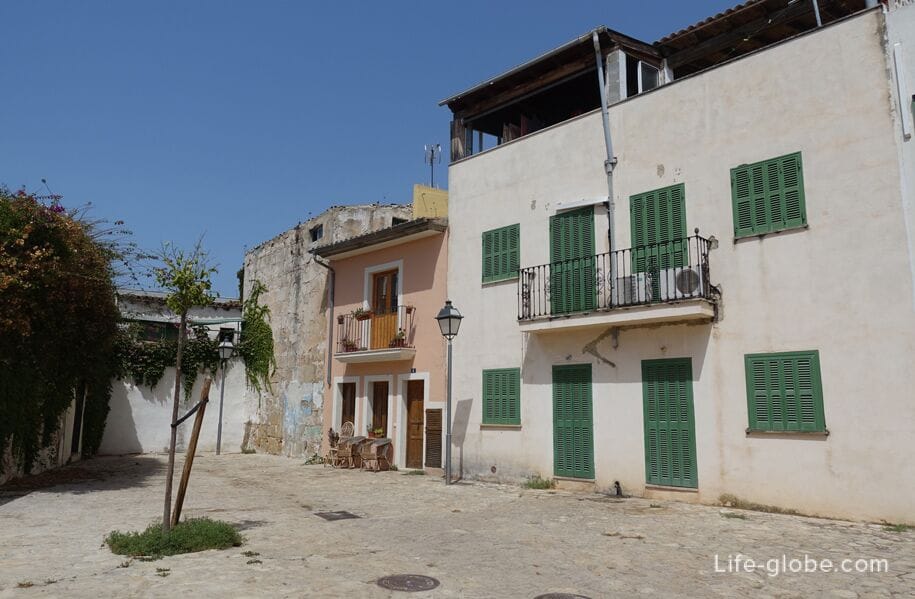 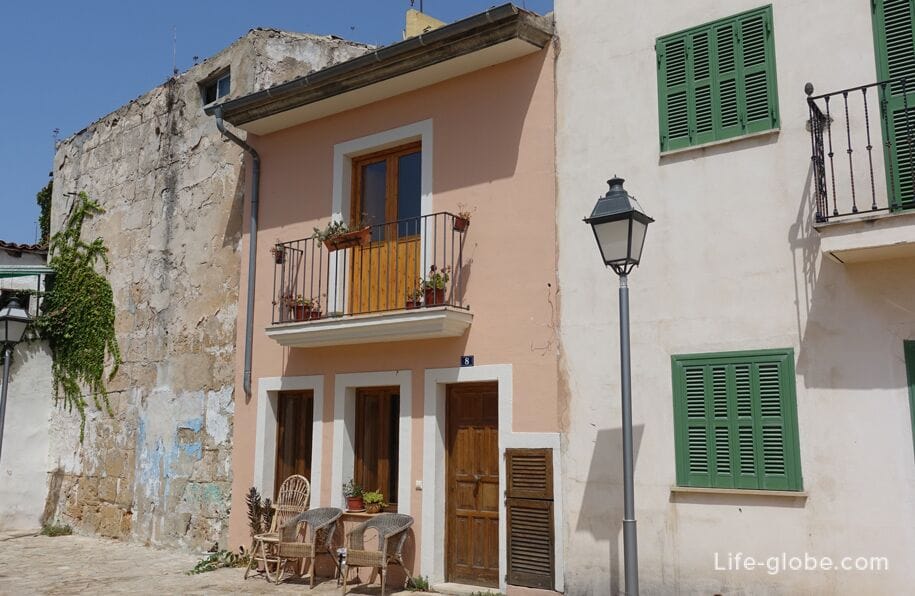 One of the most important attractions of the area are Junket old mill, which in turn are also one of the emblems of the region and the island of Mallorca and also one of the first points of the island, which were visible from ships and boats arriving in the port of Palma. 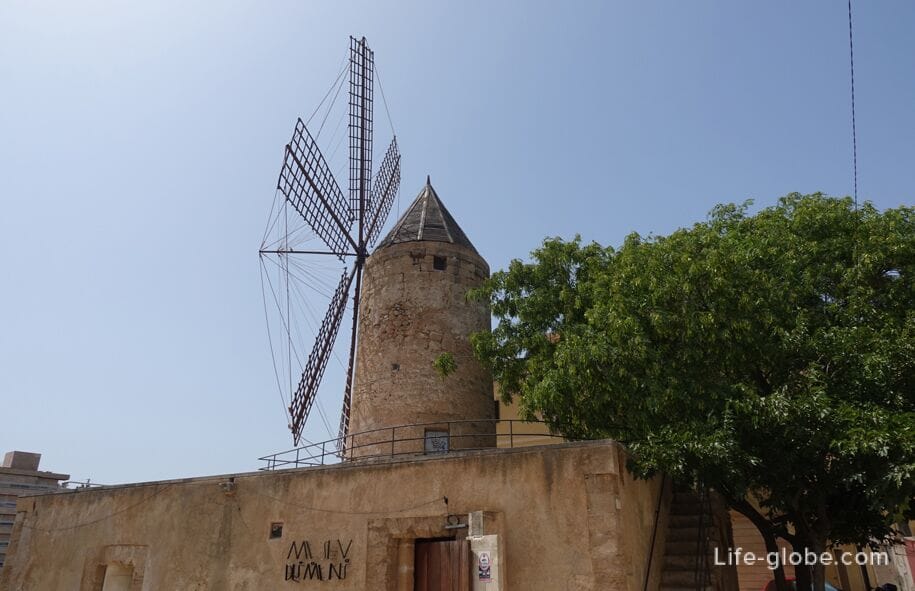 Since the area of es Jonquet is located on a hillside, which runs along the seafront Paseo Maritimo, from some points of area (observation deck) open panoramic views of the waterfront, the port, the Bay of Palma, as well as a couple of important attractions of Palma de Mallorca. 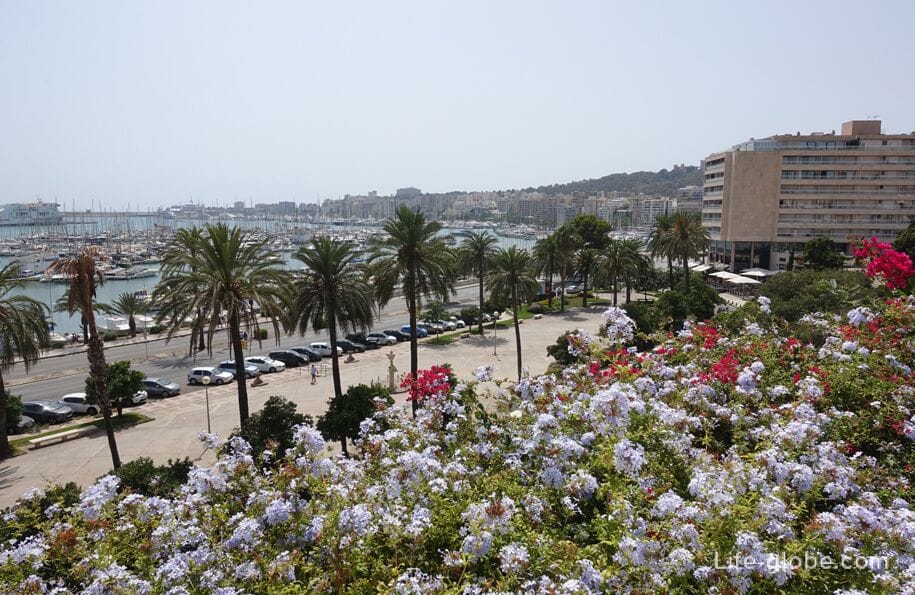 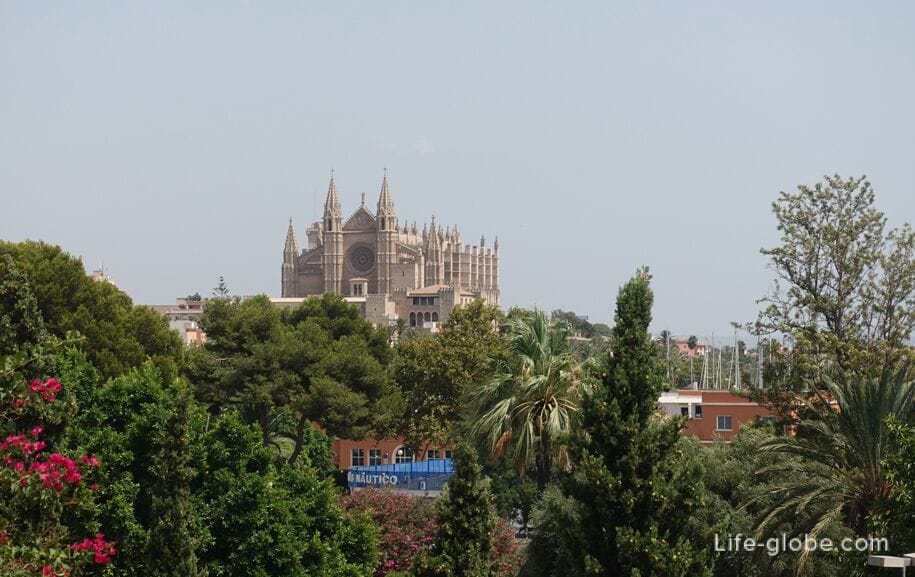 View of the castle of Bellver rising on a hill 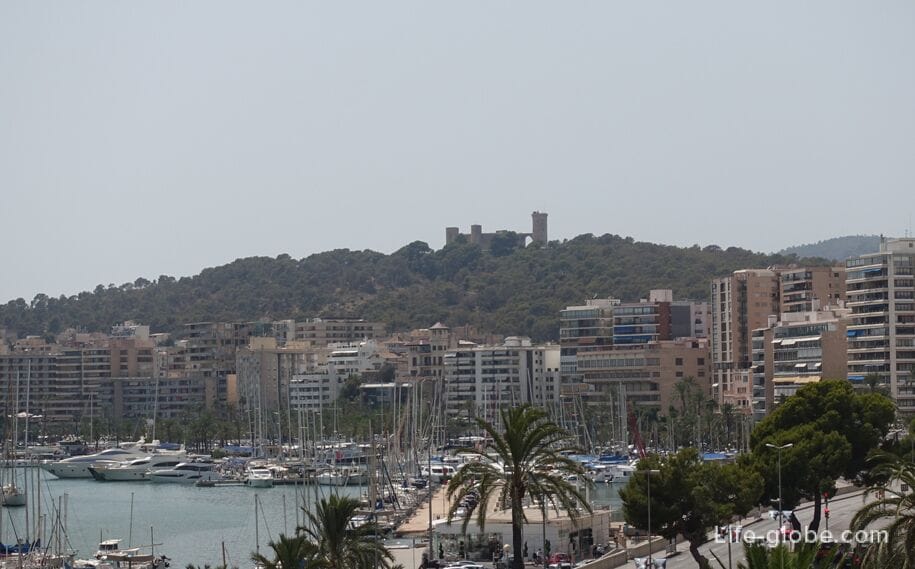 In addition to the above, within the area of El Jonquet are: cafes and restaurants, accommodation facilities, municipal theatre and Terra Marie (Teatre Municipal Mar i Terra), the ethnographic Museum, which tells about the history and operation of windmills on Mallorca Museu dels Molins - Molí d'en Garleta) and Rotators square (Plaça dels Rentadors).

The District Of Santa Catalina

The district of Santa Catalina (Santa Catalina) is adjacent to the El Jonquet, situated just above the latter, and is inseparable continuation.

The area is larger, it is newer, but nonetheless, also is considered historic. The core of the district once comprised the settlement of sailors and fishermen. In the late 19th and early 20th centuries, the area was enriched with modernist buildings, many of which are still preserved.

Residents of Palm called the district of Santa Catalina one of the typical neighborhoods of the city of Palma.

The main attractions of the area are:

The market also has bars and cafes. 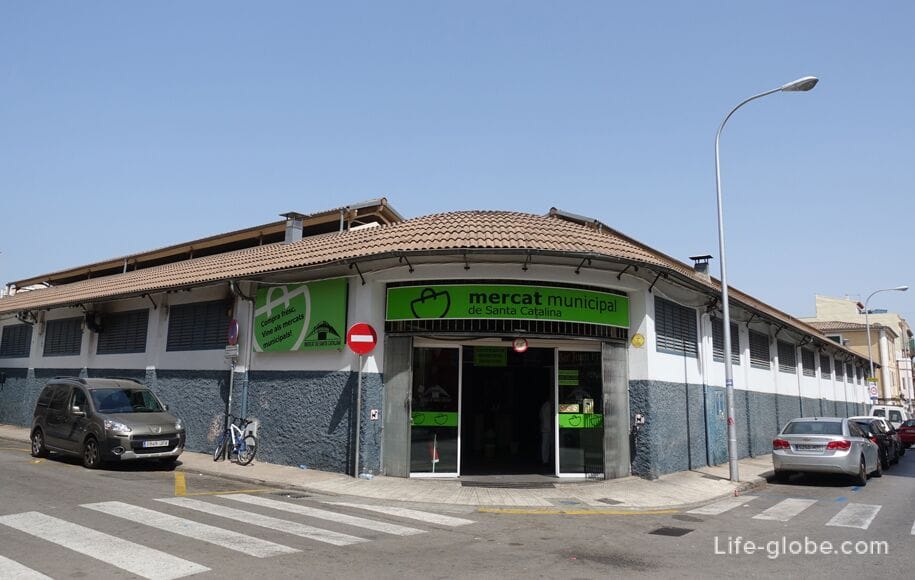 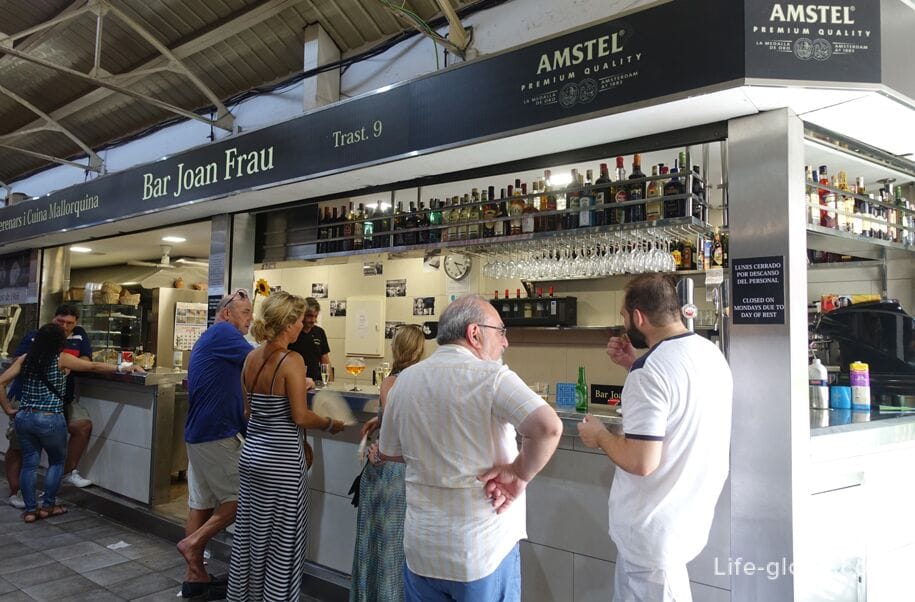 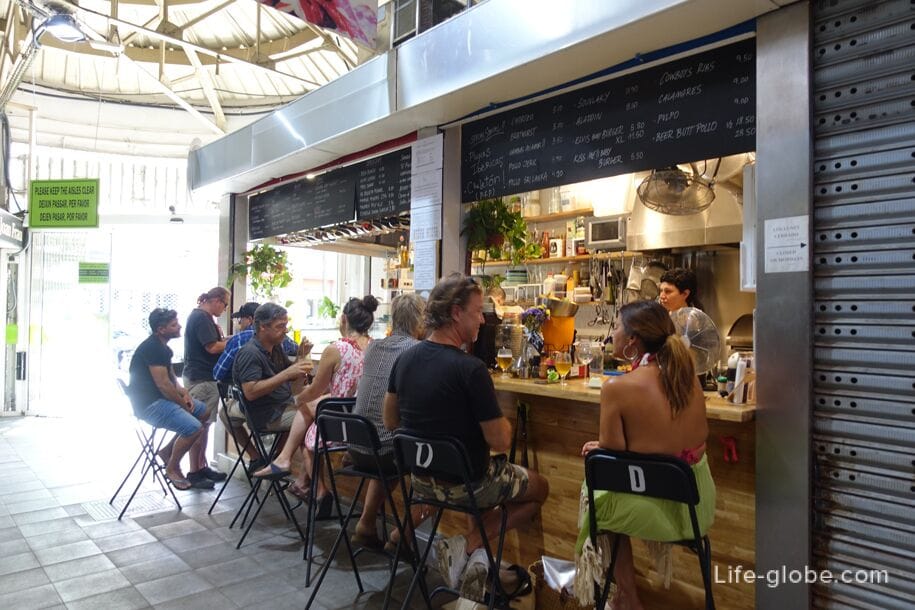 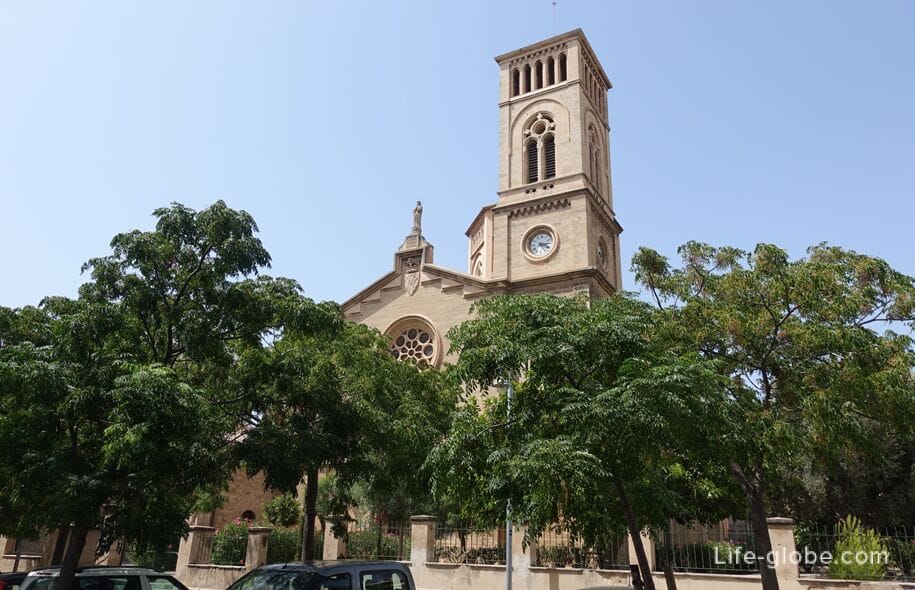 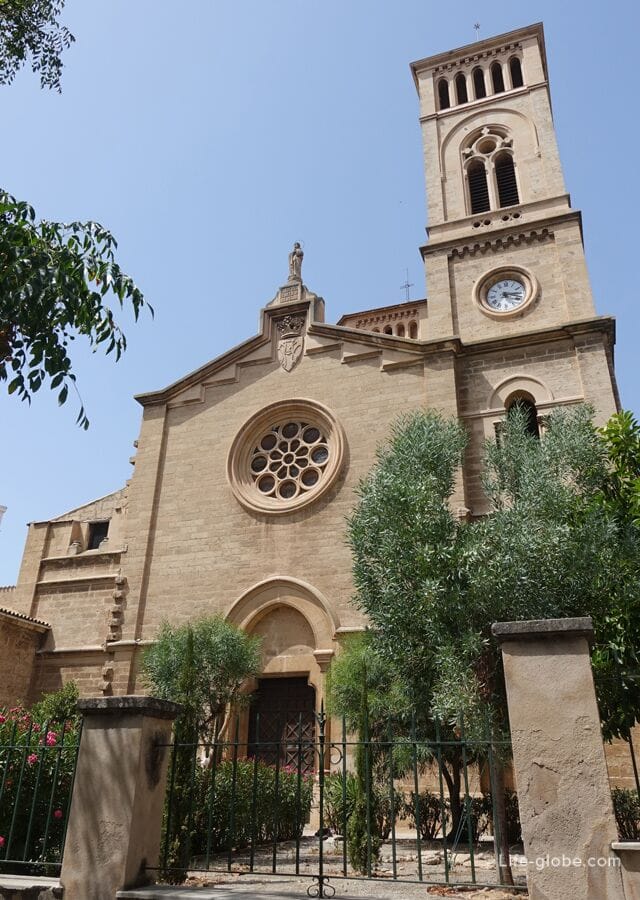 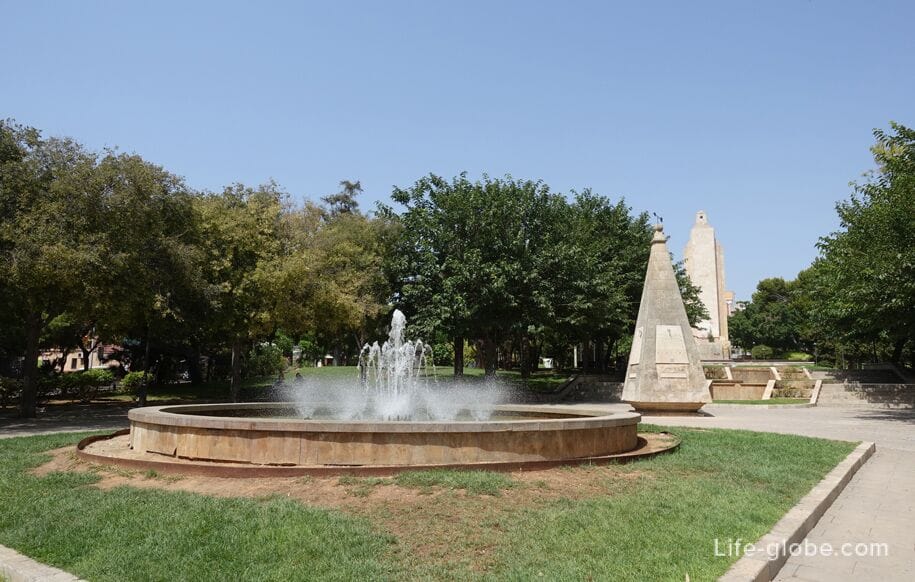 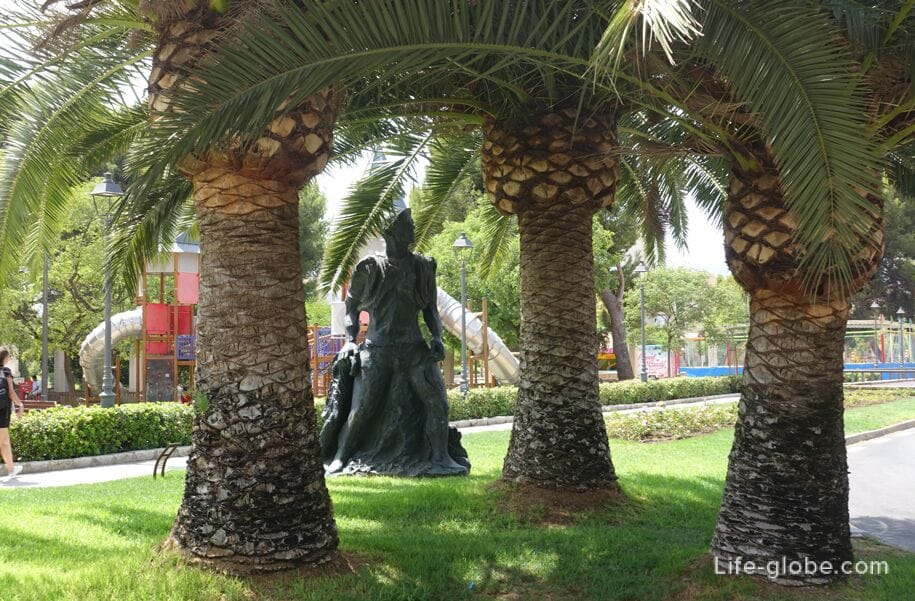 Photos of the Museum es Baluard - the Bastion of San Pedro 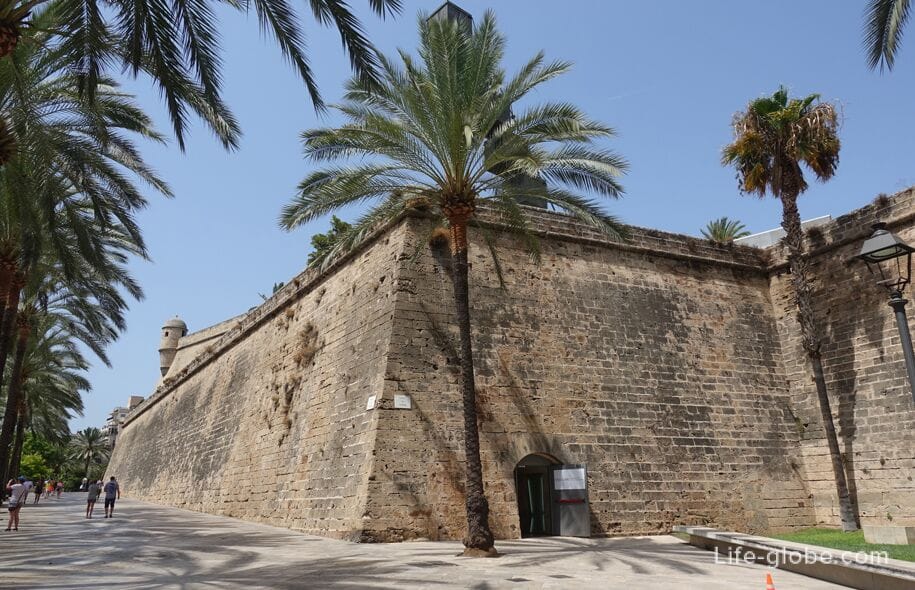 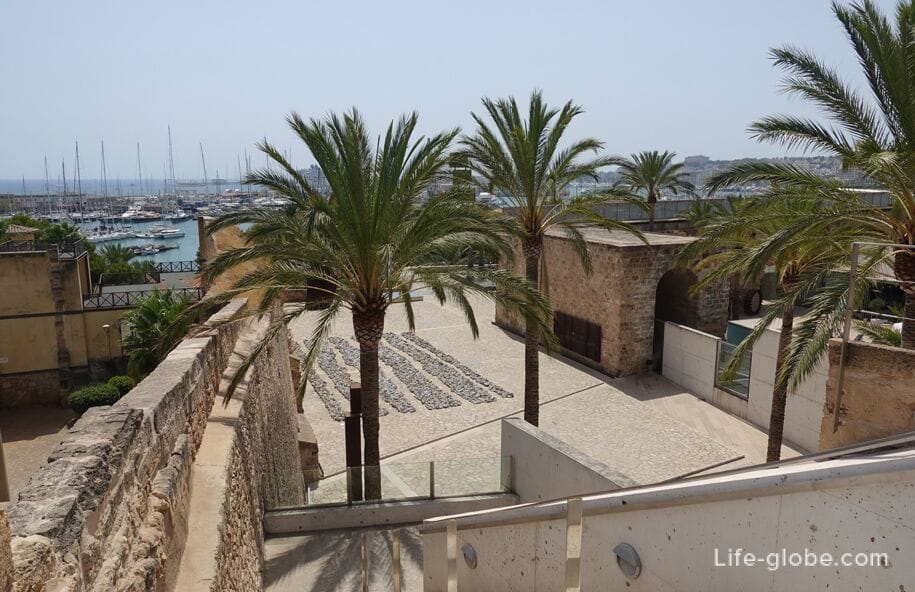 In addition to the above, in the area of Santa Catalina are also: the Church del Carmen (Parroquia Verge del Carme), cafes, bars and restaurants, shops and supermarkets, Bank, library, medical centre, post office, school, various agencies and hotels.

The areas of El Jonquet and Santa Catalina on the map

In the area Junket

The 4-star Hostal Cuba, on the rooftop terrace which has a cocktail bar with panoramic views of the sea and the city.

In hotel: restaurant, air-conditioned rooms with free Wi-Fi, a flat-screen satellite TV and a Minibar. The private bathrooms include a Hairdryer. 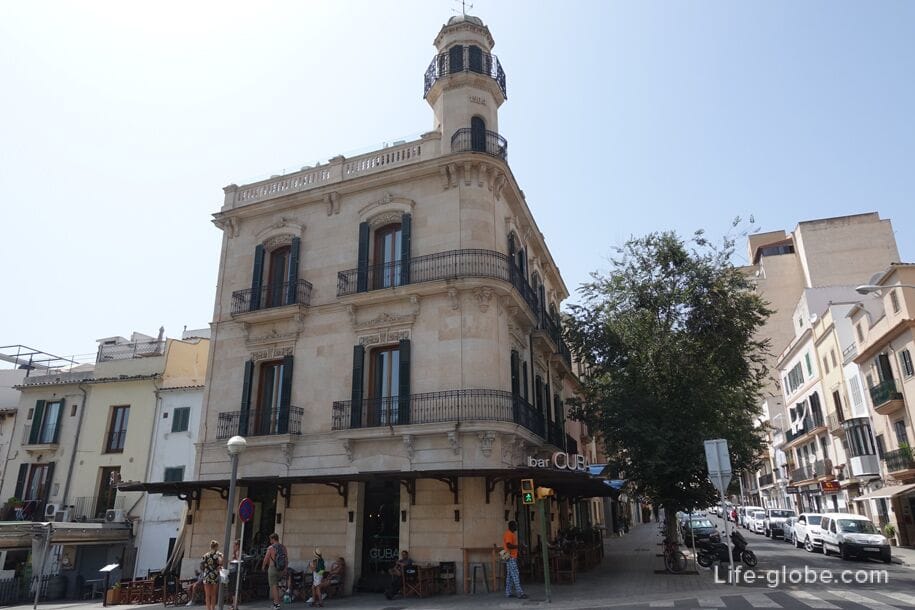 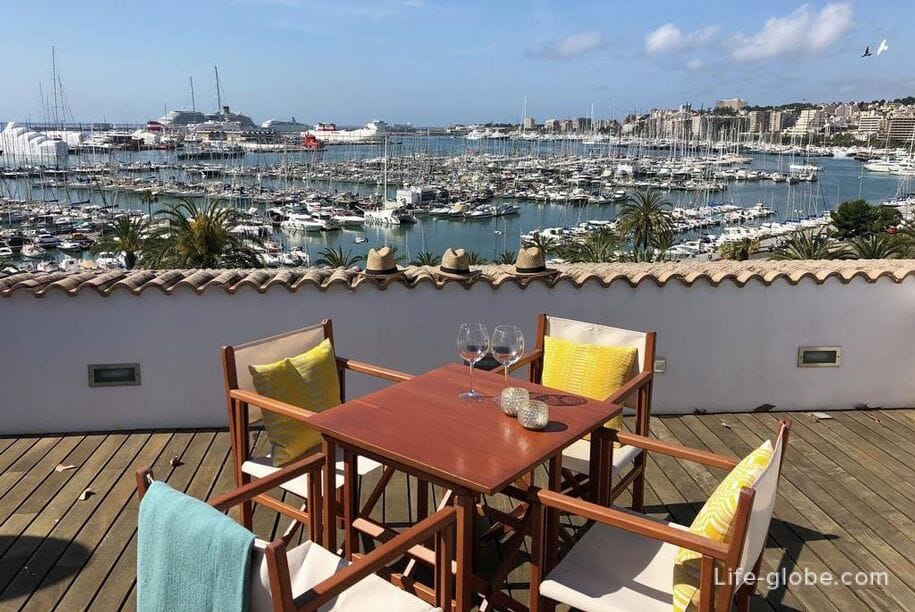 In the apartment: a bedroom, a kitchen with a dishwasher and a microwave, a flat-screen TV, a Seating area and 2 bathrooms. The link apartments 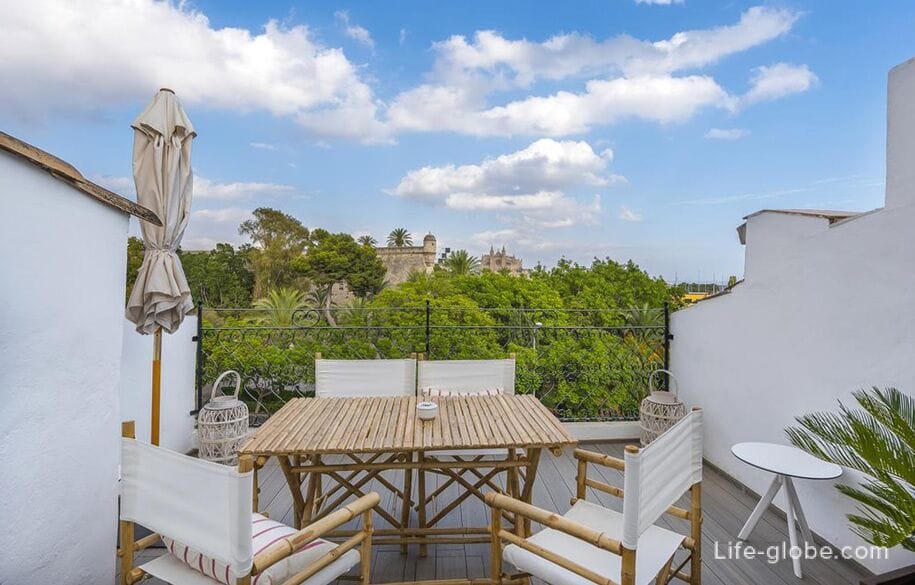 In the apartment: a bedroom, a flat-screen TV, a fully equipped kitchen, washing machine and a bathroom with shower. The link apartments 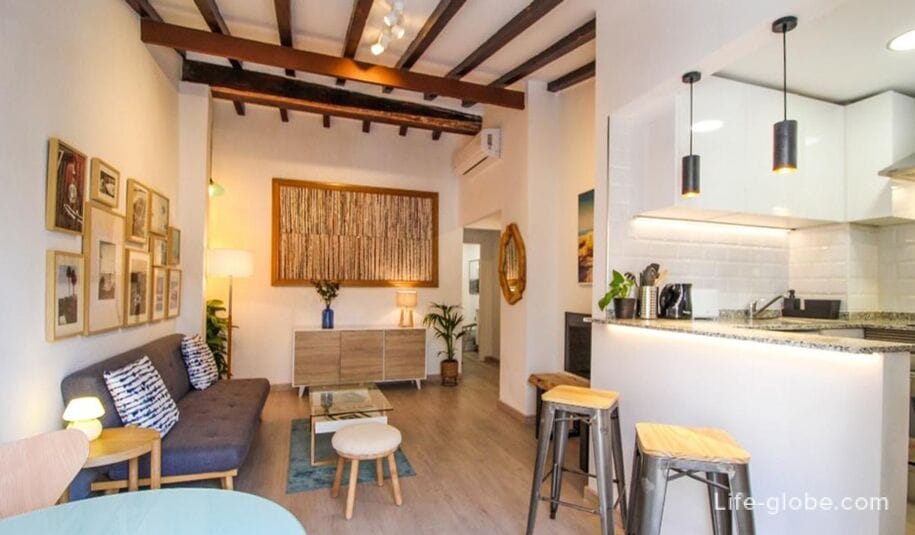 In the district of Santa Catalina

The apartment features parquet floors and a fully equipped kitchen with a dishwasher, a dining area, a flat-screen satellite TV and a private bathroom with a shower and Hairdryer.

Amenities include microwave, refrigerator, oven, kettle and coffee machine. Link to this Aparthotel 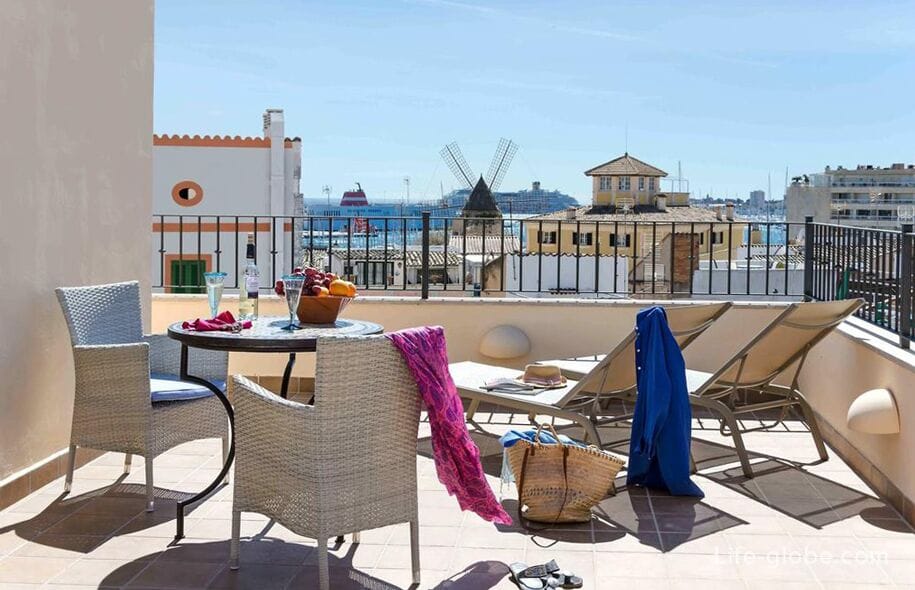 The rooms have a private bathroom and free Wi-Fi. Link to guest house 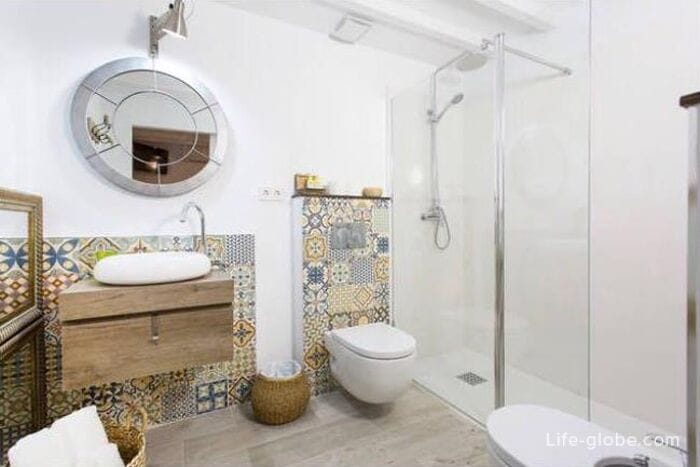 The Casa Borguny - House in the centre of Palma free Wi-Fi, a balcony, a terrace and barbecue facilities.

In the house: 2 bedrooms, living room, flat-screen TV, an equipped kitchen with a dining area and a bathroom with shower and washing machine. Link to the holiday home 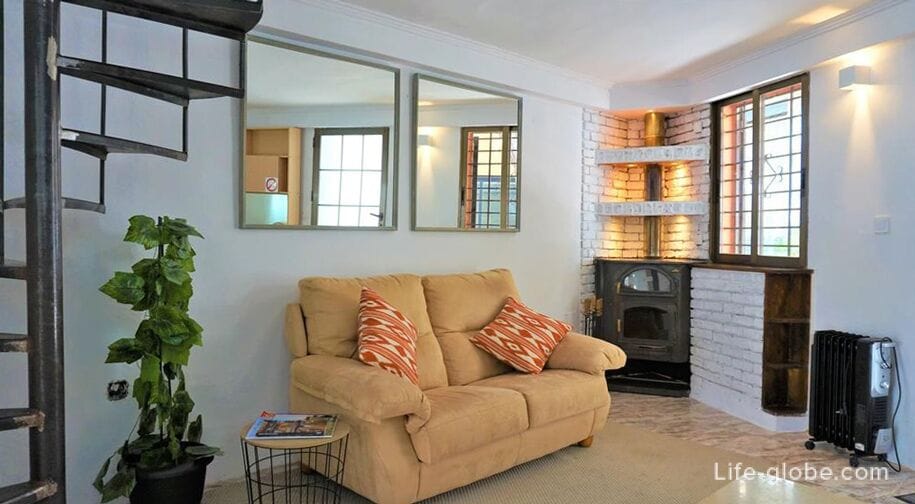 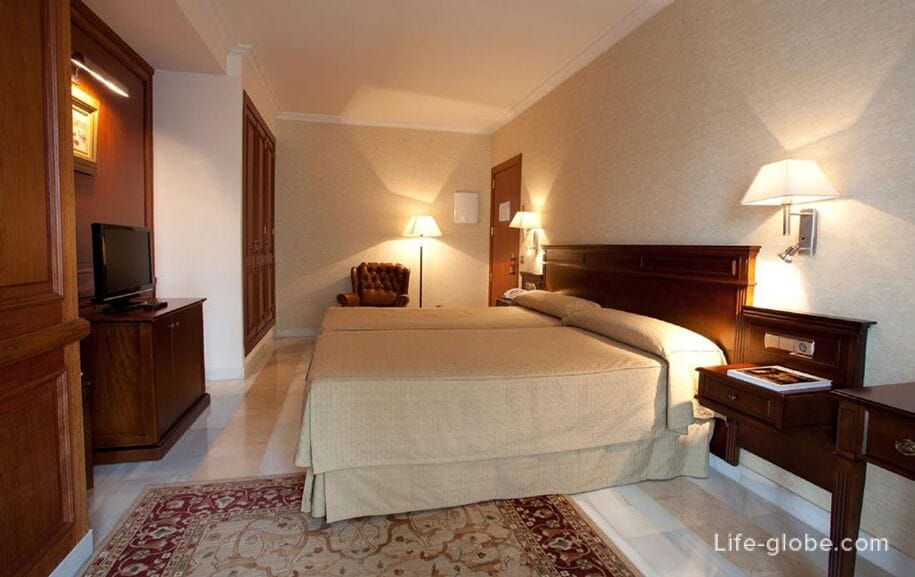 All accommodation in Palma de Mallorca, including in the areas of El Jonquet and Santa Catalina, you can view and book here