This beach is located in two municipalities - Agios Tychonas (West of beach) and Parekklisia (East), which is an Eastern suburb of Limassol.

On the West side of the beach of Santa Barbara is bordered by the walking path along the spectacular rocky coastline - beach Loures, with the East with the beach Parekklisia.

Santa Barbara beach has been awarded the "Blue flag" - a sign of cleanliness and quality of beaches and seawater.

The beach of Santa Barbara is quite long, but most of it has developed beach infrastructure.

In the Western part of the beach is mainly stone and pebble seaside. 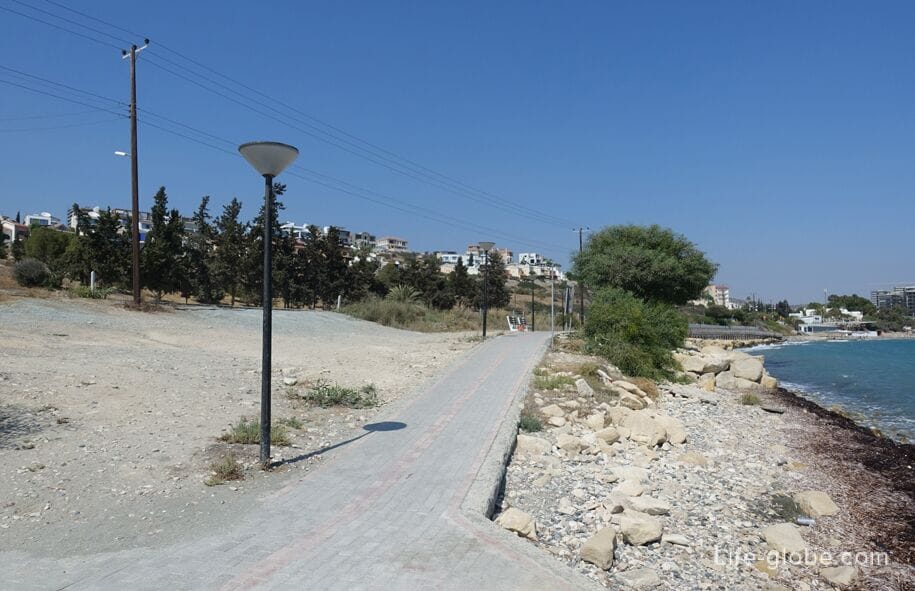 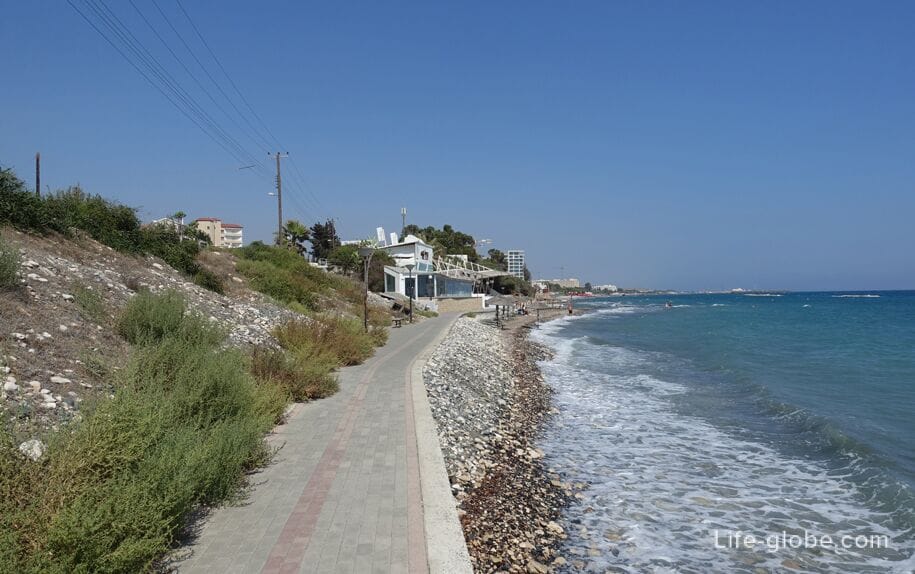 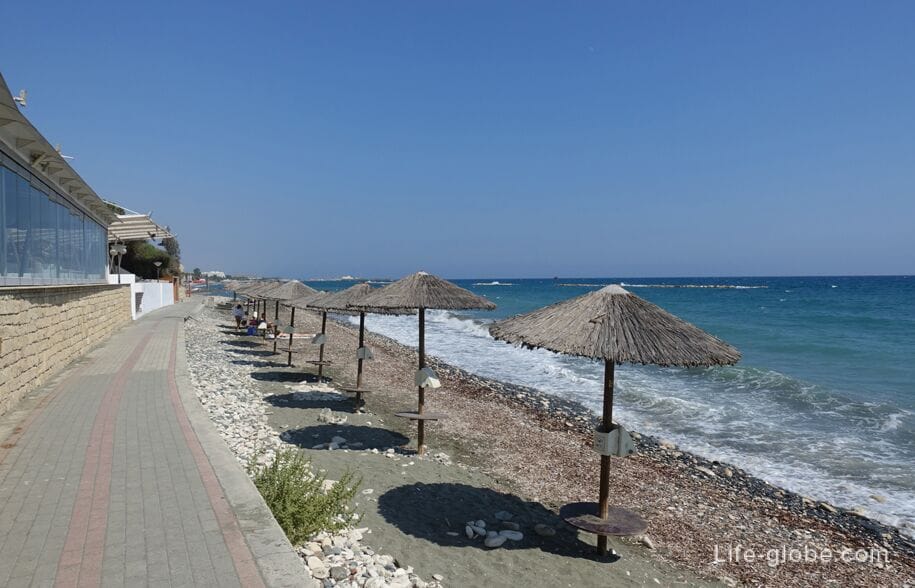 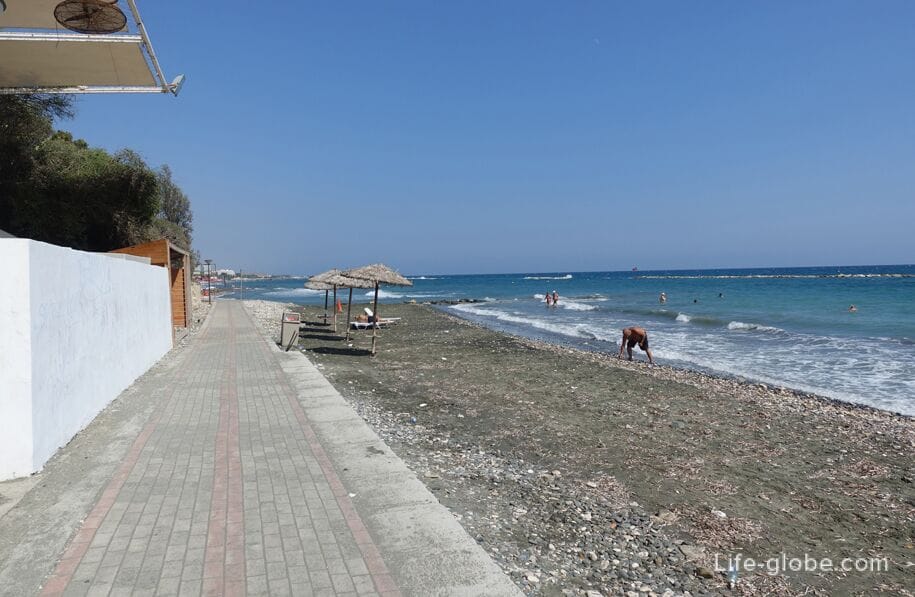 In the Eastern part of the beach belonging to the municipality of Agios Tychonas, is a 3-star hotel Atlantica Bay. On the beach, a dedicated area for sun loungers, sun umbrellas and water sports, lifeguards. 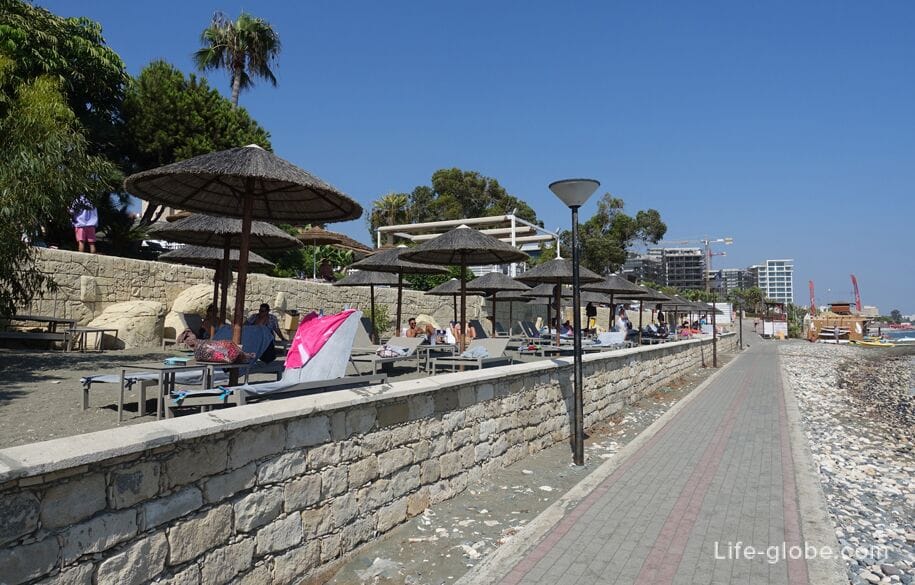 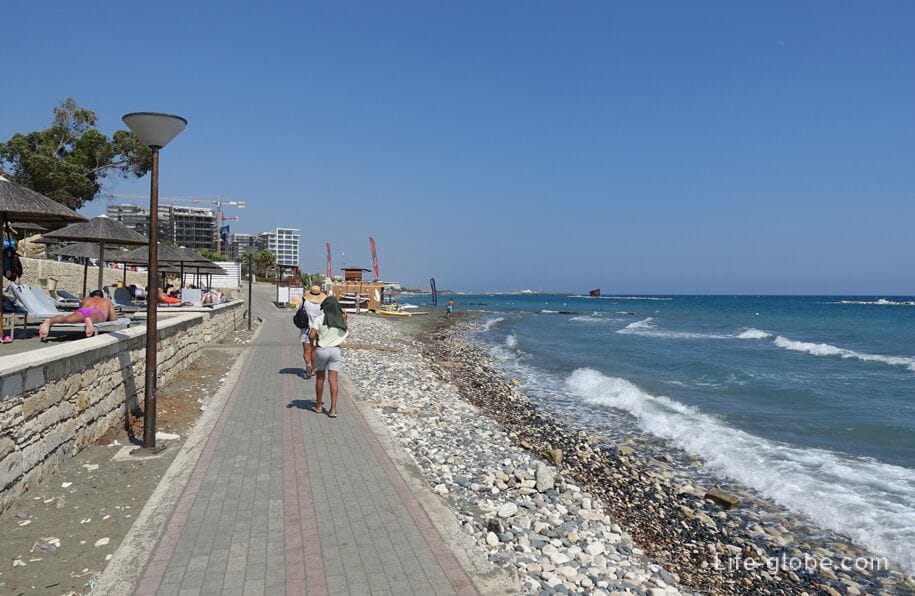 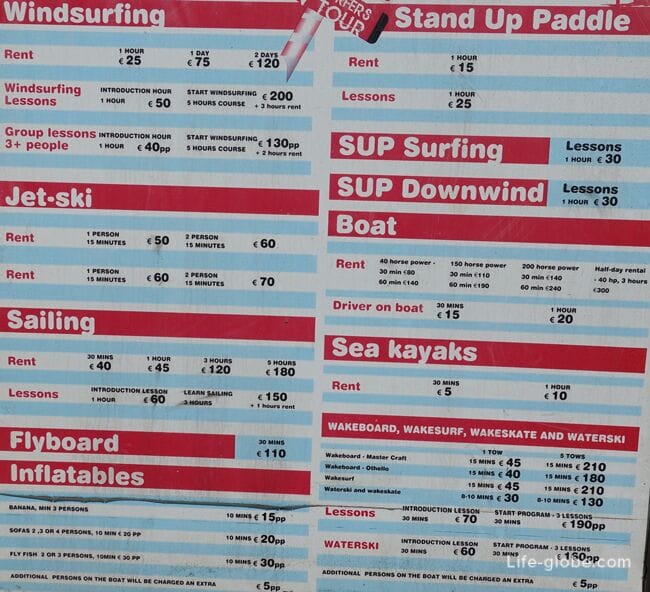 Beach coast of Santa Barbara next 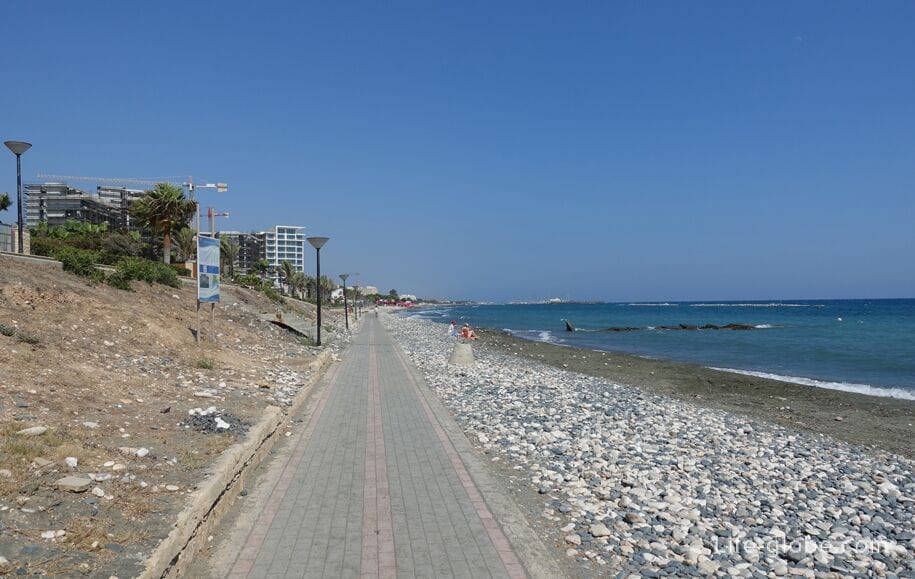 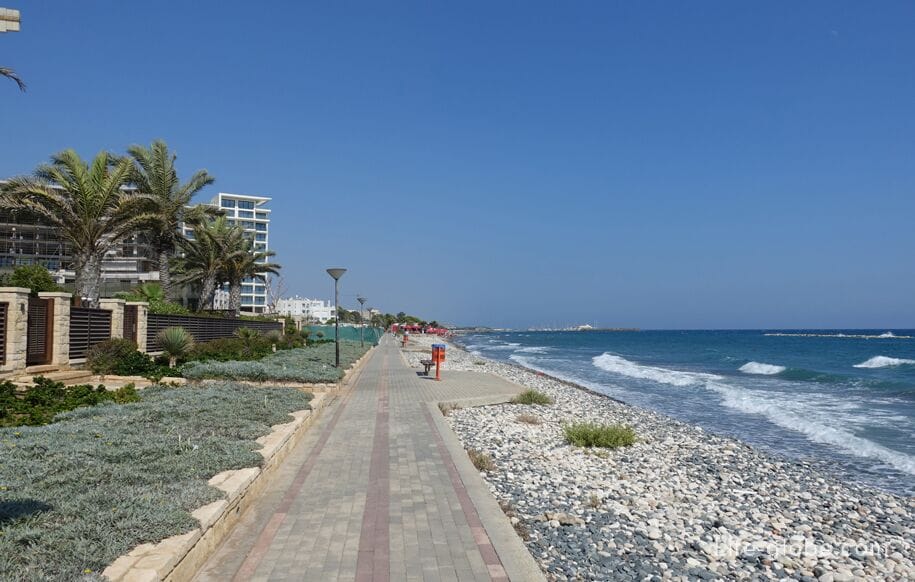 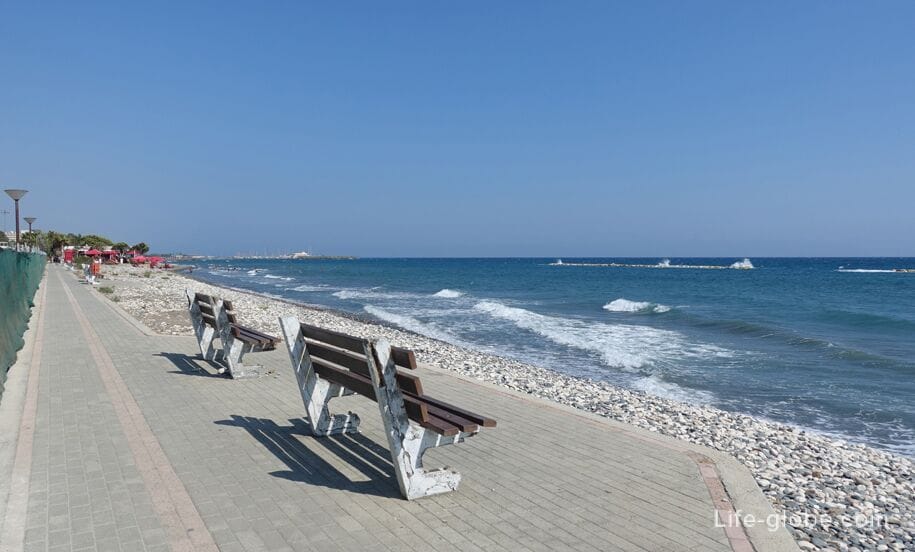 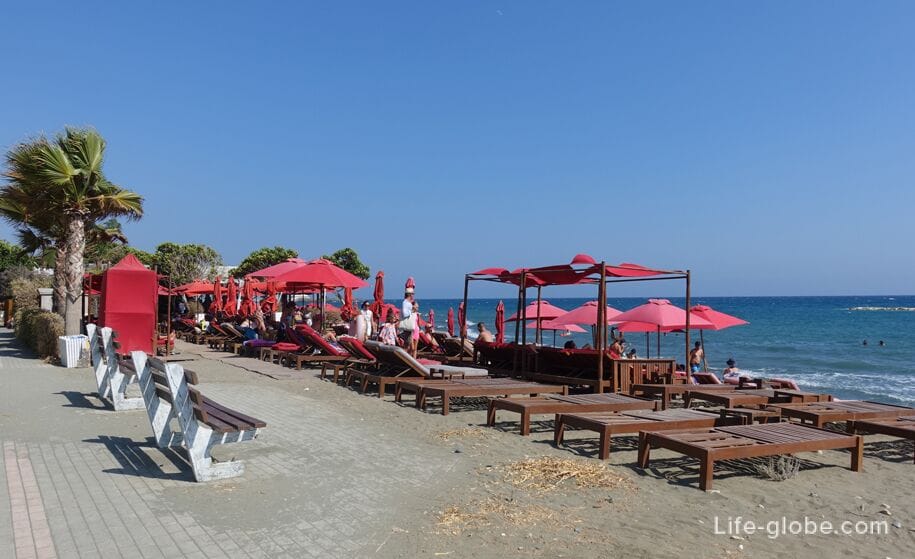 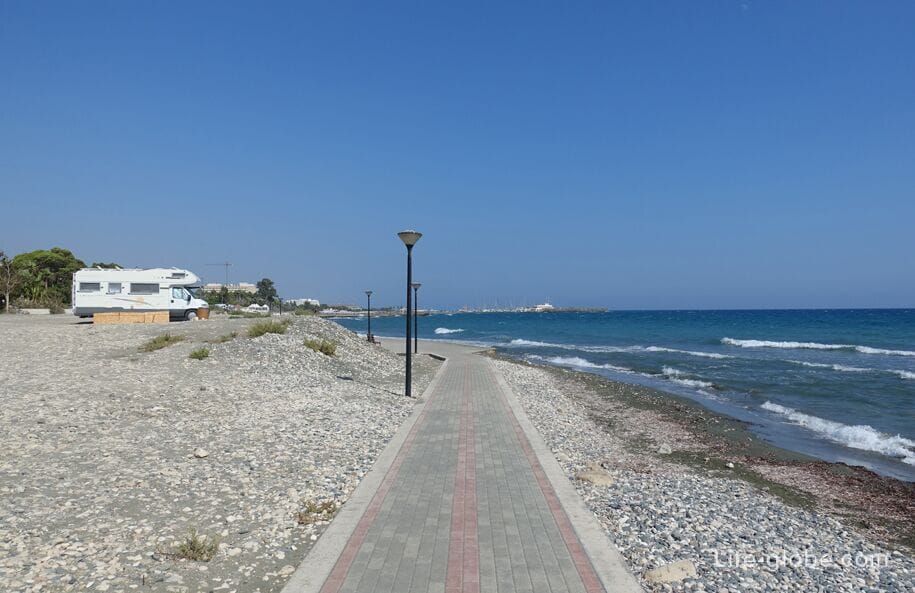 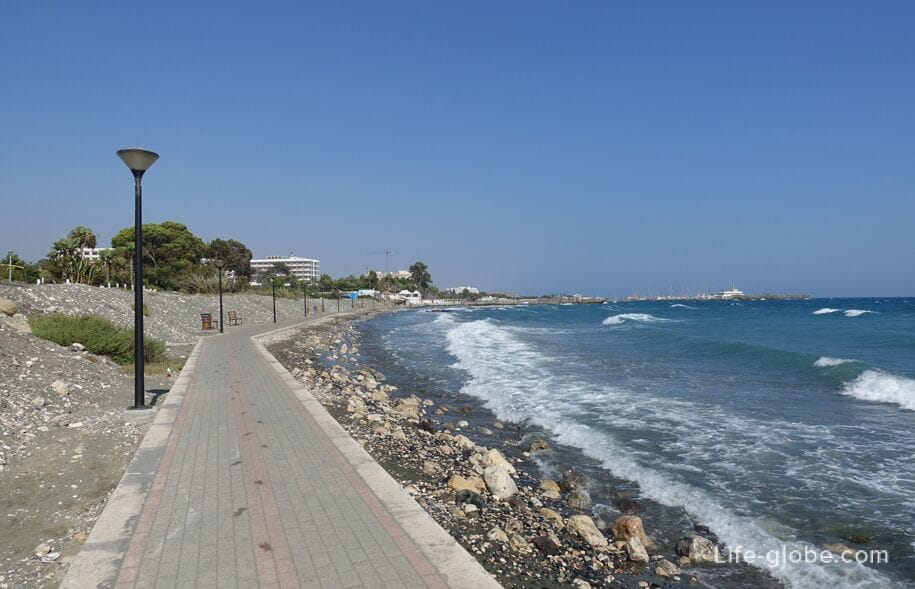 The Eastern extremity of the beach of Santa Barbara is the best place for a beach holiday in this part of the coast of Limassol.

The beach is wide and sandy, the sand is dark gray.

In the sea a stone breakwaters that protect the coast from large waves, however, there are often waves rise, especially in the second half of the day. The seabed is mostly sandy, with a convenient setting in water depth occurs rather abruptly.

There is a pier where you can take a stroll.

Facilities for a comfortable beach holiday includes: sun beds and umbrellas, showers and toilets, changing rooms and boxes, towers, lifeguards and a café. A dedicated area for beach and water sports and entertainment.

Lifeguards with lifesaving equipment and services for first aid are on duty on the beach from April to October from 09:00 to 17:00 hours to 18:00 hours in the peak summer season. The beach also has disabled access. 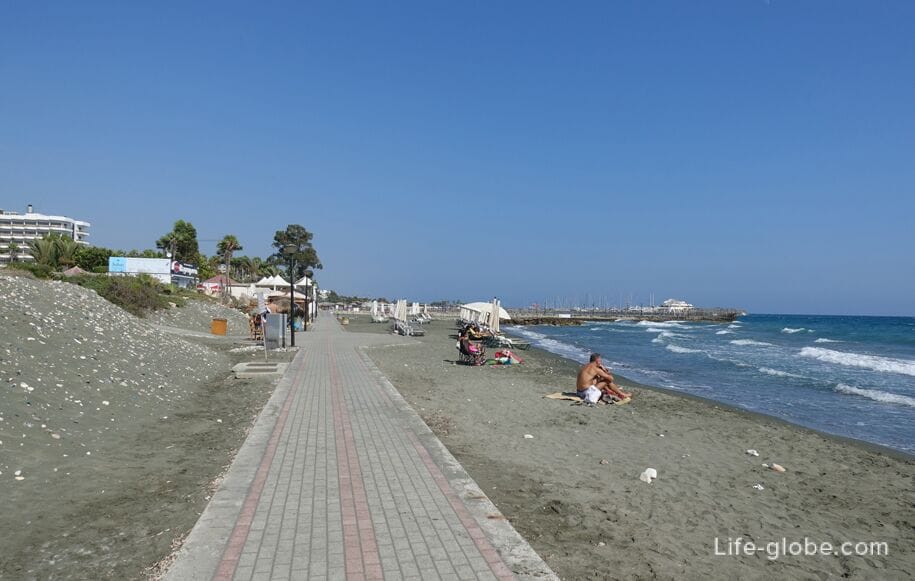 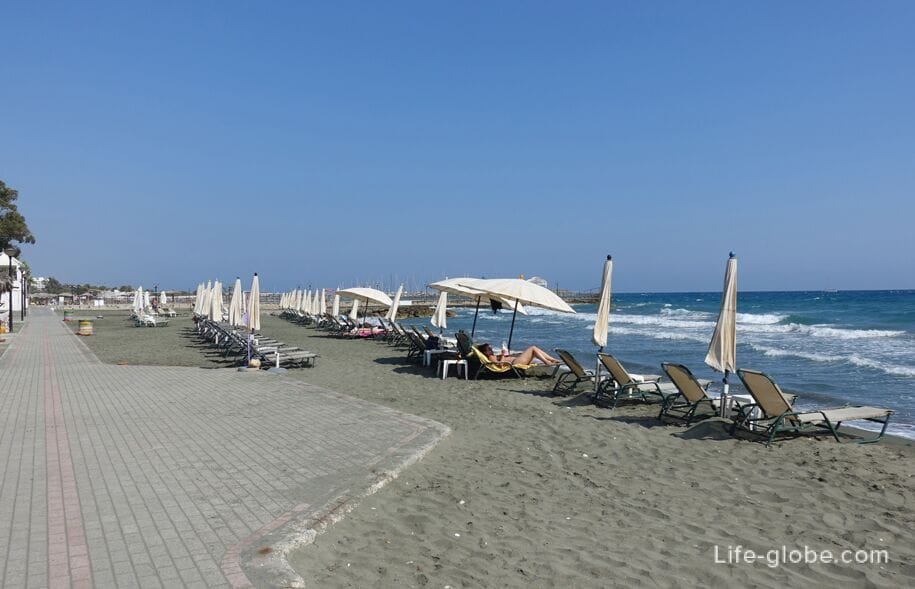 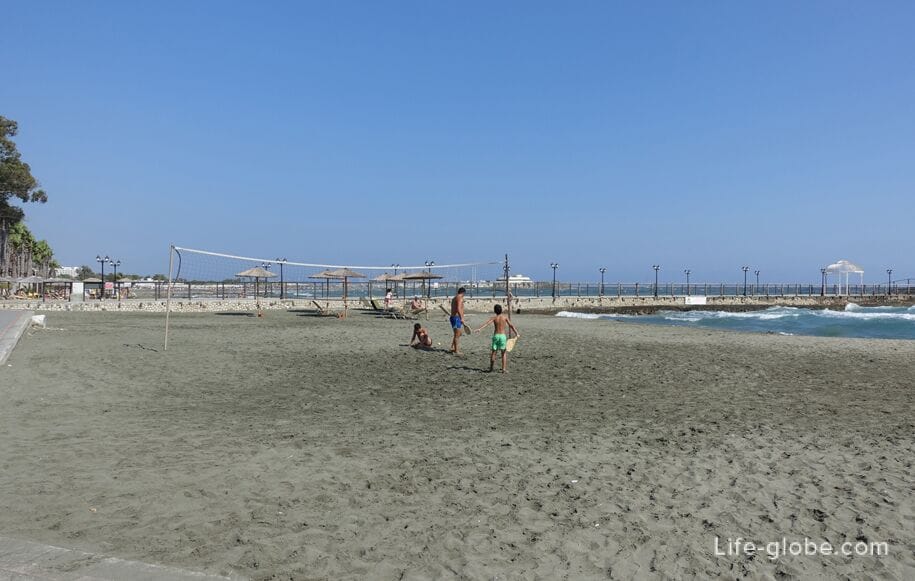 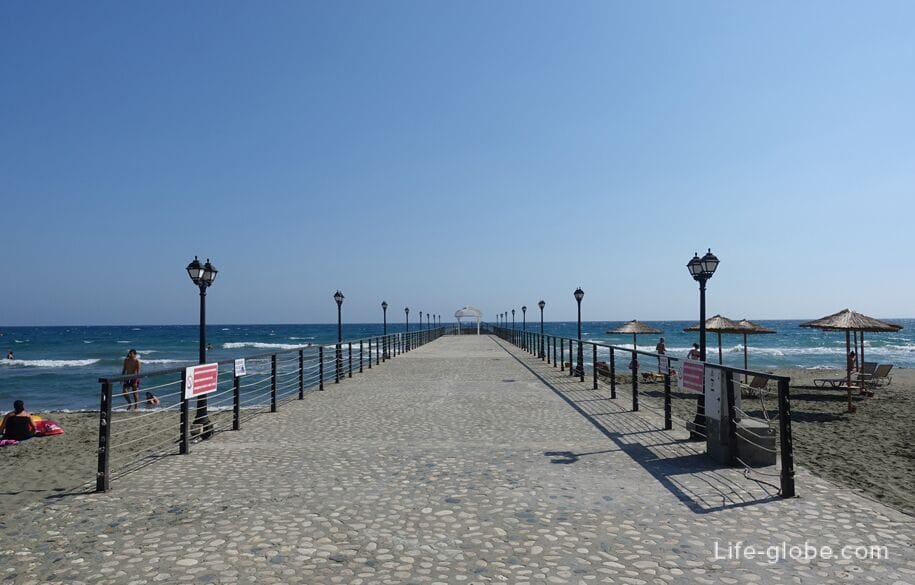 The main tourists at the beach are guests of the two hotels located directly near the beach and with direct beach access:

- The 4-star Elias Beach running on the system "all inclusive", with panoramic sea views, 2 swimming pools and a pool bar, a Spa and restaurants. 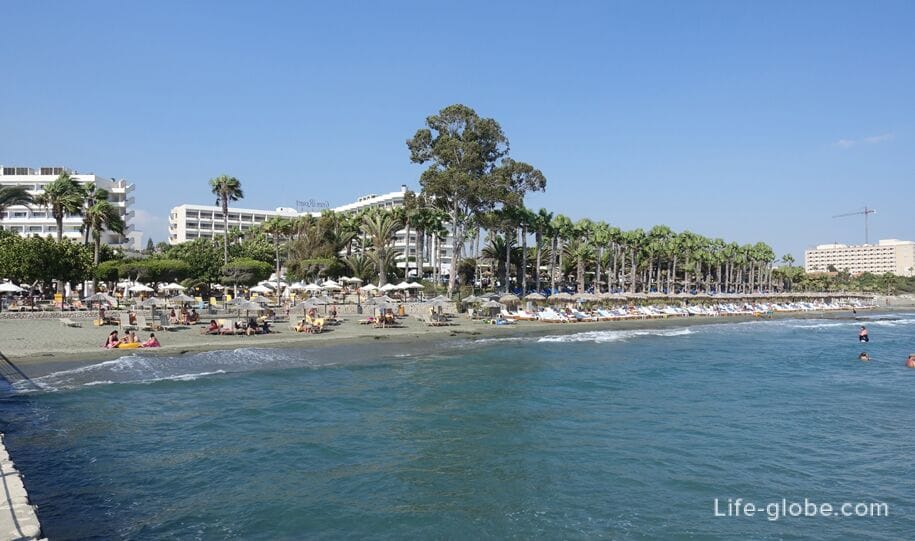 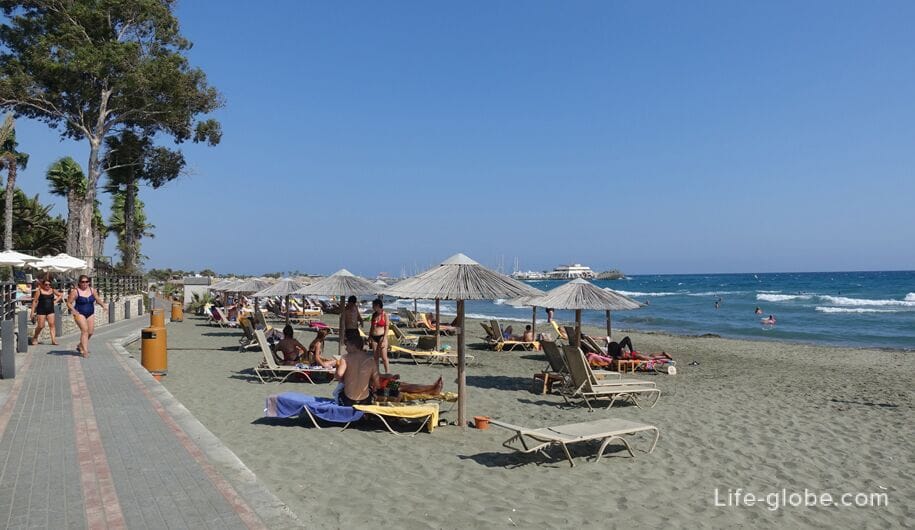 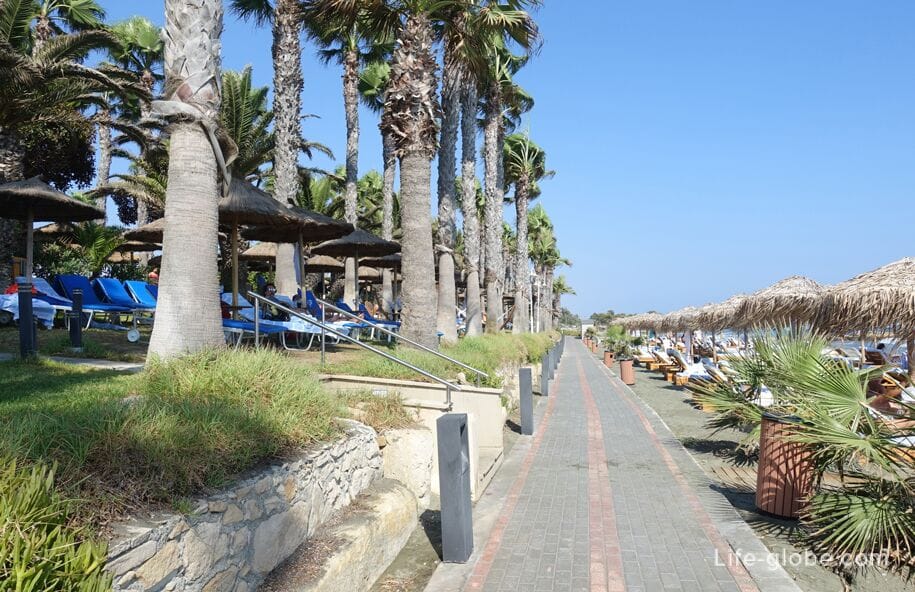 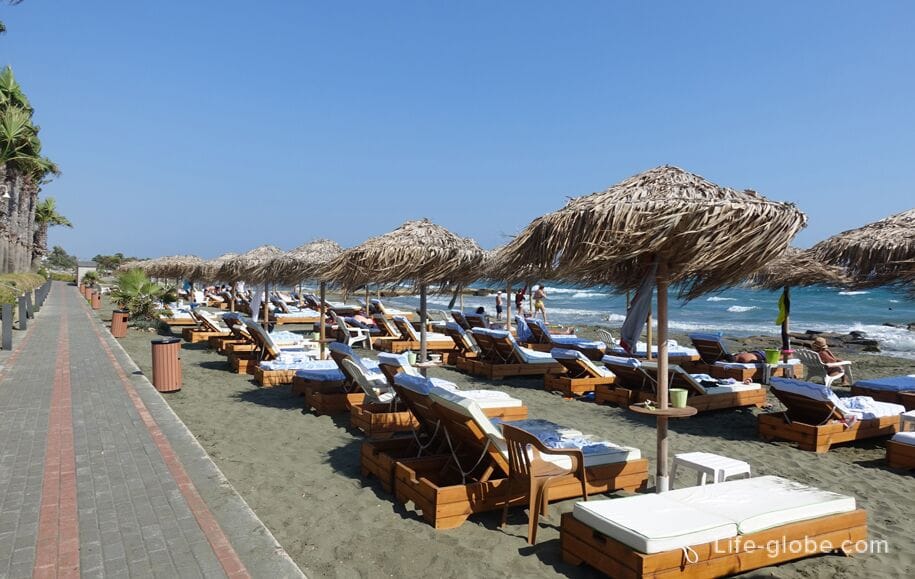 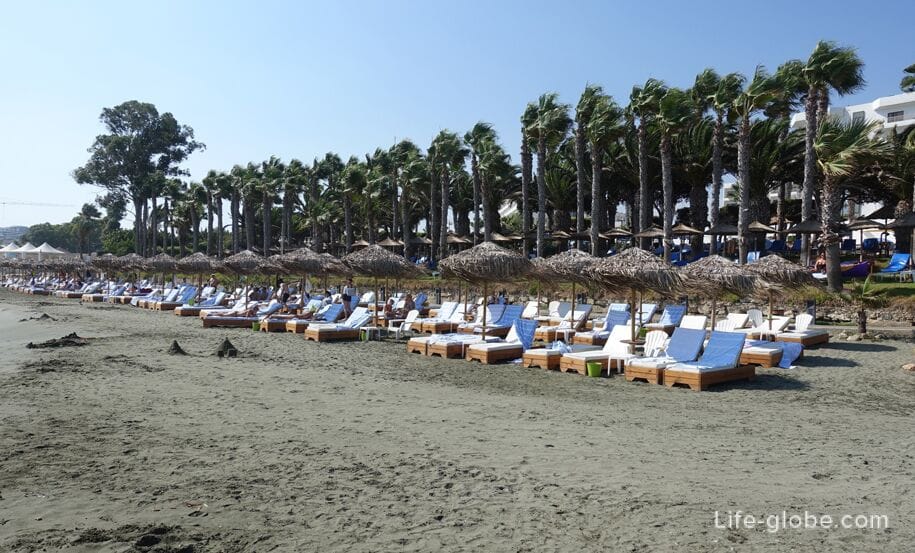 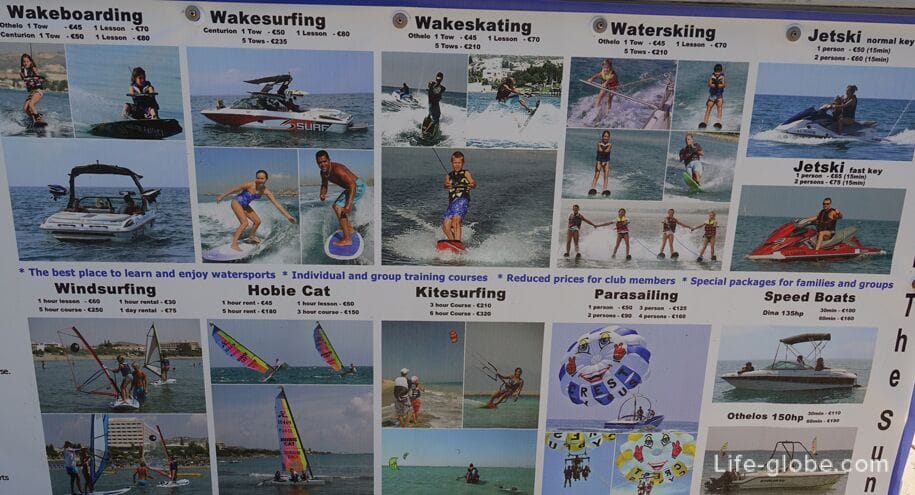 Also close to the beach of Santa Barbara, you can rent an apartment (full apartment):

- Kings Apartment with air conditioning, free Wi-Fi and free Parking on site. There is a dining area and a kitchen with a dishwasher, oven and microwave. Includes a flat-screen TV. Other facilities include an outdoor swimming pool. 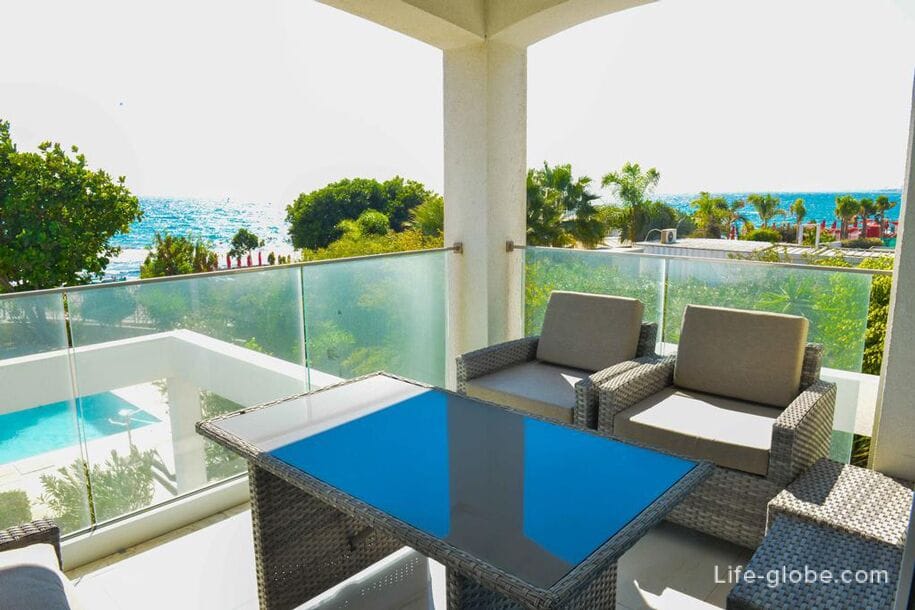 - Modern Studio Limassol Zypern with sea views, free Wi-Fi, a terrace and a garden. Apartment: 1 bedroom, a flat-screen satellite TV, a fully equipped kitchen with a microwave and refrigerator, air conditioning, Seating area, washing machine and a bathroom with shower. 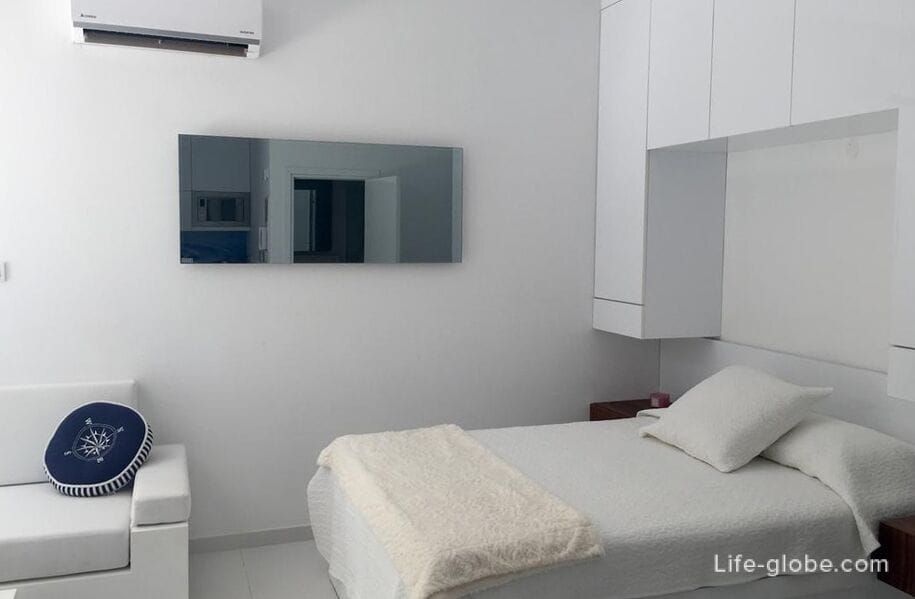 Along the beach of Santa Barbara is a coastal walking trail, which runs along the coast of Agios Tychonas and the municipality of Paphos (to the municipality of Pyrgos). The length of the road is just over 5 miles away, it is possible to reach the ancient ruins of Amathus. The ruins and the Acropolis of Amathus is located to the West along the coast from the beach of Santa Barbara. 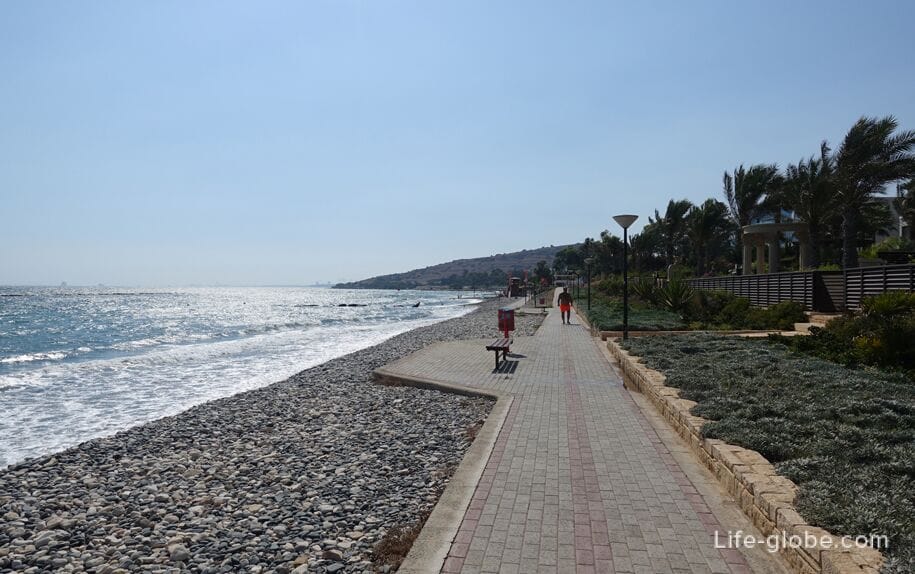 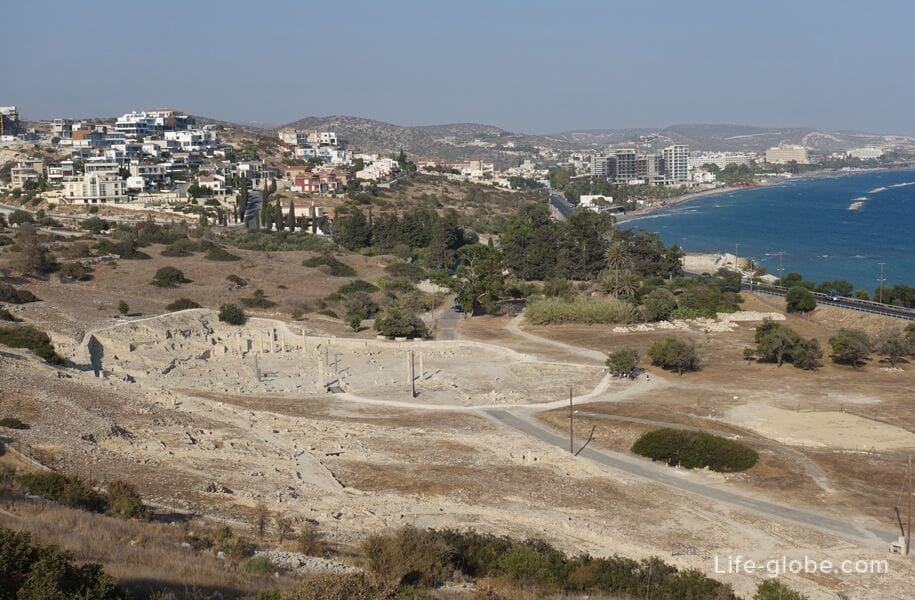 How to get to the beach of Santa Barbara in Limassol

The above line of coast footpath and road Amathountos (B1) along which public transport plying in the centre of Limassol and next along the Eastern coast area of Limassol.

Here stops 30 bus linking the shopping center MY MALL Limassol with the municipality of Pyrgos. The fare is € 1.50. A day ticket is 5 Euro.

Distance from the historical centre of Limassol (old port, promenade of Molos of Limassol and the castle) to the Eastern part of the beach of Santa Barbara is about 11 to 11.5 kilometers.

From airports Paphos or Larnaca can be reached by public buses to the centre of Limassol, or straight to the hotel in a rented car or taxi. Car hire in Cyprus...

Book a taxi/Shuttle service is possible in advance, even from home. At any time of the day, at the airport, you will meet your driver with a sign, which will be written your name and surname. For taxi is enough to tell us your flight details! Find out the cost and order a taxi here... 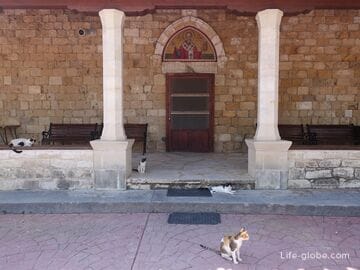 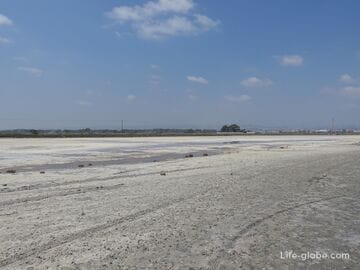 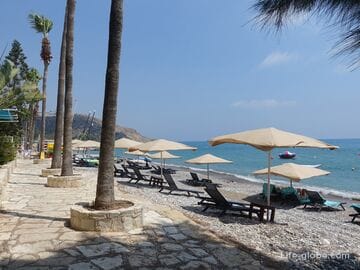