Villa Durazzo complex - one of the attractions of the resort town of Santa Margherita Ligure, which includes two majestic historic houses, one of which is a Museum and an Italian Park-garden.

The Villa is located on a hilltop near the port of Santa Margherita, Via S. Francesco D'Assisi, 3.

Villa Durazzo, the full name of Villa Durazzo-Centurione is typical of the Alessian square building, erected in 1678 as a summer home for the family Durazzo and passed to the princes of the Centurions in 1821 (hence the double name "Durazzo-Centurion"), after which the house was extended and converted.

Initially, the structure was inside a defensive structure created from the middle of the sixteenth century against barbaric raids and enemies. Originally property of the doge Giovanni Luca Chiavari, built on the ruins of a Roman construction of the 3rd century AD.C., it looked like fortified castle.

In 1678, when the destroyed "castle" was demolished, the restoration and radical reconstruction of the existing building in the style of the famous architect Galeazzo Alessi was carried out.

In the 19th century the building underwent various changes, and adjacent to the Villa, the garden became more refined. In 1892, to celebrate Colombia Villa was temporarily transformed into Grand hotel, within the walls of which stayed many famous people, such as Prince Vid and the Queen of Italy.

In 1919, the property was bought by Alfredo Chierichetti, who added exotic plants in the garden, paved paths, statues and flowers. In the end, in 1973 his heirs sold the complex to the city council of Santa Margherita, as a result of which the villa became a municipal property, where they held important cultural events and international congresses. 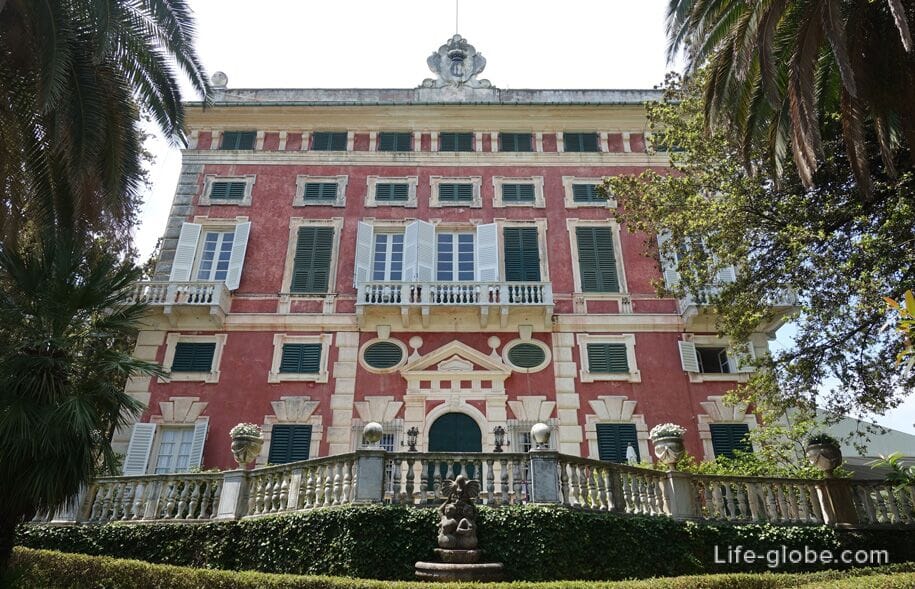 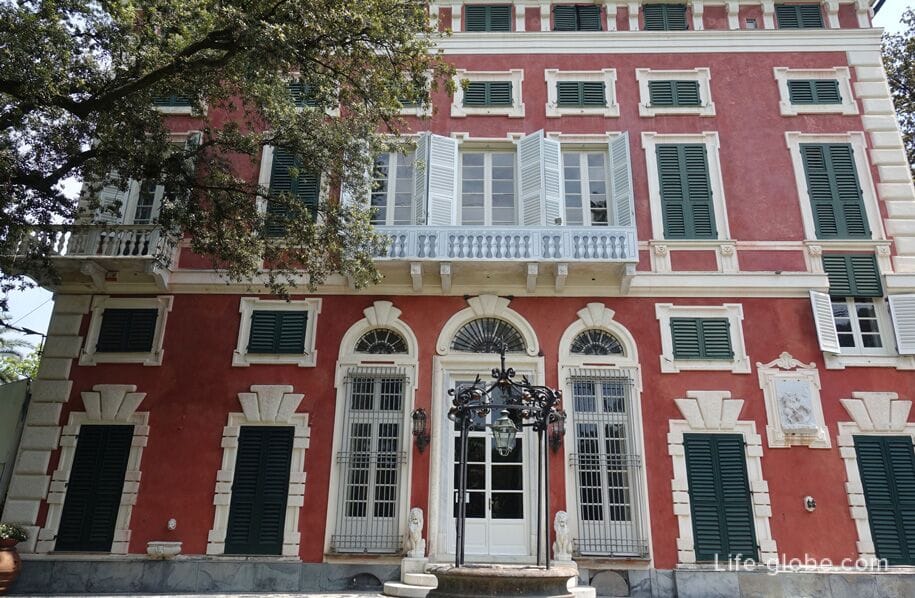 The terrace in front of the villa which is laid out by black-and-white pebble with a flower pattern was created at the beginning of the twentieth century of Giovanni Franchesketti in style and using the technique of "risseu" (the Genoa stone blocks), typical Ligurian paving with use of stones. 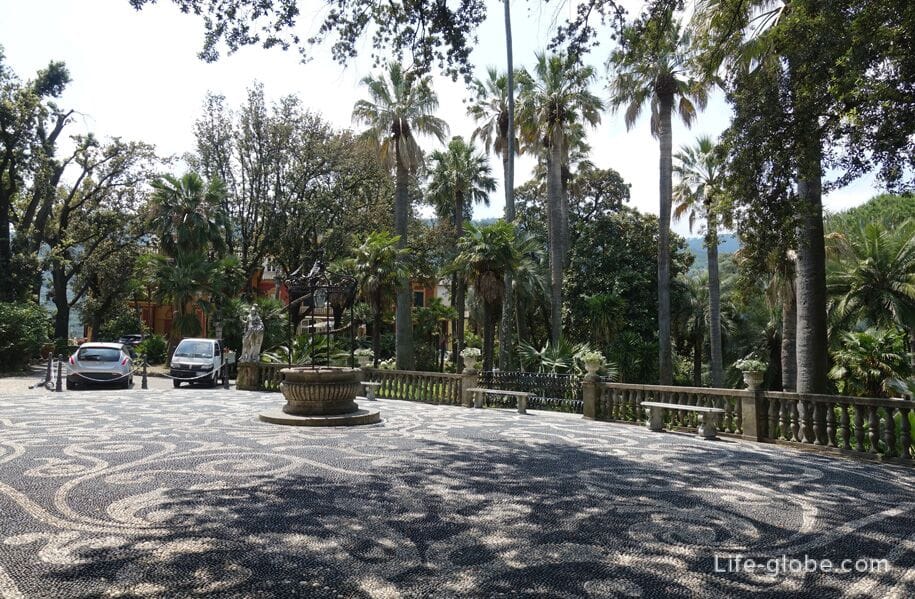 The Museum of the Villa Durazzo

Currently, the walls of the Villa is an art museum where you can visit the rooms and halls of the Villa, including a bedroom, where her Majesty Queen Margarita arrived as a guest in 1904.

The Villa is notable for the fireplace room, furnished with gilded furniture in the style of Napoleon I, where there is a fireplace covered with majolica tiles.

Room Loggiato Mare with views of the coast and the port of Santa Margherita. Frescoed with allegories of the four seasons, the hall contains a small noble chapel that is entirely frescoed. Next to the chapel, on the wall, there is a mirror with wood frame decorated with floral motif  (XVIII century).

Vietri Parlour - antique dining room with neoclassical style frescoes and majolica floors from the 18th century, and the Vaymer Hall that, together with its Louis XVI furnishings, contains valuable works by Gio Enrico Vaymer that portray members of the Centurione family.

Also in the villa you can see: various antique furniture, paintings by famous artists, frescoes of the 17th and 18th centuries, large chandeliers made of crystal and Murano glass, mirrors, ceramics and Chinese dishes. 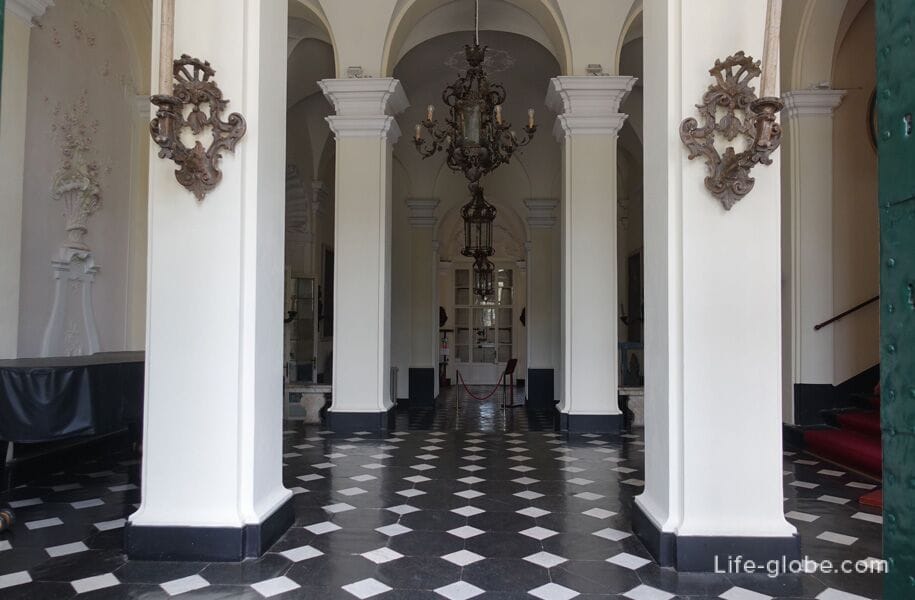 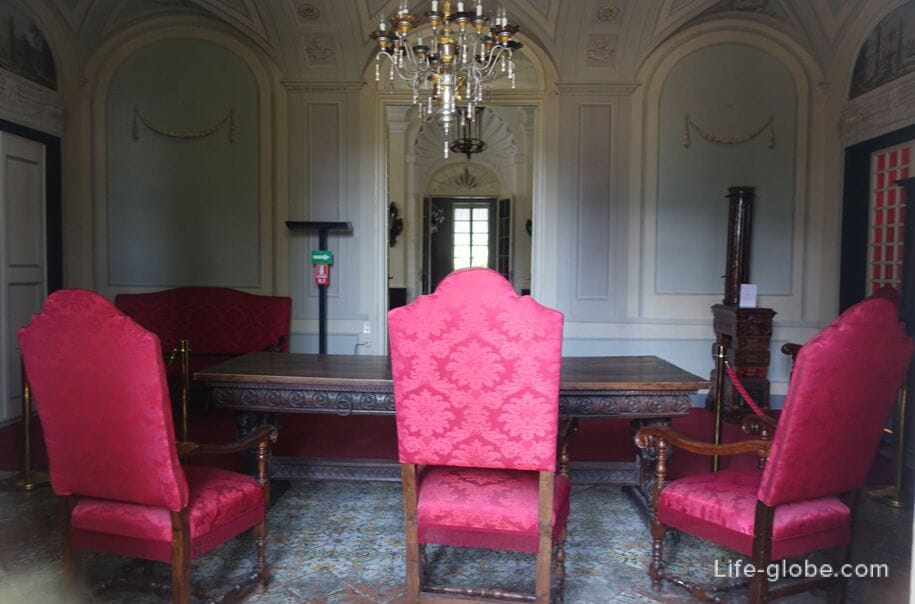 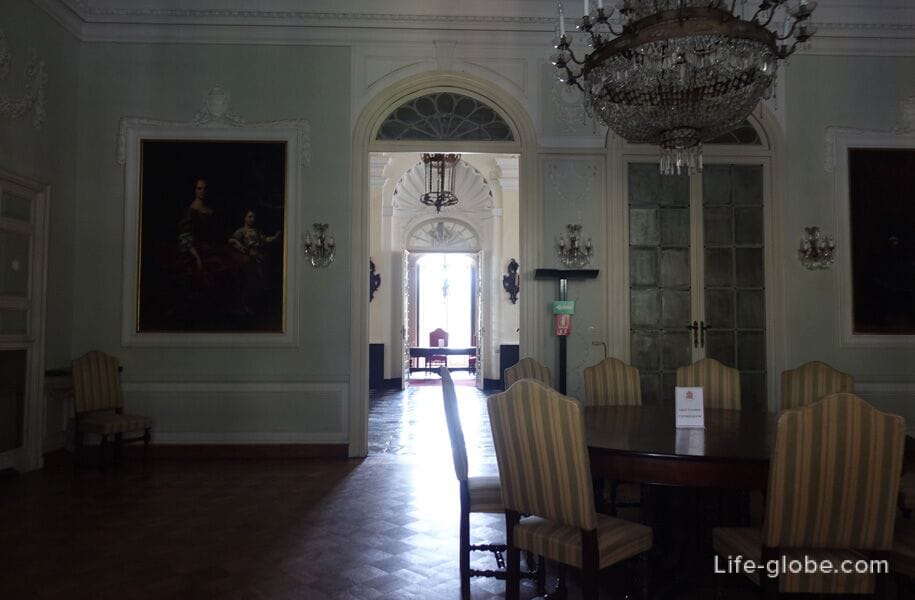 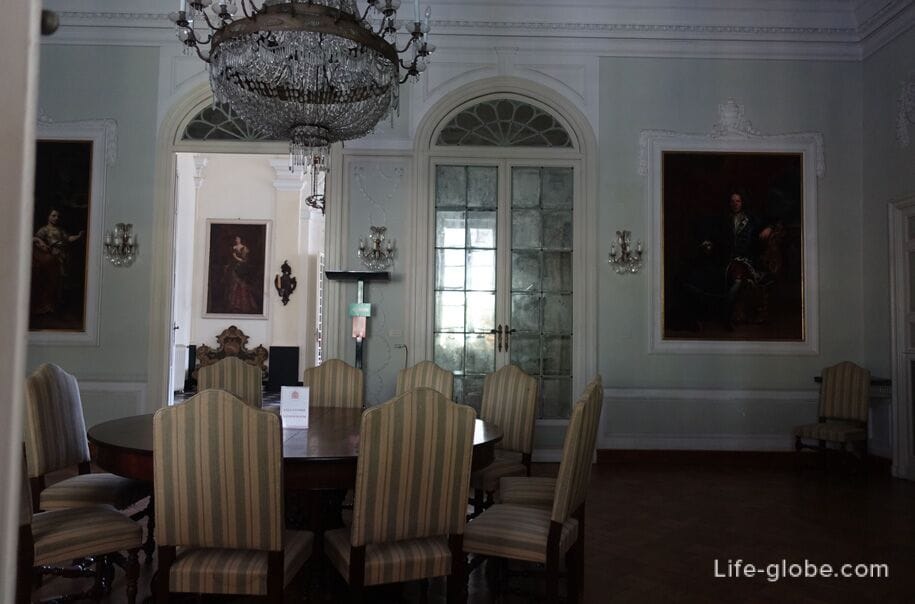 Villa Durazzo is located in the garden surrounding the building from all sides.

Park Villa Durazzo - one of the most beautiful places in the city for walking and recreation.

The garden of the villa is equipped with terraces, walking paths, places for recreation. The garden features an abundance of greenery and flowers, neoclassical marble statues and a small fountain inhabited by fishes and turtles.

Since the end of 2006 the Garden of Villa Durazzo, for its beauty, history and originality, has been included in the circuit of "Great Italian Gardens". 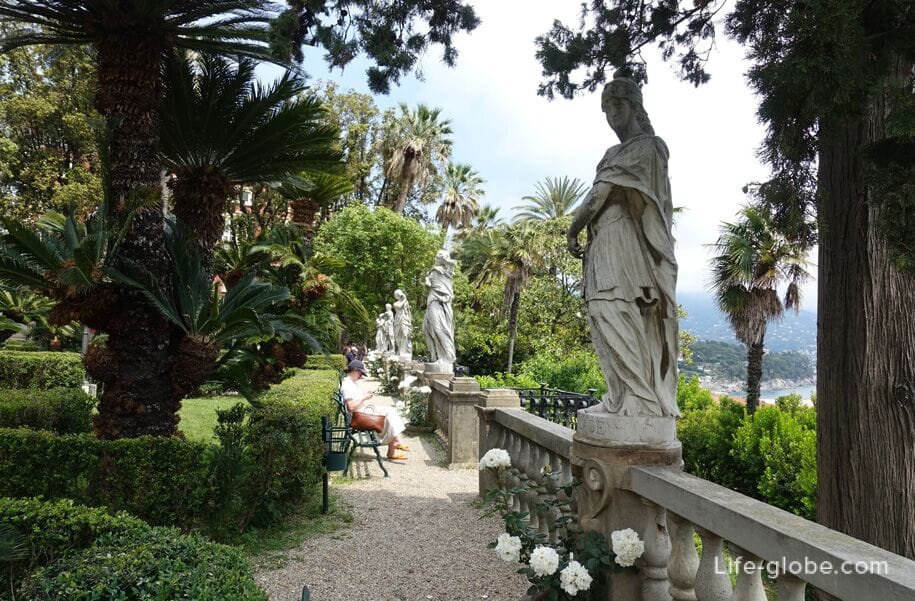 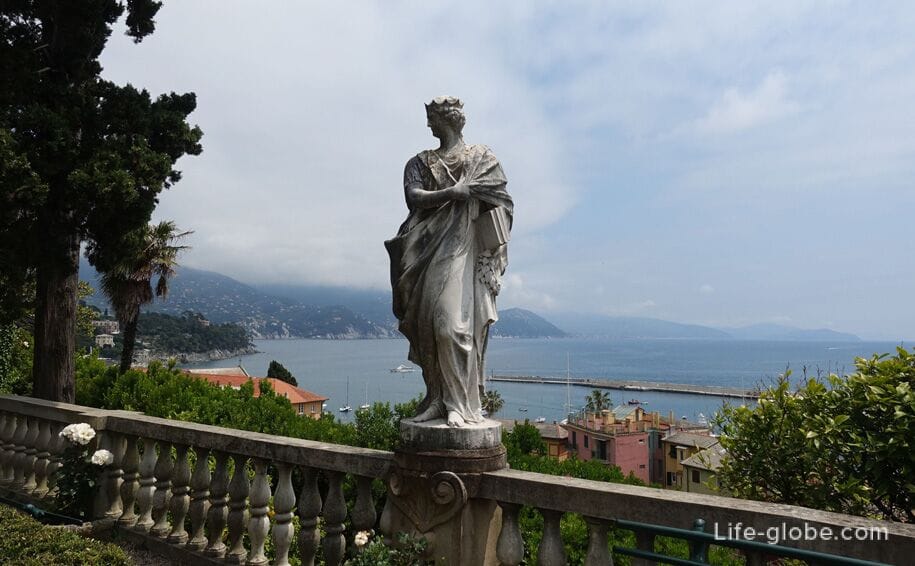 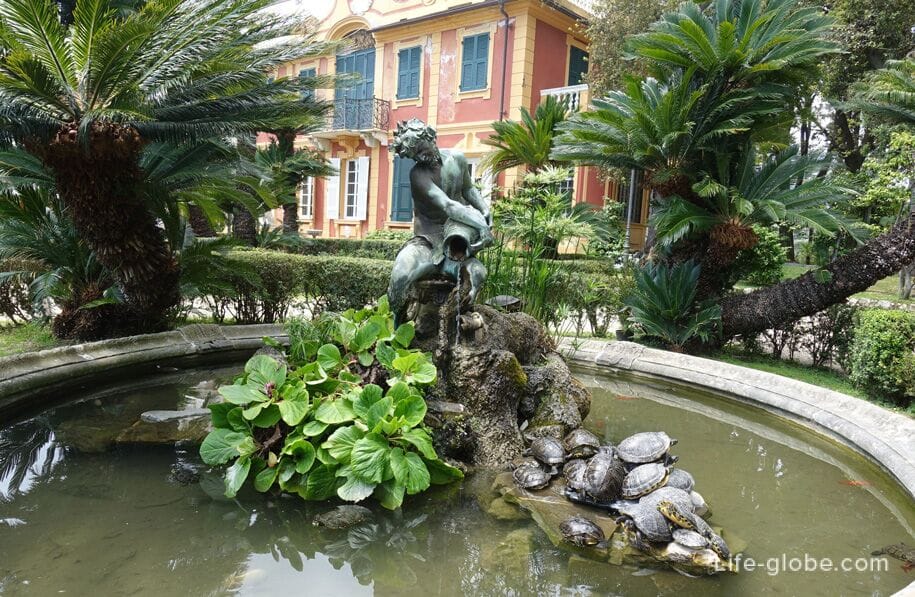 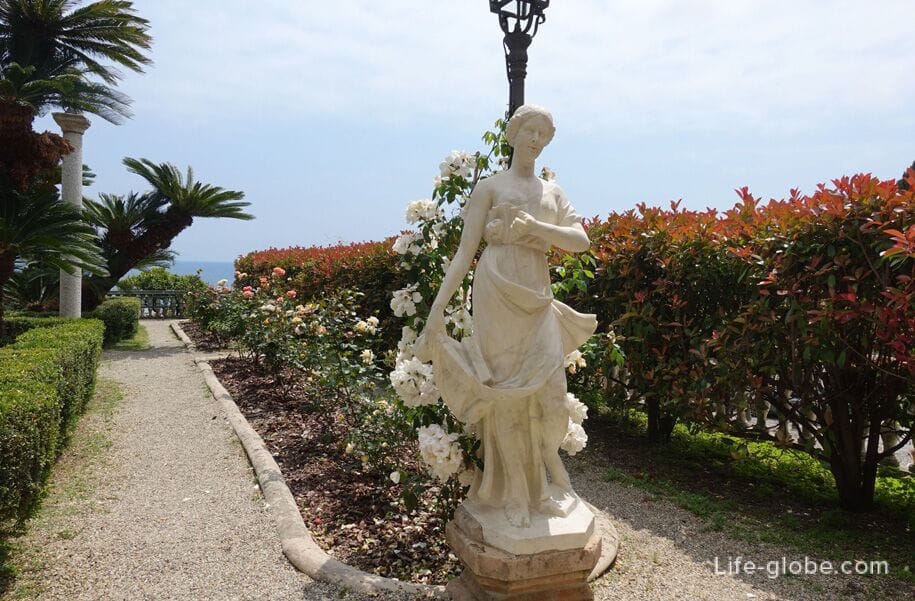 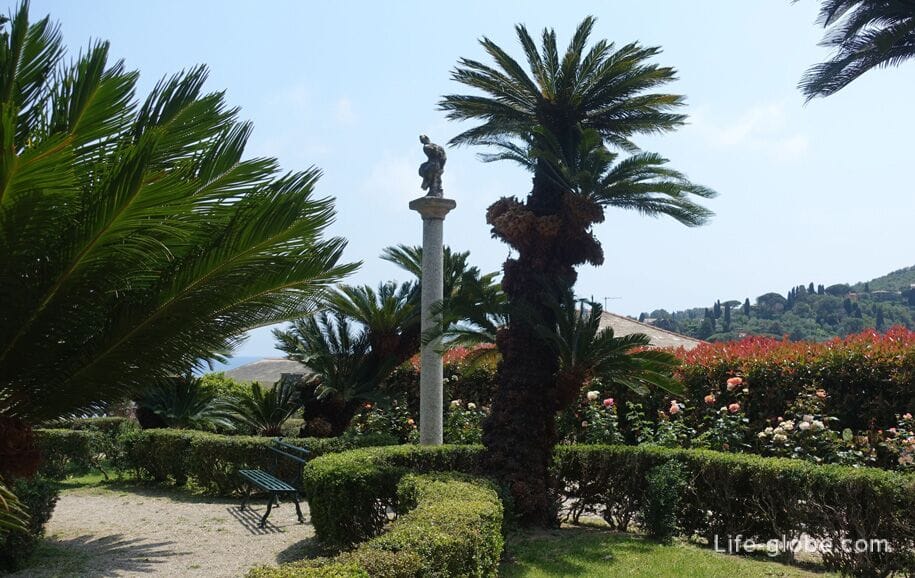 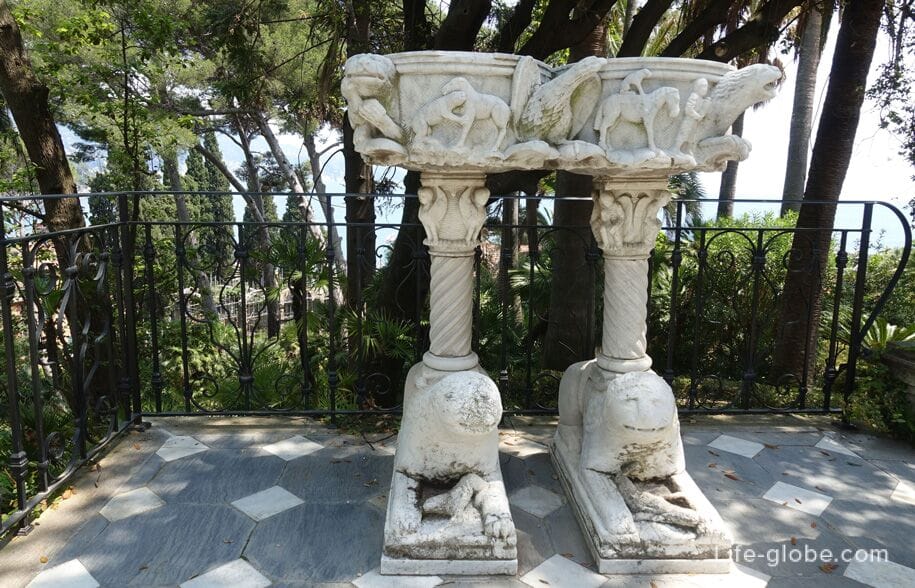 From the garden of the Villa Durazzo panoramic views of the port and the city, and the coast and marine waters. 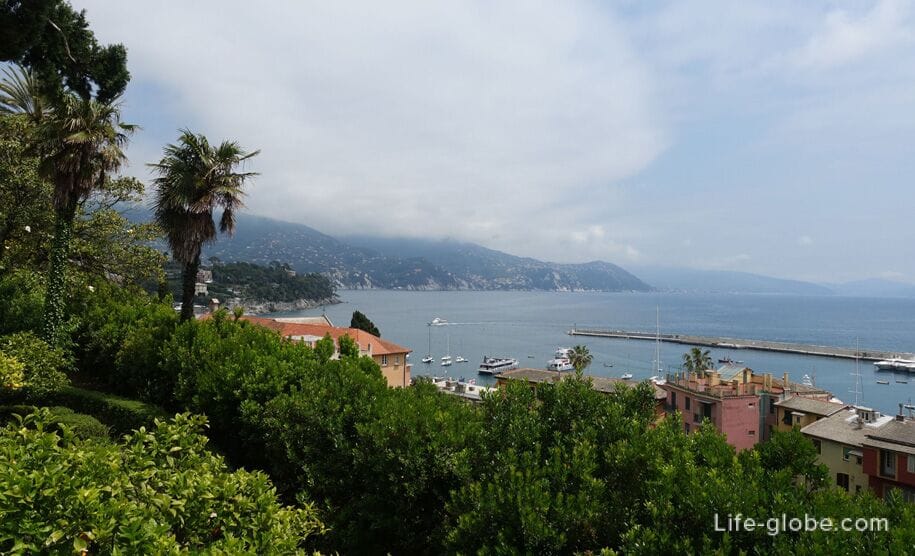 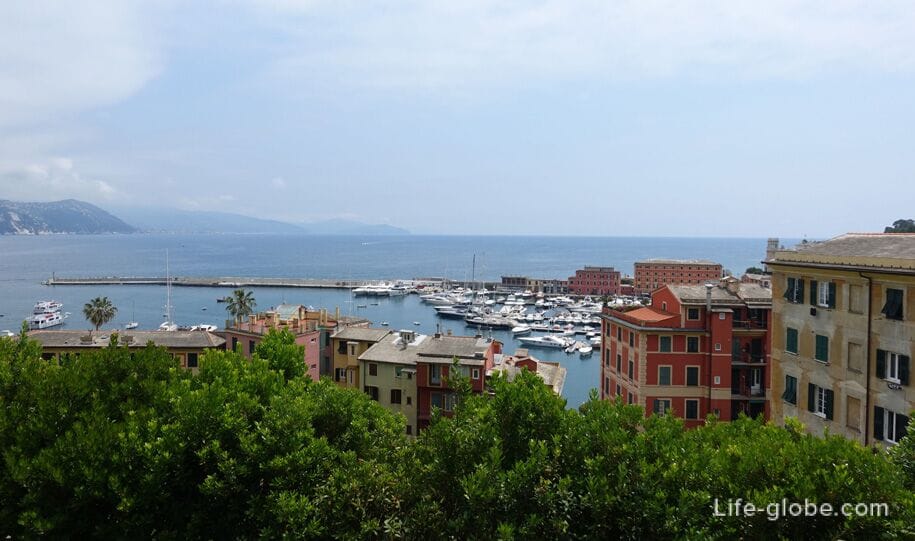 There is also a coffee shop in the garden, as well as another historic building of the Villa complex, but of a smaller size than the Villa itself. 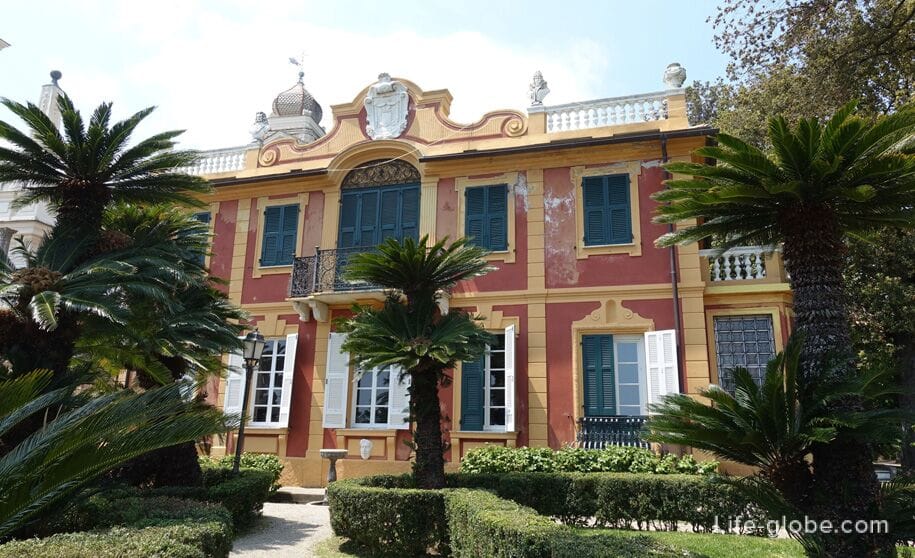 In the immediate vicinity of the complex of Villa Durazzo is located the parish Church of San Giacomo di Corte , or temple of Our Lady of the letter (Chiesa di S. Giacomo / Santuario di Nostra Signora della Lettera).

The Church was built in the 17th century, but some historical sources describe the building in the year 1000.

The Church is made in Baroque style. Her main facade is decorated by the marble statue of Saint James located in a niche over the central entrance. 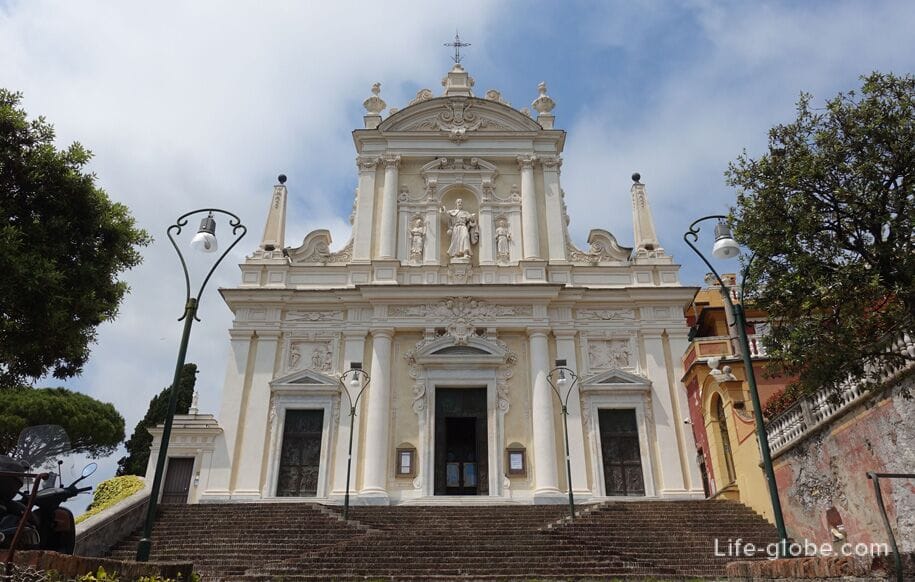 The Shrine is divided into three naves by two rows of high columns, connected by arched openings.

The walls of the Church are remarkable: color frescoes, Golden color and large chandeliers, as well as the statue of Madonna della Letter, created in 1766 by an unknown sculptor and several cycles of frescoes by artist Nicolo Barabino. 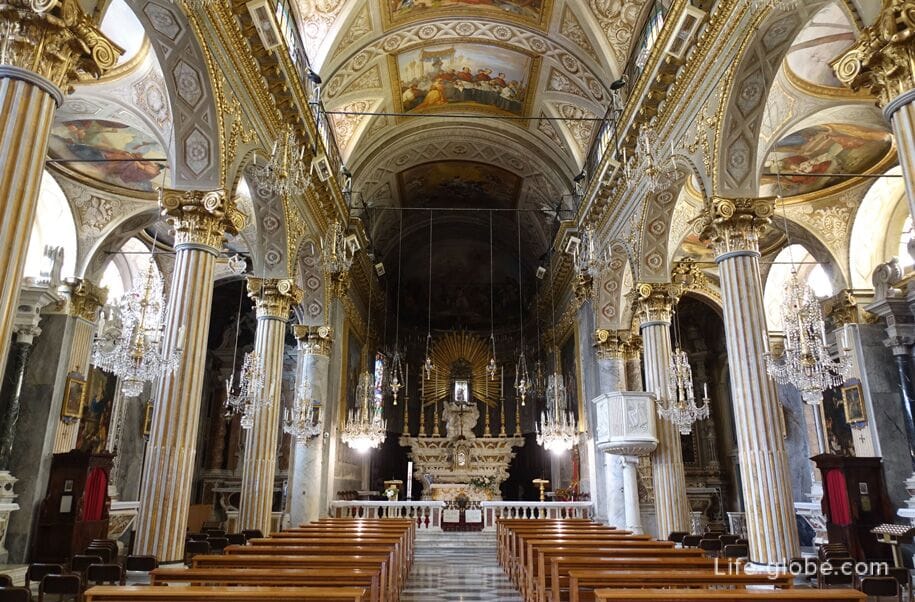