Balga Castle (German name Burg Balga) is one of the most famous monuments of medieval knightly architecture in the style of brick Gothic in the Kaliningrad region.

Since fierce battles were fought in the Balga area at the end of the Second World War, at present only the ruins of Forburg and the Nikolskaya castle church remain from the castle. For the same reason, the territory of the castle attracts a lot of "black diggers" from all over the country.

Until the end of 2014, the ruins of the castle were dismantled by local residents for bricks, which caused irreparable damage. Vandalism was stopped only by the fact that in 2007 the ruins of the castle received the status of an object of cultural heritage of regional significance, and in December 2014 repair and restoration /emergency work began at the facility, the completion of work is scheduled for December 28, 2015.

The ruins of Balga Castle are located in Kaliningrad region, the settlement of Veseloe. You can get to Balga either by sea or by car. We went by car. It is necessary to keep the way along the A194 Kaliningrad-Mamonovo highway. After about 46 kilometers from Kaliningrad, there will be a sign "Balga Castle" on the right side of the highway. Turn right and continue to the castle for about 8 kilometers straight, without turning anywhere. The road is eight kilometers long with surprises, then paved, then old German paving stones, and in places generally "off-road" with holes and potholes.

Along the Kaliningrad-Mamonovo highway there are several other attractions of the Kaliningrad region, these are the ruins of Brandenburg Castle and The Church of St. Nicholas in the village of Ushakovo, as well as the monument of wildlife Petiolate oak in the city of Ladushkin.

The ruins of the castle are scattered through the undergrowth. There is a place nearby where you can park your car.

We go to the ruins of Balga 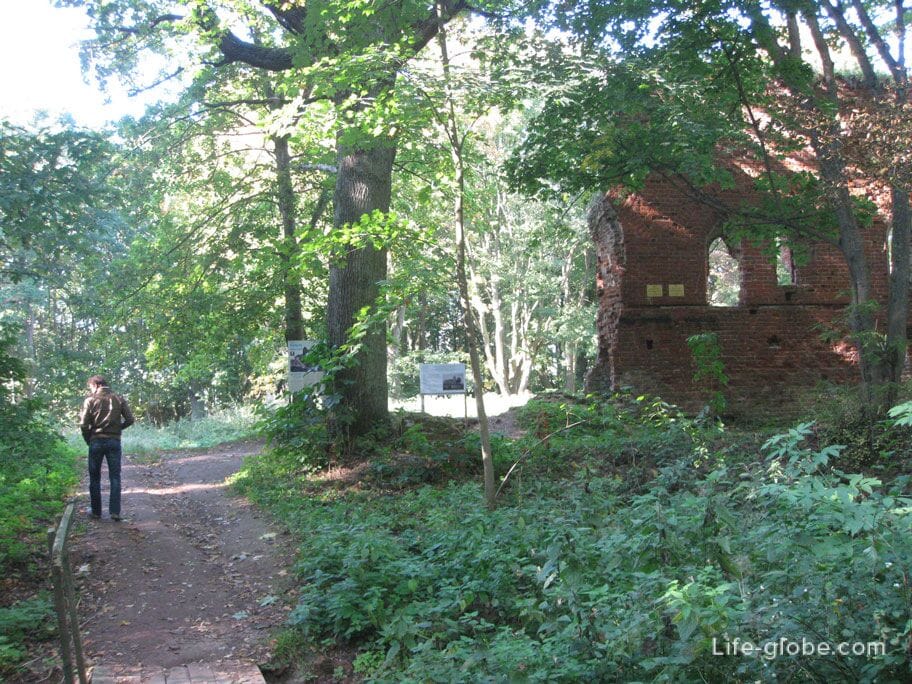 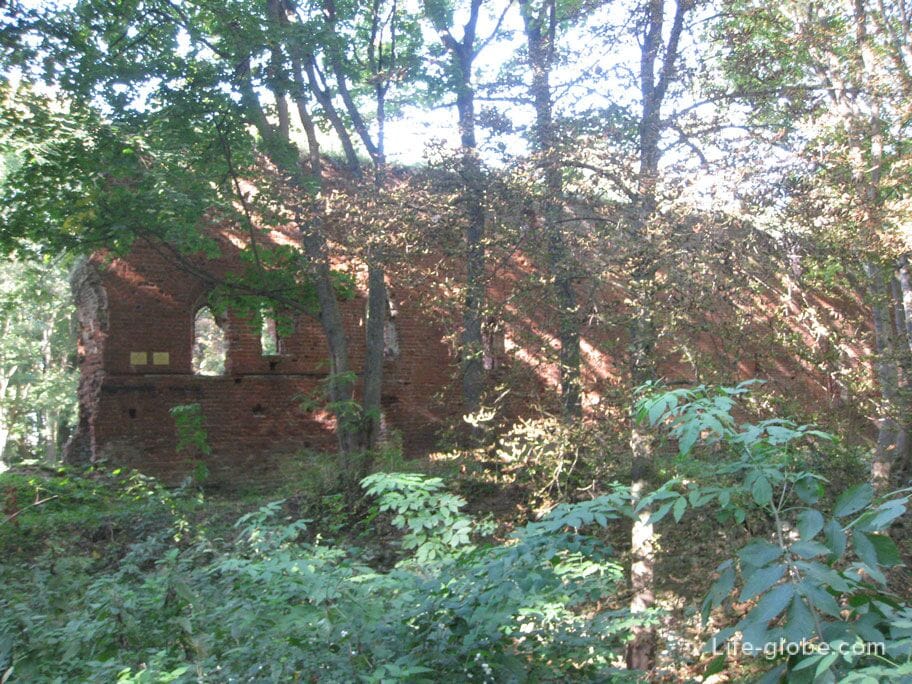 Near the ruins of Forburg there is a plaque with the history of the castle, about it a little below, and a photo of how the castle looked before. Admittedly, the fortress was very beautiful and had quite impressive dimensions. 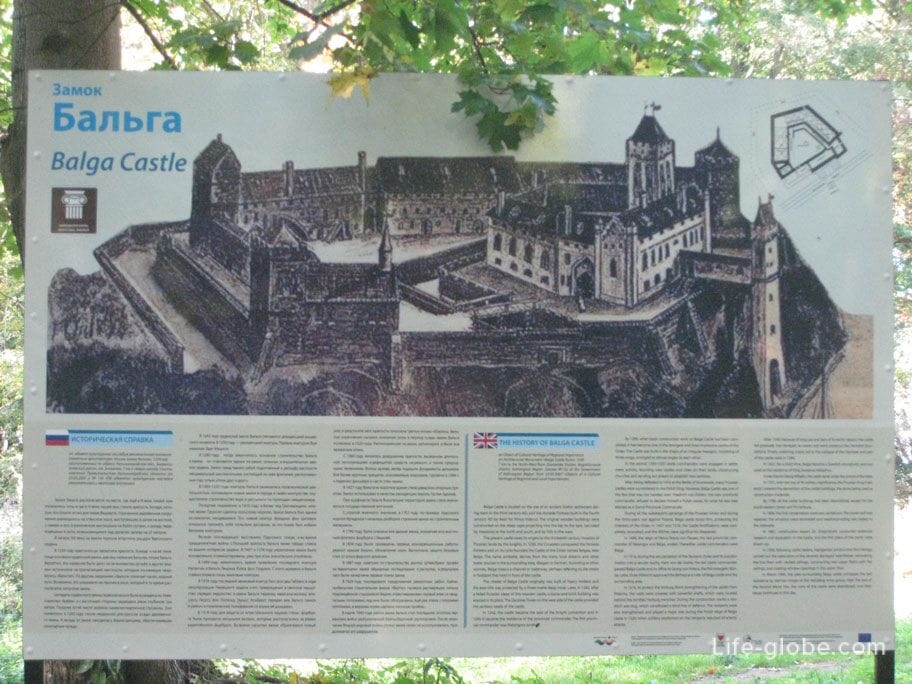 We go to inspect the remains of the walls of Forburg. Forburg is a fortification or fortified structure in front of the main building of the castle, fortress. 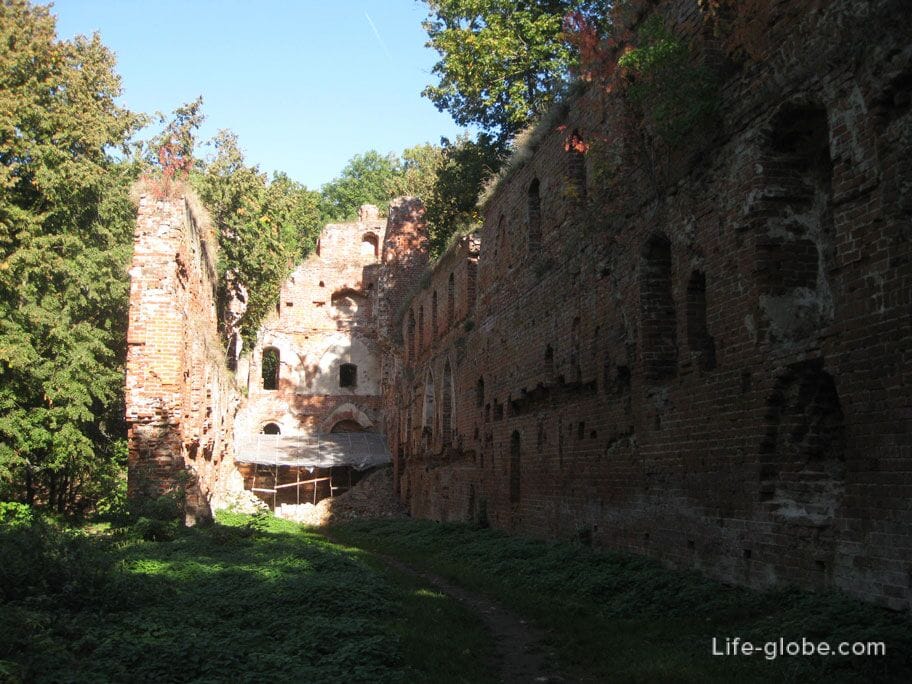 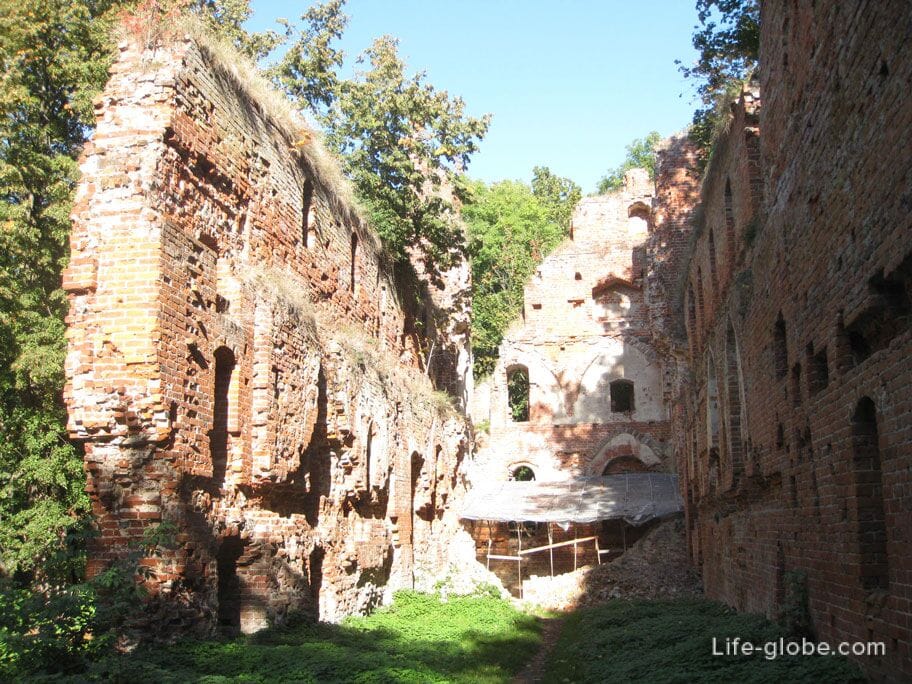 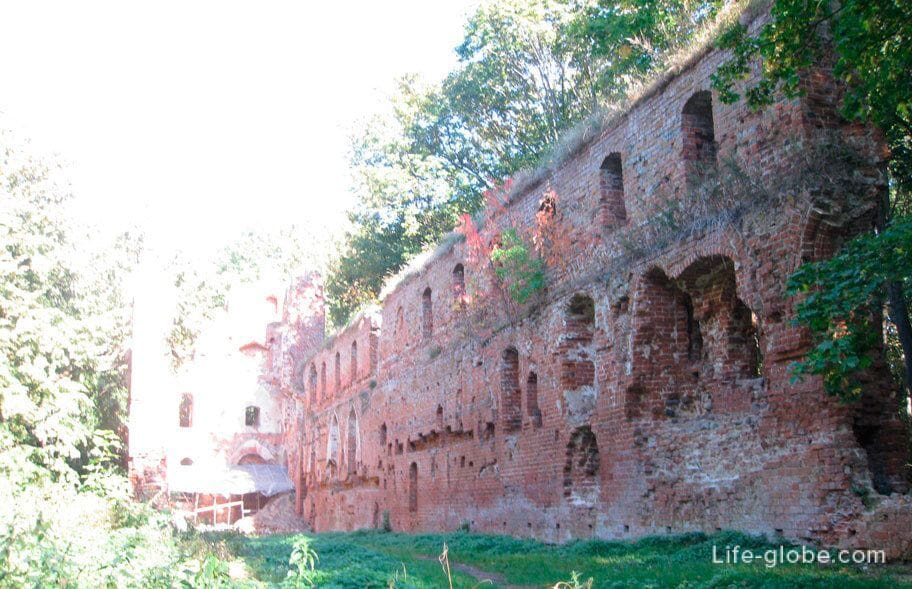 If you walk a little deeper into the undergrowth from the castle walls, you can see the Kaliningrad Bay, the view is very beautiful. 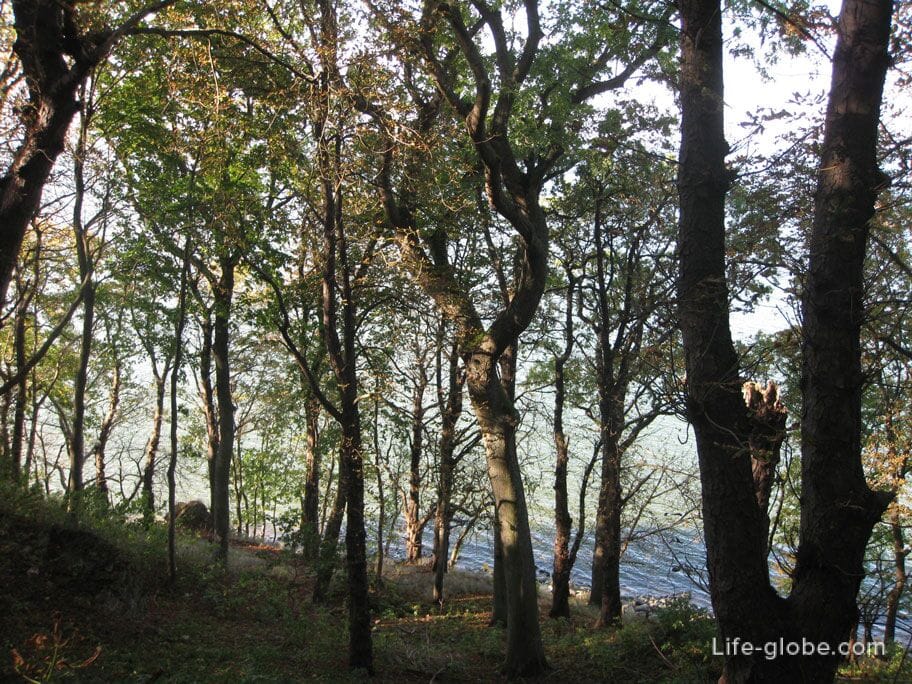 The descent to the bay is equipped with an old stone staircase, which we think has remained since the days of German rule by local lands. We did not go down to the bay, because at the beginning of October the water is already quite cool. 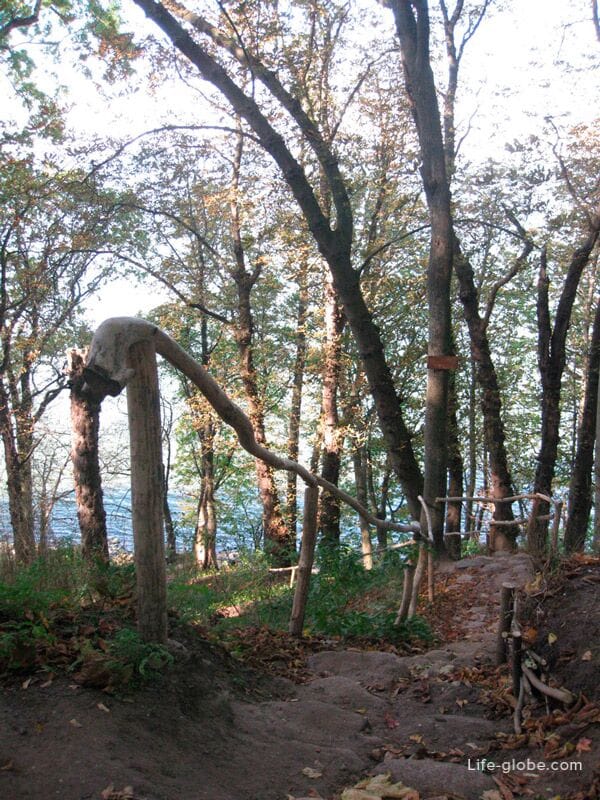 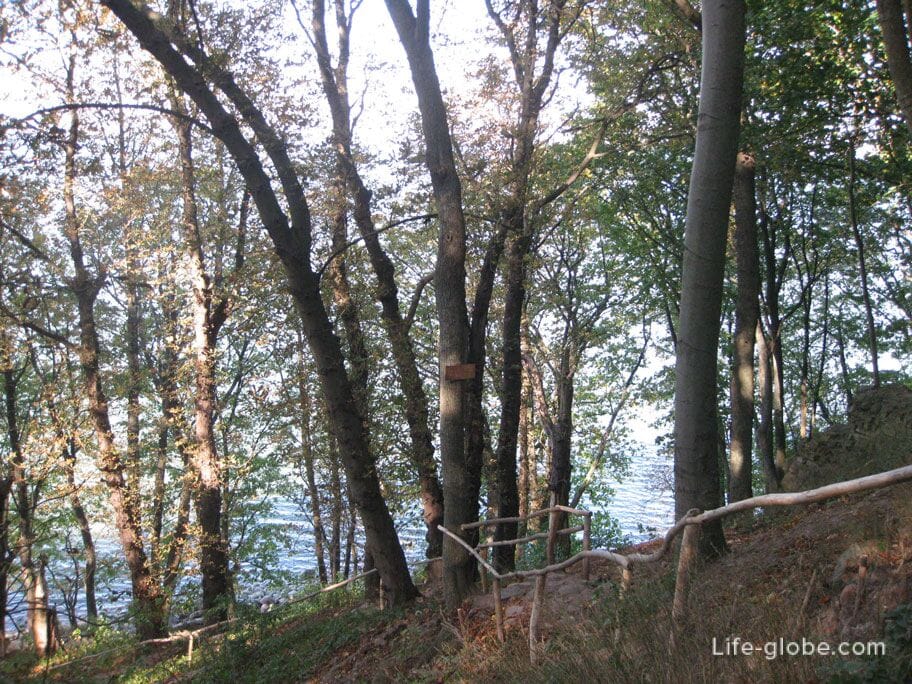 We go further, we came to overgrown boulders. These remnants previously served as fortifications of the fortress walls of Balga. 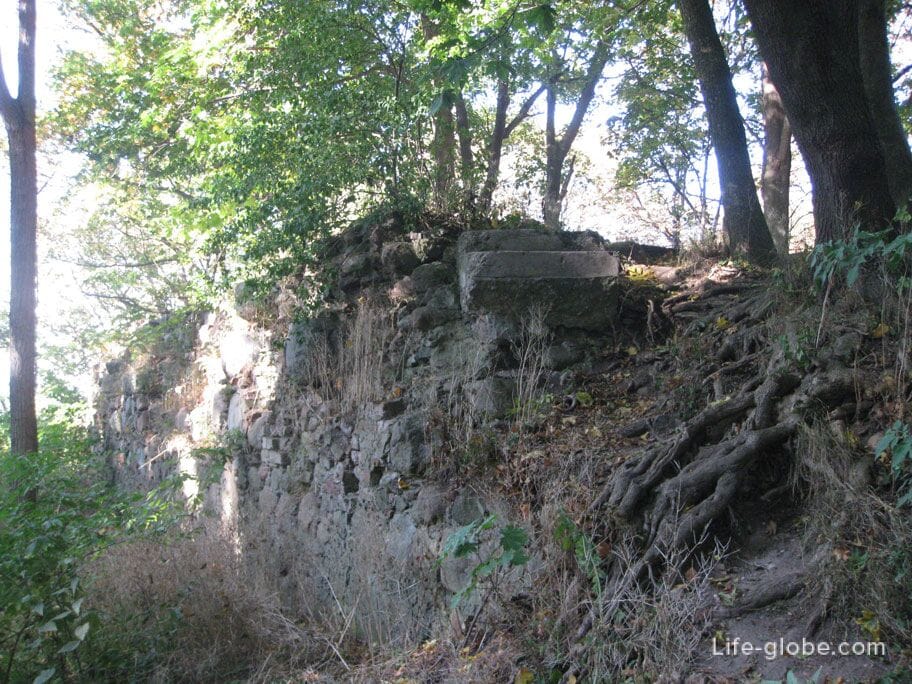 On the way we met two seals. Mom kitty with a kitten. They were very hungry. We had chicken sandwiches with us for a snack, we gave them some, even ate bread for a fight. 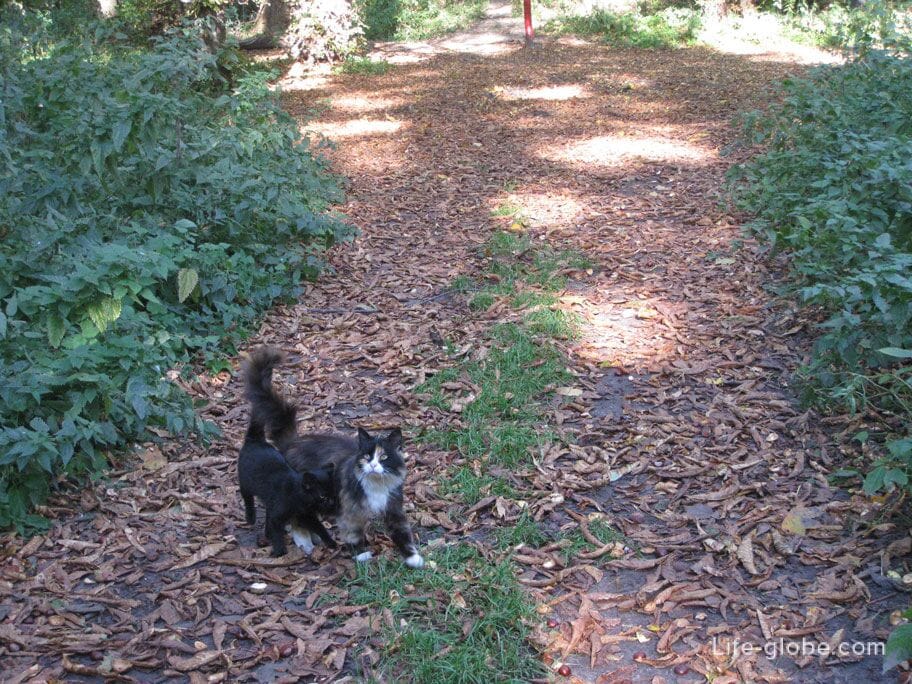 On the way to the church, we came across the remains of German graves. In general, grave crosses and tombstones around the Balga Castle church are quite common. There are pre-war German and graves from the Great Patriotic War. 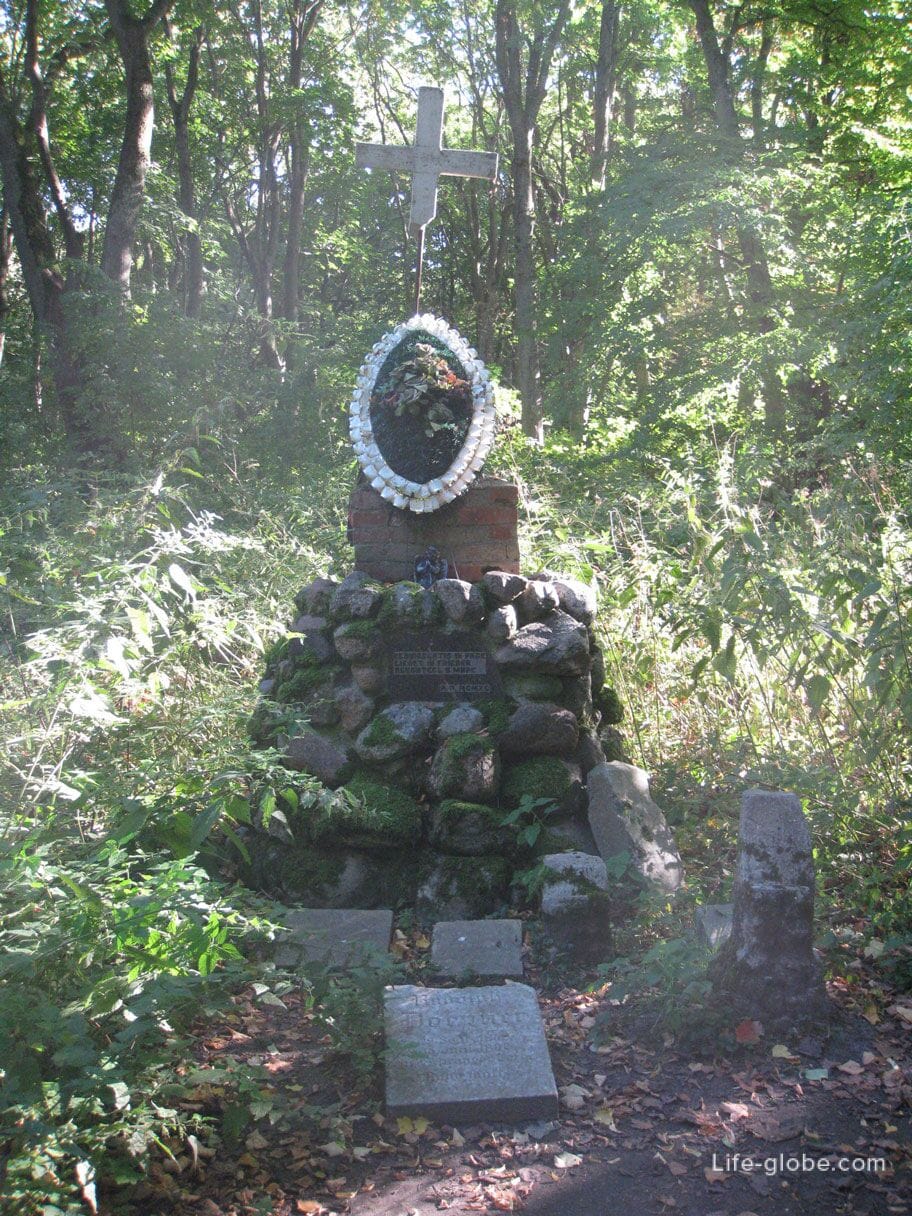 Here are the remains of the walls of the Church. Or as it is also called - the Church of St. Nicholas. 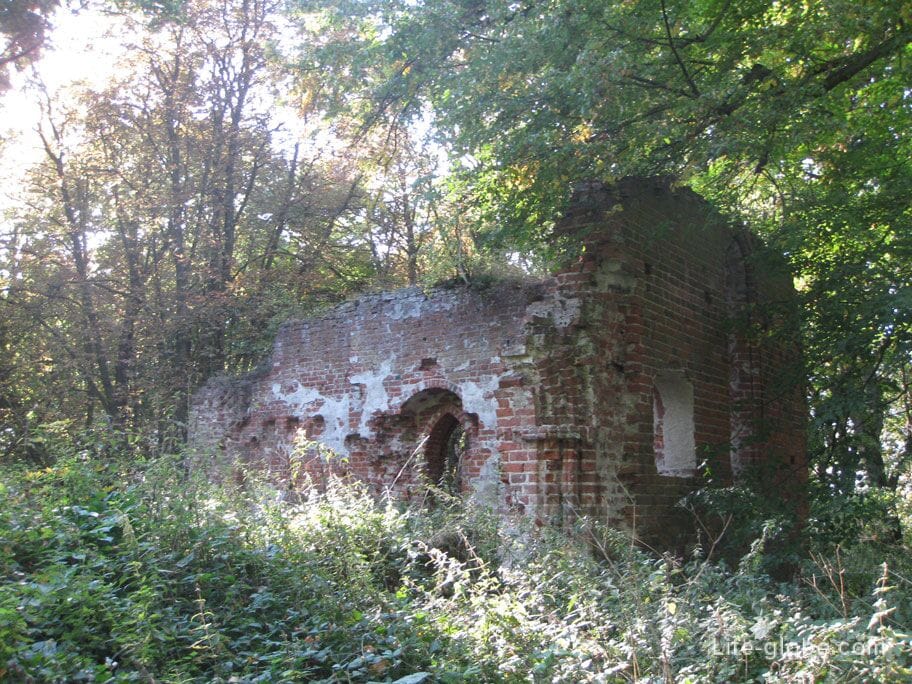 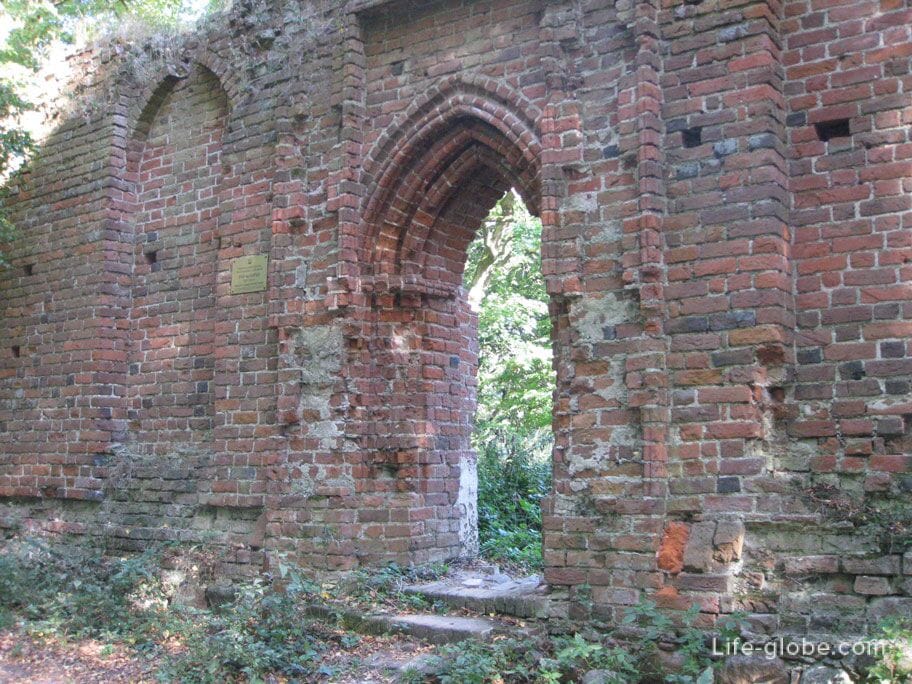 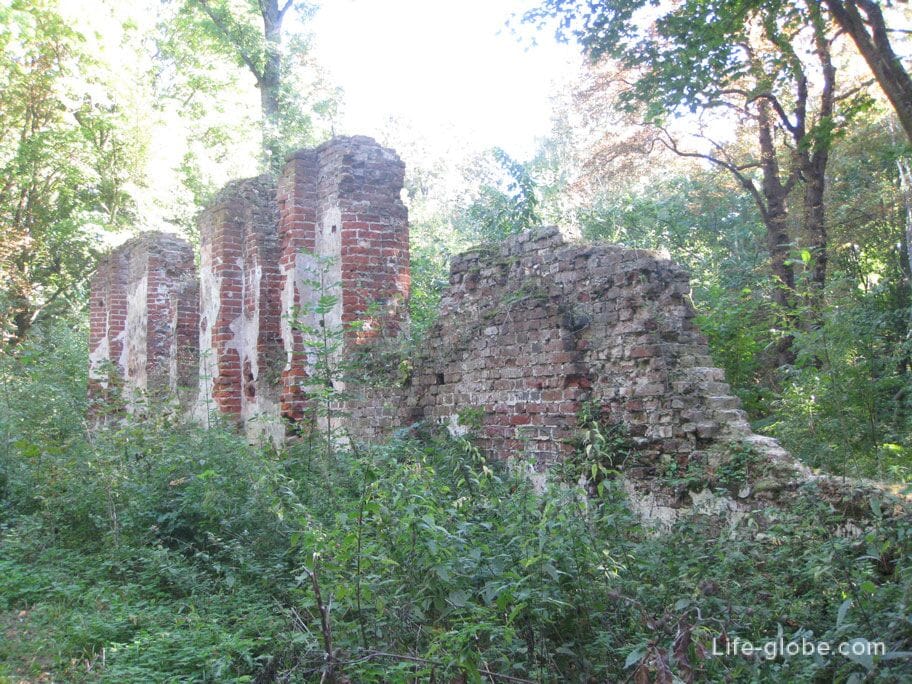 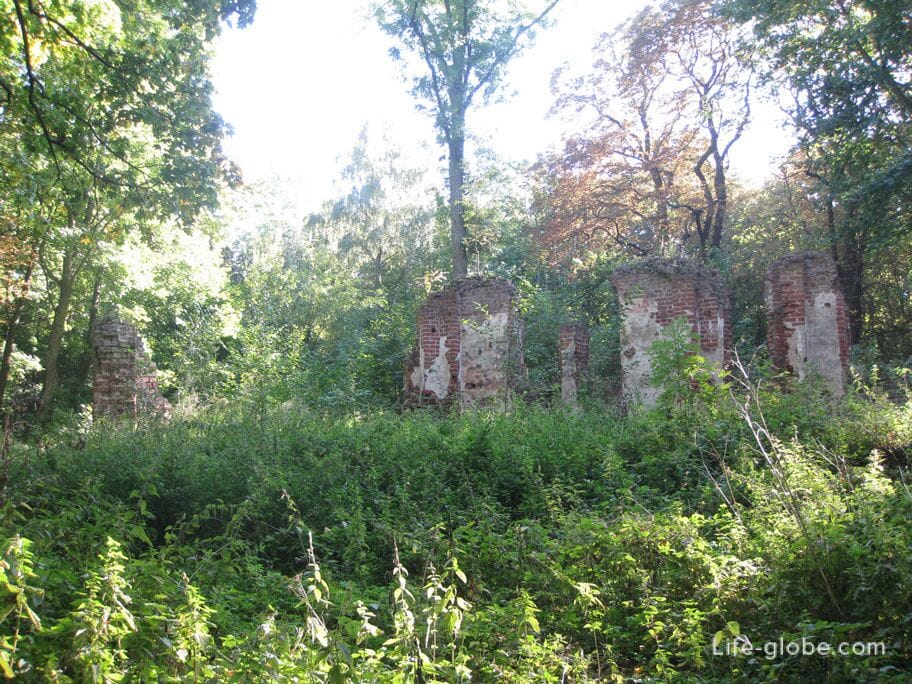 A gravestone is stuck against the right wall of the church. Traces on the stone, in our opinion, are traces left over from shells during the Second World War. 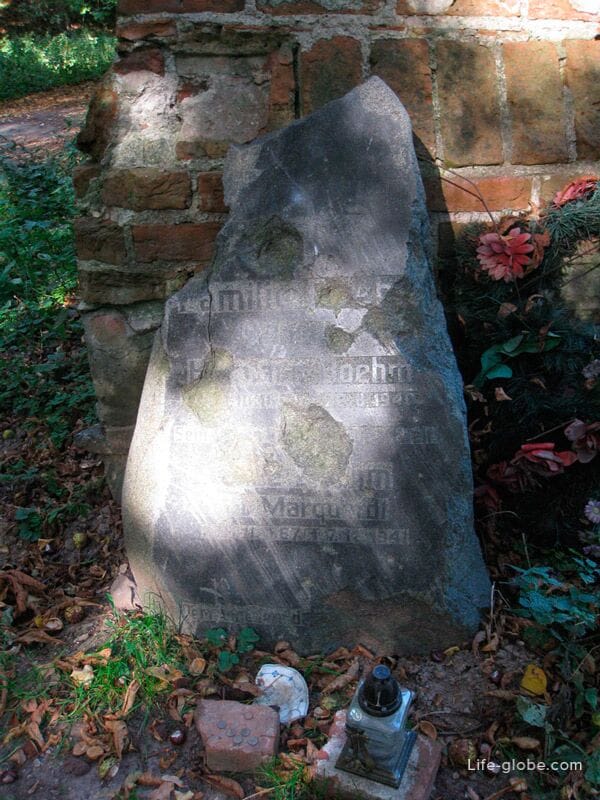 On the way back, we met a fox on the road. She wasn't afraid of us or the car at all. She sat quietly and stretched on the side of the road, quite willingly posing in front of the camera. When we stopped, she came almost right up to the car door. 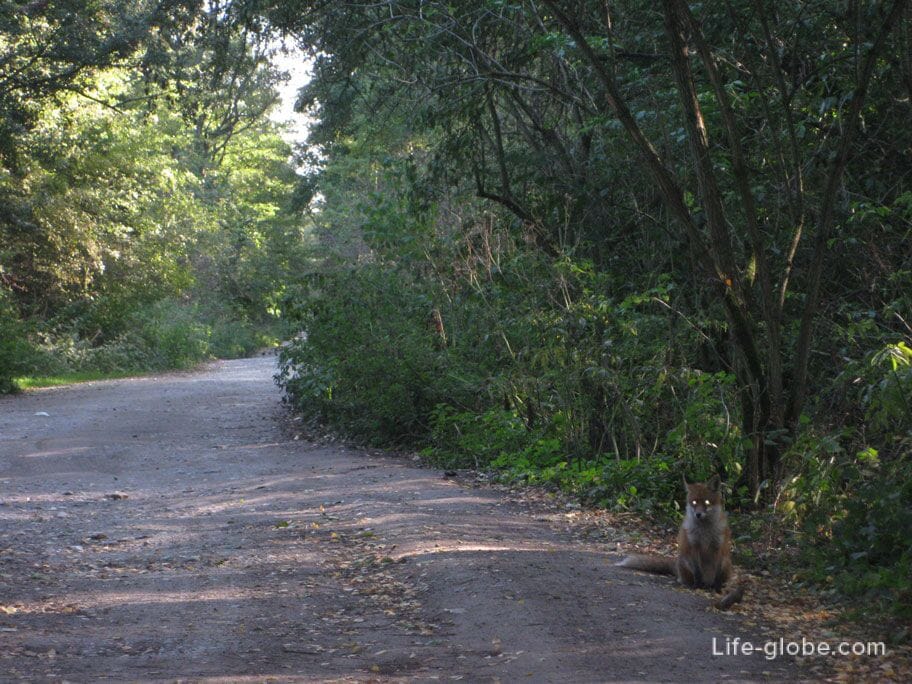 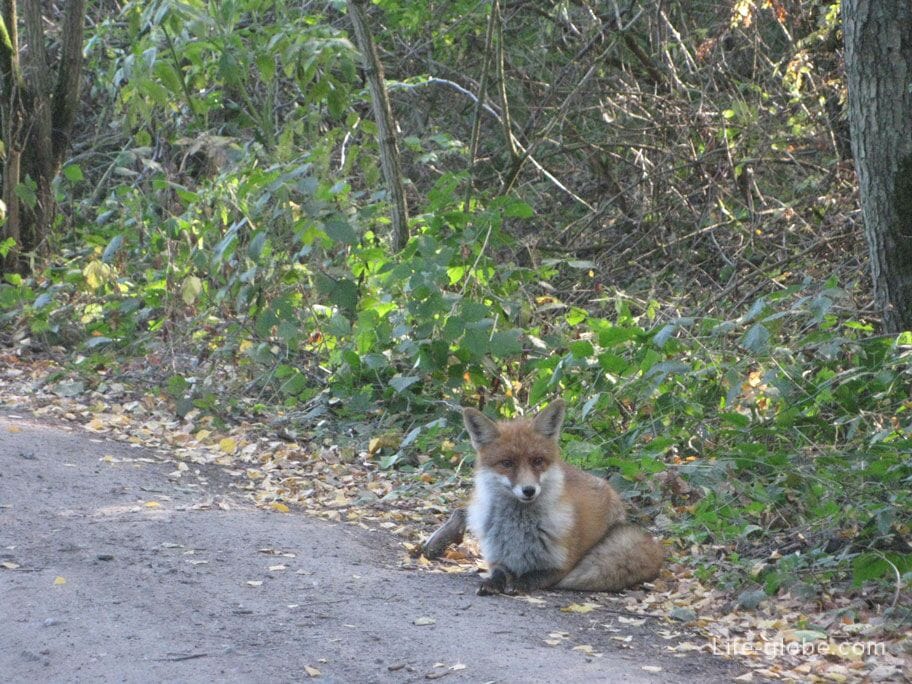 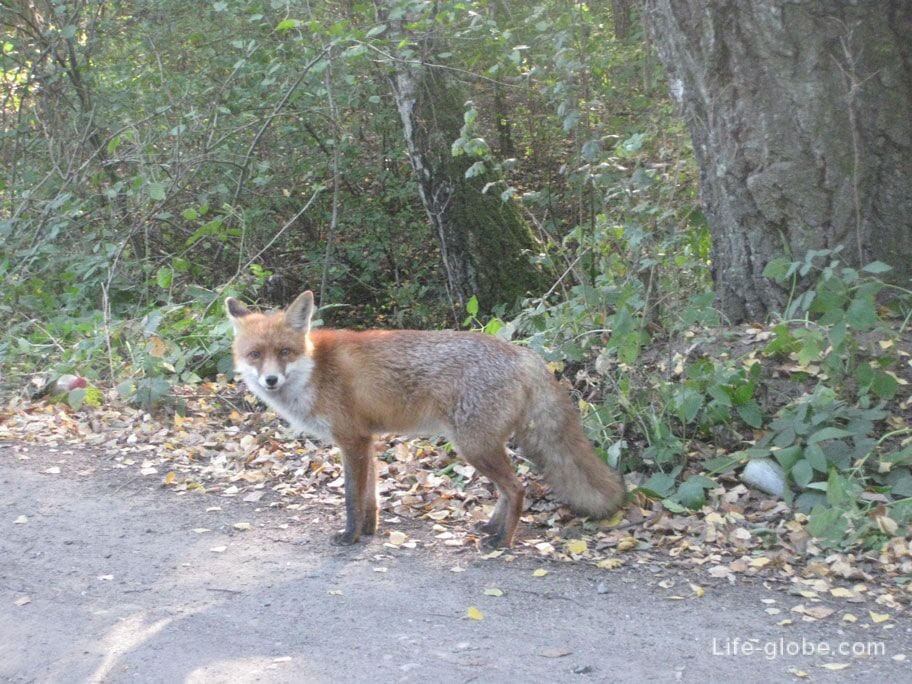 Now, as promised earlier, the history of Balga Castle:

Balga Castle is located on the site where the Goths settled in the third century AD, and where the fortress of Honede stood in the IV century AD, which was built by the Esti for Prince Videvut. The lost wooden structure was located on a steep promontory projecting into the bay in the east, bounded from the north and south by meadows dried out of swamps, turning into a hill to the west, rising 25 meters above the bay level.

At the beginning of the XIII century, the knights of the Teutonic Order invaded the land of the Prussians.

In 1239, the Crusaders captured the fortress of Honede and founded the Order's castle on its ashes, giving it the name Balgea, later Balga. Probably, this name was given because of the many streams and other water sources in the surrounding area, which were called "Balgei" in German. According to other sources, "Balga" means a canal, a waterway. Perhaps this indicated the tide in the spit, which at that time was located opposite the bay.

The citadel of the Order's castle was originally built of heavy logs and protected on the east side by a moat three meters deep. Later, a stone-brick structure was erected in its place, it appeared in 1242 after an unsuccessful siege of a wooden castle for the Prussians. To the west of the castle there was a dancker tower, which provided sanitary needs.

In 1290, when the main construction of the Balga in stone came to an end, the castle acquired the status of one of the strongest and most impressive castles of the order. At that time, the castle was an irregular hexagon fitted to the terrain, consisting of three wings located at an obtuse angle to each other. An outbuilding (from the German Flügel, the main meaning is a wing) is an auxiliary extension to a residential or non-residential house, as well as a detached secondary building.

In the 1300-1320 years, the Balga komturs were engaged in settlement activities, founded new castles and cities in their komturstvo, carried out the construction of churches (in our opinion, churches, prayer buildings) and sent priests to parishes.

Having been defeated in 1410 in the Battle of Grunwald, many castles of Prussia surrendered to the Polish king. Balga Castle was one of the few unreleased. His new komtur Friedrich von Zollern refused to recognize himself as a Polish vassal, for which he was later elected Grand Komtur.

In all the subsequent uprisings of the Prussian Union and during the Thirty Years' War with Poland, the fortress of Balga also firmly defended the interests of the order.

In 1499, the reign of the last comtur of Natangia and Balga, Heinrich Reuss von Plauen, ended. From that time on, only castle komturs dominated in Balga.

In 1516, the last castle commander, Hans von der Gablens, during the secularization of the German Order and its transformation into a secular duchy, transferred the office, Balga Castle and the entire area for life use with all their income, to the first evangelical bishop Georg von Polenz. Secularization - in historical science, the removal of something from the ecclesiastical, spiritual knowledge and transfer to secular, civil leadership.

In the same year, to protect against firearms, the walls of the forburg were covered with powerful boulders (some of these boulders have survived to our times), which were located behind the moats of the fortified forburg. During the filling of the ramparts, a new moat was formed, as a result of which the fortress received a third line of defense. Later, in 1520, during the siege of Balga Castle by the Poles, it was this fortification that played the main role. The artillery located on the ramparts repulsed all enemy attacks.

In 1560, the destruction of the fortress began, caused by prolonged operation and a shortage of funds for repairs, as well as natural phenomena, the main of which was the proximity of the castle to salty sea waters. The waves of the bay and the wind washed away the foundations of Dantzker. As a result, larger and larger cracks were formed, reinforced by frosts. All this in 1584 led to the fall of dantzker and part of the castle walls.

In 1627, Balga briefly became a Swedish stronghold. The castle was used as a residence by King Gustav Adolf.

Under Elector Georg Wilhelm, the territory of the castle became known as the state patrimony. Patrimony is a land possession that fully belongs to the feudal lord hereditary (from father to son) with the right of sale, pledge, donation.

With the loss of military significance in 1701, by order of the Prussian King Frederick I, the dismantling of the castle buildings for building materials began.

By 1790, all the buildings of the castle were demolished, except only the south-eastern wing of the Forburg with a tower.

In 1836, the first conservation works were carried out, the roof of the tower was repaired, windows were updated and the side walls were protected from atmospheric influence.

In 1887, construction advisor Dr. Steinbrecht conducted extensive research and excavations on the castle grounds, as a result of which the first plans of the castle were drawn.

In 1927, in order to attract tourists, a museum of local lore was organized on the territory of the fortress, the walls of Forburg were painted with the names of the grand masters of the Teutonic Order.

In 1929, the continuation of repair work followed. The Heiligenbal construction company "Vertig" carried out the restoration of the badly damaged watchtower. As a result, the first floor with vaulted ceilings was restored in the tower, and window openings were made in the upper floor.

In March 1945, during the Second World War, the Balga Castle area became the last stronghold of German troops.

After the end of the war, the ruins of the castle were not used in any way, its destruction continues.

To this day, only the ruins of Forburg and the St. Nicholas castle church, dismantled by local residents for bricks, have survived. 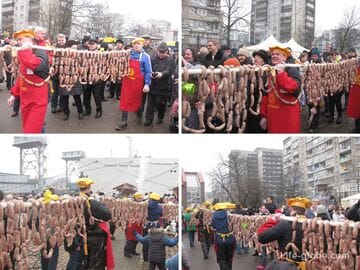 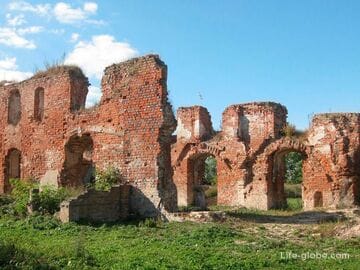 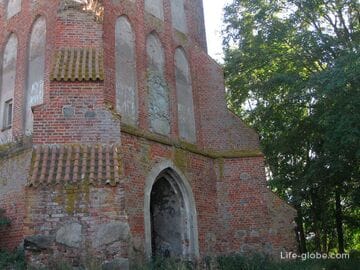 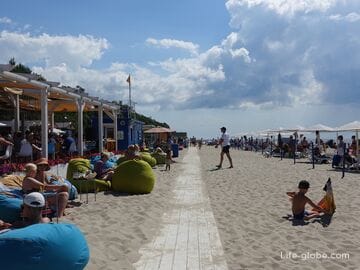