Monte Monaco - the majestic mountain, located on the coast of the Tyrrhenian Sea, to the North-East from the center of one of the most popular and fashionable resorts of Sicily, a small coastal town of San Vito Lo Capo.

The rock of Monaco is the symbol of San Vito, it can be clearly seen from any point of the resort. At the top of the mountain you can see the cross, which, like a magnet, attracts the eye again and again, resulting in an inexhaustible desire to curb the formidable giant, climbing to its top. 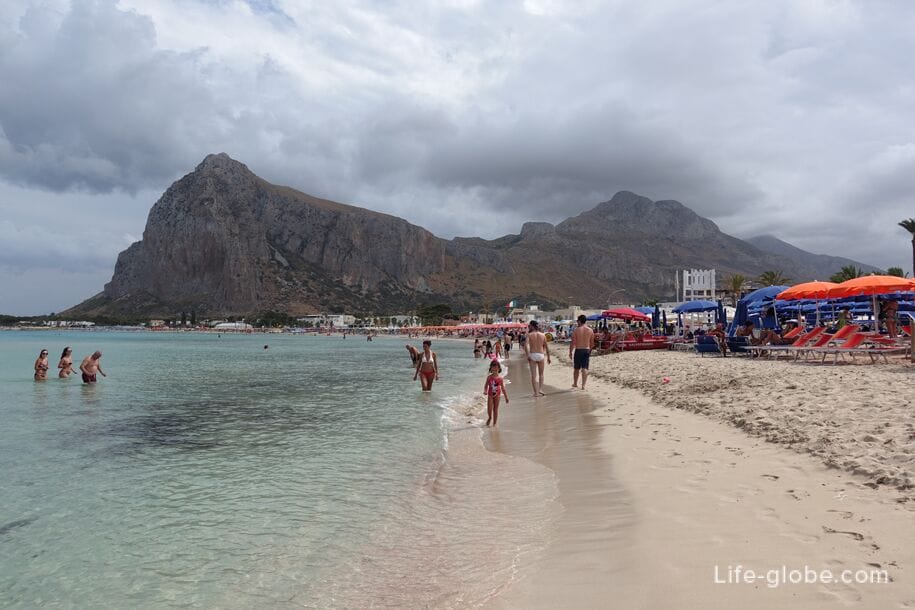 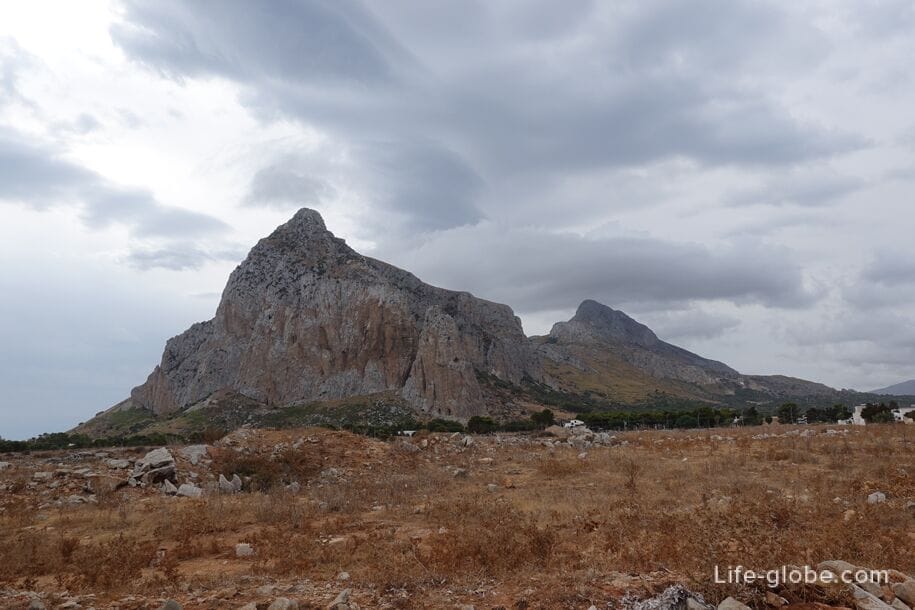 The height of the top of the cliff, just where is the cross, is 530 metres above sea level. Climb to the top of the mountain Monaco, by taking a short hike, not difficult, route difficulty is easy, it effortlessly can overcome even the children. The trail leading to Monte Monaco is historic, once used by farmers and reindeer herders.

Distance from the centre of San Vito lo Capo to the top of the mountain is about 5.5 kilometers, and the length of the track in hilly terrain 3 kilometers. 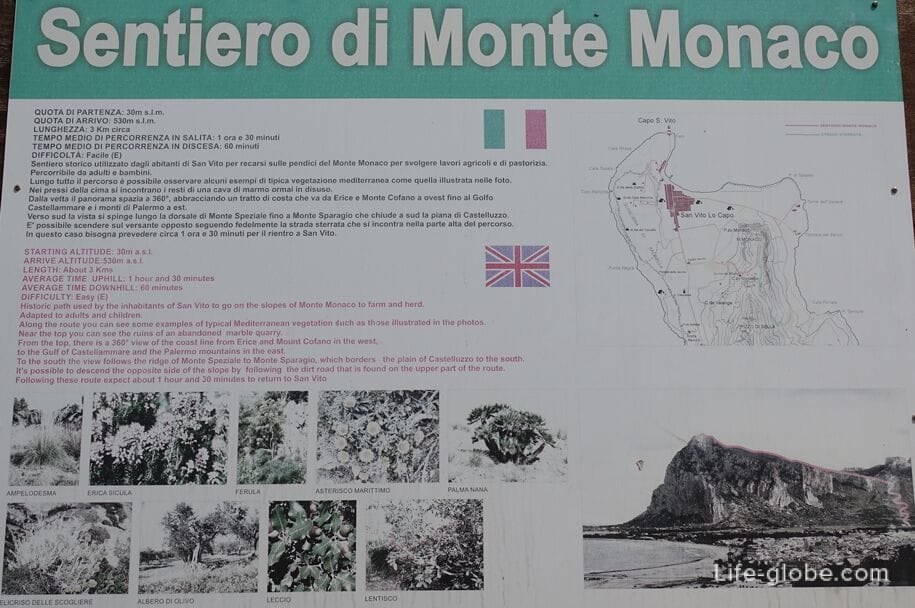 Average ascent time: from 1 hour to 1 hour 30 minutes (depending on the speed of movement), and descent, about 60 minutes. However, deciding to climb the mountain, do not rush, the magnificent views opening on the way, will accompany you throughout almost the entire climb. That is why, admiring the panoramas, taking photos and enjoying the very rise of time on the way to the top may need much more. We ascent took about 2 hours, with stops, literally every 100-200 meters. 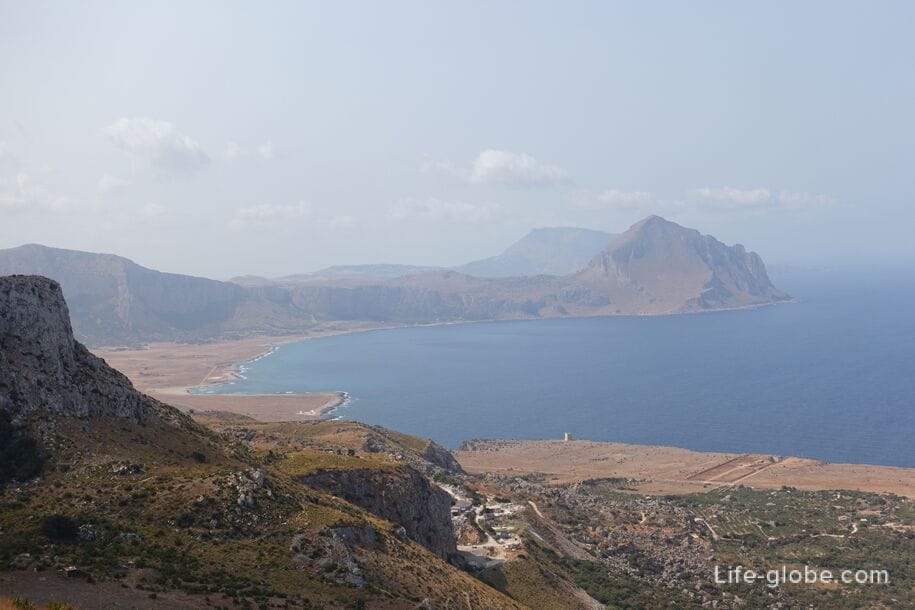 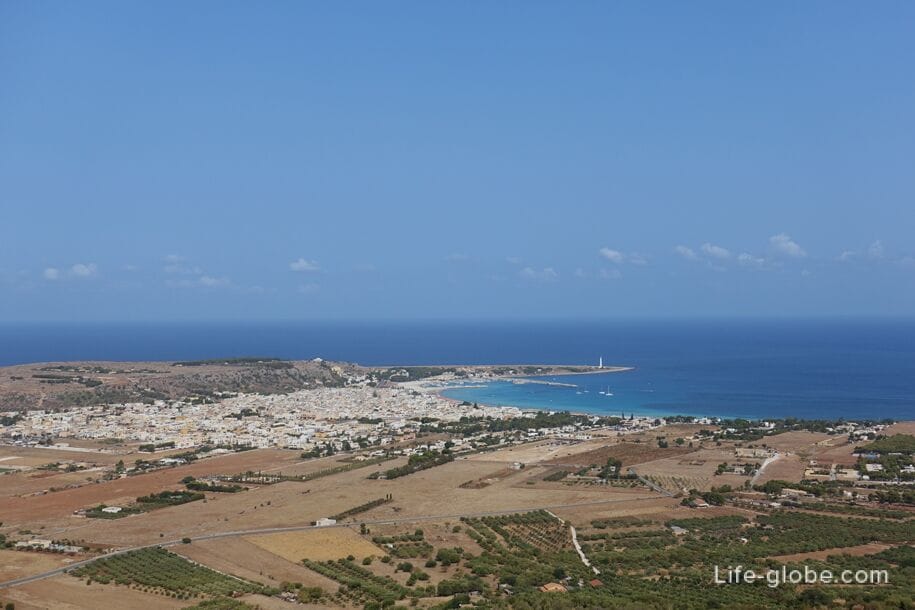 Visiting Mount Monte Monaco is better in the morning, while the sun is on the side of the mountain and the rays illuminate the city and the coast, it is at this time that the most beautiful panoramic views open from the top of the cliff, and the color of the already azure sea water becomes even more beautiful.

The first half of the way passes along the mountain slope, the mountain path is very narrow, there are stones and thorny vegetation, so we recommend to wear clothes that cover your feet and comfortable shoes. Also take with you clean drinking water, ideally a backpack (hands free), and on a hot summer day to take care of the skin and apply to the open areas of the body sunscreen, you can bring a headdress, well, if you want, something to chew. 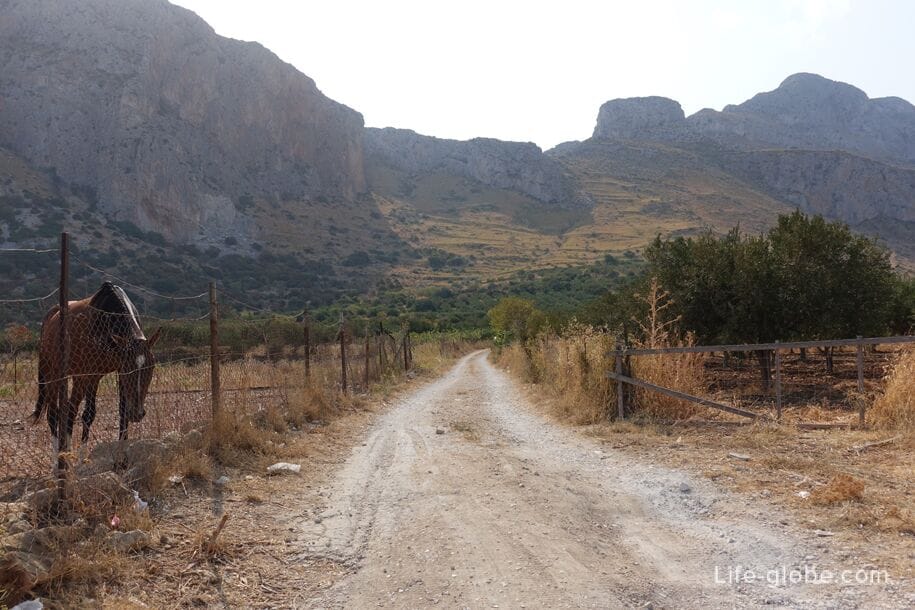 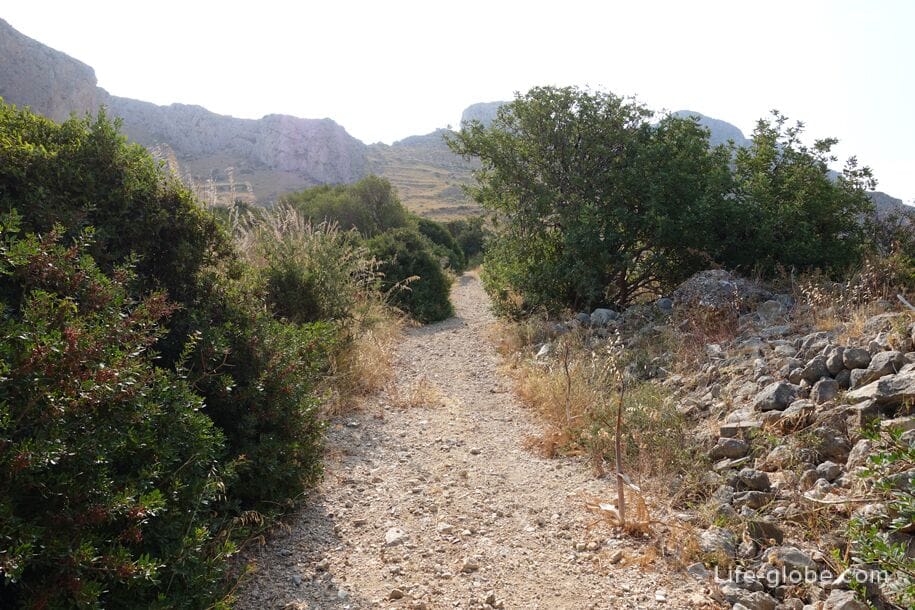 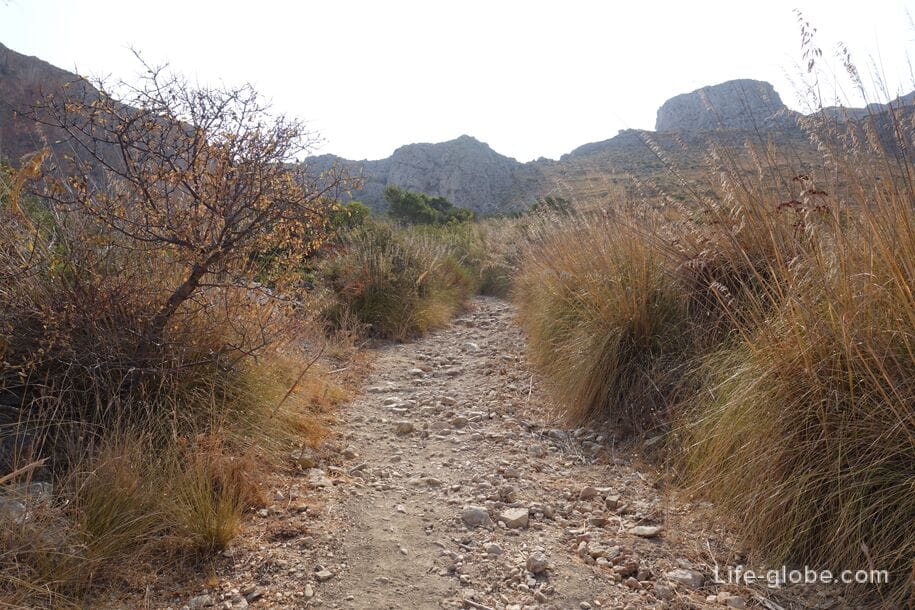 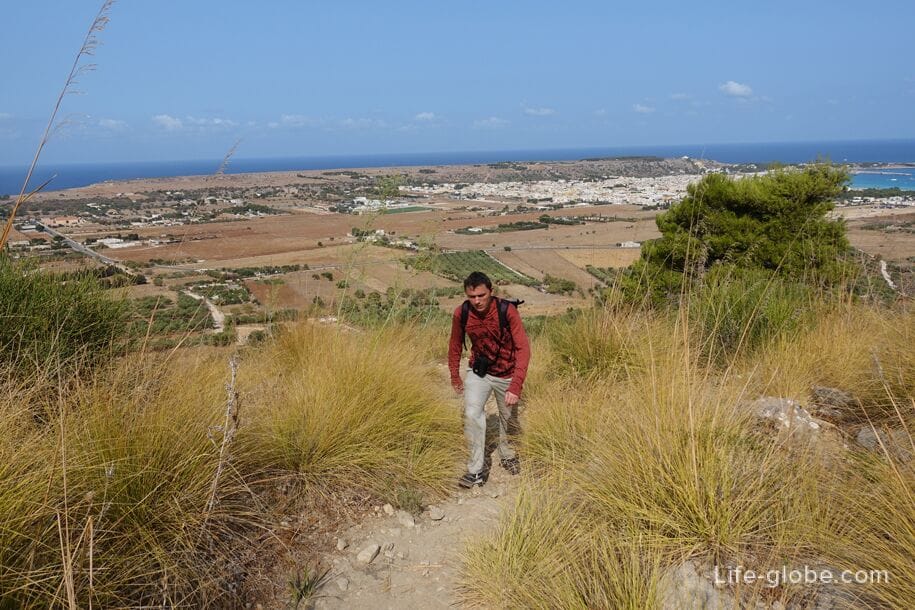 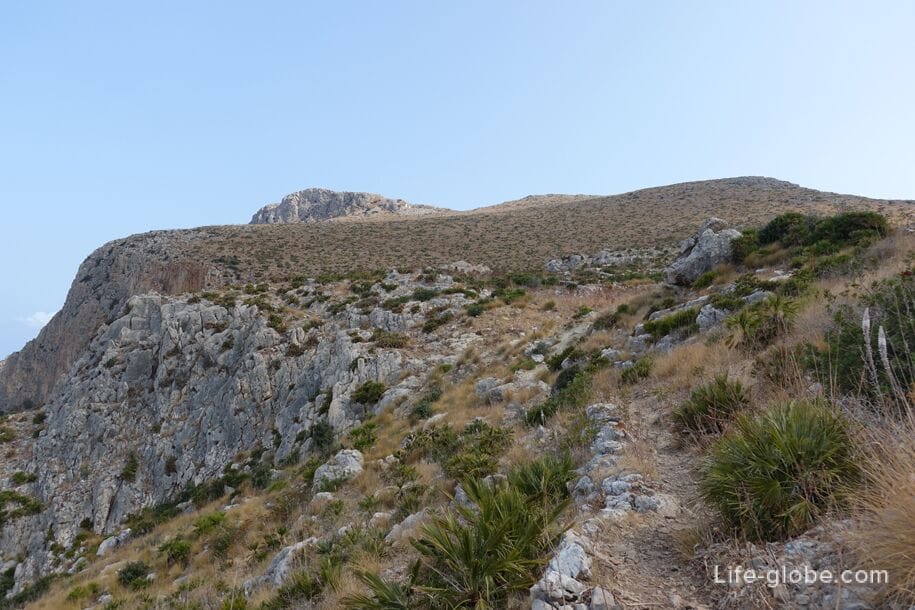 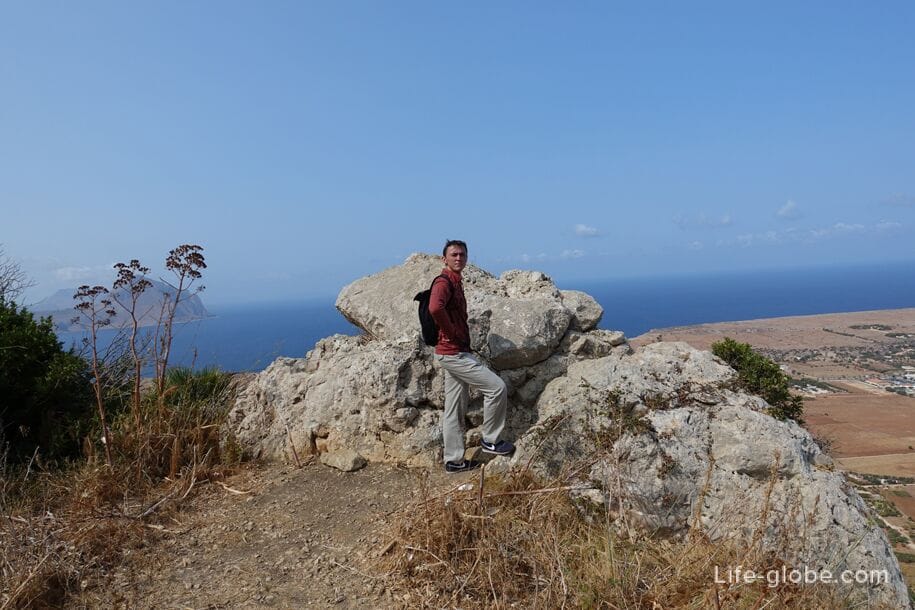 The second half of the path runs along the flatter part of the mountain and is more convenient. There are signs along the way - it’s impossible to get lost. 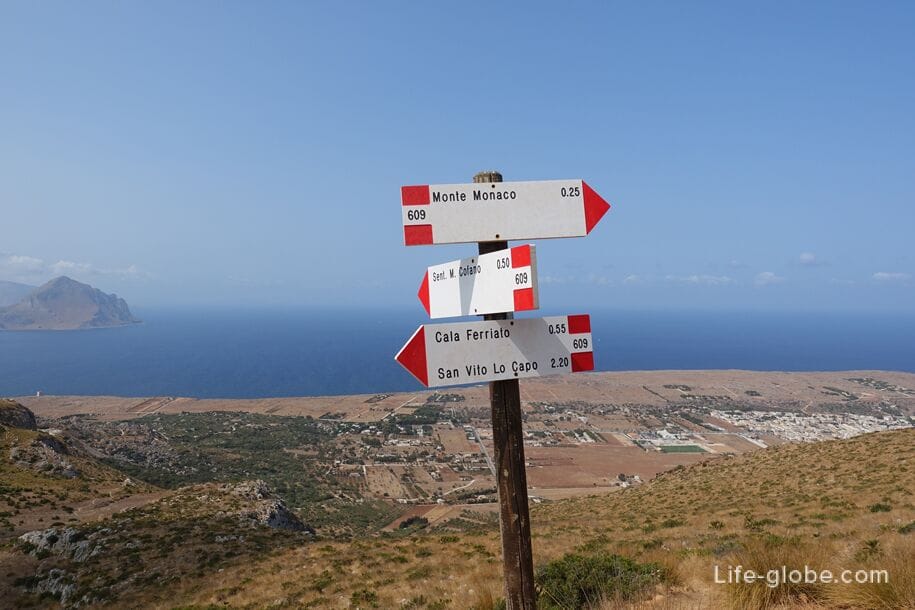 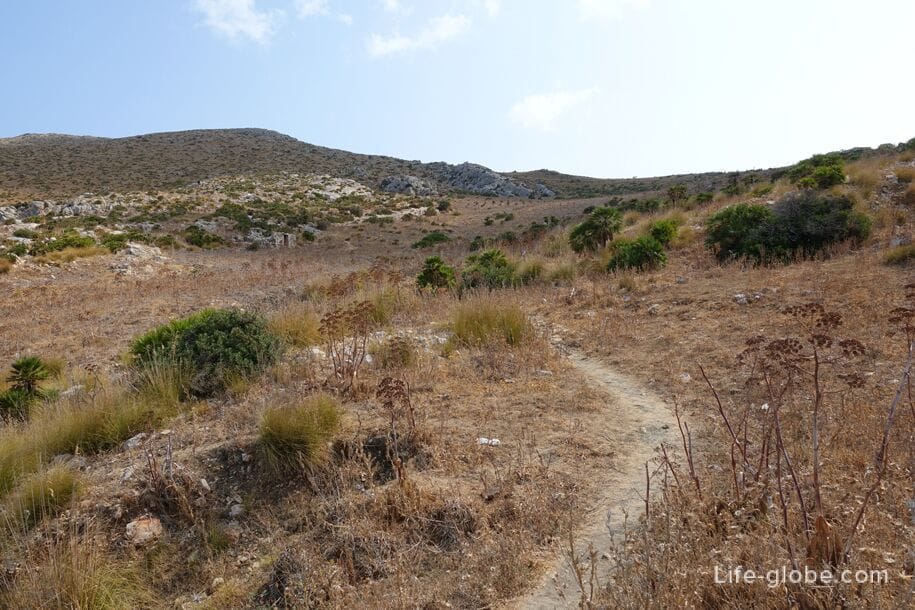 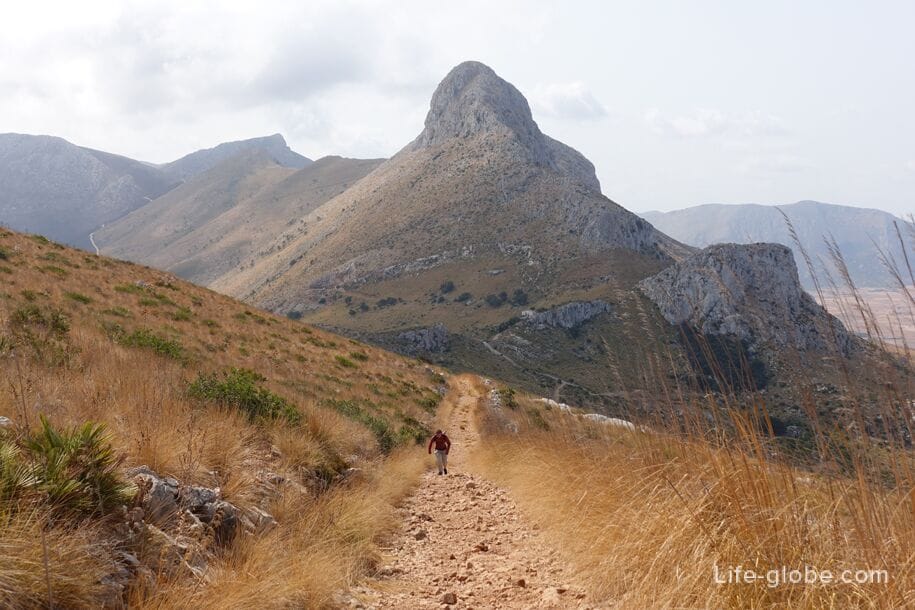 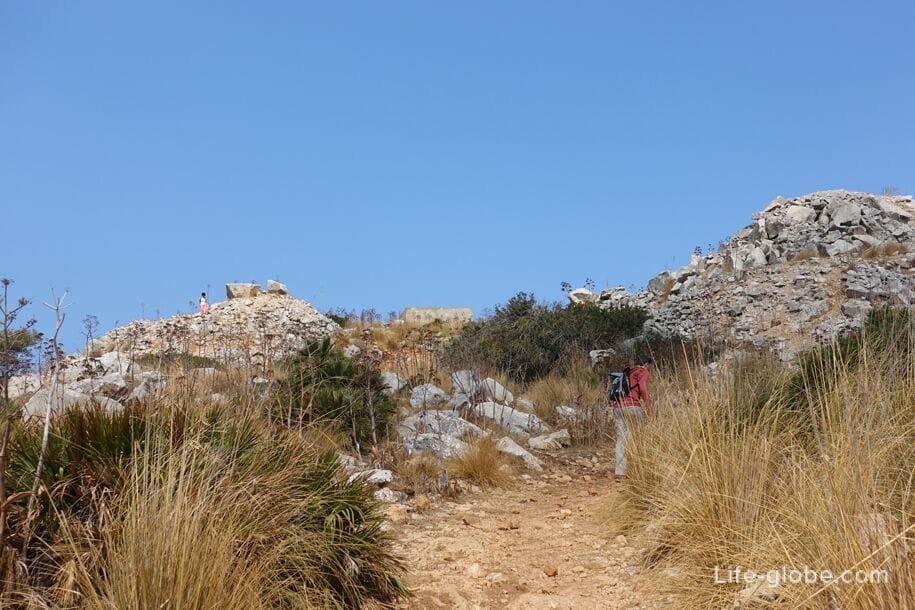 Here is an opportunity to see the mountainous terrain of the nature Park and meet the local inhabitants. 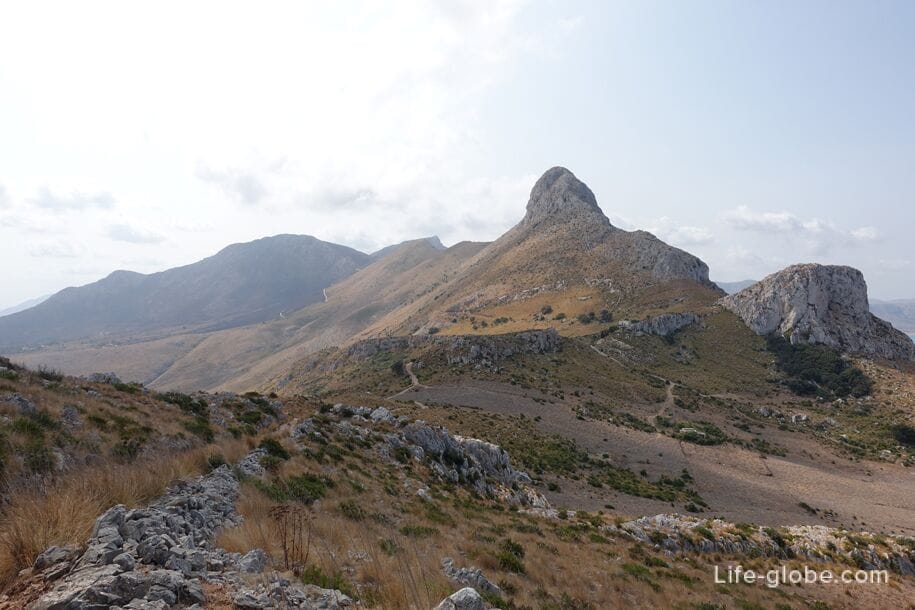 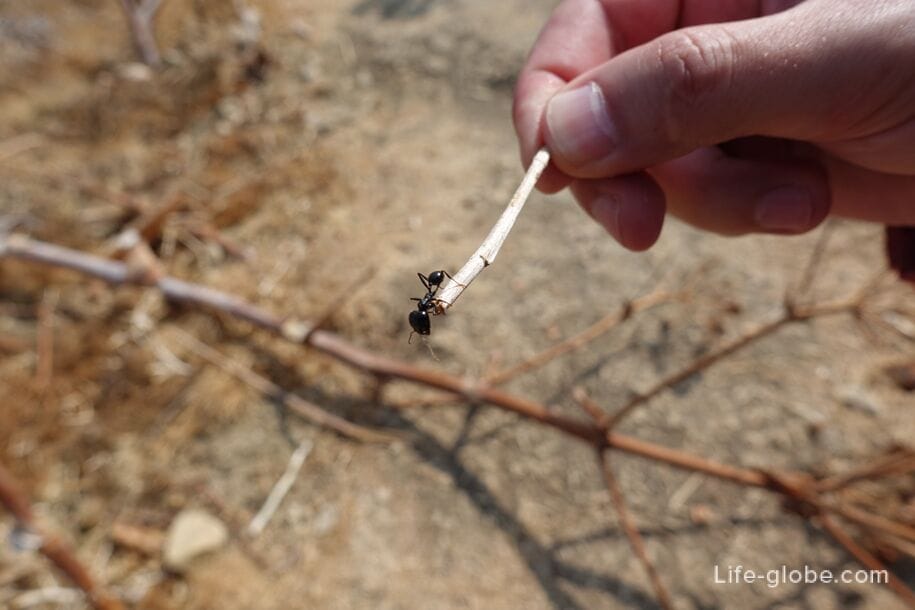 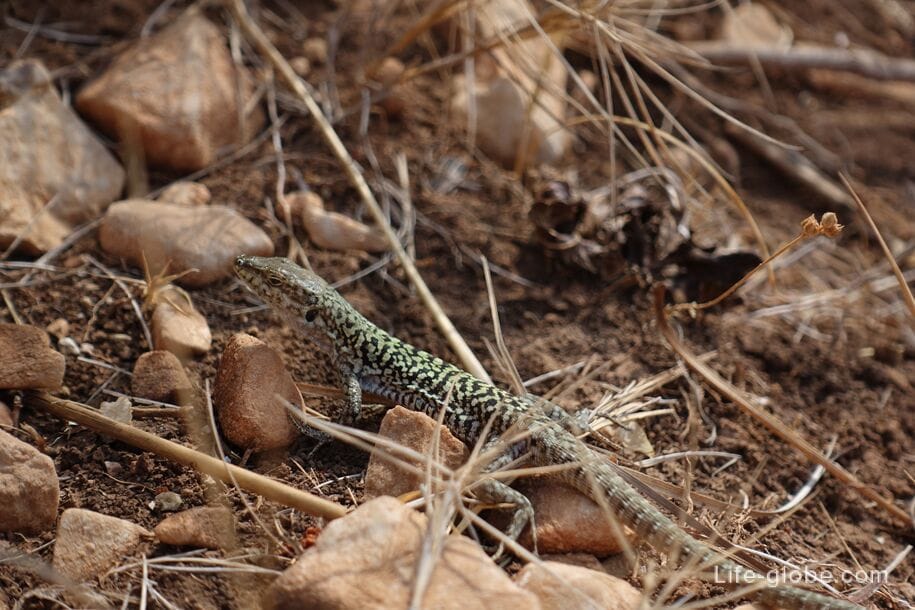 The views from the top of mount Monaco (Monte Monaco)

Having risen to the top, the view opens up with a nearly full 360 degree view, including amazingly beautiful views of San Vito Lo Capo, the Tyrrhenian Sea and the surrounding area.

To begin with, you can admire the Northern part of the coast, see the historical monuments and the surrounding area. 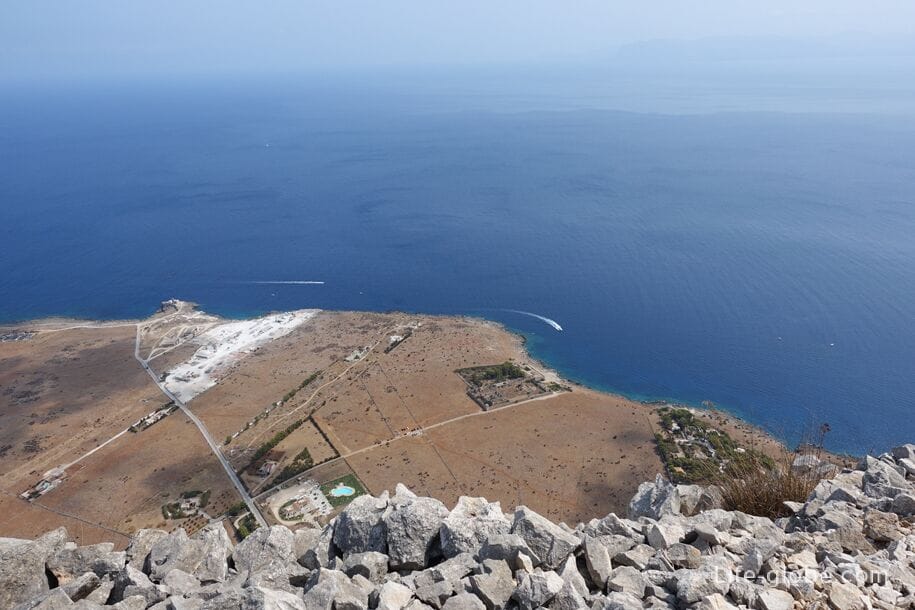 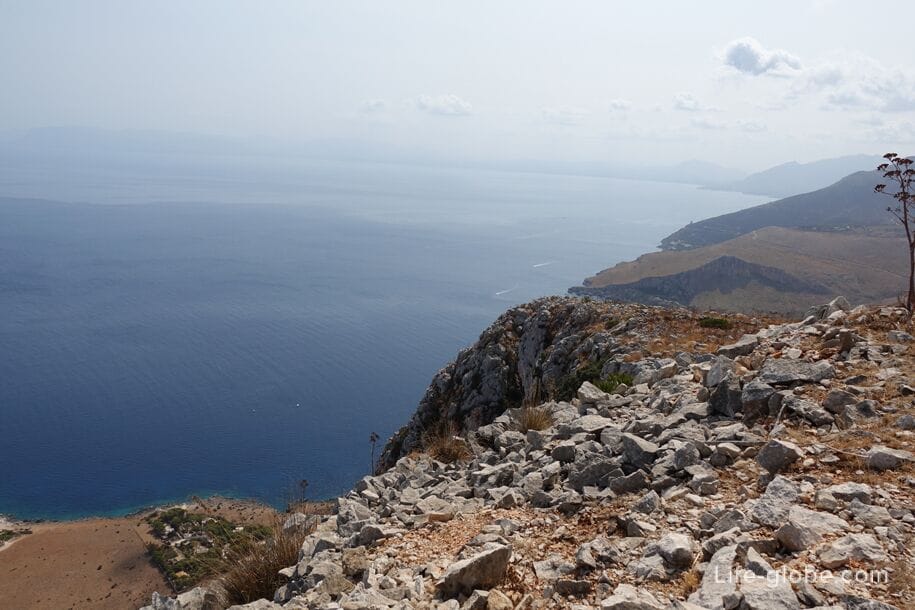 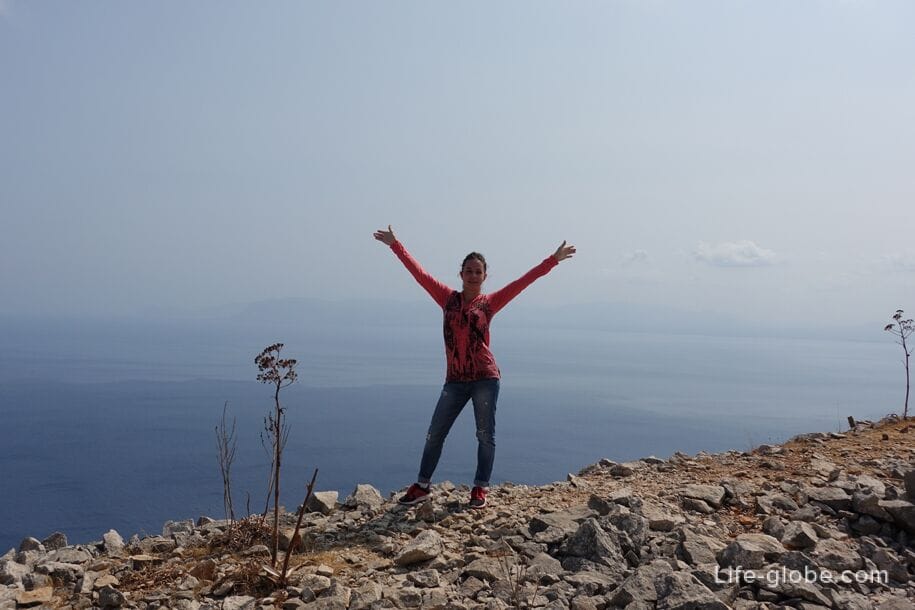 And for dessert - go to the wooden cross 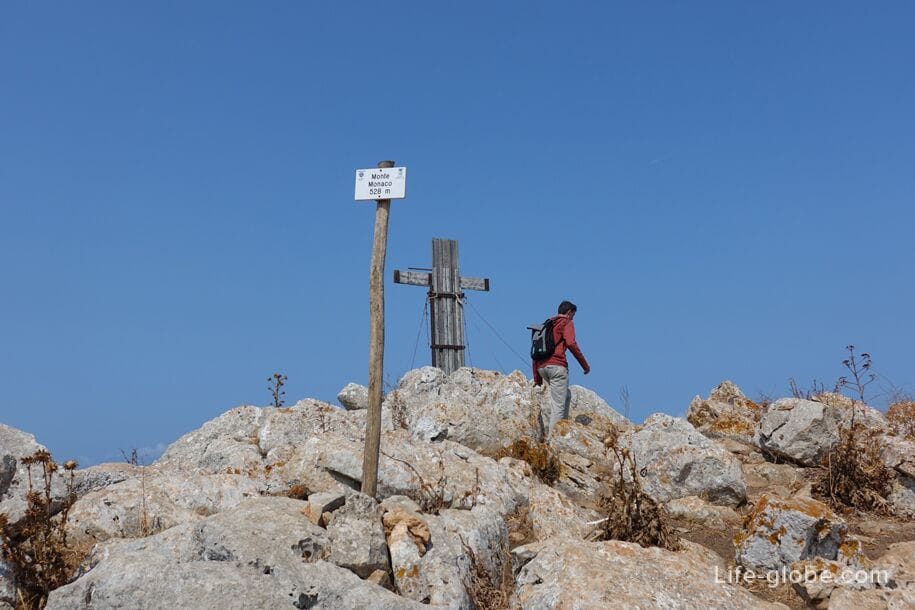 and here, the most beautiful thing is that it causes indescribable delight and for the sake of which most tourists make the hike up to San Vito Lo Capo, its amazingly beautiful coast with a gorgeous beach, as well as the surrounding area. 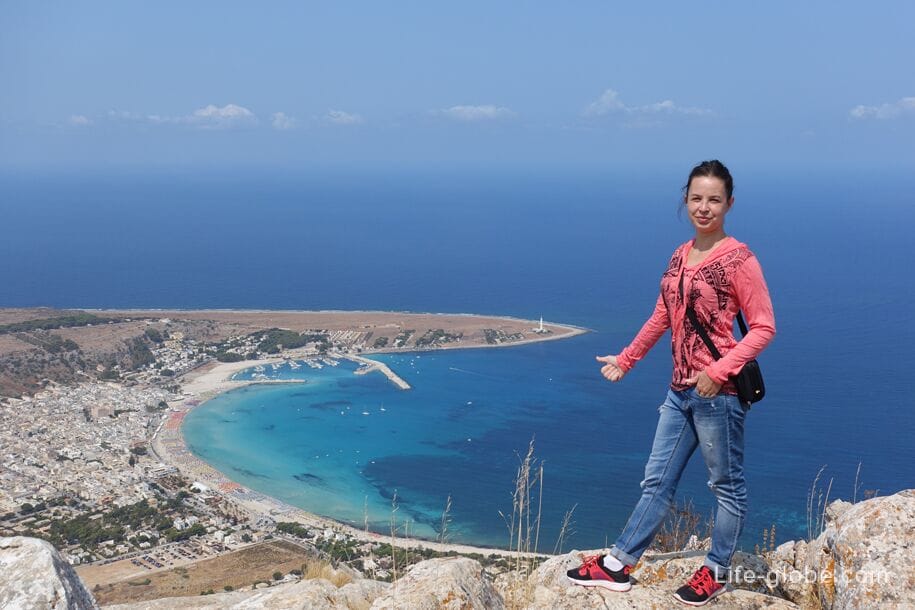 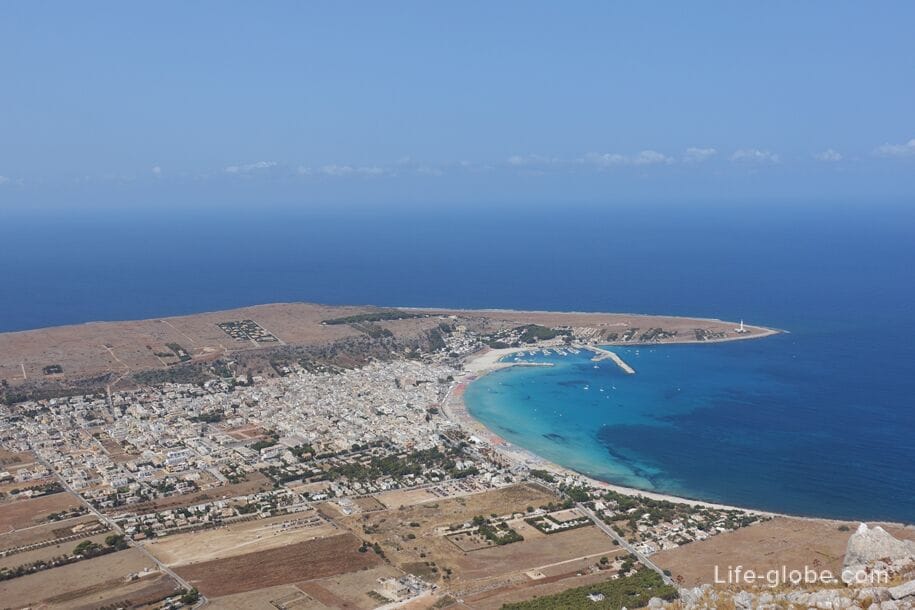 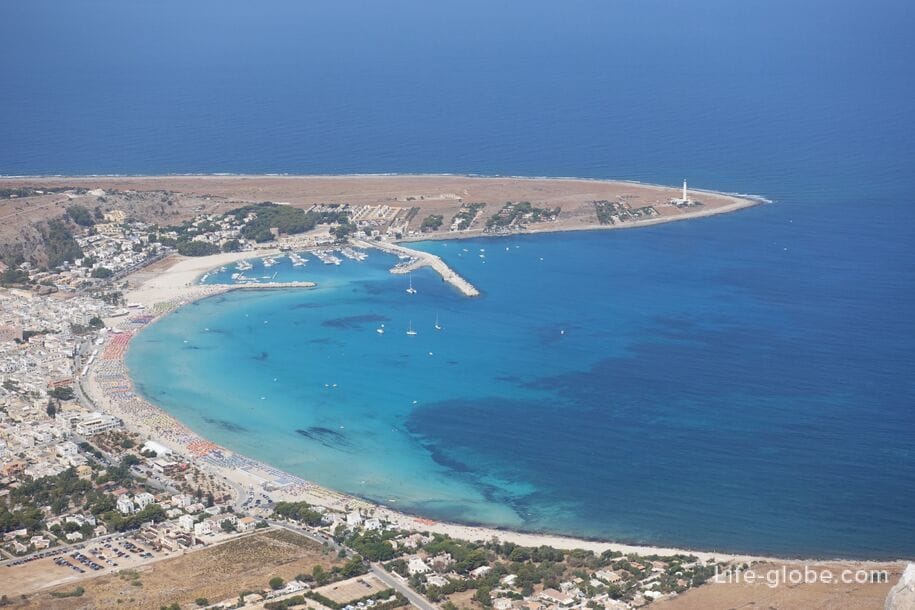 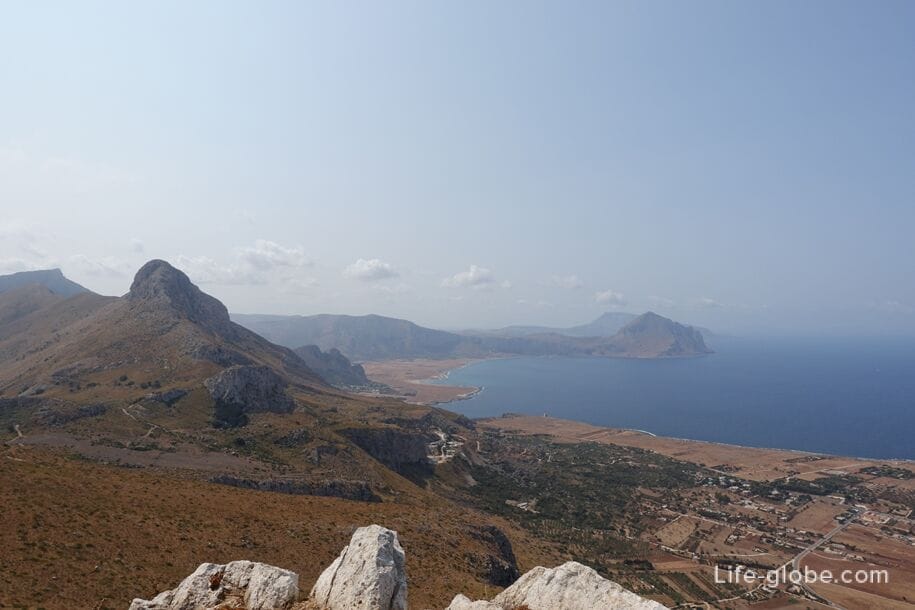 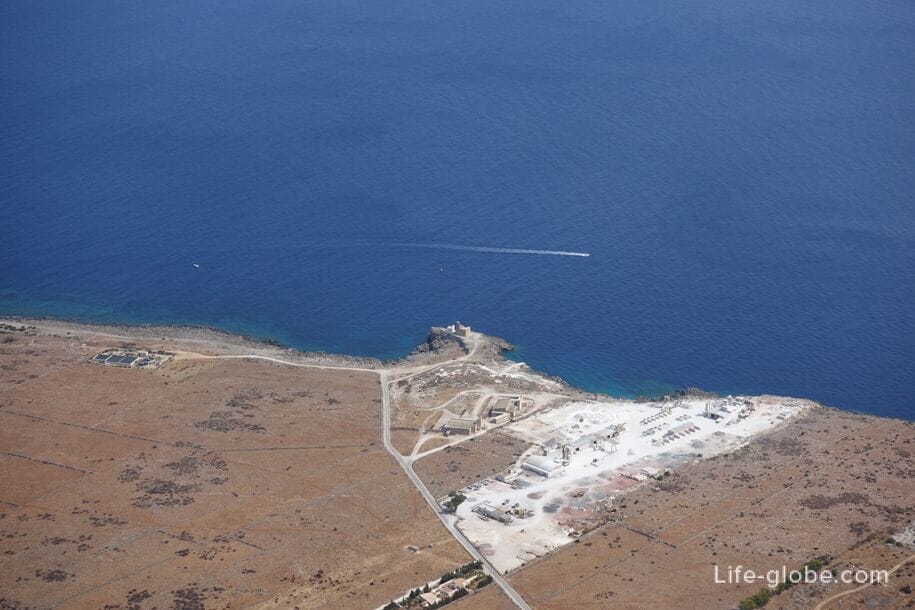 Needless to say, I think the photos of panoramic views have already said everything for themselves... It was one of the most unforgettable days spent in Sicily. This climb was worth it, we can confidently not just recommend, but insist that everyone who came to San Vito climbed to the top of mount Monaco!