The Alexander Column in St. Petersburg is a legendary monument, one of the unspoken symbols and a landmark of the city.

It is unlikely to pass by this column, since it has a total height of 47.5 meters, resembles the image of the triumphal buildings of antiquity and adorns the central square of St. Petersburg-Palace Square.

The column is sometimes called the "Pillar of Alexandria", after the poem "Monument" by A.S. Pushkin.

The column was built in the period from 1829 to 1834, by decree of Emperor Nicholas I in memory of his older brother Alexander I who defeated Napoleon.

The author of the project was the famous architect of French origin Auguste Montferrand, who is better known as the creator of the fourth St. Isaac's Cathedral, located near the column.

View of the Alexander Column and the Winter Palace 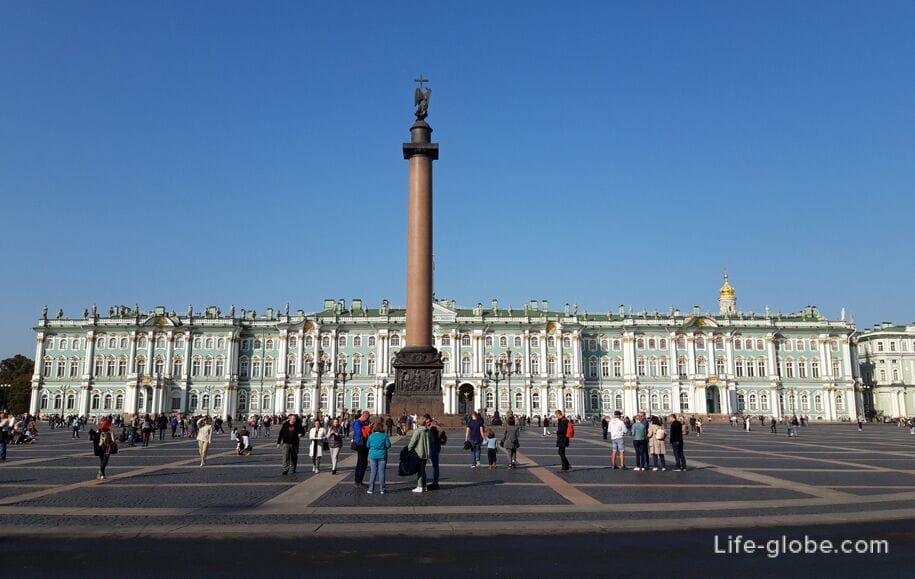 View of the Alexander Column and the General Staff building 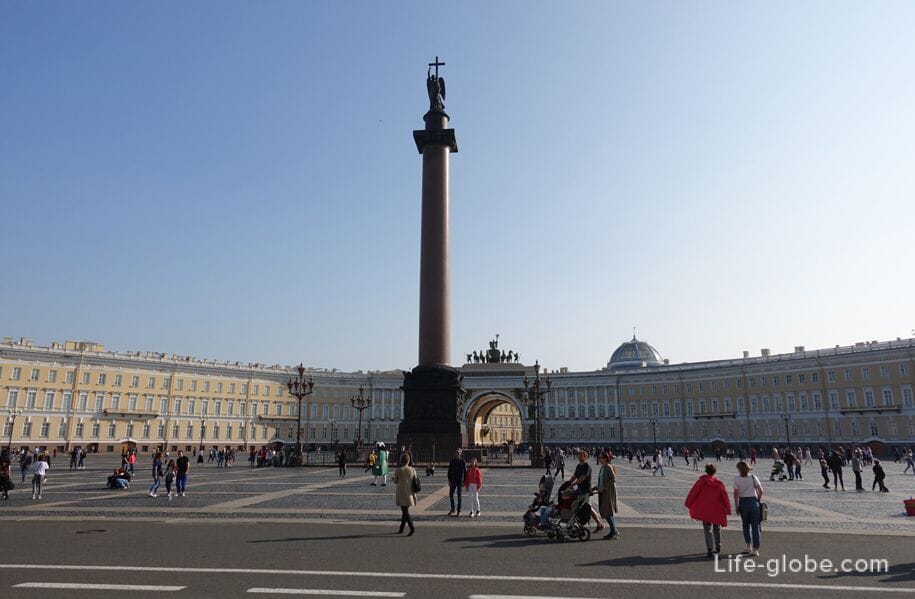 The column consists of a hewn solid monolith and has a height of 25.6 meters. The installation of the column on the pedestal was carried out according to the already worked-out scheme-on the basis of the developments of Lieutenant-General A. A. Betancourt on the installation of the columns of the porticos of St. Isaac's Cathedral. The lifting system is quite simple and consisted of scaffolding and a system of blocks. The column was reinforced with ropes, laid horizontally, and lifted by means of capstans driven by people.

The Alexander column was solemnly erected on a pedestal on August 30 (September 11, new style), 1832. The column's ascent took about two hours. Since then, and to this day, the trunk of the granite column, weighing 612 tons, stands on the base without any additional supports - only under the influence of gravity.

After the installation of the column, bas-relief slabs, decorative elements were fixed on the pedestal and the upper element of the column itself - the figure of an angel with a cross-was installed.

The final work on the decoration and polishing of the monument lasted two years.

The opening of the monument in the Empire style took place on August 30, 1834 as the final ensemble of the Palace Square. 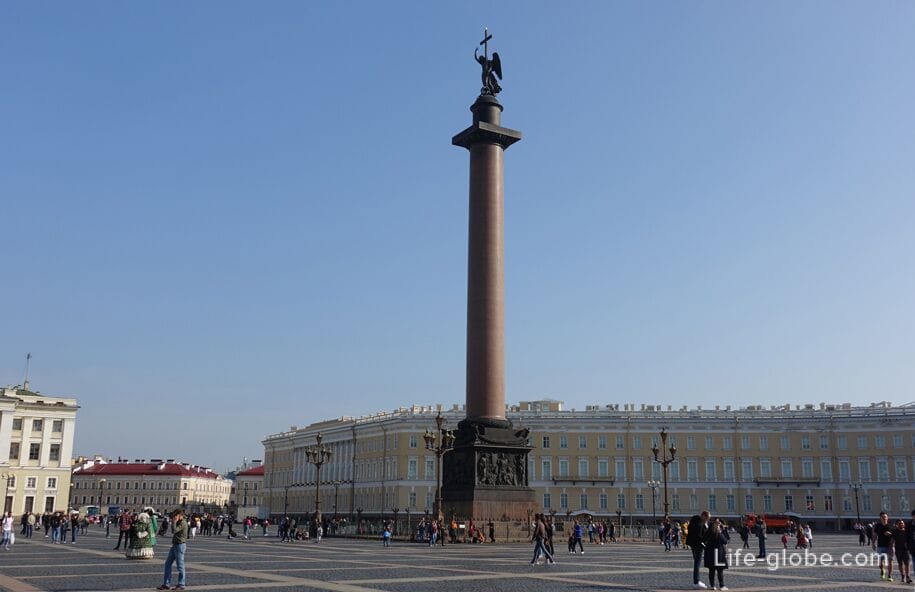 The pedestal of the column is surrounded by a decorative fence and on four sides is decorated with bronze bas-reliefs cast at the factory of C. Byrd in 1833-1834. The base of the column itself is framed by a laurel wreath.

The bas-reliefs in allegorical form glorify the victory of Russian weapons and symbolize the courage of the Russian army. 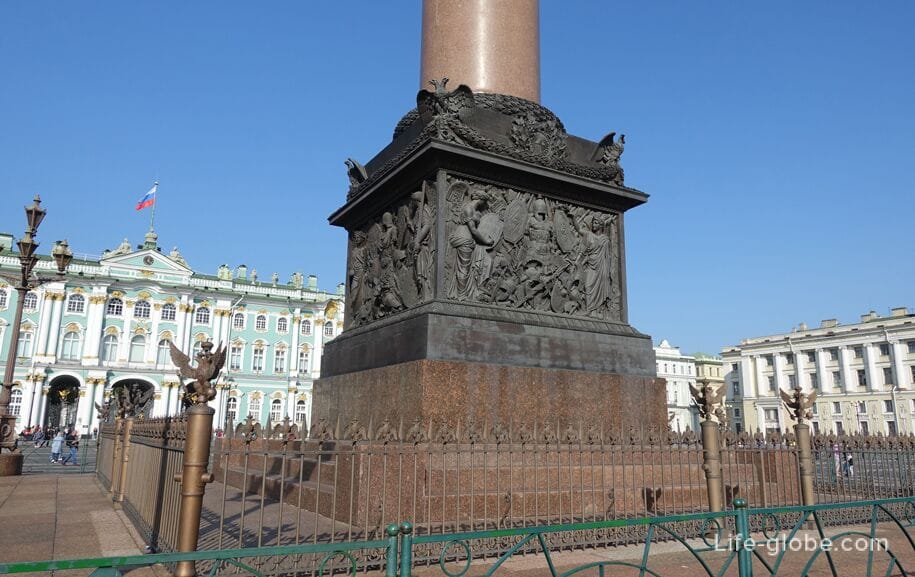 In the center of the northern bas-relief (facing the Winter Palace) is an exact copy of the samples of armor from the Armory in Moscow. Above the armor is a rectangular plaque with the inscription "Grateful Russia to Alexander I", which is held by allegorical winged female figures.

In the lower part of the bas-relief, two figures are symmetrically arranged: on the left, the figure of a young woman leaning on an urn from which water is pouring out; on the right , an old aquarius. The figures represent the Vistula and Neman rivers, which were crossed by the Russian army during the pursuit of Napoleon.

Above the bas-relief is an All-Seeing Eye, in a circle of an oak wreath and with the inscription "1812", under it (on the ledge of the cornice of the pedestal) - an oak garland, which is held in the paws of two-headed eagles. 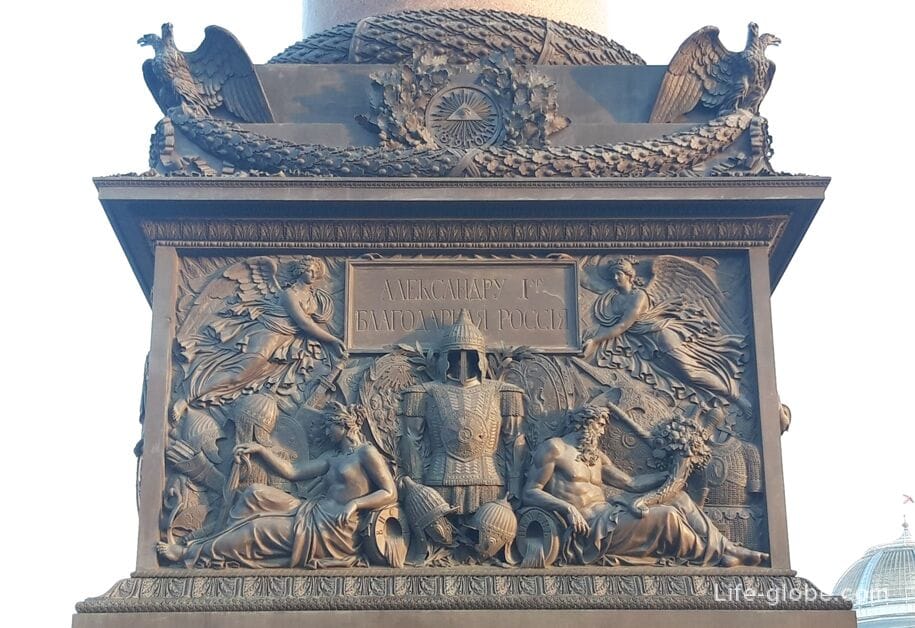 Above the bas-relief is an oak garland, which is held in the paws of two-headed eagles. 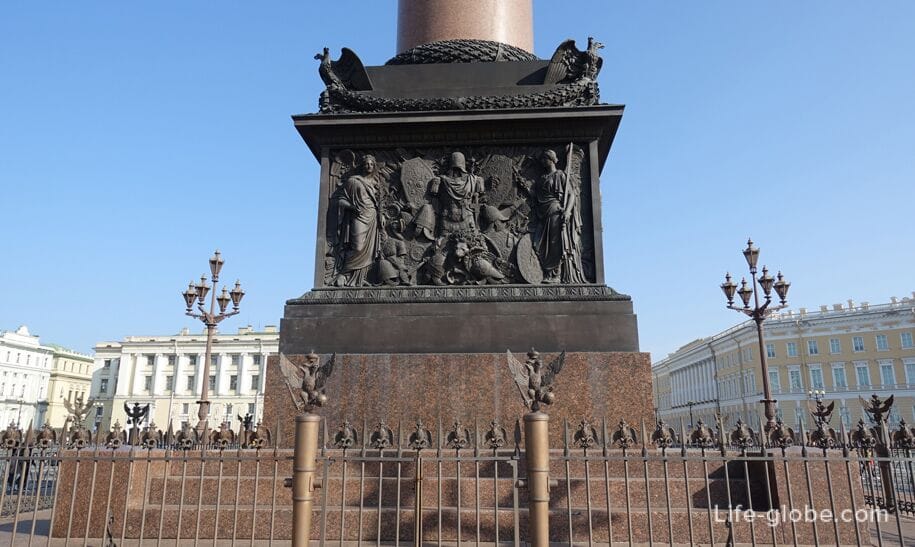 The southern bas-relief (facing the arch of the General Staff) represents victory and glory.

On the left side, the bas-relief depicts a female figure who records the dates of memorable battles on the Victory shield "1812, 1813, 1814". 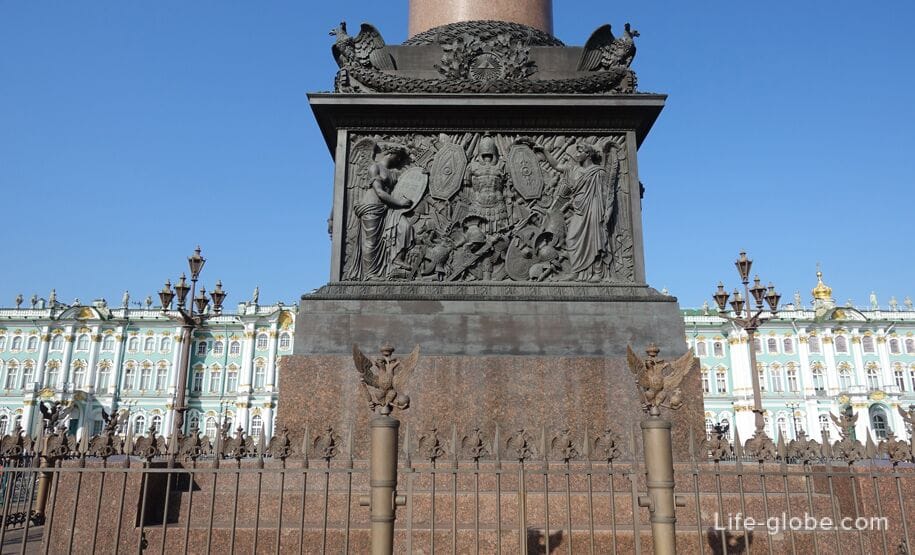 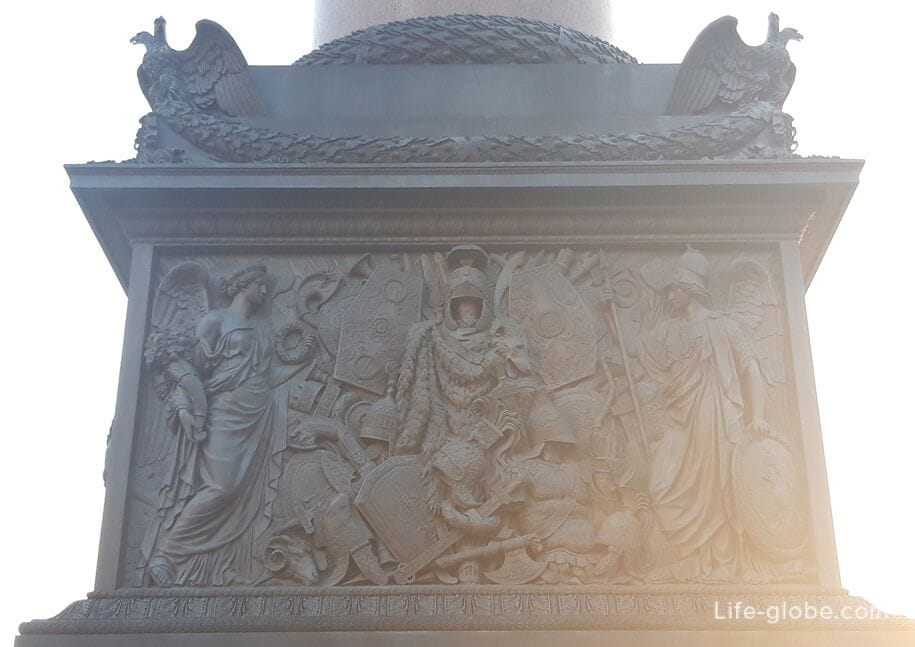 The upper part of the column is crowned by a bronze capital of the Doric order and a bronze cylindrical pedestal on which there is a figure of an angel, made by the sculptor Boris Orlovsky.

The angel faces the Winter Palace. His head is tilted to the right, and his gaze is directed down. The figure of an angel raises its right hand to the sky, and with its left hand it holds a four-pointed Latin cross. 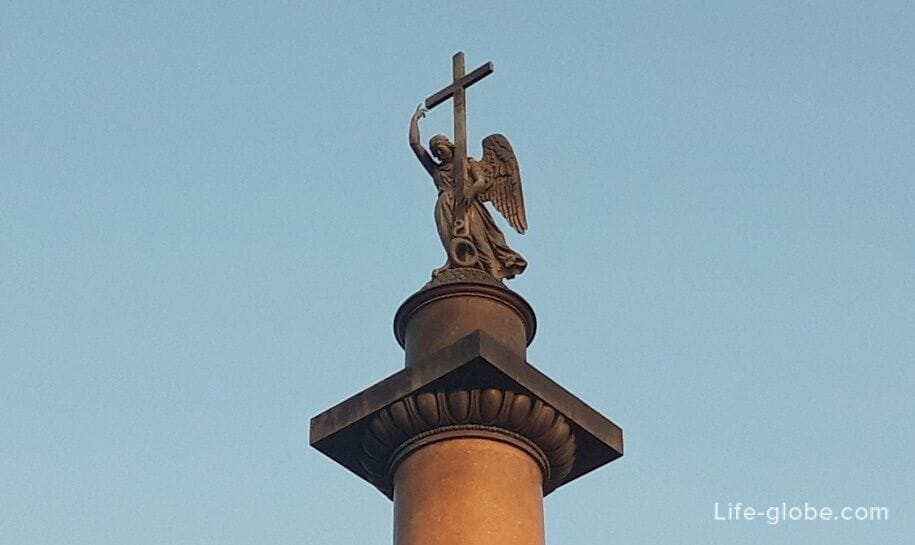 After the opening of the column, which is not fixed, but is held only by its own gravity, the residents of St. Petersburg, fearing that the column would fall, tried to avoid it and stay away. To remove the fear from the residents of the city, Montferrand himself walked his dog near the column in the evenings.

During the construction of the column, it was said that the monolith turned out completely by accident - during the creation of a number of columns for St. Isaac's Cathedral. Since the column turned out to be higher than the Isaakievskys, it was decided to put it on the square.

Often newlyweds come to the Alexander column. According to the ritual, the groom carries the bride in his arms around the pillar. The belief says how many times a newly-made husband with his wife in his arms will go around the column, so many children will be born to the couple.

On September 25, 2009, the Bank of Russia issued a commemorative coin with a face value of 25 rubles, dedicated to the 175th anniversary of the Alexander Column in St. Petersburg. The coin is made of 925 sterling silver with a circulation of 1000 copies and a weight of 169 grams.

All accommodation facilities in Saint Petersburg, including in the city center and near the Palace Square, can be viewed and booked here 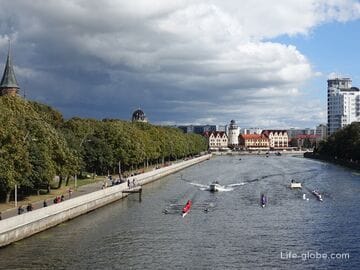