The Wallenstein Garden and Palace (Valdštejnský zahrada, Valdštejnský palác) is a beautiful Baroque palace and park complex in Prague, originally serving as a private residence, and today is a place of parliament, tourism and recreation.

The Wallenstein Palace is the largest palace in Prague.

The complex is located in the historical center of Prague in the Malá Strana district, which is near Prague Castle.

Anyone can walk in the garden adjacent to the palace. During the summer months, musical concerts and theatrical performances take place in the garden. 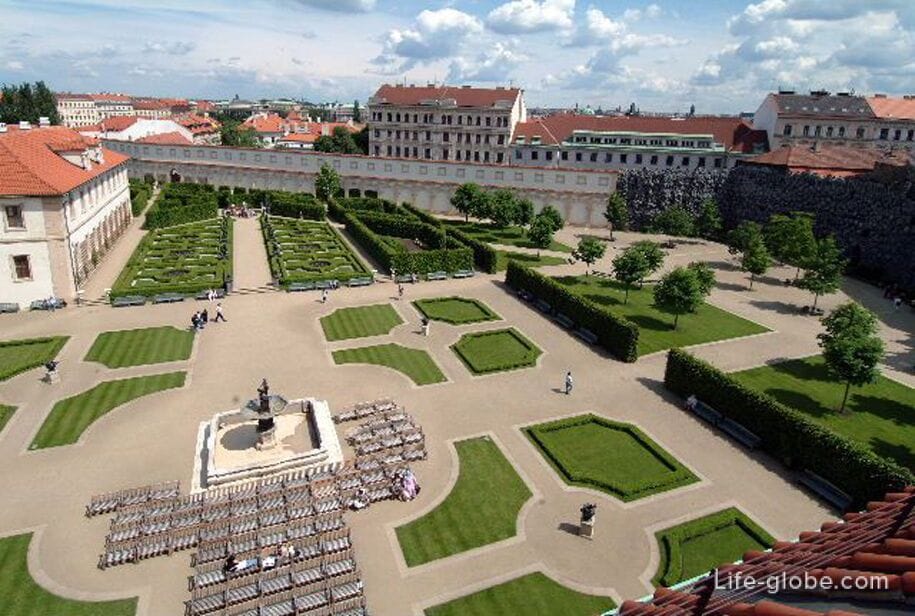 The early Baroque Waldstein Palace was built between 1623 and 1630, on the site of 26 houses, 6 gardens, 2 brick factories and one plot of land, as a Prague residence for one of the powerful and wealthy Czech nobles, Field Marshal Albrecht von Wallenstein. The palace was built according to the project of the Italian architect Andrea Spezza.

From the moment of completion of the construction until his death (he was killed as a traitor) in 1634, Albrecht Wallenstein did not stay long, about 12 months, within the walls of the palace. Some sources even claim that he stayed in the palace for only 80 days.

Today, the Senate of the Czech Republic is located in the walls of the palace.

The architecture of the palace is a mixture of a city palace with an Italian villa. The palace consists of hundreds of functional or blind windows, dozens of portals, as well as stucco decorative elements featuring a lion's head - a heraldic motif from the Wallenstein coat of arms.

The palace has an inner courtyard. 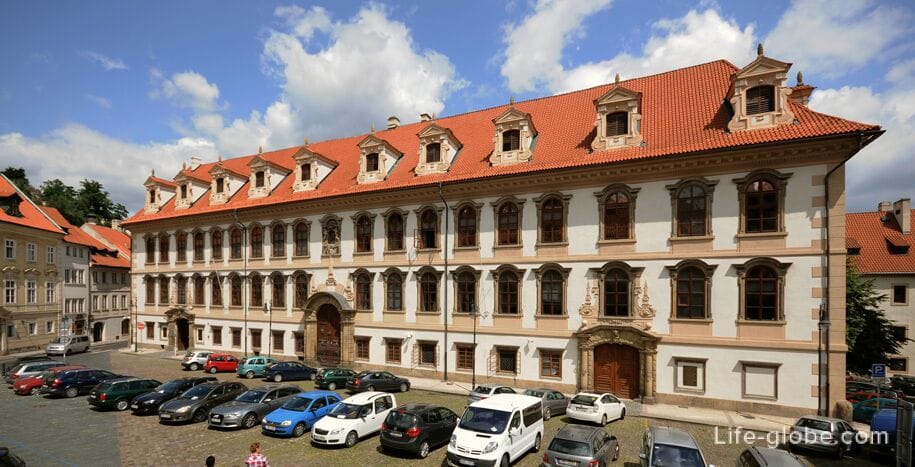 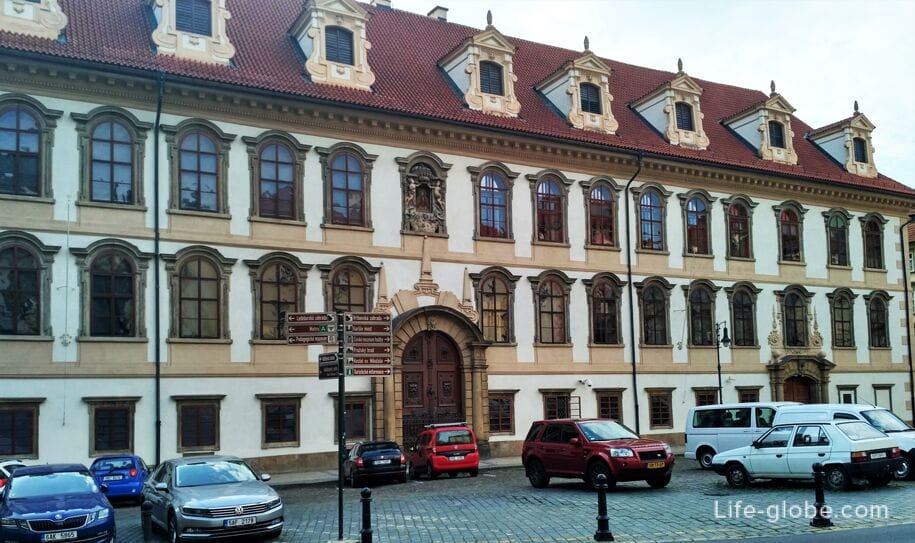 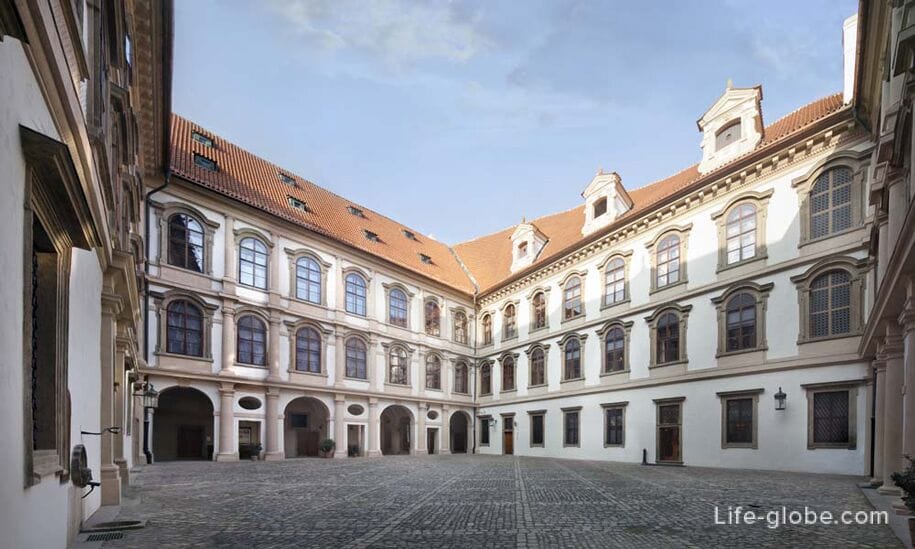 Halls and rooms of the Waldstein Palace

The interior of the palace is decorated with frescoes, stucco and marble cladding.

The largest hall, having a height of two floors, is The main (Ceremonial, Knight's) hall. The fresco by Baccio Bianco in the stucco vault of the hall depicts Albrecht Wallenstein in the form of the god Martha on a chariot drawn by a quadriga of horses, with military trophies and emblems around him. 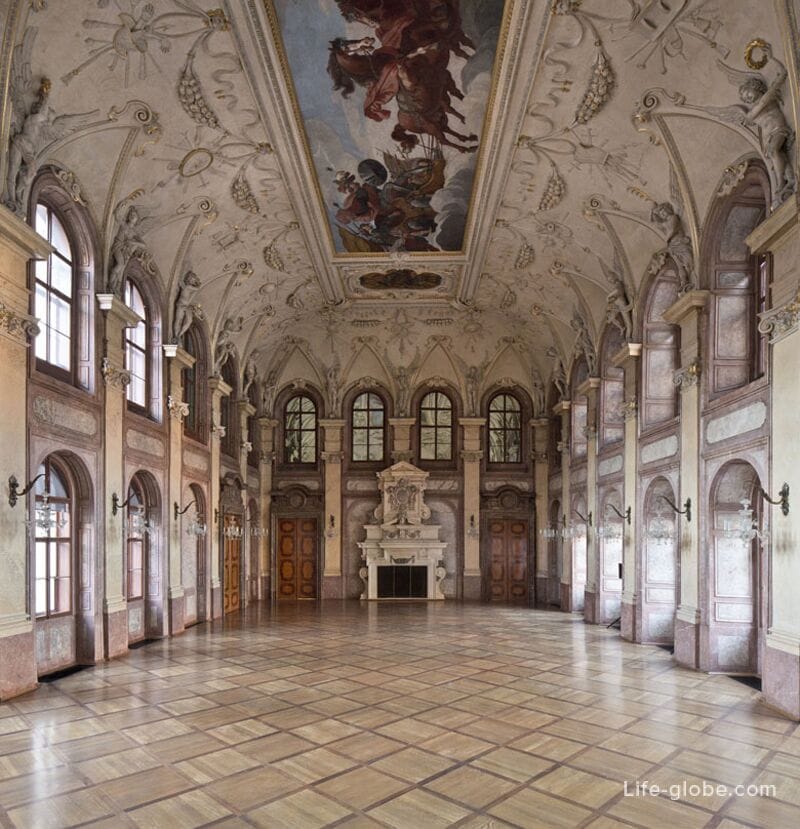 Other halls and rooms of the Waldstein Palace:

- Leather hall (originally Knightly), the walls of which were papered with calfskin wallpaper decorated with gold. The modern cladding is a copy of the mid-19th century.

The ceiling is decorated with a fresco by Peter Meitzner depicting Pallas Athena. Above the fireplace there is a painting "The Battle of Lutzen" with the image of Albrecht Wallenstein sitting on a horse. In this battle near Leipzig, his beloved horse was killed, so he stuffed him and put him in the palace;

- Audience Hall, which is a round room with a domed ceiling, decorated with frescoes by Baccio Bianco, illustrating mythology, as well as an allegory of the four seasons and four periods of the day. A private staircase leads from the Audience Hall to the Astrological Corridor on the second floor;

- Astrological corridor, richly decorated with astronomical and astrological motifs, mainly the work of Giovanni Pieroni, a famous mathematician and astrologer, a student of Galileo Galilei; 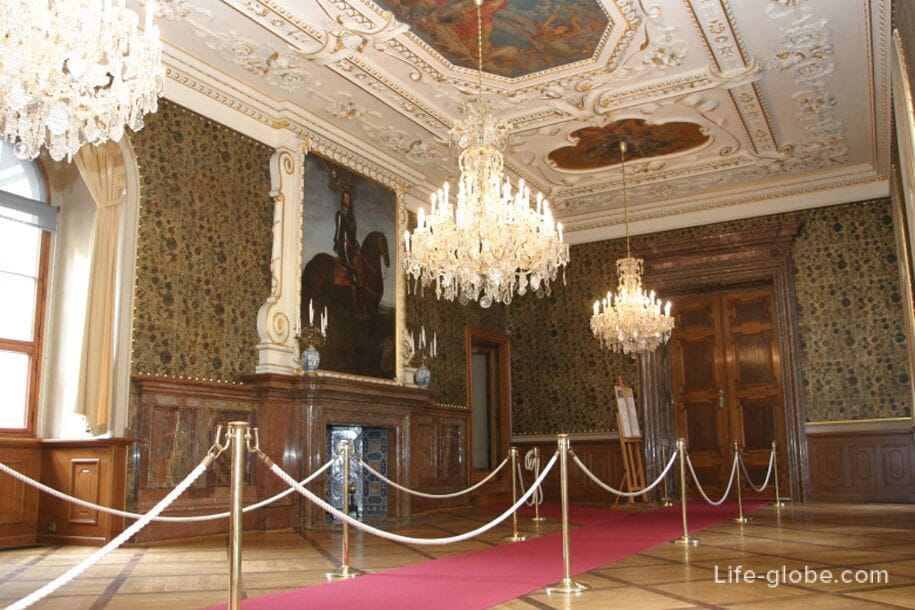 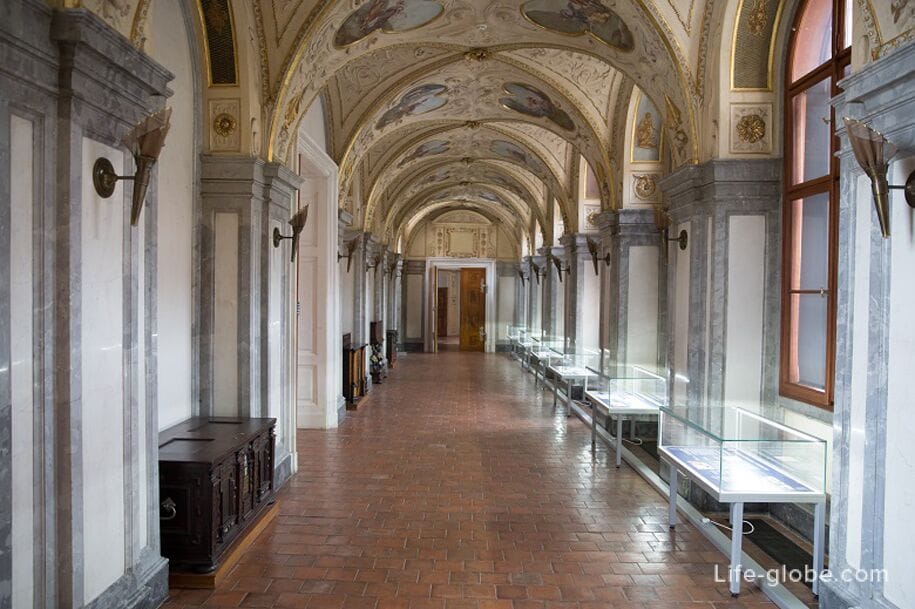 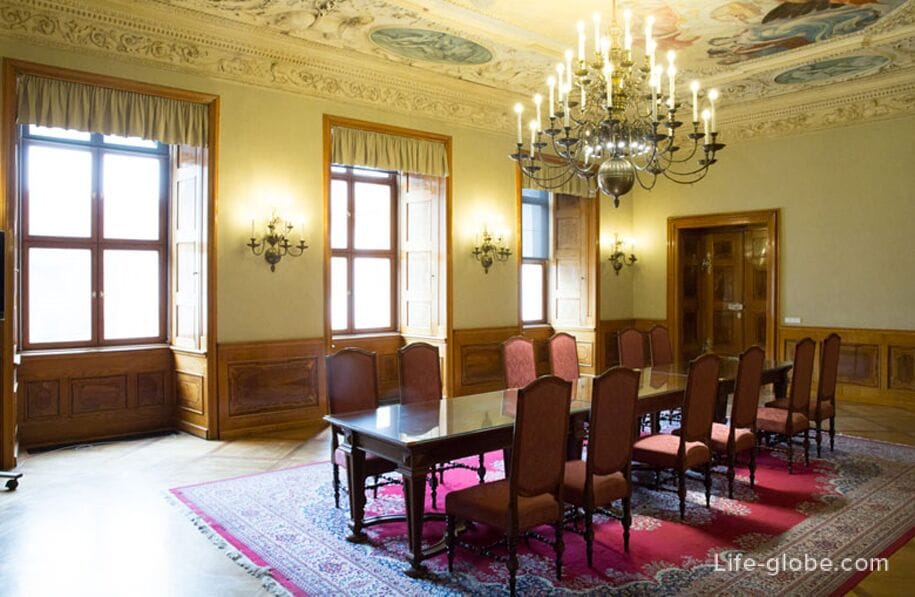 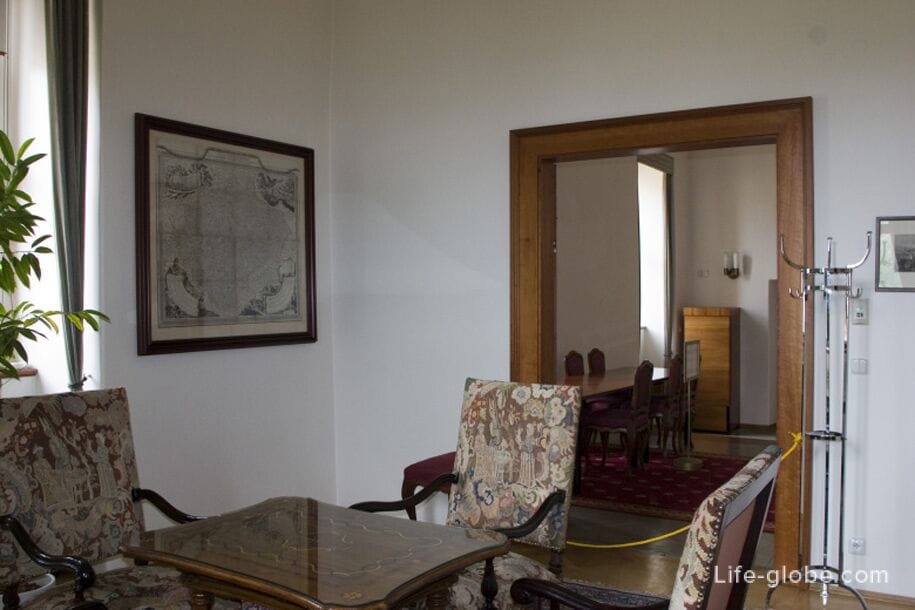 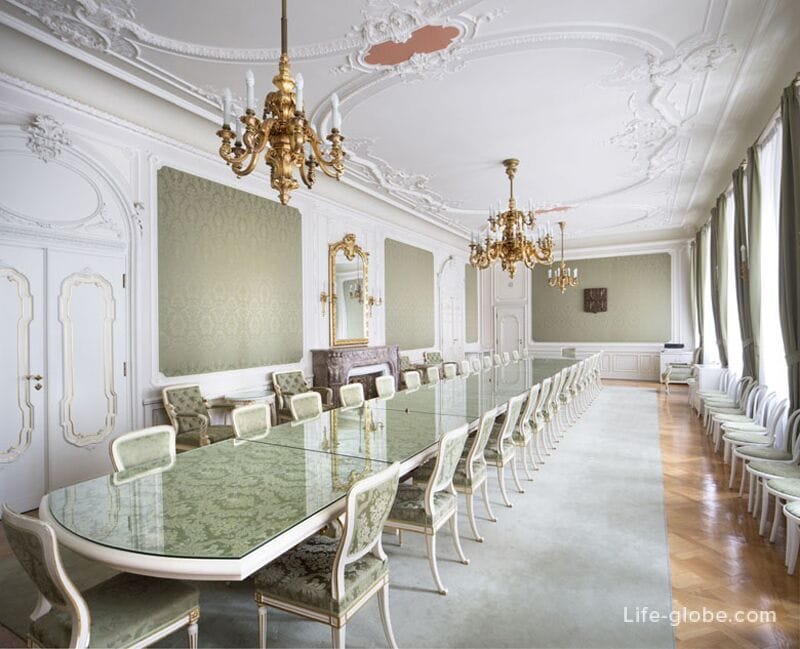 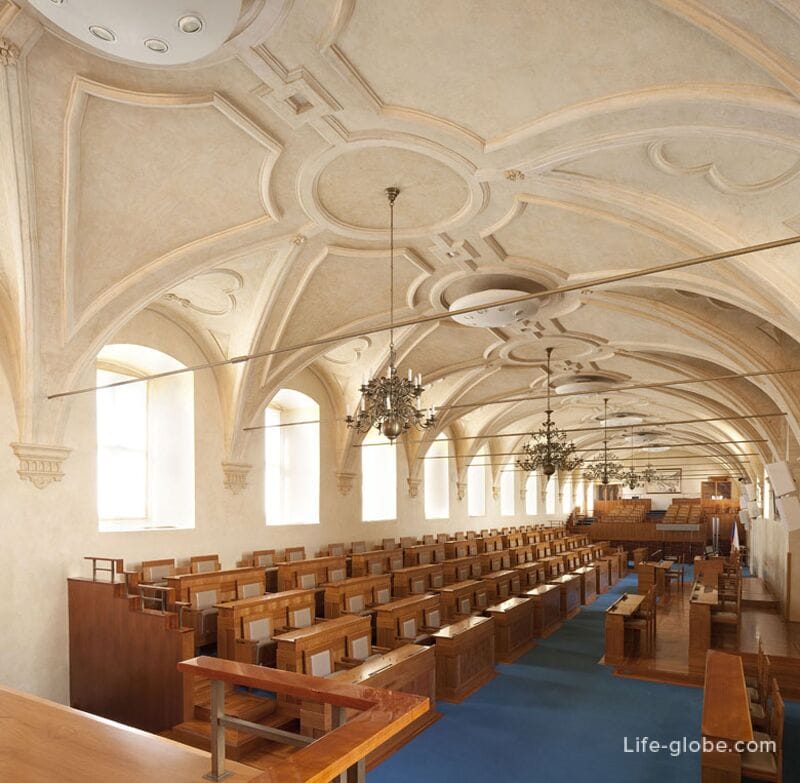 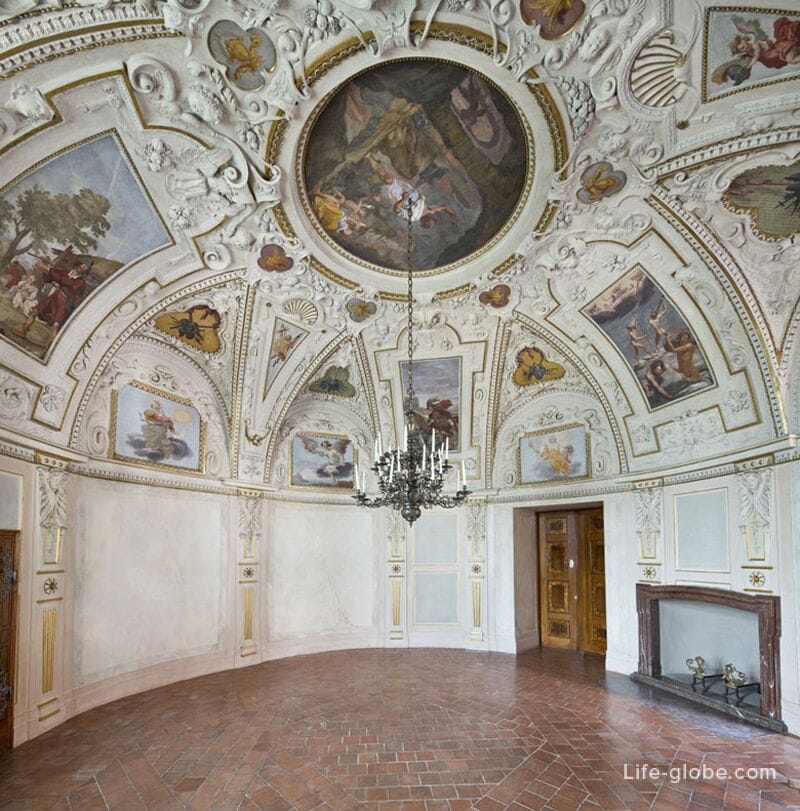 Adjacent to the Waldstein Palace is the large Waldstein Garden (Valdštejnská zahrada) in the Italian Baroque style.

The garden was created in parallel with the construction of the palace and subsequently underwent alterations.

The Waldstein Garden is the second largest garden in the center of Prague, after gardens of Prague Castle.

A grotto wall has been created in the garden, there are sculptures, a fountain and an artificial lake with an island. We used to go boating on the pond.

The pride of the garden are peacocks, which have been bred here since 2000 and bring young almost every spring. The garden is also a refuge for green-footed boobies or mallards and large owls. Catfish, pike and koi carp live in the garden pool.

Oaks, maples and magnolias grow in the garden. The central part of the plot is planted with boxwood bushes and tulips. Hydrangeas grow near the stalactite wall, and between the vines and the fig tree at the southern wall of the Waldstein Palace you can see crocuses, daffodils and lavender.

The Wallenstein Garden is truly an oasis of peace in the very center of Prague, which anyone can visit. 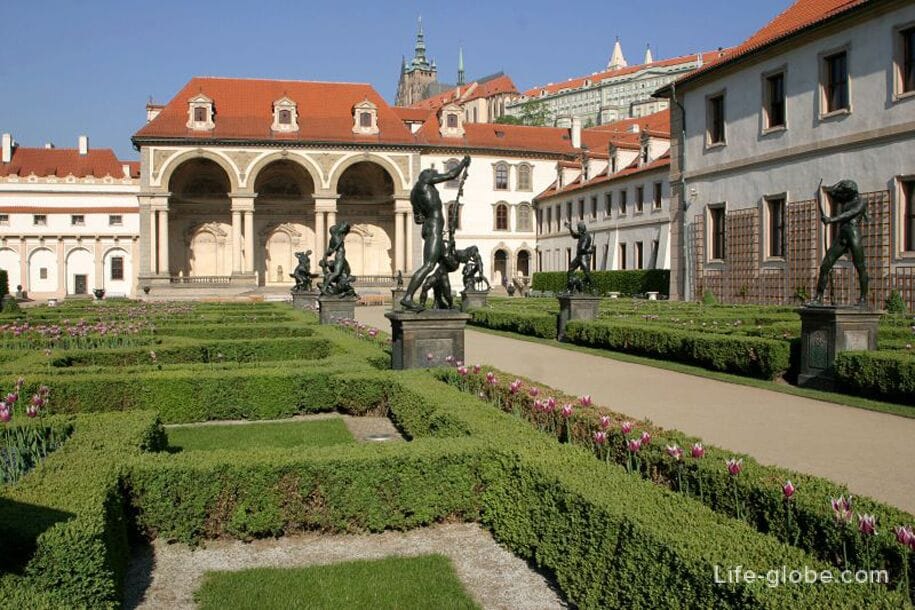 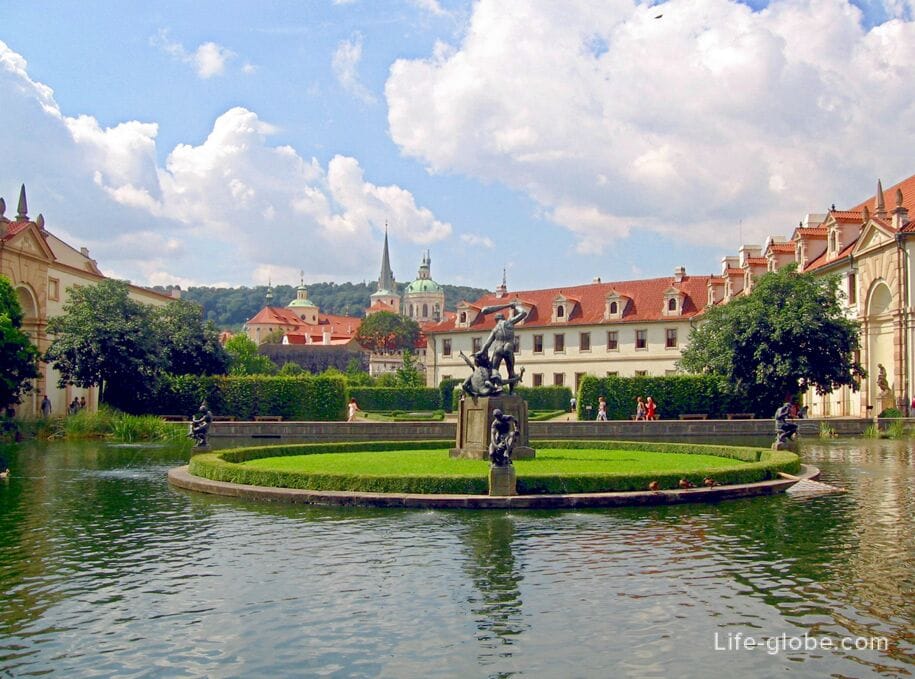 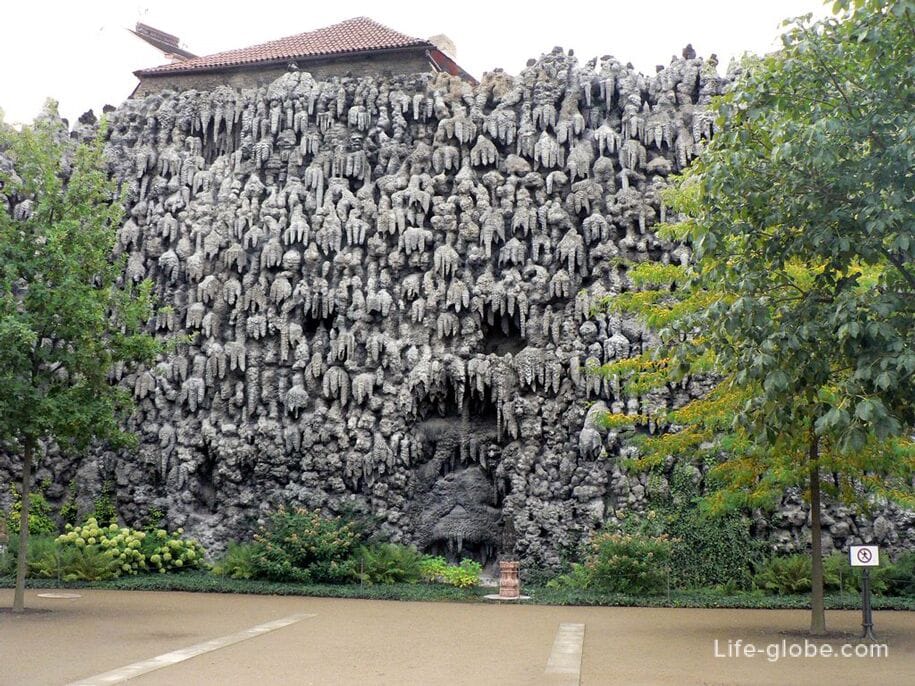 Special attention in the garden deserves the open hall of the first floor (Sala terrena) - an open building corresponding in height to the Main Hall. It had no analogues either at the time of its creation or later.

The nature of the decoration of the garden hall coincides with the decoration of other rooms of the palace. The ceiling is decorated with frescoes divided into three sequences of the Greek Olympus: in the middle is depicted Zeus with Hero and Venus, on the south side - the gods of the Trojans and in the north - the gods of Helen. The medallions around Olympus depict the heroes of the Trojan War, the theme of which is contained in three lunettes on the front wall. 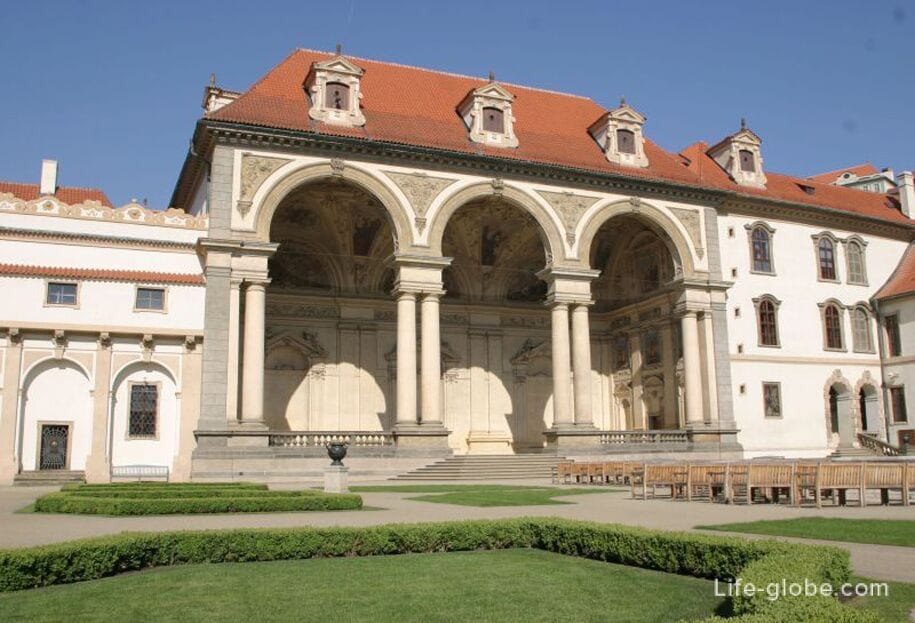 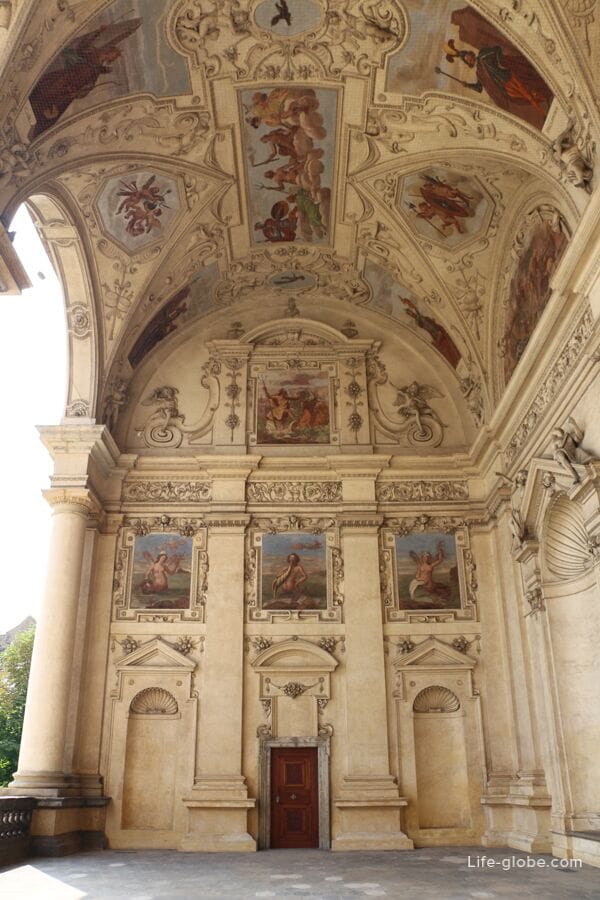 In the Waldstein Palace, you can visit the courtyard and some halls: the Great (Knight's) Hall, the Leather Hall, the Hall of Mirrors, the Audience Hall, the Mythological Corridor, etc.

The halls are available for visits on certain days and hours. Admission is free.

Texts in Czech and English are available in all halls. The entrance is from the Waldstein Square.

Short-term exhibitions are held in the premises of the palace.

The palace garden can be visited free of charge during the summer months. In summer, the garden hosts free music concerts and theatrical performances.

The exact days and times of a possible visit to the palace and garden, as well as the schedule of events and other necessary information, we recommend checking on the official website of the Senate of the Czech Republic: senat.cz/informace/pro_verejnost. 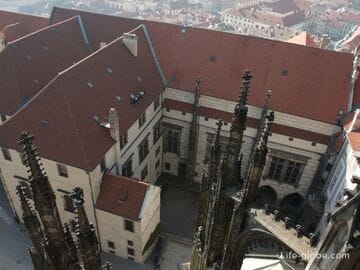 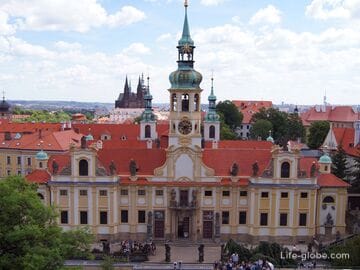 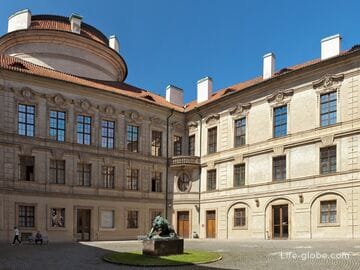