The Prague Loreta (Czech name: Loreta Praha) is a grandiose complex of historical buildings in Prague, on the eastern side of Loreto Square (Loretanské námĕstí) in the Hradčany district.

Today the complex is a place of pilgrimage and a museum that can be visited. It contains: chapels, the Church of the Nativity of the Lord, the treasures of Loreto and Loreta itself (the Holy Hut).

There are guided tours around Loreta. Exhibitions and concerts of organ music are also held in the Prague Loreta. 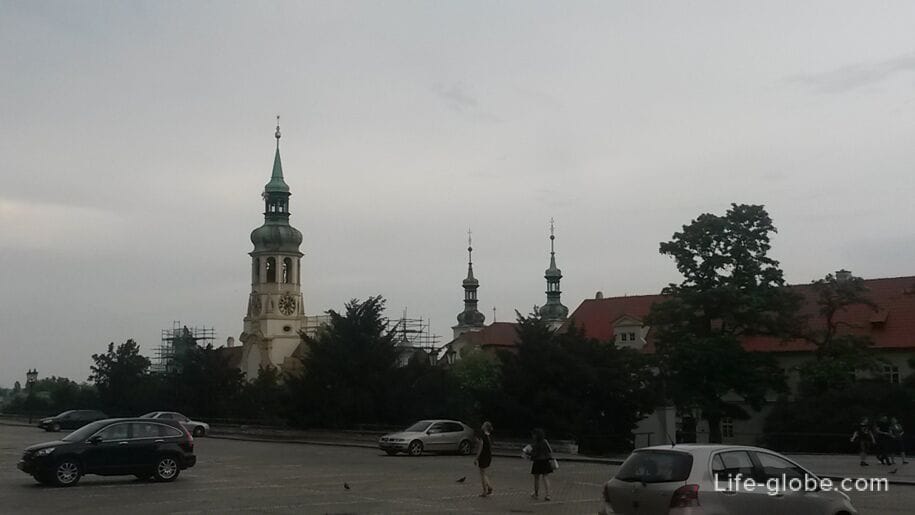 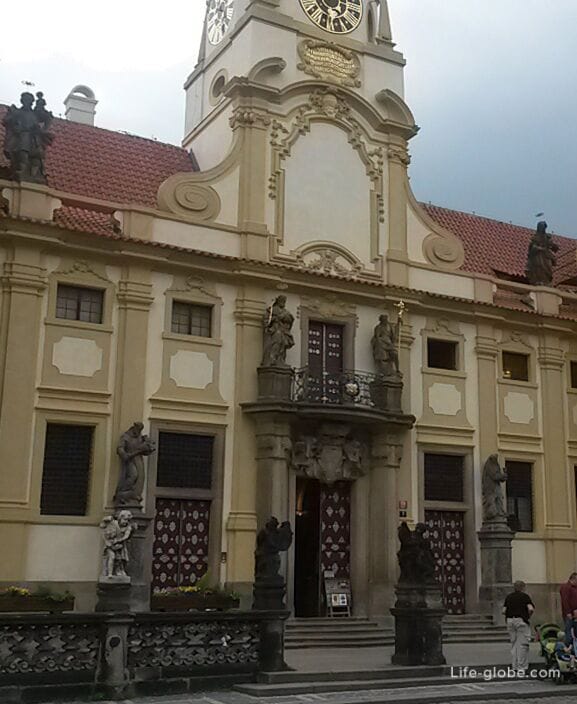 Loreta or Holy Hut (Holy Hut of the Virgin Mary) is a small building in the complex, from which its history began.

The Holy Hut was originally the house where the Virgin Mary lived in Nazareth (Palestine), where the archangel Gabriel told her that she would become the mother of Jesus Christ.

The holy hut became a very revered relic after the death of the Virgin Mary. The hut was badly damaged after the Saracens (Muslim Arabs) invaded Palestine. According to legend, when the Crusader army left Palestine in 1291, a miracle happened - the angels moved the Holy Hut first to Dalmatia, and from there to a city in the north Italy, to the laurel grove, after which the city was named Loreto. But probably the pope moved Loreta from Nazareth in the 13th century.

Copies of the Loreta were built in European cities. This did not bypass the Czech capital, Prague.

The construction of the Prague Loreta was initiated by the noblewoman Katerina Benigna from the Lobkowitz family, who allocated land to Lobkowitz and called from Vienna (Austria) by the builder Giovanni Battista Orsi. After Orsi's death, the Loreta was completed by Andrea Allio. The construction of the Prague Loreta began in 1626, and the consecration took place on March 25, 1631.

Countess Lobkovitsova installed the tomb of the Lobkovitsa family under Loreta (today the crypt).

The Countess entrusted the spiritual management of the sanctuary to the Capuchins.

In the future, the complex became a popular place of pilgrimage. It was being completed and expanded.

The facade is decorated with three-dimensional sculptures, and the terrace in front of the Loreta is framed by a balustrade with sandstone statues of angels by Ondrej Philip Kvittiner (mostly copies). 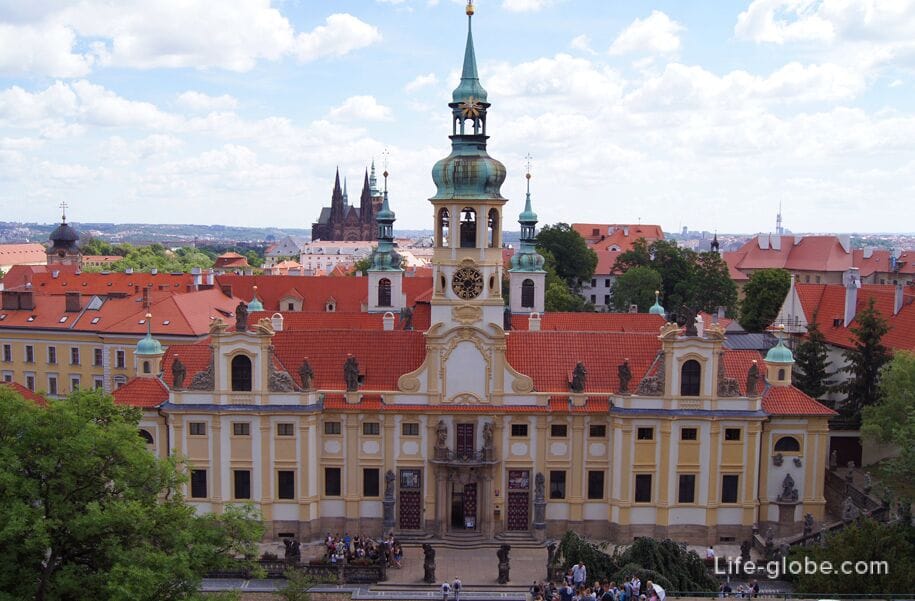 In the middle of the facade stands an octagonal bell tower from 1863 with a clock, which houses a unique musical instrument in Bohemia.

The clock mechanism driving the bell was designed by the watchmaker Peter Neumann in 1694, the bells were cast by the Amsterdam bell ringer Claude Fremy.

There are 30 bells in the carillon, 27 of them play the melody of Mary, baroque music, etc.

The schedule of carillon concerts and melodies can be clarified on the official website of the Prague Loreta (the site is listed at the end of this article). 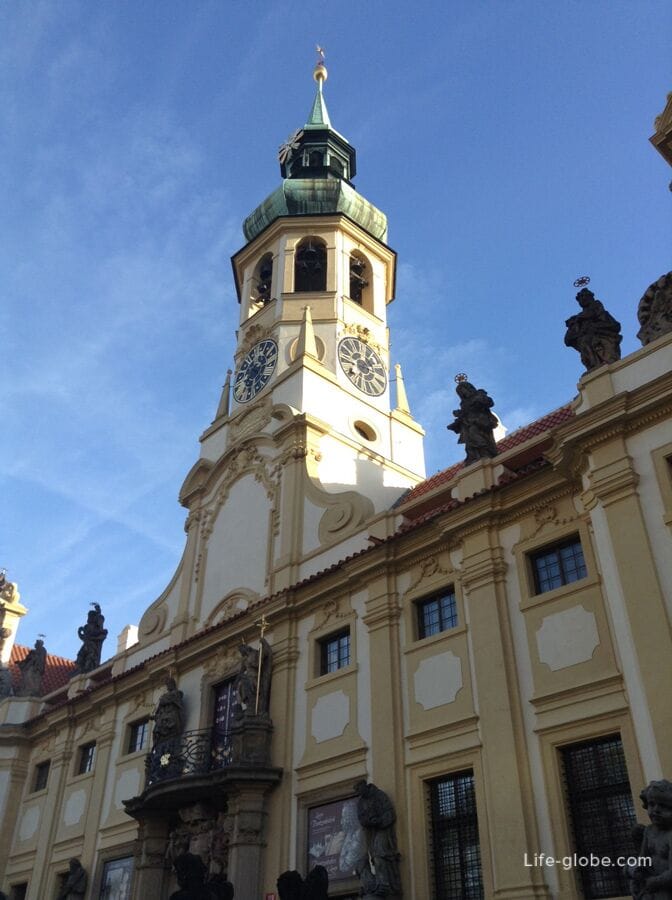 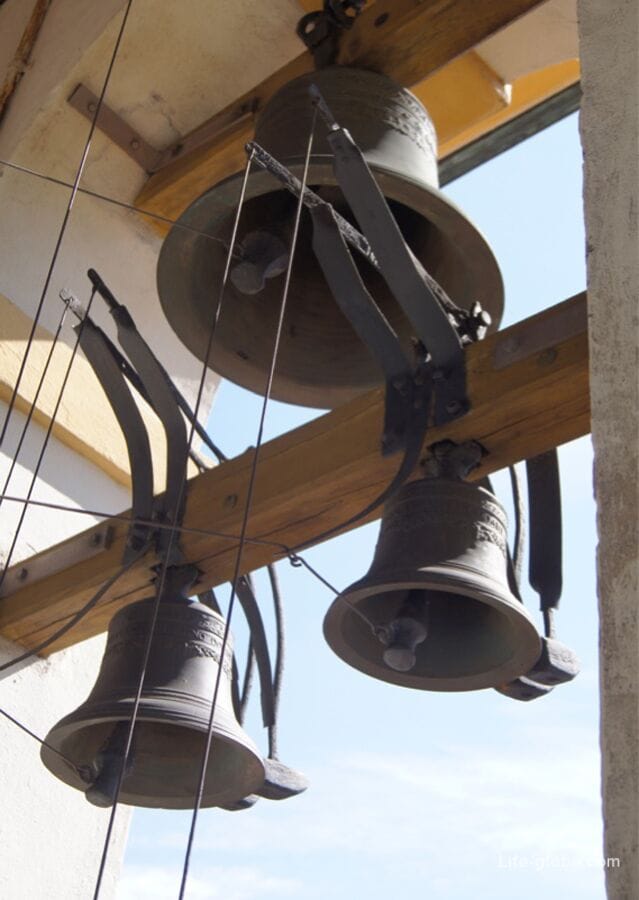 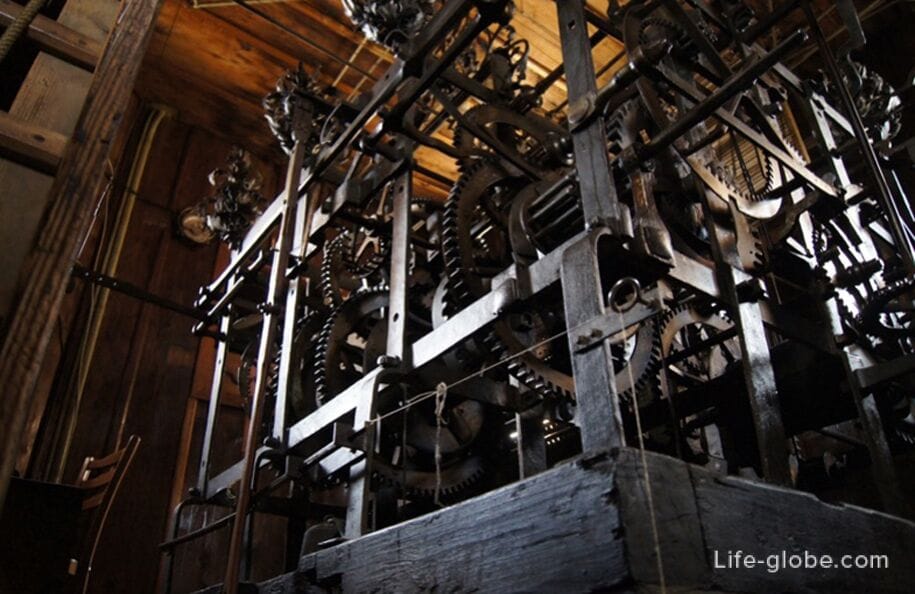 The holy hut is located in the middle of the courtyard, surrounded by six chapels.

The Renaissance architectural design of the marble cladding of the house (the work of the famous architect Donat Bramant) attracts attention, which protects the appearance of the chapel as a reliquary.

According to the hut in the Italian Loreta, there is an artificial crack in the Prague hut where a lightning strike was supposed to wake up the villagers to protect the hut when a thief entered it.

The hut is decorated with reliefs by Giovanni Bartolomeo Comet, who imitated the originals of Sansovina. One of the reliefs resembles the legend of the transfer of the house. 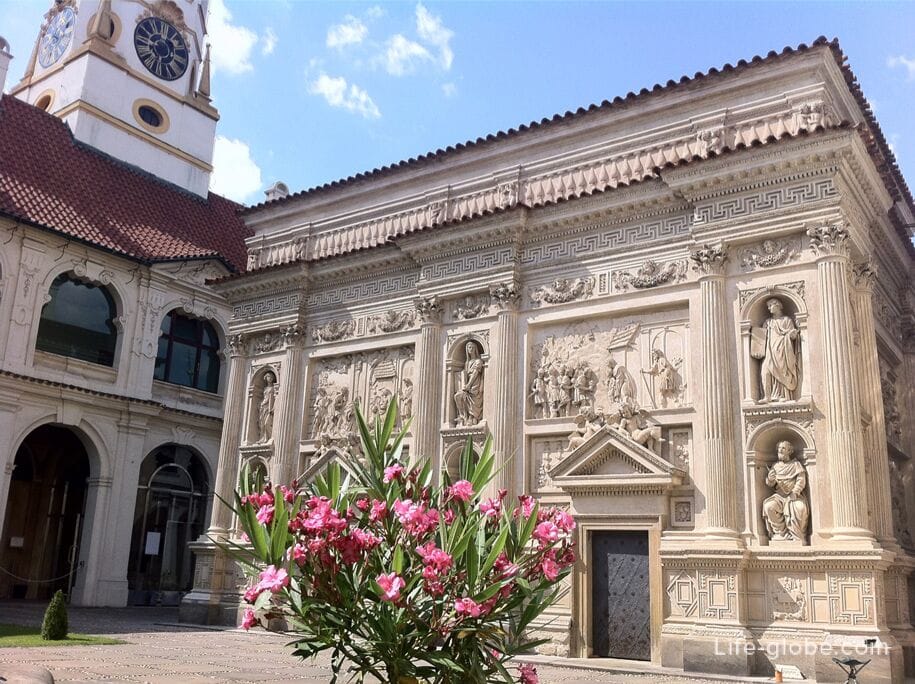 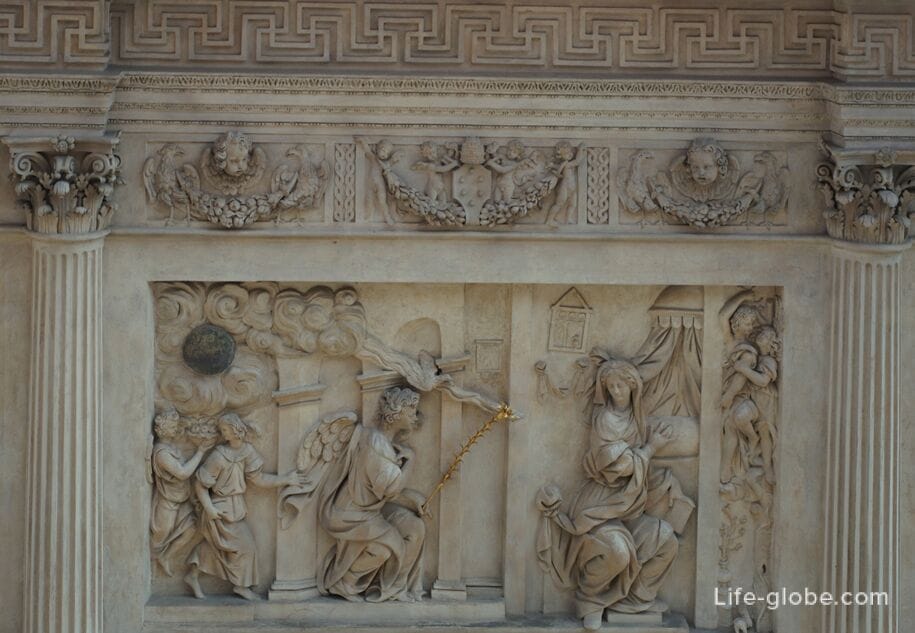 The original interior of the Loreta was destroyed by fire in 1921.

Inside the Loreta, there is an altar, where a silver plate depicts the Virgin Mary of Loreto with Jesus 110 centimeters high in the 1920s, carved from linden wood. The Madonna statuette has a dark color, which brings it closer to the Italian original made of cedar wood. This Italian medieval statuette turned black over time, and the early lighting of candles near it also played a role. 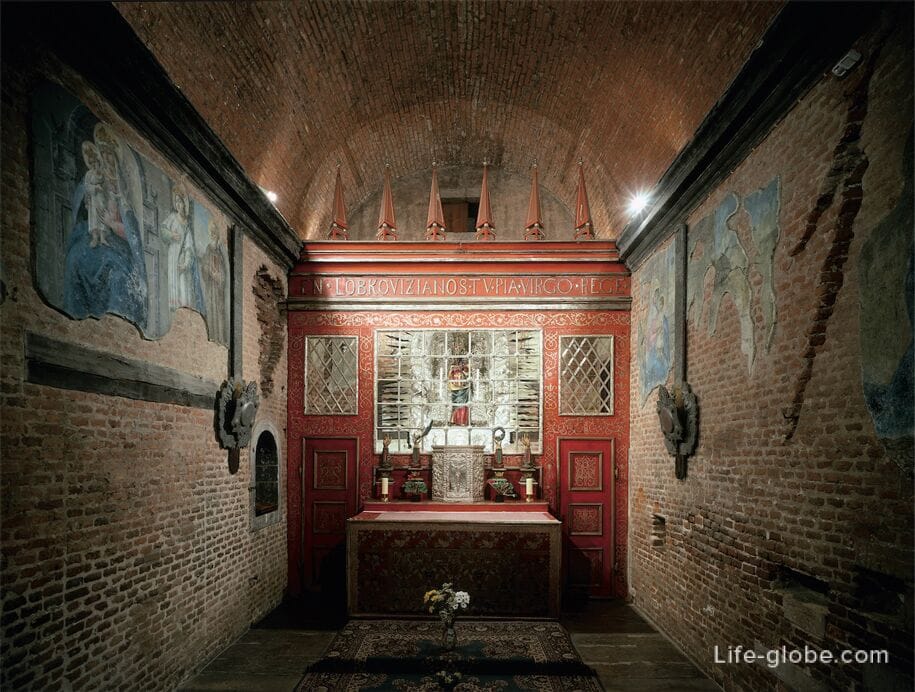 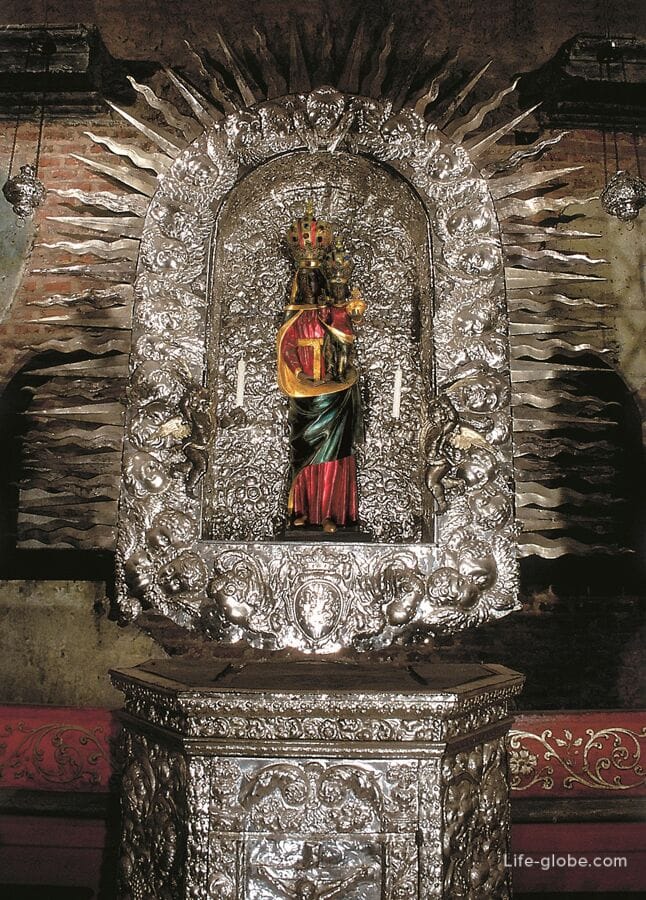 The holy hut is surrounded by a cloister, which was erected shortly after the construction of the Loreto Chapel to protect the arriving pilgrims from the weather and the sun. 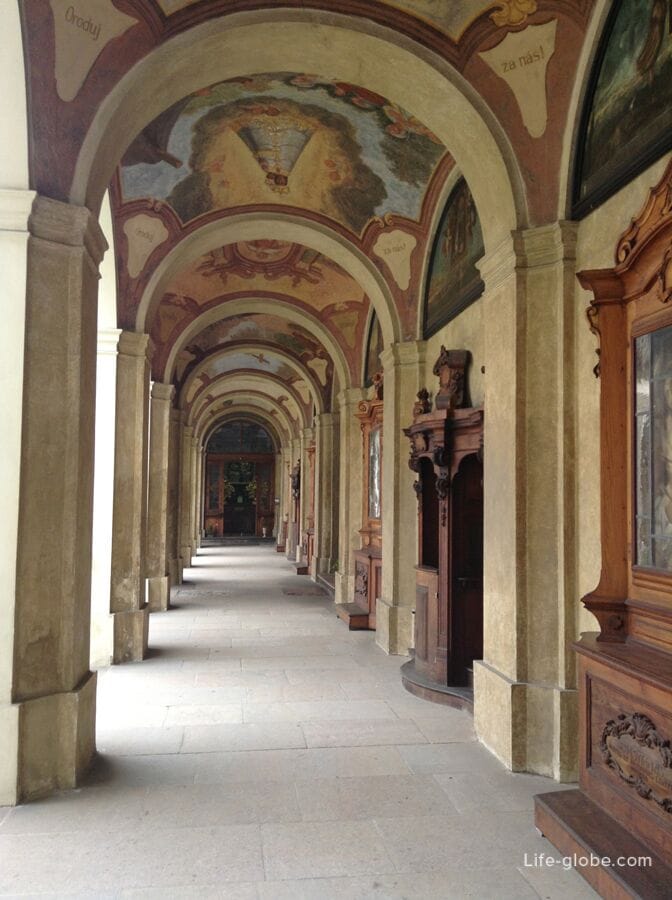 In the courtyard there are two sculptural fountains (the Resurrection of the Lord and the Assumption of the Blessed Virgin Mary), built in 1738-1740 in the workshop of J.M. Bruderle (documented 1725-1740 years).

Since both sculptural groups of fountains were made of Petrin sandstone of very poor quality, today there are copies in the courtyard (the originals can be seen in the Lapidarium The National Museum of Prague, where they were sent by the Capuchin brothers). 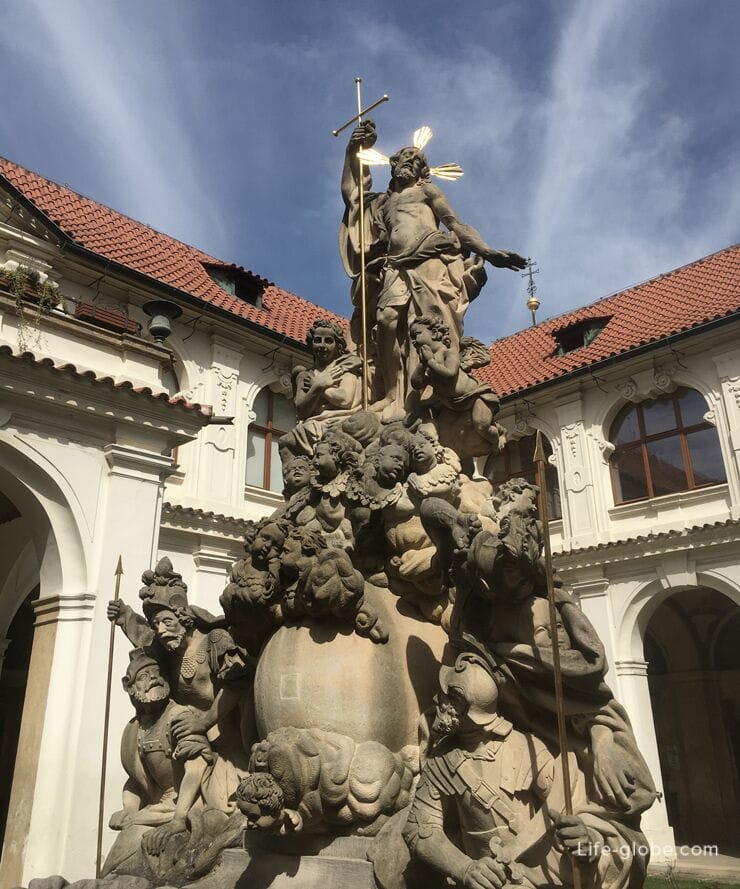 Four chapels are located at the corners of the courtyard and two on the north-south axis:

- Saint Annie's Chapel or Anne's (kaple sv. Anny), built in 1687. The main altar from the end of the 17th century is decorated with a relief of St. Anne of Samotrzeti (a gift from Katerina Poliksena from Lobkowicz). Side altar of St. The laurel was erected in 1709;

- chapel of St. Francis Serafimovsky (kaple St. Františka serafínského), built in 1717 by Eleonora Karolina, Princess Lobkowitz, designed by K. Dinzenhofer. The carved main altar in the high Baroque style from the sculpture workshop of M.V. Yakel contains in the center the painting "Stigmatization of St. Francis" by Peter Brandl;

- chapel of the holy Family or St. Joseph (kaple sv. Rodiny, jindy též sv. Josefa), founded in 1691 at the expense of Lyudmila Eva Frantishka, Countess Kolovratova. The main altar with the image of Christ has a coat of arms. The side altar of the Capuchin Saint Felix of Cantalis is made in Rococo style and decorated with high-quality sculptural decoration by Richard Prahner;

- chapel of the Holy Crisis (kaple sv. Kříže), built in 1691 by Lyudmila Eva Františka Countess Kolovratova. The main altar of 1692 with the image of Purgatory is complemented by a sculpture of the Crucified Christ. The chapel of the Capuchin martyr St. Fidel of Sigmaringen dates from 1735, as does the sculpture of St. Destroy. The statue of the scourged Christ dates back to the 17th century and was originally intended for the chapel of Our Lady of Sorrows;

- chapel of St. Antoninus of Padua (kaple sv. Antonina paduánského), built almost simultaneously with the twin chapel (St. Francis), with which the interior is combined: on the main altar (also from Jakel's workshop) there is a painting of St. Antonin by Sebastian Seiler in 1713;

- and, the most famous chapel is the Chapel of Our Lady of Sorrows (kaple Panny Marie Bolestné), which has the oldest sculptural group on the main altar - a Gothic pieta of the first half of the 15th century. This is the oldest corner chapel of the monastery was built in 1686 at the expense of Councilor F. Windisch for the Gothic sculpture "Pieta", presented to Loreta by the citizen V. Rincolini a year earlier. The alleged martyr St. Major (Vilgefortis, Kymmernis), whose cult was alive, especially in the Scandinavian countries. 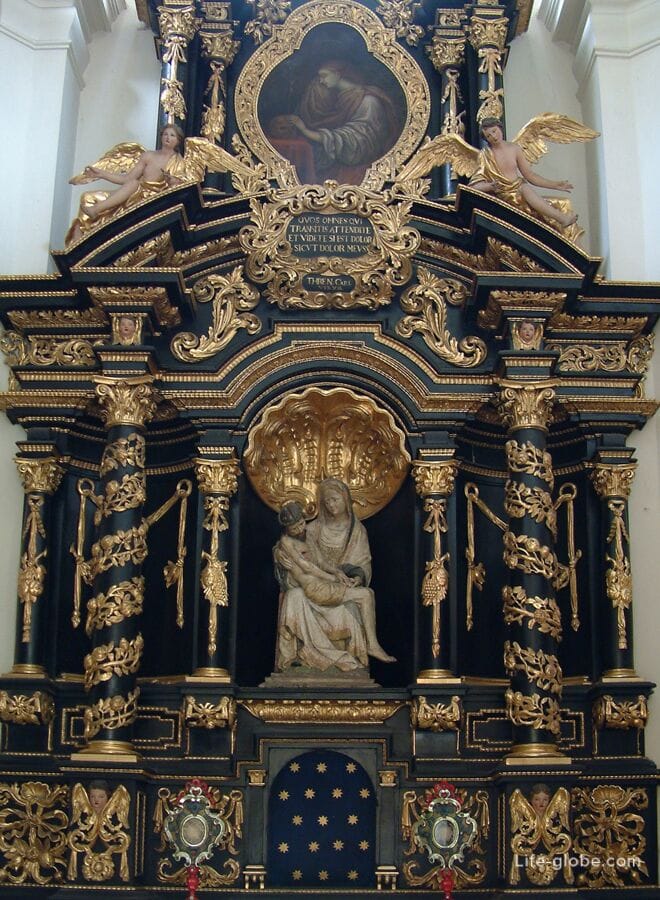 Another pride of the complex is the so-called Loreto treasure - a collection of religious objects and other votive gifts of the 16th-19th centuries (bowls, altars, miniatures, etc.), the most famous of which is a diamond monstrance called "Prague Sun", decorated with 6,222 diamonds.

The second richest treasure is a ring decorated with the jewels of the Virgin Mary of Lorraine (almost 500 diamonds, two hundred rubies, emeralds, pearls, etc.) and thirteen octagonal cameos with portraits of the Habsburg rulers.

The oldest item is a Gothic silver gilded bowl from 1510, donated in 1654 by Krysztof Ferdinand Popel from Lobkowitz.

One of the most valuable exhibits is a home altar made of ebony with a silver figured group "Christmas".

The treasury is located in the front wing of the Loreta complex.

Another structure of the Prague Loreta complex is the Church of the Nativity of Christ (kostel Narození Páně).

In the eastern part of the monastery there was a so-called Large Chapel, which was expanded several times over the centuries until it reached the form of today's Church of the Nativity of Christ.

The church is a Baroque building with a Rococo interior.

On the altar of the church there is an image of the same name, presented by Countess Maria Marketa Waldstein, nee Chernova from Khudenice. The sculptural decoration was carried out by Matthias Schoenherr (the main altar, pulpit, oratory, four statues on the sides of the church and two side altars) and Michal Jan Bruderle (four pairs of angels on the side altars).

On the vault of the church there are frescoes: "The Nativity and the Adoration of the Magi" by Jan Adam Schepf and "The Sacrifice of the Lord" by Vaclav Wawrzyniec Rainer in 1738.

The original organ of master L. Spiegel, acquired by Eleonora Caroline, Countess Lobkowitz in 1718, was replaced in 1734-1738 by a new Baroque organ of masters F. Katzer and K. Weltzer from Kralik. 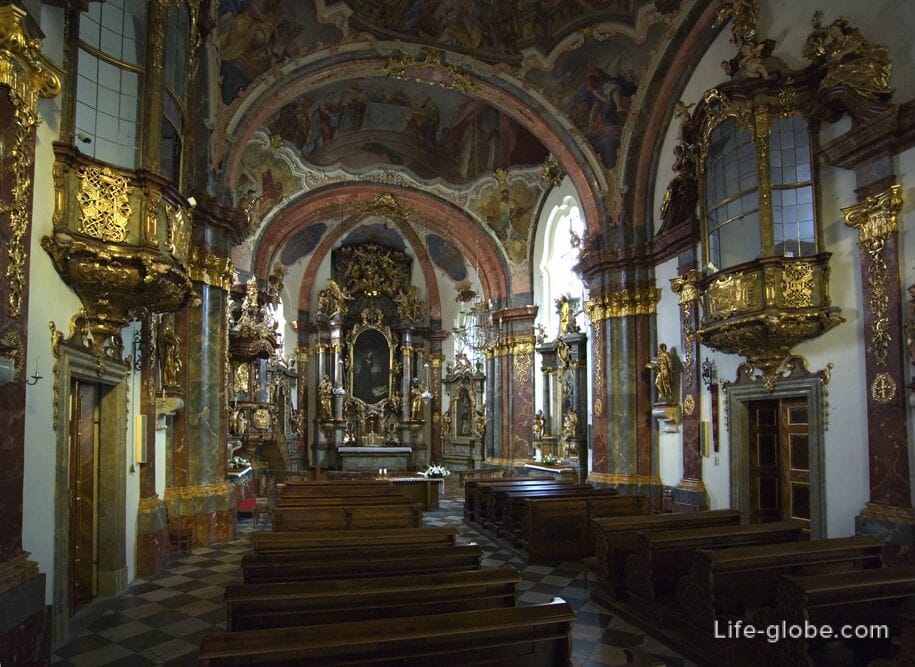 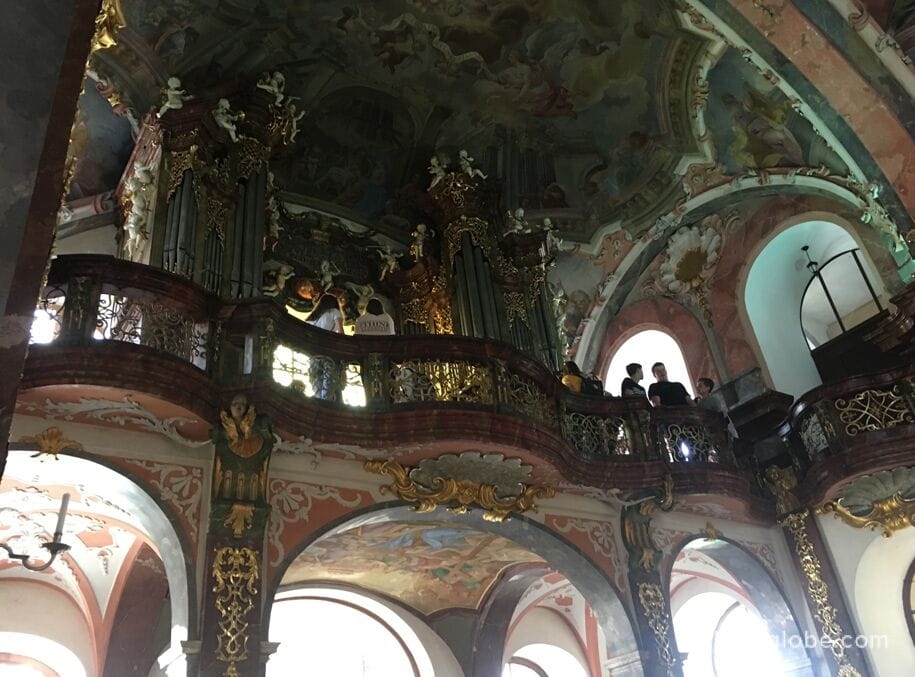 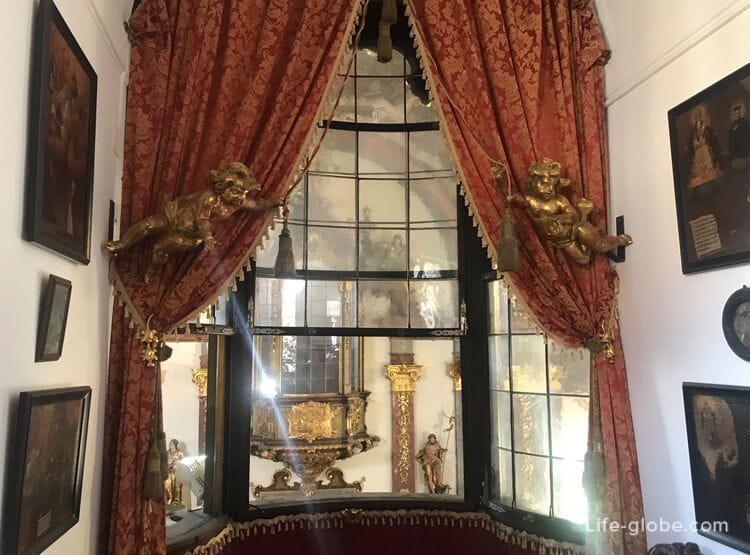 Loreta is connected to the current Capuchin monastery (kapucínského konventu) with a monastery garden from which view of Prague.

There is a church of Our Lady of angels (Virgin Mary of angels) with a modern organ. 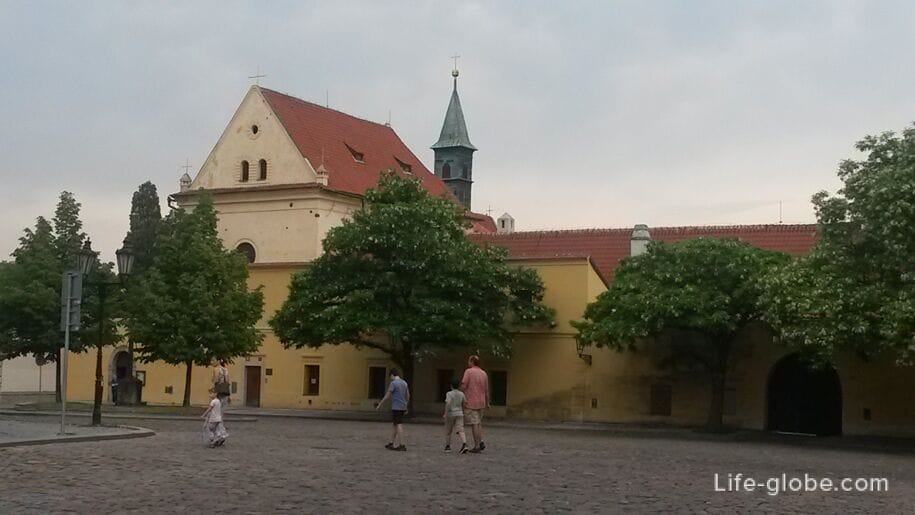 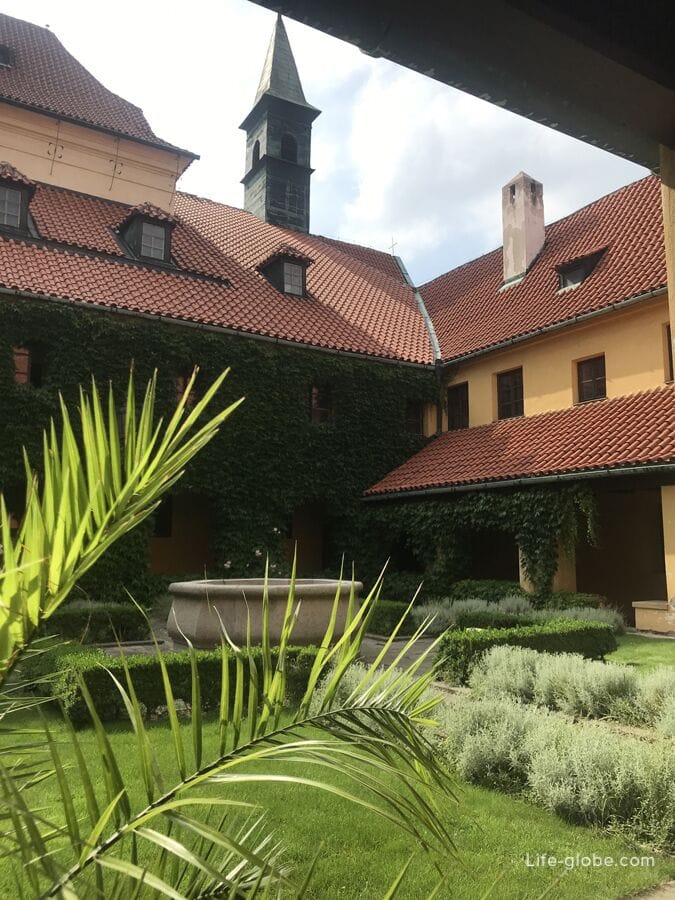 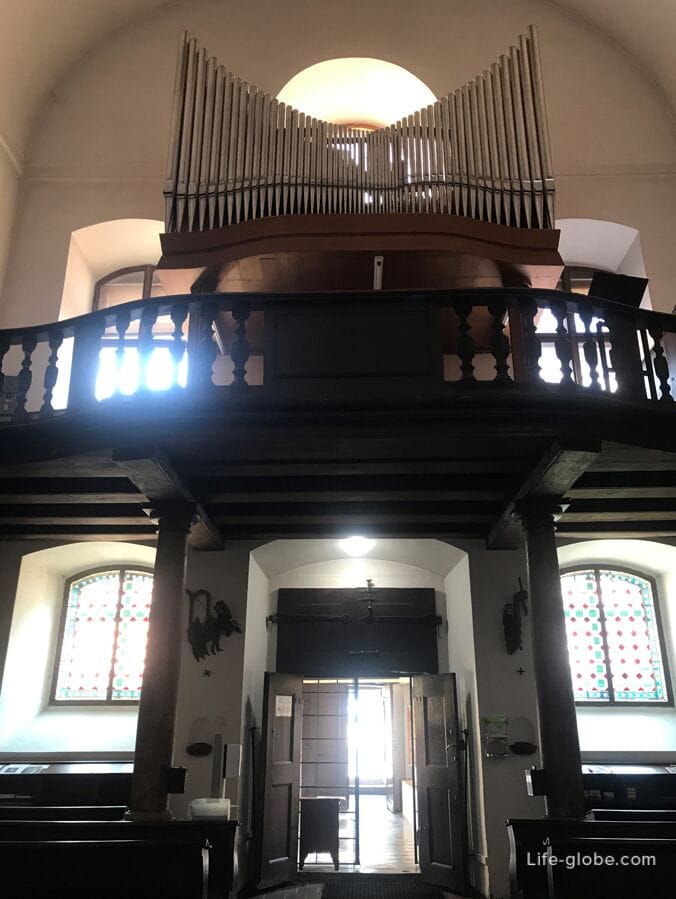 Entrance to the Prague Loreta is paid. You can rent an audio guide.

Various types of excursions are conducted around Loreta and the neighboring monastery.

Concerts and temporary exhibitions are held in Loret.

There is a museum shop at the Loret; there are restrooms.

Ticket prices, guided tours, the time and music of the bells (carillon), as well as the conditions of visiting and the place of sale of tickets, we recommend that you check immediately before visiting on the official website of the Prague Loreta: loreta.cz.

You can get to Loreta on foot from the historical center of Prague; by tram No. 22 to the Pohořelec stop (then 5 - 400 meters on foot); by metro along the green line A to the Malostranská station, and then on foot via Prague Castle and Hradcanska Square. 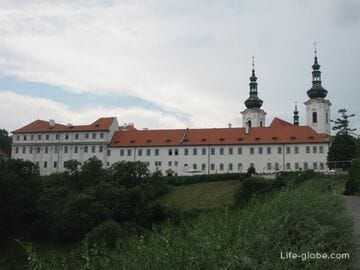 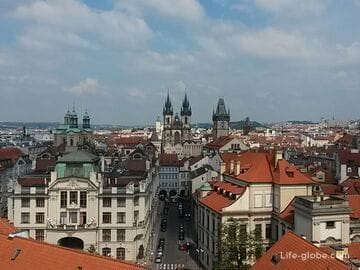 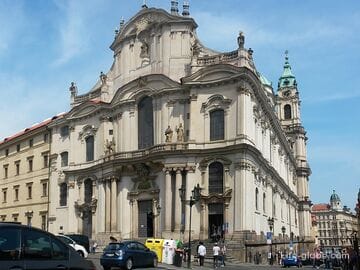