Ambras Castle (German name: Schloss Ambras Innsbruck) is one of Innsbruck's most important and popular attractions, as well as one of the most important museum complexes in Austria.

The cultural and historical significance of the castle is inseparably connected with the personality of Archduke Ferdinand II (1529-1595 years), who promoted art and science as a true Prince of the Renaissance. He was the father thorough the collections of the present castle Ambras, which originally was built as a Museum and hotel building, located on the grounds of the castle Ambras.

The first mention of the castle dates back to the 10th century. The castle acquired national importance in the middle ages as the permanent seat of the counts of family Andec.

From the original fortress Ambras is nothing left, it was destroyed in 1133, the year. Hotel medieval castle can only be seen in the structure of the present Upper castle.

Land at the former castle in 1563 acquired by Ferdinand II, who turned the former fortress into a castle in the Renaissance style, hiring for the restructuring of the Italian architects. Upper castle became the residence of Ferdinand and his family (1567 1595 years).

Slightly below the Upper castle was built another building, the so - called "Large hall" of the late Renaissance (1569-1572) was that the 19th century was known as the "Spanish hall" (Spanischer Saal) and is one of the most artistically significant buildings - the example of German Renaissance architecture.

Spanish hall exists today. The layout of the hall with a length of 43 meters there are 27 full-length portraits of the princely rulers of the Tyrol - from Albrecht I of Tyrol, counts Hertz Tirol, and Margaret Mowles to the Habsburg dynasty and ends with Ferdinand II. In this room today are the classical concerts. 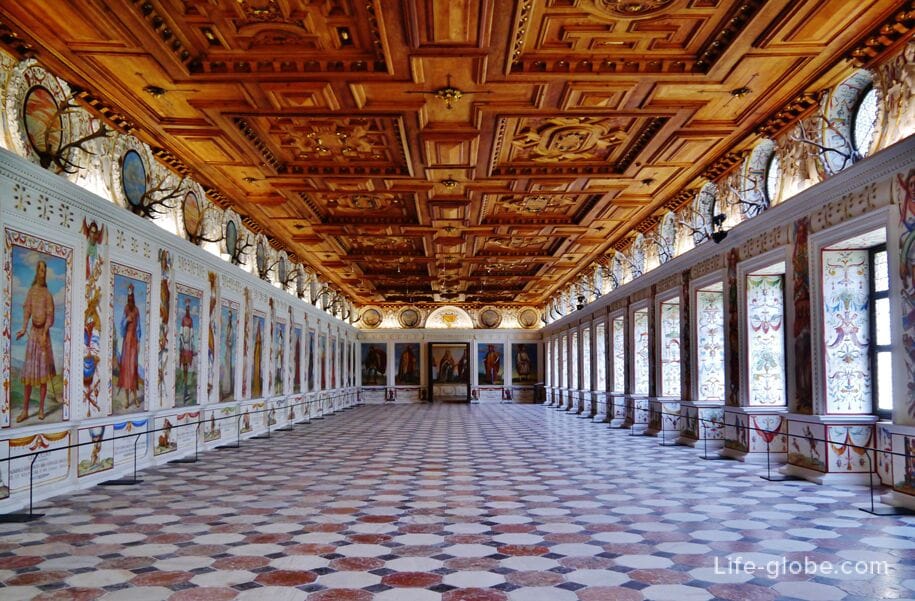 Lower castle Ambras was built as a Museum to store the collection of Ferdinand II, consisting of: armor, weapons, portraits and natural objects, curiosities "natural wonders", the latest scientific instruments of the time, musical instruments and treasures.

In 1589 Ferdinand instructed to build another building Weapons of Heroes, to accommodate their growing collection of armor the "Heroes" of that time.

In 1595, the castle passed to the second son of Ferdinand II, Margrave Karl von Burgaus, who have no interest in the castle, nor his collections and sold the residence 1606 to Emperor Rudolf II. Subsequently, the castle ceased to be the residence, rarely visited, the collection also dilapidated, some of the exhibits were lost.

In the 17th century Emperor Leopold I brought in a vein of the most precious pieces from the collection of books, manuscripts and early printed works, under the threat of disappearance in the castle of Ambras.

In 1855 the castle was transformed into a summer residence of Archduke Karl Ludwig (Governor of Tyrol), which was amended in the castle and the adjacent Park.

In 1861, after the resignation of Carl Ludwig as Governor, the castle remained in a more or less usable condition. Only in 1880 the castle was converted back into a Museum and subsequently renovated, with the result that the old house for ball games and a warehouse of weapons of the heroes were demolished.

The final revival of the castle Museum began in 1919, when it became the property of the Austrian Republic, and in the 1970s began its global restoration, and in 1981, the year the castle opened its doors to visitors.

The castle is the main venue for the annual Innsbruck festival of early music.

The upper castle of Ambras 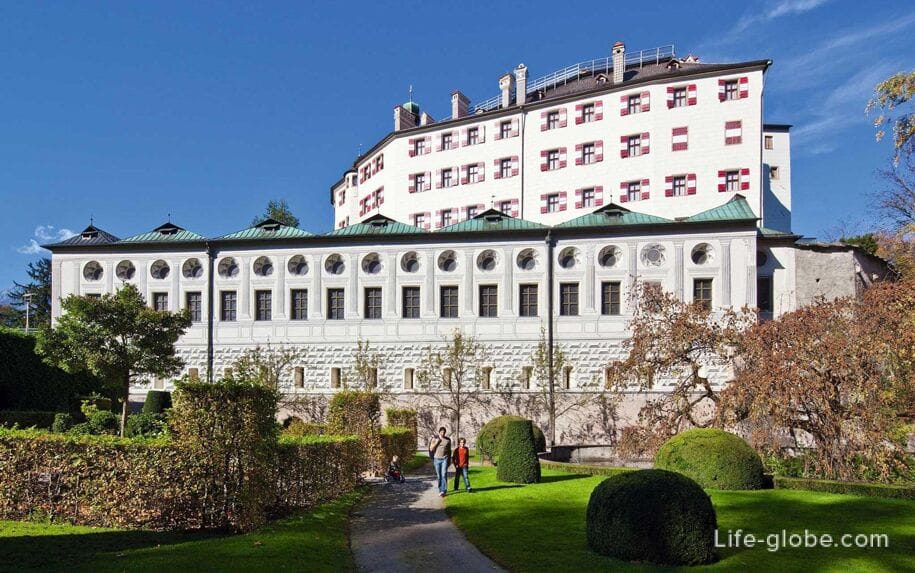 The courtyard (patio, Innenhof) in the Upper castle with a Grisaille painted walls, executed in the fresco technique, which are among the largest and best preserved examples of fresco painting from the 16th century.

Themes of the scenes of the frescoes are typical of the time, with images of princely virtues and muses, heroes, male and female, which should serve as an example of the princely state. 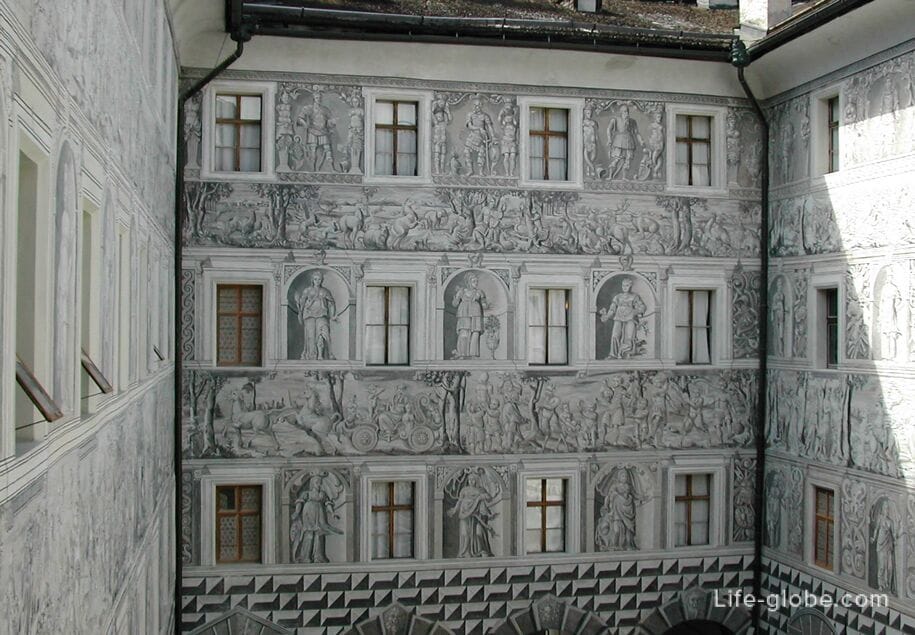 St. Nicholas chapel (St. Nikolauskapelle), whose history dates back to the 14th century, and current look - to the 19th century when the Governor of Tyrol, Archduke Karl Ludwig ordered a total redesign August Werndly, is one of the gems of the castle. 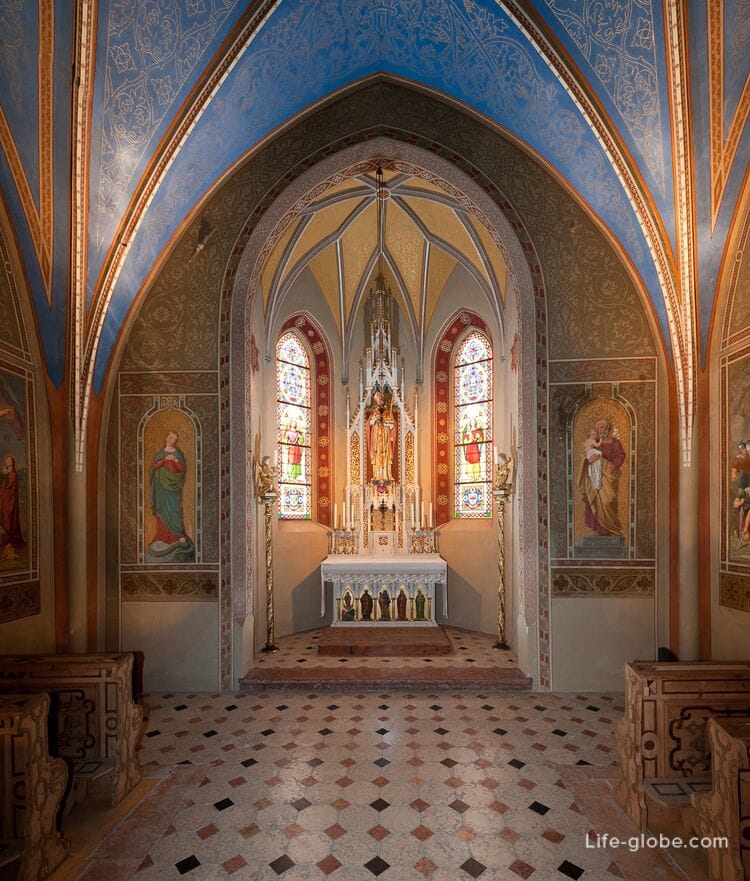 The bath should not be viewed in isolation, but as a single unit with a steam room and a room for heating and also a lounge. This is the only fully-preserved bathing complex of the 16th century.

The very same tub that can be accessed through the recreation room, encased in floor to a depth of 1.6 meters in front of the window and covered with tin-coated copper. Stone stool with a wooden seat in the centre of bath, preserved to our days, may have belonged to the original owner of the baths. Two steps that led to the bath and served as a seat - is not preserved.

For bathing earlier in the bottom were placed hot stones, which were added to heat the water. To enhance the healing effect of the bath, the water is sometimes added various herbs. 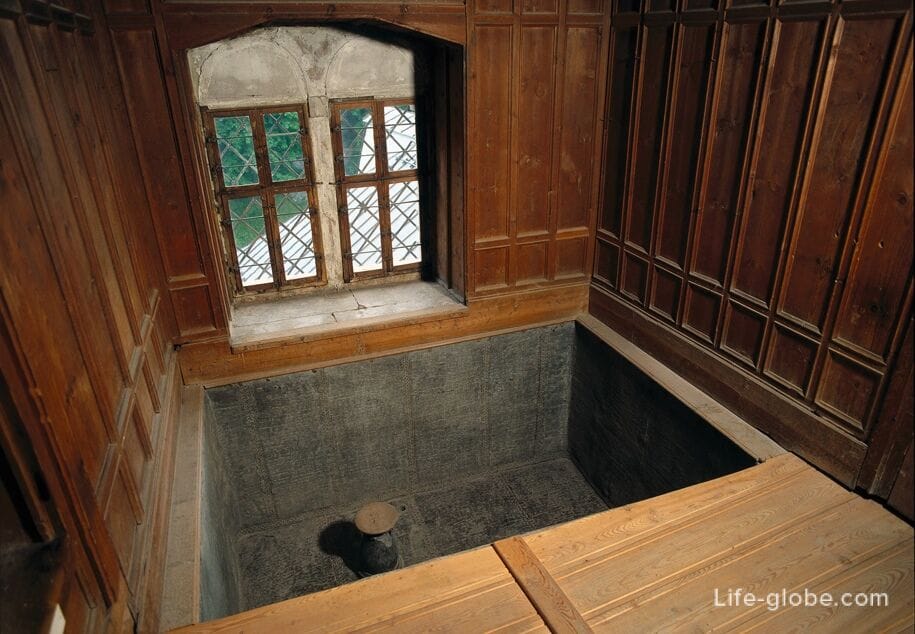 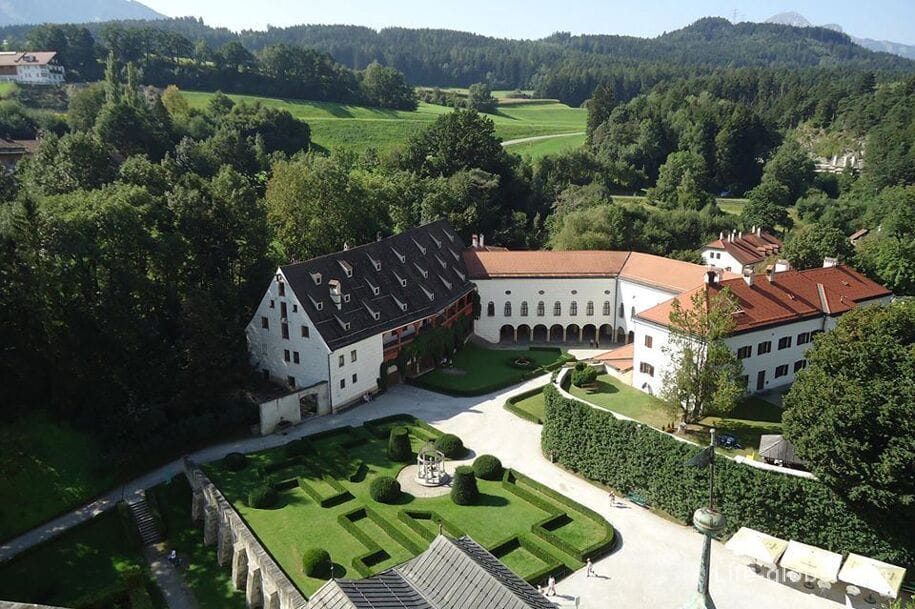 The Museum's collection of Ambras castle

In "Habsburg portrait gallery" (Die Habsburger Porträtgalerie), which originates from the collection of Ferdinand II, included portraits of famous people, played a special role in history due to their achievements or origin picture of the period from the 14th to the 18th century.

The gallery is located on the Top three floors of the castle.

Collection of Gothic sculptures (Skulpturen Sammlung Gotischer) originates from the time of the reign of Emperor Maximilian I, grandfather of Archduke Ferdinand II.

The most valuable specimens in the collection is the impressive altar of George, which was made by Sebalda Boxdorfer for Maximilian I between 1510 and 1515 years. 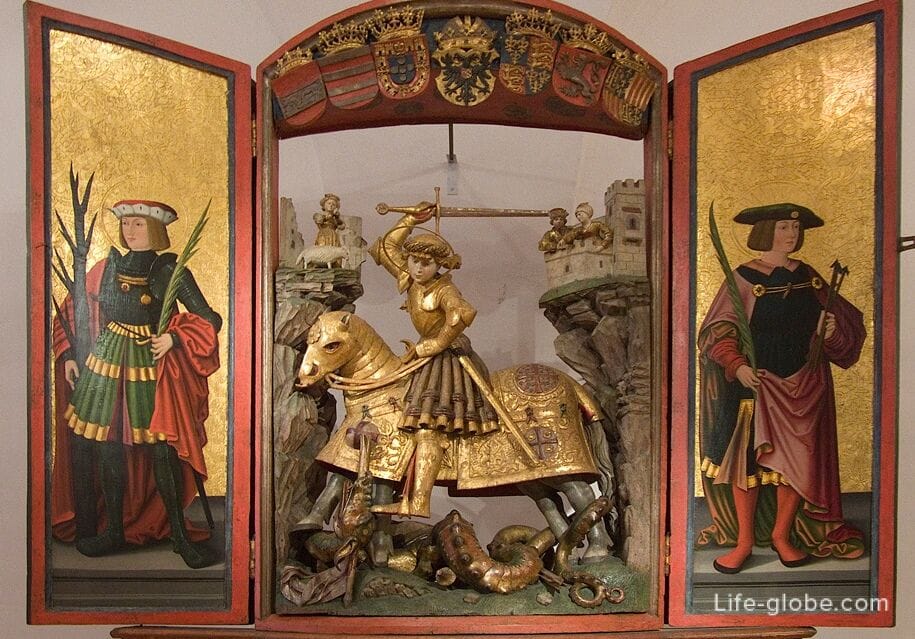 The Strasser glass collection (Die Glassammlung Strasser), which is one of the world's most important collections of Renaissance and Baroque glass.

The collection was created by Professor Rudolf Strässer (1919-2014) and includes a precious glass of the most important European areas of glass production, such as Venice, Innsbruck, Germany, Bohemia, Silesia and the Netherlands.

Collection "Chamber of art and curiosities" (Die Kunst - und Wunderkammer), which was founded by Ferdinand II in the 16th century it was considered one of the most important of its kind. This is the only collection that is still in the premises of the Renaissance, built for the collection.

The chamber of arts and curiosities also contains one of the largest collections of "Exotic", i.e., items from outside of Europe at the time. 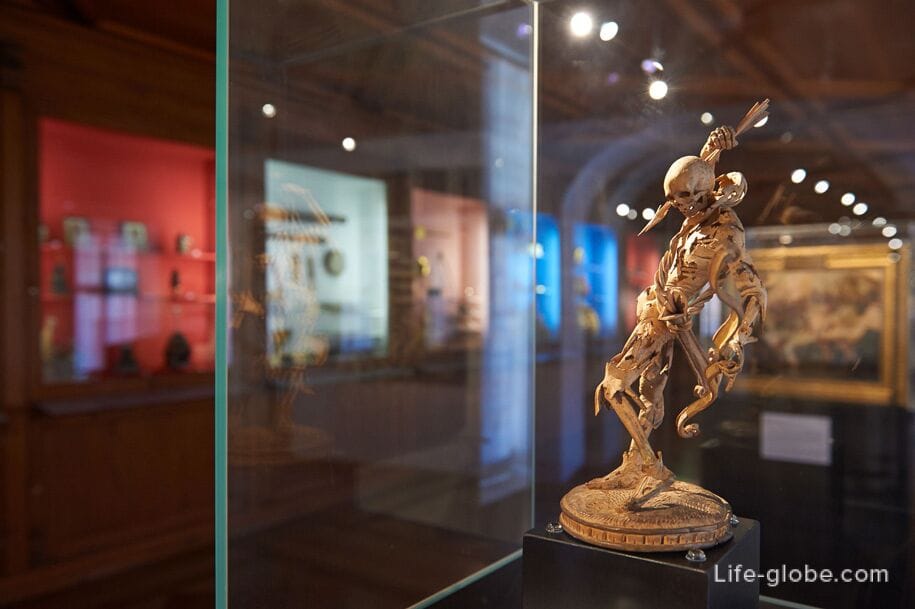 Armory (Die Rüstkammern), which contains historical military items such as armor, including armor for the horse riding, horse armor, Ottoman equipment and items of rarity such as saddles, bows and arrows, swords, shields and helmets that were diplomatic gifts or items obtained directly from the field of battle. Also in the Arsenal you can see the armor and weapons of the Thirty years war (1618-1648), etc. 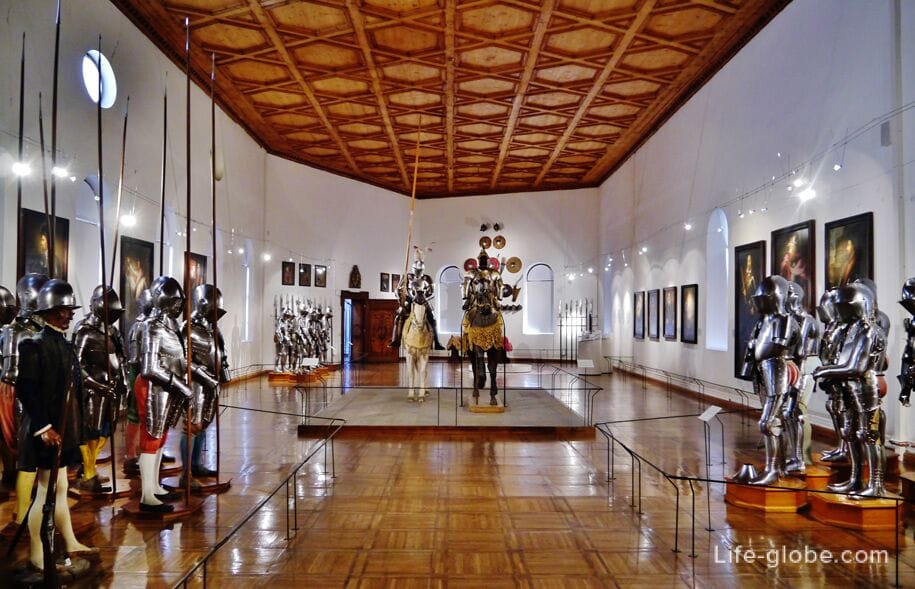 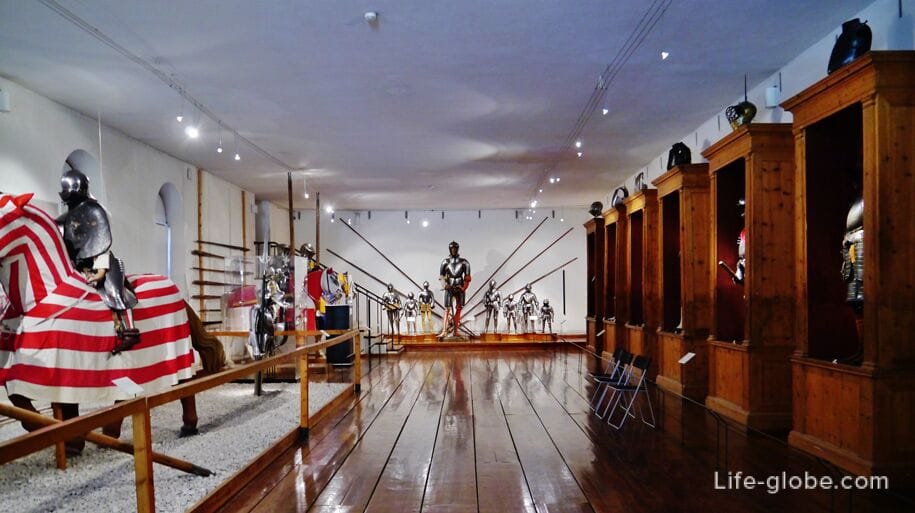 Around the buildings of the castle is a landscape Park with a pond, a rotunda and Seating (Schlosspark Ambras).

Park with an area of 20 hectares, was once a green oasis of Archduke Ferdinand II and his wife the Philippines, 'zer. They designed the Renaissance garden in the second half of the 16th century. Then the highlight of the garden was an artificial waterfall.

The earliest known written descriptions of the Park are to 1574 and describes fish ponds, vineyards, aviaries and garden houses in the Park. And, as a curiosity at that time in the area, "the Rotunda" in the midst of which stood a round table, which, thanks to the water actuator is rotated in a circle. 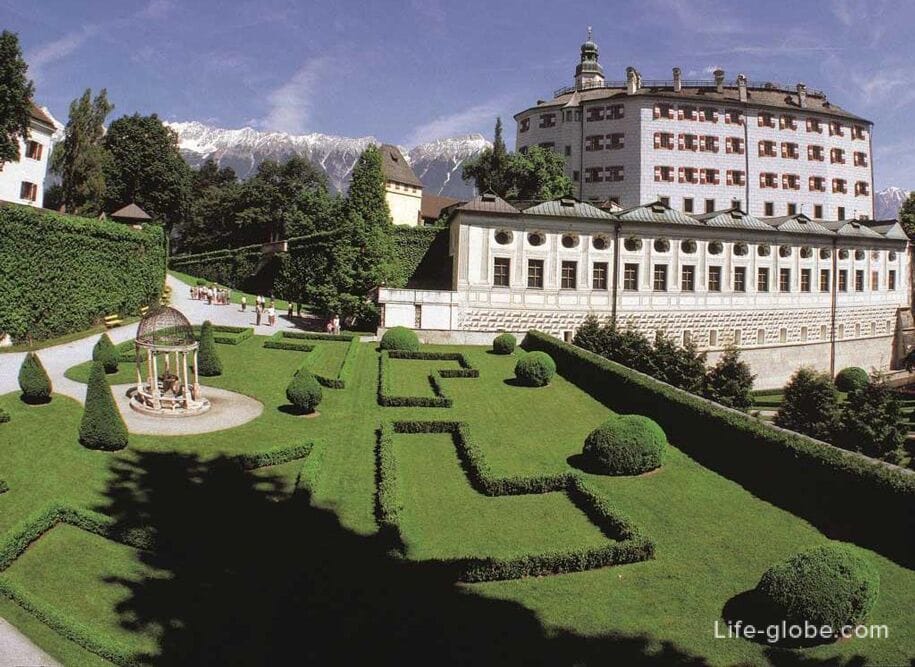 Site the Ambras castle: schlossambras-innsbruck. On the website you can check opening times of the castle and private collections, admission prices, and other useful information.

Location Ambras castle: the castle is located on a hill at the altitude of 587 meters above sea level in the South-Eastern outskirts of Innsbruck, address: Schloßstraße 20. 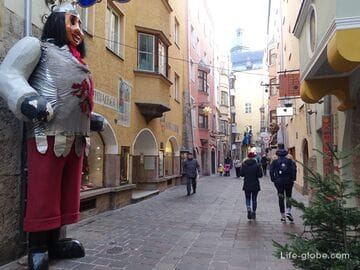 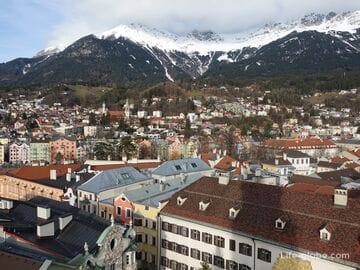 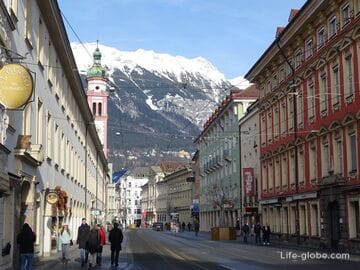