Rudolfinum is the residence of the Czech Philharmonic Orchestra and the most prestigious Czech concert hall, located in a beautiful Neo-Renaissance building in Prague.

The Rudolfinum hosts concerts and exhibitions, there is also a gallery, there is a panoramic terrace and a cafe. 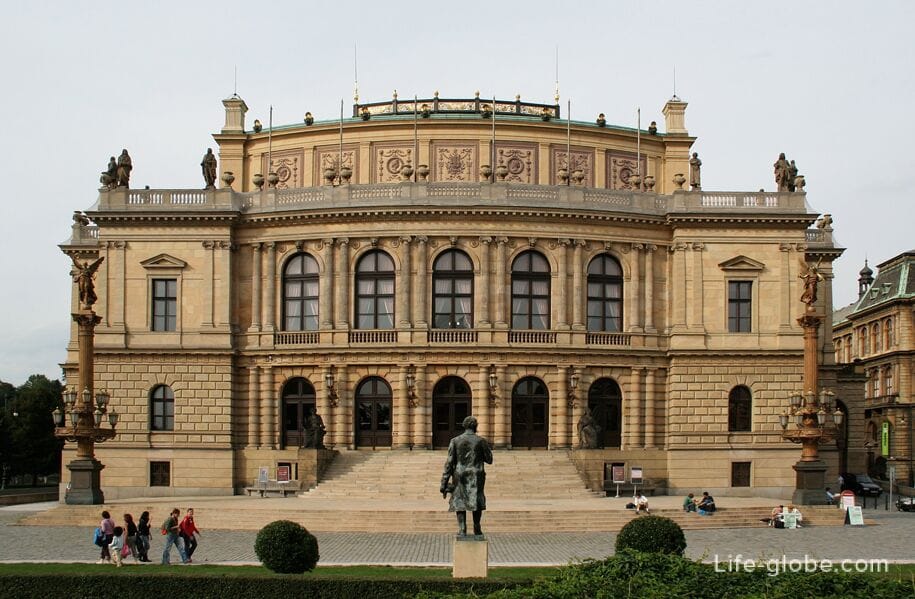 The Neo-Renaissance building was built in 1876-1884. It was the work of architects Josef Zitek and Josef Schultz.

The grand opening took place on February 7, 1885. The name "Rudolfinum" is in honor of the Crown Prince of the Austro-Hungarian Empire Rudolf.

Originally it housed an art gallery, museum collections and a concert hall; in 1918-1938 and 1945-1946, the building served the National Assembly.

In January 1896, the Czech Philharmonic started its activity in Rudolfinum, which at its first concert under the baton of Antonin Dvorak played the symphony Slavic Rhapsody and the New World. In honor of this event, the most famous concert hall of Rudolfinum was named "Dvorak Hall".

In 1990-1992, the Rudolfinum was restored according to the project of Karel Prager for its original musical and artistic purpose and in its original form.

Today, the Rudolfinum is one of the most important buildings of Czech Neo-Renaissance architecture. The balustrade of the terrace is decorated with statues of famous musicians: George Frideric Handel, Ludwig van Beethoven, Wolfgang Amadeus Mozart, Johann Sebastian Bach and others.

The building is also decorated with seated muses on the sides of the stairs from Jan Palach Square and statues of pairs of lions and sphinxes at the covered underpass in the east and at the entrance to the exhibition hall. A bee is depicted on the chest of stone sphinxes at the entrance from the embankment as a symbol of the thrift of the Czech Sporzhitel, which financed the construction of the Rudolfinum. 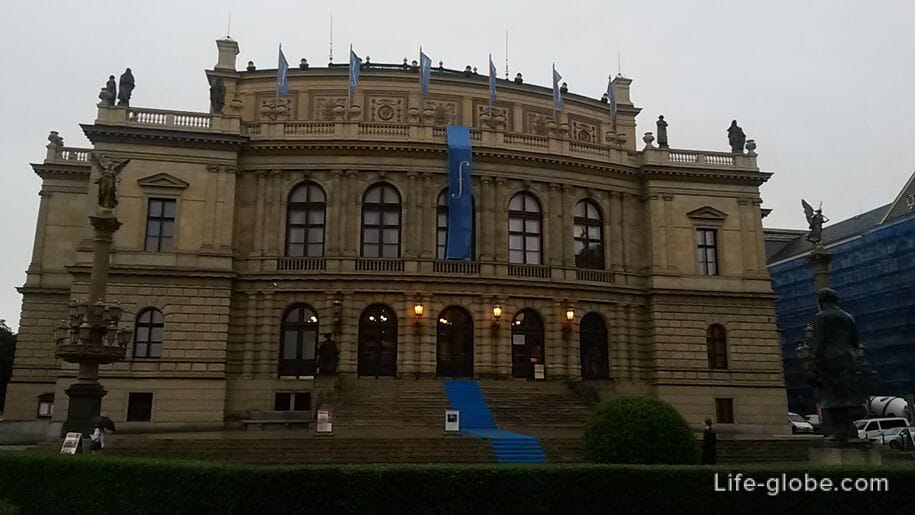 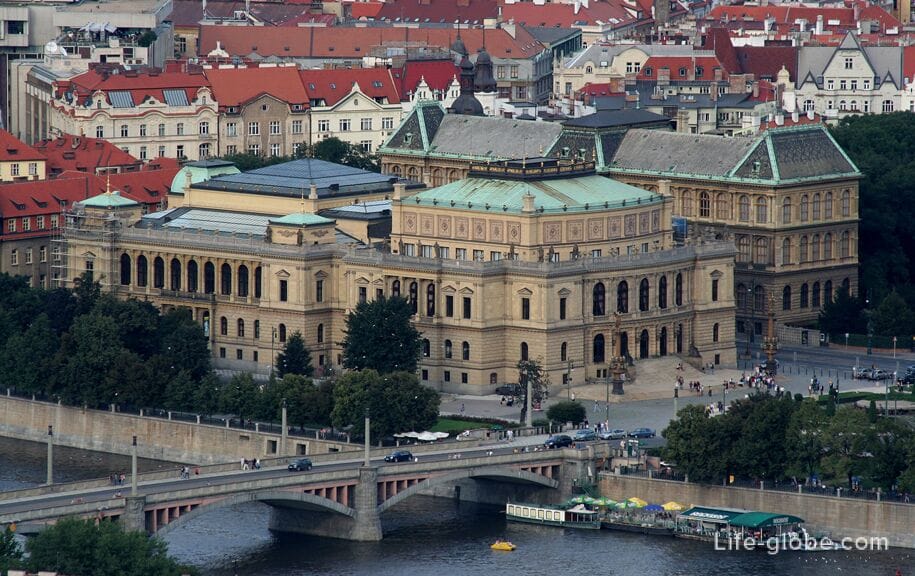 Concert halls and premises of the Rudolfinum

The main hall of the Rudolfinum is the Dvorak Hall (Dvořákova síñ), where classical music concerts are held.

In the hall there is a symbol of a bee, where a golden bee in a blue field is carried by angels.

Dvorak Hall is designed for 1104 seats and is famous for world-class acoustics.

The hall is also decorated with a beautiful organ, created for the Rudolfinum in 1884 by the German organist Sauer from Frankfurt and decorated by the sculptor Muller from Munich. 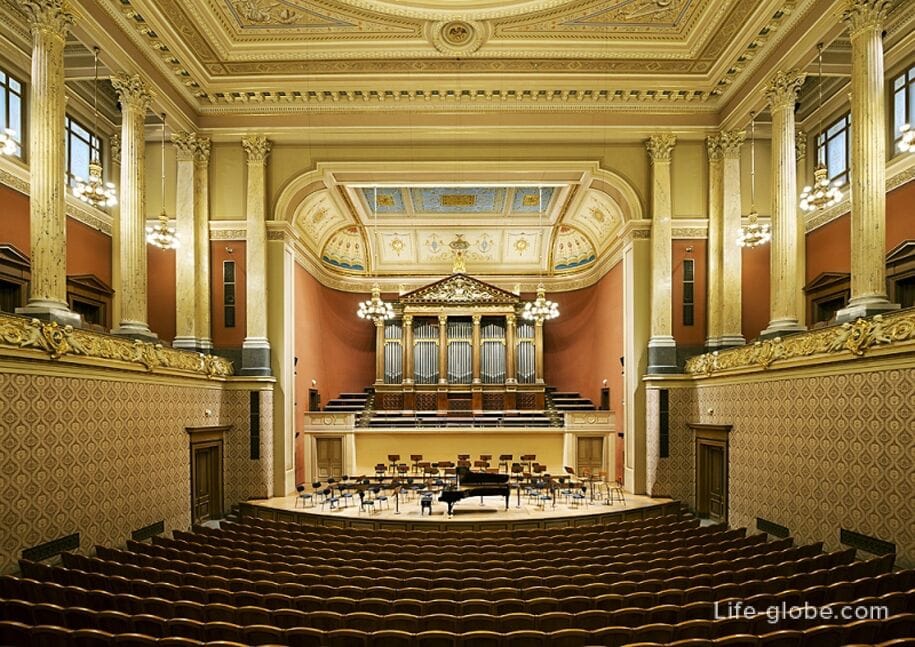 Next to the Dvořák Hall is the former Small Hall, now the Suk Hall (Sukova síň) for 220 seats, which served chamber music for more than a hundred years and where the composer and performer Josef Suk, a student of Dvořák, also had his creative beginnings.< /p>

The composer's grandson, violinist Josef Suk, unveiled a bust of composer Josef Suk by Otakar Spaniel in the hall. In 1994, a memorial hall was opened here with an exhibition of virtuoso violinist Jan Kubelik.

The original fountain, which stood in the Great Hall, has been moved to the cash register area today. It consists of parts obtained from the Cast Iron Museum in Komarov. 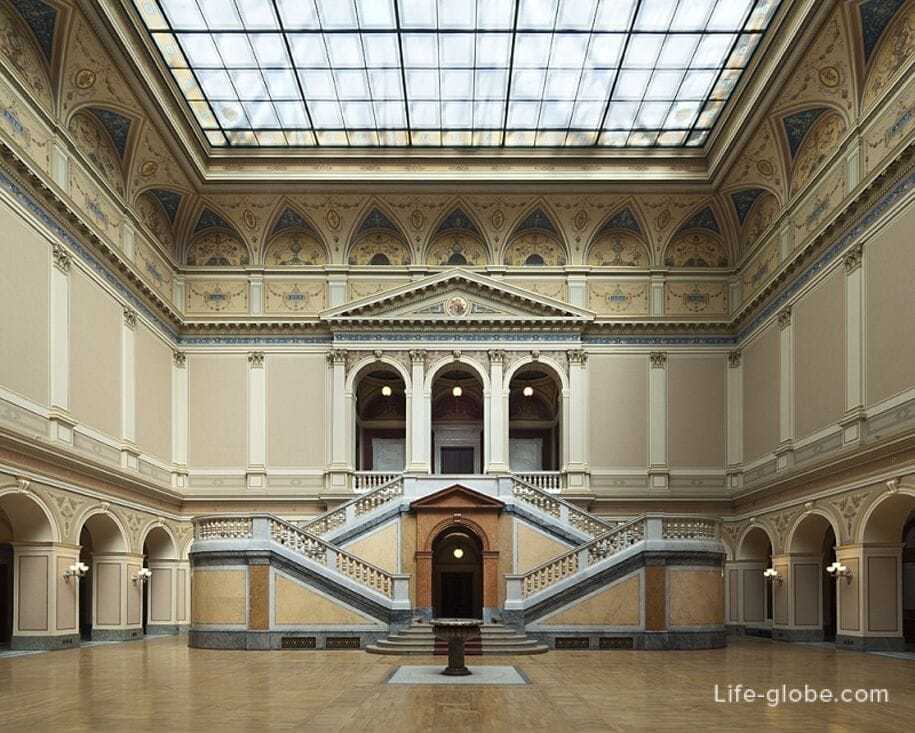 Concerts and events in the halls of the Rudolfinum

Every year Rudolfinum becomes the center of the prestigious international festival "Prague Spring".

In addition, exhibitions are organized within the walls of the Rudolfinum throughout the year. 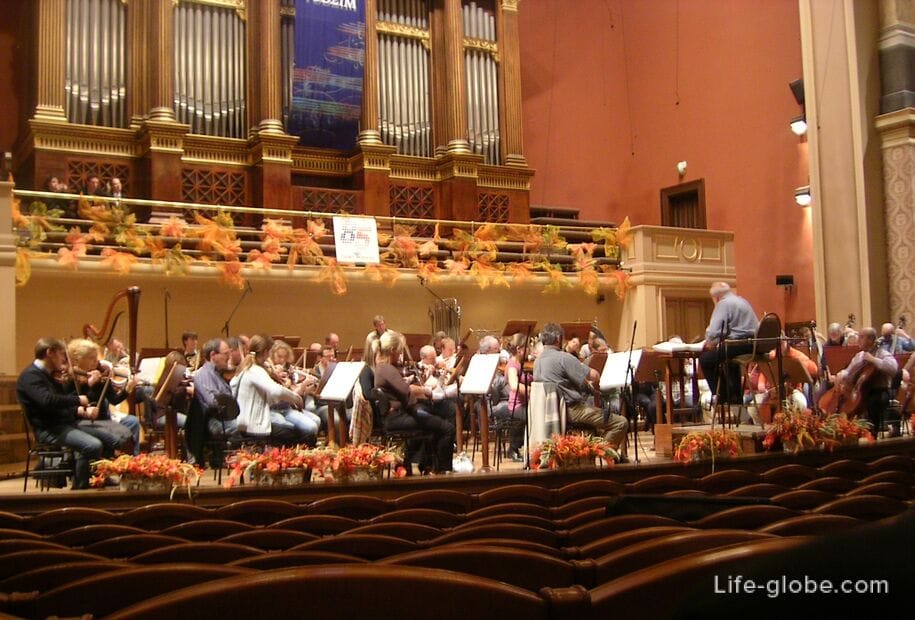 Terrace and excursions in Rudolfinum

The outdoor roof terrace of the Rudolfinum also attracts attention, with beautiful views of the Vltava River and part of the city of Prague.

There are also guided tours of the Rudolfinum with visits to Dvorak and Suk halls, executive halls and roof terraces. 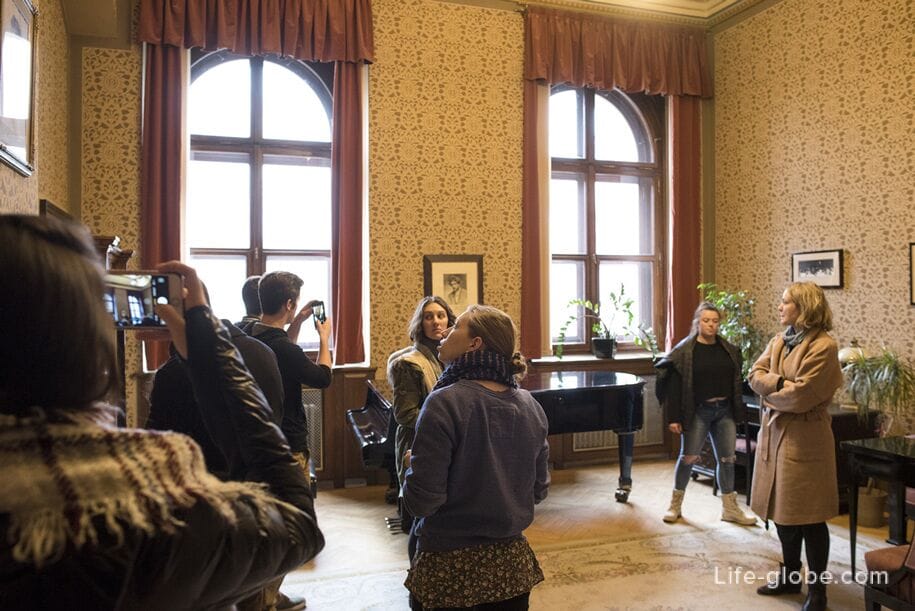 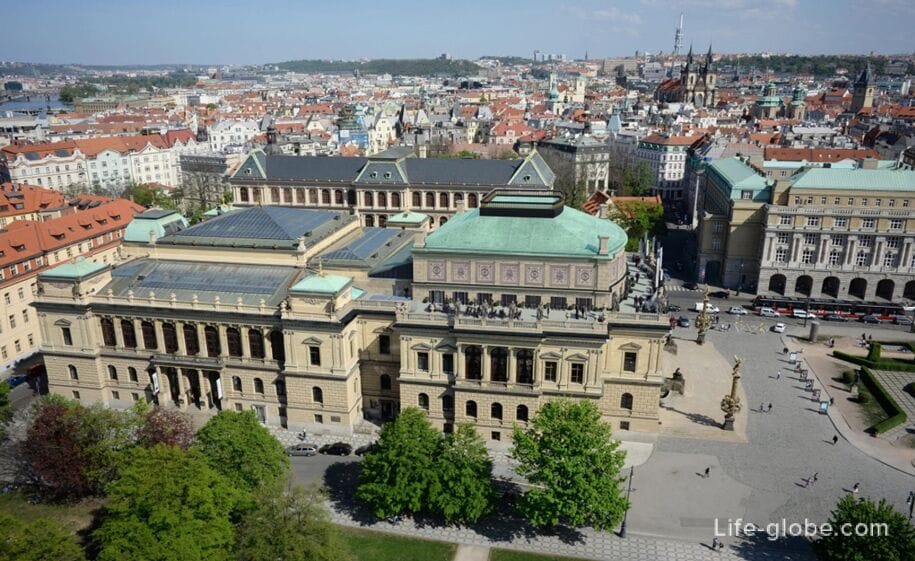 The Rudolfinum Gallery is one of the most important galleries in Prague.

The gallery does not have its own collections, various temporary exhibitions are held within its walls, which mainly represent modern fine art, and sometimes views into the past.

The beautifully decorated exhibition halls of the grand gallery are complemented by three halls of the small gallery, especially suitable for chamber exhibitions and other projects. 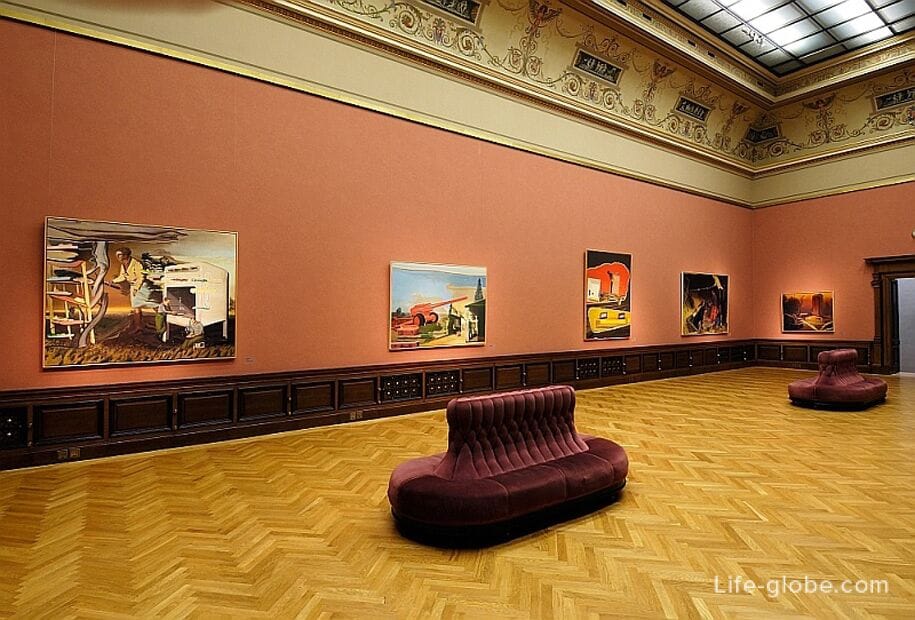 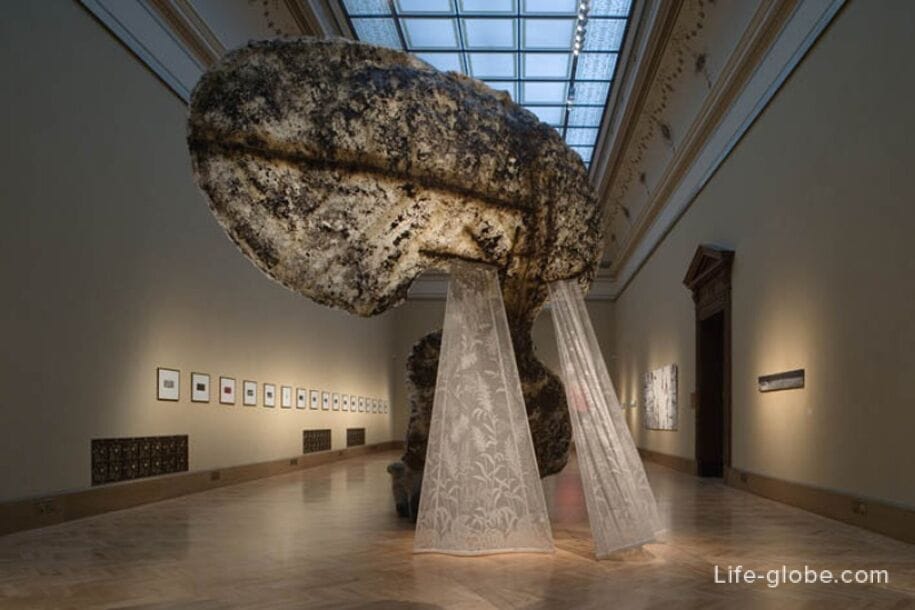 Cafe Rudolfinum is located in the former Great Hall with Corinthian columns, which originally served for exhibitions of fine art, and then was used as an archive.

Today it is a stylish and elegant cafe.

The cafe is also used for receptions.

The entire Rudolfinum building is barrier-free. 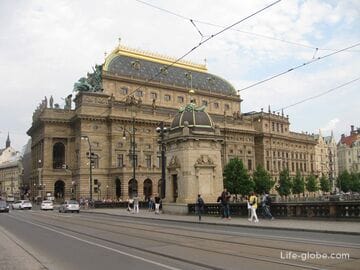 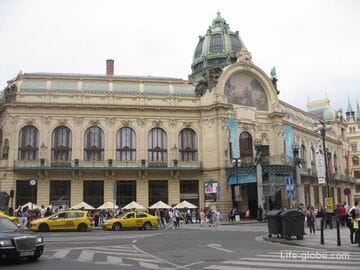 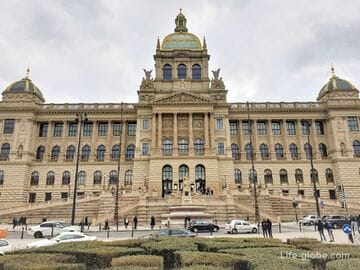