Svetlogorsk is the largest and most developed resort city on the Baltic Sea coast of the Kaliningrad region.

In addition to the sea and the beach, which runs along the long promenade, as well as the mild climate and the pine-sea air in Svetlogorsk presents the sights, a separate group from which you can select museums and exhibitions, as most of Svetlogorsk, and the village is Gratifying part of the Svetlogorsk city settlement is located 2 kilometers from the center of Svetlogorsk.

Museums and exhibitions in the center of Svetlogorsk

- the ethnographic exposition "People of the Sea", introducing visitors to the life and cult of the peoples living in Southeast Asia: on its mainland, on the islands between the Indian and Pacific Oceans, as well as on the Hindustan peninsula;

- Marine Art Gallery, which is a space of interchangeable creative projects.

Also on the territory of the center there is a cafe, a relaxation area, a library, a souvenir shop and the "Miklukho-Maklay hut", where interactive classes for children are held.

The Maritime Exhibition Center is located in the building of the Yantar-Hall Variety Theater, at the address: 11 Lenin Street, Svetlogorsk. 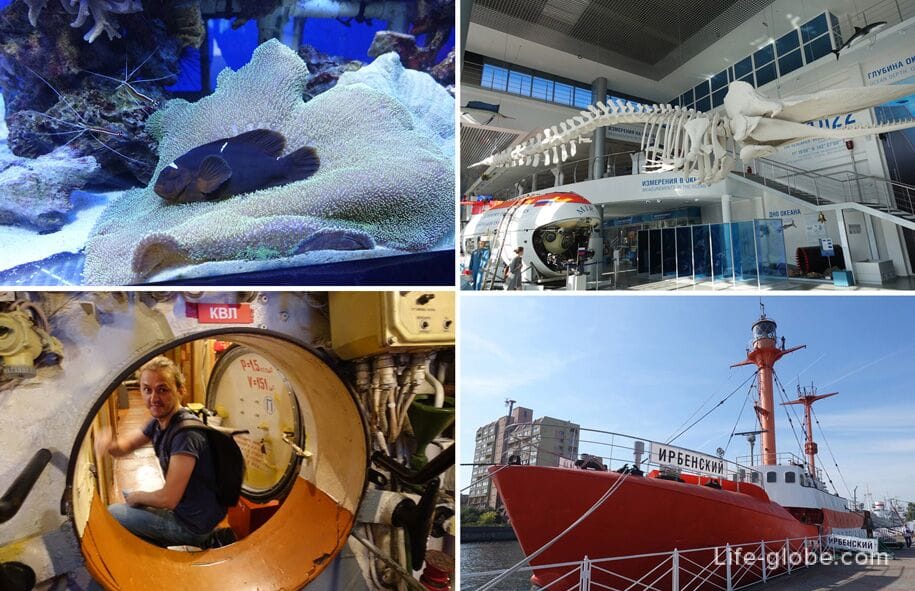 Museum of the city of Svetlogorsk

The Museum of the city of Svetlogorsk consists of two halls:

- exhibition hall, which is a space for art and photo exhibitions.

The halls are located in the tourist information center of Svetlogorsk, at the address: Karl Marx Street, 7A.

Entrance to the halls of the museum is free (free). Learn more about the museum of the city of Svetlogorsk and the tourist information center...

The museum "Wheel of History" presents the museum exposition "Raushen-Svetlogorsk", which tells about the past of Raushen and the present of Svetlogorsk.

The museum presents cultural and everyday objects, old photographs and other exhibits that tell about life, recreation, crafts and people who lived and worked in this place.

During a visit to the museum, you can watch a movie with a tour of Svetlogorsk.

The museum has a mini-shop "Vintage Shop", where you can buy souvenirs, postcards and various products.

The address of the museum: Svetlogorsk, Gorky Street, 4a.

The entrance fee to the museum is 150 rubles; a children's ticket is 100 rubles. Entrance to the merchant shop is free. Museum website: kolesoistorii

The exhibition is dedicated to the development of amber craft from the 17th century to the present day.

The exhibition presents: some equipment for catching amber, ancient and more modern machines for processing sunstone, costumes of amber hunters, as well as ancient amulets, amber products, information about the formation of amber.

The exposition occupies a small hall located in the Russian Amber store, at the address: 11 Gagarin Street, Svetlogorsk.

The layout of the Medieval Konigsberg

The basis of the project is the layout of the castle-fortress of Konigsberg, from which only a small part of the ruins (excavations) remain in Kaliningrad, and three medieval cities: Altstadt, Kneiphof and Lebenicht, located near the castle.

The layout is located at the address: Svetlogorsk, Gorky Street / Hoffman Lane, next to the 3-star guest house "Storyteller's house". Learn more about the layout of the Medieval Konigsberg...

The composition of the rockery alpine slide is a small open-air museum, where there are a monument and sculptures dedicated to the work of Ernst Theodor Amadeus Hoffmann.

The composition is based on the plots of fairy tales by the German writer, composer, artist and lawyer of the Romantic era, as well as the countryman of all Konigsberzhtsev (and now Kaliningrad residents) E.T.A. Hoffman, who was born in Konigsberg on January 24, 1776 in a house near the lower castle lake (now Lower Pond in Kaliningrad) on French Street.

Access to the composition of the Alpine slide is free (free).

The island is surrounded on all sides by the waters of the Pregolya River and divides it into two branches - the Old Pregolya and the New One. In Prussian, Kneiphof means "a place surrounded by water."

In Prussian times, there was a whole city (locality) on Kneiphof, which had 28 streets, 304 houses, tram tracks, a square, a market and a Cathedral. During the Second World War, the island was almost completely destroyed. The cathedral was restored in the 1990s.

Currently, on the island of Kant in Kaliningrad there are: the Kaliningrad Cathedral, the grave of Kant, a sculpture park, a Honey bridge connecting the island with a Fishing village, as well as a sports ground.

The layout is located on the central square of Svetlogorsk. Learn more about the Central Square in Svetlogorsk...

Museums and Exhibitions in the village of Otradnoye, Svetlogorsk

The Hermann Brachert House Museum is a museum located in the former Brachert country house, where the family of the German sculptor lived from 1933 to 1944.

There is an exposition in the house-museum, exhibitions, music evenings, various thematic programs and other cultural events are also held.

Admission to the museum's exposition is 100 rubles.

The Brachert house is surrounded by a small garden park. Admission is free (free).

In the park: walking paths, lawns, places to relax, sculptures and monuments, both created by Herman Brachert himself and other Russian and foreign sculptors.

The Amber Period Park is an open-air area for family recreation.

It can also be called a kind of museum, because on the territory of the park, in addition to entertainment, cafes and a mini-zoo, there are sculptures, a thematic area "Dinosaurs" and other decorative objects.