Ao Sane beach in Phuket - lost in the jungle

We recommend: Booking hotels on Phuket at the best prices

The Sein AO/AO San (Ao Sane Beach) - small beach located in the lagoon on the South West coast of Phuket. Although this beach can boast of its size, but it stands out compared to other beaches on the island. The hallmark of the AO San is the fact of concealment of the beach from prying eyes, he is quiet hidden in a forest of jungle. No wonder, this beach is also known as the beach of the Jungle (Jungle Beach).

AO Sein is a small, very mysterious, quiet and secluded beach. It is suitable for a comfortable and relaxing stay. Here you will not find an abundance of cafes and restaurants, shops and hotels, no music and an evening of idle life. 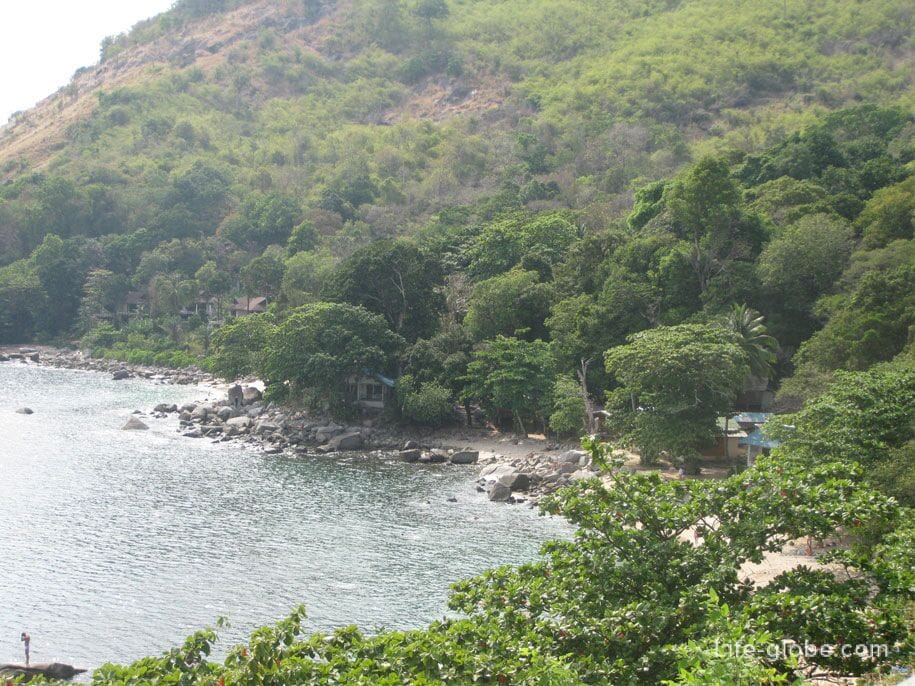 The beach strip of AO Sein is quite narrow, here is a large yellow sand, feels like big sugar, mixed with stones ranging from small to large boulders scattered around the perimeter of the beach. 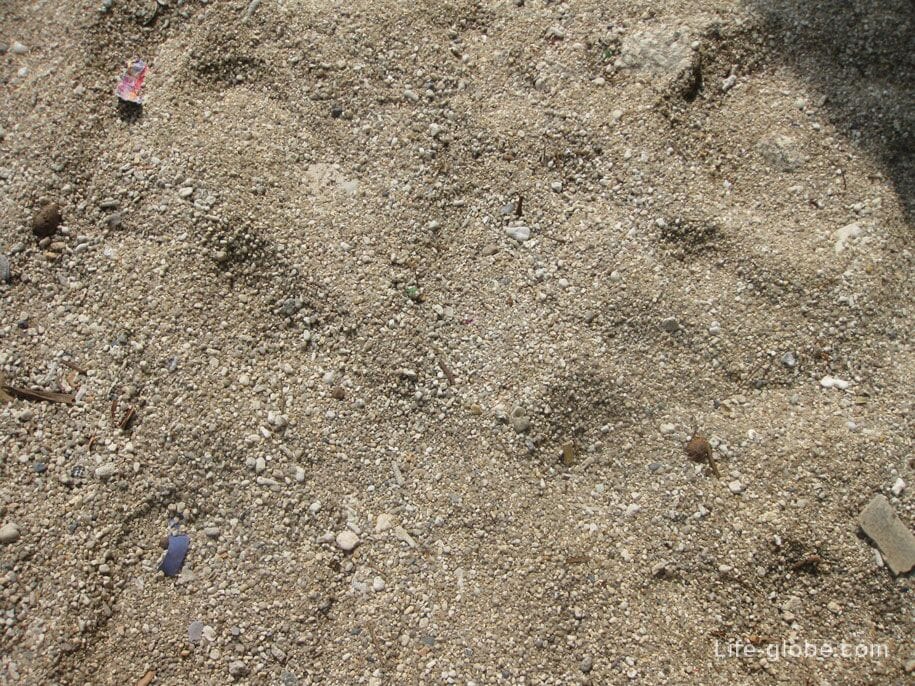 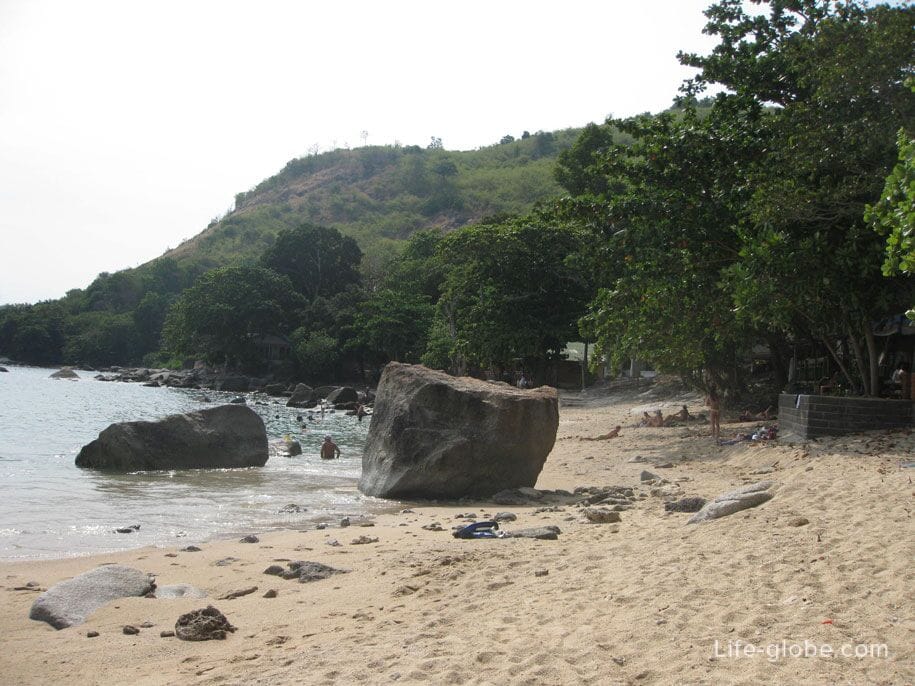 But the sea water that washes the coast of AO Sein beach, clean and transparent. In this place prefer to spend your time fans of snorkeling and diving. 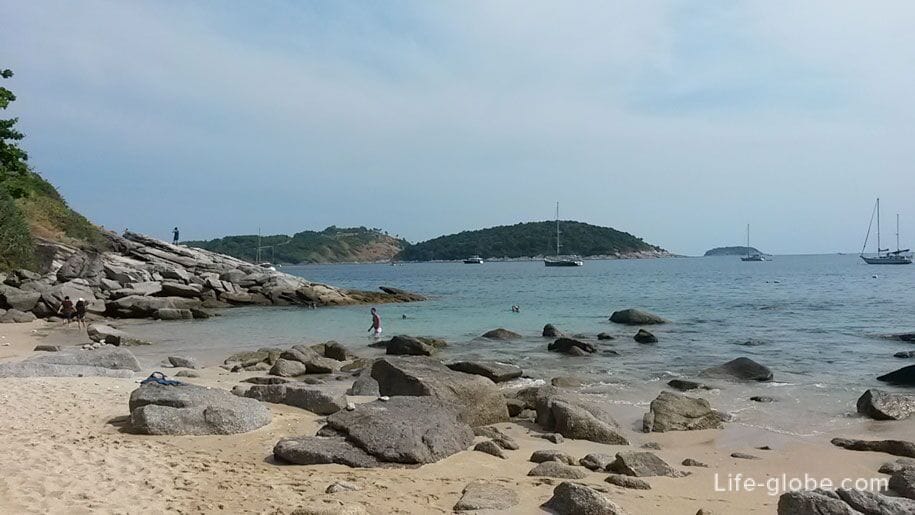 A mask and a snorkel, and fins and diving equipment can be rented here, on the beach. 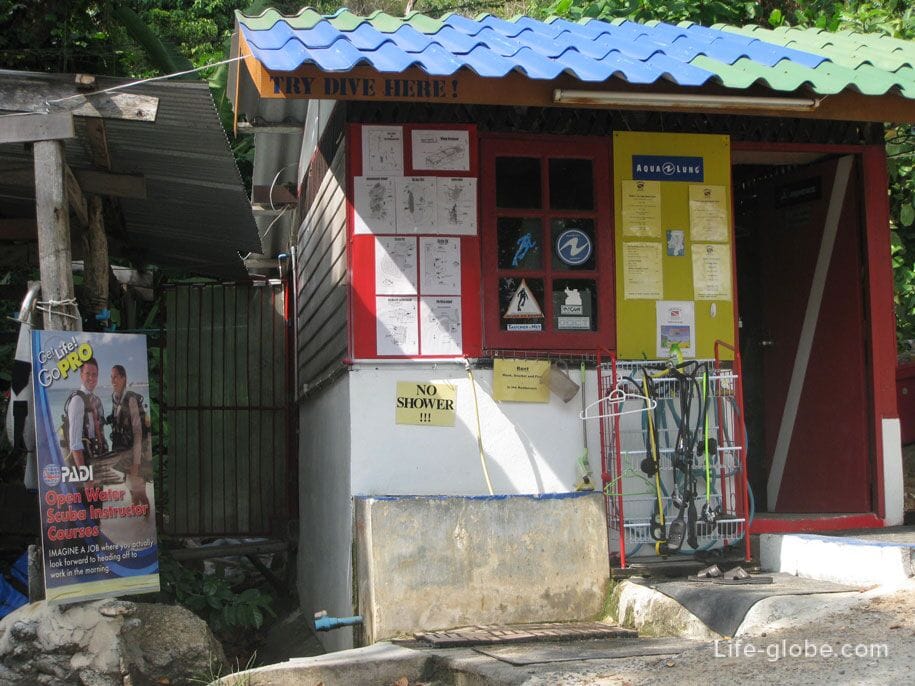 Find natural shade on the beach is not a problem as the canopy of trees cast a shadow on most of the beach. On the beach there are also sun loungers and parasols. The cost of two sunbeds and a sun umbrella 200 baht a day. 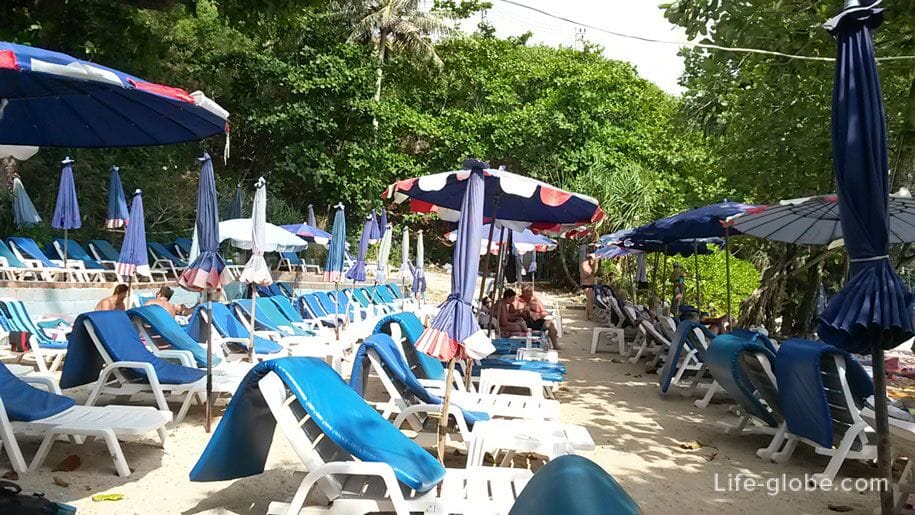 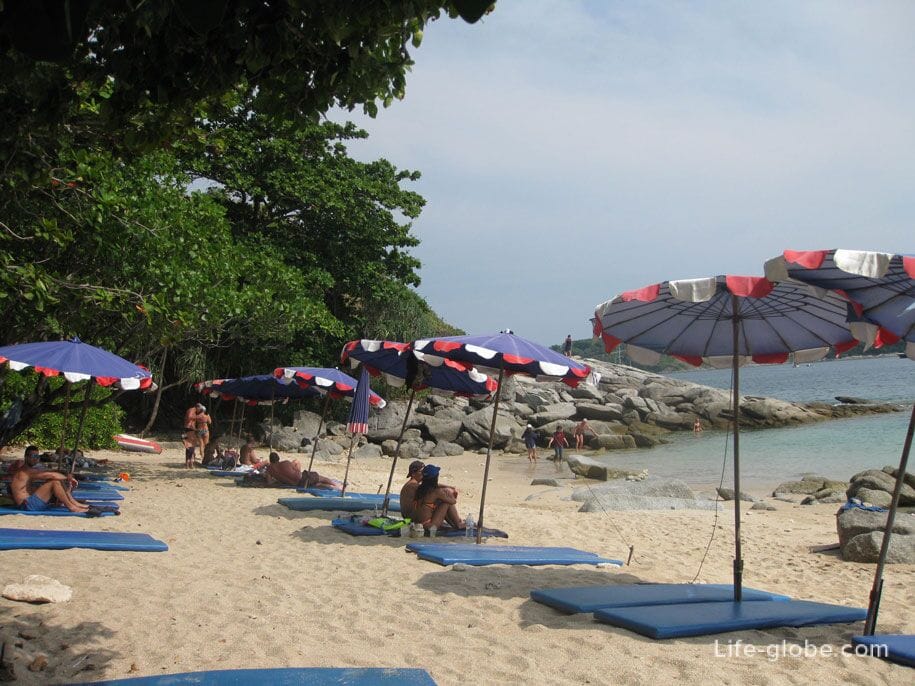 Although the beach is considered secluded and don't know many, however in high season the beach is quite crowded. The majority of beach visitors are European tourists and divers. 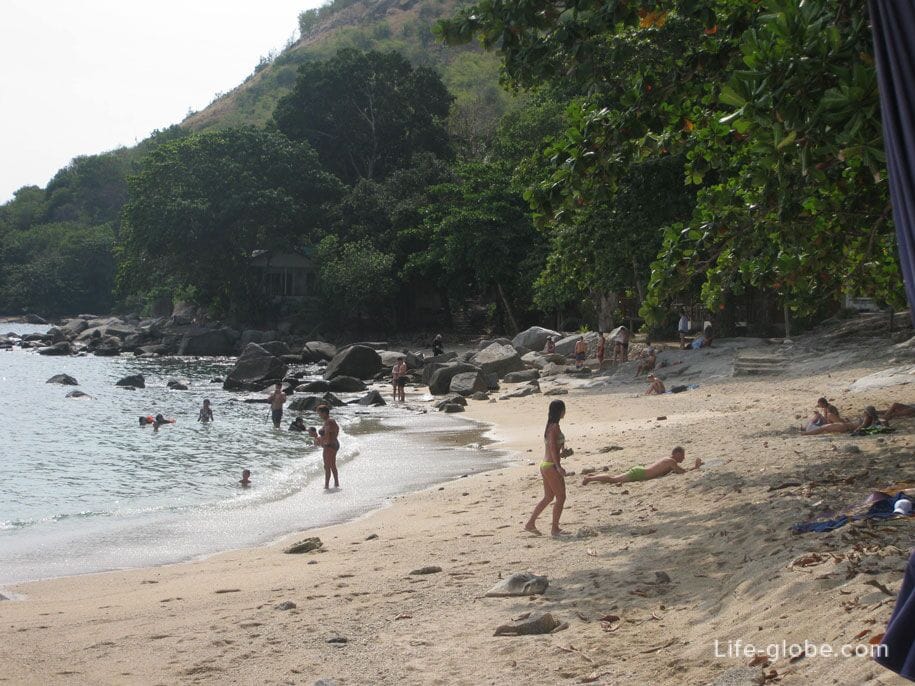 On the beach with a view of the Promthep Cape and the windmills, located at the observation platform, Windmill viewpoint, close to the beach Yanuy. 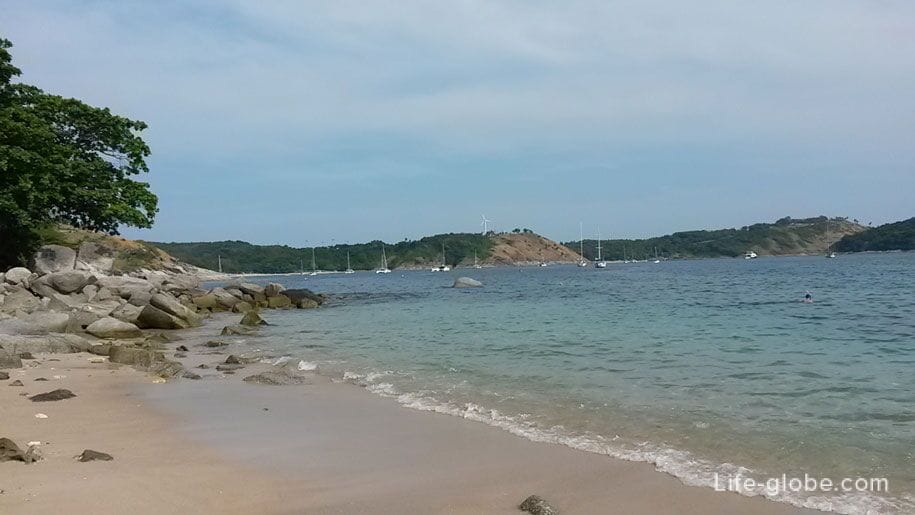 Conventionally, the AO Sein is divided into several beaches, stones and boulders extending into the water. To travel from beach to beach, on the water, breaking the stone walls, or along the road above the beach.

On the largest stretch of beach at AO Sein, he is the most accessible, the most developed and visited, there is a Thai restaurant Ao Sen restaurant, nestled among lush vegetation. The rest, a few cafes are situated above the beachfront, along the road. 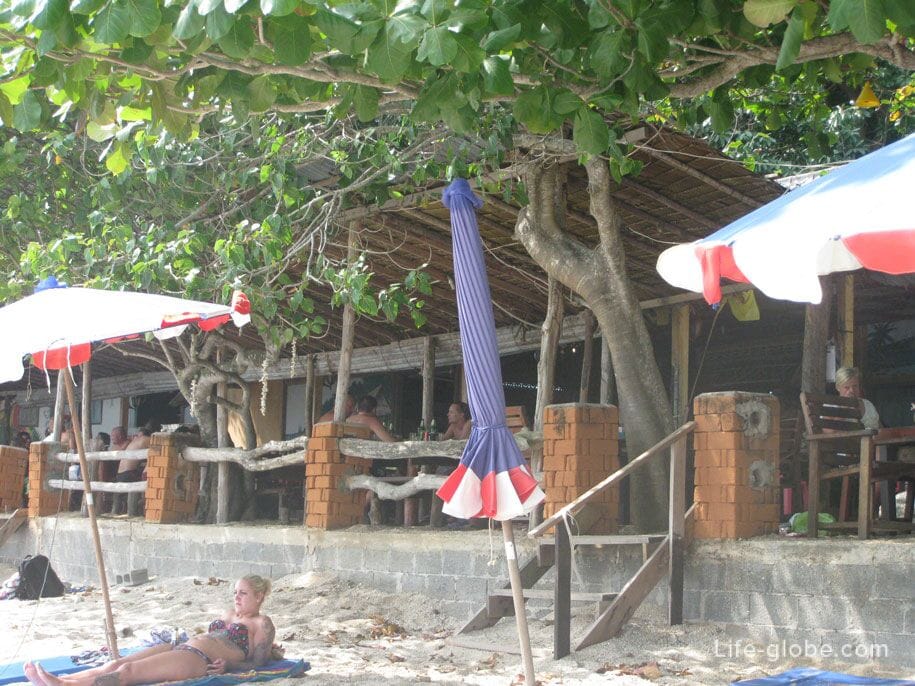 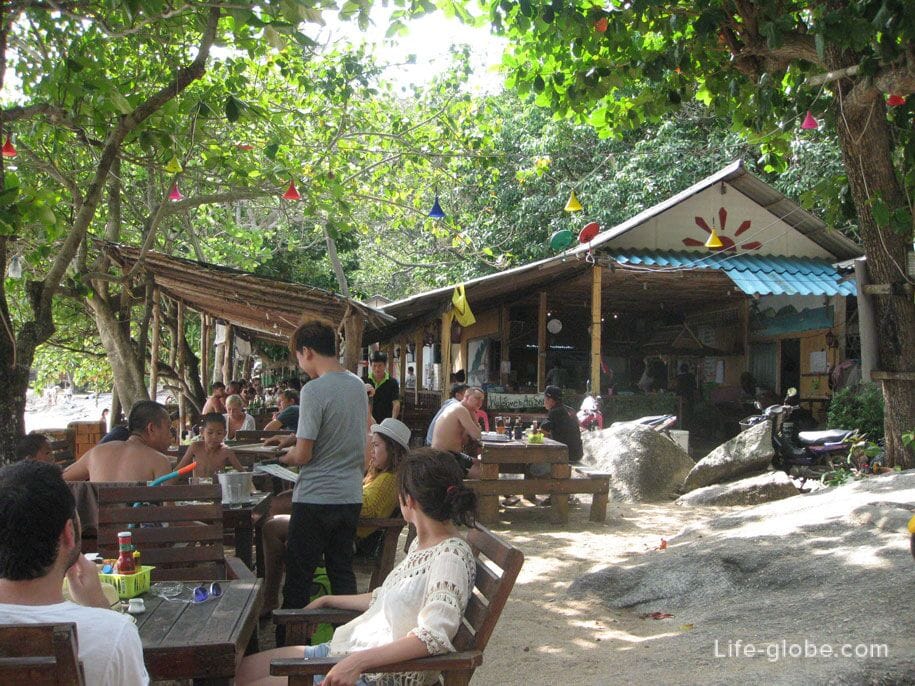 To get To this part of the beach on foot, following from Nai Harn beach, through the eponymous hotel the Nai Harn, the passage is free. Follow along the sea up the hill, then down you will reach the Parking near the beach, AO Sein.

The descent to the beach is decent and convenient 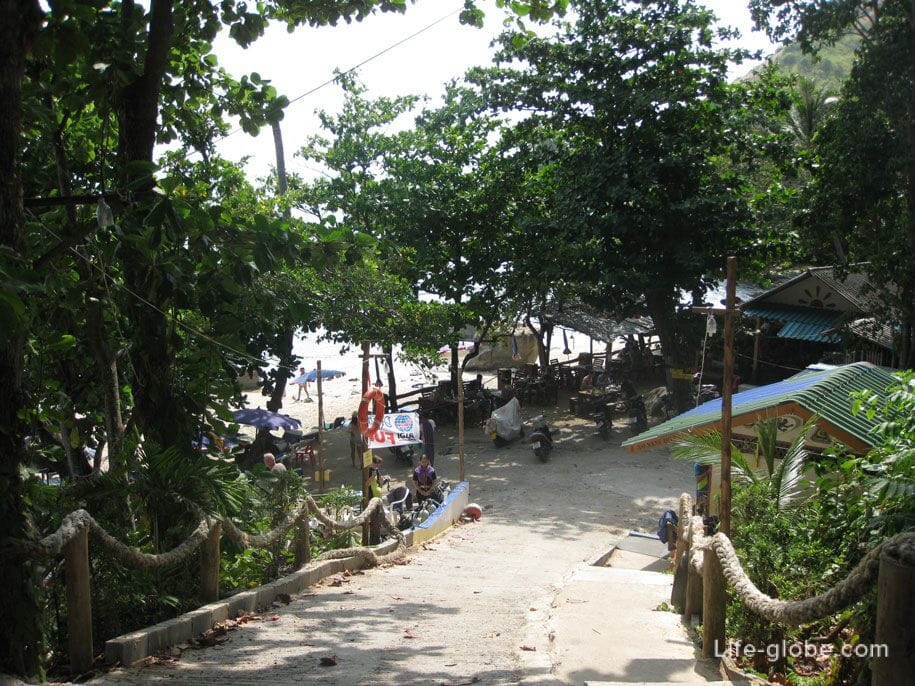 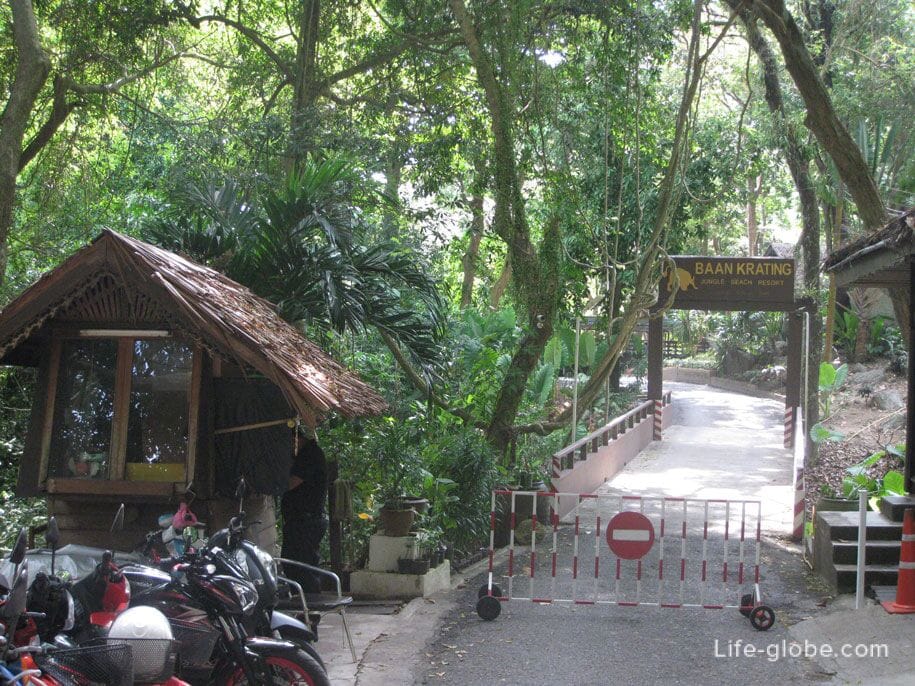 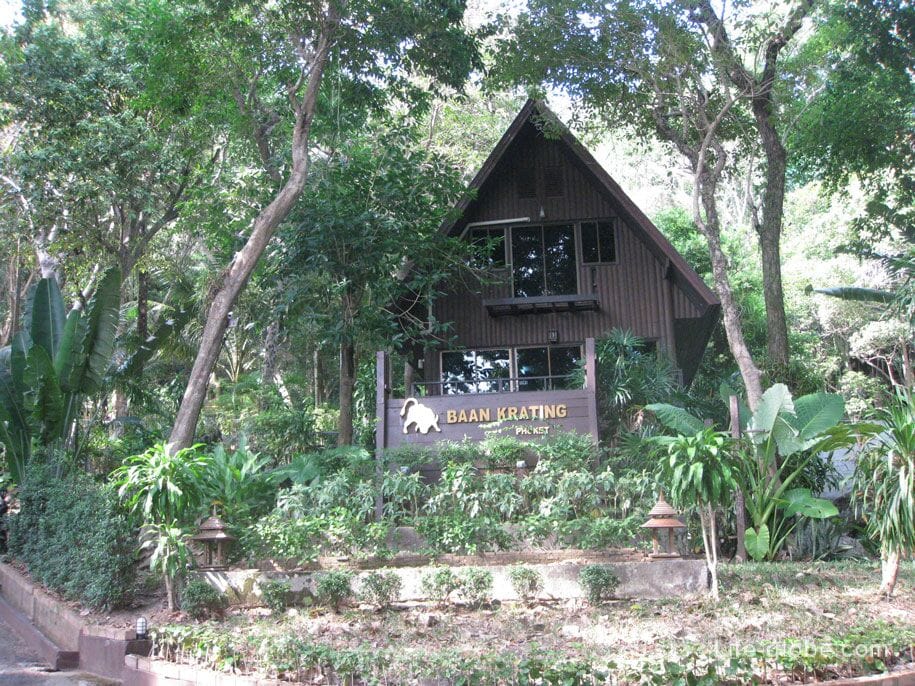 And this is the descent to the beach on the property 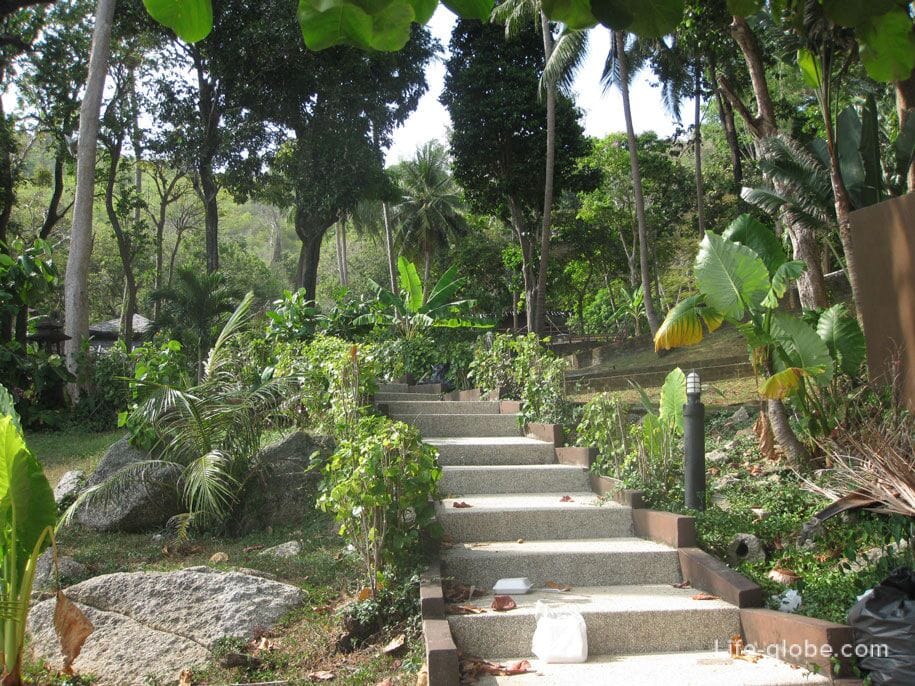 This part of the beach even more "secret" and not crowded. There is also a large sand mixed with stones and large boulders. Natural shade under the trees. 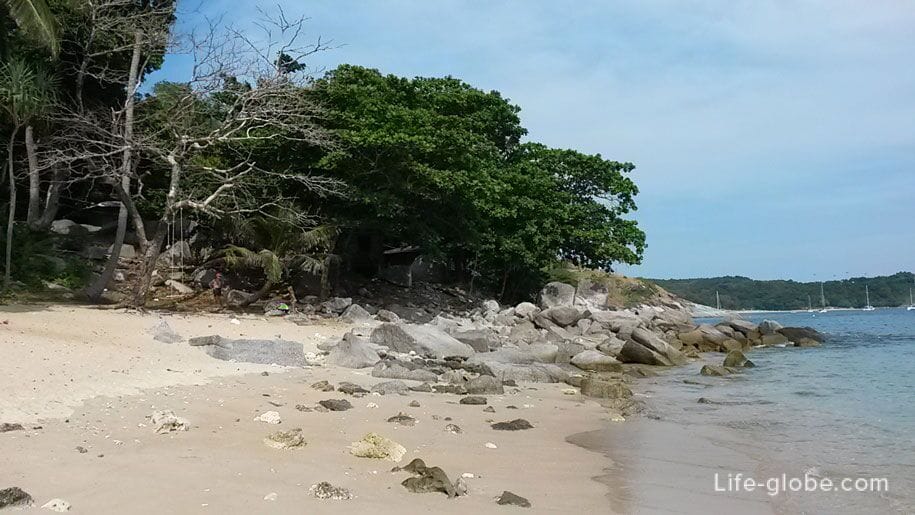 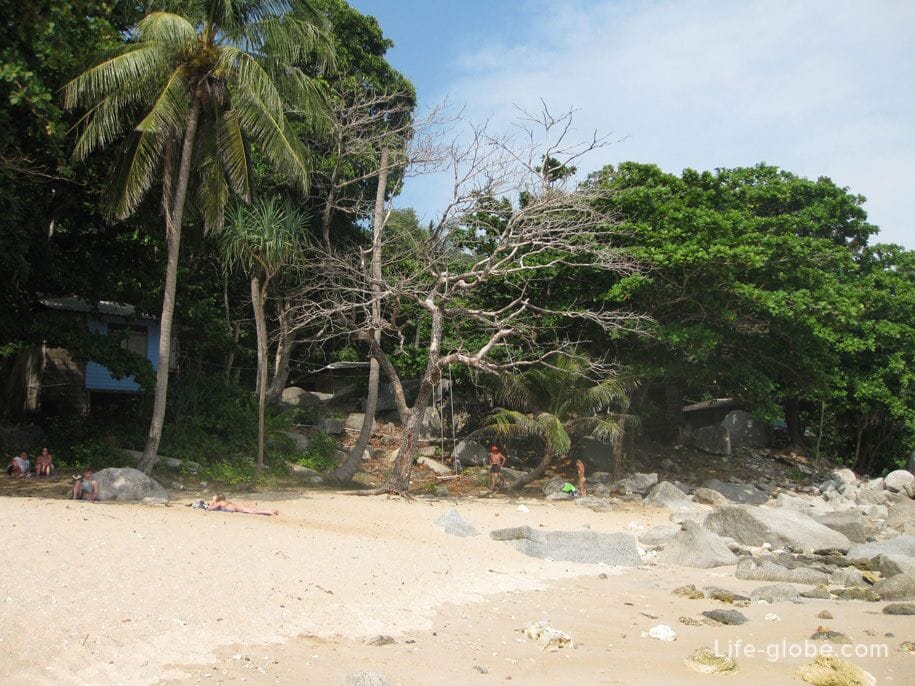 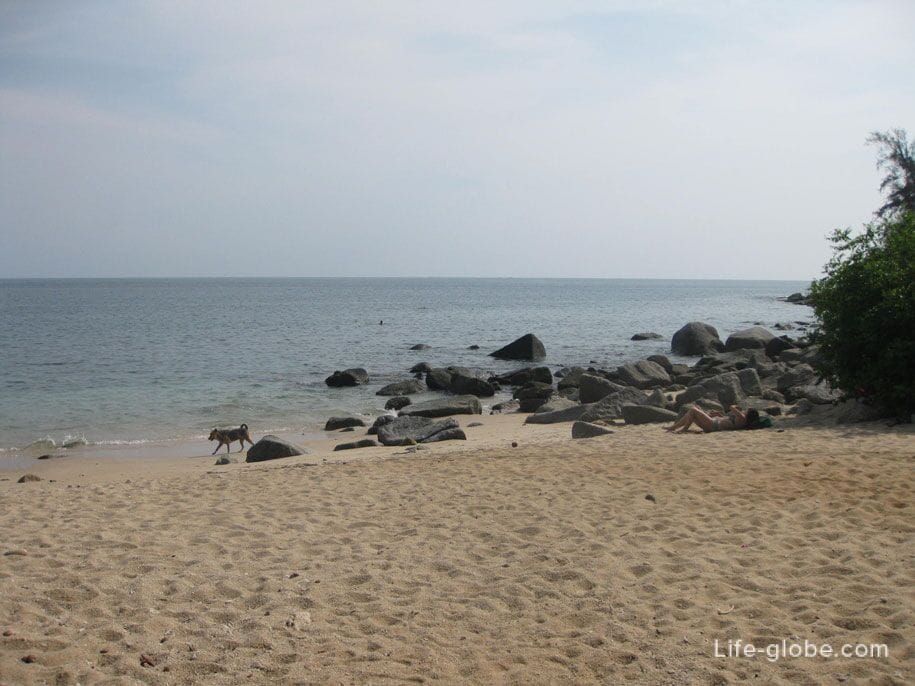 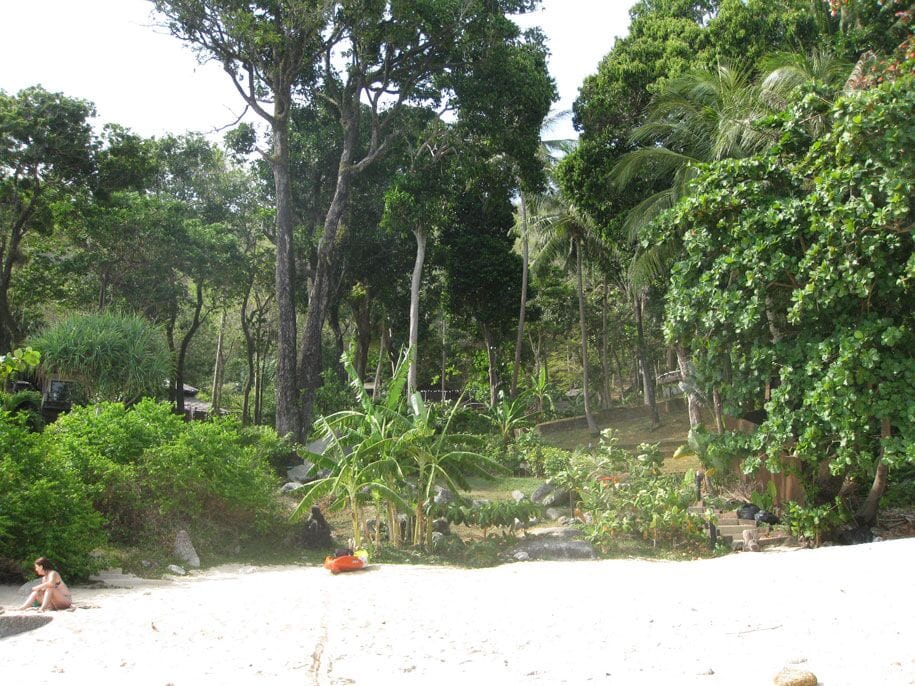 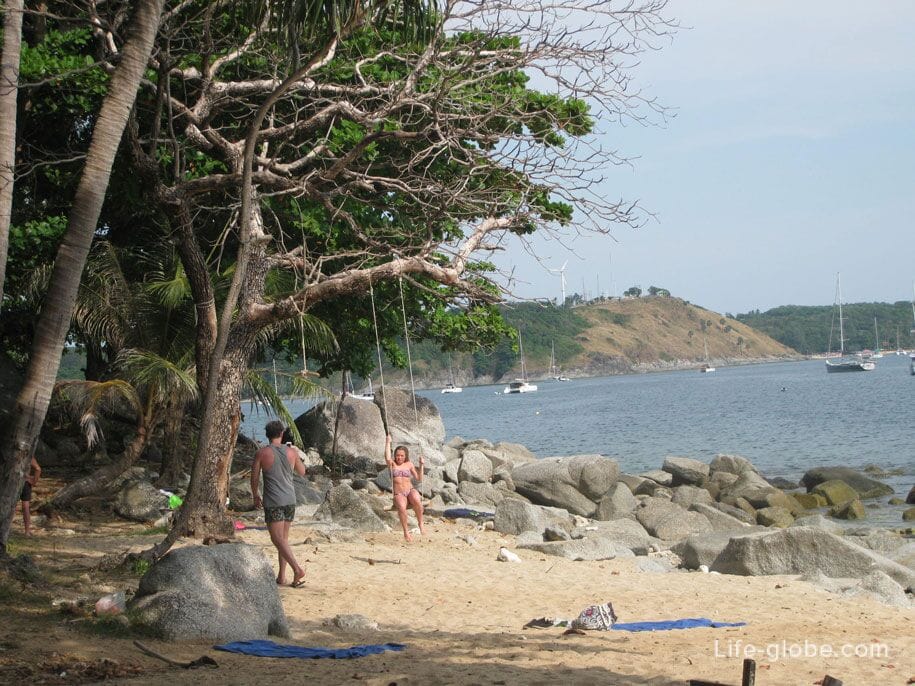 Within walking distance is the picturesque and sandy beach of Nai Harn, on the territory of which includes sights such as:

- lake with a small Playground; 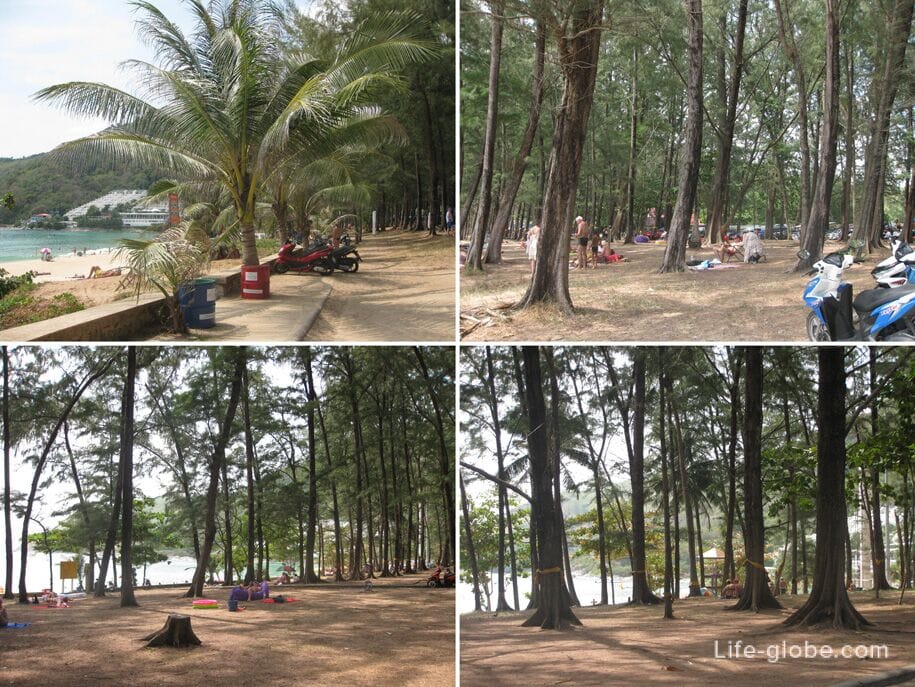 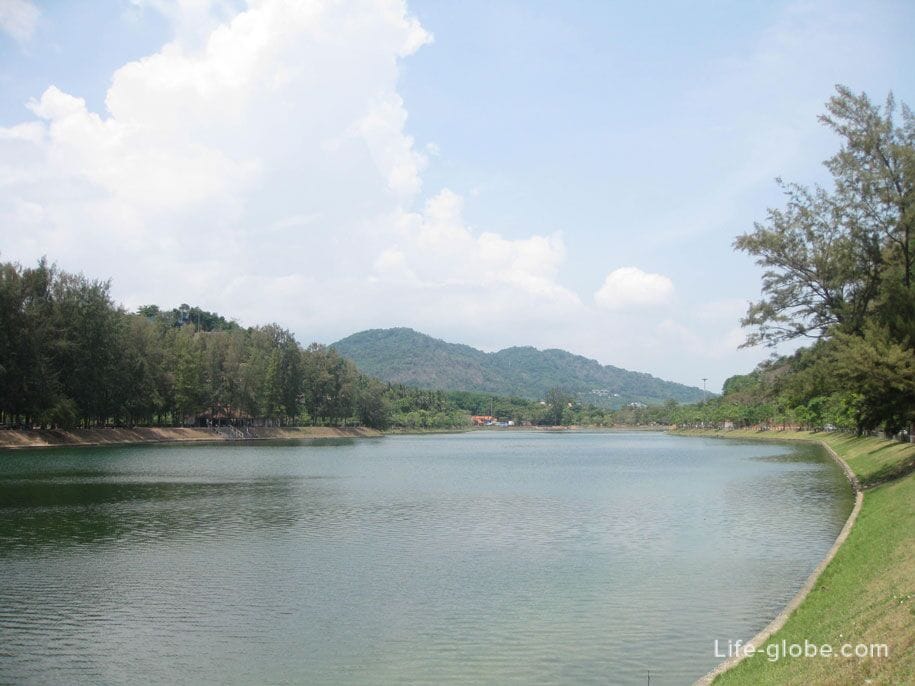 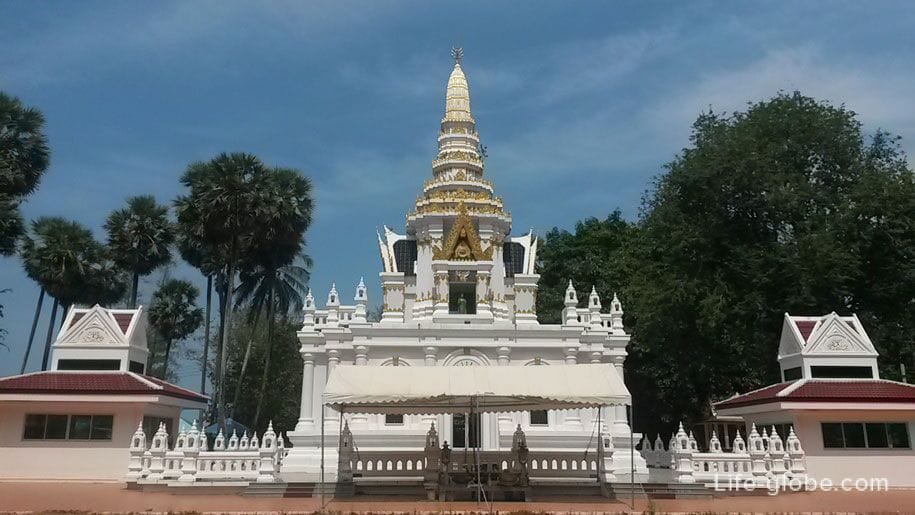 Not far from AO Sein located:

1. Lookout Yanui view point or, as it is called, Windmill view point, which offers a beautiful view on the beach Yanuy, part of Nai Harn and the surrounding area. Distance from Nai Harn beach up to the observation deck is approximately 2.2 kilometers. You can walk or ride on a rented bike, moving along the sea to the beach Yanuy. 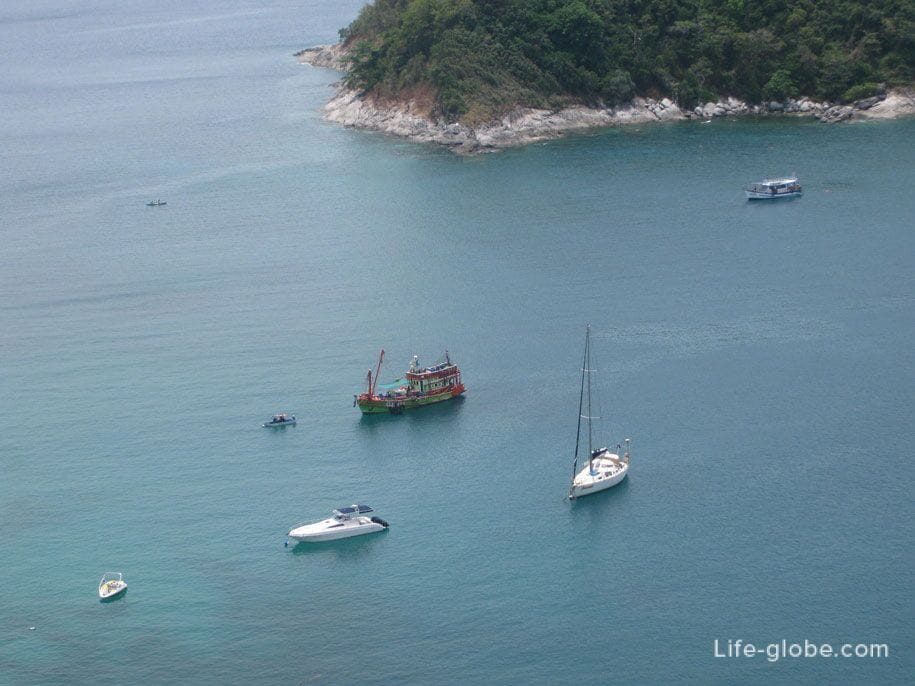 2. Promthep Cape with a viewing platform. Promthep Cape, the southernmost part of the island, in addition, above the promontory is an observation deck (on maps labelled as Outdoor View Point) which offers picturesque views of breathtaking beauty.

Distance from Nai Harn to Cape Promep is approximately 3.5 kilometers. Can be reached on foot by following the Rawai beach along the sea. Or is a songteo (local public buses) to Rawai beach, come out better on the fork in the road from the hotel Rawai Palm Beach Resort, and then on foot, breaking the path of 2 kilometers. 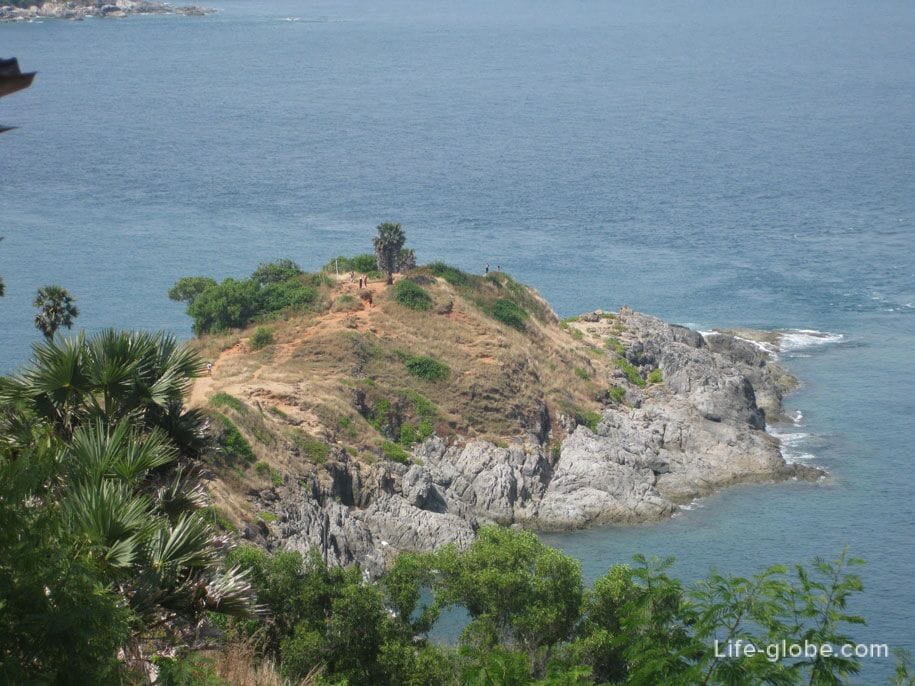 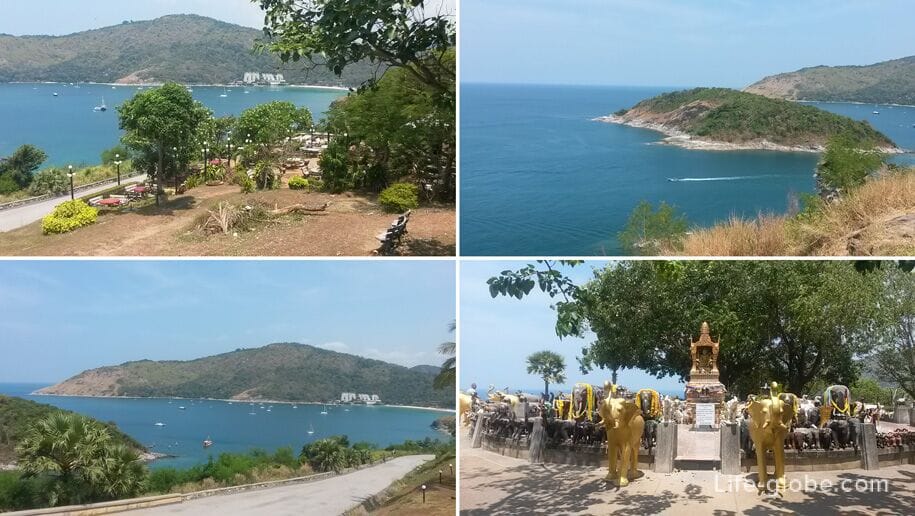 3. Seaview elephant camp, Karon View Point, which offers spectacular views of three beaches - Karon, Kata and Kata Noi. The distance of little more than four kilometers. You should move in the direction of the beaches of Kata and Kata Noi. 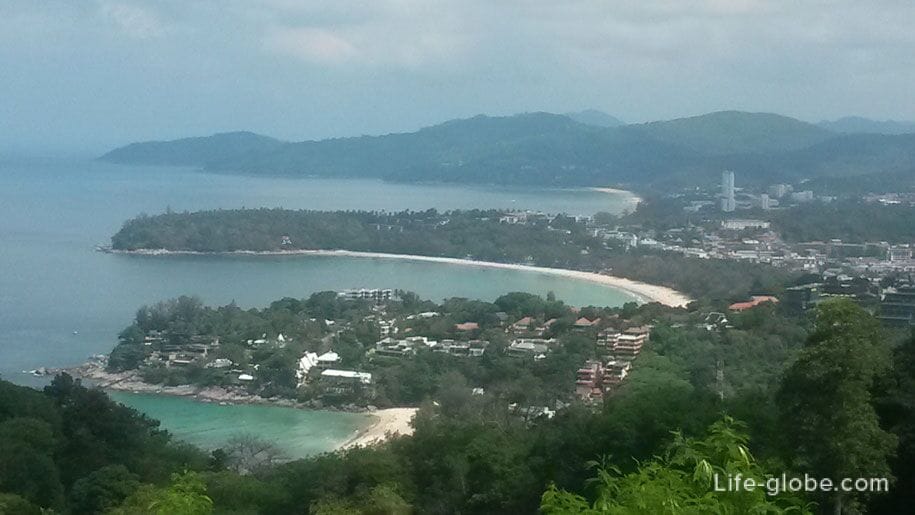 Where to stay in AO Sein

Accommodation near the beach not so much, of which a few bungalows and a few hotels:

- the hotel Naiharn On The Rock. Hotel public free Wi-Fi and a swimming pool. In addition, the hotel offers Luggage storage and free private Parking. 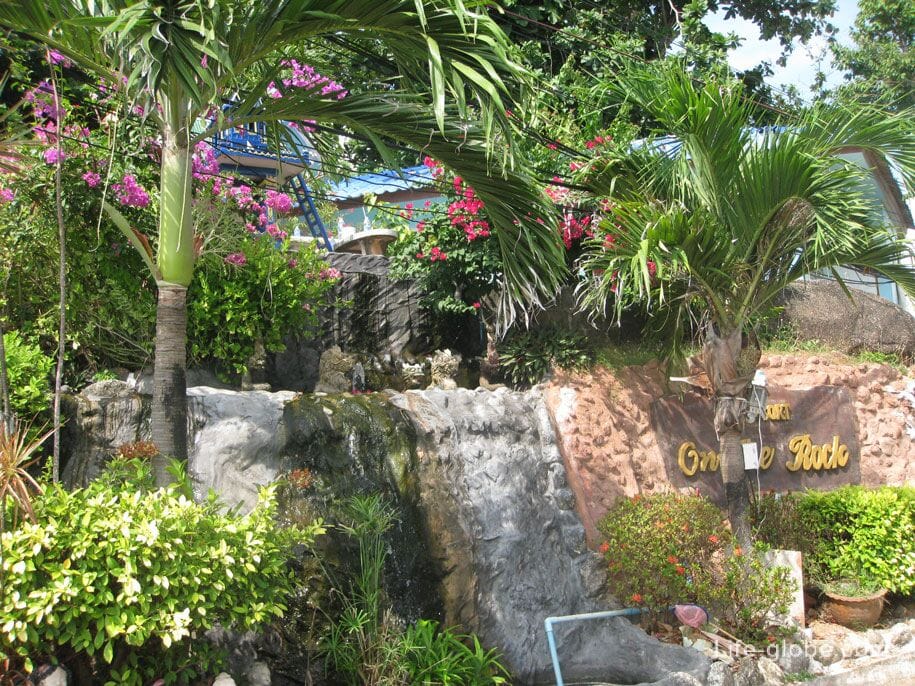 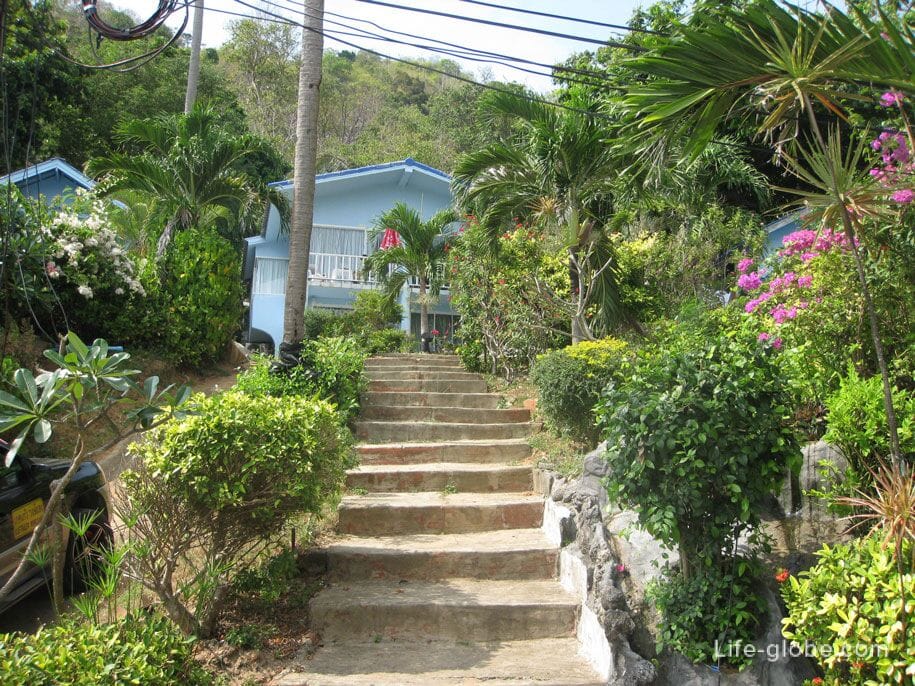 resort Baan Krating Phuket Resort. The hotel features a restaurant, an outdoor pool and free Parking. Air-conditioned rooms feature Internet access, satellite TV, private terrace with views of the ocean or the forest. Also offers equipment rental for snorkeling and kayaking. Around the clock, an outdoor restaurant, which serves international and Thai cuisine. Breakfast is included with room rates.

You can also stop at the beach of Nai Harn and AO Sein to walk, the road will take about 10 minutes of slow pace, a distance slightly more than a kilometer.

The closest to the AO San hotel located on Nai Harn, this - The 5-star The Nai Harn. The hotel offers scenic views of the sea and the beach. It offers comfortable rooms and suites with spacious balconies overlooking the sea. Room rates include Breakfast. 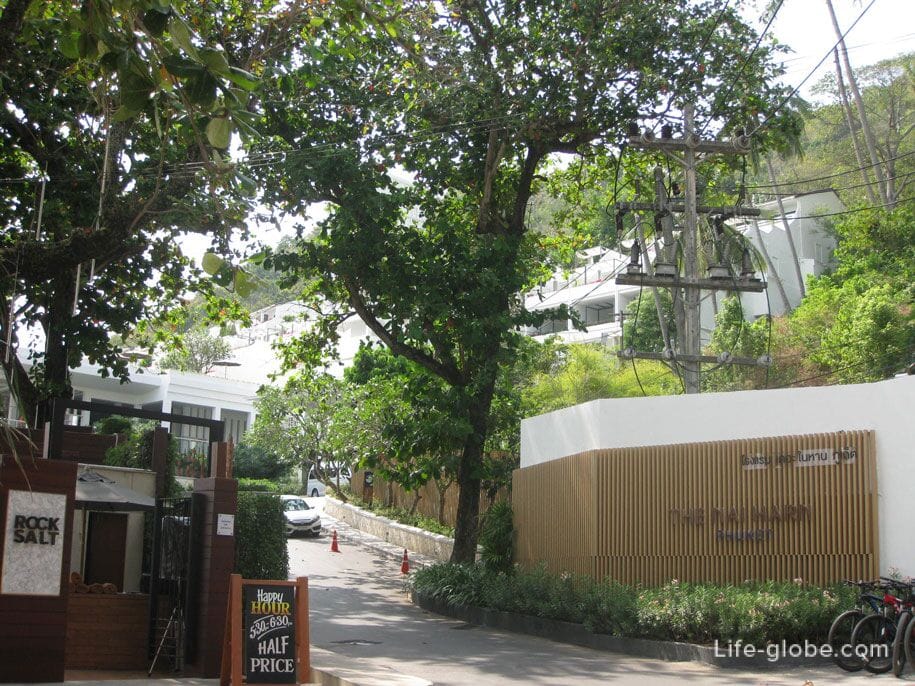 How to get to AO Sein

From the airport, on the bus, with a stopover in Phuket Town. On the first bus from the Airport to Phuket Town drive to Phuket Town, then, from Phuket Town, with the streets of Ranong, on the local bus (songteo) "Phuket - Rawai beach - Rawai" to Nai Harn end of the line. The fare is 40 baht. Then walk or taxi to AO Sein.

You can also rent a motorbike or car. Well, that's easier, you can book a private transfer in advance. At any time of the day at the airport, you will meet your driver with a sign, which will be written your name and surname. For taxi is enough to tell us your flight details.

From Kata and Karon beaches

Via Phuket Town. Or, is it faster to go on the ring Chalong and wait for the bus "Phuket Town - Rawai - Nai Harn".

Walk or drive to Kata beach, a distance of approximately 1 kilometer. And then, according to the instructions above.

With other beaches of the island

The last bus from kata beach to Phuket Town start at around 16:00 - 16:30 hours. Stuffed under the strap that ties behind, better to come in advance.

Kamala beach in Phuket - the harmony of ...