In the urban-type settlement of Yantarny, located in the Kaliningrad region, there are two observation decks and several observation points from which panoramic views can be enjoyed, including the Baltic Sea and beaches, some surroundings and an operating amber quarry.

Observation deck of the Primorsky quarry

The observation deck of the existing Primorsky open-pit amber quarry is a unique tourist attraction, since visitors to the site, located at an altitude of more than 50 meters, can observe in real time the work in the amber quarry - the only place in the world where amber is extracted on an industrial scale by open-pit mining.

Lookout career is part of the complex under the open sky, which includes, in addition to the observation, the following tourist facilities: landscaped area; the pavilion dining, shopping hall and WC; observation tower; "the Amber pyramid"; "amber tree"; attraction "the amber"; the layout of the entrance to "Mine Anne"; layout of "Hangman" and some of the equipment for mining.

The complex of the observation deck of the Primorsky quarry is located just south-east of the village of Yantarny. 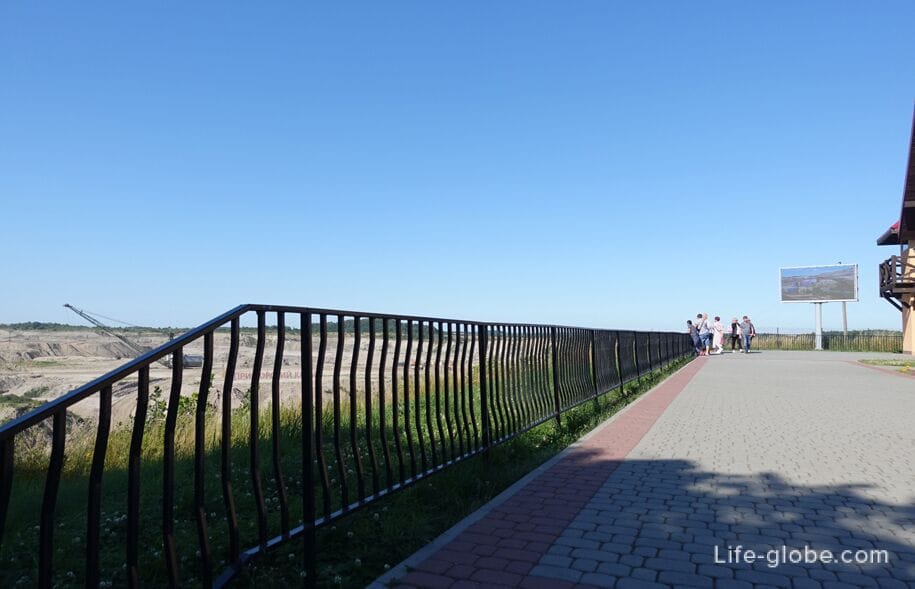 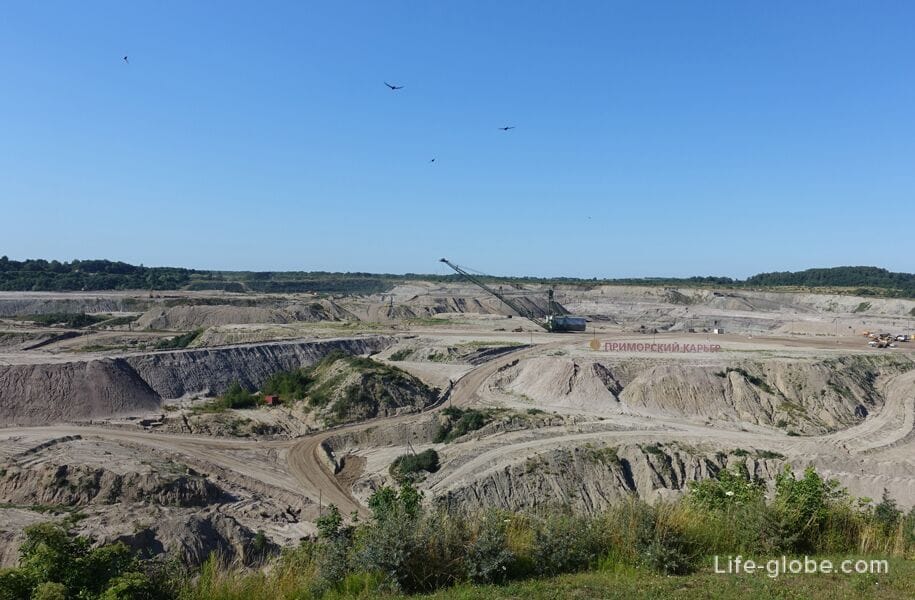 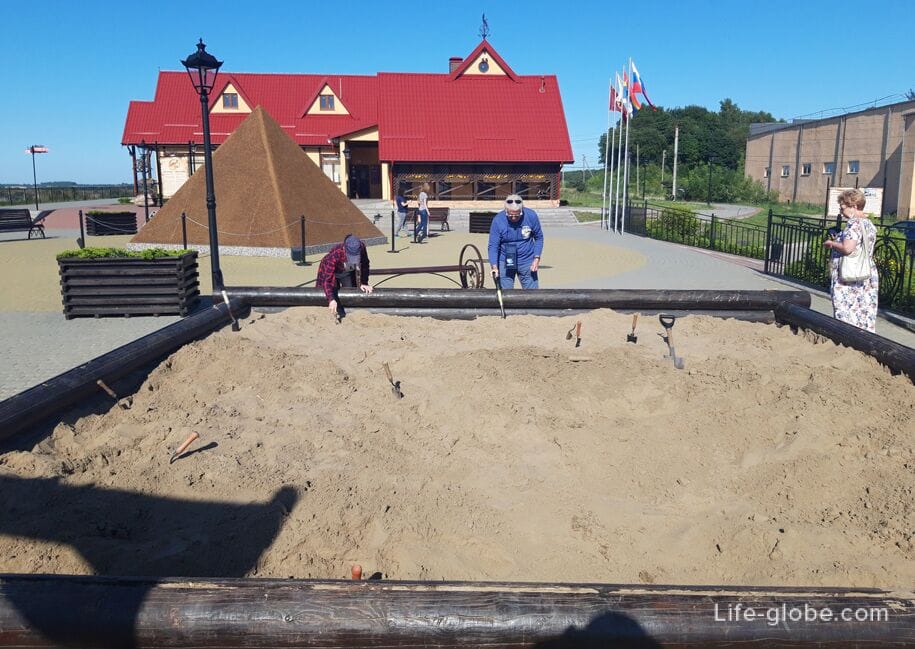 The Anna mine is the former Anna amber mining mine, which was founded in 1883 in the village of Pilmniken (now the village of Yantarny, Kaliningrad region).

Since 1922, due to unprofitability, work began on the conservation of the mine, and soon the production was closed.

Currently, only small remnants remain of the Anna mine, including the remains of the Anna mine retaining wall, above which there is a small observation deck "Anna Mine".

The observation deck is a small piece of soil.

The site offers panoramic views of the coast, quarries, part of the beach strip, the Baltic Sea and the monument to the victims of the Holocaust. 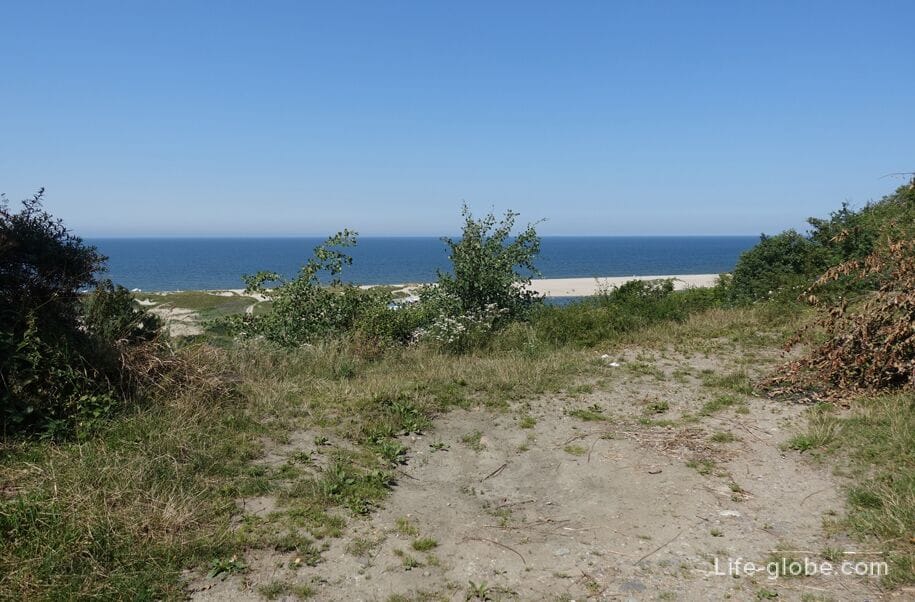 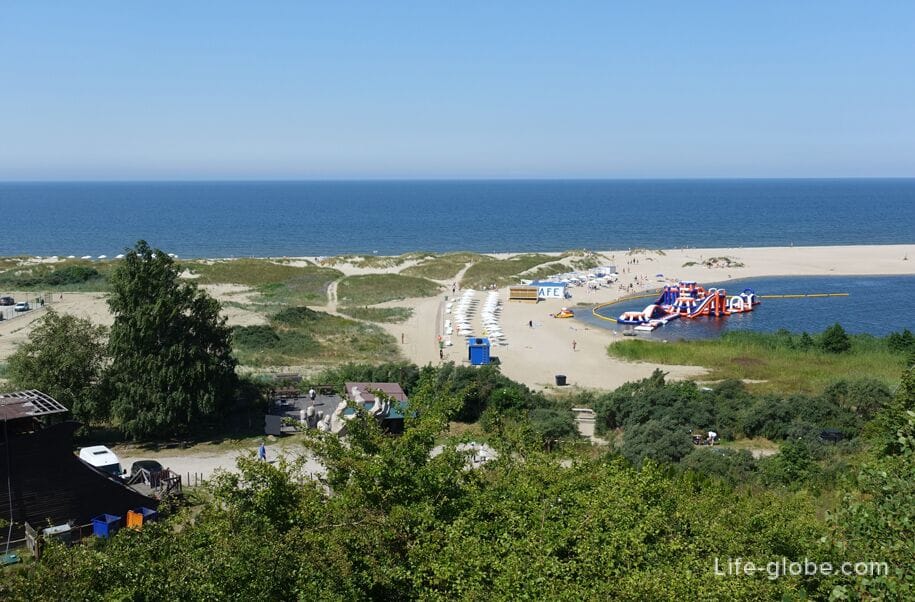 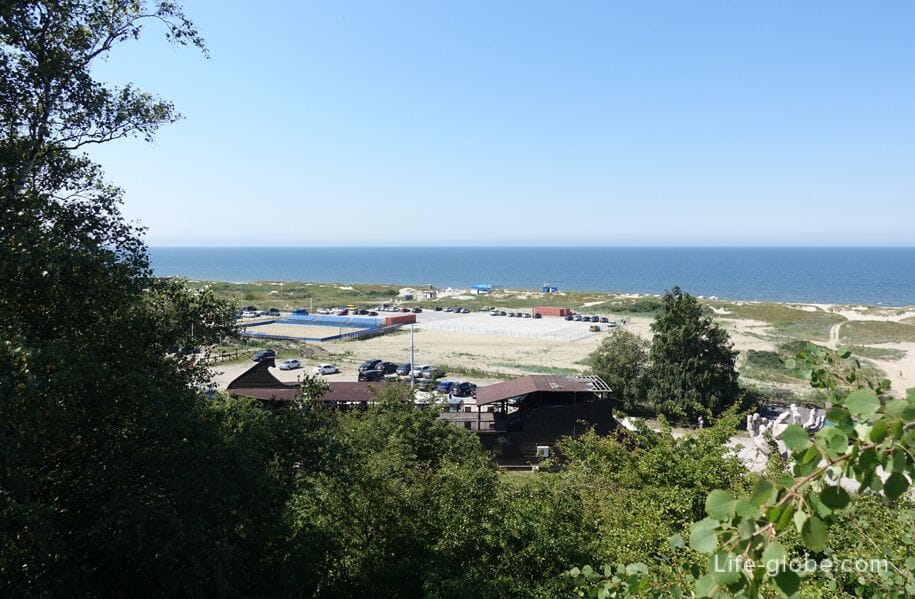 Below the level of the site, near the beaches, there is a cafe with tables located on an outdoor terrace with views of the coast. 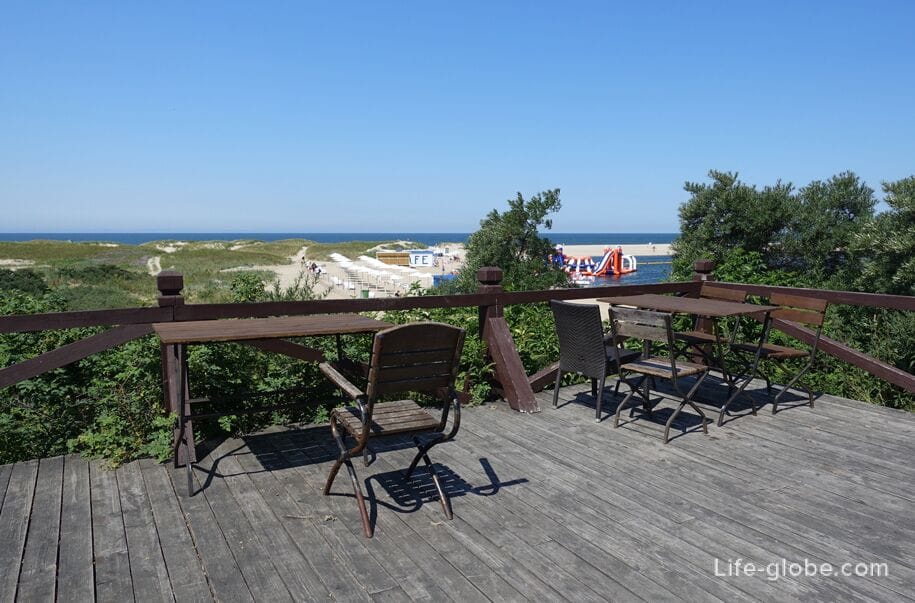 Becker Park (Moritz Becker Park) is a city park, which is a historical monument and the pearl of the village of Yantarny.

The park is located in the center of the village, on an elevated terrace near the Baltic Sea and the Central Beach.

From some points of the park there are panoramic views of the beach strip and the sea. More about Becker Park... 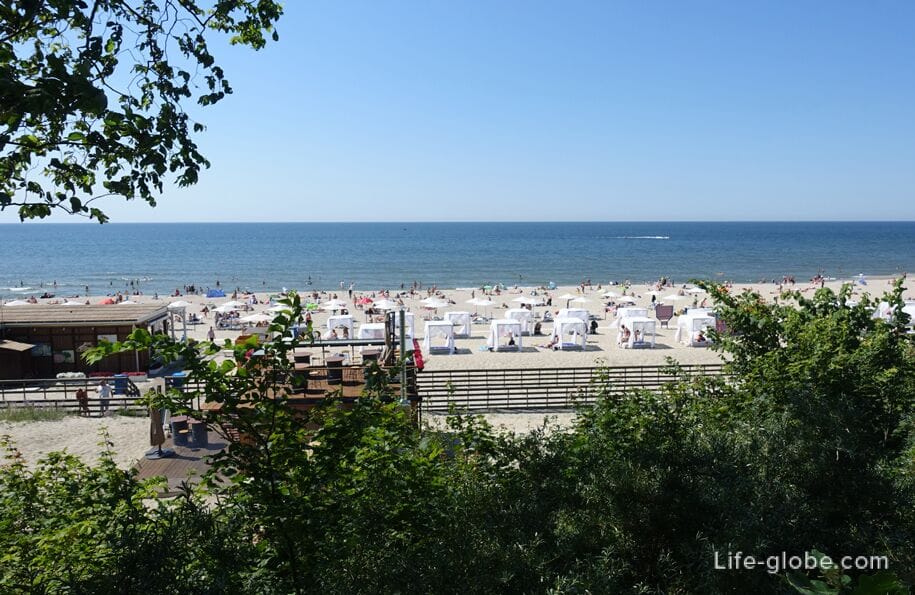 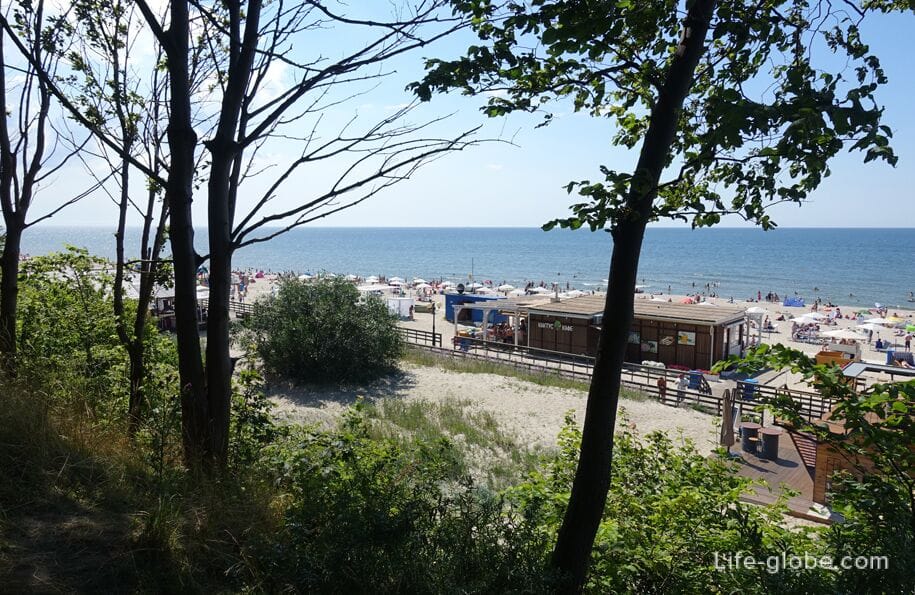 One of the most visited viewpoints in Becker Park is a swing set on a platform above the cliff of the park in such a way that when swinging on them, views of the Amber Beach and the Baltic Sea open up.

The swing is located on a wooden platform, on which, in addition to the swing itself, there are places for rest, urns. Panoramic views also open from the playground and benches. Learn more about the swing... 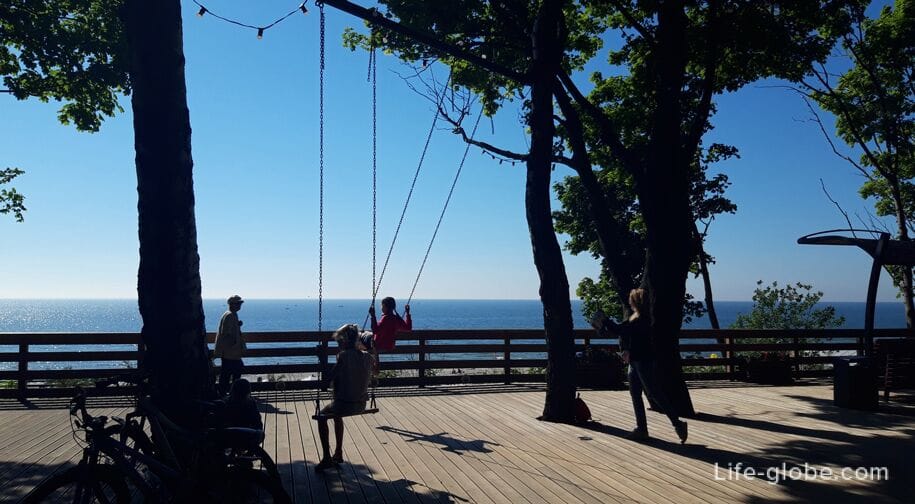 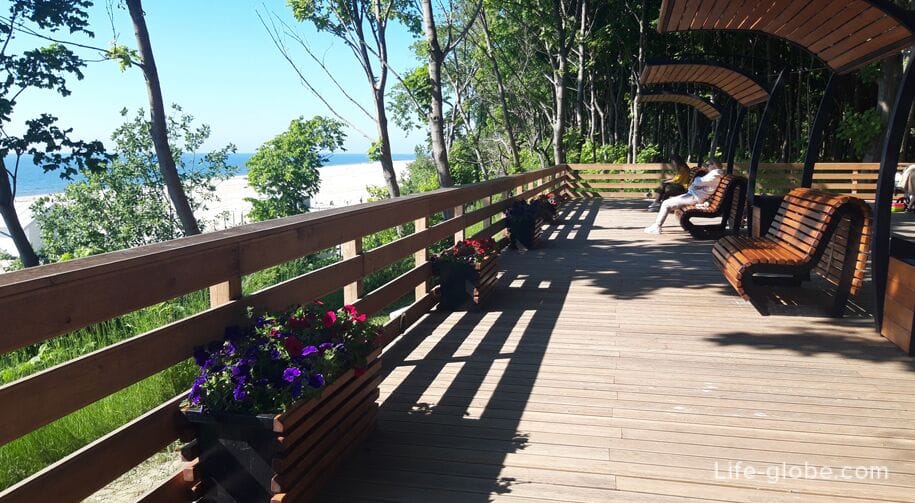 Descents to the beach and the sea

Several descents lead from the center of Yantarny to the beaches and the sea, from which panoramic views of the beach strip and sea waters open.

The most interesting are the descents / ascents:

- Central descent to the sea, which leads from Becker Park (Central Alley) to the Central beach and promenade.

The descent is a wide staircase equipped with a lifting platform for people with disabilities.

The stairs offer panoramic views of the beach, the southern end of the promenade and the Baltic Sea; 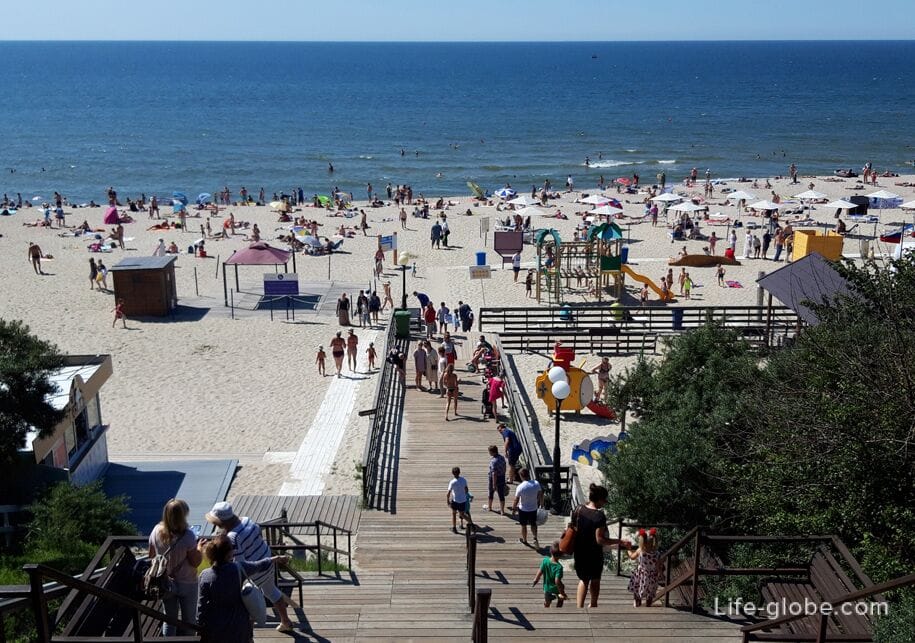 - descent in the form of a ramp that leads from Becker Park (Amber Alley) to the promenade and to the beach.

The descent platform offers views of the beach strip, the promenade and the sea. 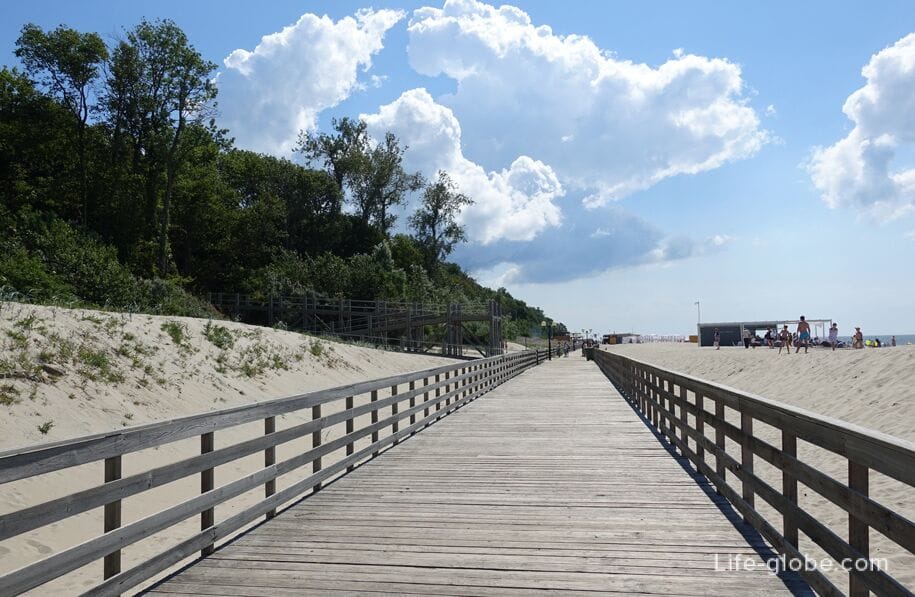 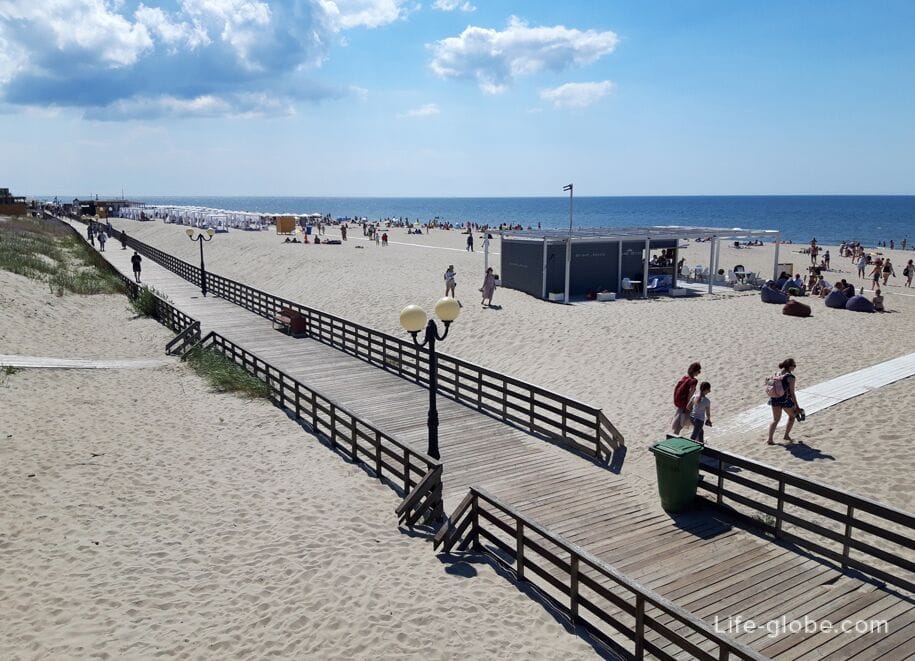 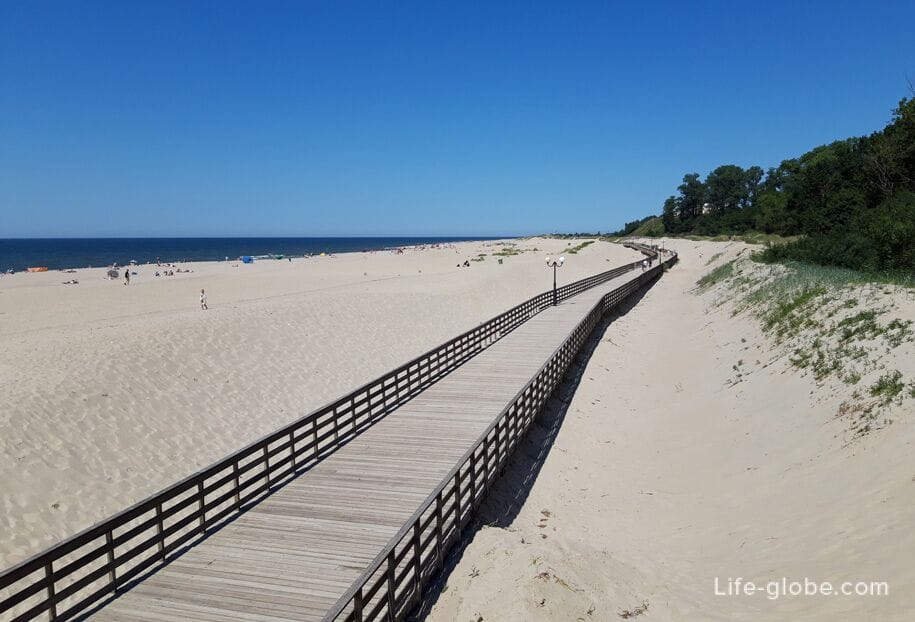 The beach of Lake Sinyavinsky

When the amber-bearing rocks in the quarry were worked out, the quarry was declared unprofitable and closed, after which it was filled with spring and groundwater, resulting in a pond (lake).

From the side of the village of Yantarny near the shore of the lake there is a small beach - the beach of Sinyavinsky lake (the beach of Lake Yantarny).

From the hill near the beach, near the recreation center "Pearl", there are views of the beach and the lake itself. More about the beach of Lake Sinyavinsky... 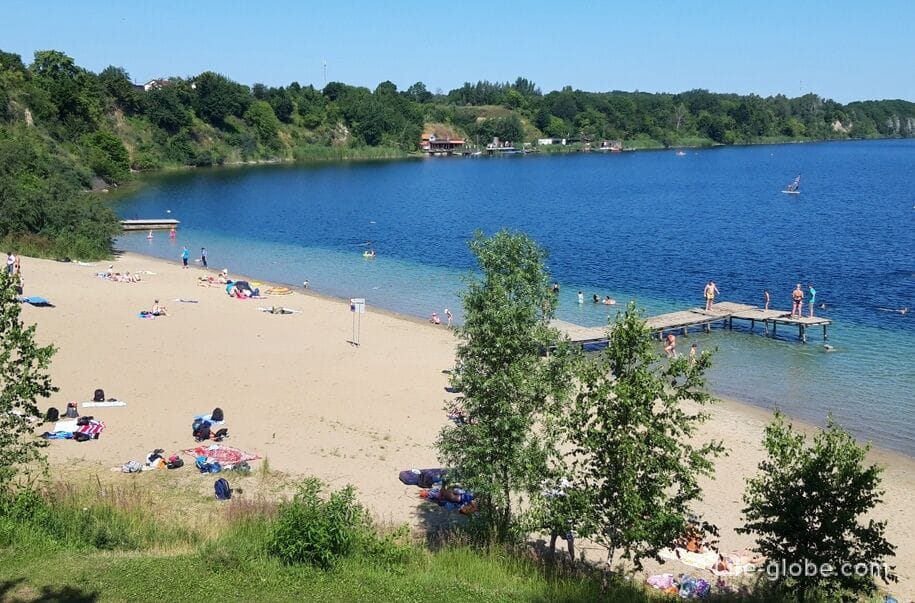 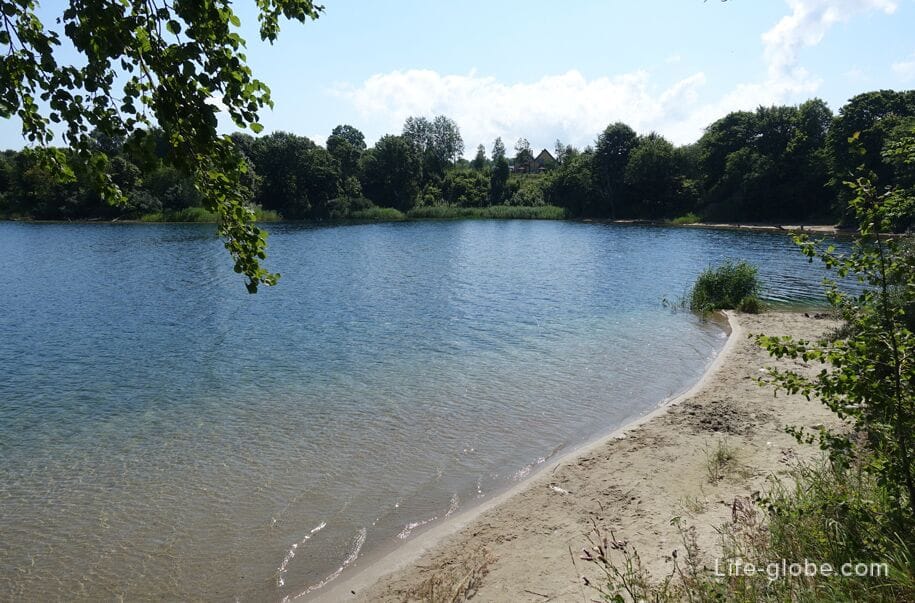 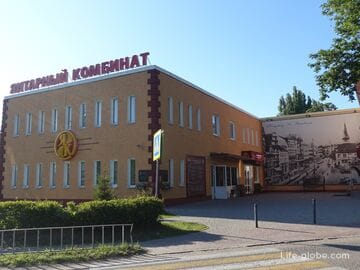 Museum of the Amber Factory in Yantarny ... 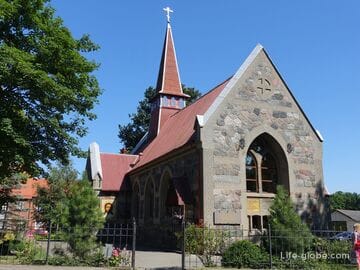 Church of the Kazan Icon of the Mother o...