Embankment of Tossa de Mar - a place for walking and recreation

The promenade of Tossa de Mar is a long promenade, which is one of the main places for walks and recreation among locals and visitors alike.

The length of the seafront in Tossa de Mar is 1 km. A promenade runs from the castle walls of Tossa de Mar, runs along the Central beach and Grand beach Ray and to the Eastern end of the beach Menuda.

Along most of the promenade of Tossa de Mar is road.

Along the waterfront: places to stay; bars, cafés and restaurants; shops, refreshment stands, ice cream and beverages; children's playgrounds; observation deck; sculptures and monuments, as well as some of the city's attractions, car and Bicycle Parking.

The promenade along Platja Gran beach is the longest stretch of promenade. Read more about the beach Gran... 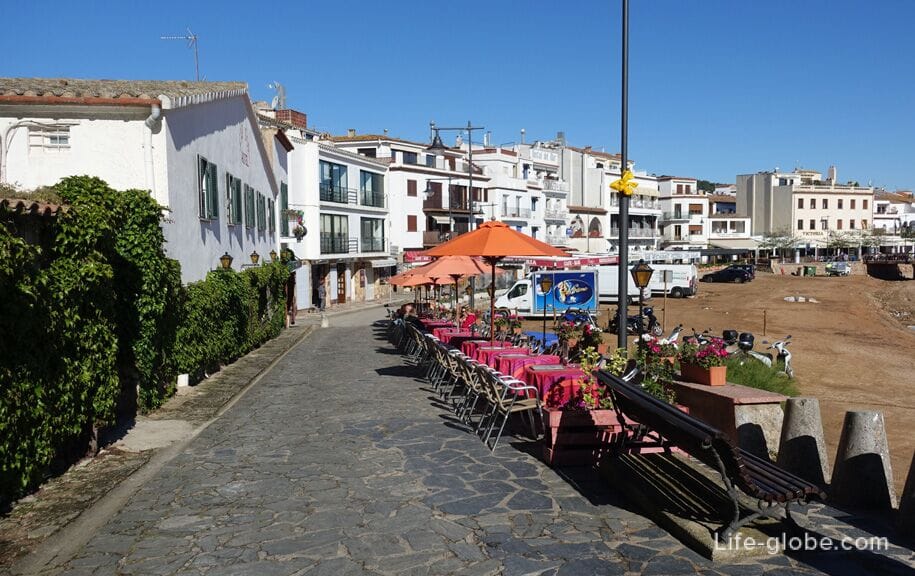 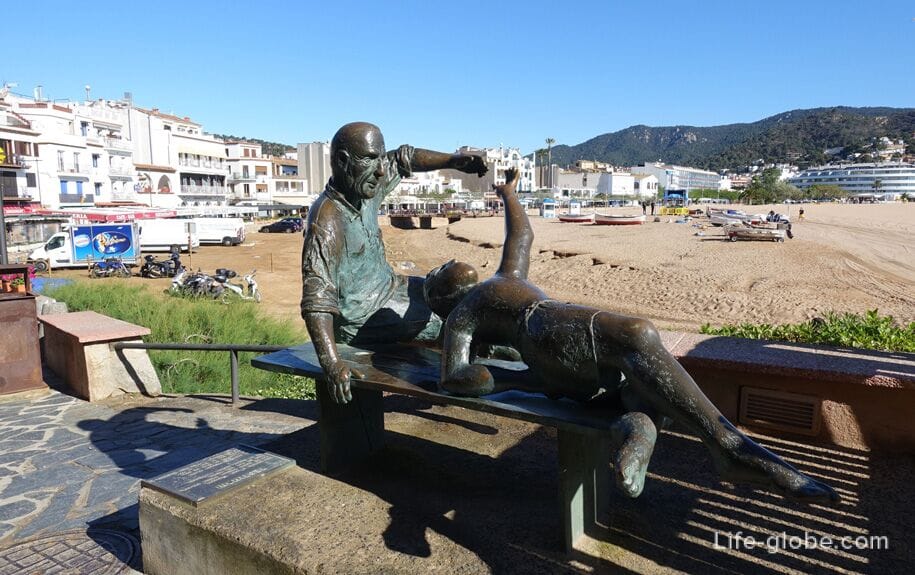 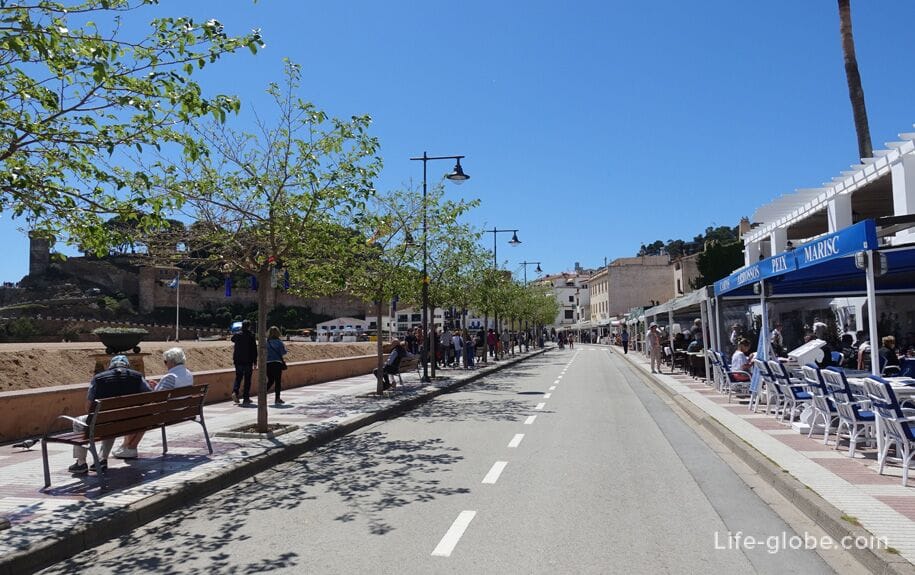 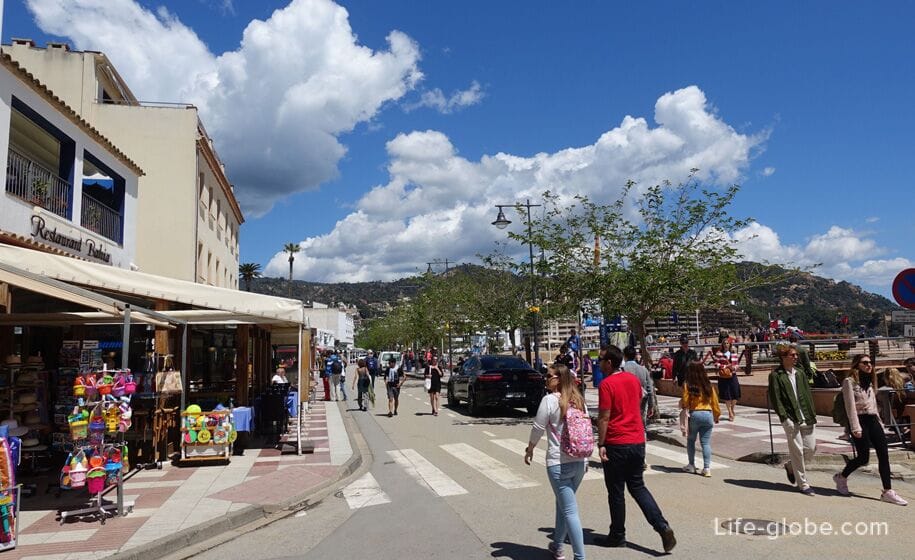 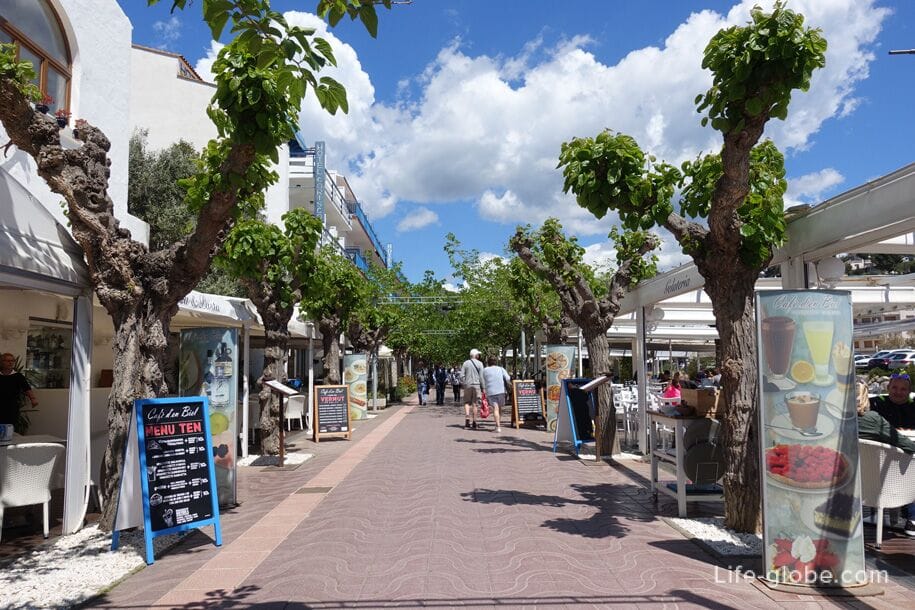 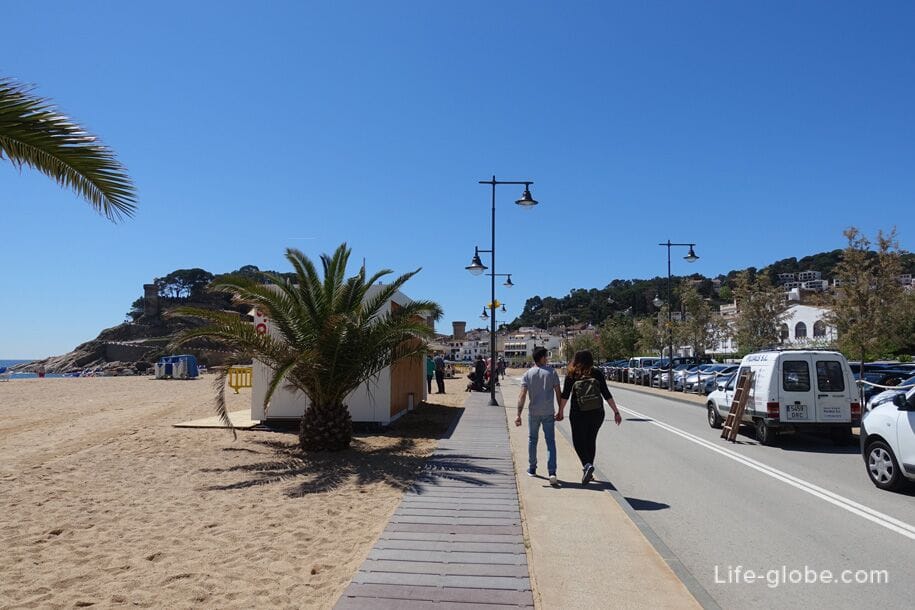 Attraction in this part of the promenade stands a historic building, overlooking the promenade - home of sans (Sans Casa More). The second façade of the house overlooks the square of Spain (Plaça Espanya, 6).

The monument has more than 100-year history. He was commissioned by Joan sans in 1906 and designed by architect and modernist Antoni de Falguera.

In 1930 the house sans became the property of the family of Vilallonga.

The uniqueness of the building aesthetic is eclectic. The architecture is a perfect combination of modernist elements with the influence of colonial architecture. During the history of the building facades were changed, although some original features still remained.

Now the walls of the building is a 4-star hotel Diana features a terrace with sea views, free Wi-Fi, rooms with air conditioning and heating. In some room rates includes: Breakfast or Breakfast and dinner. 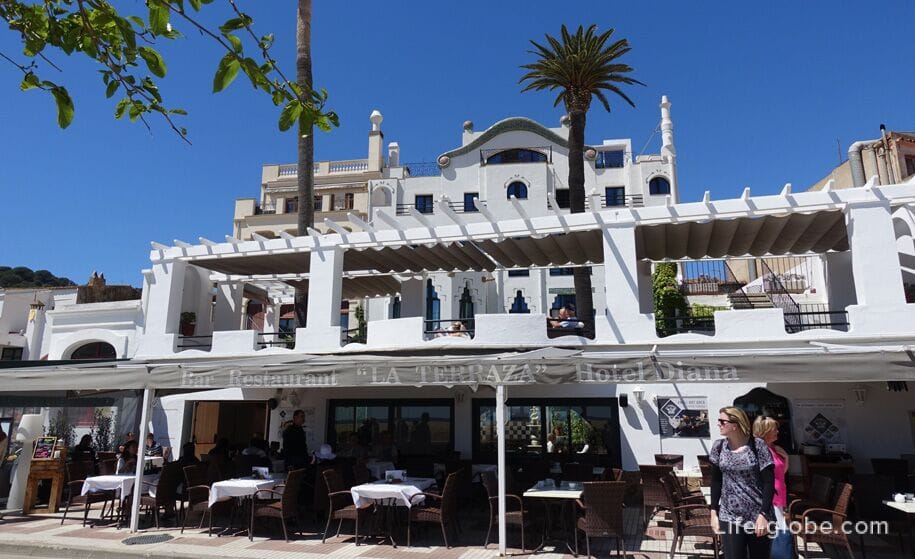 In the Eastern part of the promenade along the Platja Gran beach, near the ring, there are: tourist information centre, Park with children's Playground and Parking (rent a car in Spain...) also stop here on a tourist train where you can explore Tossa de Mar. The journey is 45 minutes. Ticket price 6€, concessions 3.50 Euros. 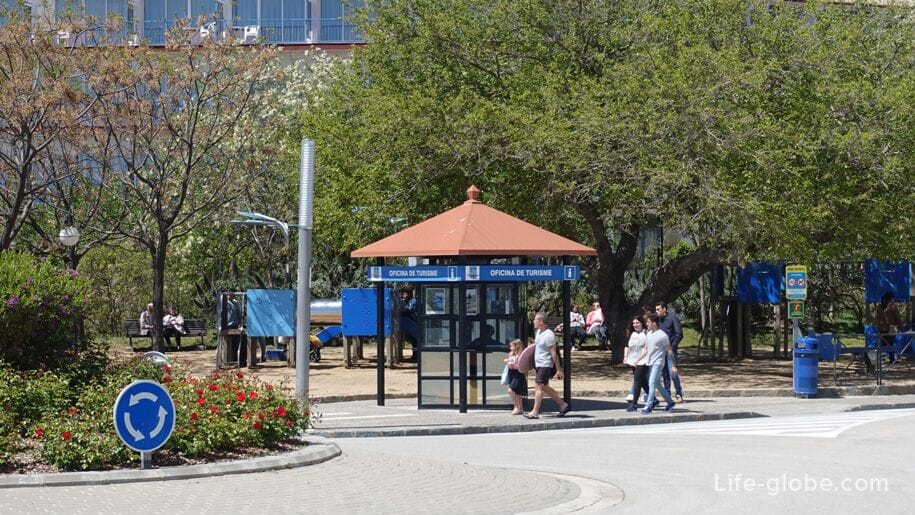 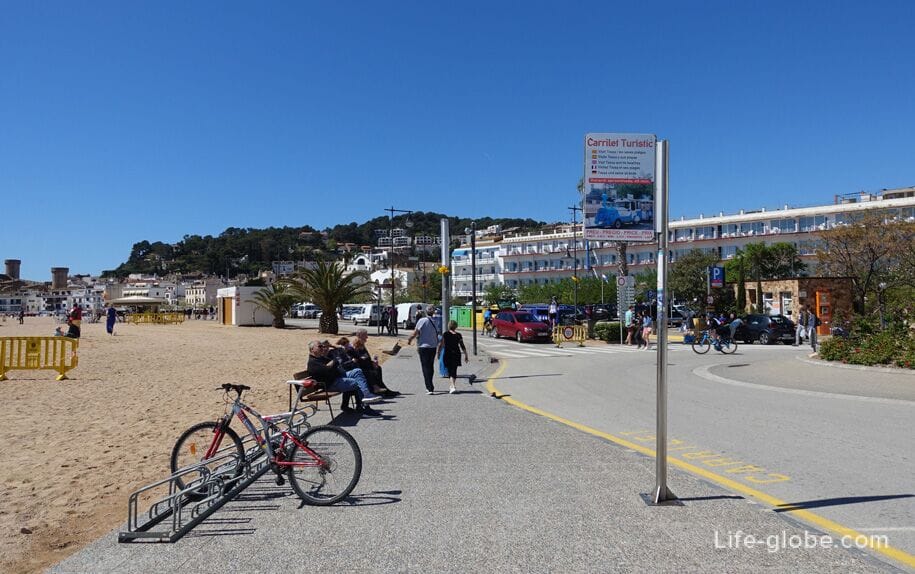 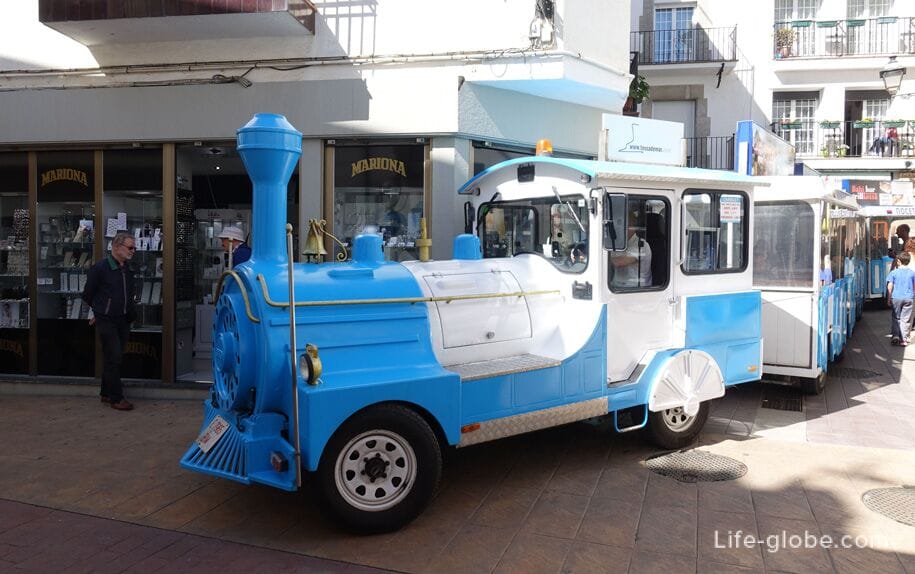 The stretch of promenade along the rocky beach Ray.

In this part of the promenade is an observation deck with panoramic views of the beaches of Gran and Menu and sea water. 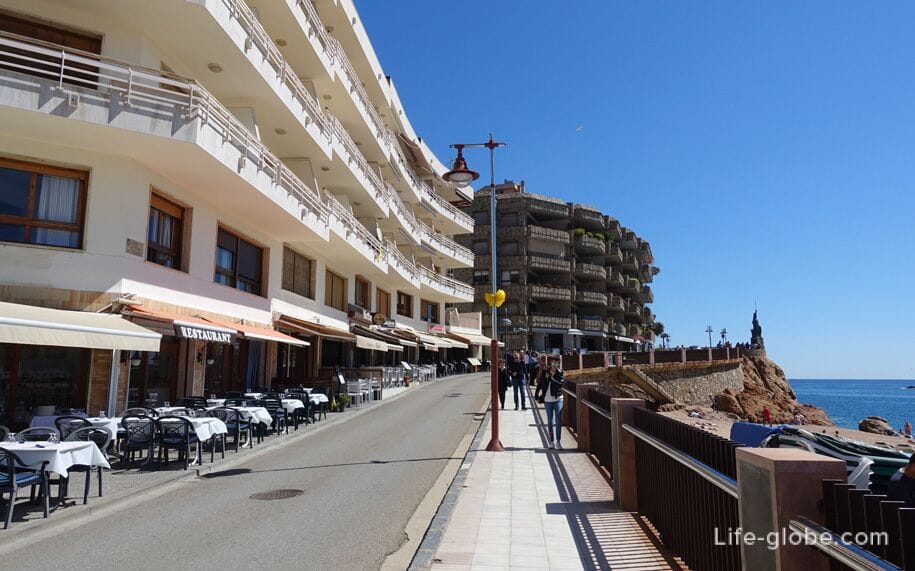 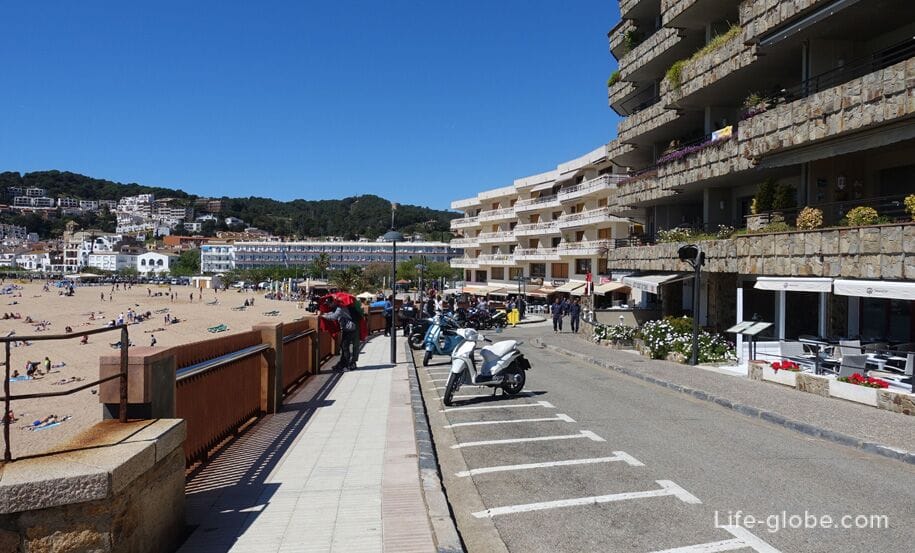 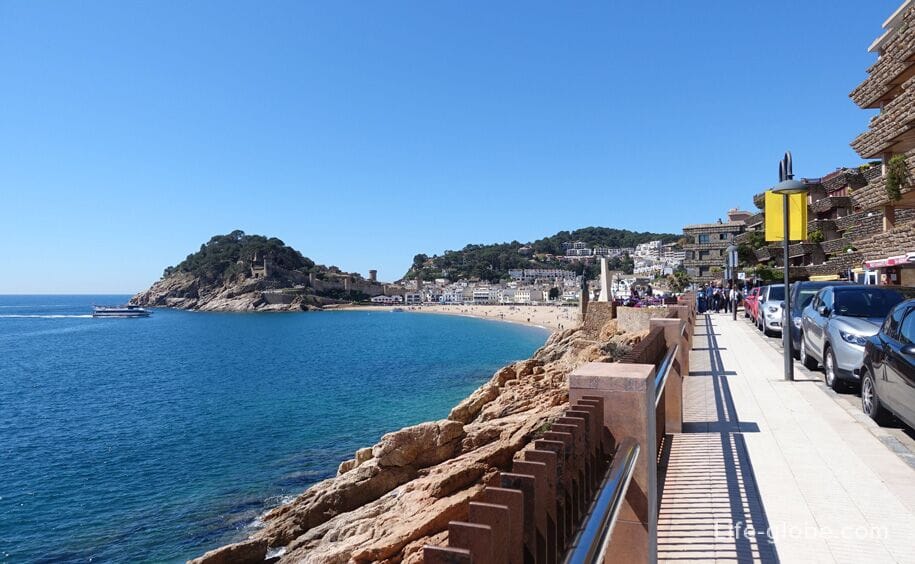 A bronze statue dedicated to the Roman goddess of war and wisdom, Minerva (Estatua de Minerva), located on one of the viewing platforms.

The statue is depicted with his usual attributes - spear, shield and helmet, and her eyes turned to the coast. This late work of Frederic Mares (1974). 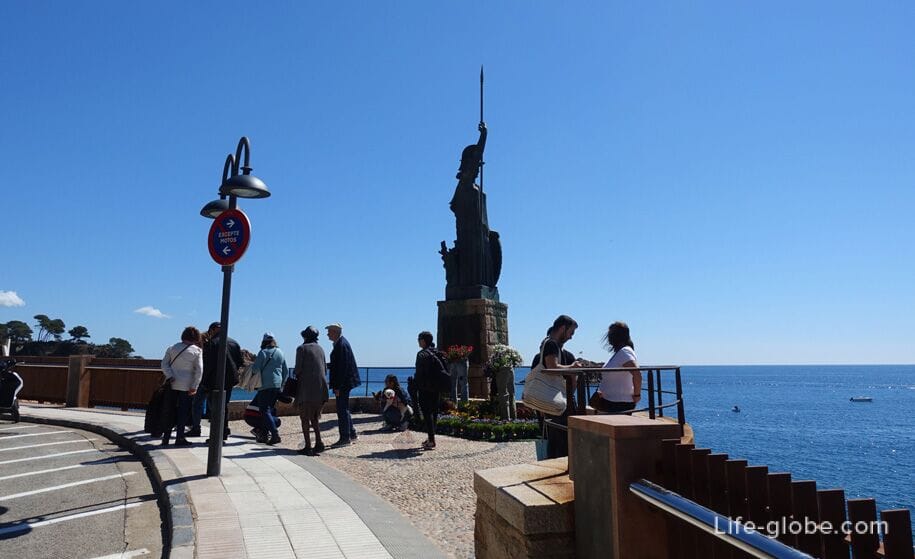 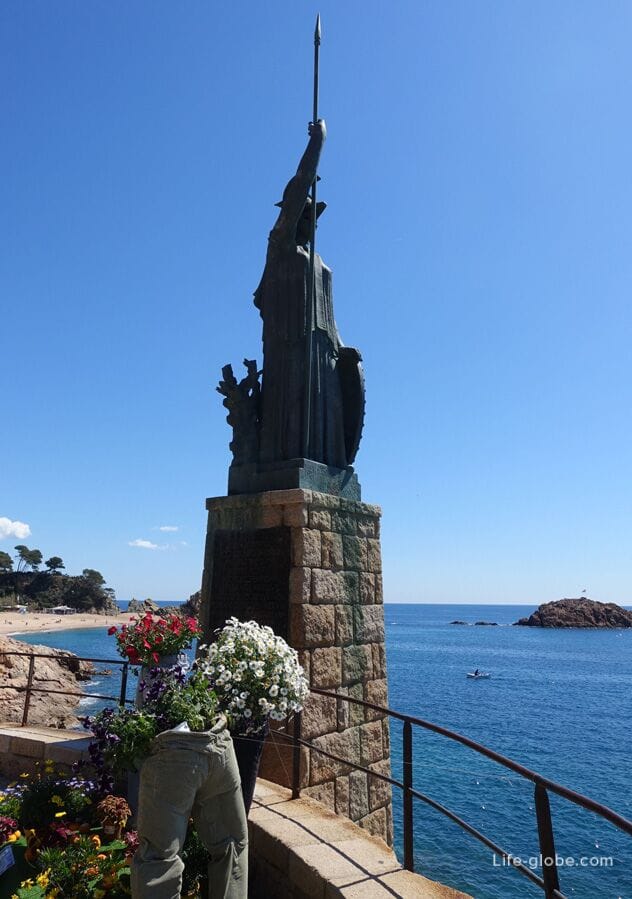 The house-hopper (Búnquer) - a house known as the Hopper, since it has the unusual buildings of the Spanish coast appearance. The architecture of the houses you can see elements reminiscent of the sanctuary, clearly visible in the outer finishing of balconies-terraces.

Houses with similar architecture along this part of the embankment several. On the first floor of the buildings are cafes, restaurants and a pizzeria.

In the house-hopper, you can rent this apartment Lets Holidays Tossa de Mar Palma Sa with a seasonal shared pool and sun terrace. 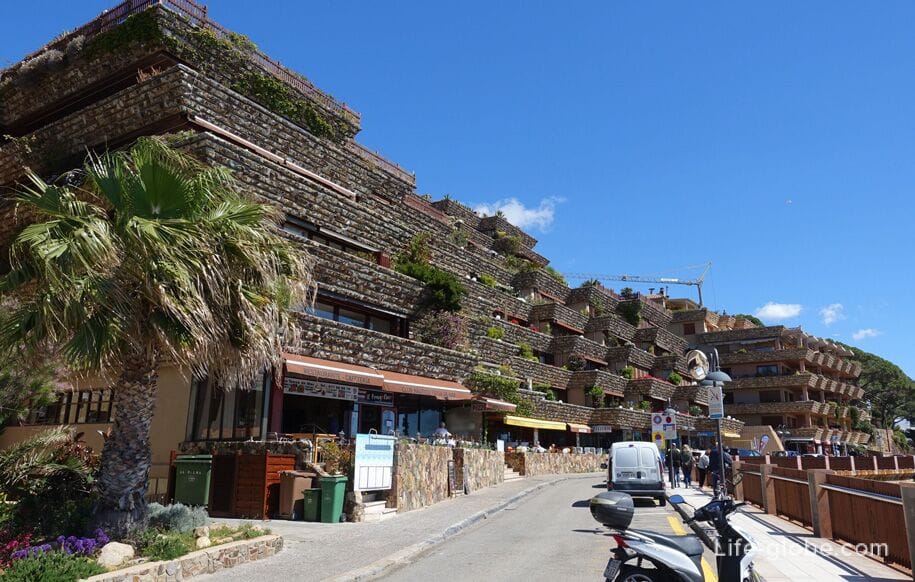 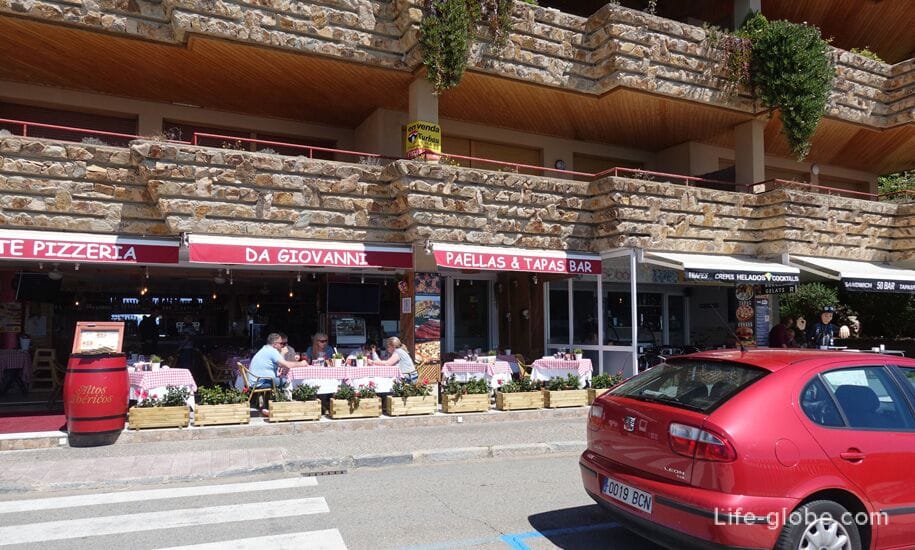 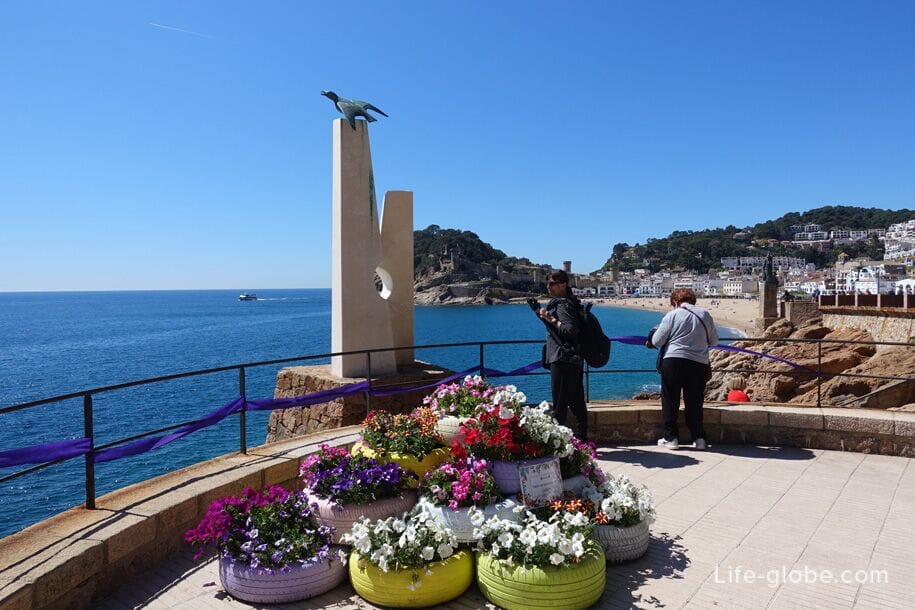 The stretch of promenade along the beach of the Mar Menuda. Read more about the beach Menuda...

Near the waterfront there are: Playground, restaurant and a diving center. 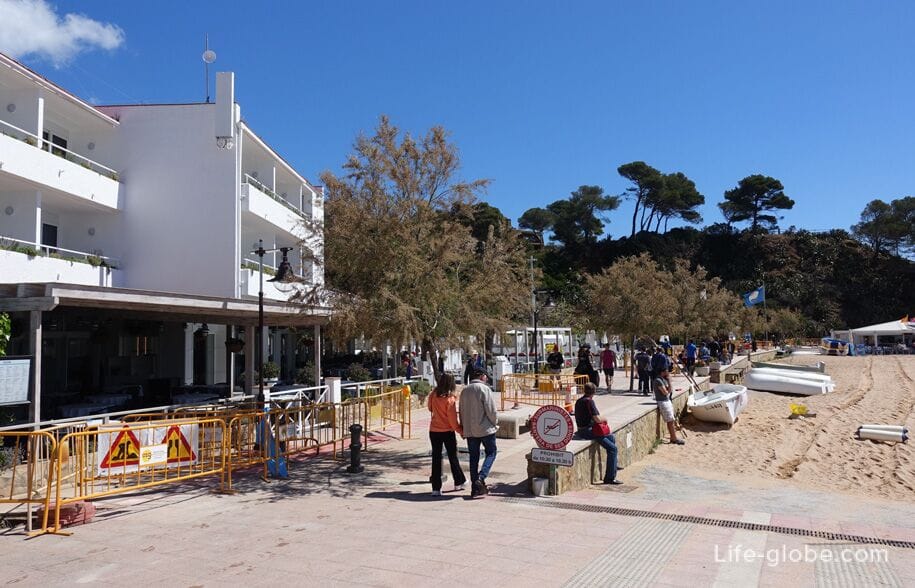 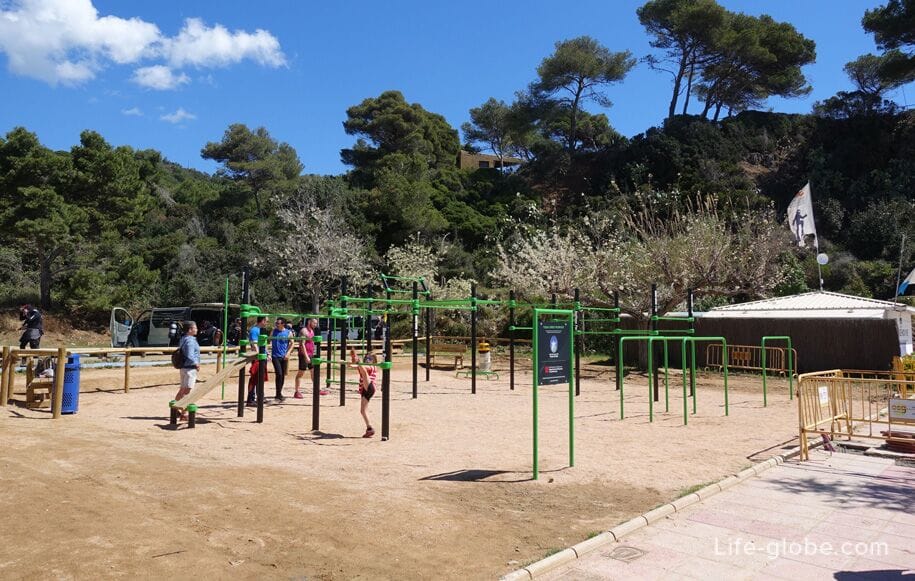 Near the waterfront offers 4-star Golden Mar Menuda. This is the only hotel in the centre of Tossa de Mar with direct access to the beach.

In hotel: the pool and sun terrace with direct beach access, free Wi-Fi, a bar and a restaurant. The room price includes: Breakfast or Breakfast and dinner. 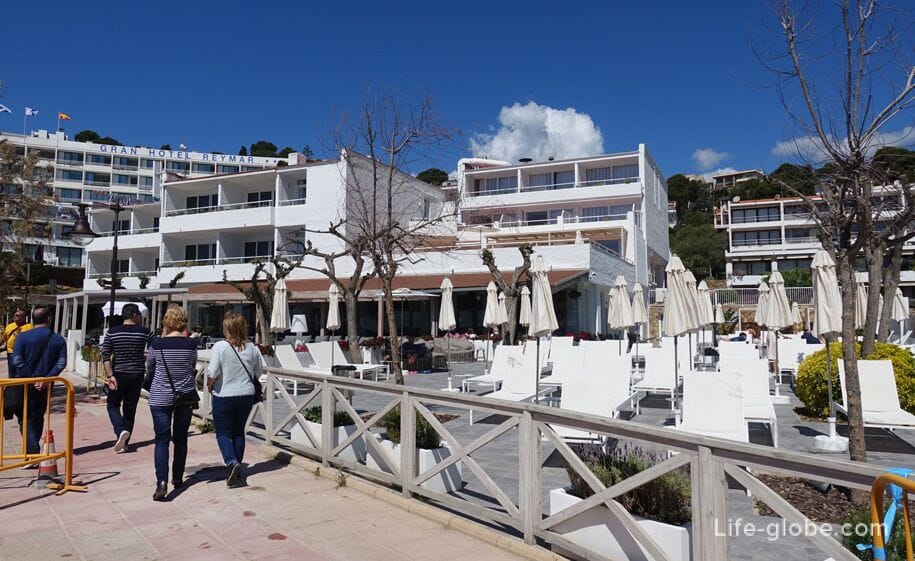 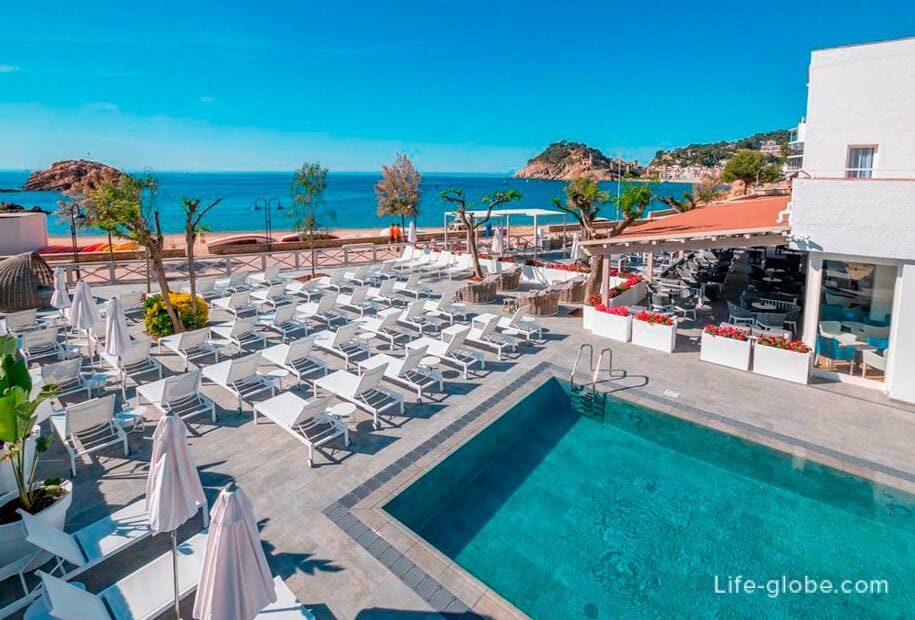 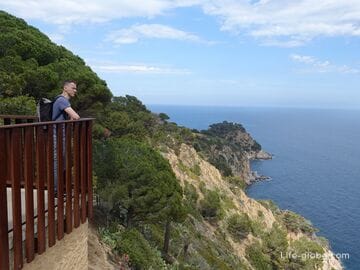 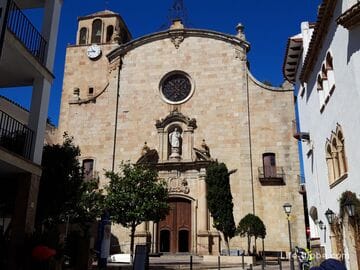 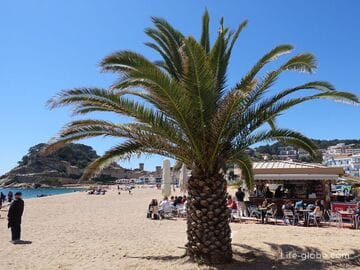