Istanbul is a huge metropolis with a well-developed public transport network.

By public transport in Istanbul, you can get to anywhere in the city, including from /to airports: the New Airport and Sabiha Gokcen Airport. Flights to Istanbul →

Istanbul's public transport includes a bus network, dolmushi minibuses, trams, including high-speed ones, the Marmaray tunnel running under the Bosphorus, ferries along the Bosphorus Strait and the Golden Horn Bay, funiculars and cable cars.

The public bus network in Istanbul is the most developed and one of the most popular public transport networks in the city.

The public bus network includes both the usual buses and metrobus, as well as dolmushi.

Metrobus (Metrobüs Istanbul) is a type of rapid bus transport that has dedicated bus lanes almost the entire length of the route. The bus line is about 50 km long. (31 miles) and 45 stops with one lane in each direction. The route of the Metrobus has lines No. 34 and No. 34-with letters, laid from the Beylikdüzü Sondurak stop to the Sogutluçeşme stop (Söğütlüçeşme).

All routes of public buses in Istanbul, including Metrobus, and the conditions of travel, as well as the fare and payment terms can be specified on the official website: iett.istanbul. 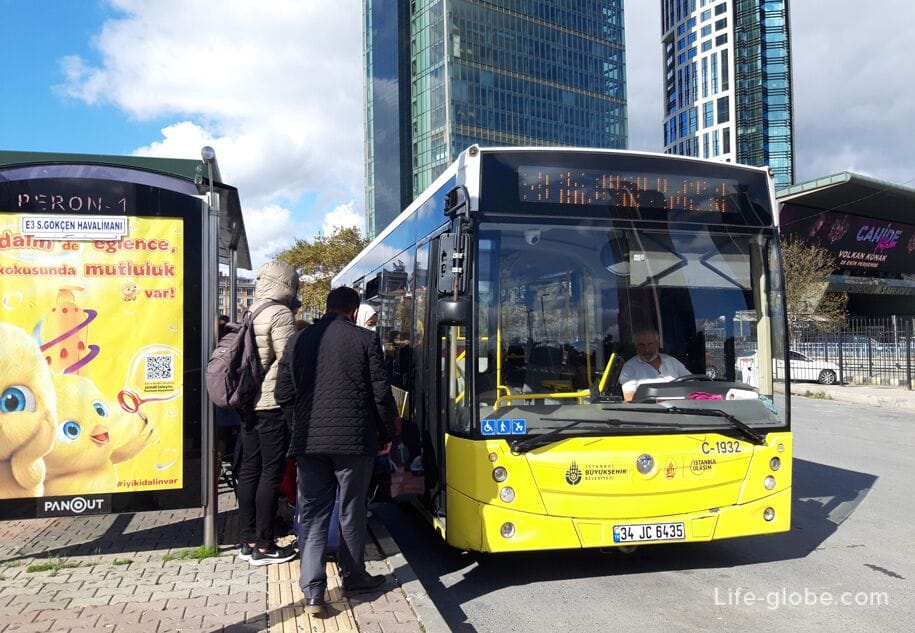 There are also Hop-On Hop-Off tour buses running around Istanbul, where you can visit some of the main sights and museums of the city.

Tickets for the Istanbul sightseeing bus can be purchased here →

The metro in Istanbul is divided into branches, each of which is painted in its own color on the maps.

There are lines and night metro.

The Istanbul metro is constantly evolving, so new metro lines may appear.

The Istanbul metro line M11 runs from the New Istanbul Airport. The website of the company that serves the M11 metro line: tcddtasimacilik.gov.tr.

Trams in Istanbul, including historical ones

Tram routes, schedules, stops, tickets and fares may change, so we recommend that you check the information on the official website (Istanbul trams are part of the metro - a single website): metro.istanbul. 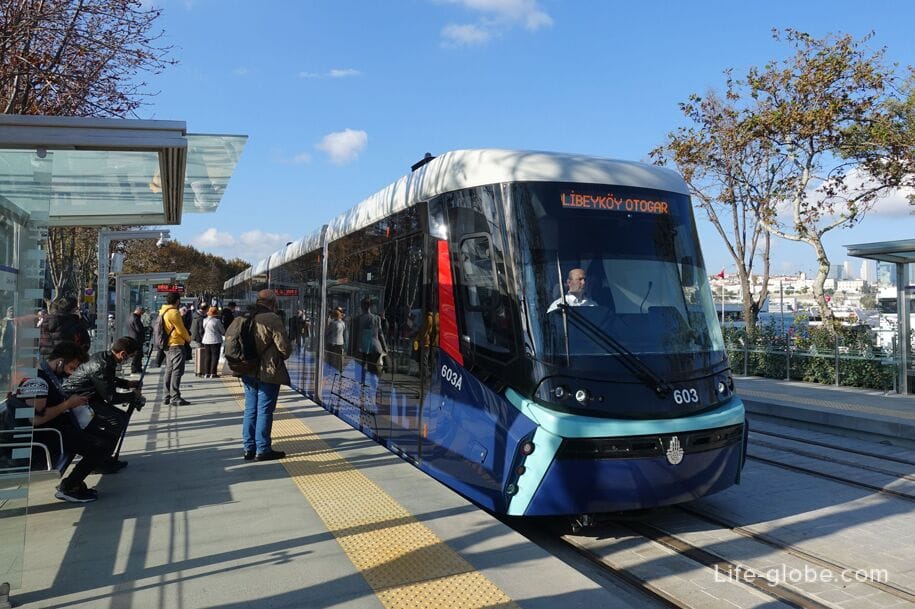 There are two historic tram lines running in Istanbul.

1. The most famous is the line of the historical red retro tram "Nostalgic" or "Nostalgia" (Nostalgia Tramway). 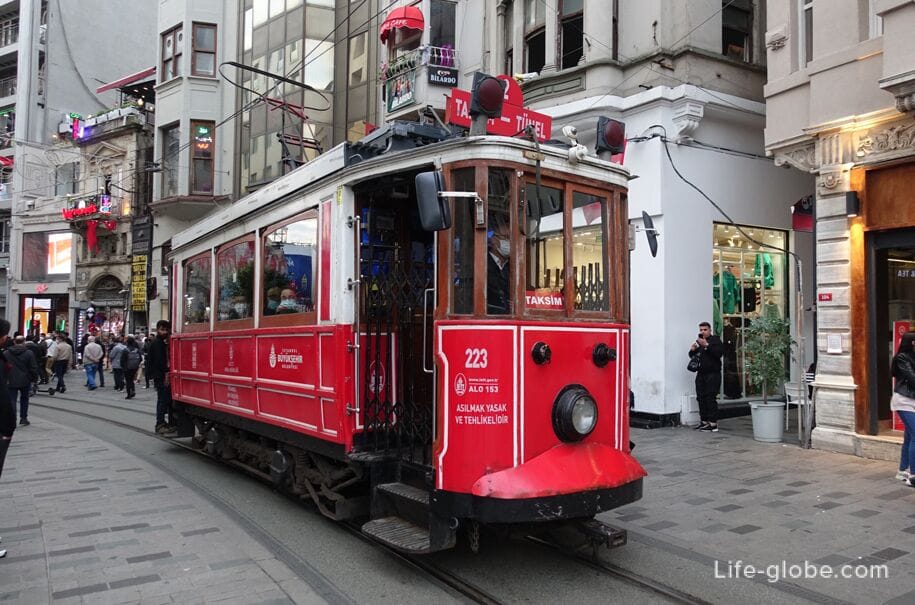 2. The second line of the historic tram is not so much in demand, and not so interesting. It runs through the Asian part of Istanbul.

The tram runs clockwise around the ring from Kadikoy Pier to the Fashion district.

The line has a length of 2.6 kilometers and has several stops.

There are several red cars from the 1960s from Germany on the route. 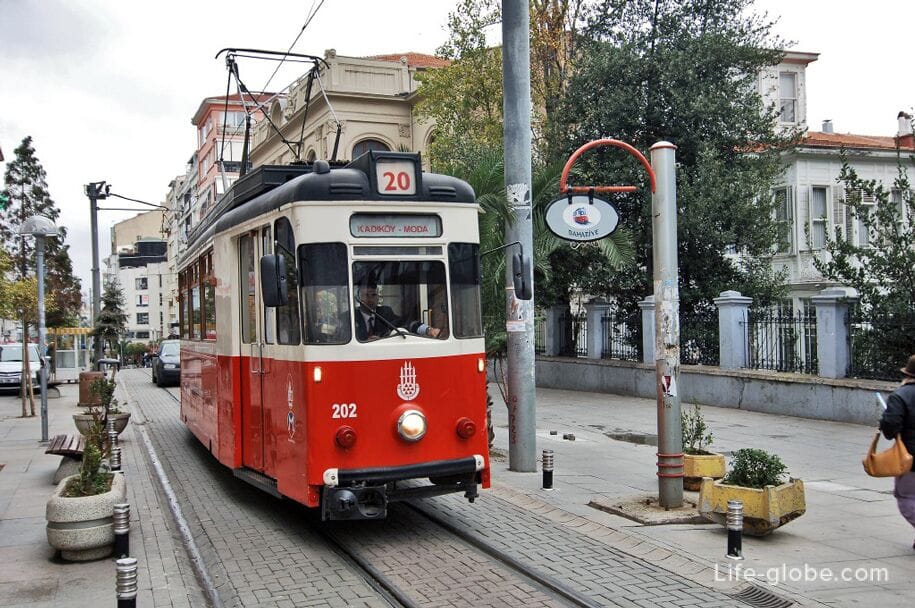 Marmaray is a commuter train line, also called one of the metro branches, because part of Marmaray is similar to the metro, and part is like a modern tram.

The peculiarity of Marmaray is that it is a tunnel that connects the two shores of Istanbul, where part of the metrotunnel runs under water, and part is aboveground.

There are four funiculars in Istanbul.

Information about the F1 funicular line can be found on the Istanbul Metro website: metro.istanbul.

This is the funicular "Tunel" (Tunel) - an underground funicular, which is the public transport of the city and one of the oldest currently operating funiculars of its kind.

The upper station of the funicular is called Beyoglu (Beyoğlu) and is located at the end of Istiklal Street, and the lower one is Karakoy (Karaköy) and is located near Galata Bridge. Learn more about the Tunel funicular... 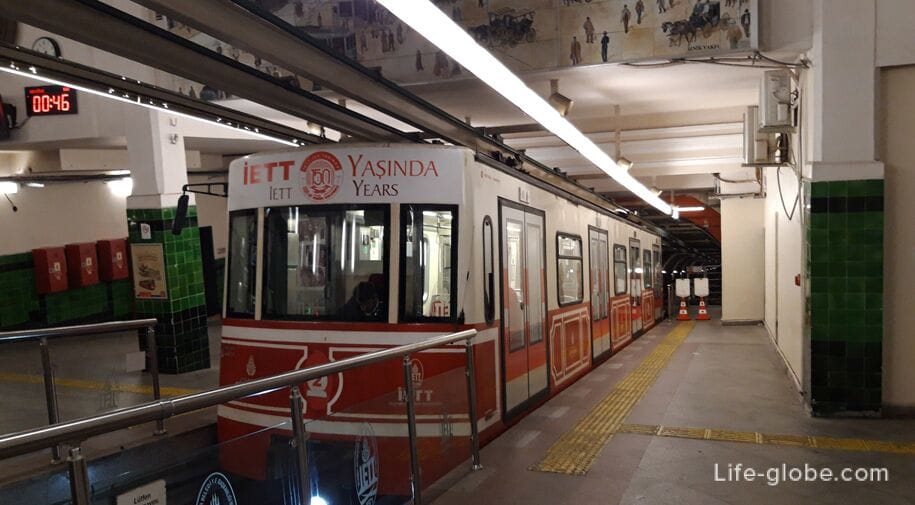 3. Line F4 Bokaray University-Ashiyan (University / Hisarustu - Asiyan), which stretches between the Rumeli Hisar district and Ashyan Park, located on the banks of the Bosphorus. The line facilitates access between the Bosphorus coast and the M6 metro line (station "Boğaziçi Üniversitesi - Hisarüstü").

Information about the F4 funicular line can be found on the Istanbul Metro website: metro.istanbul.

Due to the fact that the F3 funicular line runs along a concrete viaduct, it is positioned as a monorail, although technically it is a funicular.

This is a private funicular line: vadistanbul.com/havaray.

There are two cable cars operating in Istanbul.

1. Gondola cable car of the TF2 line "Eyüp-Pierre Loti" (Eyüp-Piyer Loti Teleferik Hatt), on which you can climb the Pierre Loti hill, where there are: the observation deck and the famous panoramic cafe. 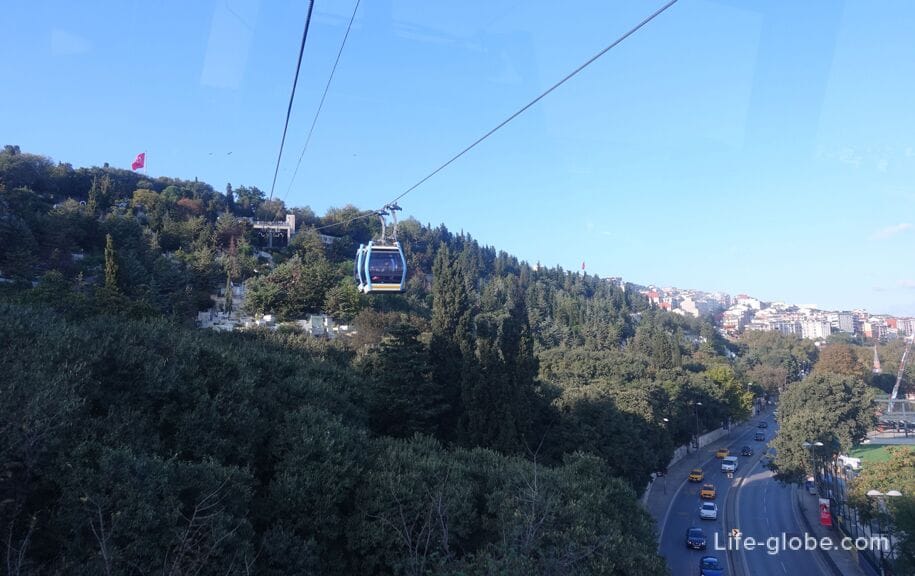 2. The cable car of the TF1 line "Maçka-Taşkışla", which stretches from the metro station of Taşkışla, located in Beyoglu district, up to of the park Makcha.

!!! Both cable cars belong to the Istanbul metro. Website: metro.istanbul.

One of the public transports and perhaps the most interesting in Istanbul are ferries that ply the Golden Horn Bay and the Bosphorus Strait. 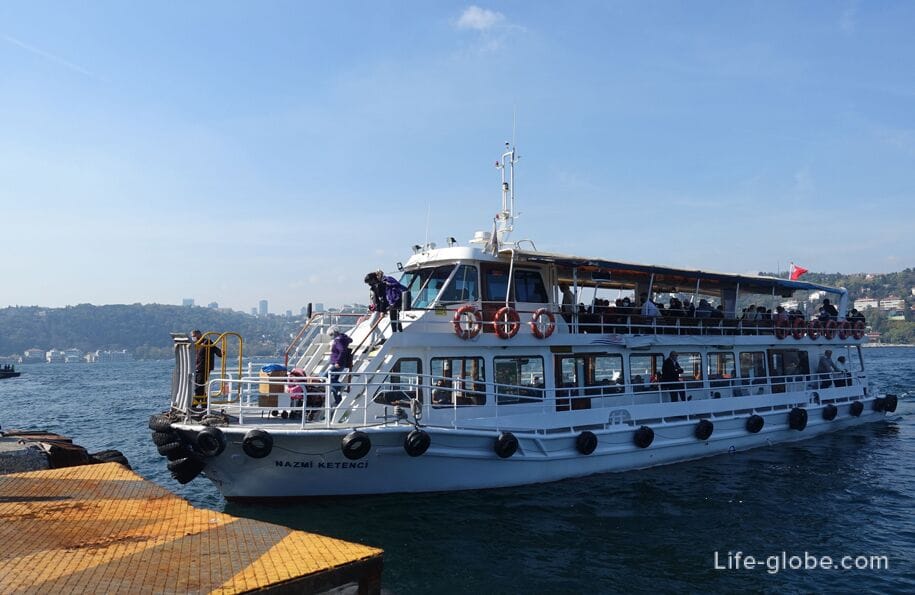 In addition to ferries, you can walk along the waters of the Bosphorus and the Golden Horn with one of the excursions around Istanbul, both group cruises and individual

In all public transport in Istanbul, with the exception of minibuses (cash payment) and a number of routes, electronic tickets from 1 to several trips and Istanbul kart transport cards are valid.

Jetonmatik tokens are also in use. You can buy tokens in vending machines that have the inscription "Jetonmatik". Tokens are not a universal payment system and are not suitable for paying for buses and in Marmaray.

You can buy tickets for 1 and several trips, as well as transport cards of Istanbul (the card itself costs money) at vending machines installed near many bus stops in the city, including near stops at airports, near ferry piers, as well as at funicular and metro stations.

When traveling by public transport, it is most profitable to use the Istanbul transport card, which is the most convenient and universal. According to the transport card, the fare is lower than for tickets and tokens (a token is the most expensive way to travel). Also, if you make a transfer (transfers) within 2 hours, then each next train will be lower in cost than the previous one. 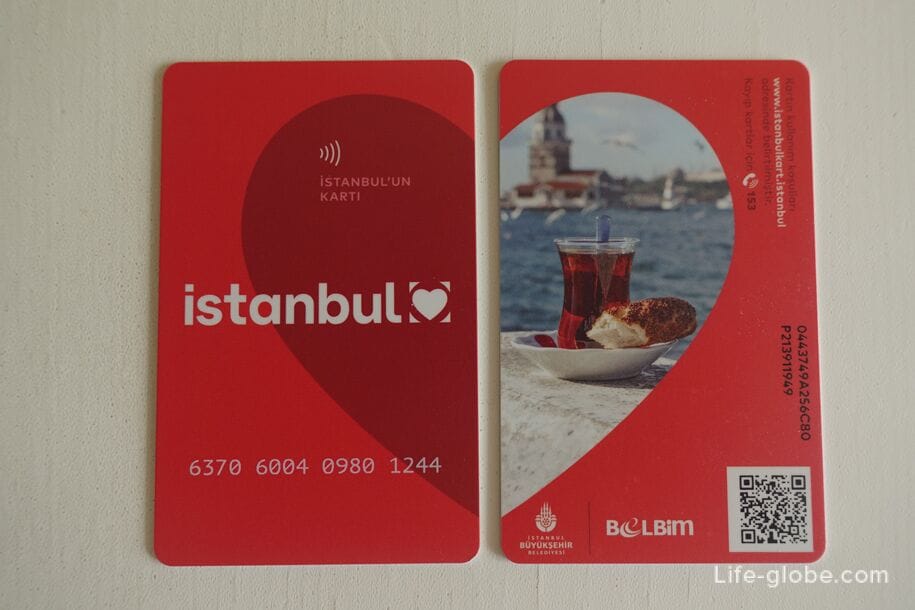 Card payments are made at the entrance to buses, at metro stations, funiculars, cable cars, Marmaray, ferry piers and tram stops. Funds are debited from the card automatically. Tokens are thrown into a special nest of turnstiles of trams and subways.

You can also replenish transport cards in vending machines. 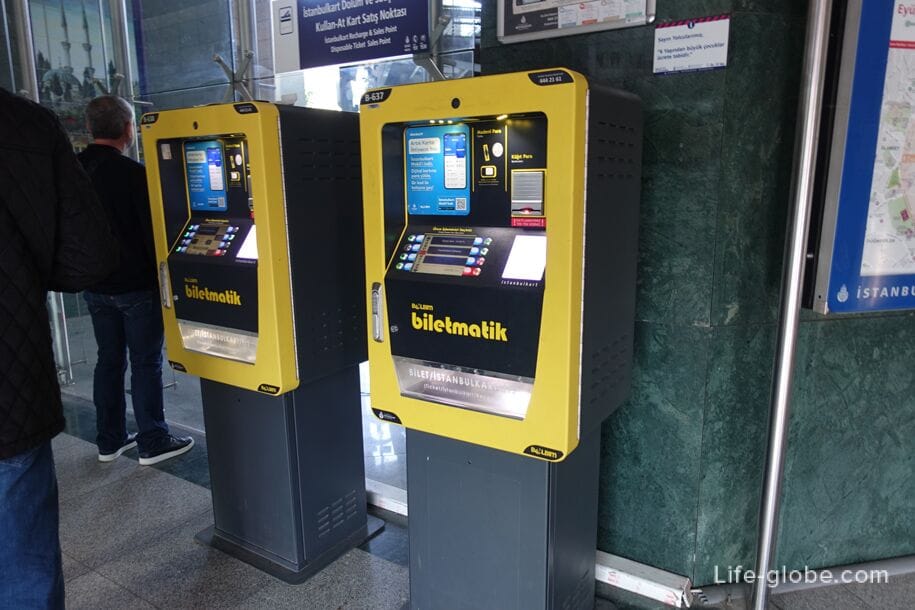 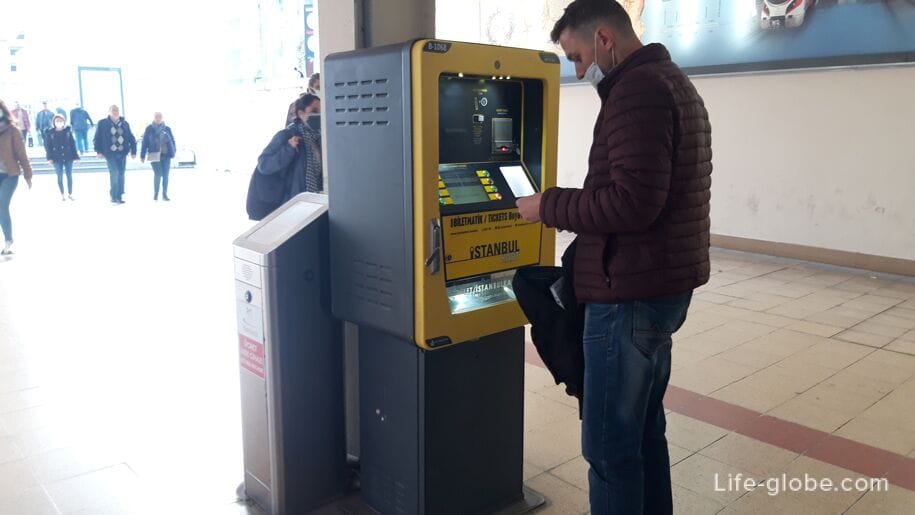 In the case of Marmaray, at the entrance to the station, the full fare is deducted from the card - to the final station. If you exit earlier than the final stop, then small devices are placed at the exit of the station, to which you should attach a card, and the unspent funds will be returned back to the card. The fare will depend on the number of stops (stations) that you have passed. 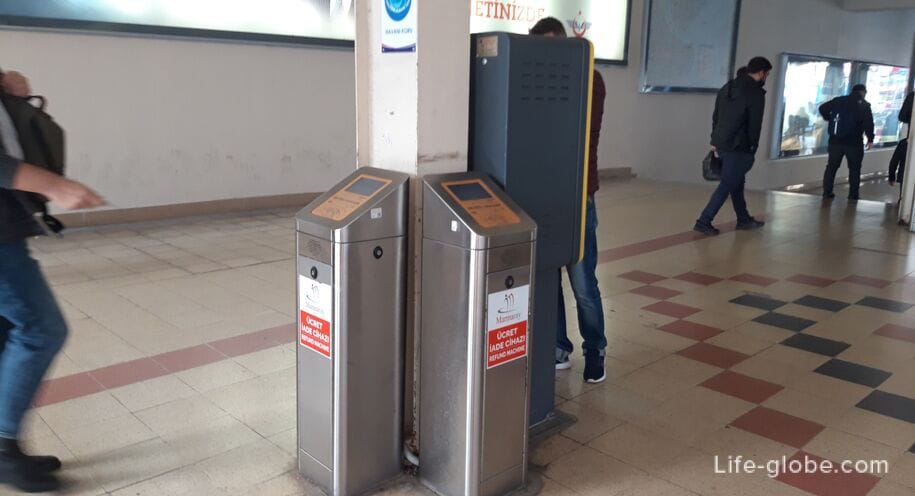 For children under 6 years old, public transport in Istanbul is free.

Alternatively, the Istanbul City Card tourist transport card is also valid in public transport in Istanbul, which gives the right to unlimited travel in all types of public transport in Istanbul, except for minibuses, in which the fare is paid in cash to the driver. The cost of the card is fixed (starts from 35 euros) and depends on the number of days for which you purchase it - there are cards for 1, 3, 5, 7 and 15 days. You do not need to replenish the card, it gives an unlimited number of trips for a selected number of days. You cannot transfer the card, that is, one card can be used by one person. The card can be purchased online and delivered to your hotel.

As an alternative to public transport, when traveling around Istanbul, including traveling from / to airports and when leaving the city, you can use taxi (transfer) services or rent a car.

Rent a car in Istanbul (all places, including airports) →

You can also travel outside the city of Istanbul by bus. Buses to and from Istanbul →

You can also travel outside Istanbul for 1 or more days with excursions, both group and individual

Museum and tourist maps of Istanbul

Some palaces, museums and sites in Istanbul have museum and tourist maps.

There are different types of maps in Istanbul. Some of which give the right to visit certain museums, while others, in addition to the main museums, include excursions, as well as some shows and entertainment, public transport rides and discounts on airport transfers.

The classic and most common is the museum card "Museum Pass Istanbul" (Museum Pass Istanbul), which gives the right to enter some museums of the city. There are also more extended Istanbul E-Pass and Istanbul Tourist Pass cards, which give the right to visit museums, attractions, guided tours, an aquarium, shows, cruises along the Bosphorus, trips outside the city, etc. Learn more about museum and tourist maps of Istanbul... 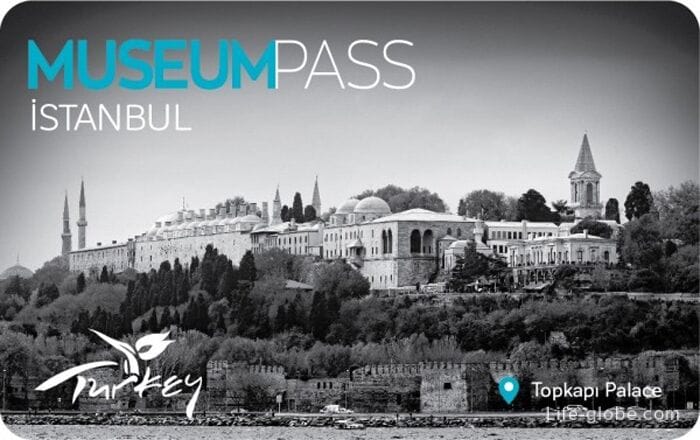 All accommodation facilities in Istanbul (hotels, apartments, houses, etc.), including in the historical center, in the European and Asian parts of the city, can be viewed and booked here 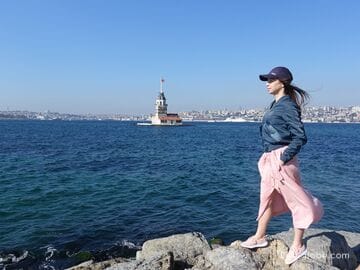 Istanbul itineraries, on your own: what ... 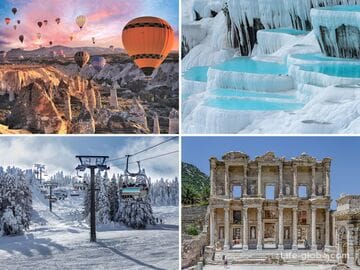 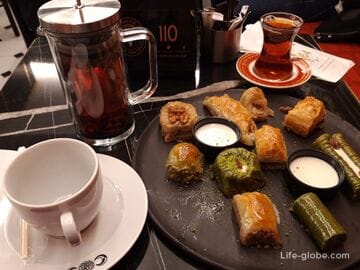