Bronze Horseman - a monument to Peter I in Saint Petersburg

The Bronze Horseman is one of the most famous monuments in St. Petersburg.

The monument was created on the initiative of Catherine II, who wanted to honor the memory of Peter the Great.

The equestrian statue of Peter was made by the French sculptor Etienne Maurice Falcone, who specially for this work, in October 1766, came to St. Petersburg from Paris. A workshop for the sculptor was arranged in the former Throne Room of the Winter Palace Elizabeth Petrovna. The stone building of the former stables at the palace was adapted for the immediate residence of Falcone.

Together with Falcone on the creation of the monumental statue worked: his student Marie Anne Collot, who created the head of the monument to the emperor; E. E. Khaylov, who cast the statue; and architect Yuri Felten, who carried out the overall management of the process.

The pedestal of the monument, the so-called "Thunder-stone" was found and brought from the vicinity of the village of Konnaya Lakhta. After this huge monolith was removed from the ground, and the pit was eventually filled with water, a reservoir was formed that has survived to this day - this is Petrovsky Pond.

For the transportation of the stone, the winter months were chosen, when the soil was frozen and could withstand the weight. The transportation lasted from mid-November 1769 to the end of March 1770. The stone was delivered to the shore of the Gulf of Finland, where a special pier was built for its loading.

Falcone significantly reduced the size of the stone, thereby giving the boulder the shape of a wave crest.

Today, this huge, majestic equestrian monument to Peter the Great adorns the center of St. Petersburg, is one of the symbols and attractions of the city. 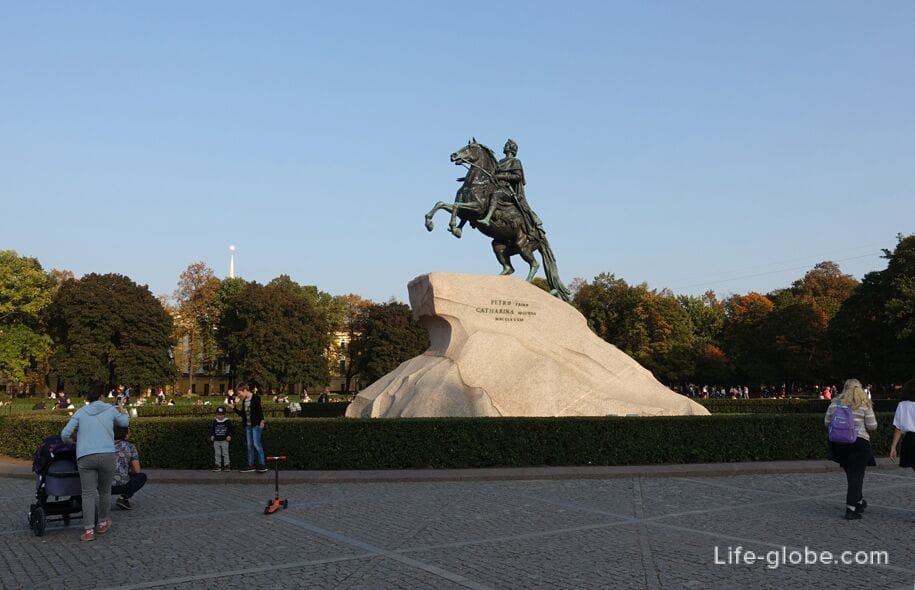 The monument is made of bronze and is a sculptural composition, which depicts Tsar Peter I, sitting on a rearing horse.

Falcone presented the king as the creator, legislator and benefactor of his country, who stretches out his right hand over the country he is traveling around. In the expression of the statue of the emperor, Falcone wanted to express a reflection of thought and power. The head of Peter I is crowned with a laurel wreath, representing the resistance of the elements and the assertion of the sovereign will.

Instead of a saddle, the king sits on the back of a steed on a bearskin, which symbolizes the nation civilized by the sovereign. 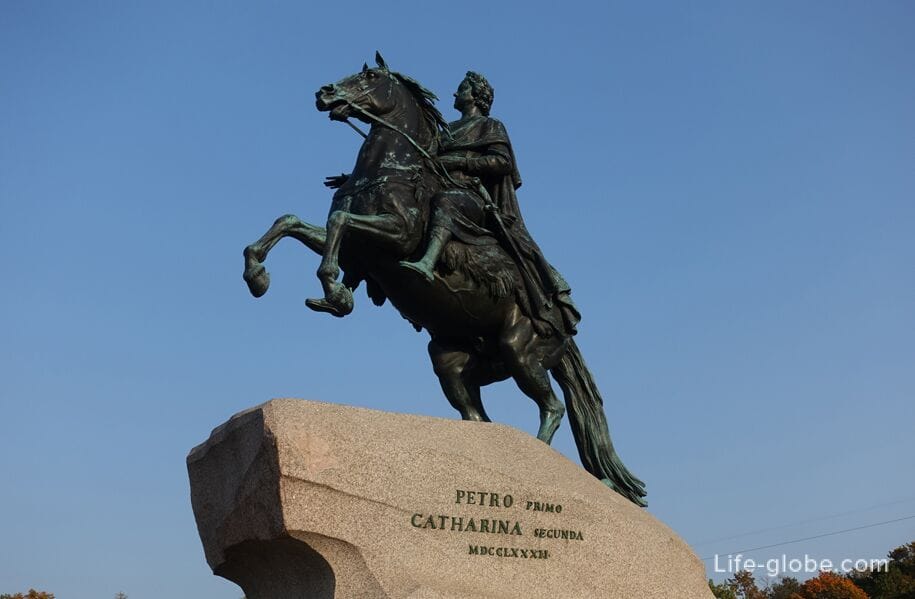 In the sculptural composition there is a snake, which the horse mercilessly crushes with its right hind hoof. This snake was a solution to the problem of ensuring the static stability of the monument. At the same time, it seems to hint at the ease with which the Russian tsar melts with difficulties and detractors.

The snake was sculpted by the Russian sculptor F. G. Gordeev. 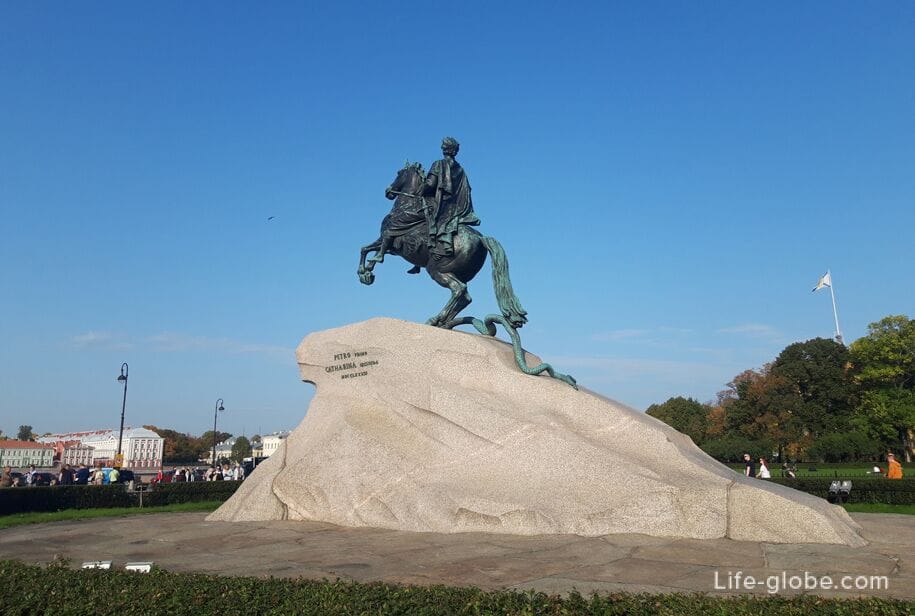 The entire sculptural composition stands on a huge pedestal made of solid stone.

On both sides of the pedestal is an inscription in two languages "Petro primo Catharina secunda" and "To Peter the Great Catherine the Second". 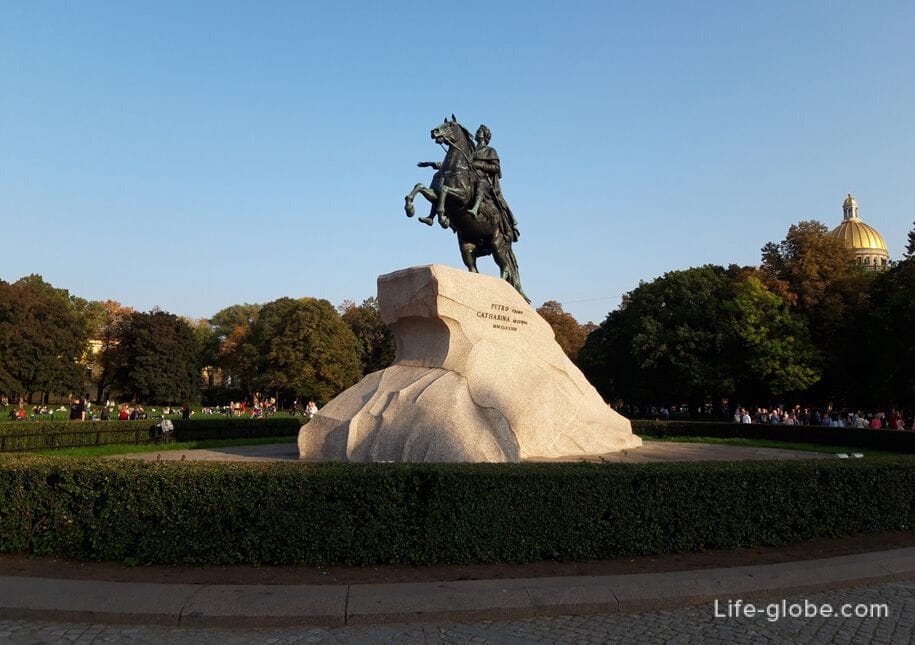 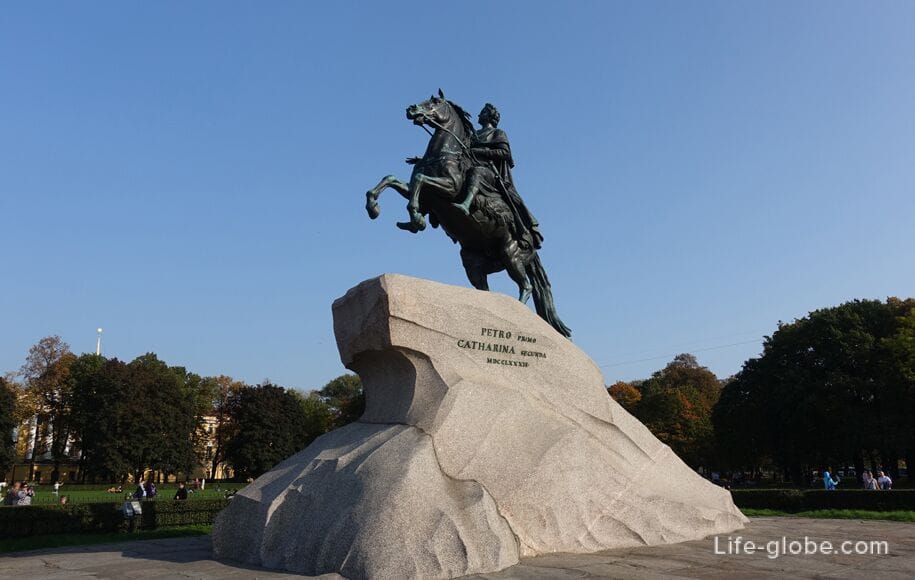 The monument "The Bronze Horseman" is located near the Admiralteiskaya Embankment of the Neva River, on the Senate Square and is visually inextricably linked with Alexander Garden, complementing both the garden itself and the Neva embankment. 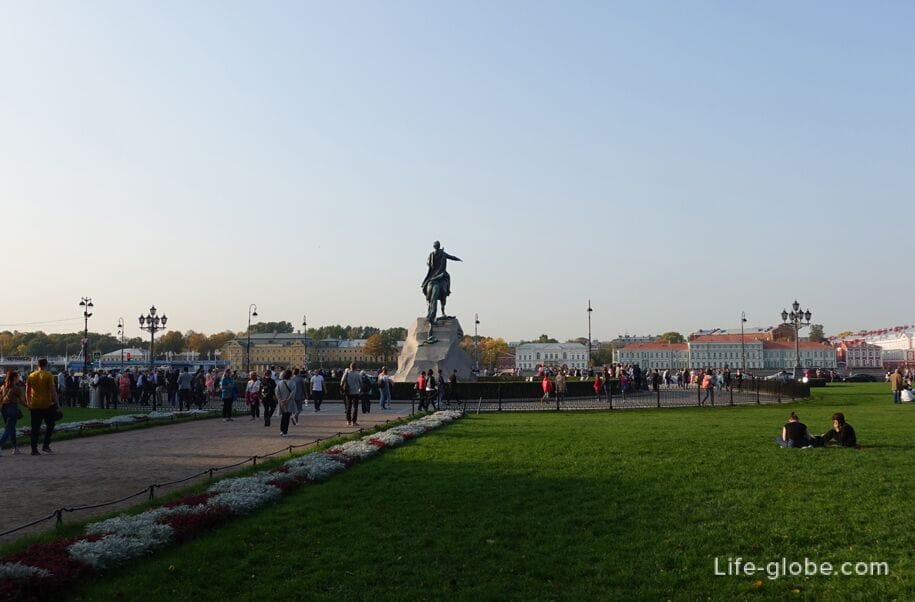 The monument to Peter I occupies an important place among the architecture of St. Petersburg. It is surrounded by significant buildings of the city: to the west of the monument are the buildings of the Senate and the Synod, to the east - Admiralty, and from the south - St. Isaac's Cathedral with an observation deck.

The Bronze Horseman monument is part of the European route through St. Petersburg and represents France.

All accommodation facilities in St. Petersburg, including in the city center and near the "Copper Horseman", can be viewed and booked here 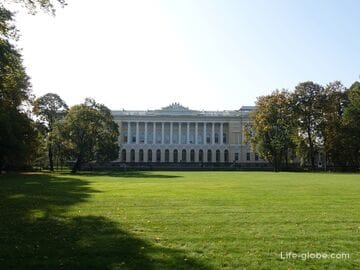