Beer gardens in Munich (with photos, addresses and websites)

Beer garden (Biergarten) - a type of beer restaurant (part of a beer restaurant) in which guests sit outdoors, under shady trees and have the right to bring their own food.

In a broader sense, the "beer garden" is also used for outdoor restaurants.

In Munich, beer gardens operate in restaurants, in which there is also a hall, more often several halls, in which, like in a beer garden, you can sit down and taste all the same beers and dishes.

In Munich, there are many restaurants and pubs that have beer gardens, from small ones-for a few tables, to those in which the number of seats reaches several thousand.

This article lists the largest and(or) most popular beer gardens in Munich where you can enjoy a frothy drink.

In beer gardens: long wooden slots for 6-10 people with wooden benches on both sides of the tables, sun umbrellas, canopies, terraces and places to hide in bad weather, playgrounds, stages, music, entertainment, etc.

The Hofbroyhaus (Hofbräuhaus) is a well-known and one of the oldest beer restaurants in Munich.

The three-storey building with an attic has several internal halls and a summer beer garden (Biergarten), located under the century-old chestnut trees and enclosed by the historic walls of the tavern.

The beer garden has room for almost 400 guests.

The Hofbroyhaus is located in the historic center of Munich, on Platzl Square, at the address: Hofbräuallee 1,. 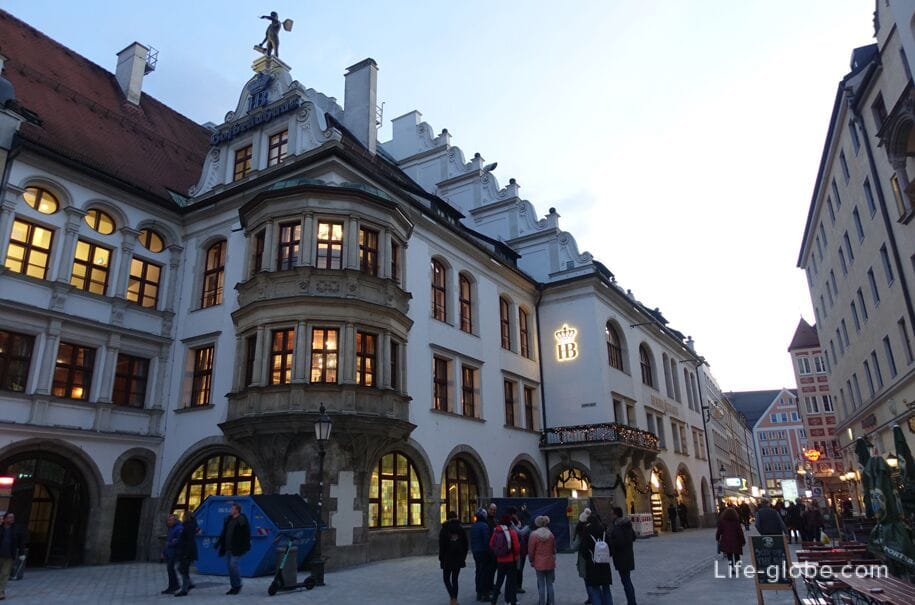 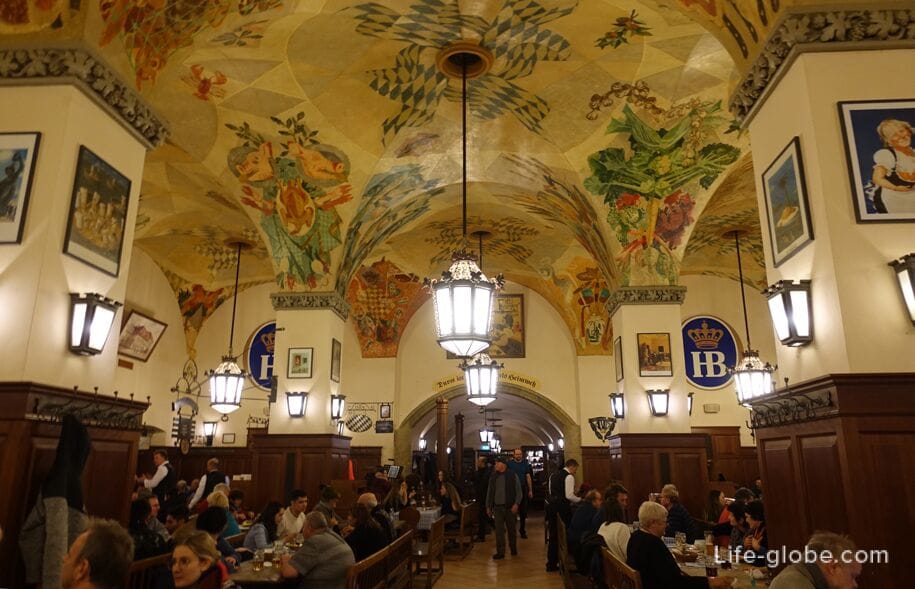 Beer garden on the Viktualienmarkt

Viktualienmarkt is an open-air market in the center of Munich, which is home to the beer garden "Biergarten Viktualienmarkt", which, although not the largest in Munich, is certainly the most central.

The beer garden has a capacity of 1100 seats. There is not just one brewery represented here, but the major Munich breweries alternate in a 6-week cycle: Hofbräu, Spaten Bräu, Augustiner Bräu, Hacker Pschorr, Paulaner, Löwenbräu.

Beer gardens in the English Garden

The English Garden (Englischer Garten) is a large public park in the center of Munich, which is one of the largest urban parks in the world.

In the park, surrounded by greenery, there are several restaurants with beer gardens:

- Restaurant "Restaurant am Chinesischen Turm" with one of the largest beer gardens in the city, having about 7,000 seats.

The beer garden is located near the Chinese Tower (Chinesischer Turm), at the address: Englischer Garten, 3. Website: chinaturm;

- restaurant "SEEHAUS"»" with a beer garden "Biergarten" with terraces, known for its Mediterranean style.

The beer garden is located on the shore of Lake Kleinhesseloer, at the address: Kleinhesselohe, 3. Website: kuffler.de/de/restaurant; 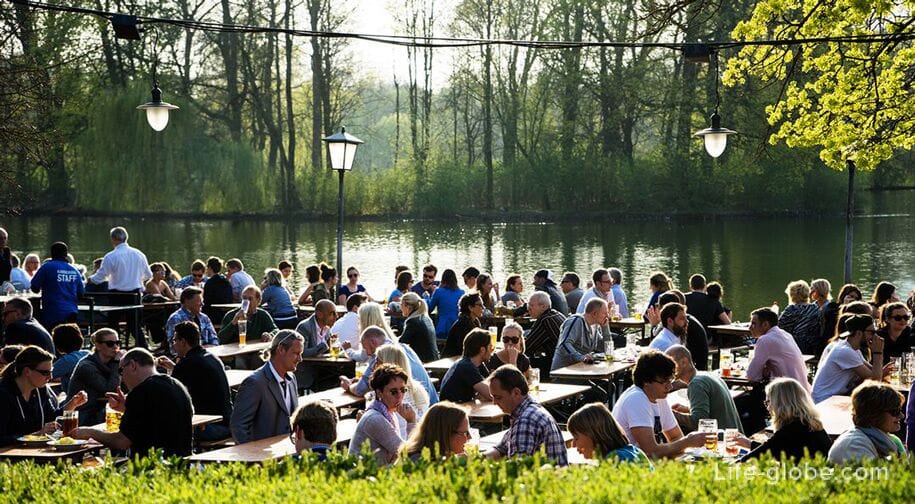 - beer garden "Hirschau im Englischen Garten», with a capacity of approximately 1,800 guests, it is historic and located in the middle of large chestnut trees, in the heart of the English Garden.

There is a children's playground near the beer garden.

- restaurant with a traditional beer garden "Aumeister" with a children's playground, located on the northern edge of the English Garden, at the address: Sondermeierstrasse, 1 . 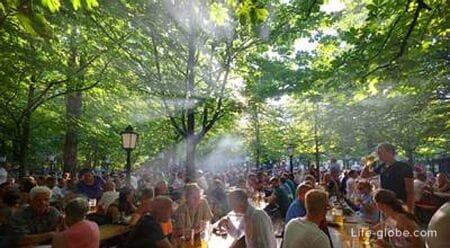 The Löwenbräukeller restaurant is one of the oldest, largest and most famous beer halls in Munich, built by the Löwenbräu brewery since 1882.

The restaurant has several halls and a beer garden «Löwenbräukeller Biergarten». 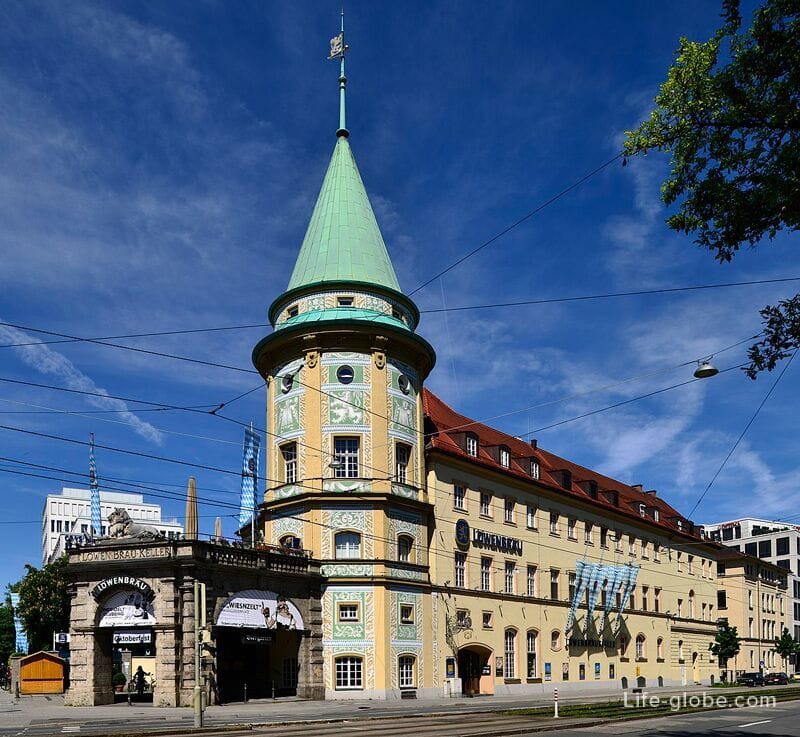 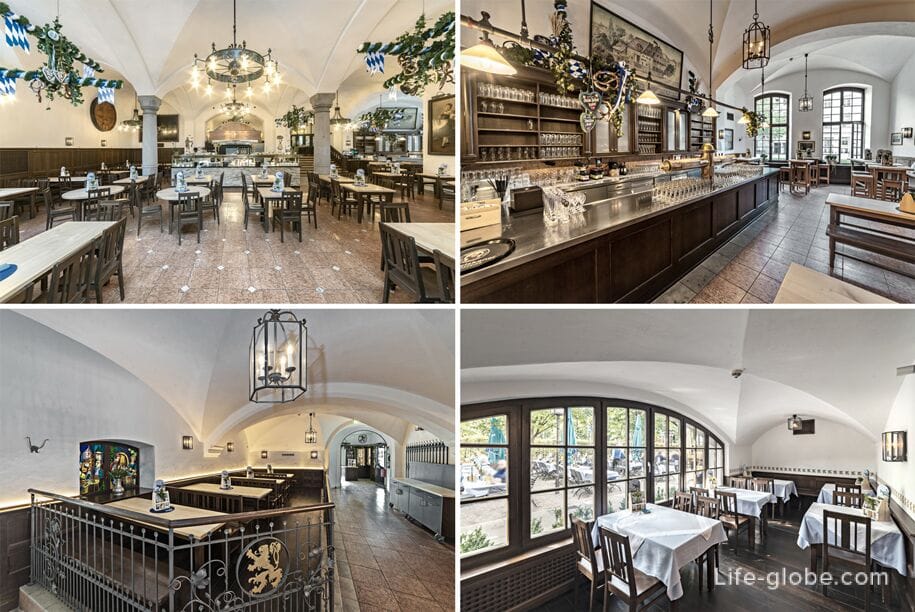 The Augustiner-Keller Restaurant is located in a historic building with an adjacent territory and features a beer garden with a children's playground.

The restaurant has several halls and terraces, including a hall in the former basement, where beer was originally stored.

The beer garden, designed for about 5,000 thousand guests, is located in the open air near the restaurant building, which was first mentioned on the map of Munich in 1812, and since 1895 its appearance has not changed.

The restaurant focuses on traditional Bavarian cuisine, which is complemented by international dishes, including light and vegetarian dishes. 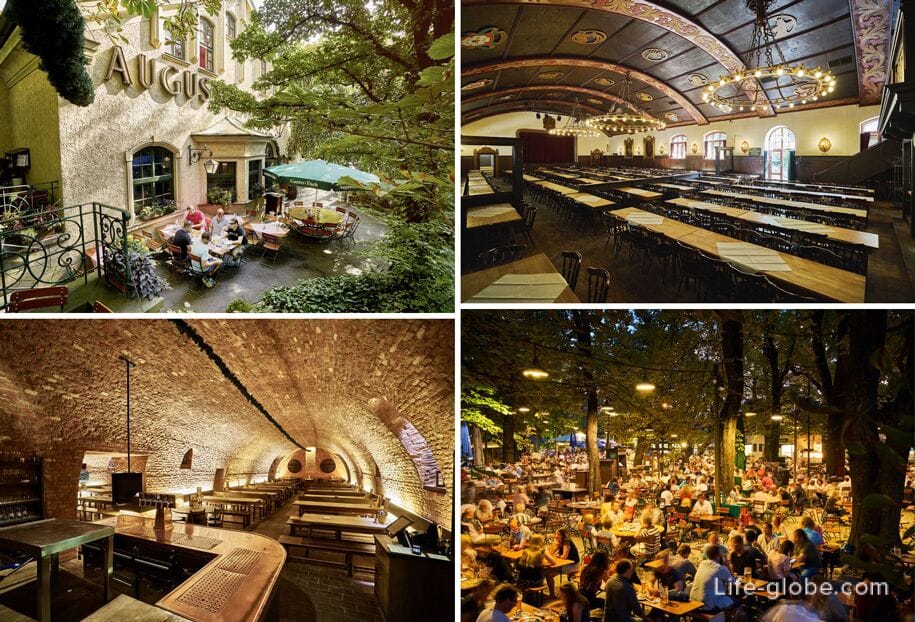 The service area of the beer garden is designed for about 1,200 people. But for those who want to get a beer or snacks on their own, self-service is possible.

The beer garden is located on the edge of the Hirschgarten Park, on the street side Guntherstraße. Website: hirschgarten. 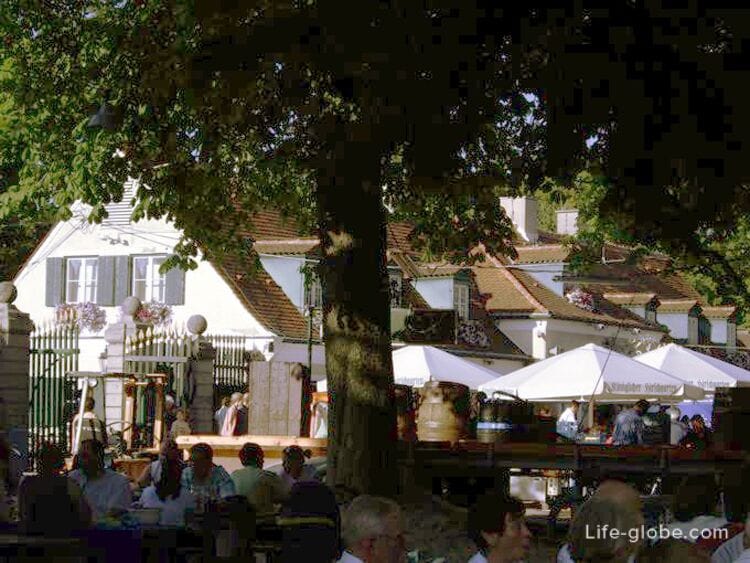 The historic traditional German beer restaurant "Hofbräukeller" (Hofbräukeller) with a beer garden that directly borders the Maximiliansanlagen Park on the River Isar and is one of the most beautiful beer gardens in the city. 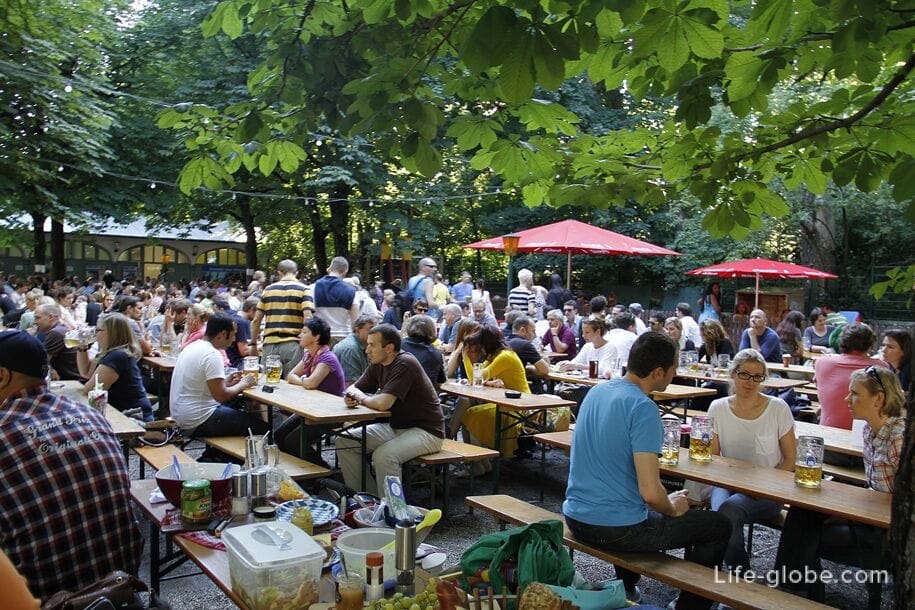 The brewery and restaurant "Paulaner am Nockherberg" with a traditional beer garden with more than 2,000 seats, the possibility of tasting beer "sets" and visiting beer tours, as well as two curling tracks.

The territory of the beer garden is divided into two parts: serviced garden and large traditional beer garden with self-service.

The Strong Beer Festival is held annually during Lent on the terrace and in the main hall of the Paulaner restaurant. The festival begins around St. Joseph's Day (March 19) and lasts for 17 days. The festival is associated with the traditional "feast of the Holy Father" (memorial day on April 2), dedicated to the memory of Francis of Paola, the founder of the religious order of the Paulans. 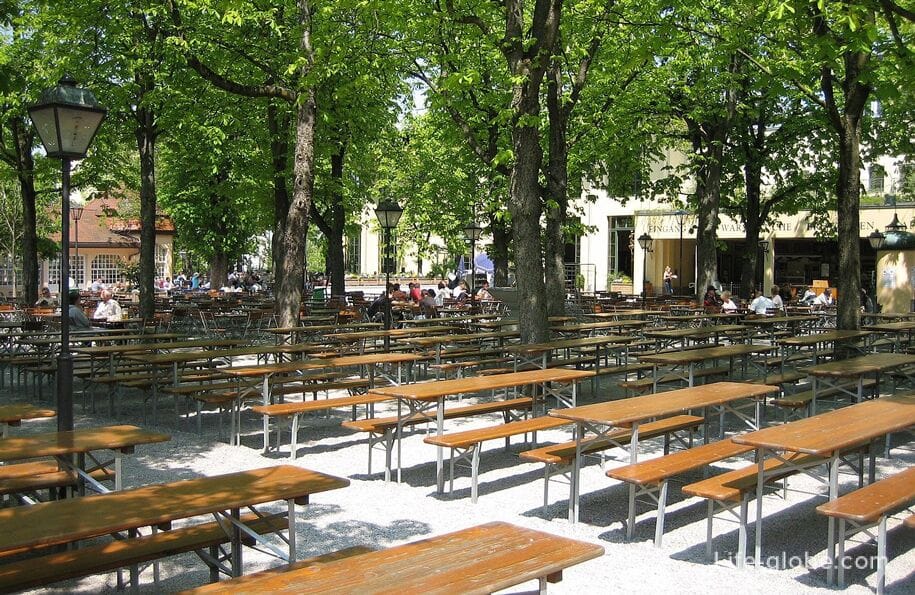 The beer garden "Biergarten am Muffatwerk" is located on the territory of the former first Munich power station, built in the classical style in 1837.

In 1992, the former power station was transformed into a multifunctional cultural center "Muffatwerk", which now houses: a concert venue, an event pavilion" Ampere", a cafe and a beer garden.

The beer garden has 400 seats, about 100 of which are protected from the weather by the largest canopy in Munich.

For the youngest guests, there is a sandbox and organic ice cream. 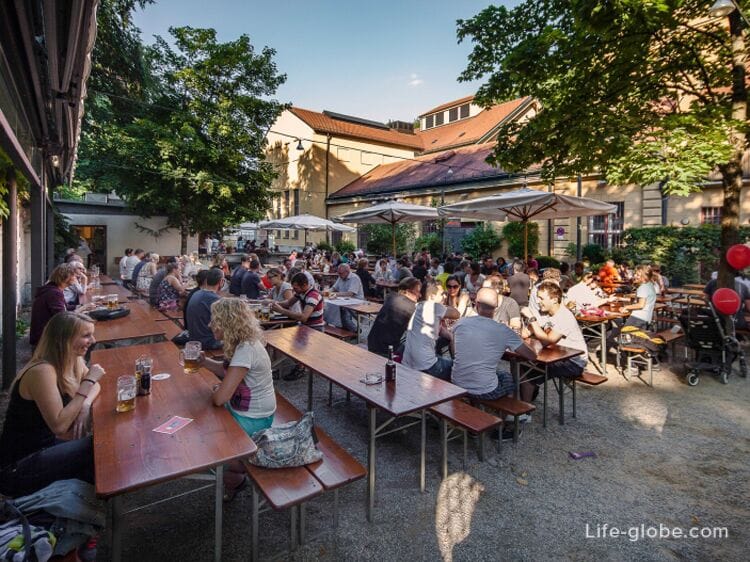 The "Wirtshaus am Bavariapark" tavern with beer garden is located close to the Bavarian Statue and the Teresa meadow.

This establishment with a small beer garden is more used by locals and is not popular with tourists. 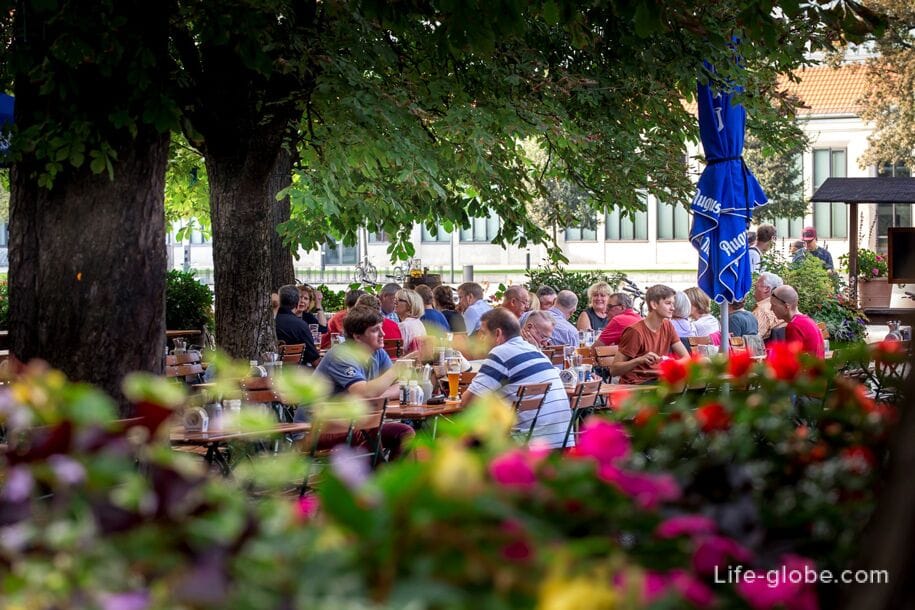 Beer gardens in the park: 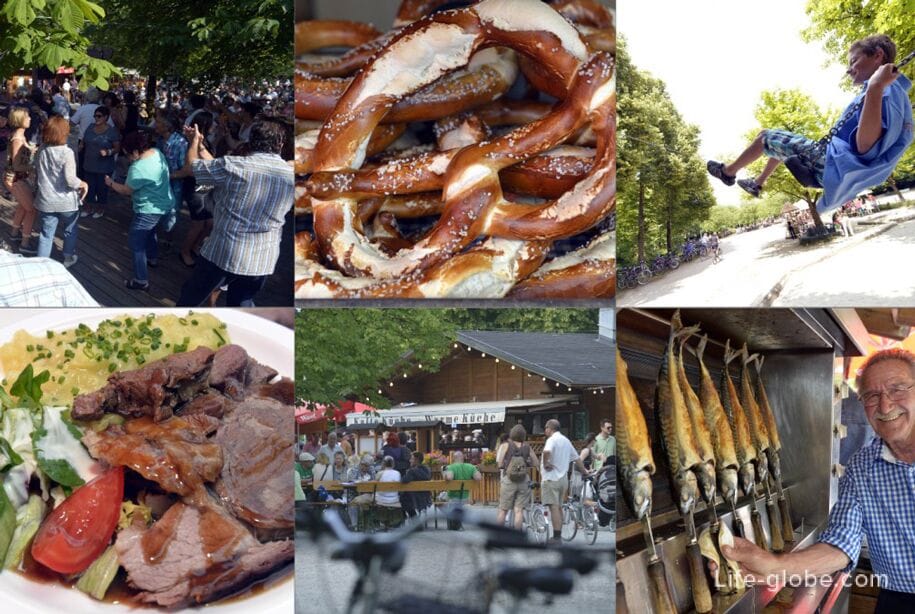 - beer garden "Biergarten am Rosengarten", located near the western edge of the park.

Beer garden in the Olympic Park

Today, the Olympic Park serves as a venue for sports, cultural, social and religious events and festivals, as well as a place for sports, walking and recreation.

In the park there is a small but popular beer garden "Olympiaalm". 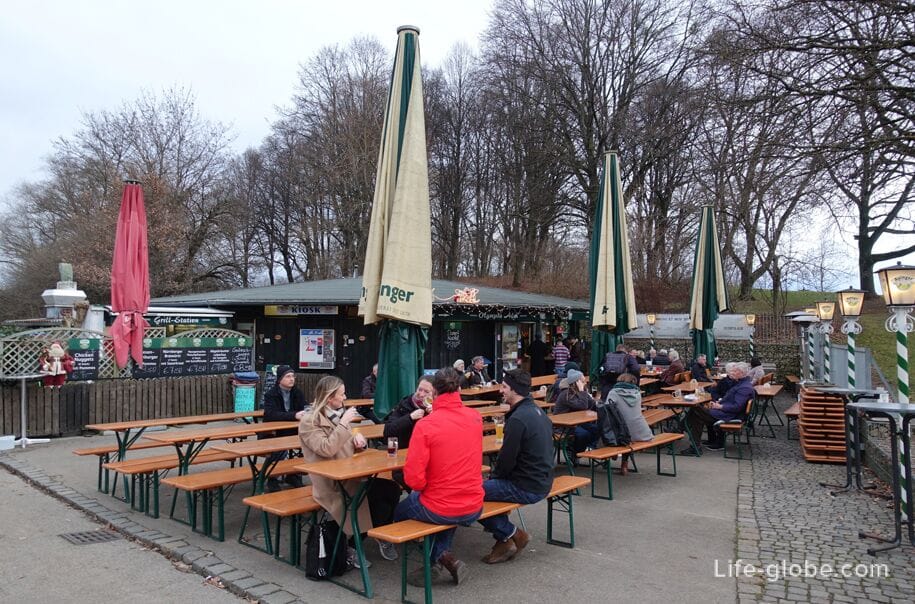 The Flaucher is a green area of the River Isar with swimming and barbecue facilities located in the southern part of Munich.

On Flaucher there are walking and recreation areas, playgrounds and cafes, including the beer garden "Zum Flaucher Biergarten" with 1,300 seats and a large children's playground. 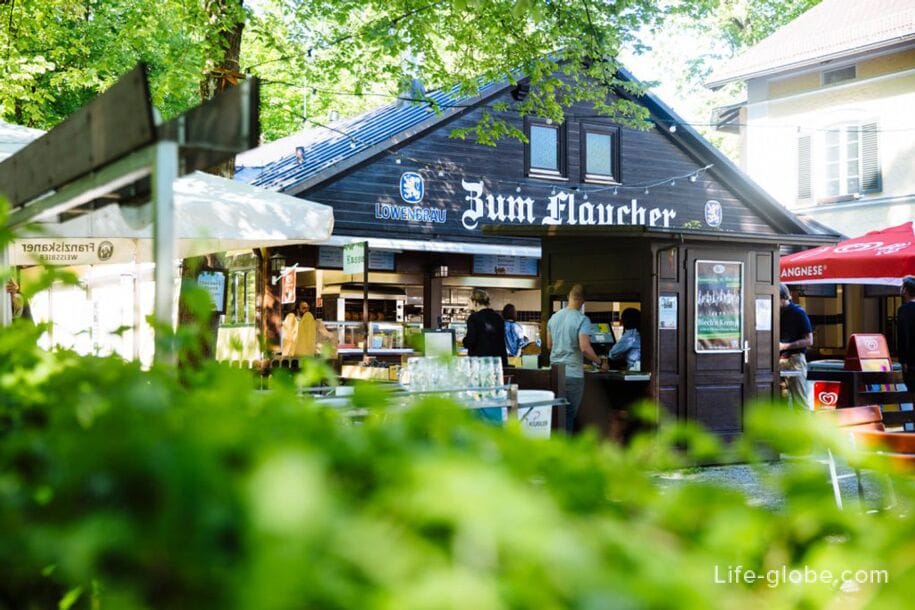 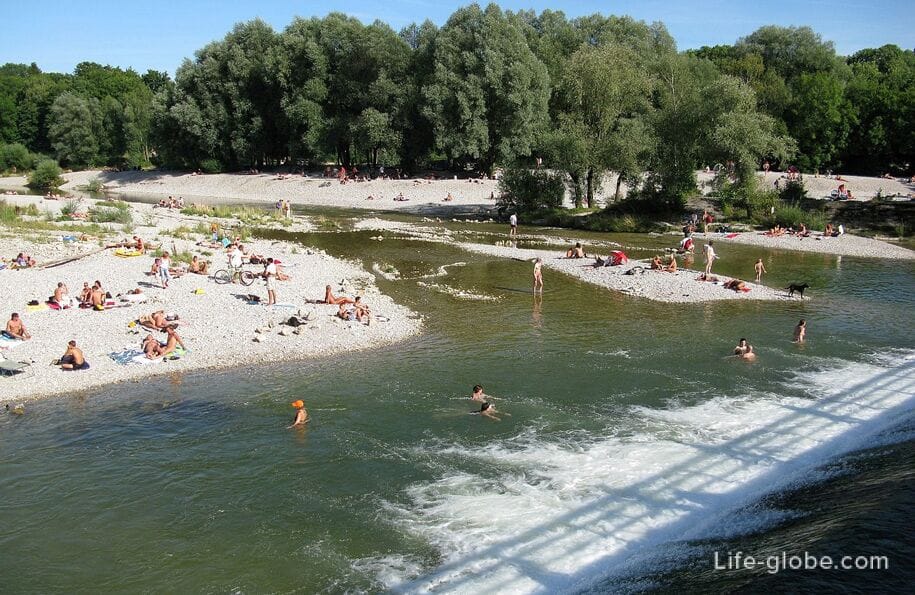 The restaurant with beer garden "Michaeligarten Biergarten" with a children's playground, also has a terrace by the park lake.

The beer garden is located in the Ost Park (Ostpark), at the address: Feichtstraße, 10. Website: michaeligarten. 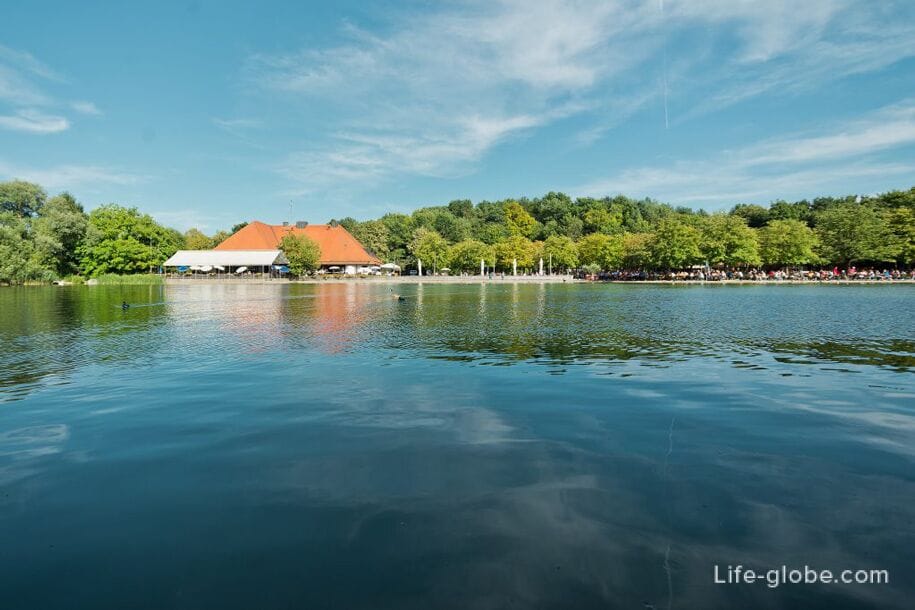 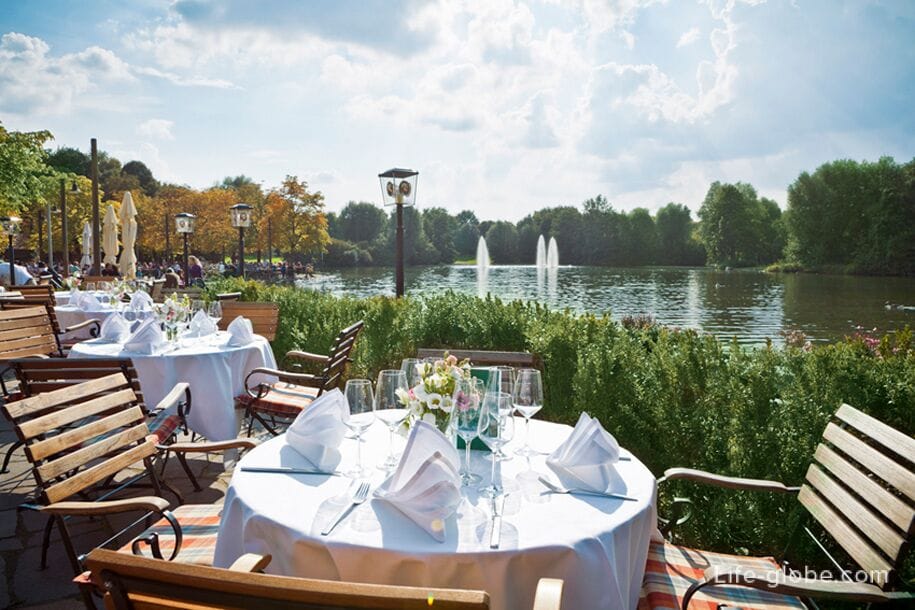 Restaurant "Harlachinger Einkehr" with a beer garden with a children's playground.

The Beer Garden is located in a renovated historic building, on the southern edge of the city, at the address: Karolinger Allee, 34. Website: harlachinger-einkehr. 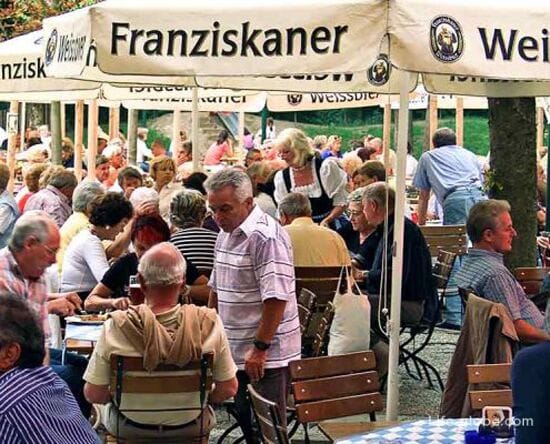 Teresa's Meadow (Theresienwiese) is not a beer garden - it is the largest venue in Munich for celebrations and festivals, including the world's most famous and largest folk festival (beer festival) - Oktoberfest (Oktoberfest), which is held annually from the second half of September to the beginning of October.

During the festival, large tents (beer tents) are set up on the meadow, with a capacity of up to 10 thousand people, in which an atmosphere of general fun reigns, and the smell of beer is in the air.

Also on the territory of the meadow there are attractions and street tents with souvenirs, snacks, sausages, rolls and other Bavarian goodies. 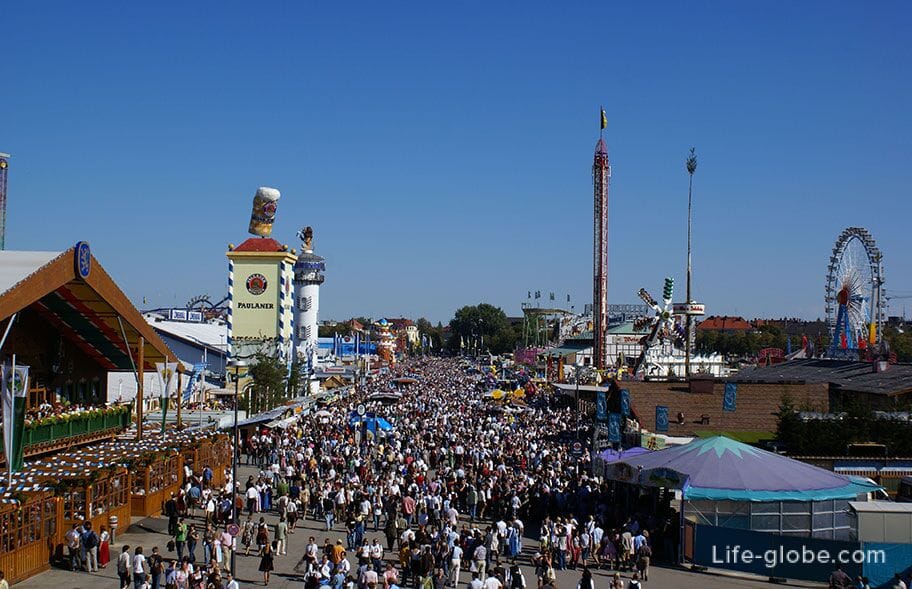 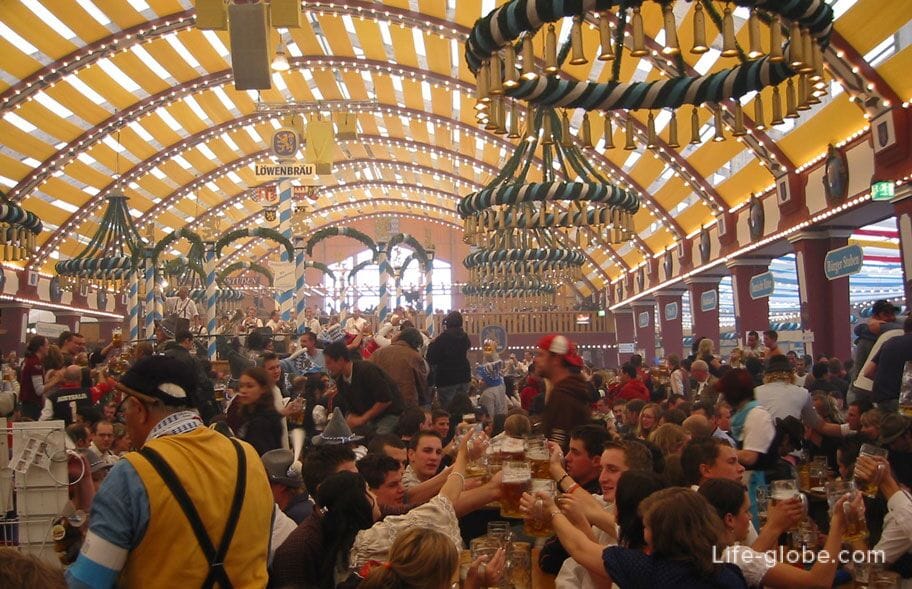 There are hotels in Munich that have restaurants or pubs with small beer gardens. For example:

The 5-star Westin Grand Munich Hotel with 2 restaurants, a tavern with a beer garden, a bar, parking and a spa with a 24-hour gym and an indoor pool.

The hotel offers views of the city.

In the rooms: there is a seating area with a flat-screen TV, and a marble bathroom with a rain shower. For your comfort, you will find bathrobes and toiletries.

A buffet breakfast can be included in the room rate. Link to the hotel 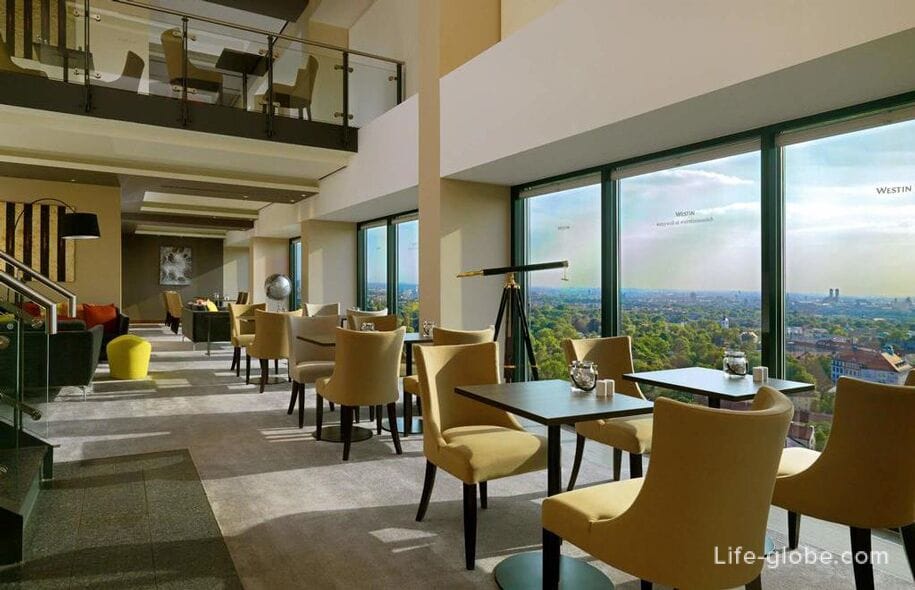 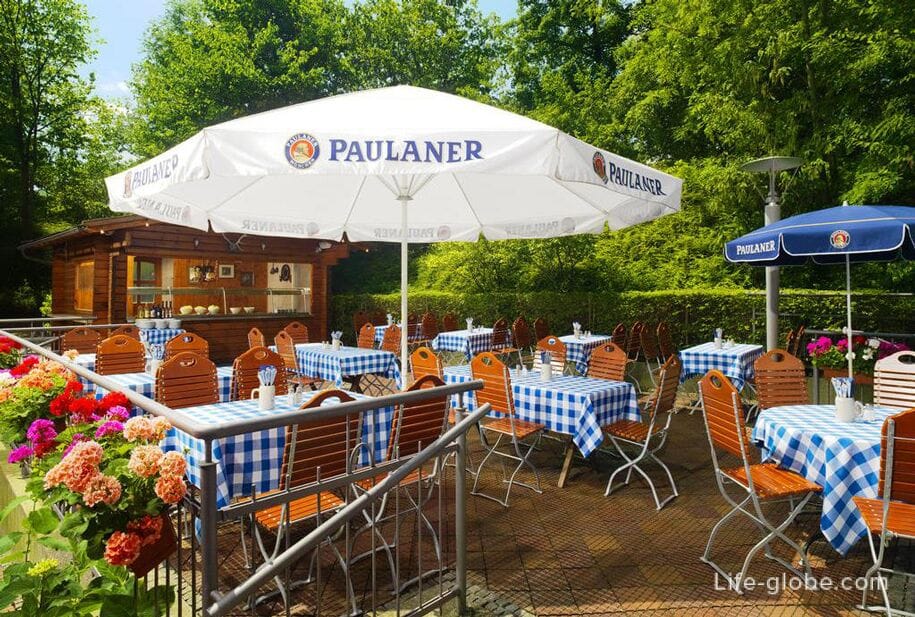 The soundproofed rooms feature wooden furniture, a flat-screen TV, floor-to-ceiling windows and a laptop safe. The bathrooms are equipped with bathrobes and slippers. A free bottle of water is provided in each room. 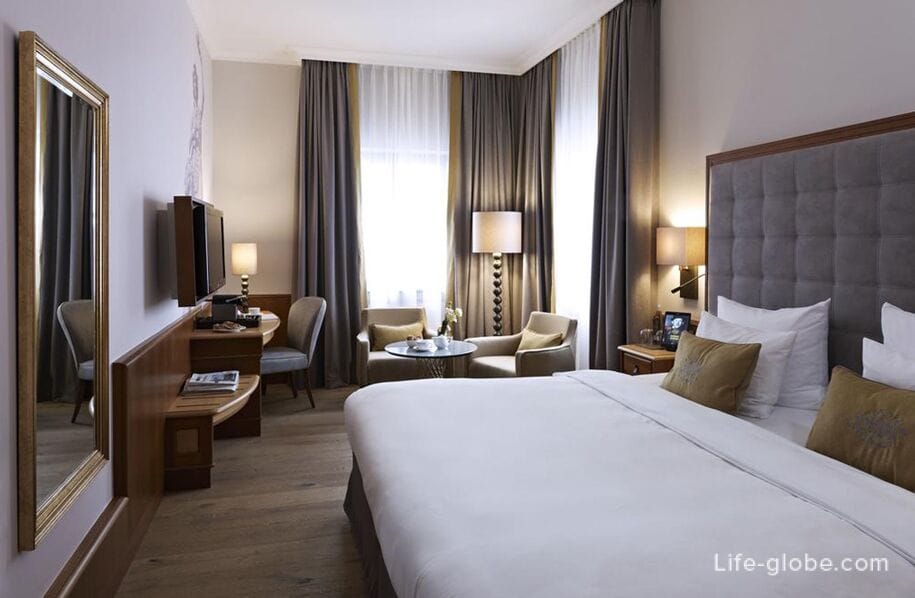 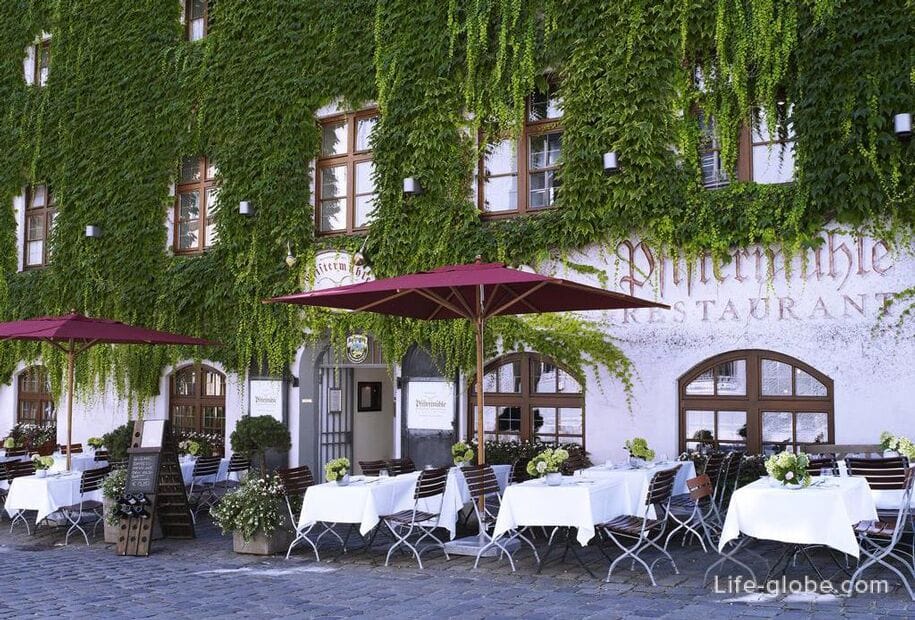 Sheraton Munich Arabellapark 4-star Hotel with 2 restaurants with a bar and beer garden, a lounge with free use of computers and a printer, parking, a spa on the 23rd floor with a heated pool, gym, sauna and steam bath.

In the rooms: air conditioning, a flat-screen TV, tea/coffee making facilities and large windows. Some rooms have a balcony. 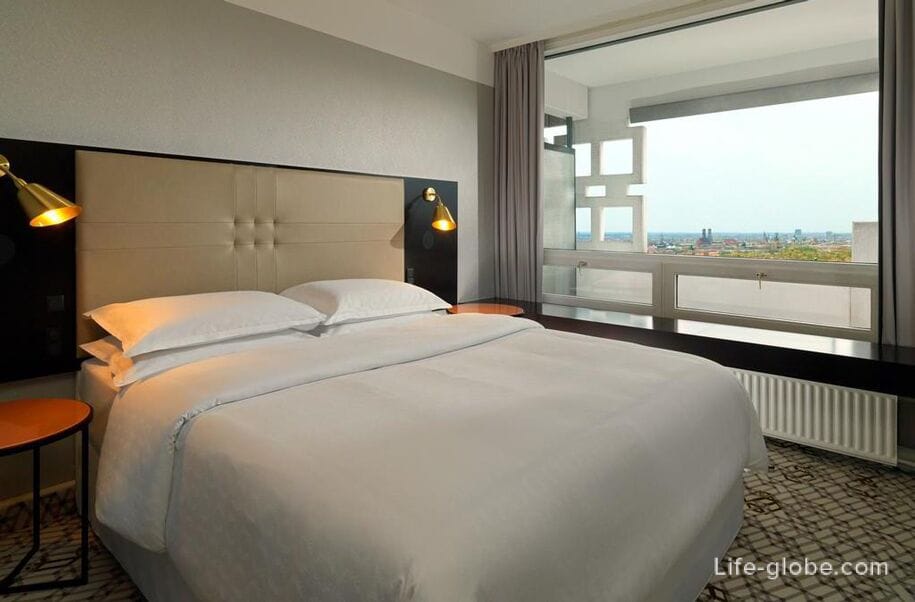 All accommodation facilities in Munich, including beer gardens, pubs, taverns and restaurants, including in the heart of the city, can be view and book here 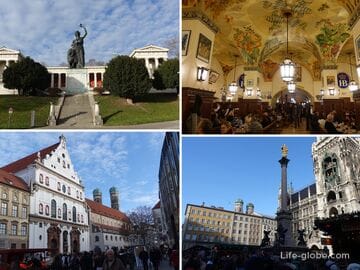 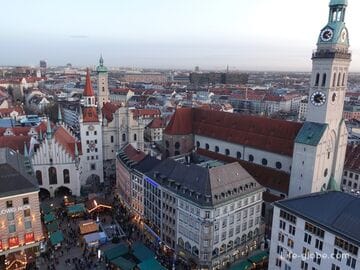 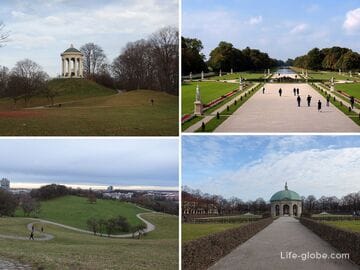