Three towers of San Marino (Guaita, Cesta and Montale) - a symbol of the republic

Three towers in the complex which include: the Guaita tower, the tower Chesta and tower Montale, was built as a fortress and was first documented in 1253.

In 2008, the tower and the entire historic center of San Marino and mount Titano were registered as a world heritage site by UNESCO.

Currently, the towers of San Marino are the main attractions, as well as one of the symbols of the country, which is depicted on the state flag and the coat of arms of San Marino.

Between the towers are walkways connecting the three centuries-old monumental structures.

In the two towers, for a fee, Guaita and Cesta currently, it is possible to enter, while the third tower (Montale), is closed to visitors. 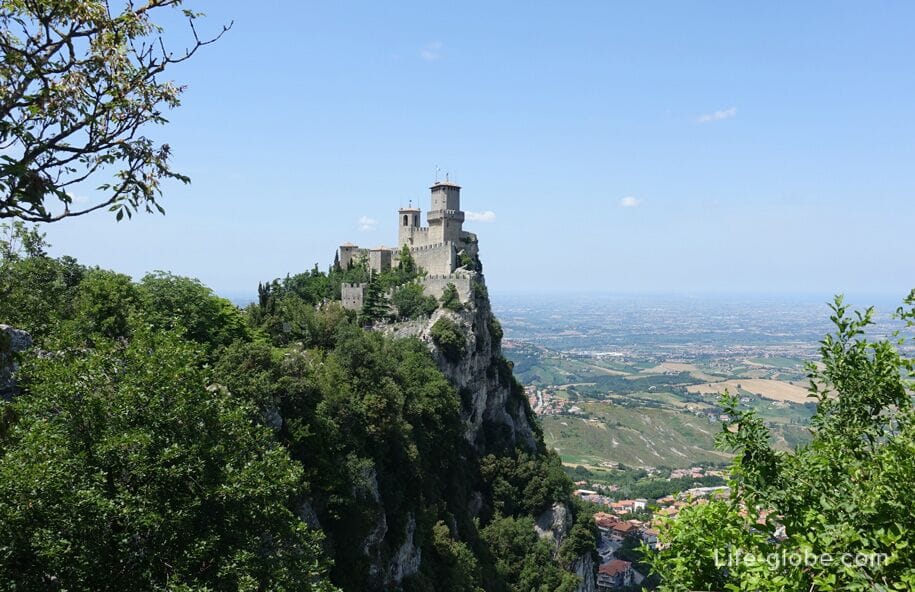 Tower Guaita or Rocca in Italian means the First tower (Guaita, La Rocca, Torre Prima) - the most famous and oldest tower, which dominates over the other two. Surrounded by the oldest of the three walls that once surrounded the city of San Marino and are still visible today.

Originally it was the fortress of Guaita with a pentagonal base built directly into the mountain range, Dating from perhaps the 10th century and for some time served as a prison. Around the tower and inside the walls, originating from the fortress, was officially established the first settlements in San Marino.

During its history, the tower-fortress of Guaita was repeatedly rebuilt and modernizirovat. Its present form it received in the second half of the 15th century, during the war between San Marino and the home of the Malatesta.

Stone coat of arms in the Baroque style, which can be seen on the front door, belongs to the Republic and dates back to the year 1600. The upper door, which is accessed via a staircase, 1481 protected berteskiu. In the courtyard of the tower there are a few artillery shells Dating to the time of the last war: two mortars, a gift from Vittorio Emanuel II and two guns - the gift of Vittorio Emanuel III.

On the territory of the tower is the chapel of St. Barbara (Cappella di Santa Barbara). 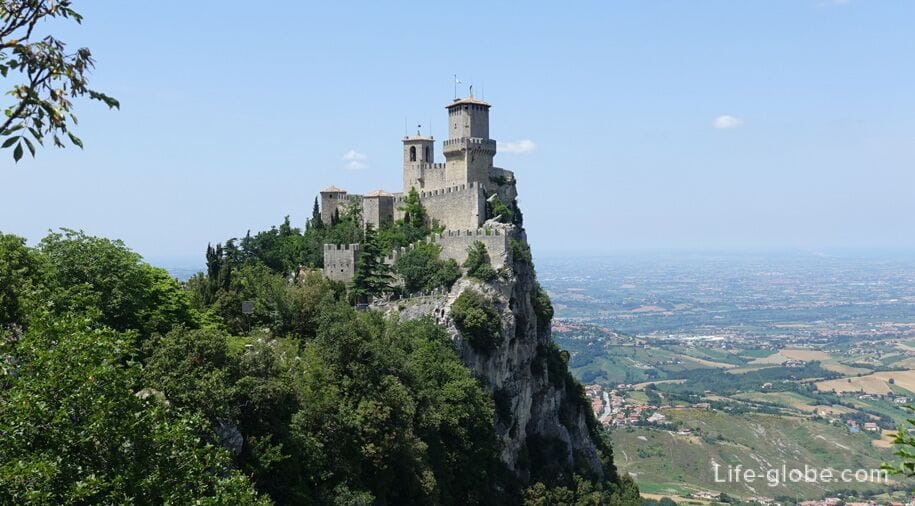 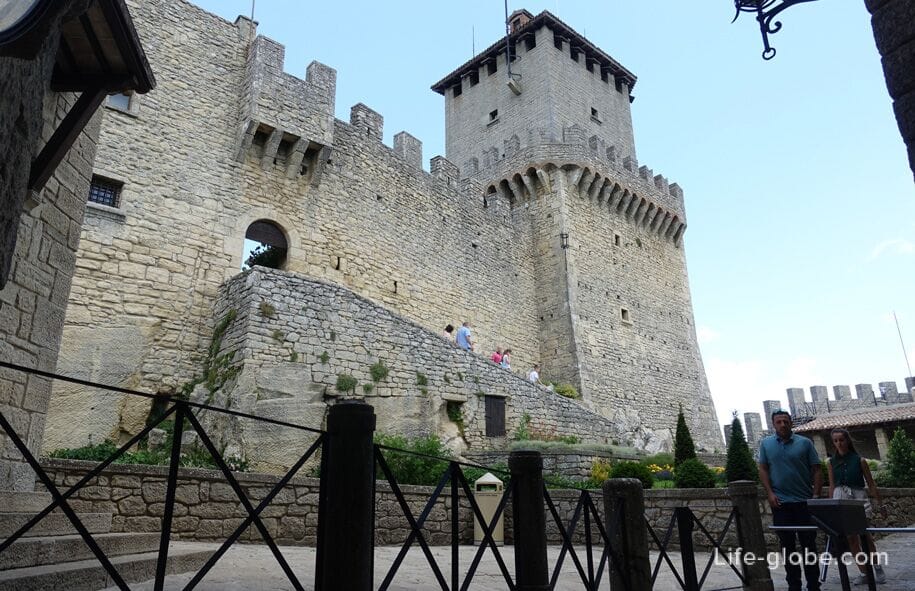 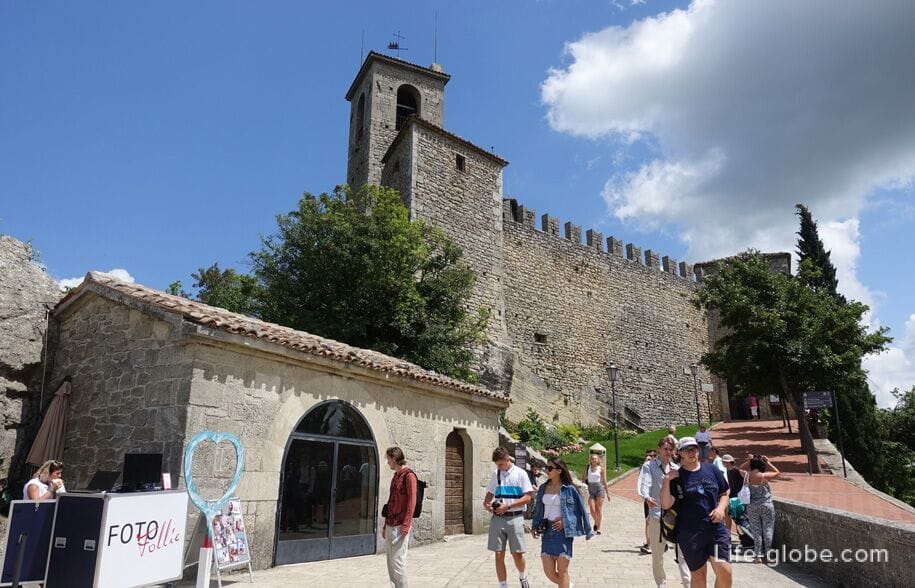 Near the Guaita tower is located adjacent Playground, with panoramic views of the surrounding area. 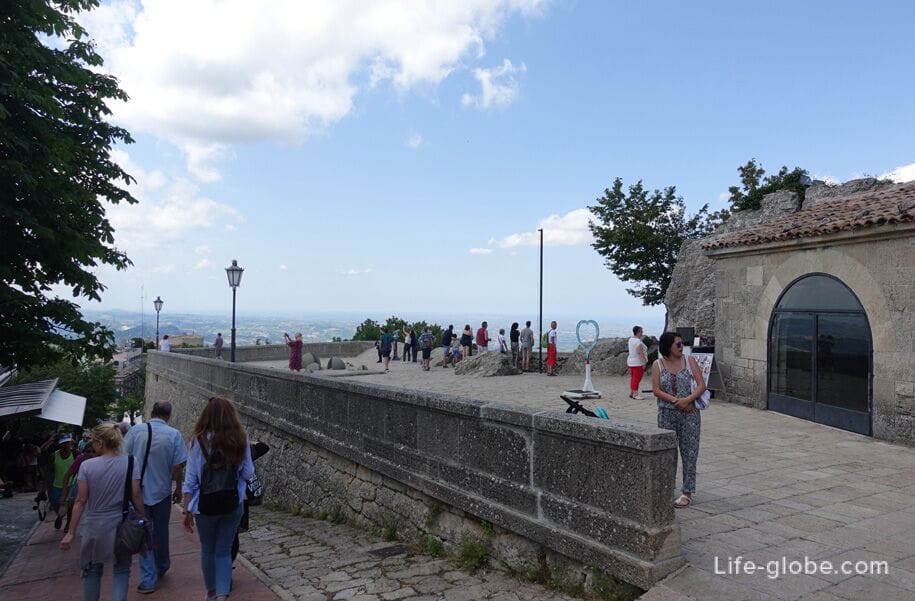 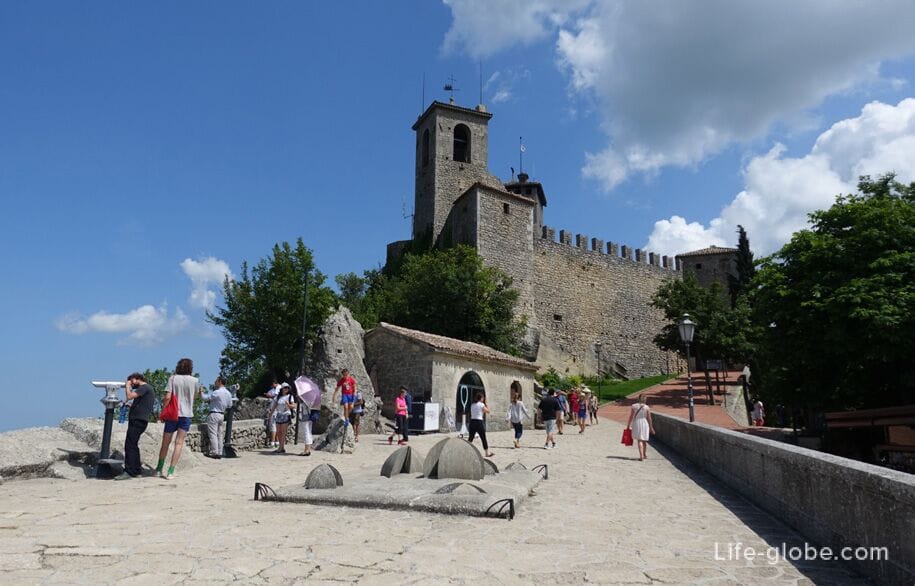 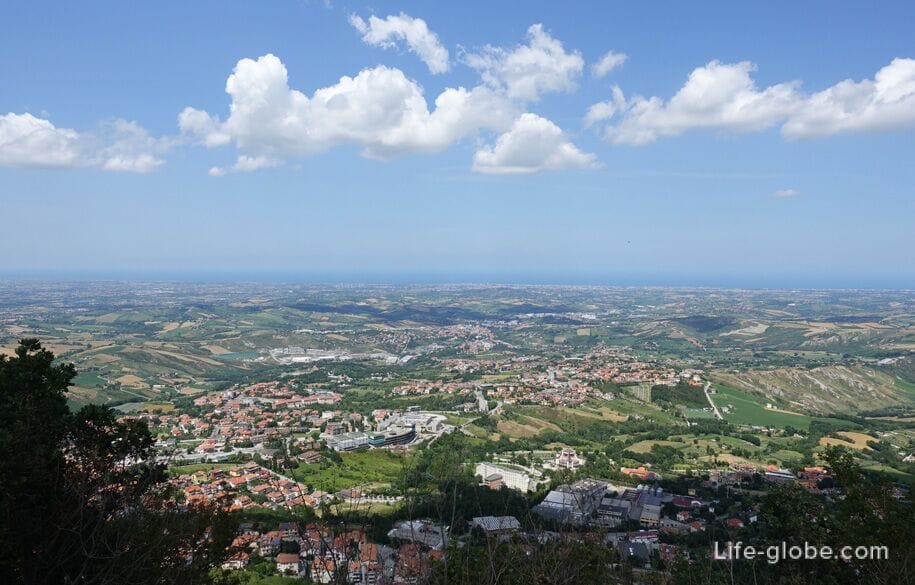 From tower to tower Guaita Chesta is a stone road, lots of stairs, known as "witches" (Passo delle Streghe). Witches is one of the most photographic places in the historic center of San Marino. Sometimes, to make photos, you need to stand in line. 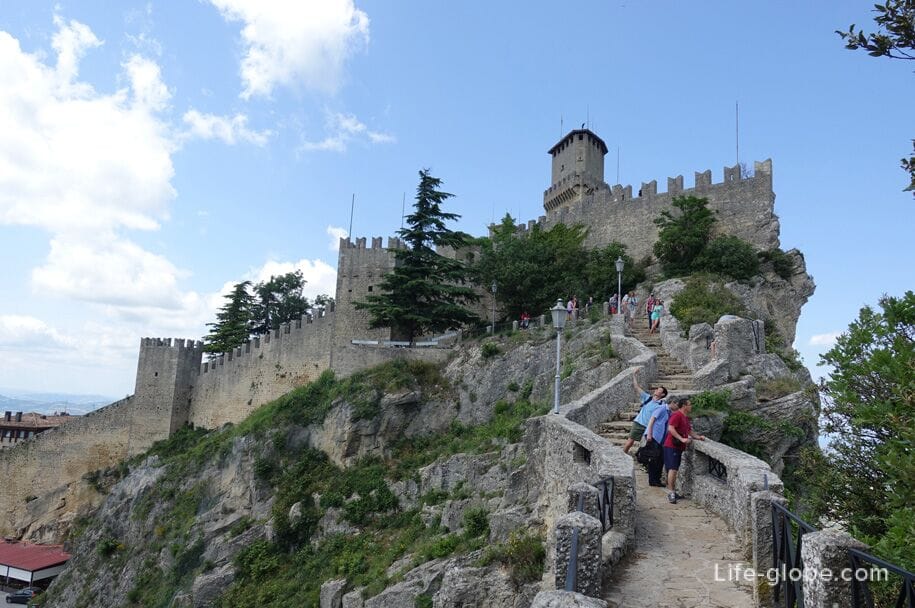 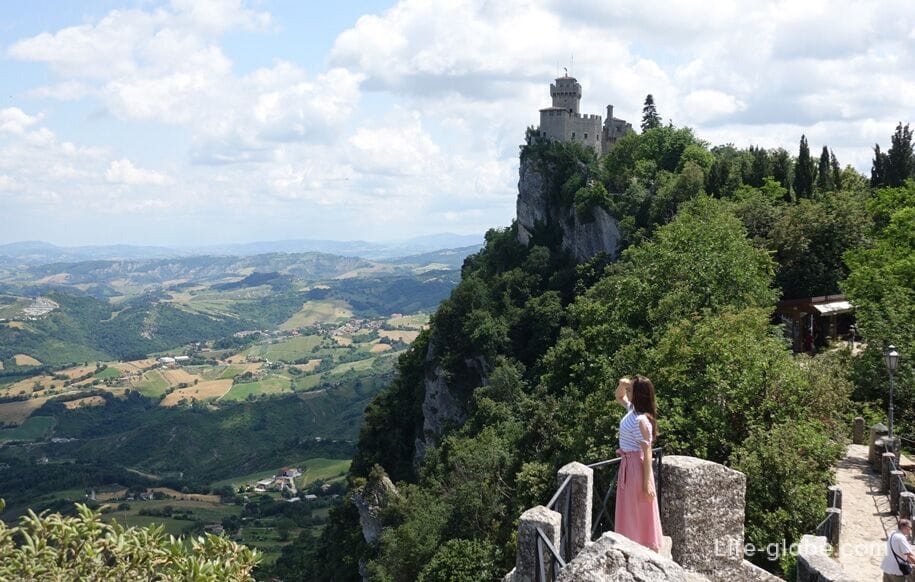 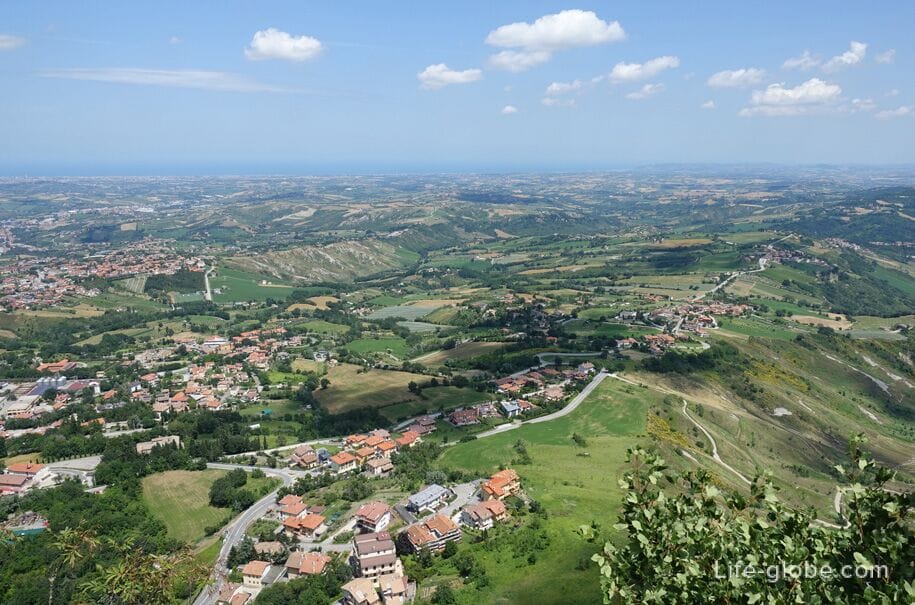 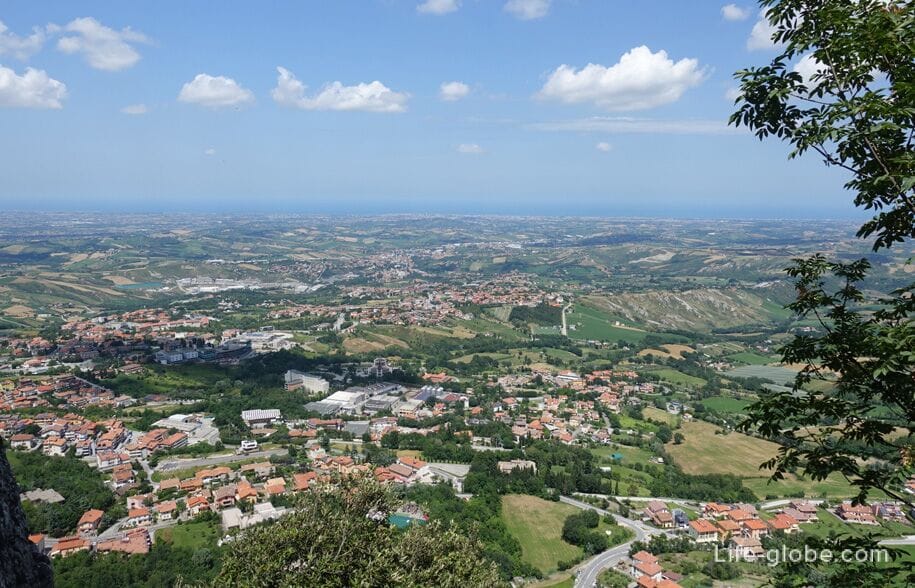 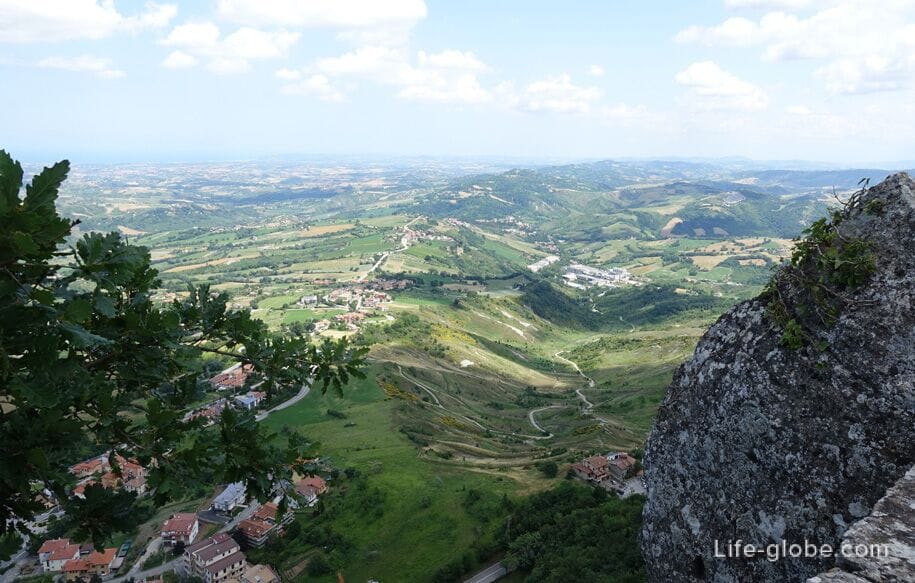 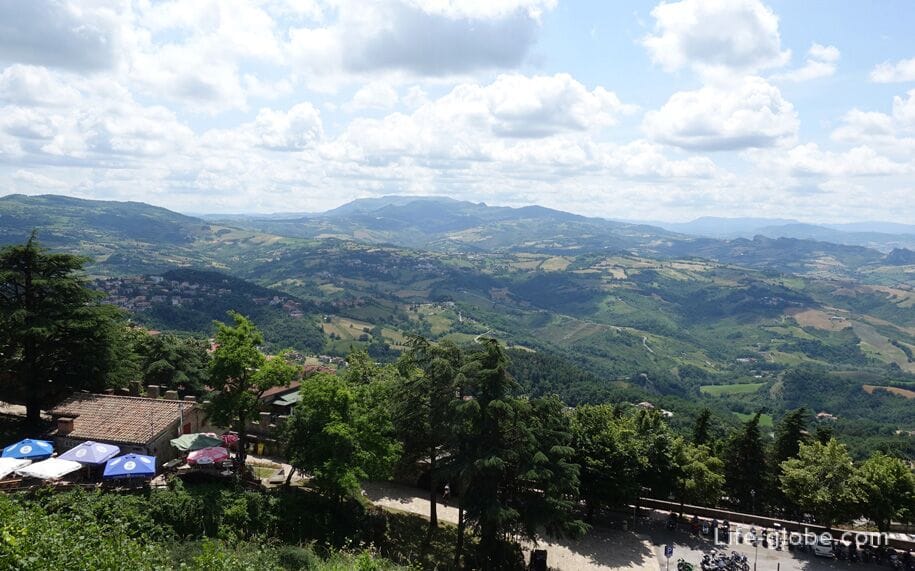 Tower Chesta or Fratta, translated from Italian means the Second tower (Cesta, La, Fratta, Seconda Torre) is a tower located on the highest peak of Monte Titano (the height of 756 meters).

The tower was built in the late 11th century, in the pentagonal form. Was a place for protection of the territory, it also housed a prison cell.

By the end of the 16th century, after the strategic value of the tower ceased to be relevant, it was withdrawn from use until 1930, when as part of the modernization of the country after the construction of narrow gauge railway Rimini-San Marino (now not existing), to attract the flow of tourists it was decided to restore medieval monuments.

Today, the walls of the former fortifications is a Museum of ancient weapons, which includes about 535 items, including weapons, including firearms and armor Dating from different periods between the middle ages and the end of 1800-ies. The rest of the collection, which overall has more than 1,550 exhibits, is located in the "Centre for research on weapons from the middle ages to the twentieth century" in Borgo Maggiore. 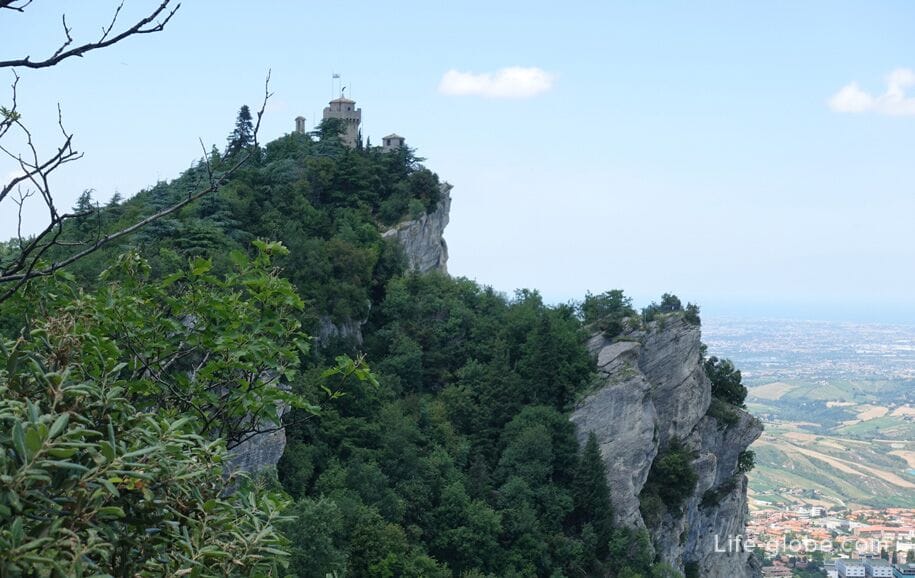 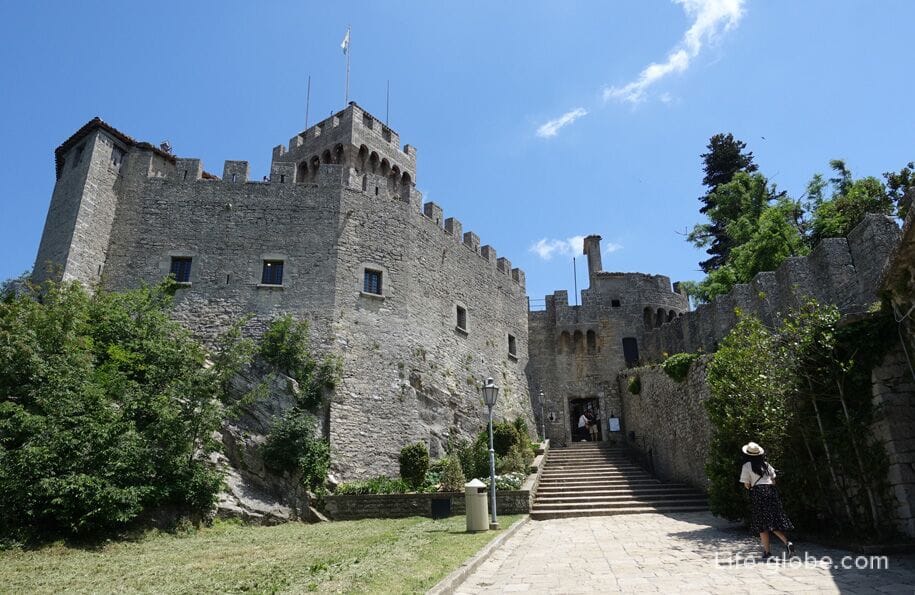 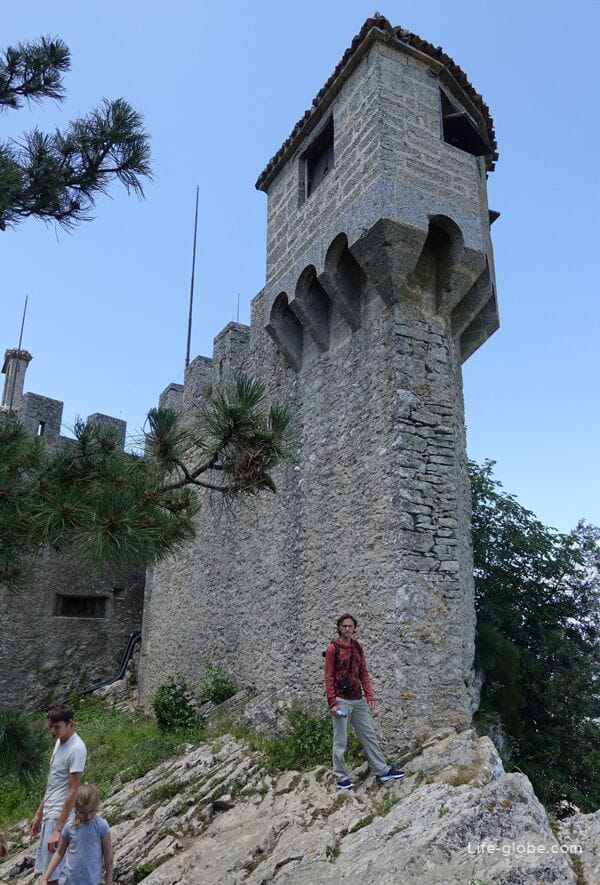 The section of the wall (now Salita alla Cesta), which is from the tower leads to the ancient career, refers to the remains of the second city wall, built in the thirteenth century. In fact, the city of San Marino were fortified by three walls, built in three different epochs and largely destroyed, in order to expand the city. 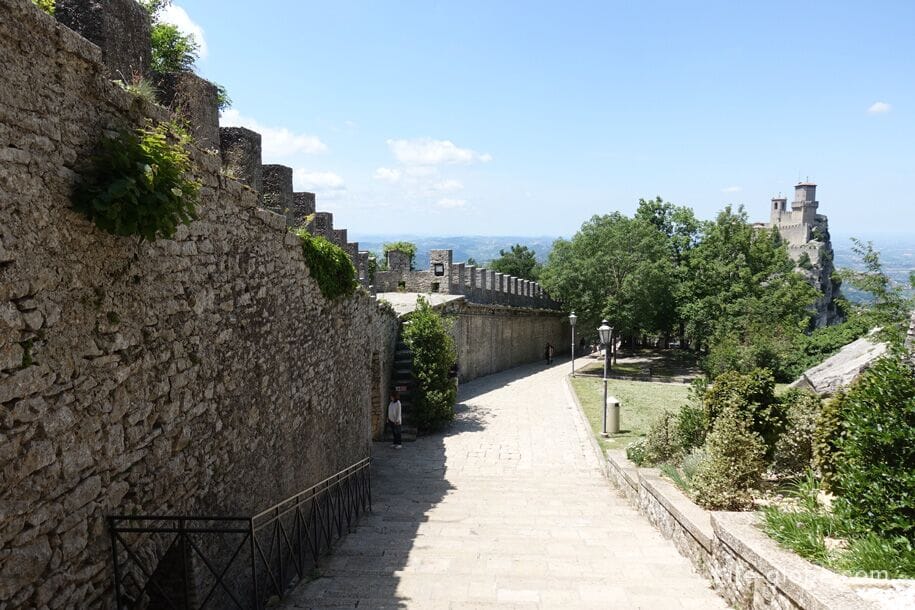 The path from tower to tower Chesta Montale 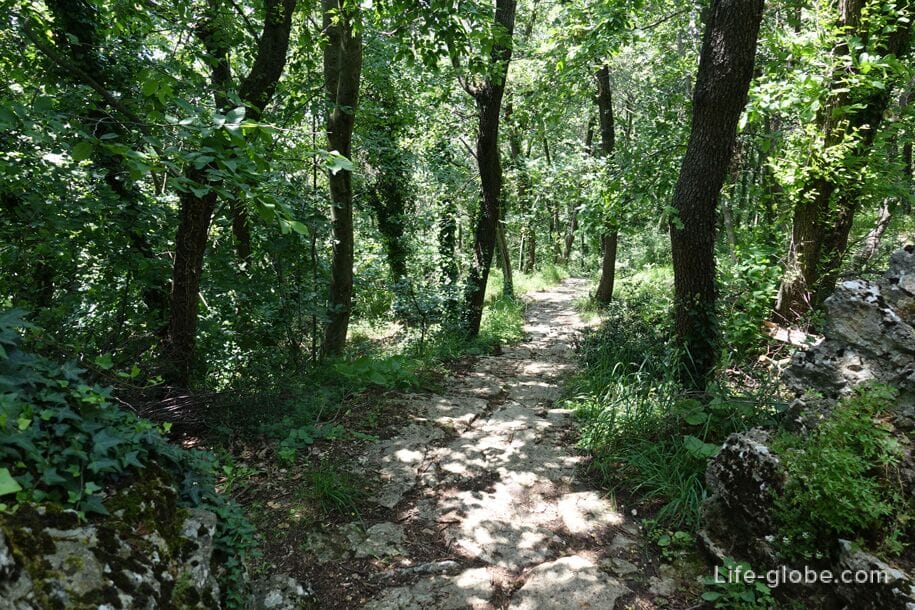 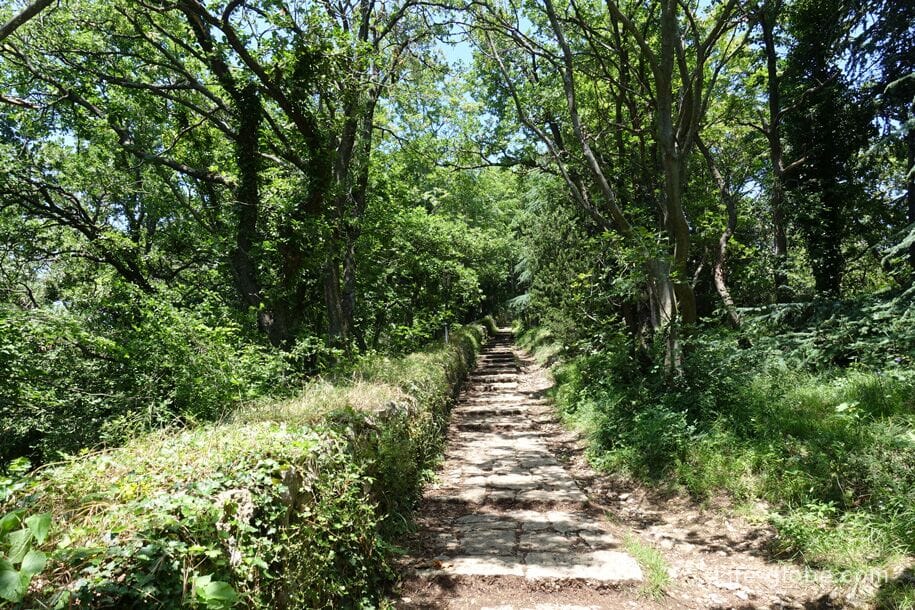 Tower of Montale in San Marino

This is the smallest in size, the tower played a strategic role in the defense because geographically was in a better position for the convenience of observation.

Montale is, in fact, a former fortress with a pentagonal plan, for centuries, restored several times, with the last restorations of 1935. Located deep inside the 8-meter pit (prison) called "tower bottom". The entrance to the tower is closed.

Around the tower of Montale it is possible to see large boulders of ancient rocks, the primitive is applied as the wall. 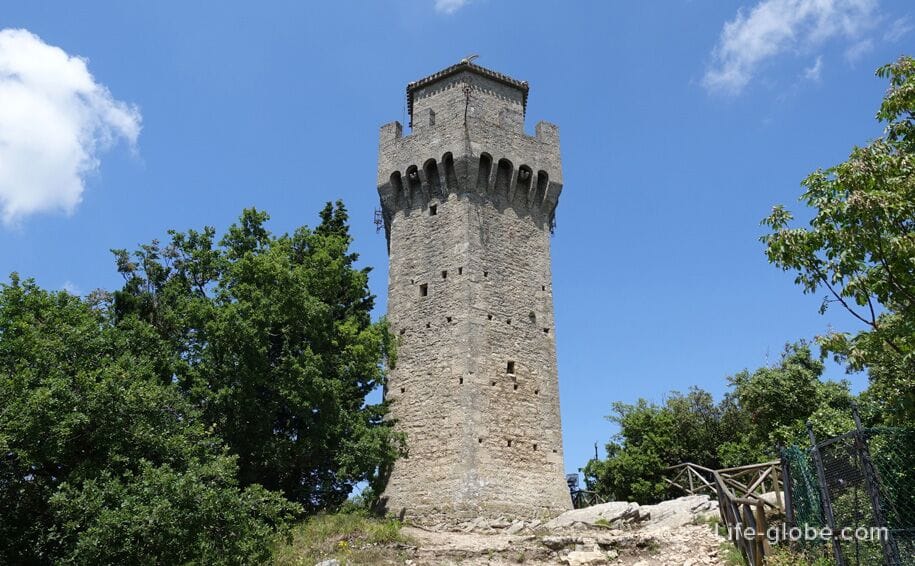 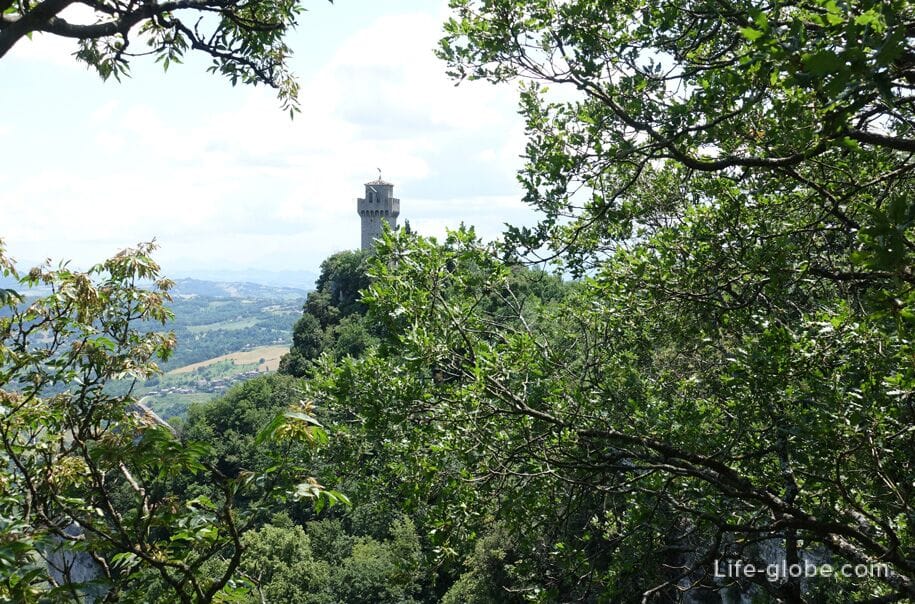 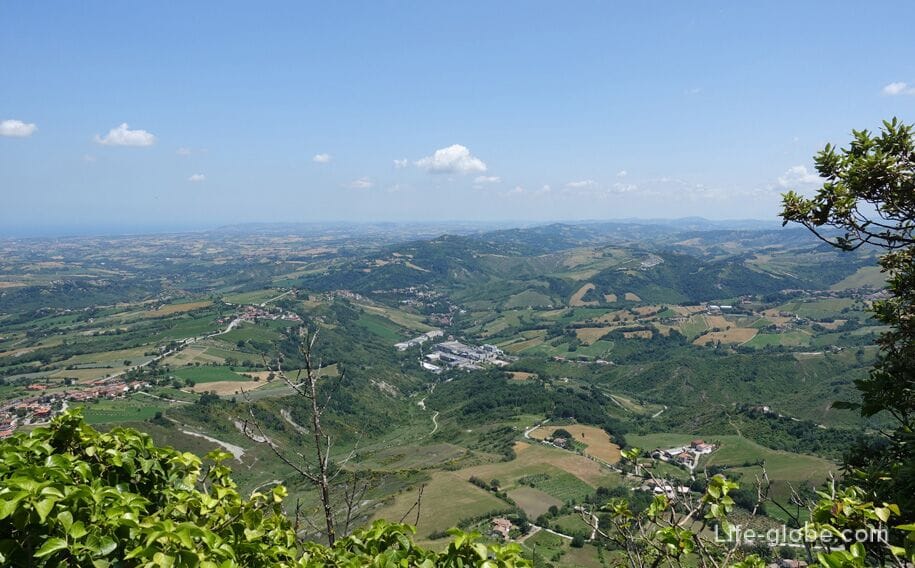 Entrance to museums towers Guaita and Chesta at 4,50€, combined ticket to the two museums of the two towers - 6.50 Euro. Desks are located directly in front of the entrances to the tower. 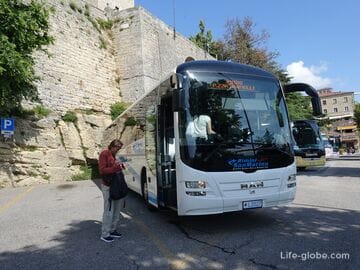 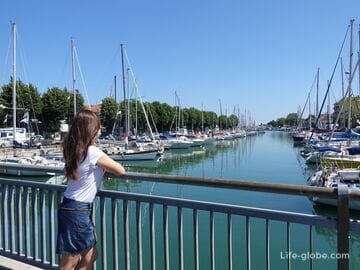 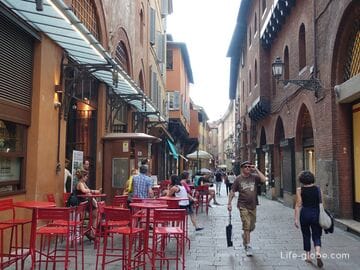