Dome square (Doma laukums) the largest area of old Riga and one of the main attractions of the capital of Latvia. Each year the area as a magnet for hundreds of tourists. Located this legendary square in the heart of Riga's old town, pass up will be simply impossible.

On the dome square, the cafes and restaurants under the open sky, colorful gingerbread houses, magnificent medieval architecture, art Museum, and, of course, the pearl of Latvia - Riga dome Cathedral with its famous and one of the largest organ in the world. 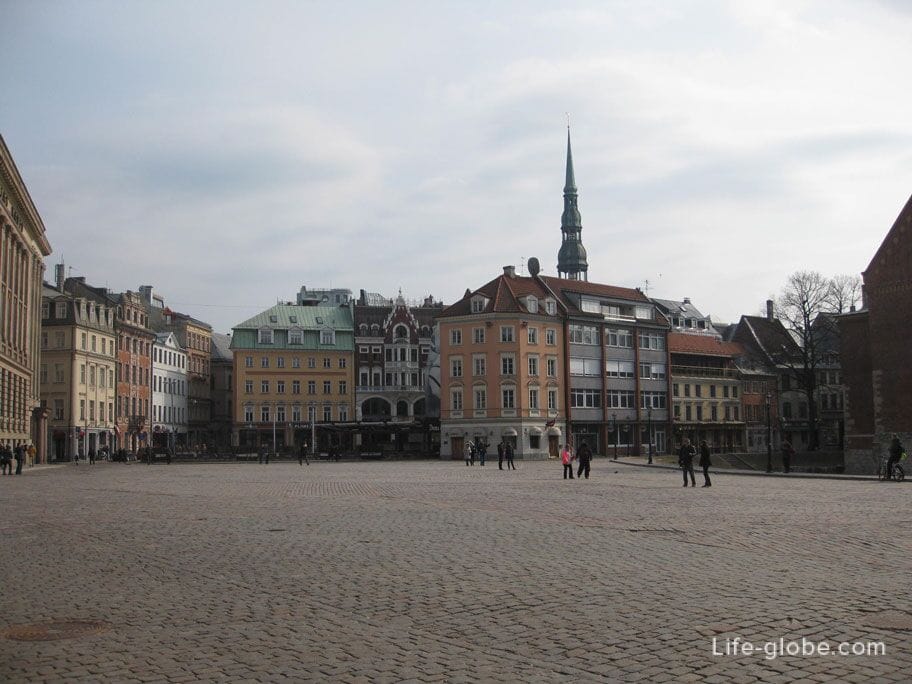 The dome Cathedral is the oldest, largest and magnificent building in Latvia. The Cathedral contains art and historical treasures, including the famous organ, a carved wooden altar and the mechanism of an old clock tower. Cathedral doors are open to everyone. The Cathedral hosts concerts of organ music. Details about dome Cathedral with its famous organ and the interior design we described in the previous article, read and see pictures here. 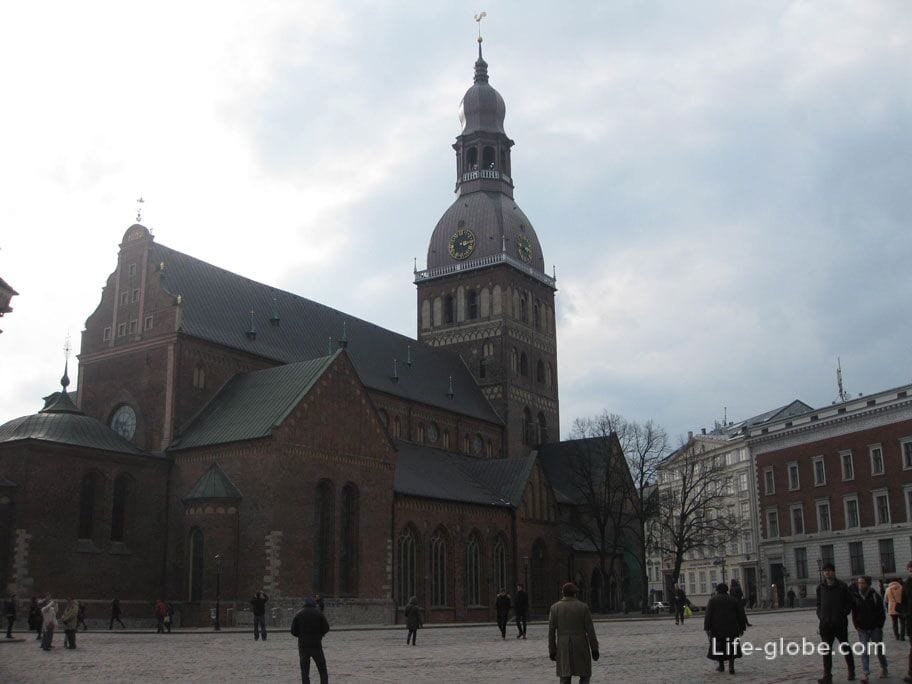 The ensemble of Riga dome square began to take shape in the late 19th century, when for the relief of the approach to the dome of the Cathedral was demolished a block of old houses. During its rich history the area repeatedly restored and changed its size, has also repeatedly changed the name of the square. As it did not name the Area on 15 may, with an Area of 17 June and only in 1987 the area in recent times changed its name to the historical, and once again became known as the dome. 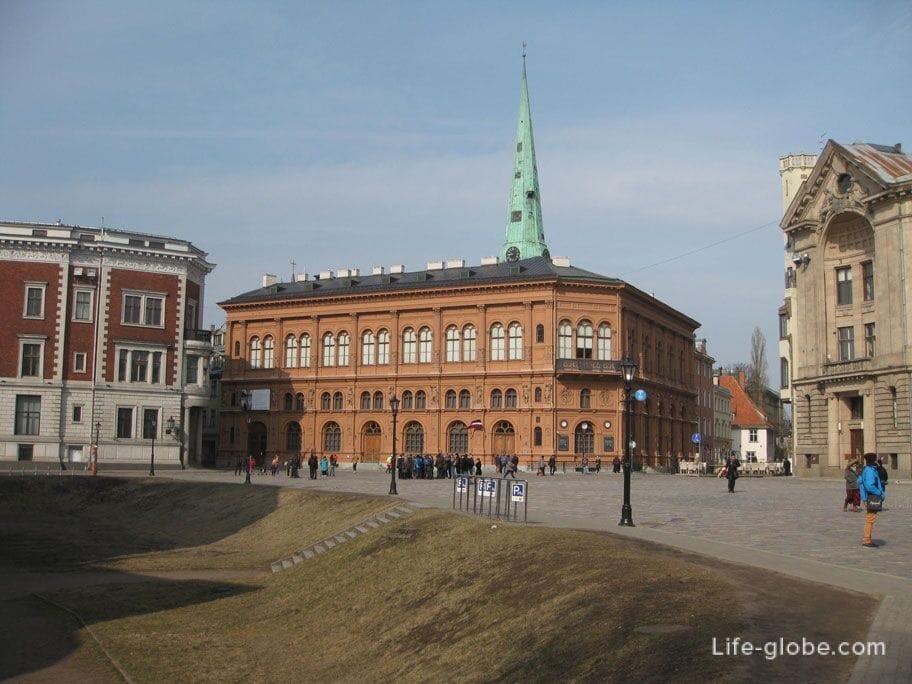 From the square in different directions waste well, or are drawn to the square, the narrow winding streets of the old city. On any of these streets you go, will be released on dome square. And the Golden Cockerel adorning the tower of the dome Cathedral is visible from any point of the old town of Riga. 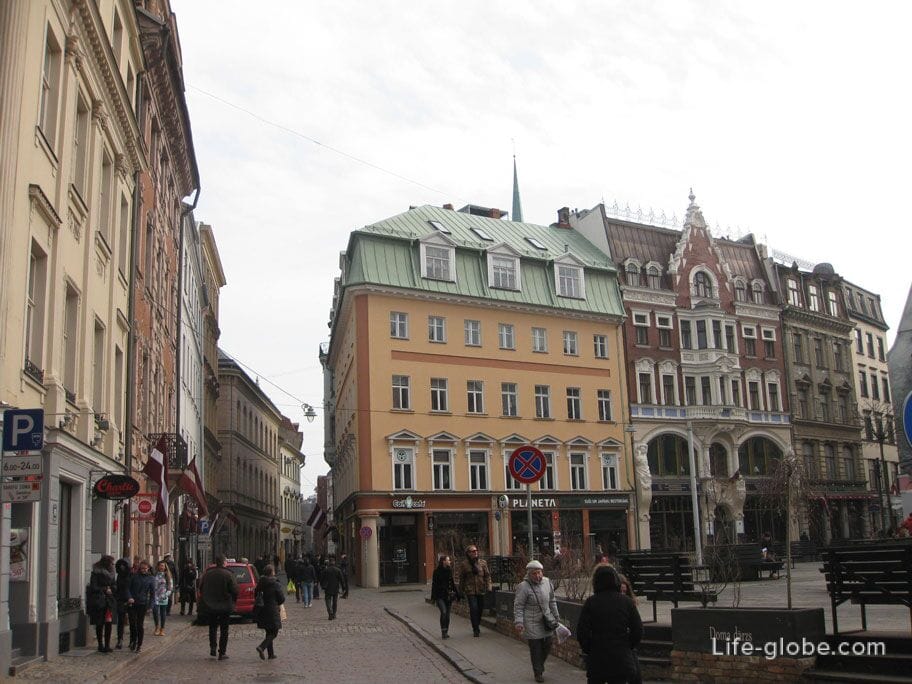 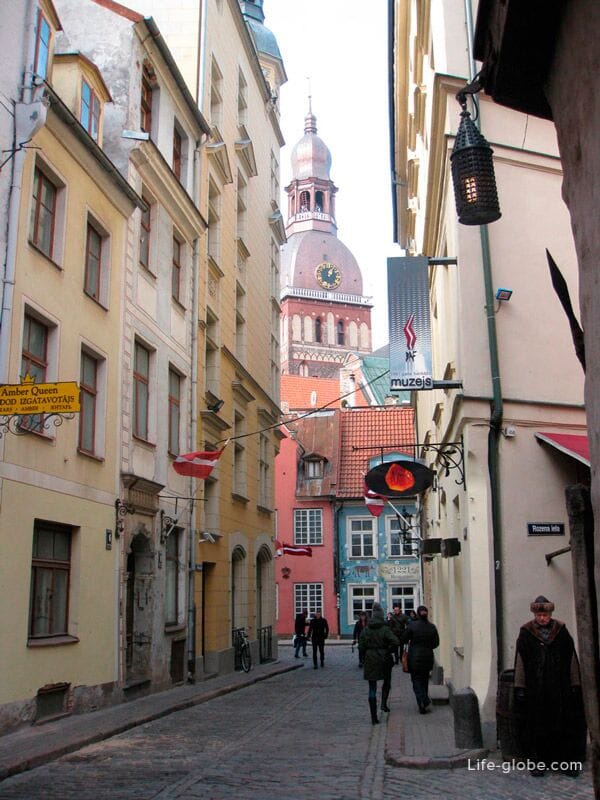 Around the area there are large numbers of luxury houses of the medieval era, an architectural and historical values. The center of which is located opposite the Duomo, is home to the Latvian Radio (Latvijas Radio). House radio something quite reminiscent of the original brick. The building was built in the style of European Neoclassicism, it once housed a Commercial Bank. On the back of it still is attached to the Ministry of Finance. The radio house is located four state radio stations, one of which broadcasts in the Russian language and has the same name "the dome square". 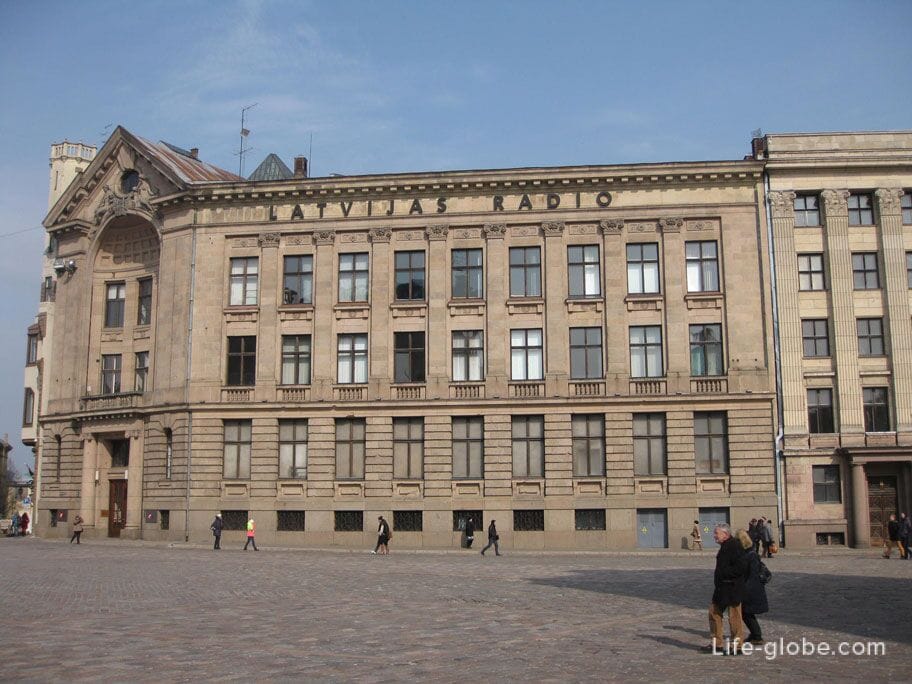 On the Central facade of the house radio is the high relief of the Golden age of ancient mythology, which you can see mom and dad without clothes, wielding the tools of agriculture, and the children holding the crop. All this beautiful arrangement is reflected on the coat of arms of Riga placed on the globe. 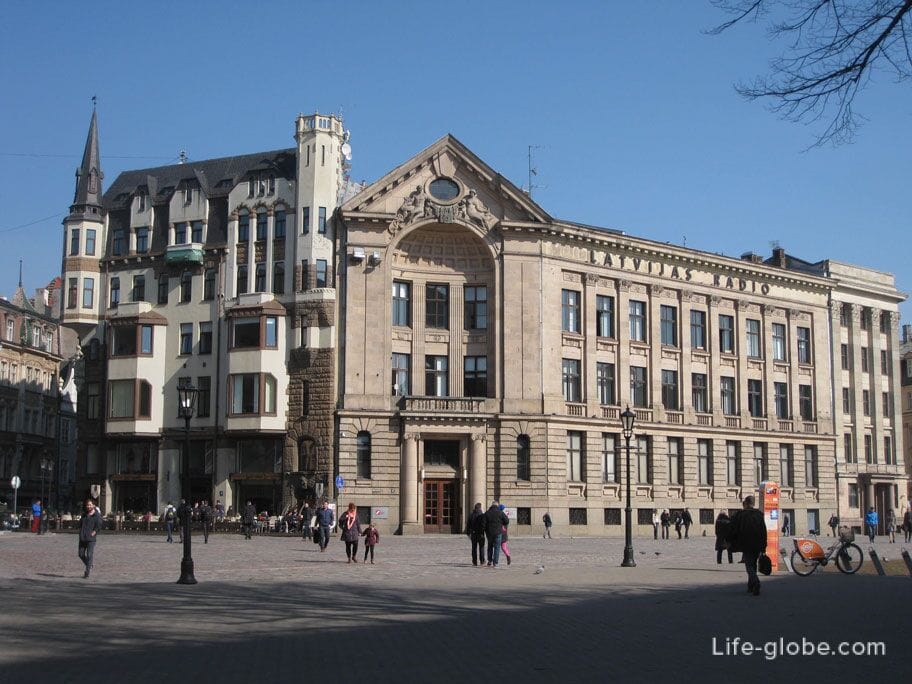 In the photo above, adjacent to the house of the Latvian radio building is the former home of the insurance company "Russia", built in 1906 by architect N. M. Proskurnin.

To the left of the radio house, across the street Jacob, stands the red building is the stock Exchange building, a national monument and was built between 1852 and 1855 years in the forms of the Venetian Renaissance Palazzo. 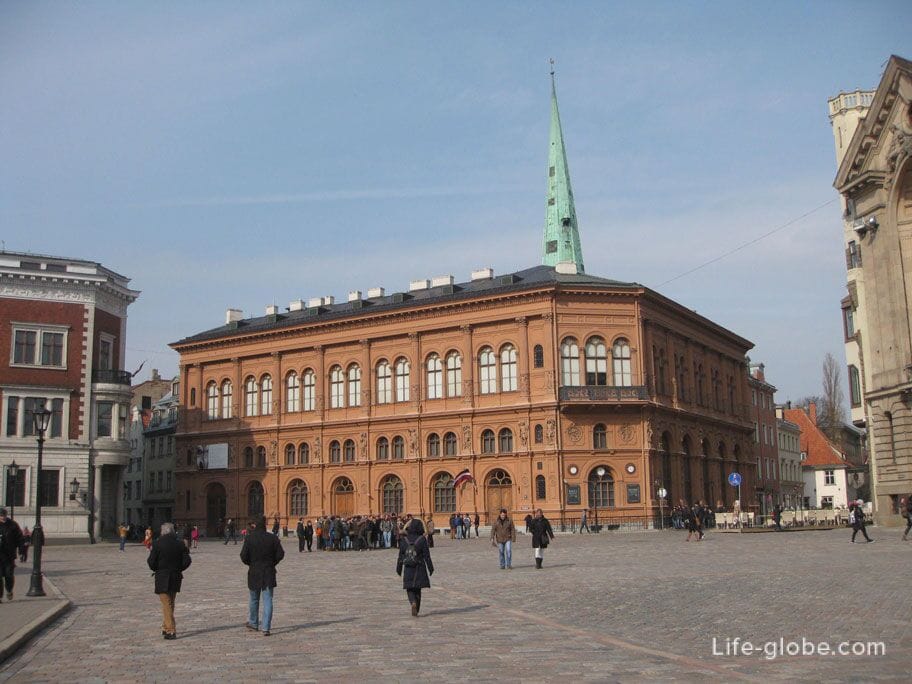 In the photo above, with the building of the Riga stock Exchange, shows the green spire is the spire of the Church of St. Jacob.

In the lobby of the Museum you can see original penalty installation "gondola" parts and hanging from the ceiling, a piece of modern art. 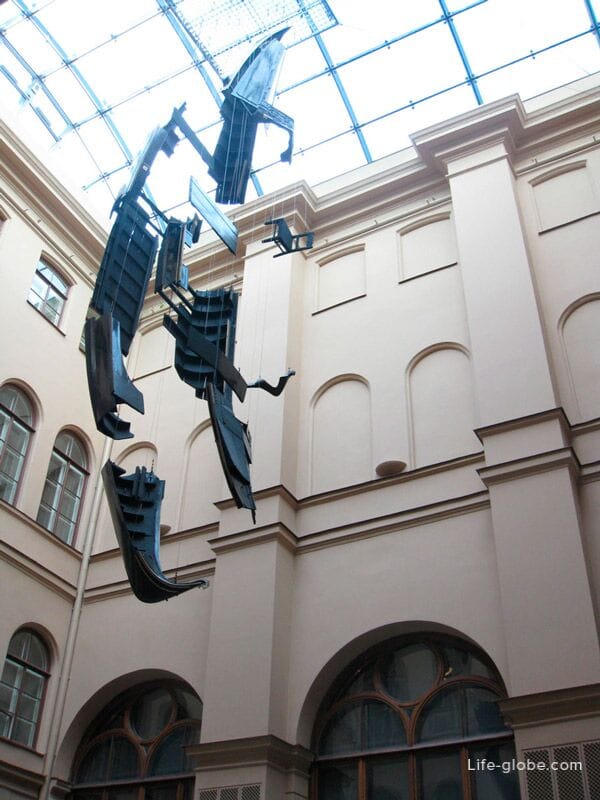 This red and white building nestled near the Duomo and across the street from the Riga stock Exchange, is a Bank building, erected by architect V. Scheel. 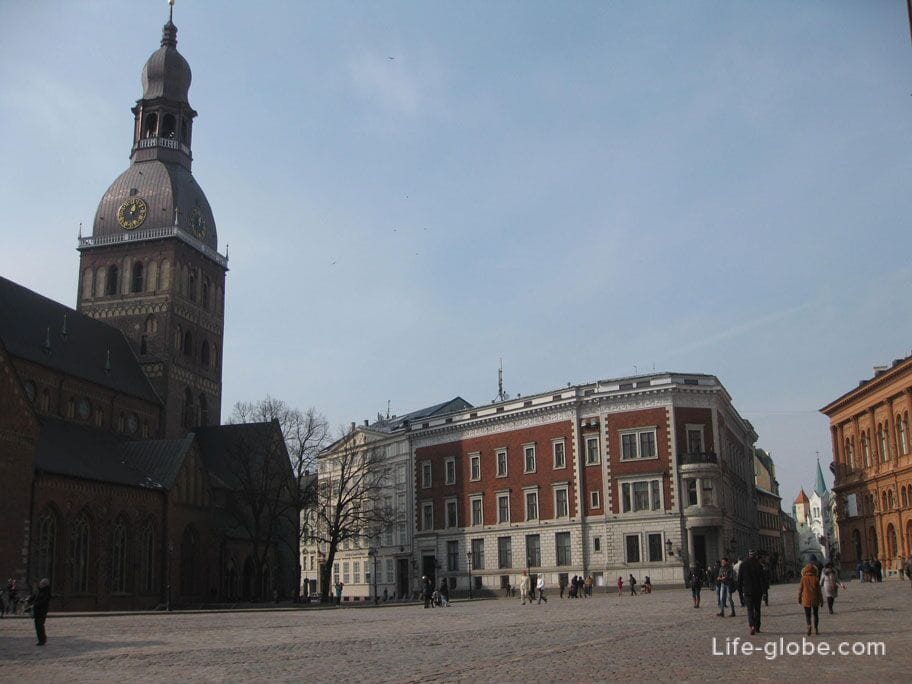 What us the most beautiful element of dome square is the right side from the Cathedral. There are low colorful gingerbread houses that make up the core of the old town. 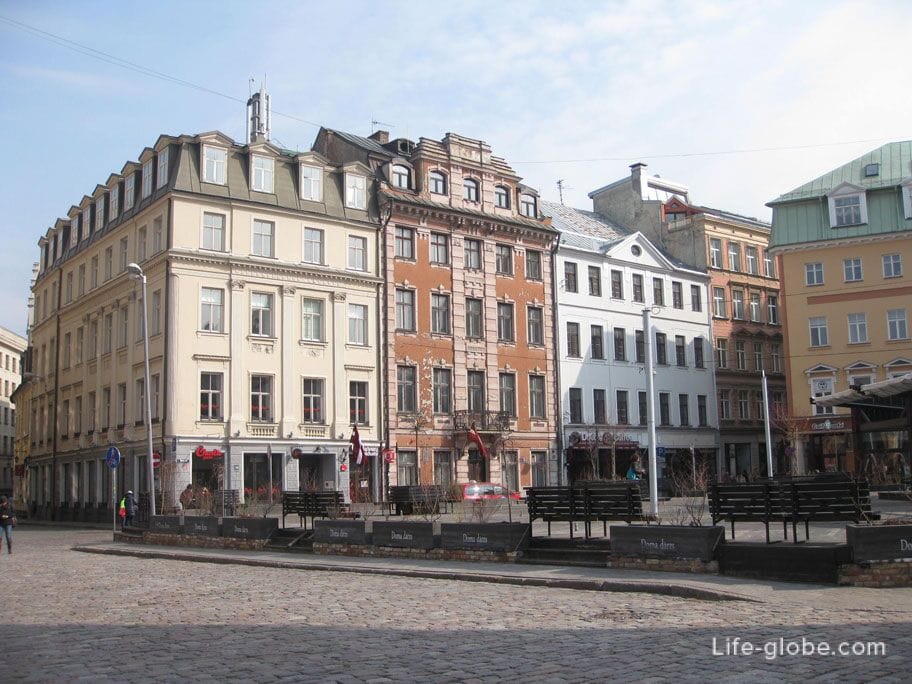 Here originates the legendary Jauniela street (Jauniela). The famous street, however, besides the colorful houses, of course, that it removed a lot of movies. So in the famous TV series "the adventures of Sherlock Holmes and Dr. Watson" street acted as a London street Baker street, and in the television series "Seventeen moments of spring" in the role of the Flower street. So we on this street were able to catch Sherlock Holmes and Dr. Watson, what they really were removed or noted, we don't know but it was fun. Details about the street we'll cover in a future article, read here. 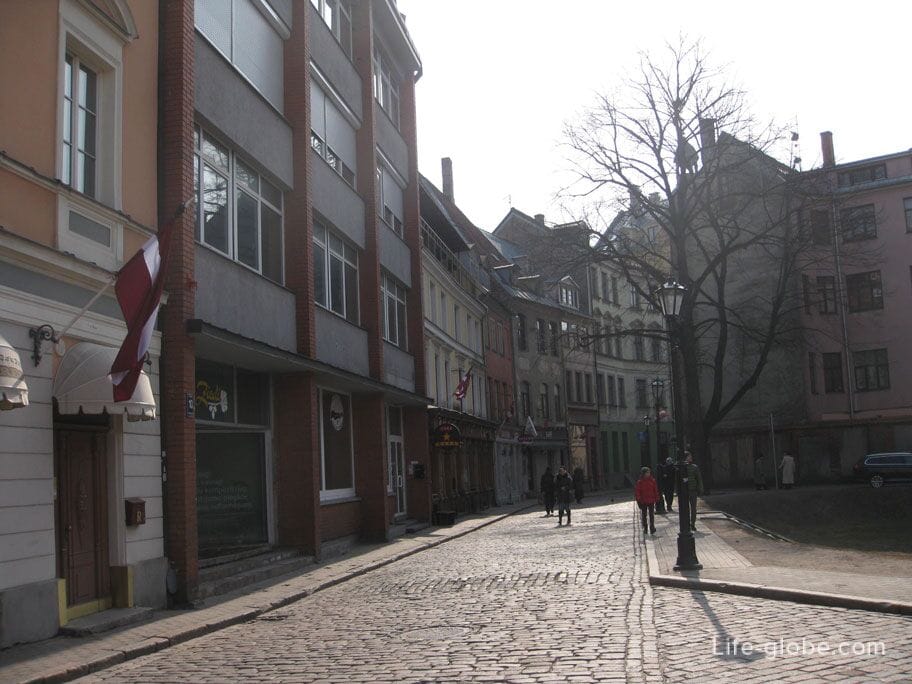 The photo shows the green spire behind the house is the tower of St. Peter's Church. By the way at the top of the tower is an observation deck, which is accessible by a view of the old city is just breathtaking. 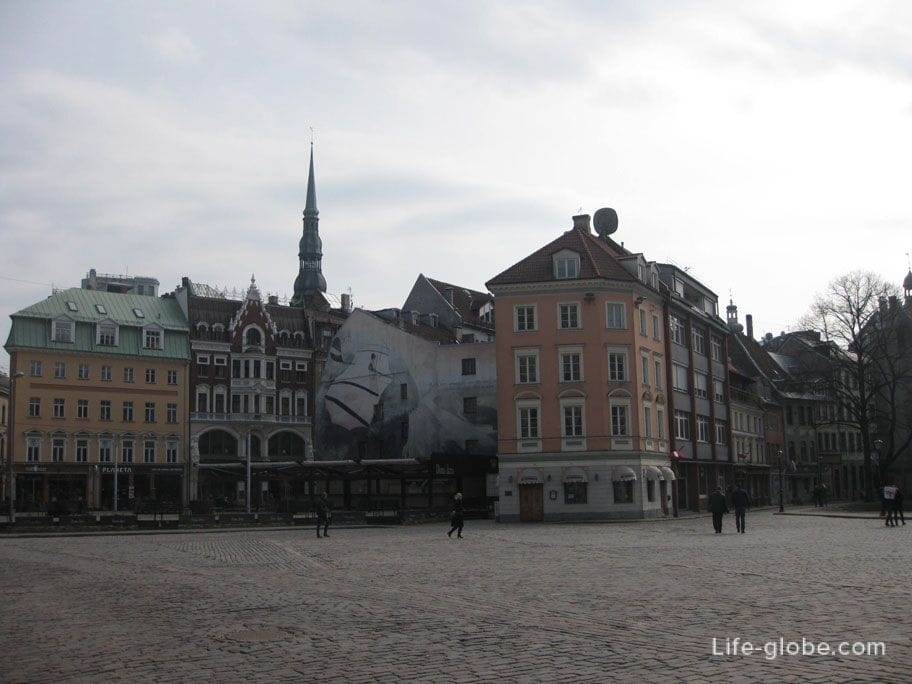 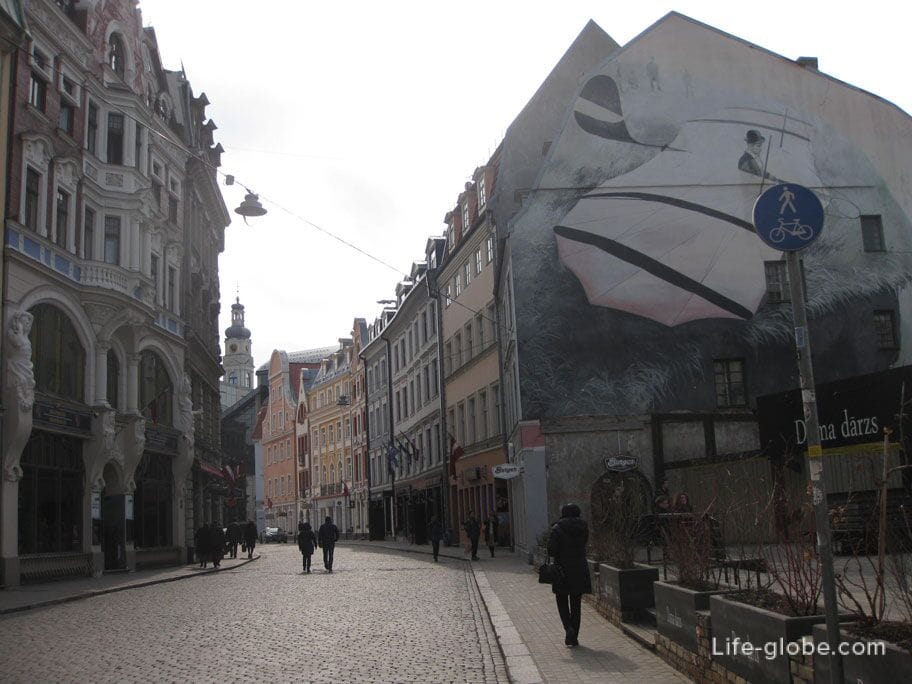 What else can you tell about the Dome Square... it undoubtedly deserves attention and is beautiful in its own way. But for us personally, we prefer green squares or squares with small buildings around the perimeter. But, nevertheless, you should definitely see this famous square and go to the Dome Cathedral. 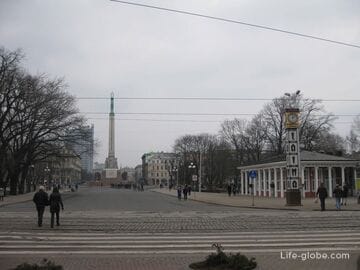 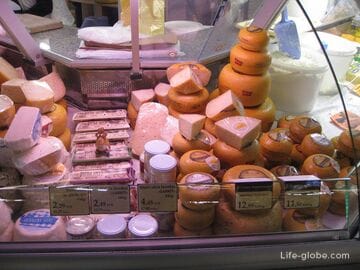 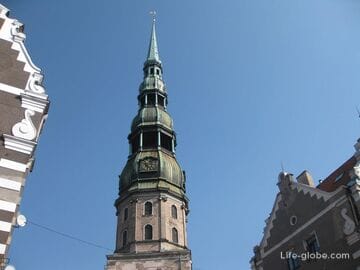