The main church of the country is the Cathedral of Christ the Savior in Moscow. And also, the Patriarch Bridge and the monument to Peter I

The rector of the Cathedral of Christ the Savior is Patriarch Kirill of Moscow and All Russia.

The Cathedral of Christ the Savior in Moscow was built as an object of gratitude to God for his help and intercession during a difficult period in the history of Russia during the Napoleonic invasion during the Patriotic War of 1812. The temple also acts as a symbol and monument to the Russian people for their courage and heroism shown during the armed actions.

The temple was erected according to the project of architect K.A. Ton, on May 26, 1883. The construction of the church lasted almost 44 years, the first stone was laid on September 23, 1839. After, in the midst of Stalin's reconstruction of the city on December 5, 1931, the temple building was destroyed. It was rebuilt only in 1994-1997. It is this Temple, newly erected in the 90s in the pseudo-Russian style, that we see at the present time. 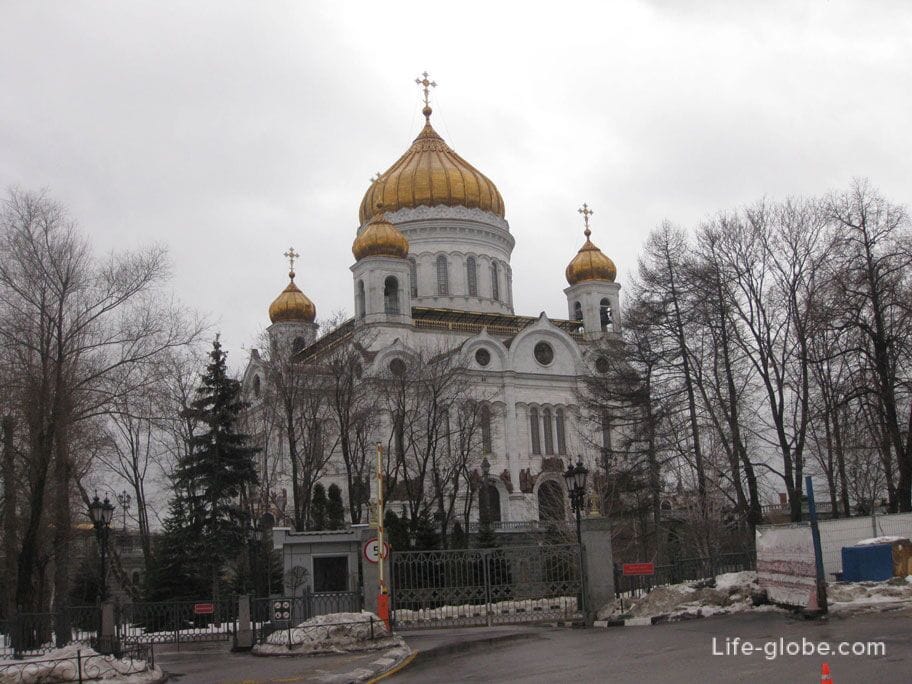 All major anniversaries and celebrations have been held and are being held in the Cathedral of Christ the Savior. This Temple is one of the main attractions of the city, it is an integral part not only of the religious life of Moscow, it also serves as part of the culture and socio-political life of the whole country. The official website of the Cathedral of Christ the Savior in Moscow: xxc.ru .

The most beautiful view of the Cathedral of Christ the Savior opens from the Patriarchal Bridge. It is from this point that you can see the Temple in all its glory, without any slopes or angles. 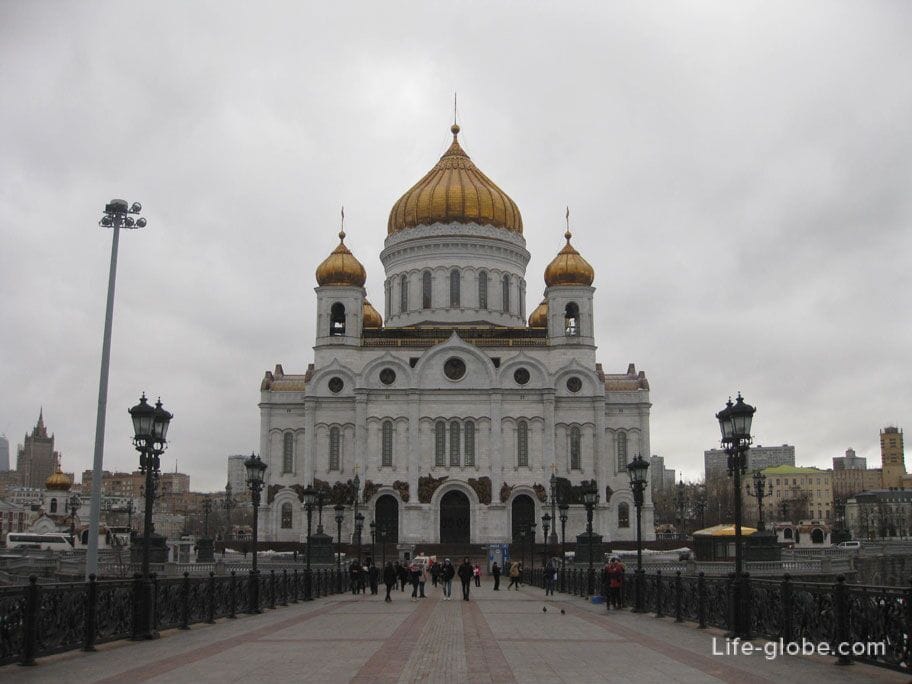 By the way, the Patriarchal Bridge in Moscow is also among the top ten main attractions of the city. This is a pedestrian bridge crossing the Moskva River and connects the Prechistenskaya and Bersenevskaya embankments, then the bridge runs through Bolotny Island, crosses the Drainage Channel and ends at the Yakimanskaya Embankment. The Patriarch's Bridge was built according to the project of architect M. Posokhin, artist Z. Tsereteli, engineers A. Kolchin and O. Chemerinsky, opened in 2004. 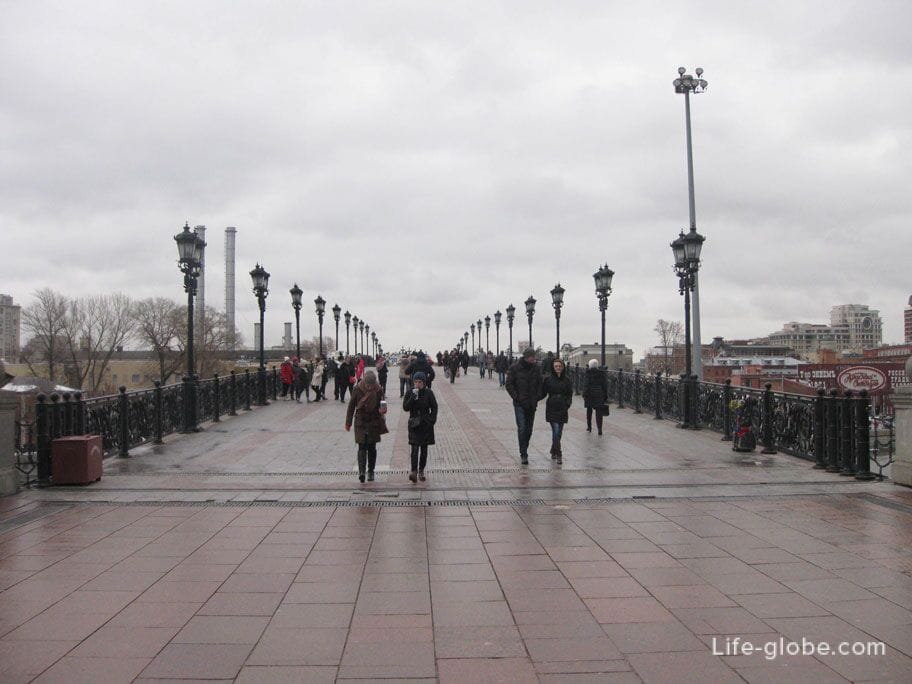 The Patriarch's Bridge is a favorite walking place for guests and residents of the city. On it, lovers make dates, and the couple are photographed and hang up "love locks". There are a huge number of these love locks on the railing of the bridge, there are small locks and large barn locks, and original personalized custom-made ones. Since the bridge is so visited, then the entrepreneurs of the city did not ignore it. All over the bridge, here and there, they offer to release pigeons, for a fee, of course. There are so many of these "pigeon magnates" on the bridge and they are so intrusive that it is rather annoying.

From 2008 to 2011, New Year's addresses of Russian President Dmitry Medvedev were recorded on the bridge. 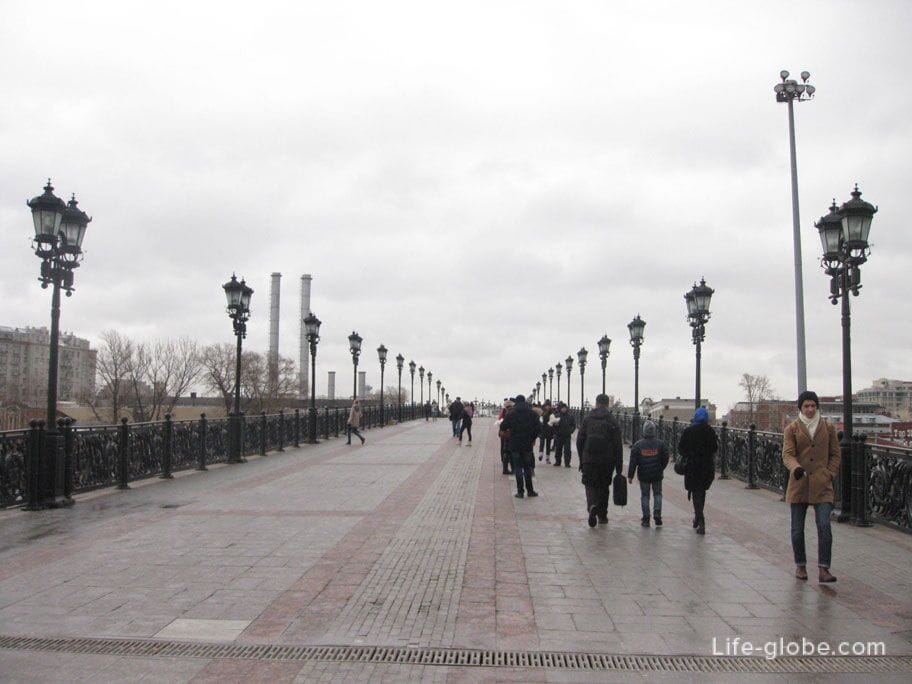 From the Patriarchal Bridge, you can see the building of the Red October chocolate factory and the monument to Peter I. The monument to Peter the Great in Moscow is one of the tallest monuments in Russia, its total height reaches 98 meters. The official name of the monument is a monument commemorating the 300th anniversary of the Russian Navy. It was erected in 1997 by order of the Moscow Government on an artificial island, built at the separation of the Moskva River and the Drainage Channel. 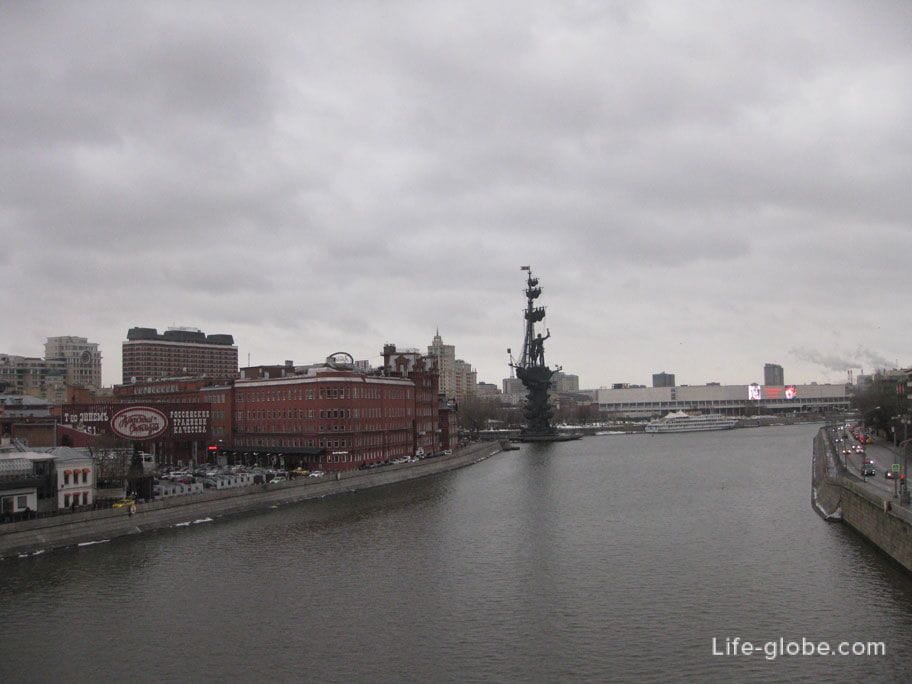 On the other side of the Patriarchal Bridge, you can see the Kremlin Embankment, the Kremlin Wall and the buildings of the Kremlin complex - the State Kremlin Palace, the Annunciation and the Archangel Cathedrals. 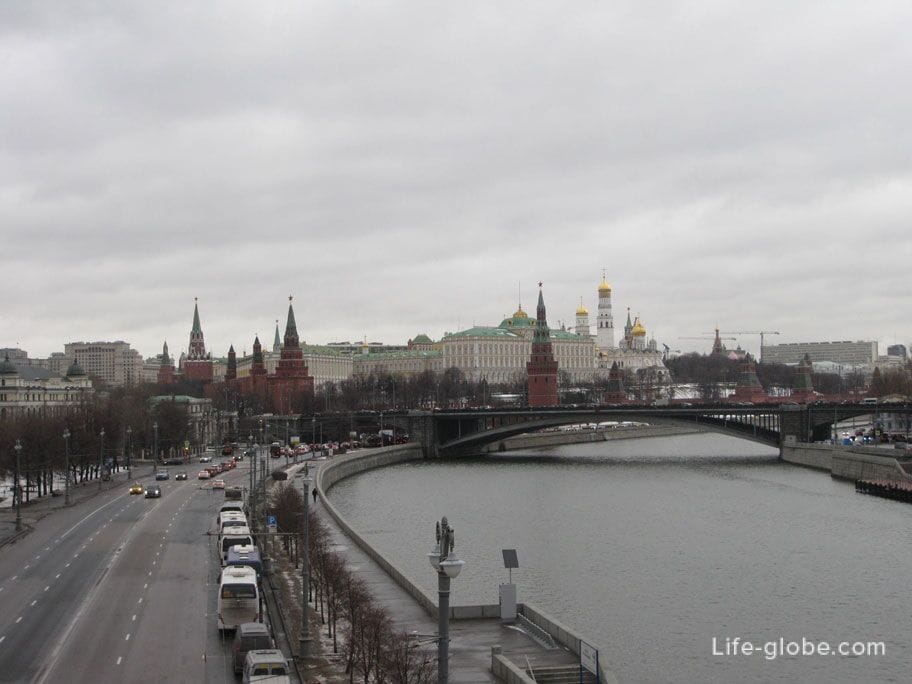 View of the city from the Patriarch's Bridge 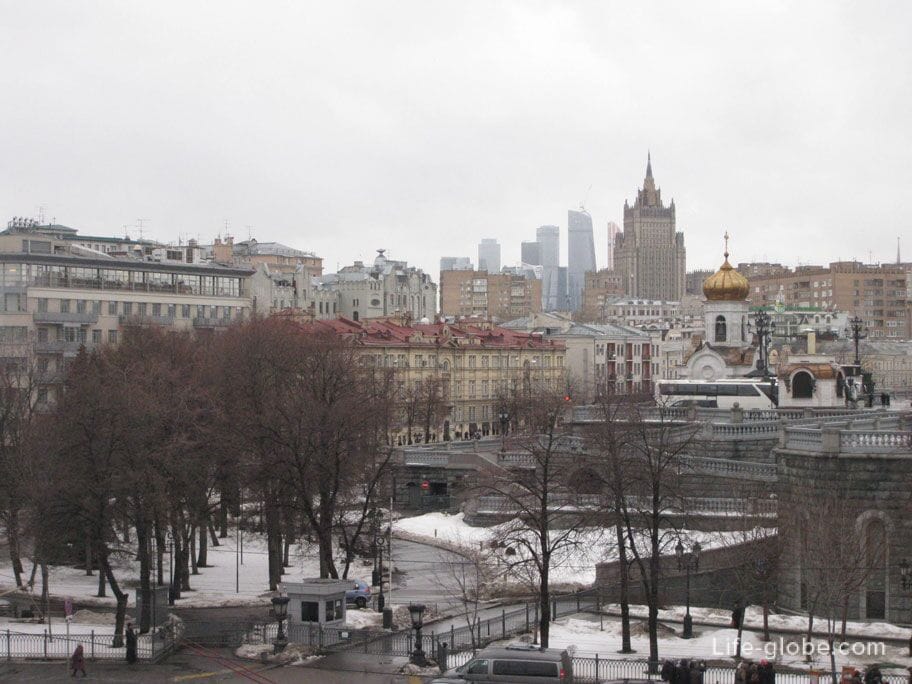 We will not go far from the main topic of this article and return to the Cathedral of Christ the Savior.

The Cathedral of Christ the Savior in Moscow is the largest cathedral of the Russian Orthodox Church, its capacity is up to 10,000 people. The outer part of the cathedral is decorated with a number of marble high reliefs, and the main decoration is the golden domes with crosses crowning them.

The temple has 4 bells: A large Solemn one, its mass is 29.8 tons, you can hear its ringing only 4 times a year on the greatest Orthodox holidays, Festive, its voice can be heard on the days of the twelve-hundredth holidays, a Polyeleum weighing 9.2 tons and a 5-ton Weekday.

This monumental structure, especially its golden domes, is clearly visible from many places in Moscow. This is due to the fact that the Cathedral is located on a hill.

From different angles, such dissimilar views of the Cathedral of Christ the Savior and its auxiliary buildings open up. 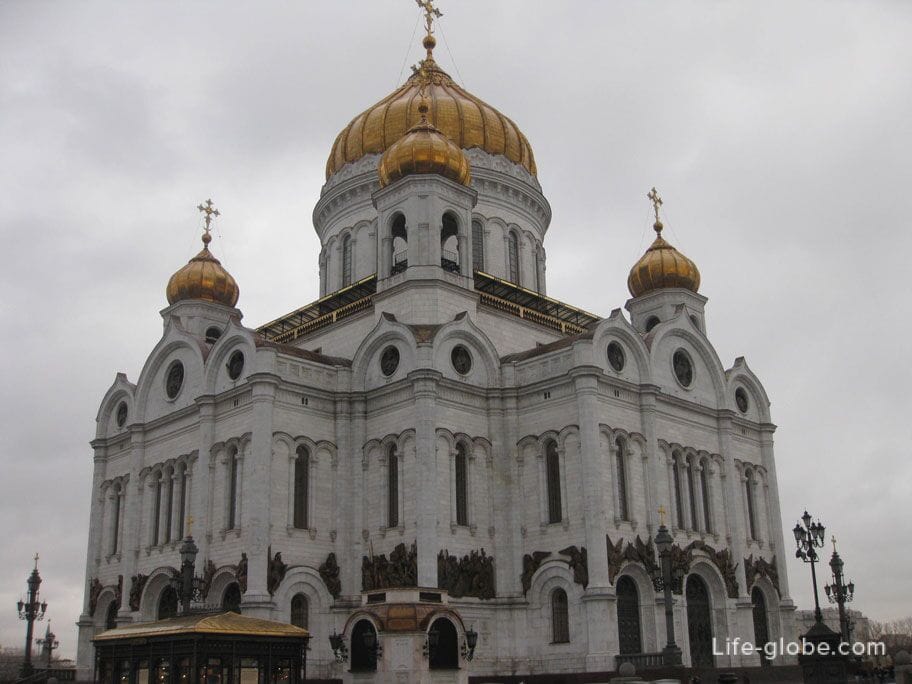 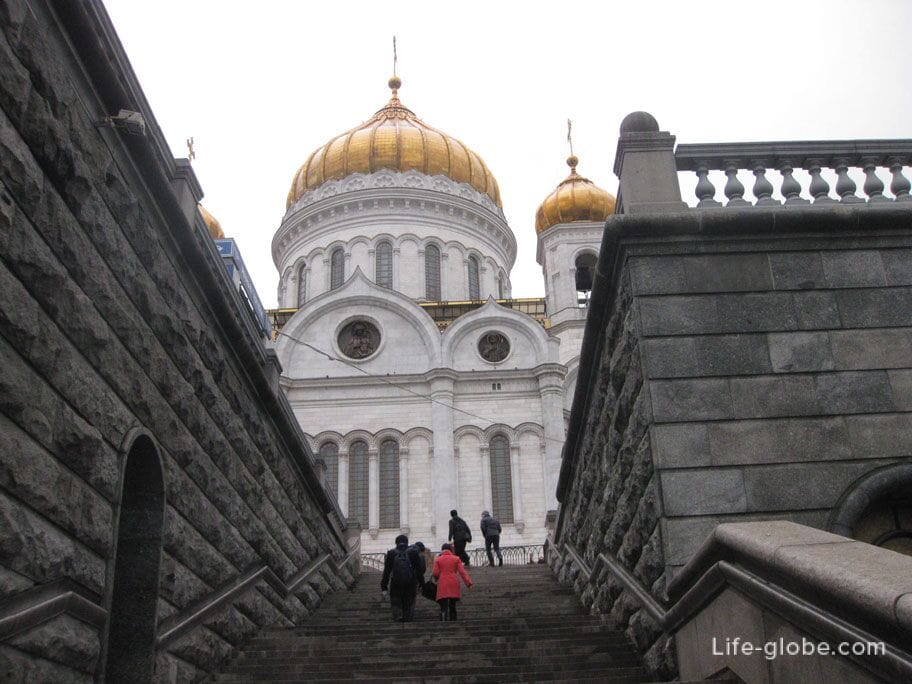 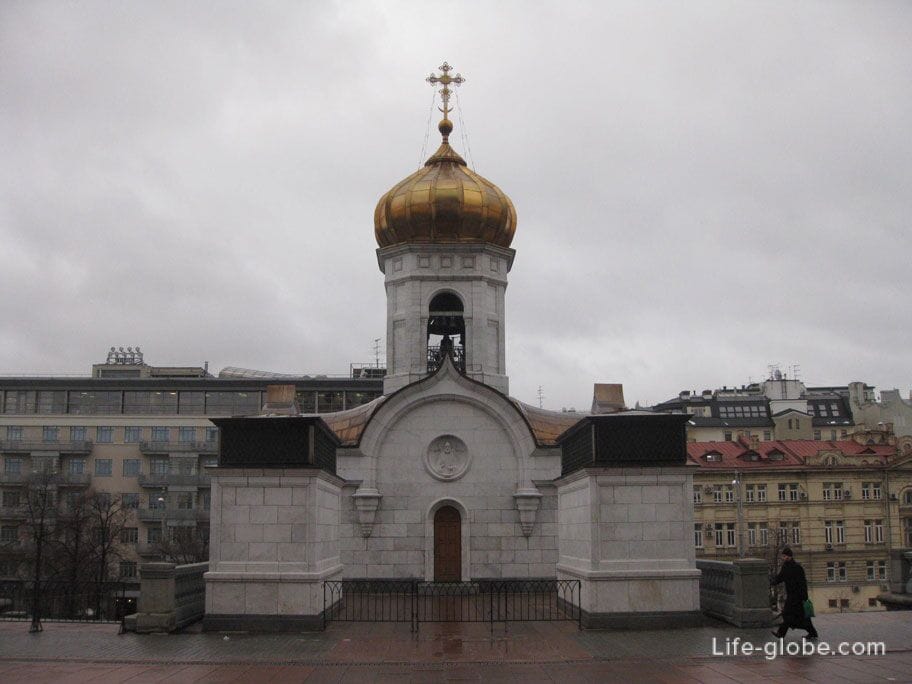 The Cathedral of Christ the Savior has several entrances and exits, the main one from Volkhonka Street. It is from this street that you can get to the temple. 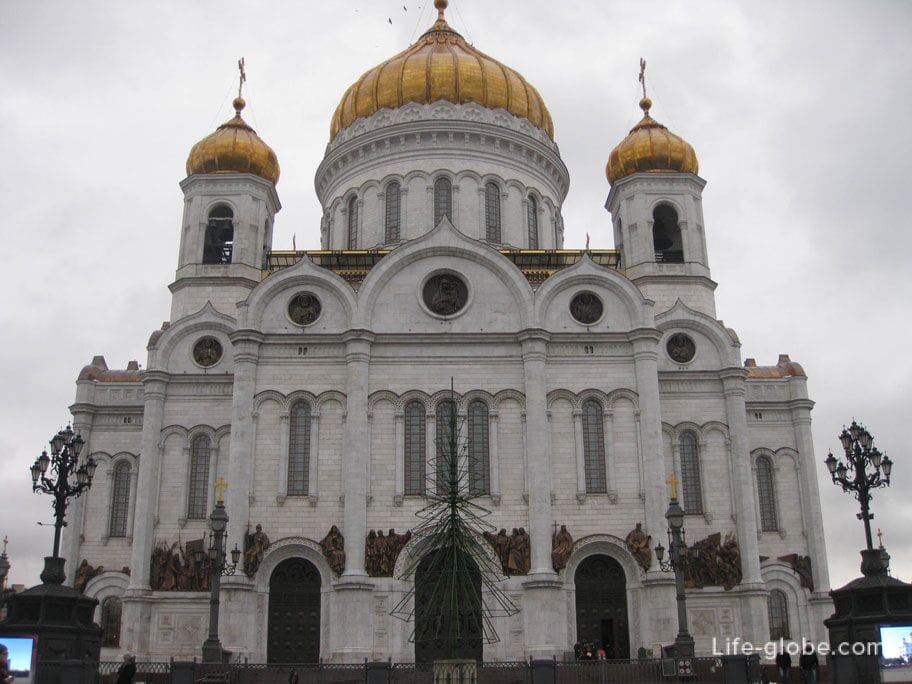 Entrance to the Cathedral of Christ the Savior is free, free of charge. Passage through security and metal detectors. It is forbidden to shoot and photograph in the Temple, so there are no photos of the interior decoration. But to tell, we will tell.

Inside, the Cathedral of Christ the Savior has high walls with vaulted ceilings, completely painted with colored paintings and the faces of saints. Rich colorful decoration, predominance of red and gold colors. The Temple has several floors and many halls. There are souvenir shops. The Museum of the Cathedral of Christ the Savior, admission is free, excursions are paid. The museum is based on materials telling about the history of the construction, destruction and reconstruction of the Cathedral. The museum is a kind of monument in honor of the victory in the Patriotic War of 1812. And the gallery of military glory, here on marble plaques all the main events of the battles are listed in chronological order and fragments of preserved memorial plates with the names of heroes are presented.

Our personal opinion about the Cathedral of Christ the Savior. Big? Yes, big, massive and eye-catching! Handsome? We don't think. The feeling of the Interior decoration is too much, it's rippling in my eyes, as if I got into a tastelessly furnished museum. What was really beautiful in the Temple was the high vaulted painted ceilings. We admired them from the bottom of our hearts.

The complex of the Cathedral of Christ the Savior in Moscow

Transfiguration Church of the Cathedral of Christ the Savior in Moscow

The Transfiguration Church of the Cathedral of Christ the Saviour was built in memory of the women's Alekseevsky Monastery located on this site. The interior of the church corresponds to the time of the foundation of the monastery, that is, the sixteenth century. The church has three altars: the main one, in honor of the Transfiguration of the Lord and two small chapels, in honor of Alexy the man of God and the Tikhvin Icon of the Mother of God.

The consecration and opening of the Transfiguration Church took place on August 19, 1996.

The main shrines of the Transfiguration Church are the icon of the Savior Not Made with Hands by the artist Sorokin, miraculously preserved after the destruction of the Temple, the ancient icon of the Mother of God Smolenskaya and the icon of St. Nicholas, which was previously in the church of the city of Bari.

This small wooden chapel is located not in the temple itself, but a little further away, but near the Temple, below its level.

The place of the main holy Chapel of the Mother of God is occupied by the icon of the Theotokos "Sovereign", found in the twentieth century. It is this icon that has become one of the main shrines in modern Russia. 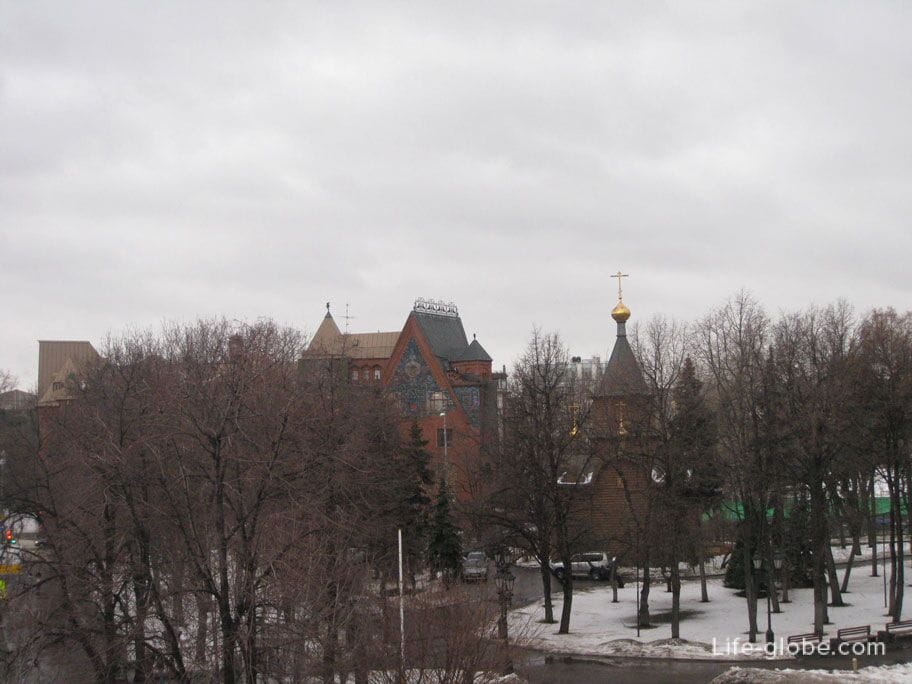 Next to the Chapel of the Sovereign Icon of the Mother of God, you can see a beautiful building, this is the Pertsov house. An apartment house in Moscow, located on the corner of Soymonovsky Passage and Prechistenskaya Embankment, built in 1905-1907 by architects N.K. Zhukov and B.N. Shnaubert based on sketches by artist S.V. Malyutin, author of the Russian matryoshka doll. Russian Russian matryoshka dolls and teremki from Russian folk tales are somewhat reminiscent of the house itself.

Pertsov's house is made in the Art Nouveau style. In the design of the teremki-balconies, motifs of ancient Russian decor are used, which are organically combined with elements of Western European medieval architecture. The decoration of the facade of the building shows the shapes of bizarre mythological creatures, fabulous animals and plants. As well as carved decorations on the windows and walls of the house. A kind of house-teremok from a fairy tale, which has found its place and so harmoniously fits into the architecture of modern buildings in the very center of the Russian capital. 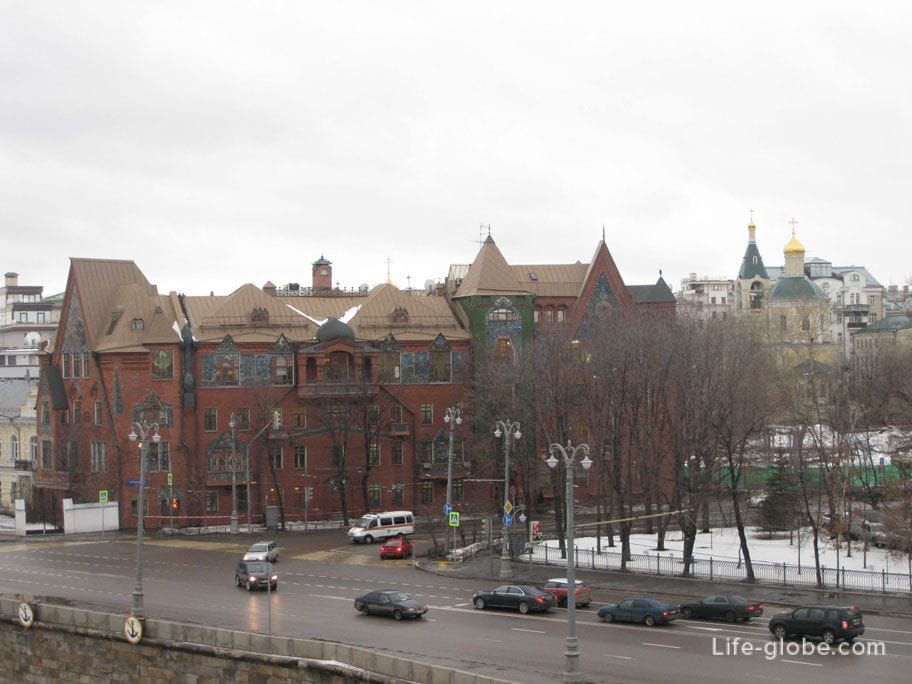 The Temple Foundation has developed and conducts the following excursions:

- High reliefs of the Cathedral of Christ the Savior with access to viewing platforms.

- Paintings of the gallery of the Lower Temple (parables), ascent to the observation decks.

- The Cathedral of Christ the Savior with access to viewing platforms, Choirs.

The cost of group excursions starts from 400 rubles per person. Groups of 10 people or more.

The official website of the Christ the Savior Cathedral Foundation: fxxc.ru .

Status of the Cathedral of Christ the Savior in Moscow

In church-administrative terms, the church has the status of a compound of the Patriarch of Moscow and All Russia. The daily duties of the rector are performed by the clerk Archpriest Mikhail Ryazantsev. 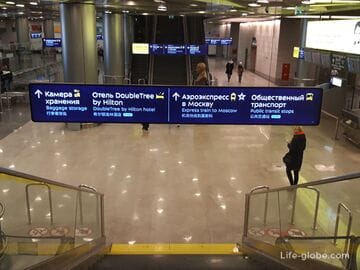 How to get from Vnukovo airport to the c... 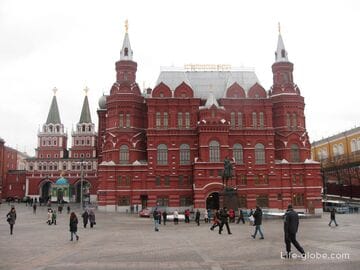