The way to the peaks is an excursion route available all year round with walking tickets (visiting without riding) for climbing on cable cars to the most visited and famous height of the Rosa Khutor mountain resort - Rosa Peak, located at an altitude of 2320 meters above sea level.

This route is available during the winter season for guests and on ski passes.

It should be noted that the height of Rosa Peak is also available in the winter season by ski passes, and in the summer and off-season-only by walking tickets.

Rosa Peak is located on the Aibga ridge and at an altitude of are: an observation deck and observation points, a high-altitude restaurant, ski slopes and lifts, toilets, a first aid station,as well as some entertainment. 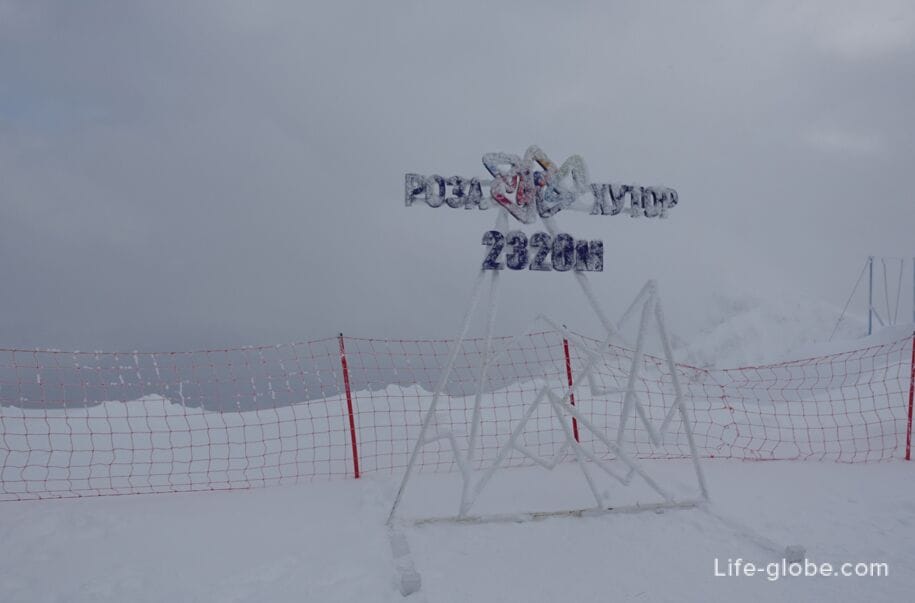 Walking tickets "The Way to the peaks"

The ascent to Rosa Peak using walking tickets is carried out in three stages.

So, in order to climb Rosa Peak on walking tickets, it is necessary to drive along the slopes of the ridge on three cable cars, which can also be used by skiers and snowboarders on ski passes.

All three cable cars are comfortable gondola lifts (closed cabins with seats inside, with a capacity of up to 8 people).

When climbing on cable cars from the cabins, you can enjoy beautiful views of mountain heights and lush vegetation.

During the ascent on the cable cars, guests make transfers at two intermediate stations, where there are various entertainment, services and trails for those who ski and snowboard. Therefore, the route to Rosa Peak can become not only a walk on the cable cars, but also a wonderful pastime - you can walk at the stations and enjoy entertainment and all services. 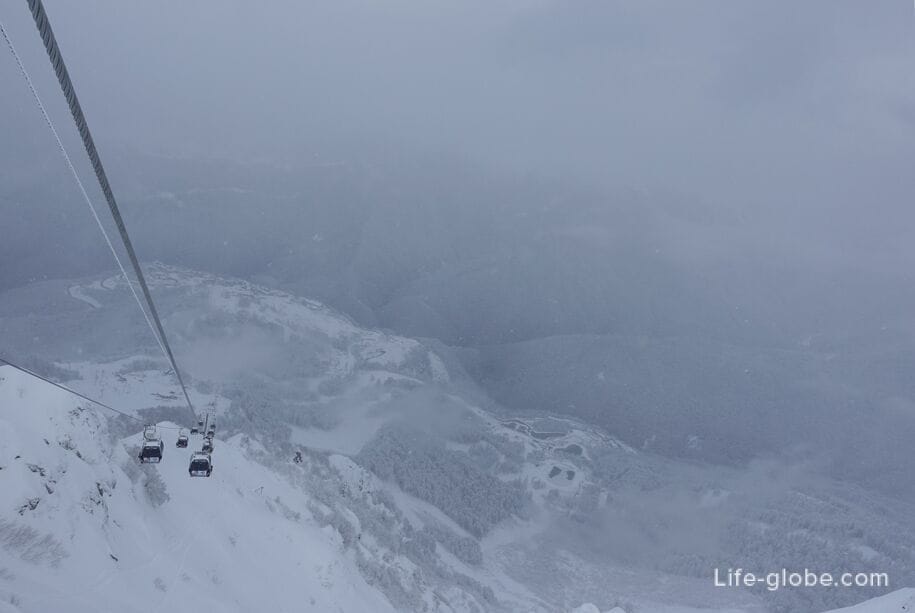 Stages of the ascent to Rosa Peak (three stages)

The first stage of the ascent to Rosa Peak 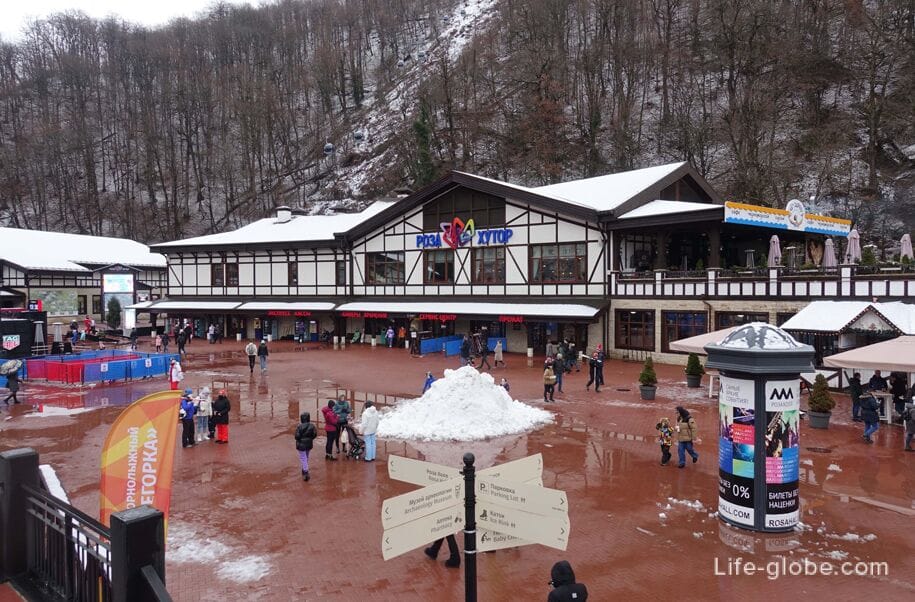 The Olympia cable car runs from the lower station, which lifts guests to the "Rosa Plato" (Mountain Olympic Village) at an altitude of 1170 meters above sea level.

The length of the Olympia cable car is 2341 meters, and the capacity is 2709 people per hour. More about the Olympia Cable Car… 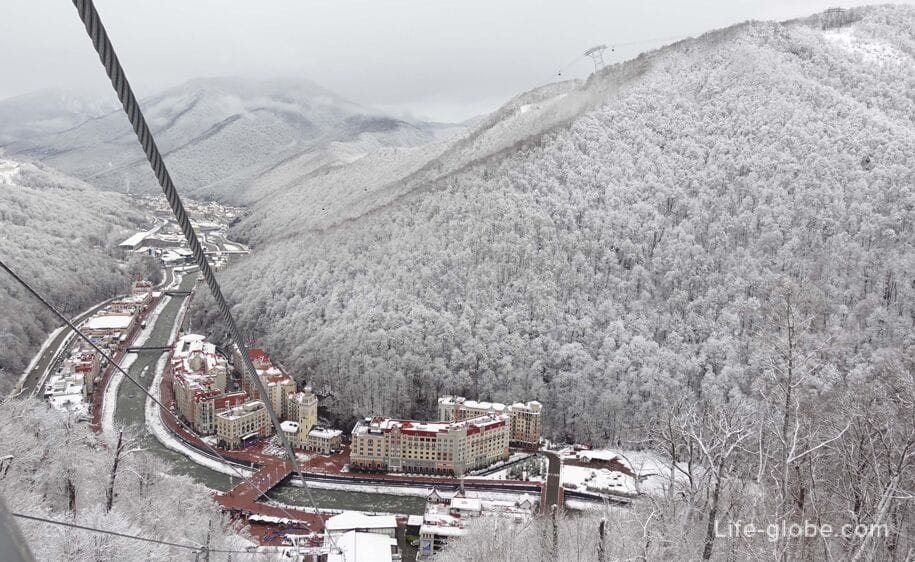 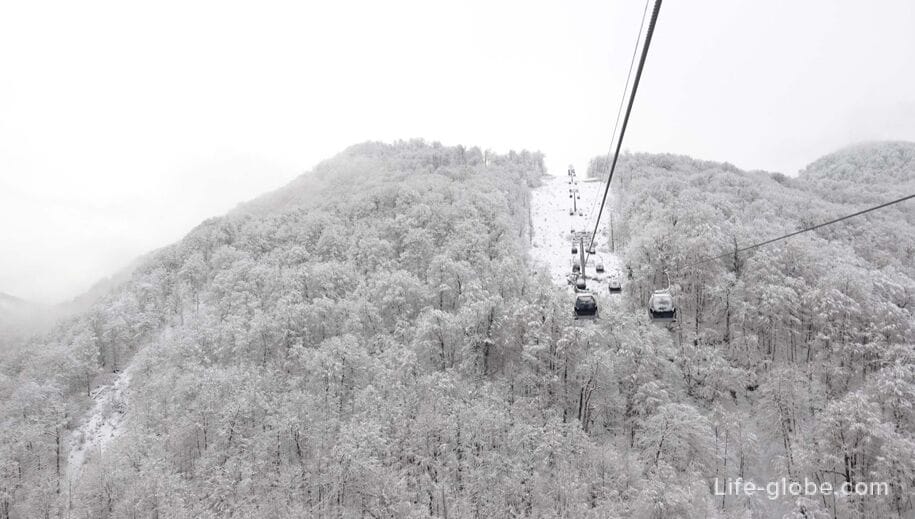 On the Rosa Plateau there are: observation points and observation platforms, places for walking and recreation, ski slopes and lifts, a training slope, a rodelban, helicopter rides, cafes and restaurants, toilets, ticket offices, a medical center, rental of ski equipment and an instructor service.

In winter, it is also: winter tubing, evening sledding.

In summer: + hiking and cycling routes.

). For those who live on the Rosa Plateau, the start on the Rosa Peak will start from this mark. Learn more about the Mountain Olympic Village... 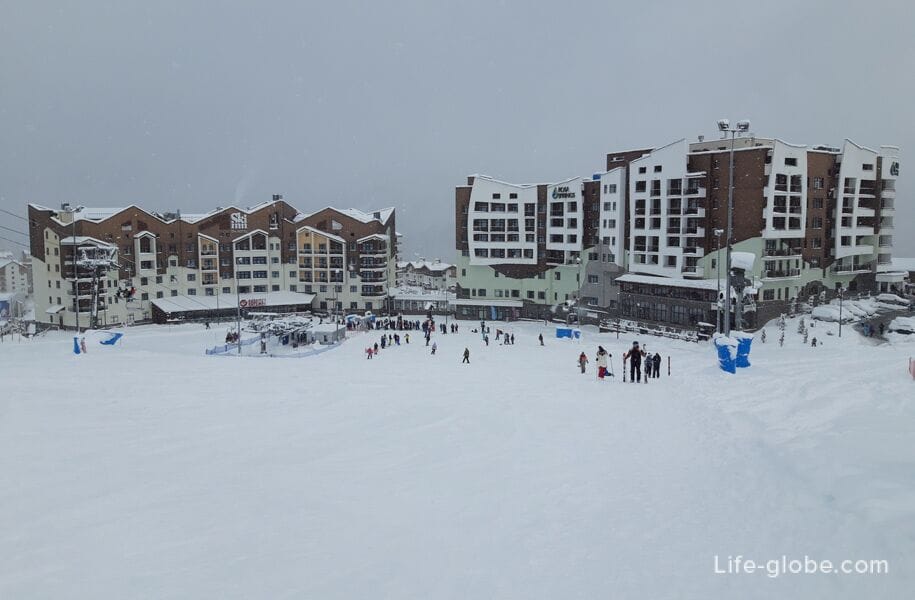 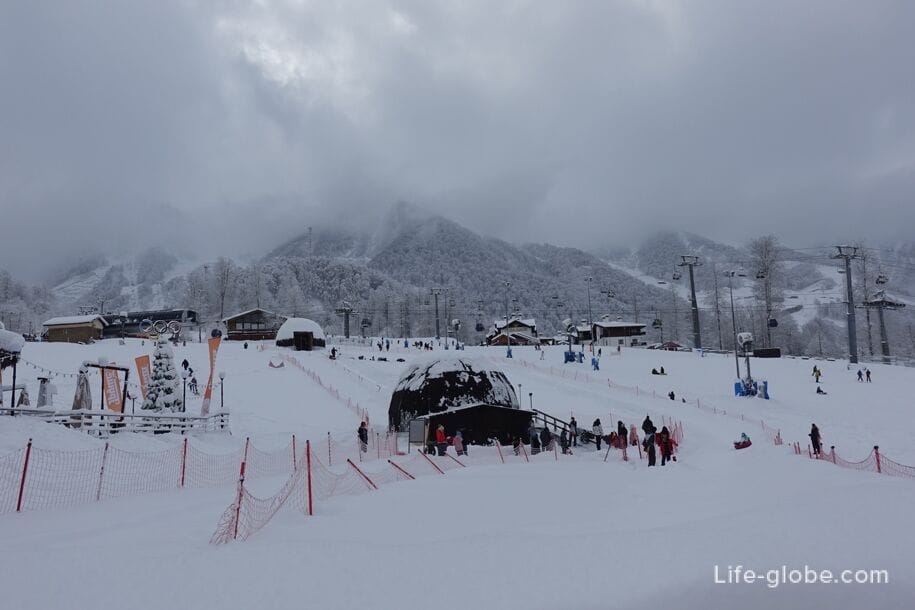 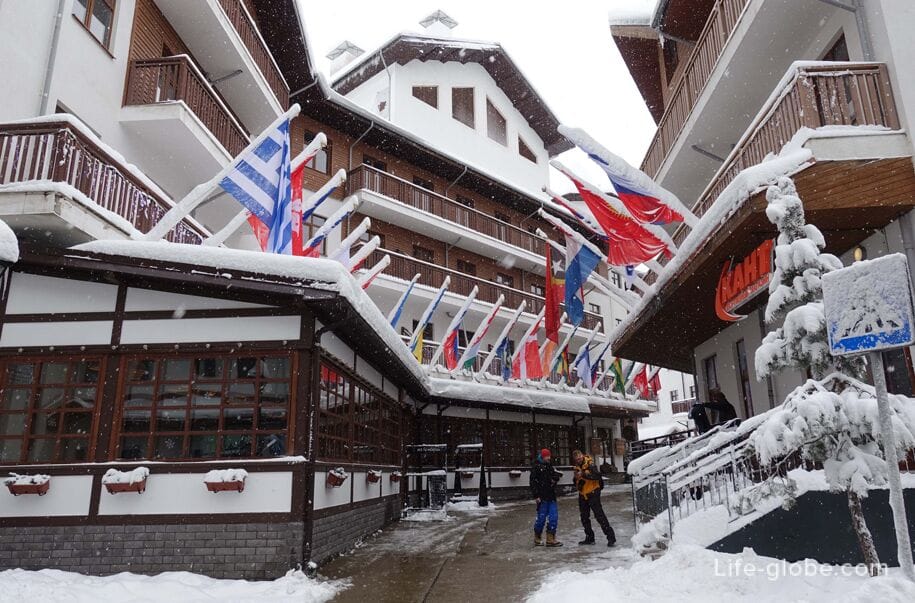 The second stage of the ascent to Rosa Peak

On the Rosa Plateau, you need to transfer to the cable car "Reserved Forest", which lifts guests to the station" Gazebo", located at an altitude of 1350 meters above sea level.

The length of the Reserved Forest cable car is 1541 meters, and the capacity is 2442 people per hour. More about the Zapovedniy les Cable Car… 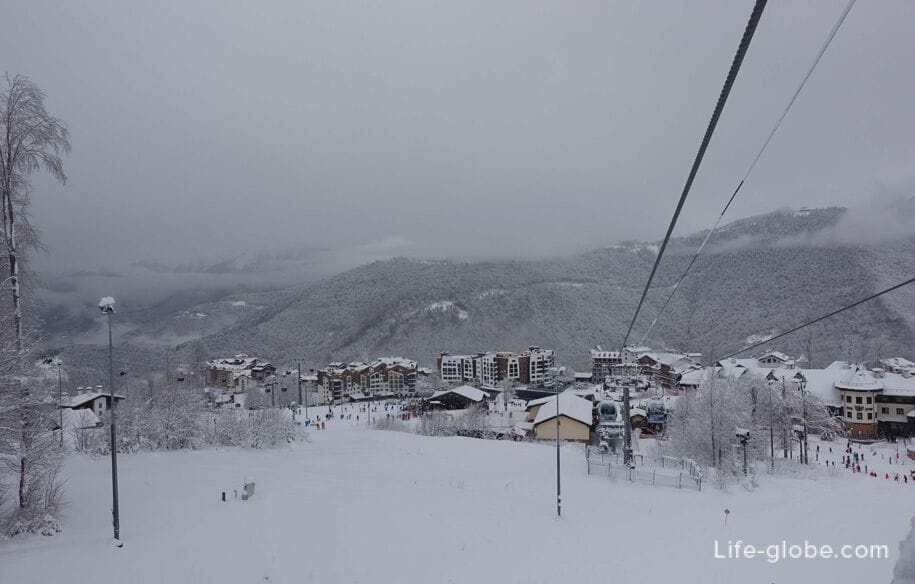 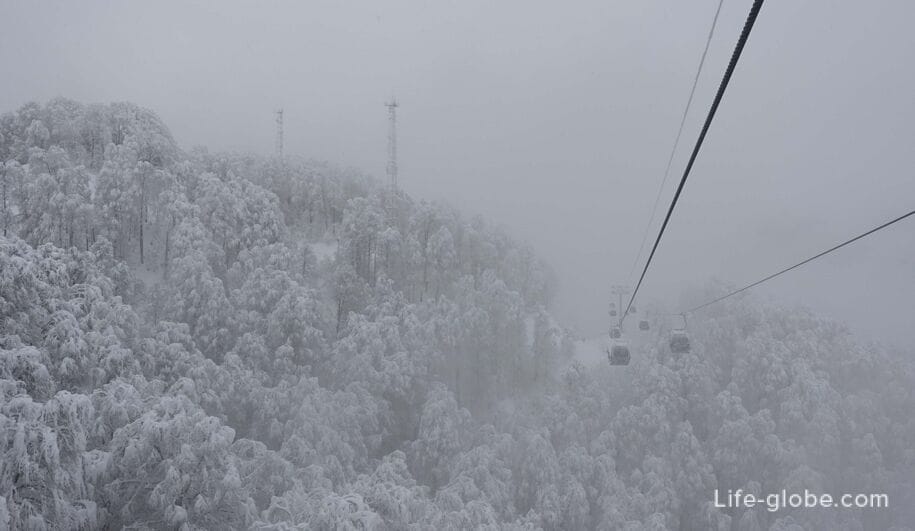 At the station "Gazebo" there are: observation points, places for walking and recreation, ski slopes and lifts, an information center, cafes, toilets and a medical center.

In the summer season, these are hiking trails and a family amusement park with a rope park, a troll and an attraction - the Yeti Park mine, located near the station. Learn more about the Besedka station… 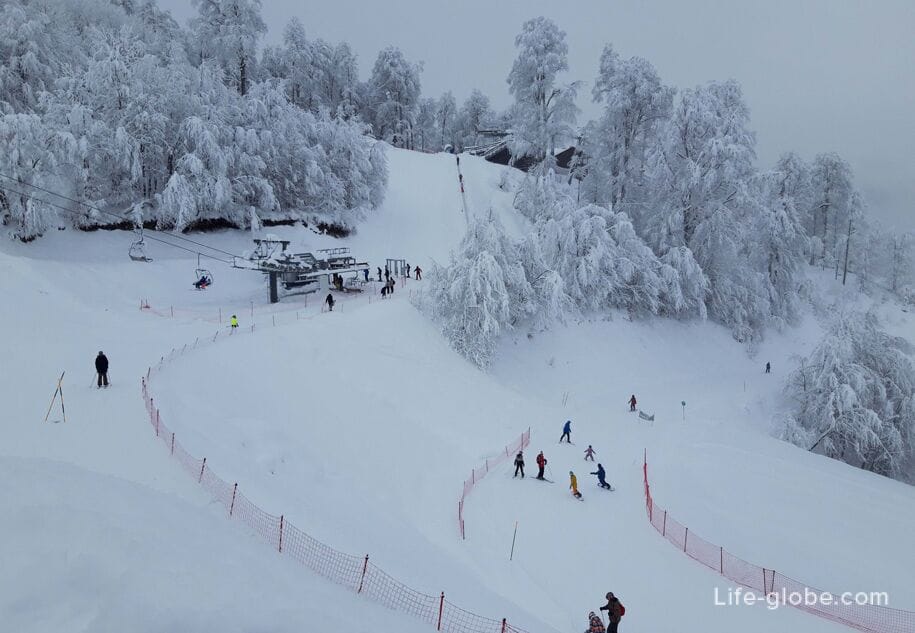 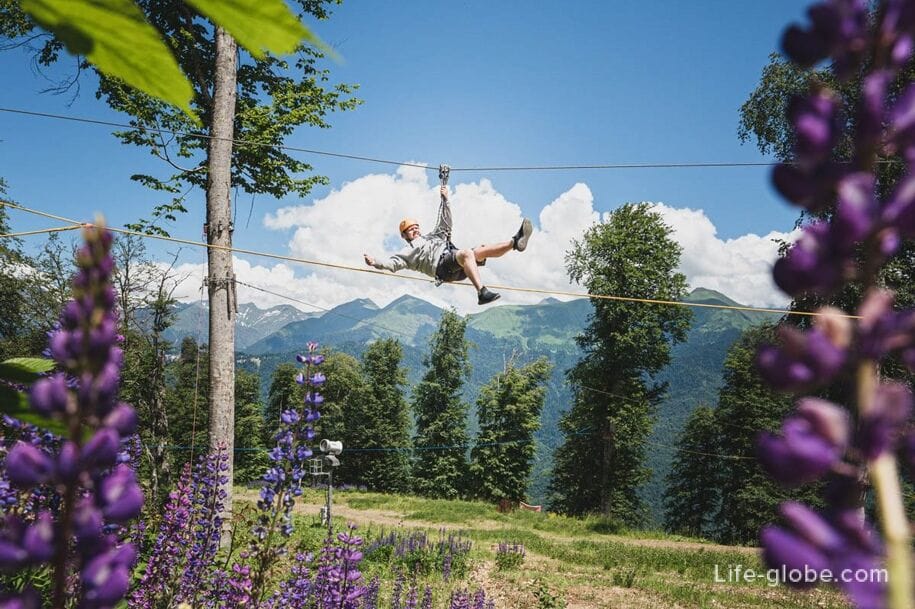 The third stage of the ascent to Rosa Peak

At the Arbor station, you need to transfer to the Caucasian Express cable car, which lifts guests to the Rosa Peak platform.

The length of the Caucasian Express cable car is 2141 meters, and the capacity is 2384 people per hour. More about the Kavkazskiy express Cable Car… 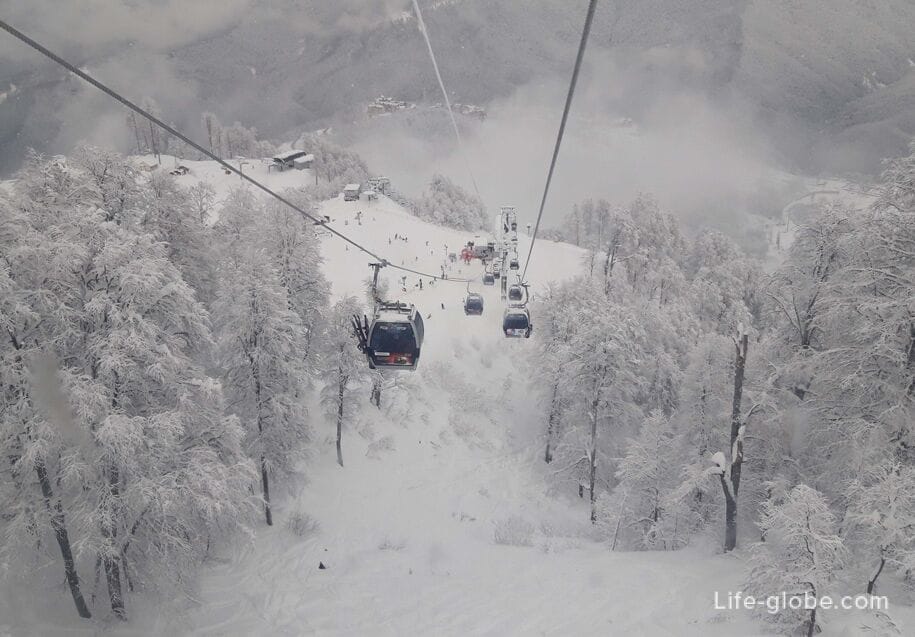 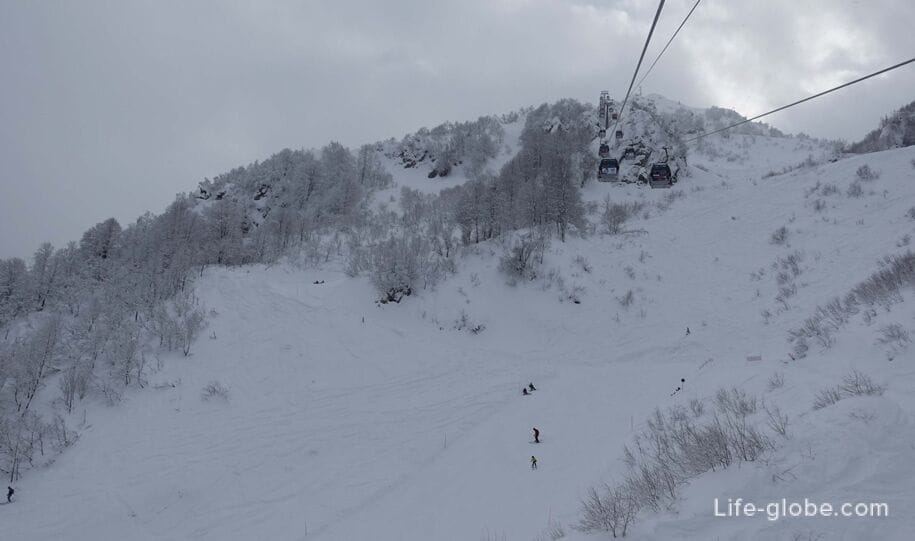 While driving, the Caucasian Express cable car passes the Rosa-1600 landing station, located at an altitude of 1600 meters above sea level.

Landing on the Rosa-1600 is possible only when climbing up. When descending, there is no landing-the elevator cabins go directly to the Arbor station.

You can get off at the transfer station. There are: observation points, places for walking and recreation, ski slopes and lifts, an instructor service, a first aid station, a restaurant and toilets.

In summer, hiking trails along the ridge run from the podsadki station. Learn more about the Rosa-1600 station… 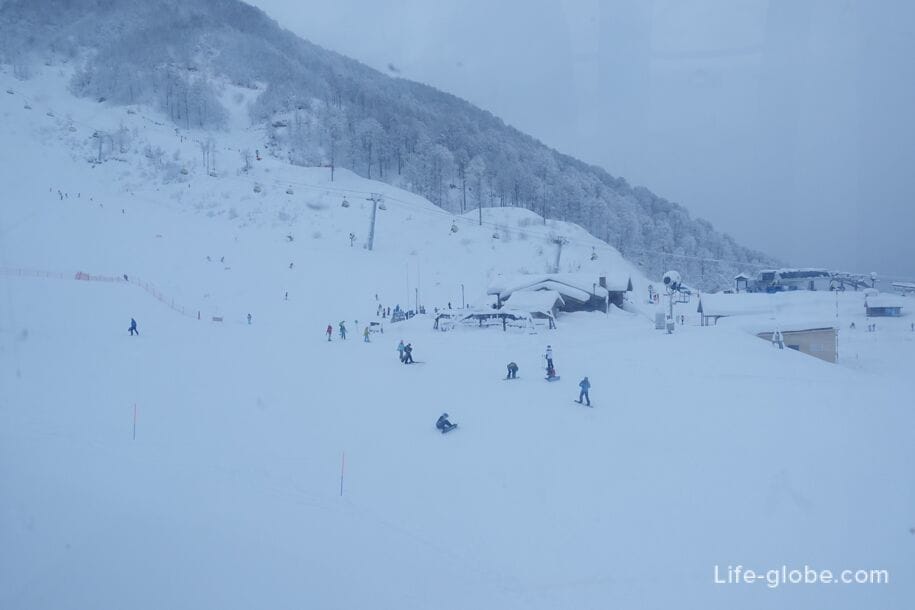 Rose Peak-the end of the road or not…

So the guests of the Rosa Khutor mountain resort got to the most popular point - Rosa Peak.

At the Rose Peak mark there are: an observation deck and observation points, a high-altitude restaurant, ski slopes and lifts, toilets, a first aid station, as well as some entertainment - swings above the clouds and a suspension bridge, paragliding flights and hiking summer routes are possible. Learn more about Rose Peak and all the possible entertainment and routes on the top… 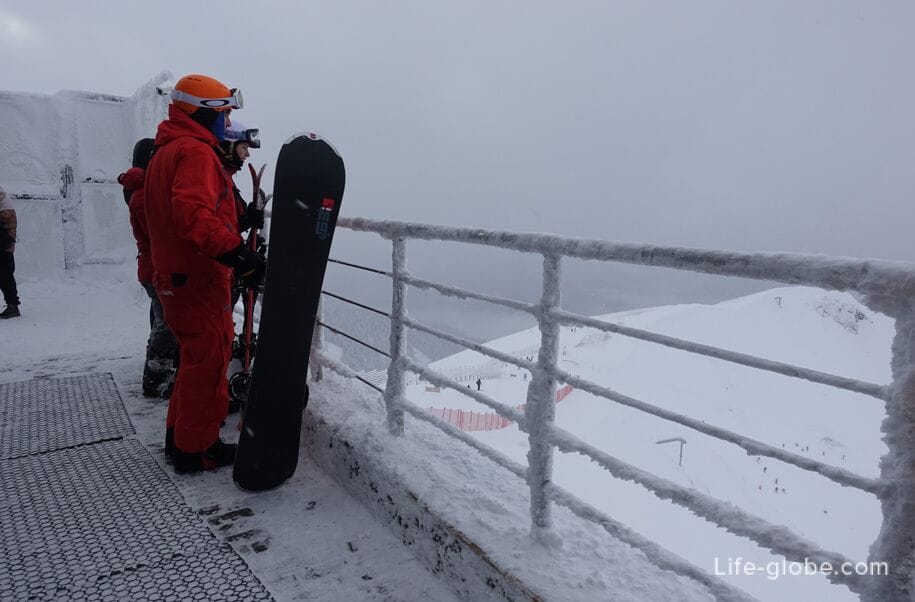 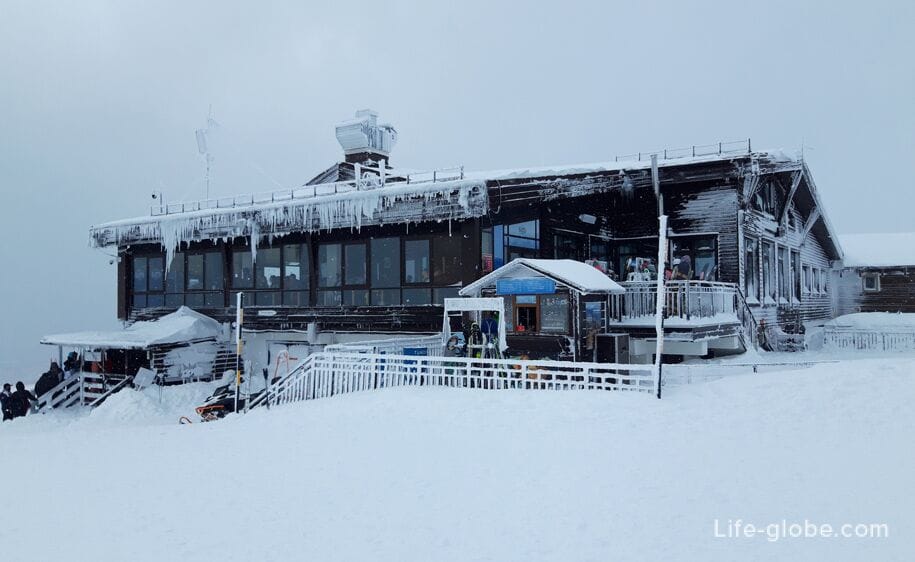 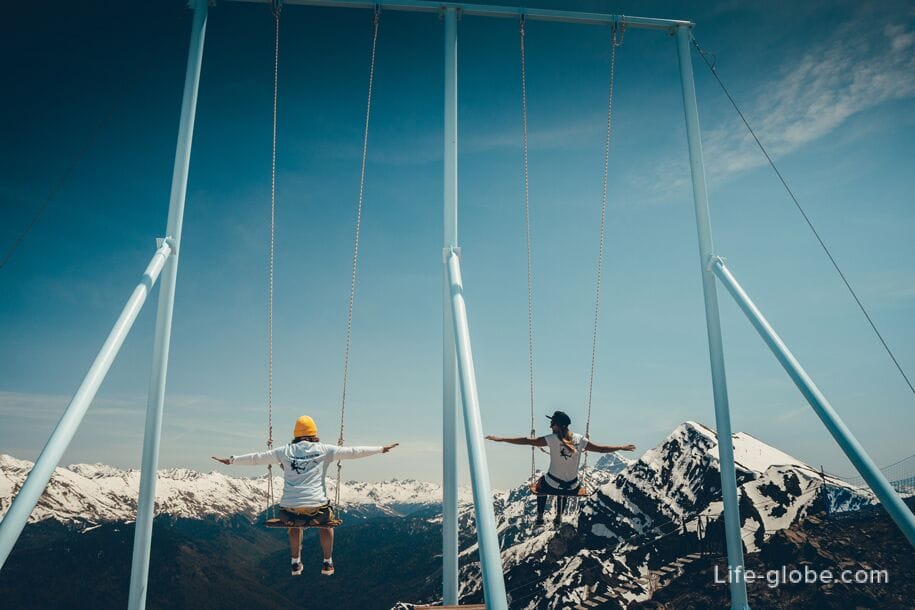 Although Rosa Peak is the most popular and the final point of walking tickets, it is not the highest point of the Aibga ridge. The highest is the "Stone Pillar", which has a height of 2509 meters above sea level.

Therefore, in the summer period Rose Peak is not only a popular height, but also acts as a connecting link. The following walks can be taken from Rosa Peak:

- to the observation deck on the mountain "Stone pillar". From Rosa Peak, you can walk or first go down on foot to the Crocus chairlift, then take the lift and walk a little again; 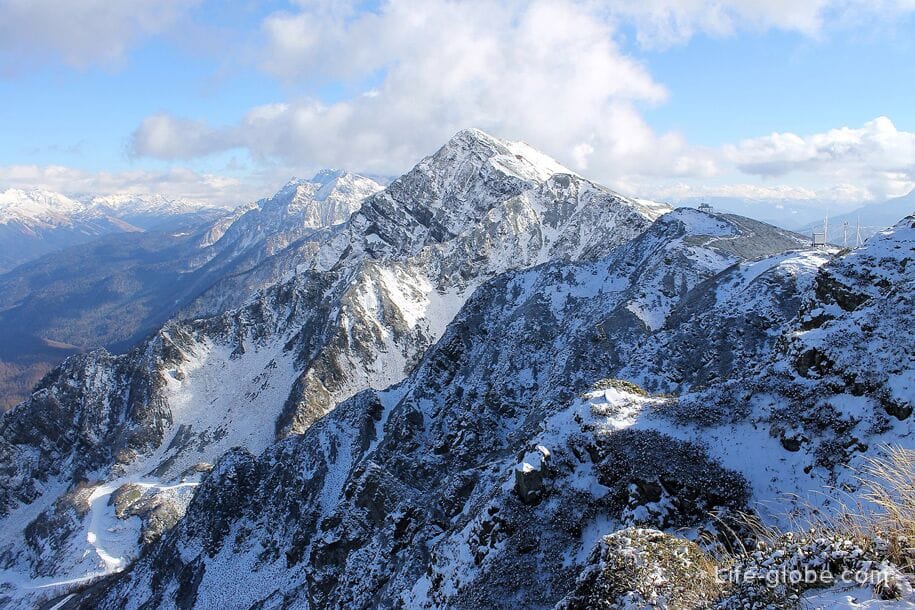 - take a walk through the park of waterfalls "Mendelikha", located on the southern slope of the Aibga ridge at an altitude of 1470 meters above sea level.

In the waterfall park: a cafe at the Edelweiss lift and 7 waterfalls-Mendel, Chervonny, Chara, Mishkin grotto, Yaya, Snow channel and Golden with a viewing platform over the abyss.

You can take a walk through the waterfall park in the summer by purchasing a walking ticket "The Way to the peaks + Mendelikha Waterfalls Park". According to the tickets, you should first climb the Rosa Peak on the cable cars, then go to the high-speed chairlift "Edelweiss" and go down on the last one. The park starts right at the bottom of the lift, there is a cafe here. The way back is the same, only in the opposite direction through Rosa Peak.

During a walk in the Mendelikha Waterfalls Park, it is recommended to have a passport with you, and birth certificates for children, since the park is located in the border zone with Abkhazia and they can check the document. 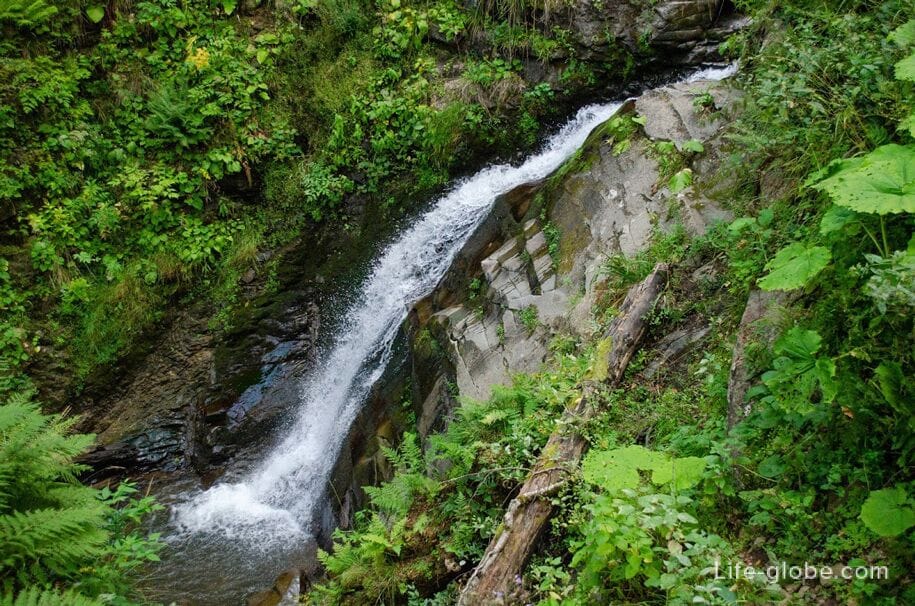 The Rosa Peak playground is available in winter by ski passes and year-round by walking tickets, besides, depending on the season and at the discretion of the Rosa Khutor resort administration, the walking ticket "Path to the Peaks" can include several combinations, for example:

- ascent from Rosa Dolina to the Olympic Mountain Village and to the Rosa Peak observation deck: 1 ascent and 1 descent in one day on the Olympia cable cars, the Reserved Forest and the Caucasian Express;

- various combinations can also be added to the above ticket:

All ticket combinations change both from season to season and during the seasons at the discretion of the Rosa Khutor Resort Administration. Also, as a rule, access to all objects included in a particular tariff is possible for only 1 day.

During the summer season, some chair lifts (open) may also be available with walking tickets. More often than the above, it is also the Wolf Rock cable car, which connects the Rosa Stadium, located at an altitude of 960 meters above sea level and where the Husky Farm, Deer Farm and Shishin Dvor theme parks are located, with the Arbor station (the upper station of the Reserved Forest cable car).

There are other ways to get to Rosa Peak via ski passes for guests. For example:

- from the Rosa Stadium, first on the Wolf Rock lift, and then on the Caucasian Express;

- from the lower station of the Rosa Khutor cable cars in the Rosa Valley, first by the gondola cable car "Strela" to the podsadka station "Rosa-1600" , and then by the Caucasian Express to Rosa Peak.

In the winter season, the Strela lift is only available for guests on ski passes, so the queue for this cable car is usually less from the height of the season, and by using this cable car, skiers and snowboarders can save time than when climbing on the Olympia and Reserved Forest cable cars;

- from the Roza Stadium, climb the Dryada and Tundra lifts, then go down the slopes of the southern slope of the Aibga Ridge, and climb the Edelweiss lift.

The cable cars "Olympia", "Reserved Forest" and "Caucasian Express" operate all year round.

Attention! Lifts and trails (one or the other, or all) may be closed due to weather conditions. We recommend that you check the information before visiting the official website in real time (you can download the mobile application).

During the summer and autumn periods, you can climb to various heights of the Rosa Khutor resort on foot or by bike along mountain trails (free of charge). More information about hiking and cycling routes to Rosa Khutor can be found here →

In winter, there is a large outdoor parking at the Rosa Stadion mark of 940 meters, from where you can also start climbing the mountains on the lifts. Parking on it is free. 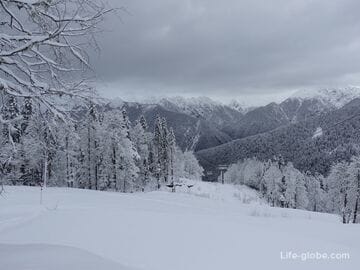 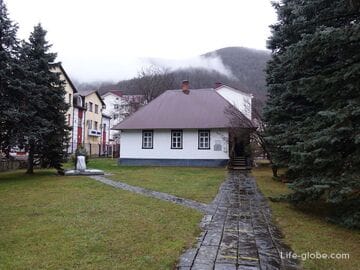 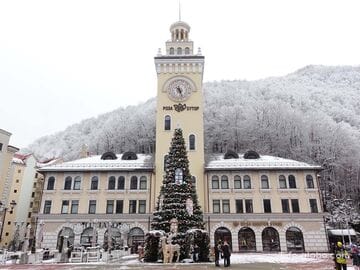