Matthias Church or Church of St. Matthias, also known as the Church of the mother of God, at least - the Buda Church (Mátyás Templom) is a Roman - Catholic Church with a rich historical past and is one of the most important churches in Budapest, the second - St. Stephen's Basilica in the historic district of pest.

The Church is named in honour of king Matthias, in which the medieval Hungarian Kingdom reached the peak of its power.

According to the tradition of the Church, the Matthias Church was founded by the Holy king Stephen (istván), built in 1015 in Romanesque style and consecrated in honor of the virgin Mary. This Church was destroyed during the Mongol invasion of 1241-1242 years. In the second half of the 13th century king of Hungary Bela IV ordered the restoration of the Church, but of larger size.

During history the Church has served as a venue of national importance. Also within its walls the coronation was performed, including Franz Josef I of Hungary and his wife Elizabeth, and Charles I of Hungary and City of Bourbon-Parma.

Matthias Church is part of the complex of the Buda castle, located on a hill (the West Bank of the Danube river), on the Holy Trinity square (Szentharomsag ter), in front of Fisherman's Bastion (Halaszbastya), complementing the architectural background the Matthias Church.

The main facade of the Church overlooks the square of the Holy Trinity and turned to the West. In the Central part of the façade is the portal, over which there is a Gothic rose-window. And in front of the main entrance to the Shrine, on the square, located the Holy Trinity Column (Szentharomsag-decent example). 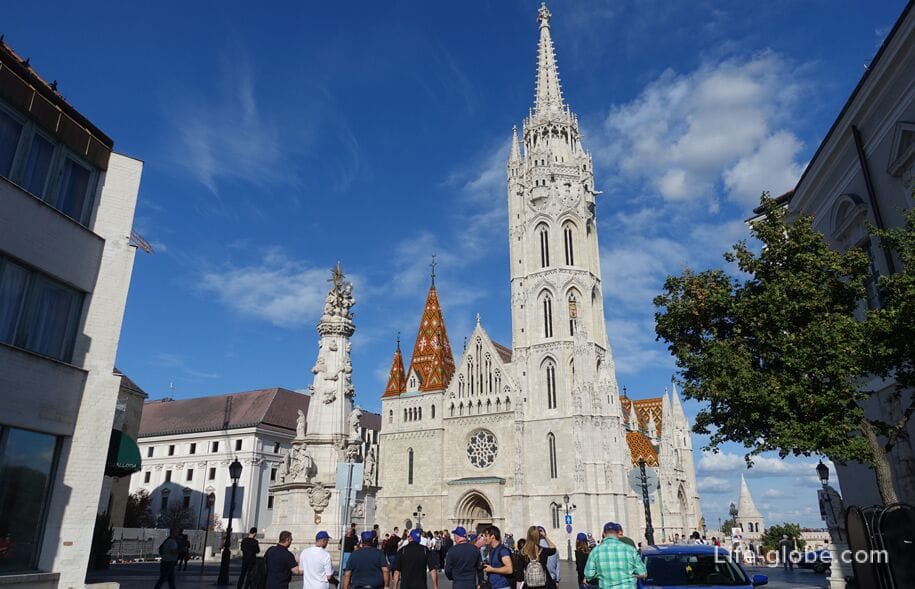 In the South-Western corner of the temple stands a Grand bell tower, the total height from the floor of the Church is 78,16 meters and 76,57 meters from the sidewalk. The bell tower of the Matthias Church is the highest building of the Buda castle.

On the Northern side of the main facade is decorated with a low tower of king Bela. 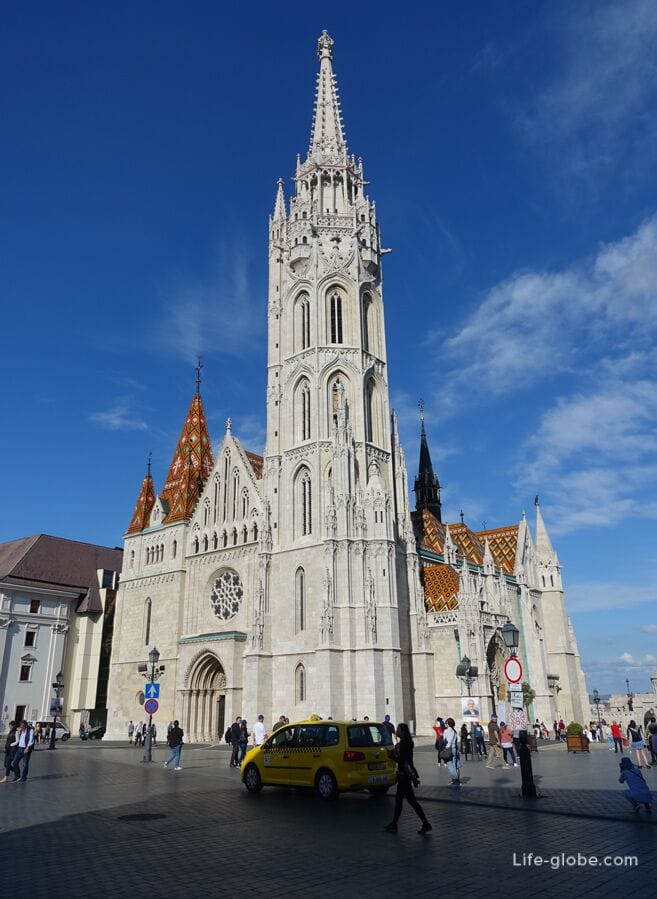 Another entrance to the Church located on the South side of the temple. From this perspective, especially beautifully it looks, the roof covered with tiles famous PECs factory "Zsolnay", in the sun, playing with bright colors and creating the effect of fragile mosaic. 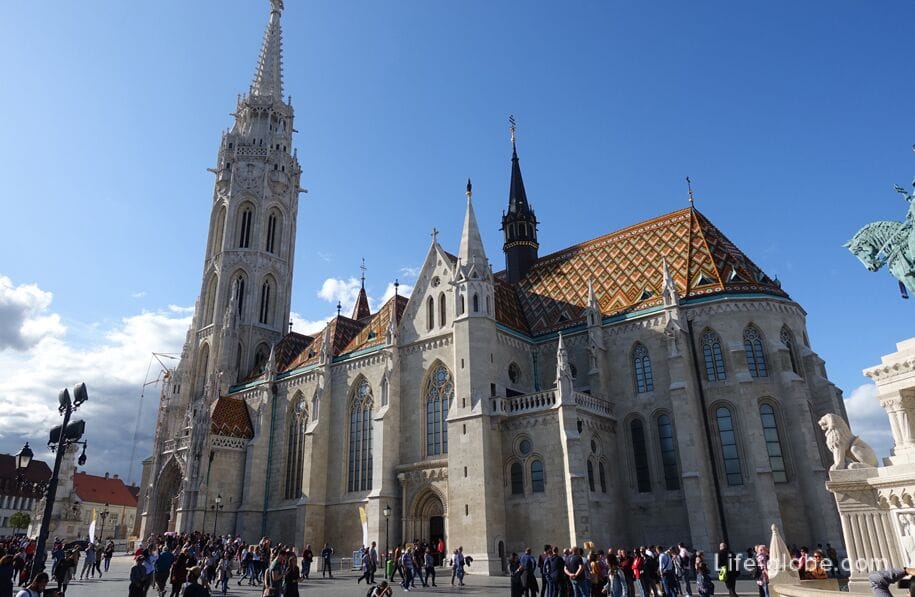 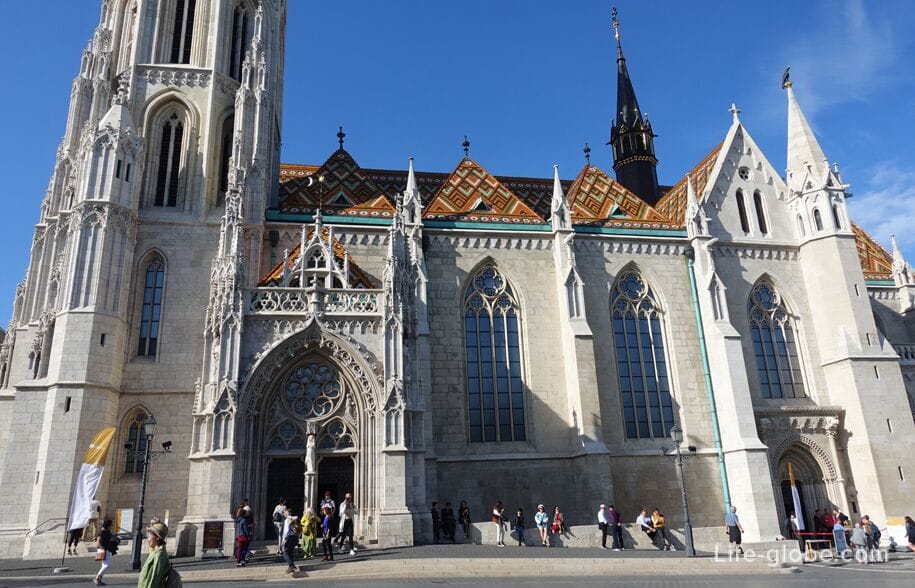 Near the South-Eastern corner of the Church, in front of the fishermen's Bastion is a monument - a bronze equestrian statue, dedicated to Saint Stephen I (Szent Istvan szobra), established in 1906. Read more about Fisherman's Bastion... 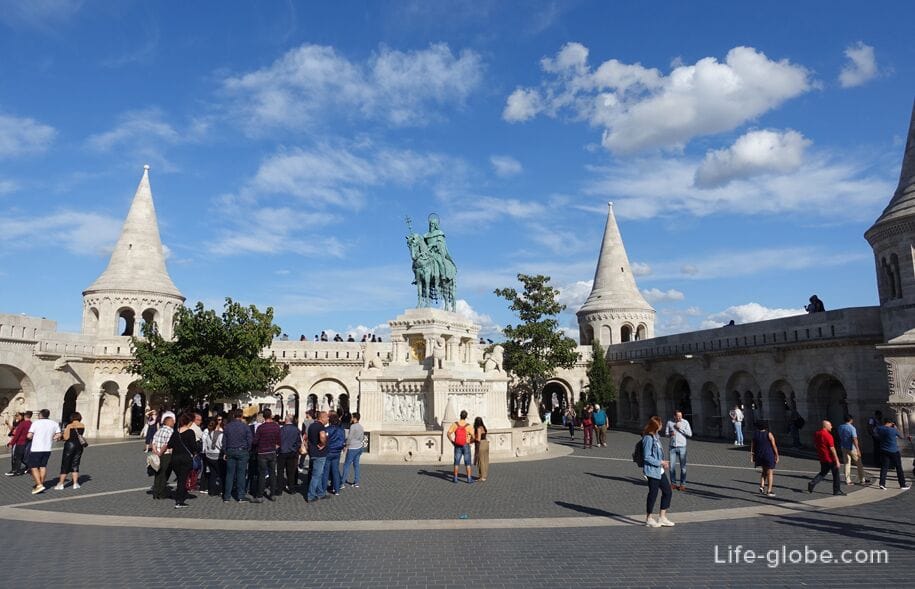 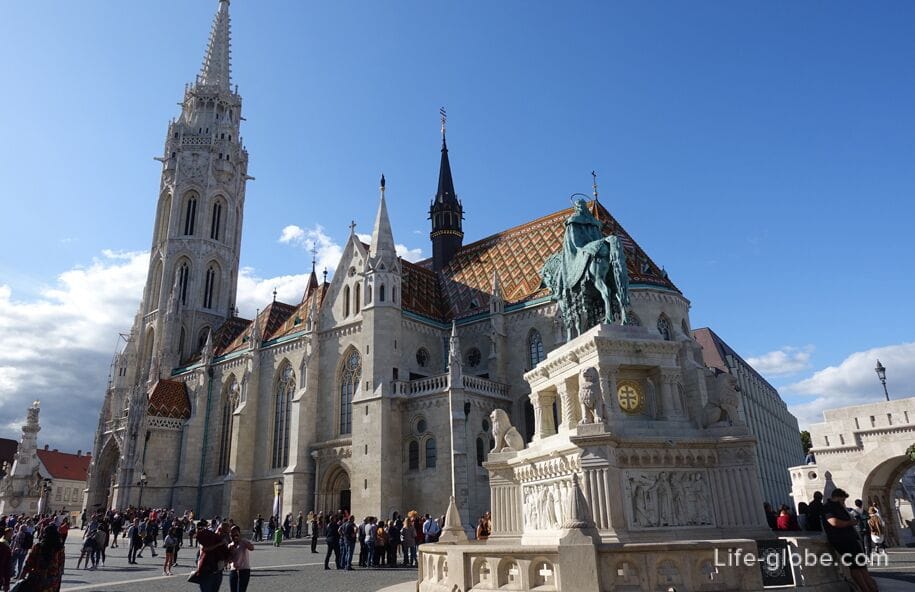 Viz Stephen's Church on the North side. 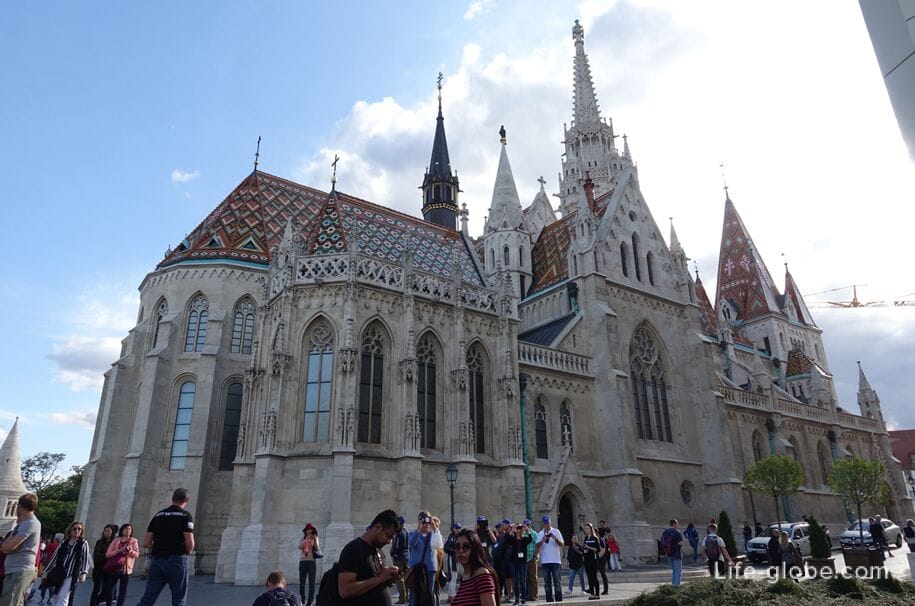 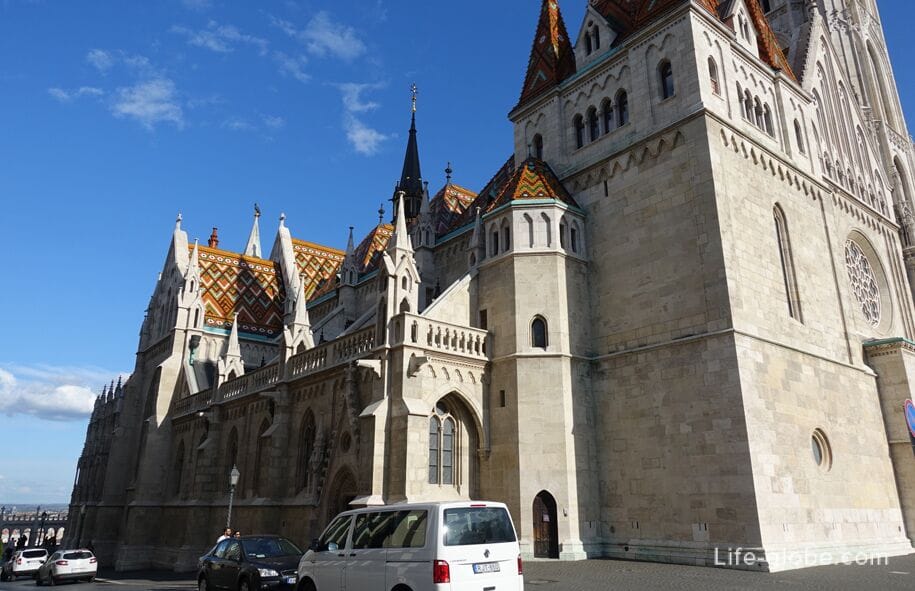 In terms of the Church has an irregular rectangular shape with a projecting apse. The Church has three naves, where the Central nave is separated from the side rows of massive columns. The lateral naves have several small chapels, among which are especially notable for the richly decorated chapel of St. Stephen.

Almost the entire interior of the Church was established in the late 19th century, during the large-scale reconstruction and recovery. The Prime jewels of the interior of the Church are: the pulpit of Sandstone whose surface is completely covered with Romanesque ornamental paintings, including statues of the main altar; stained glass Windows and wall paintings made by Hungarian artists LatAm K. and B. C. K. 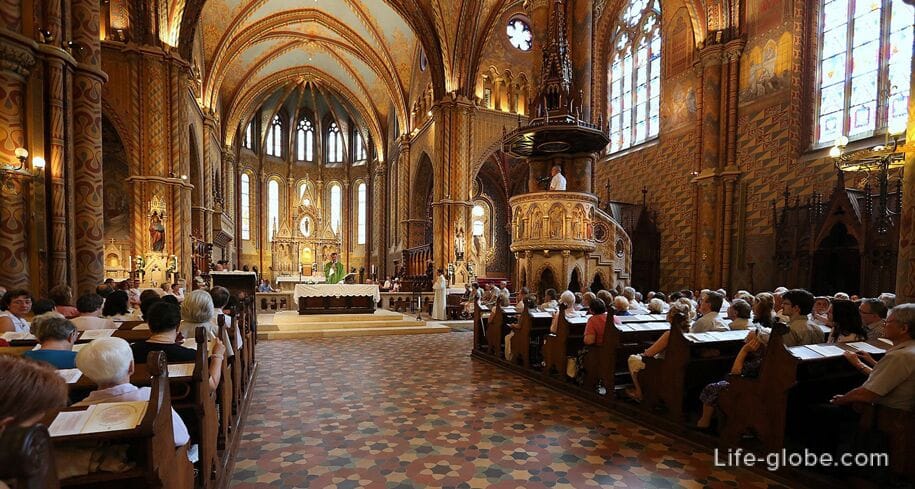 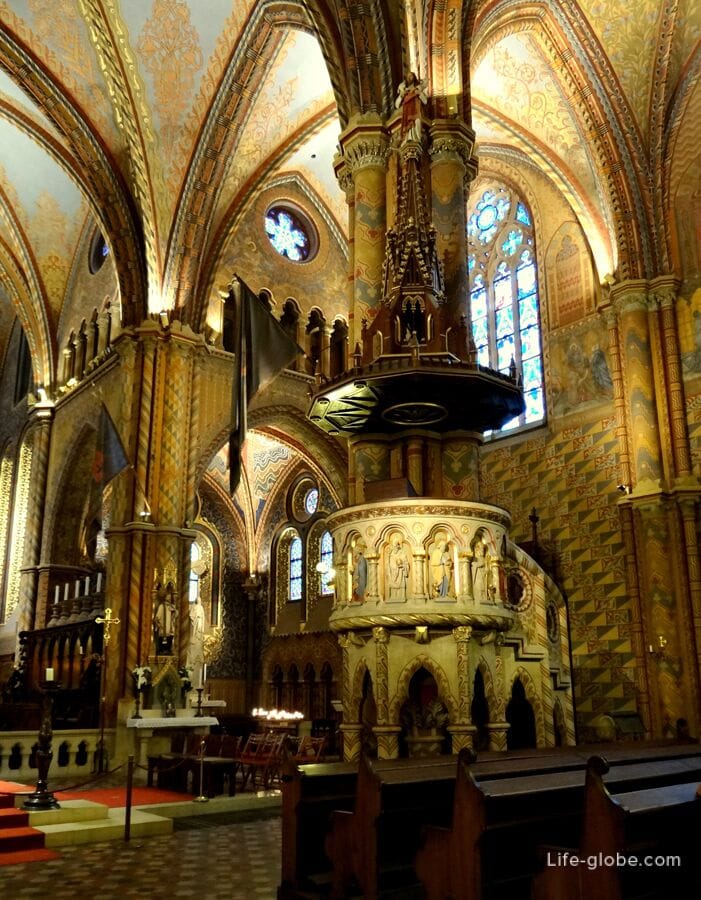 In the walls of the Church a Museum of religious art, which leads to the medieval crypt. The gallery contains a number of sacred relics and medieval stone inscriptions as well as copies of the Hungarian Royal crown and coronation jewels.

The entrance to the Church Stephen's fee, the cost of a full adult ticket costs 1,800 HUF.

In the lower canopy of the bell tower, with a height of 46.73 meters and has access from the 197 steps you can climb. The full-price entrance ticket is 1 800 HUF.

Also there is a reduced, family and group tickets. 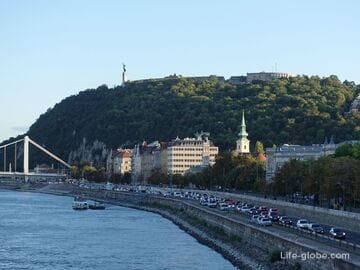 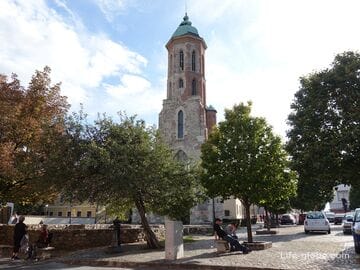 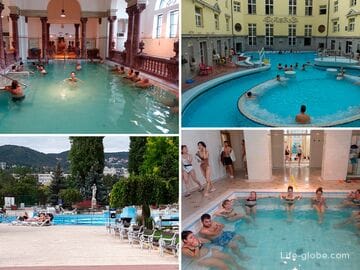