Aurora is a Diana class I cruiser, a warship of the early twentieth century, which is a symbol of the October Revolution of 1917 and a unique monument to the history of Russia.

The cruiser took part in three wars, in the February and October Revolutions of 1917 and was a forge for the training of several generations of naval officers.

Today it is a museum ship with an exposition in several halls, located in the center of St. Petersburg. 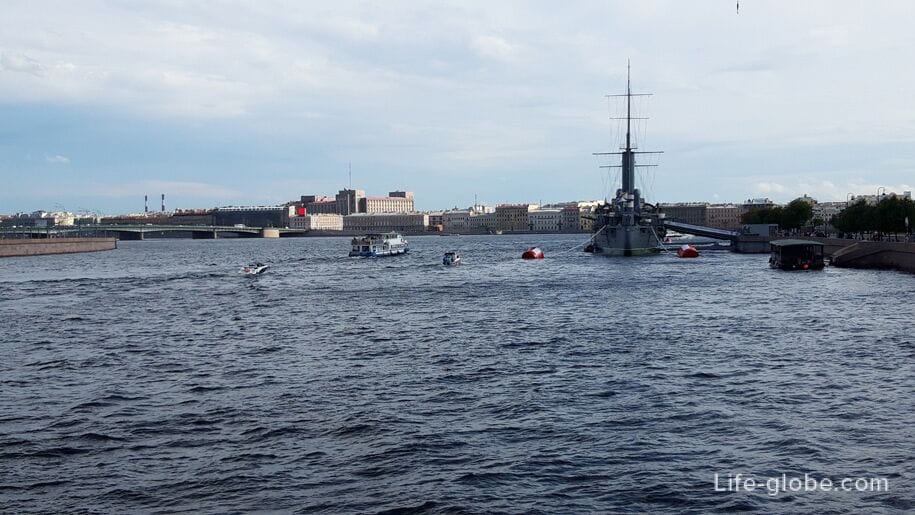 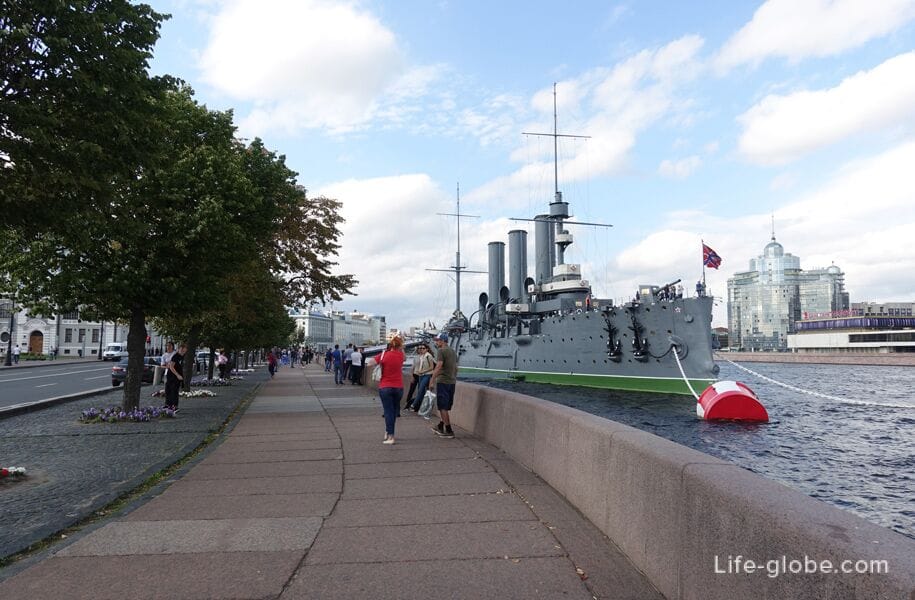 The first-rank cruiser Aurora was laid down at the New Admiralty shipyard in St. Petersburg on May 23, 1897. On May 11, 1900, the cruiser was launched, and on July 16, 1903, combat ships of the Russian Imperial Navy were commissioned as part of the Baltic Fleet.

It was the last ship in the series of Diana-class I cruisers (Pallada, Diana and Aurora).

The cruiser was named after the sailing frigate Aurora, which became famous during the defense of Petropavlovsk-Kamchatsky during the Crimean War.

During the Russian-Japanese War, the cruiser Aurora participated in the campaign of the Second Pacific Squadron, which ended with the Battle of Tsushima. In 1906-1914, the cruiser served as a training ship, making long-distance trips abroad. Aurora also participated in combat operations on the Baltic Sea during the First World War.

A blank shot from the Aurora on October 25, 1917 was the signal for the beginning of the storming of the Winter Palace (the sailors of the cruiser participated in the October armed uprising). Today, near this place on the English Embankment of St. Petersburg, there is a stele with an inscription about the event (located opposite the Rumyantsev mansion). So the cruiser became one of the main symbols of the October Revolution.

In 1941-1944, the cruiser participated in the Great Patriotic War and the heroic defense of Leningrad.

Since November 17, 1948, after repairs, the cruiser Aurora has been permanently parked at the Petrogradskaya Embankment at the source of the Bolshaya Nevka in the center of St. Petersburg. 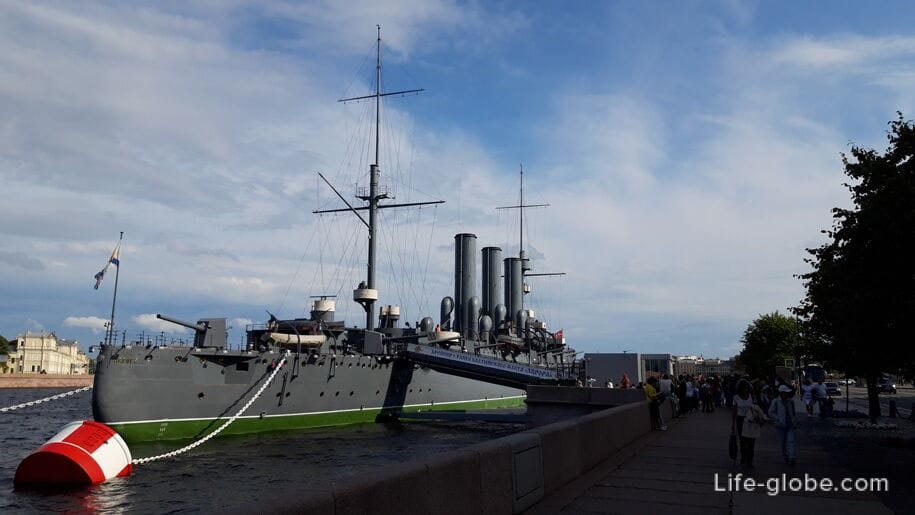 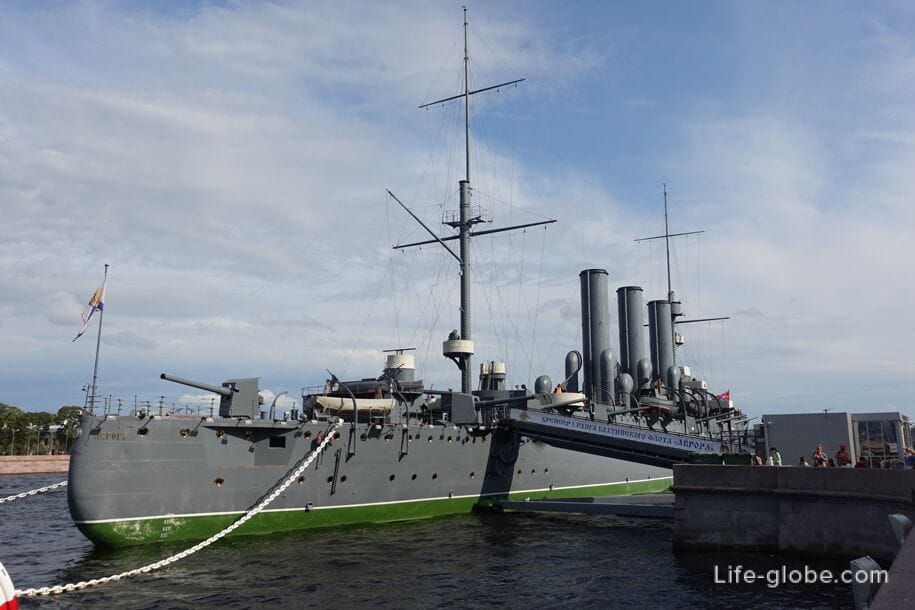 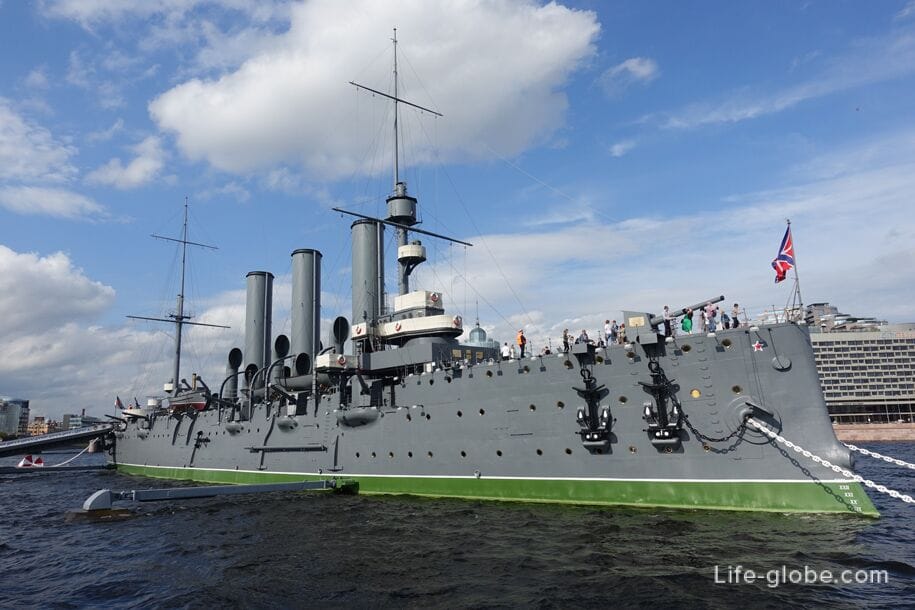 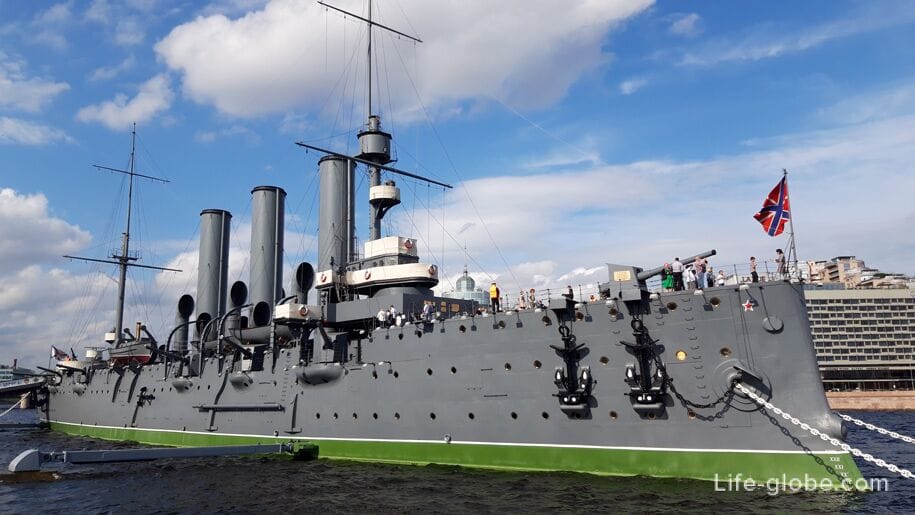 Stella near the cruiser Aurora on the Petrogradskaya embankment 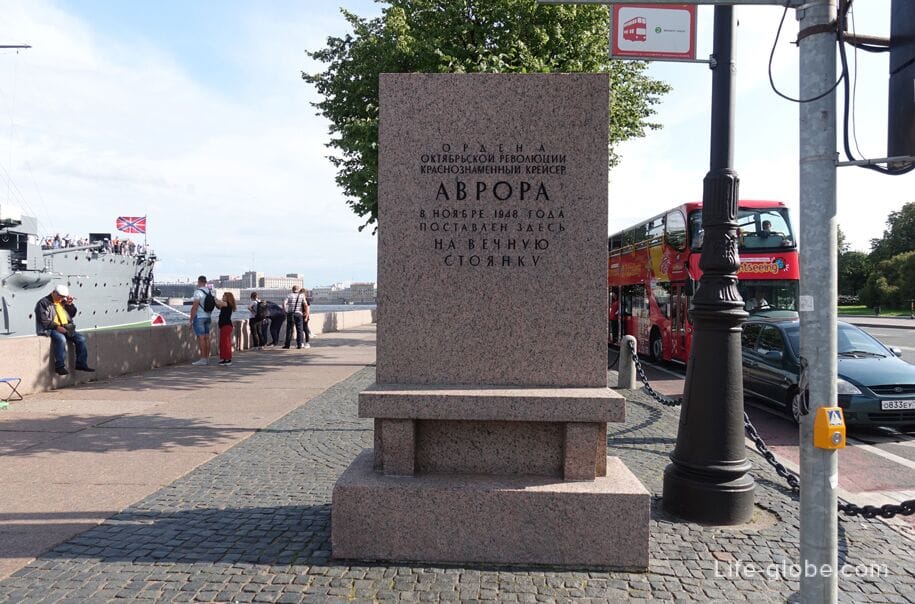 On board the Aurora, a museum exposition dedicated to the cruiser and its history is located in several halls, including as a participant in three wars: the Russian-Japanese, the First World War and the Great Patriotic War.

Hall No. 1 is the history of the cruiser Aurora, located in the place where the punishment cell, boatswain's crew services and other utility rooms used to be.

Here are paintings painted by marine artists of the Central Naval Museum and depicting the most important stages of the ship's combat path. At the bow bulkhead there is a diorama showing the ships of the revolutionary squadron, which was led by the cruiser Aurora on the Neva River on the evening of October 25, 1917.

The hall presents the naval flags of the pre-revolutionary and Soviet periods, under which the Aurora sailed the seas and oceans since 1903, including the twice-decorated Naval flag and the chef's banner, which the ship was awarded in 1924. 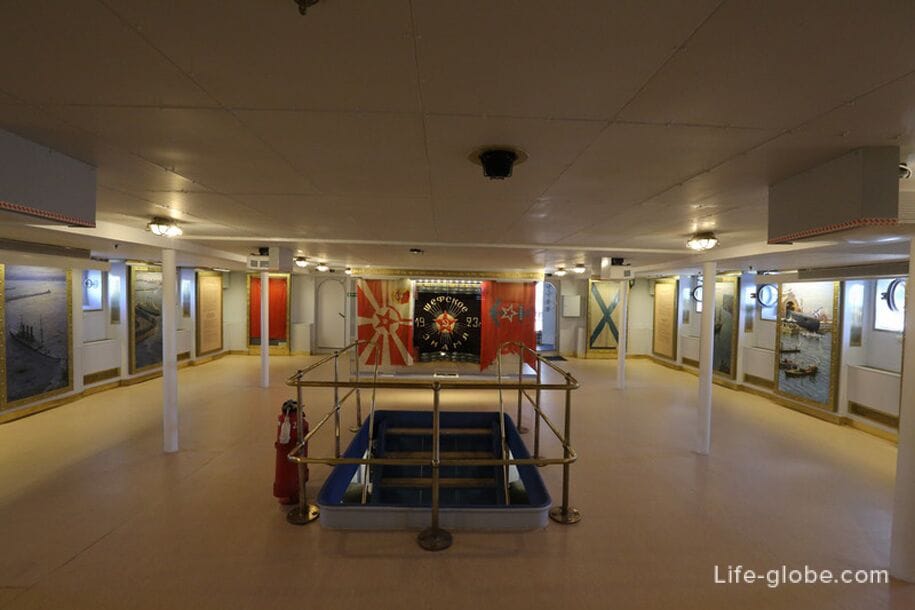 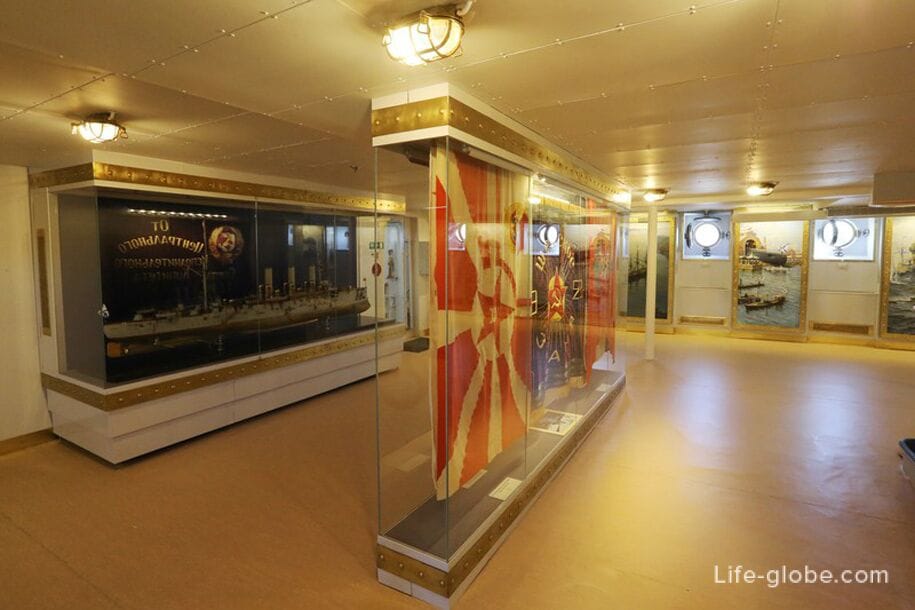 Hall No. 2 - Service and life of the personnel of the Russian Navy at the turn of the 19th and 20th centuries (on the example of the cruiser Aurora).

The exposition is presented on the battery deck of the ship, where the sailors' quarters were once located.

The crew of the Aurora consisted of 570 people: 20 officers and 550 lower ranks. The officers were housed in the cabins of the aft part of the ship, and the sailors lived in the forecastle and slept on suspended bunks, which can be seen in the exhibition. Here the sailors also ate, sitting at suspended tables.

In the showcases of the hall there are personal belongings of the ship's crew, and special attention is drawn to the spires for sampling the anchor chain, which were operated manually or using electricity. 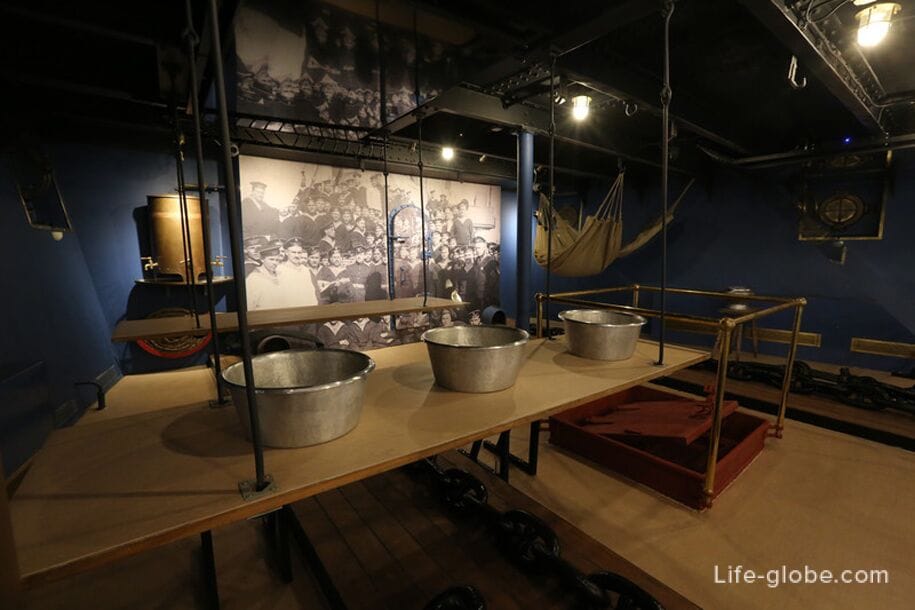 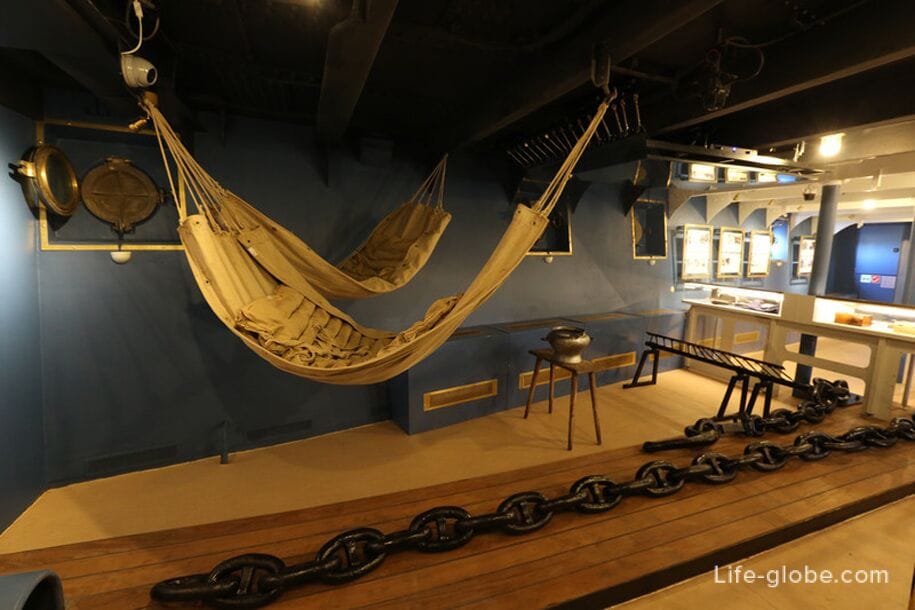 - The history of the Aurora of the late 19th - early 20th centuries, which presents materials telling about the organization of the maritime department in Russia from the second half of the 19th century to the beginning of the 20th century.

The exposition of the hall presents materials dedicated to the transition of the 2nd Pacific Squadron to the Far East and the Battle of Tsushima on May 14-15, 1905, in which Aurora participated as part of the second cruiser squadron. During the battle, the commander of the Aurora, Captain of the 1st rank E.R. Yegoryev, died a heroic death. His unique photo portrait in a frame made of burnt deck boards and twisted metal is on display in the hall.

Also in the hall there are materials about the return of the Aurora to Russia, the modernization of the cruiser based on the experience of the Russian-Japanese War, the conversion into a training ship, about her training and long voyages.

Information about the organization of church services on ships of the Russian Imperial Navy and about ship priests, in particular, on the example of the cruiser Aurora, is also of interest. 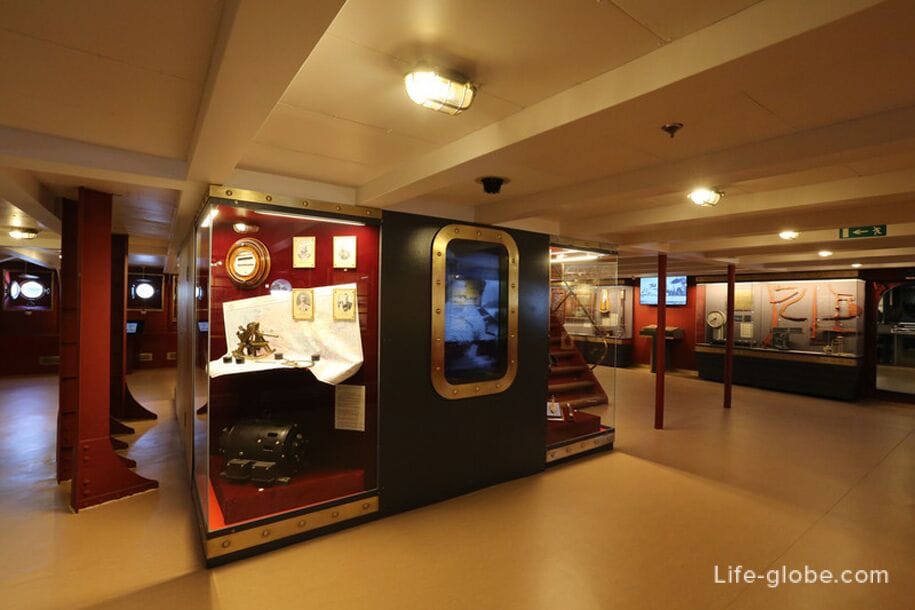 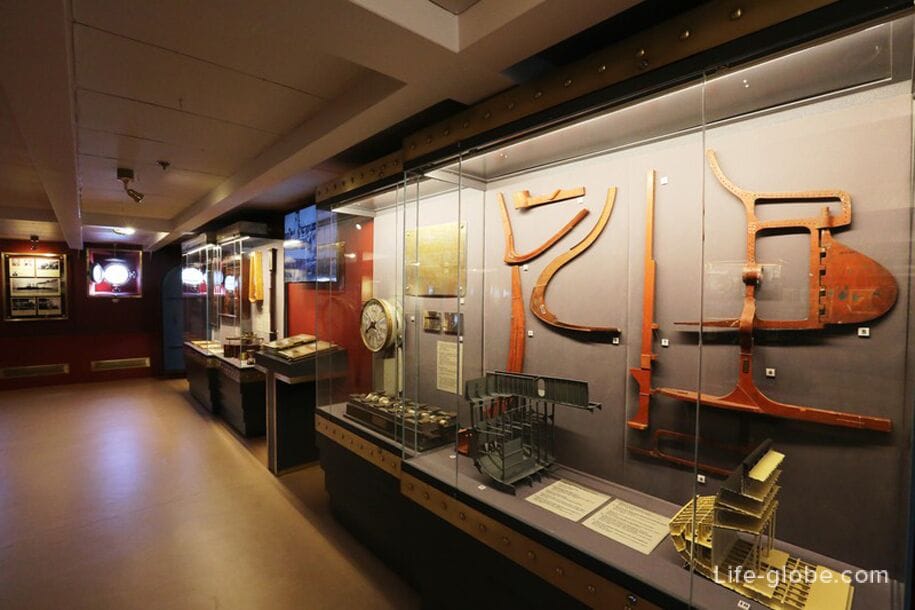 Hall No. 4 - The First World War, the October Revolution, the Civil War, the service of the cruiser Aurora in the interwar period.

The exposition of the hall presents materials about Russian shipbuilding, marine science on the eve of the First World War, the participation of the cruiser Aurora in the events of this war, in the February and October revolutions of 1917 and the service of the ship in Soviet times before the outbreak of the Great Patriotic War. 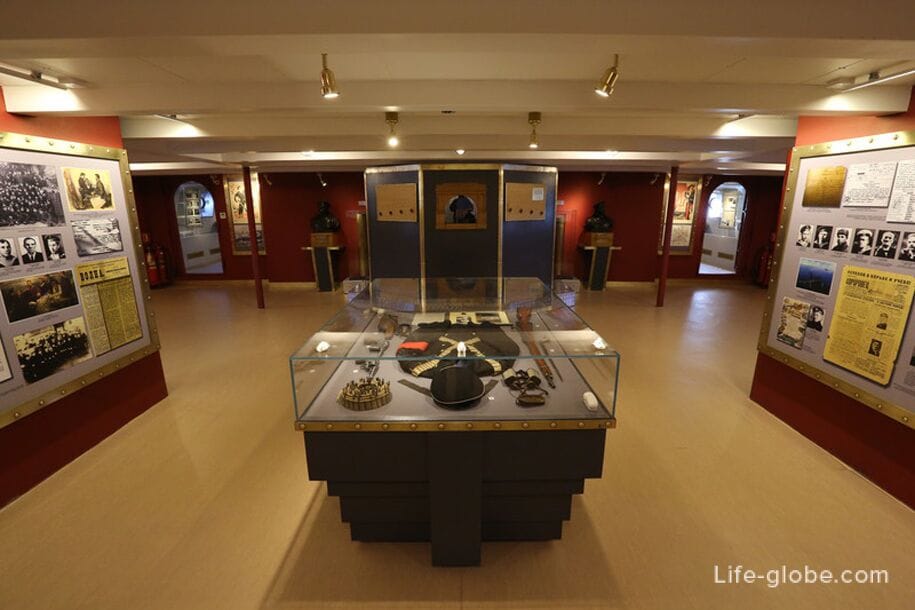 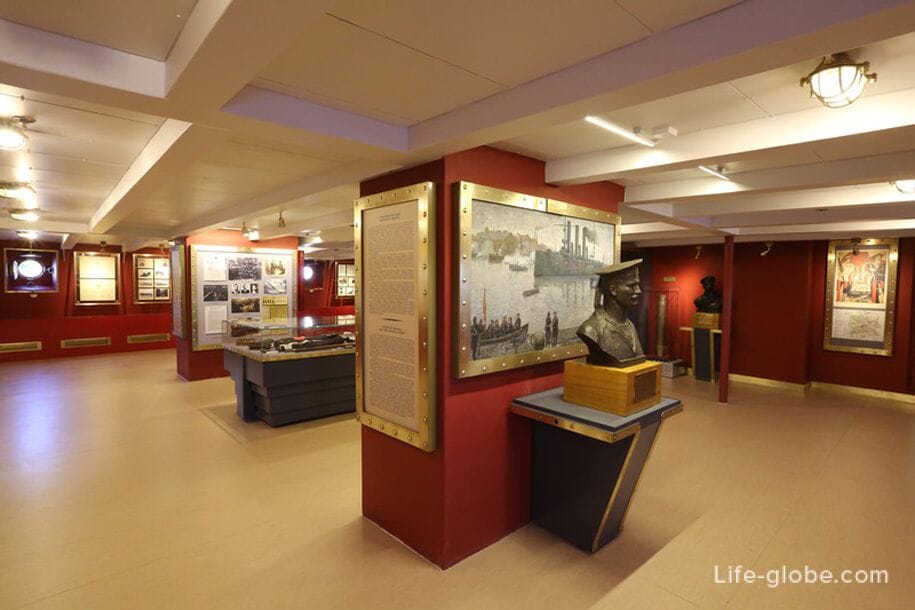 Hall No. 5 - The Great Patriotic War. The cruiser Aurora in the post-war period. The training base of the Leningrad Nakhimov Naval School. Repair and restoration work on the cruiser "Aurora".

The exposition of the hall is dedicated to the participation of the Aurora in the Great Patriotic War and the defense of Leningrad, as well as the post-war restoration of the cruiser and its service in the Navy up to the present.

The hall presents materials dedicated to the Aurora heroes of the war, the Nakhimov crew on the Aurora, as well as numerous repairs and upgrades of the ship. The stands show a photo collage on the theme of the service of the cruiser Aurora in different years and photos of celebrities who visited the ship. 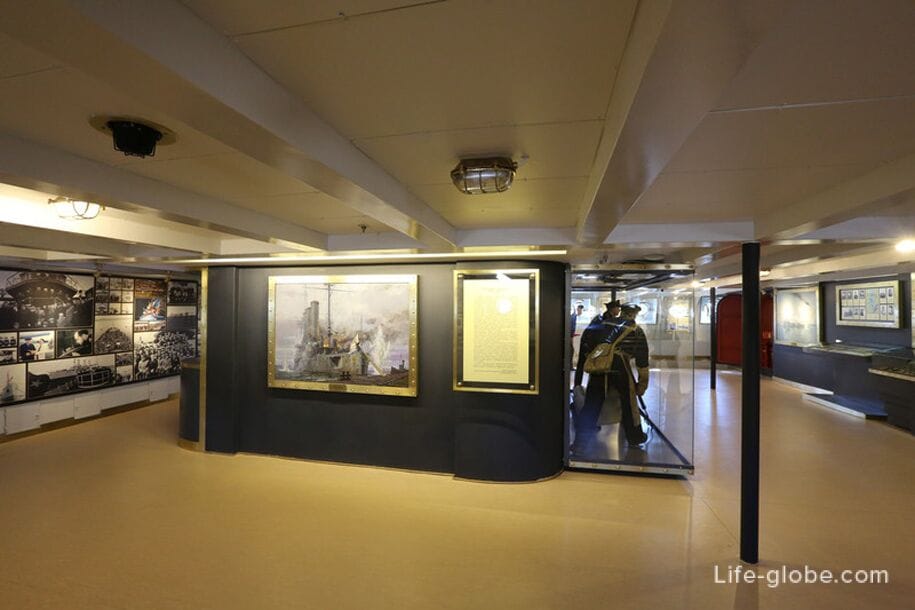 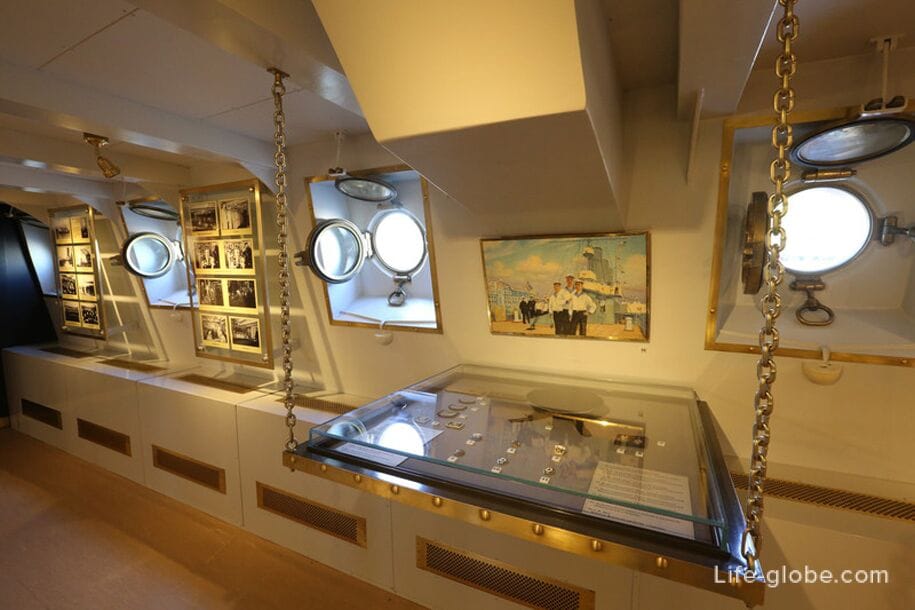 The exposition of the hall contains gifts to the cruiser Aurora and holographic copies of ship models from the CVMM collection. Temporary exhibitions are also held here. 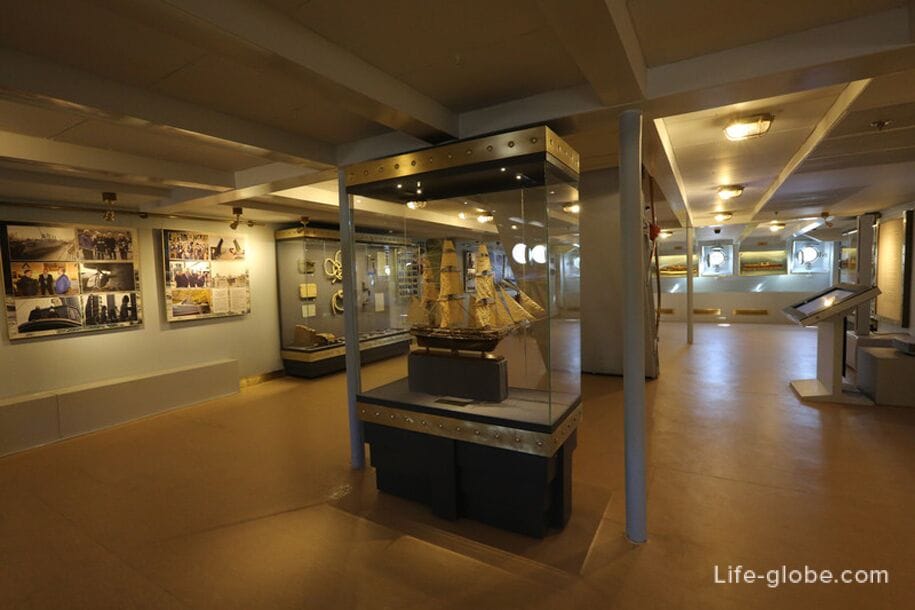 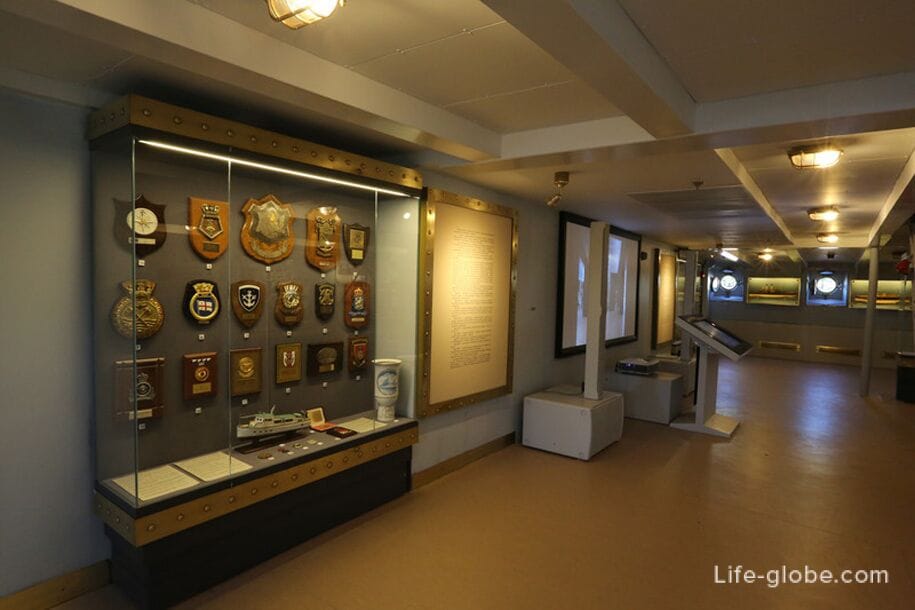 Hall No. 7 is an open storage room, where the iconostasis of the reconstructed Aurora ship church is located, as well as materials with views of the sea cathedrals of St. Petersburg. 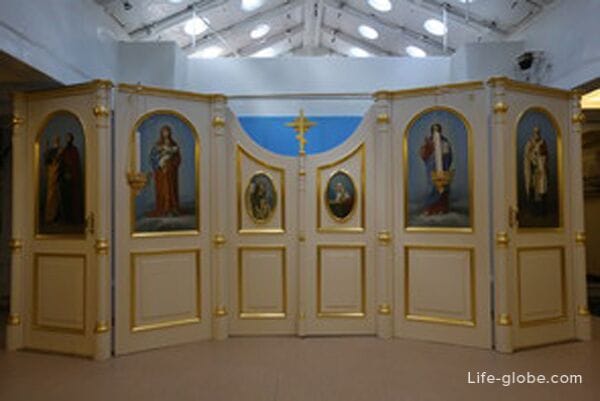 Hall No. 8 - History of Naval Medicine.

By July 2018, according to archival photographs and drawings, the Orthodox ship temple, which was abolished in 1917, was restored on the Aurora. On church holidays and weekends, divine services are held there.

In addition to the museum exposition, the cruiser Aurora hosts a series of lectures on the history of the Russian Navy.

The cruiser Aurora is a branch of the Central Naval Museum named after Emperor Peter the Great.

Entrance to the museum of the cruiser Aurora is paid. The ticket offices are located near the cruiser. Tickets can also be purchased online on the museum's website.

The cruiser Aurora can also be seen and visited with one of the excursions in St. Petersburg

The address of the cruiser Aurora: Petrogradskaya embankment, opposite house 2.

The nearest metro stations are Gorkovskaya and Lenin Square. From "Gorkovskaya" you can walk or take trams No. 6, 40; from "Lenin Square" - on foot or by tram No. 6.

From the city center, you can walk along Trinity Bridge

All accommodation facilities in St. Petersburg, including in the city center and more remotely from it, can be view and book here 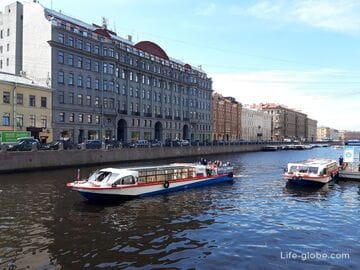 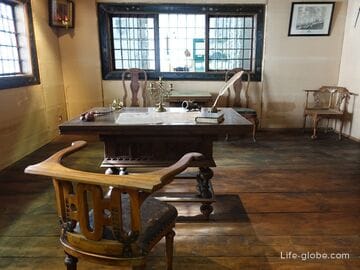