Louvre, full official name: Louvre Museum (French name: Musee du Louvre) is an art museum in Paris, which is one of the largest, most famous and visited museums in the world.

The museum is located in the center of Paris and is a vibrant historical landmark of the city, as well as one of the oldest museums with rich collections of sculptures, art objects, paintings, drawings and archaeological finds, ranging from Antiquity to the 20th century. In addition to permanent exhibitions, temporary exhibitions are held in the museum.

One of the most famous works of art exhibited in the Louvre are the painting Mona Lisa (Joconde, Gioconda) by the Italian artist Leonardo da Vinci and the ancient Greek sculpture Venus de Milo, created in the Hellenistic period, somewhere between 150 and 125 BC, and depicting the ancient Greek goddess Aphrodite (the Romans have Venus). 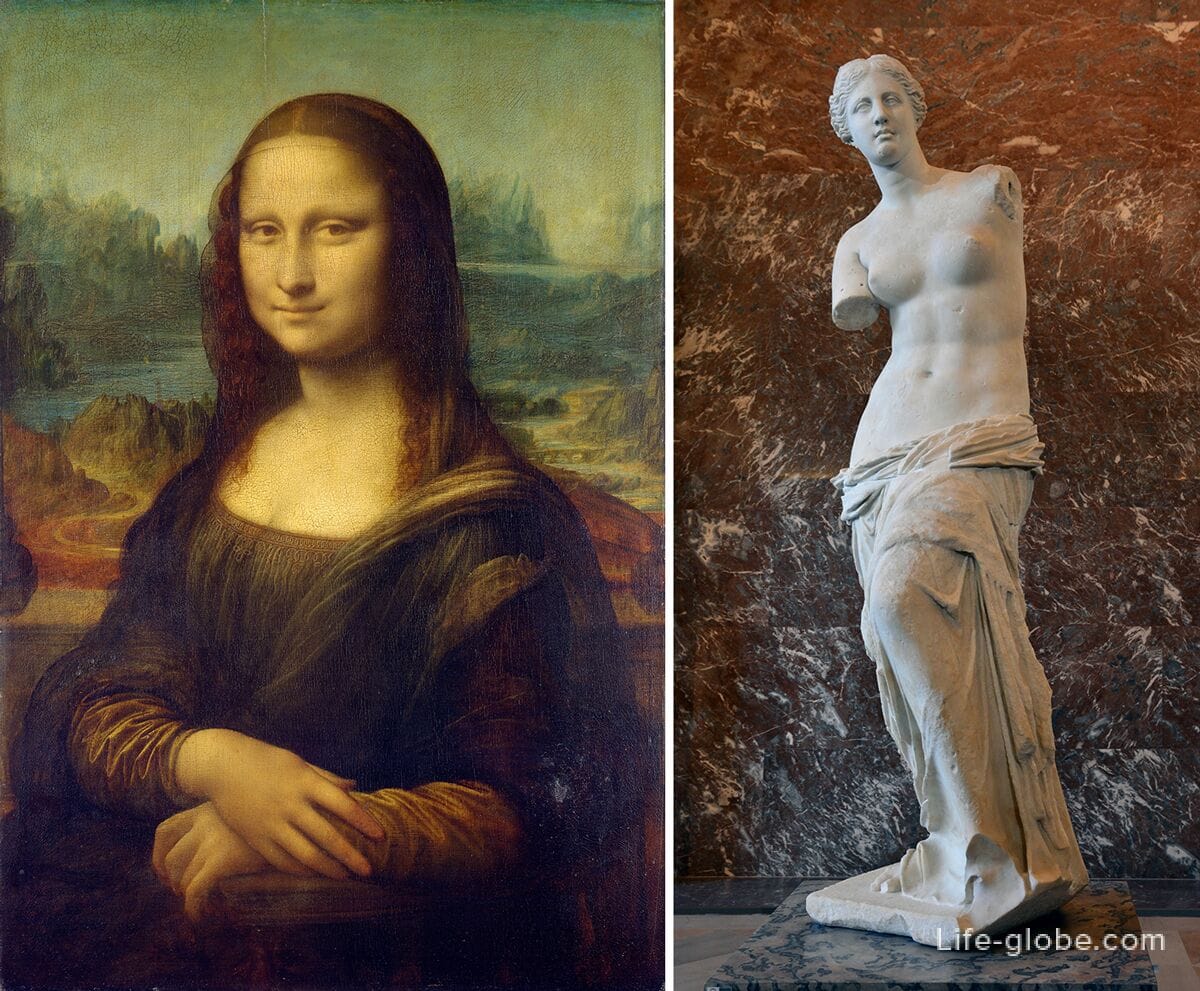 The building of the Louvre Museum itself is a masterpiece and a landmark, since it is the ancient royal palace of the Louvre (Palais du Louvre), which was originally erected as a castle by King Philip Augustus in 1190.

Later, King Charles V turned the castle into a royal residence. Since 1528, by order of Francis I, the transformation of the residence into a magnificent royal palace began, the completion of which was carried out during the reigns of Henry II, Charles IX and Henry IV, who connected the Louvre with the Tuileries Palace, after which the palace became a single complex.

Starting with Louis XVI, the palace was enlarged and became the main residence of the French monarchs. Louis XIV also chose Versailles as the new royal residence. Since the 18th century, the number of proposals to turn the Louvre building into a museum for the exhibition of masterpieces from the royal collections has been growing. The project was born in the reign of Louis XV and ends with the French Revolution. After the revolution, the work in the Louvre was continued by Napoleon I, who began the construction of the northern wing, completed in 1852 under Napoleon III. With this, the construction of the Louvre was completed. After the fire and destruction of the Tuileries Palace, which occurred during the siege of the Paris Commune in May 1871, the Louvre acquired its current size and appearance.

In 1792, it was decided to open a museum in the Louvre, which opened its doors to the public on August 10, 1793. Under the First Empire, the museum was called the Napoleon Museum.

Today, the Louvre building is an elegant historical landmark of Paris, the architectural center of which is the Clock Pavilion (Pavillon de l'Horloge), built during the reign of Louis XIII by architect Jacques Lemercier. 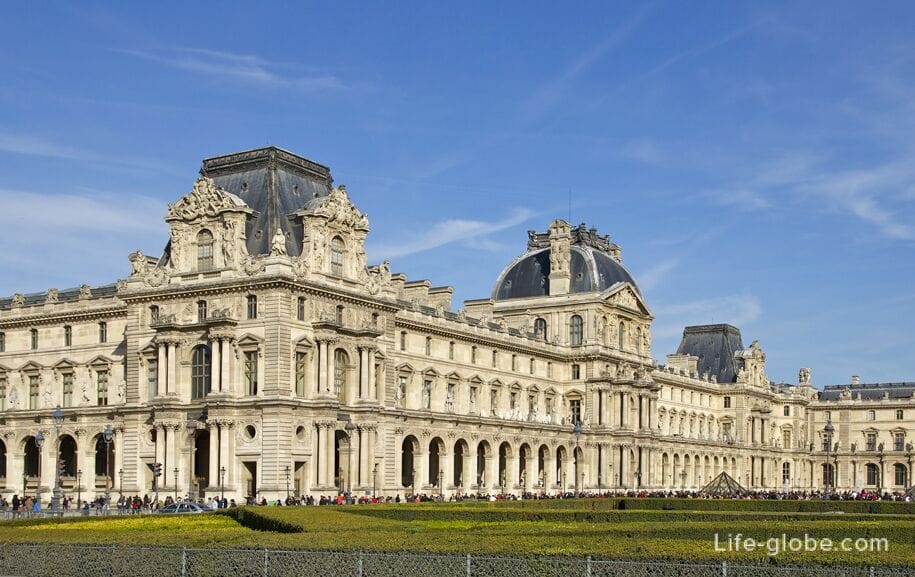 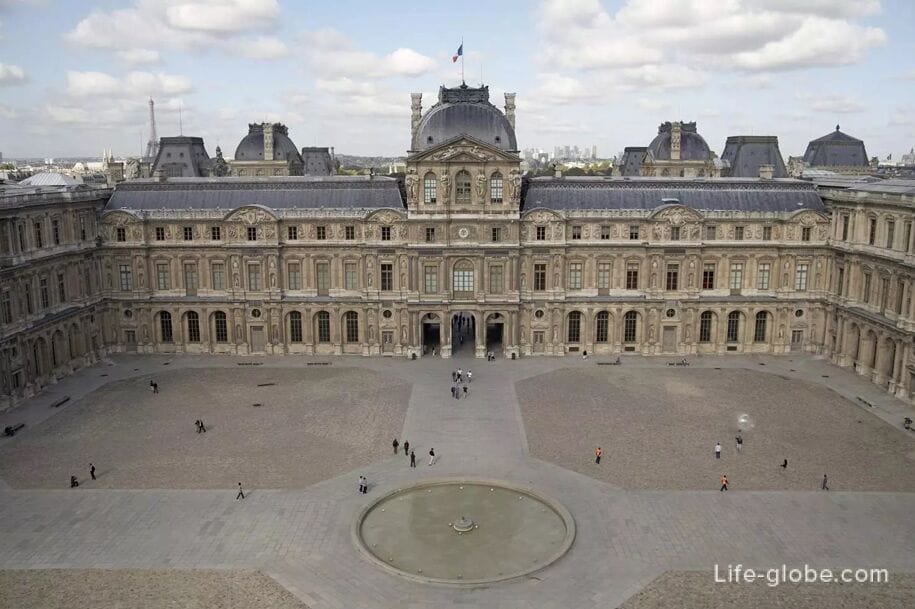 The former garden of the palace is the Tuileries Garden (Jardin des Tuileries), which are now public parks with terraces, alleys, flower beds, ponds, fountains, sculptures, museums, cafes and a playground (entrance to the park is free). 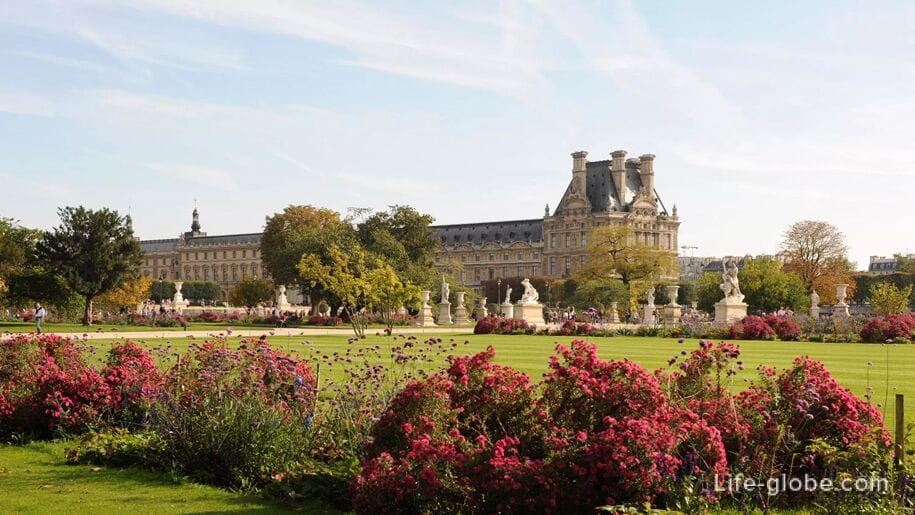 The main entrance to the Louvre Museum is located between the wings of the palace, in the center of the Napoleonic Courtyard, and is carried out through the glass Pyramid of the Louvre (Pyramid du Louvre), erected in 1989 by architect Io Min Pei. Two information points for visitors are also placed under the pyramid.

Collections of the Louvre Museum

The creation of the Louvre collections originates from the royal collections collected at one time by Francis I (Italian paintings) and Louis XIV (the largest acquisition is the paintings of banker Everard Zhabakh). 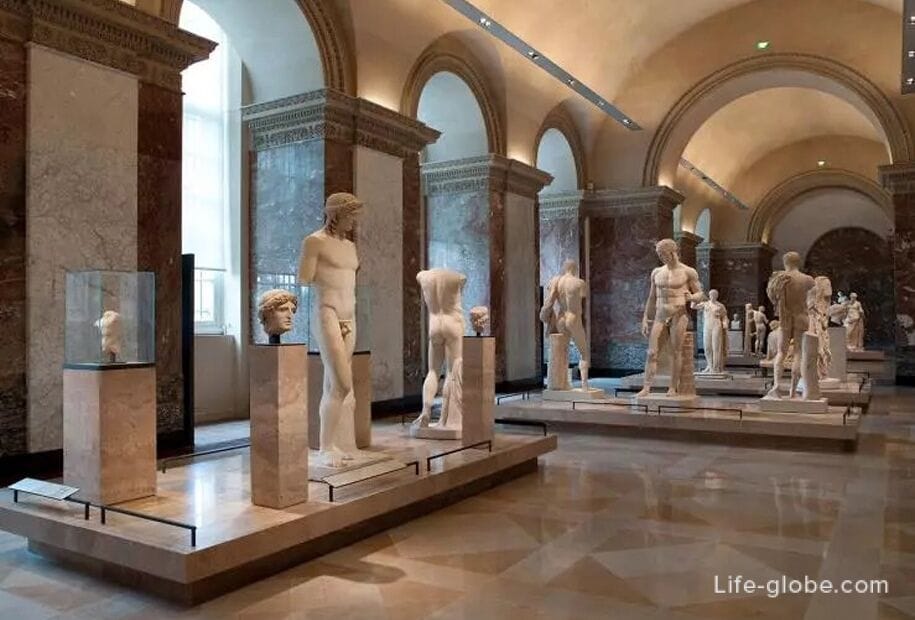 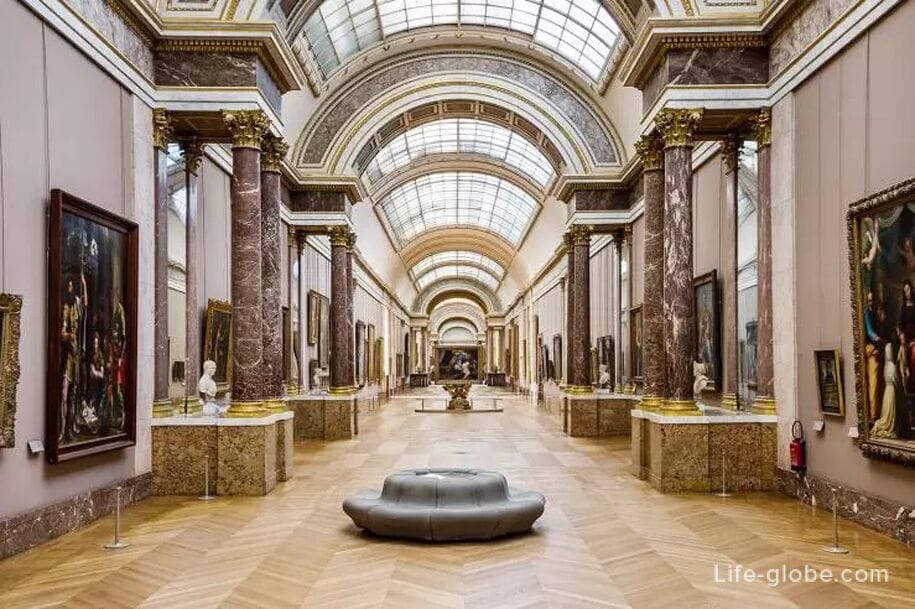 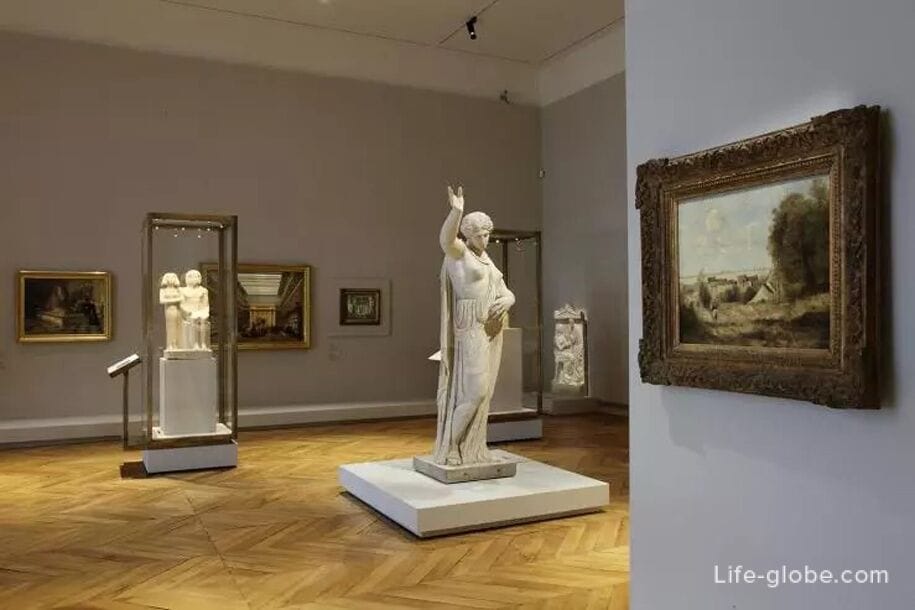 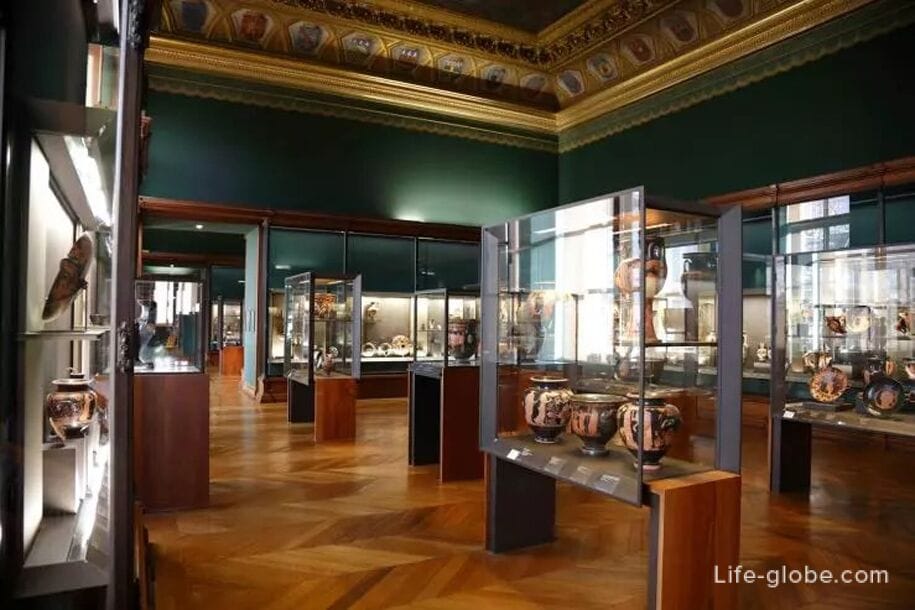 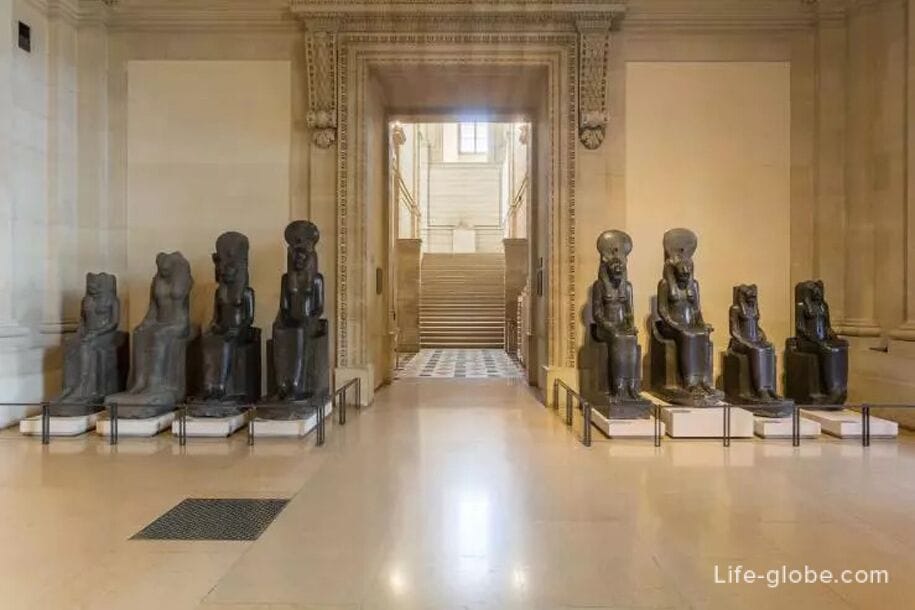 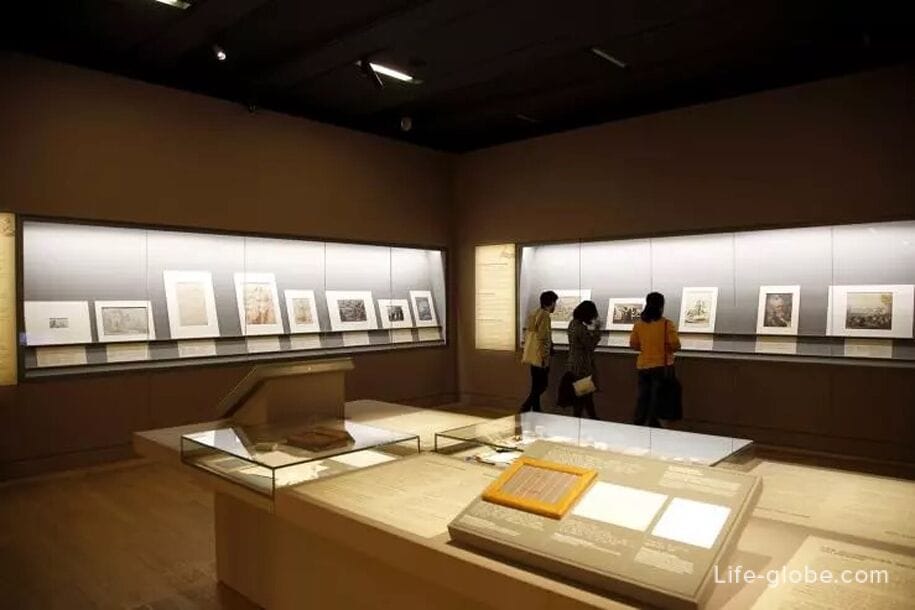 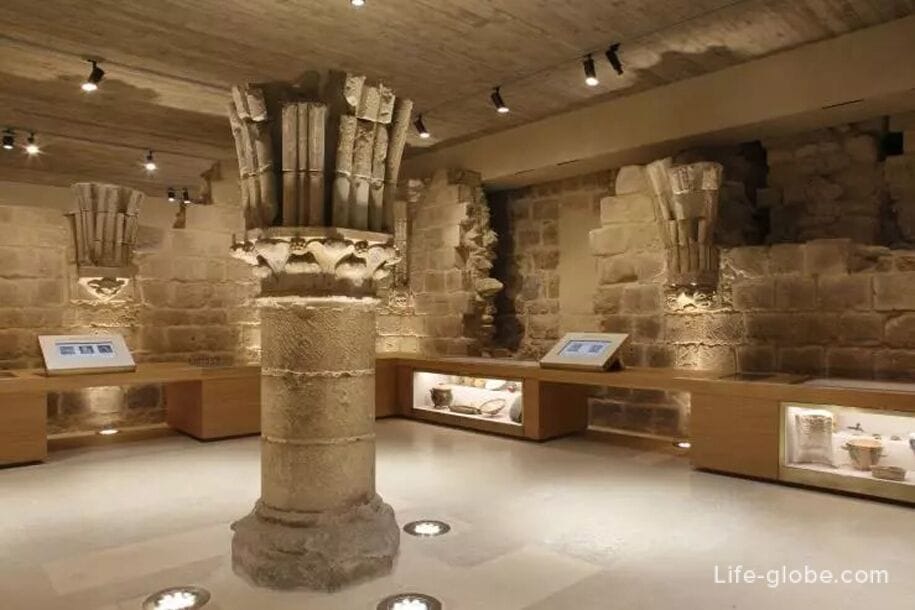 Since the Louvre, before becoming a museum, was a royal palace, many of its halls have rich decoration and are themselves silent witnesses of history and works of art.

Some of the halls are:

The Medici Gallery (Galerie Medicis), where one of the largest painted decorations of the Paris palace is exhibited. This spacious hall was specially designed to accommodate the huge paintings by Pierre-Paul Rubens that make up the Marie de' Medici cycle. The gallery has the splendor of the state gallery, which the Queen, after returning from exile, arranged in her Luxembourg Palace. 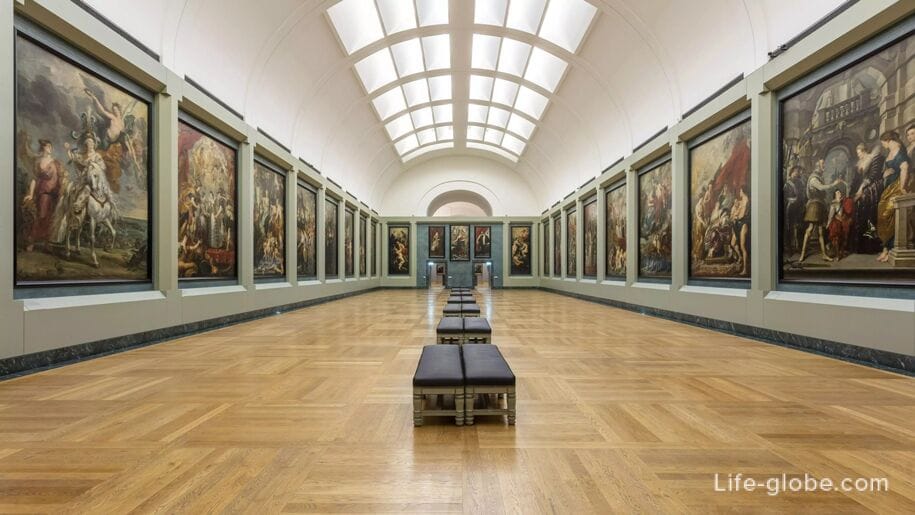 The Molien Room (La salle Mollien) is the color of the walls that gave the name to these huge halls, which house the largest canvases in the Louvre, including masterpieces of French painting of the 19th century, from David to Delacroix. 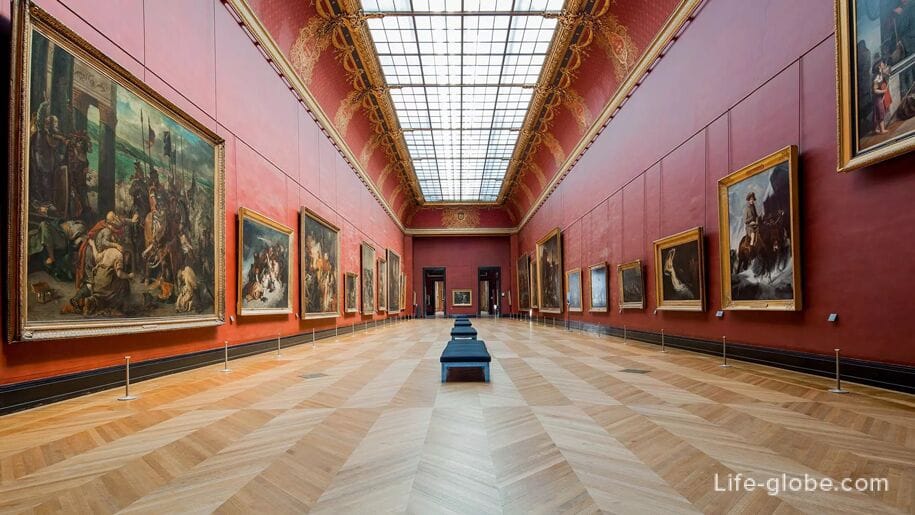 Apartments of Anna of Austria, the Julius-Claudian dynasty (reign of Augustus). First it was the summer apartments of Anne of Austria, the mother of Louis XIV, then the Antiques Gallery at the behest of Napoleon Bonaparte in 1800. The original ceilings have been preserved in these rooms. Today, in this luxurious setting, there are collections of Roman antiquities. 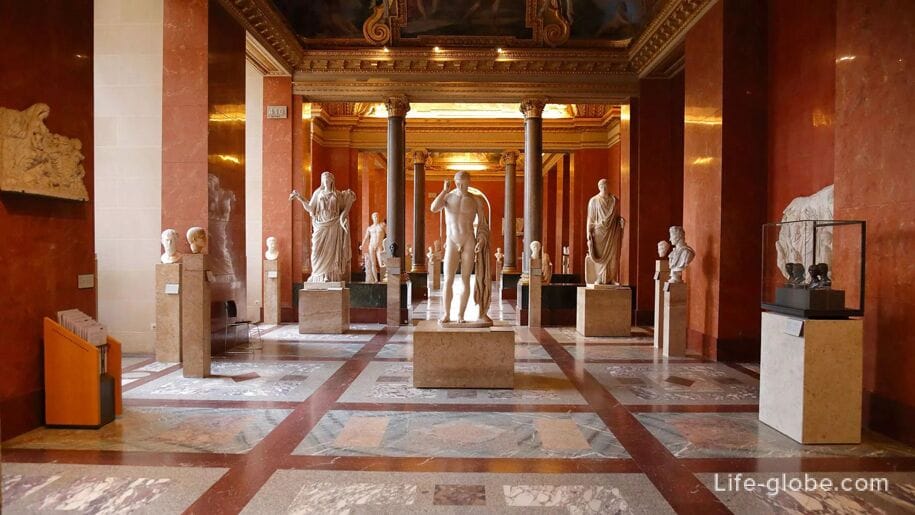 The Hall of the Caryatides (La salle des Cariatides), which is probably one of the most beautiful architectural evidences of the Louvre of the Renaissance. The Ballroom of the Kings of France marks the beginning of a new artistic style in Paris. And since the 17th century, a prestigious collection of ancient sculptures has been housed under its spacious vaults. 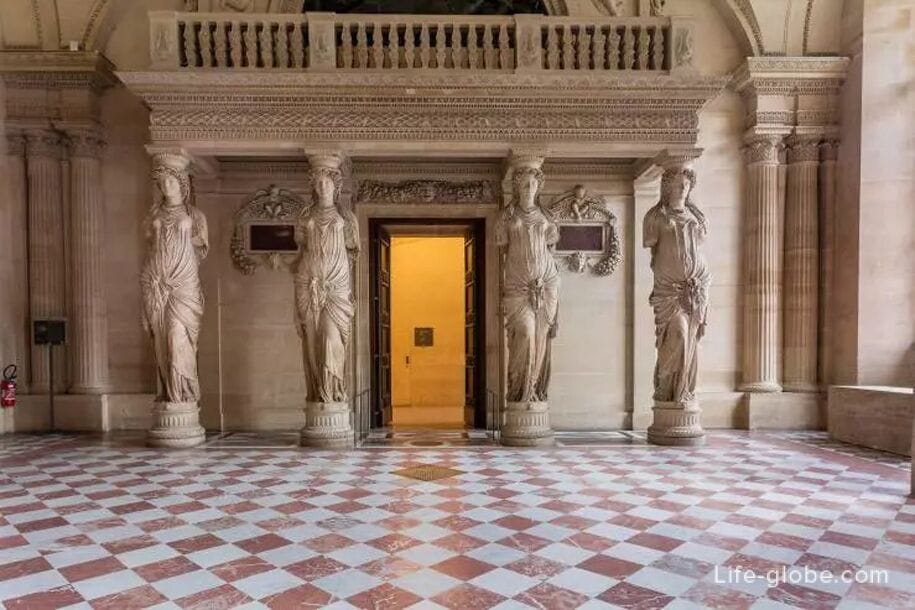 Galerie d'Apollon, where Louis XIV first linked his royal power with the divinity of the sun. To achieve this masterpiece of architectural decoration, combining painting, sculpture and gilding, Louis surrounded himself with the greatest artists who worked a few years later in the Palace of Versailles, in the Hall of Mirrors. Today, the Apollo Gallery houses the royal collection of precious stones and Crown diamonds. 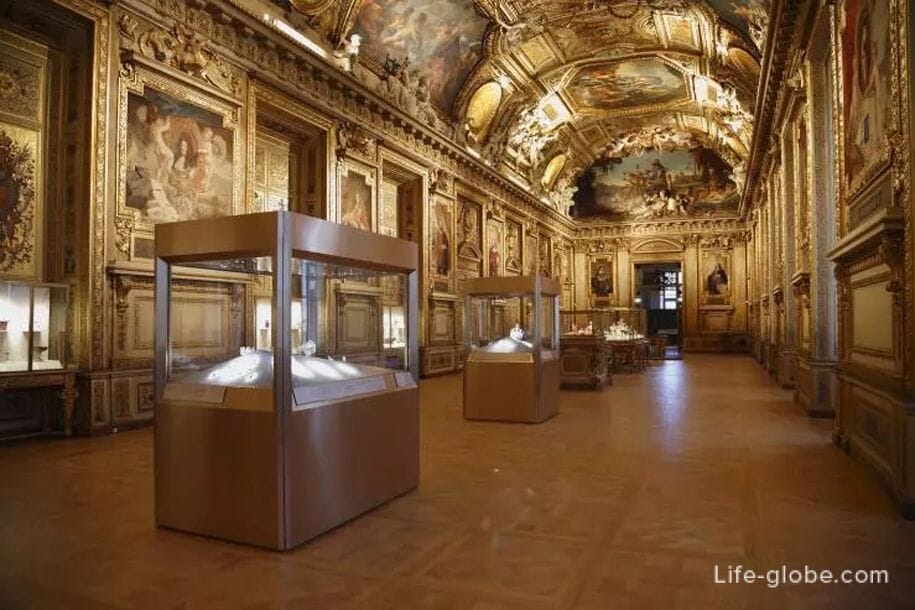 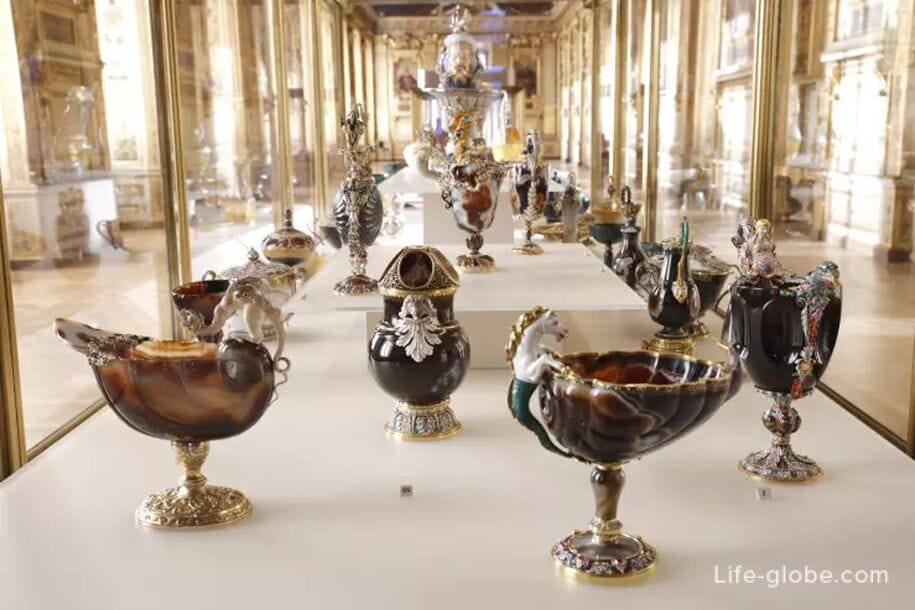 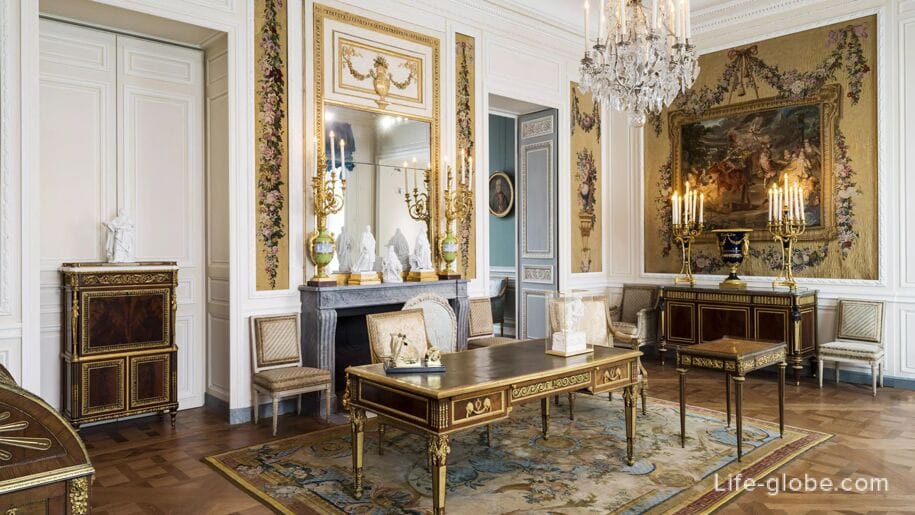 Apartments of Napoleon III, a large living room (Apartments Napoleon-III, le grand salon), visiting which you seem to go back in time and find yourself in the new chambers of the Minister of State. Emperor Napoleon III reserved part of the new Richelieu wing for his minister. 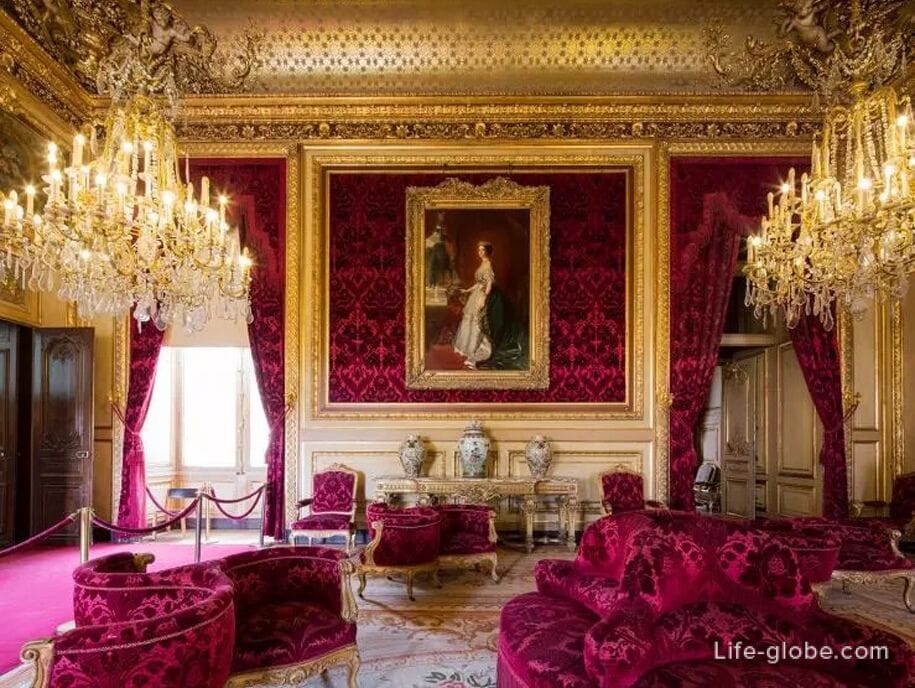 The Richelieu Wing (the northern wing bordering the Rue de Rivoli), which is the latest in the long history of the construction of the Louvre. The wing was completed under Napoleon III and housed the Ministry of Finance for more than a century, from 1871 to 1989.

Masterpieces of French sculpture are displayed under the glass roofs of the courtyard of Marly and Puget. Statues collected in the Louvre were often intended for the street, in particular for the gardens of the Palace of Versailles or the Tuileries. 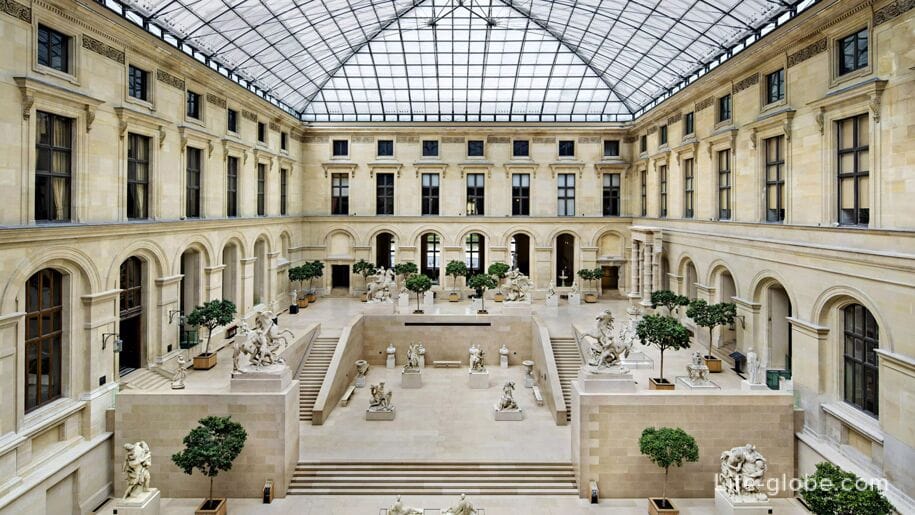 The northern west wing of the Louvre Palace, known as the Marsan Pavilion, is occupied by the Museum of Decorative Arts (Musee des Arts Decoratifs), which is the largest museum of decorative and applied arts in continental Europe.

Temporary exhibitions are also held in the museum.

This is a separate museum, which is not connected with the Louvre Museum, and admission to it is paid separately. 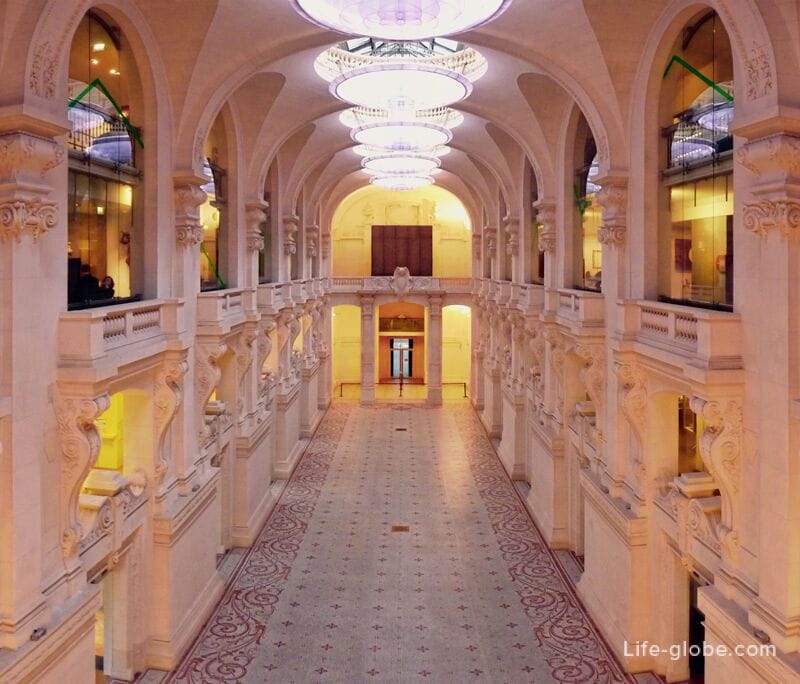 Practical information about the Louvre Museum

The Louvre Museum has museum branches in the city of Lens and in Abu Dhabi.

The Louvre in Paris is open every day except Tuesdays and public holidays (January 1, May 1 and December 25). Museum opening hours: from 09:00 to 18:00; last entry 1 hour before closing.

Admission to the Louvre Museum in Paris is paid, except for persons under 18 and under 26 years of age residents of the European Economic Area.

A ticket to the Louvre includes a visit to permanent collections and temporary exhibitions; as well as the National Museum-Workshop of Eugene-Delacroix (Le musee national Eugene-Delacroix) on the same day and the day after visiting the Louvre.

An audio guide can be rented at the Louvre Museum.

Excursions to the Louvre

The Louvre Museum is located in the center of Paris, on the right bank of the River Seine, on Rue Rivoli, in the 1st arrondissement of the French capital.

Rent a car in Paris (all places, including airports and the city center) →

All accommodation facilities in Paris, including in the city center and more remotely from it, can be viewed and booked here 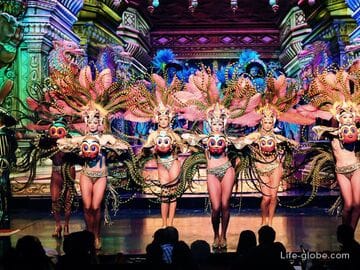 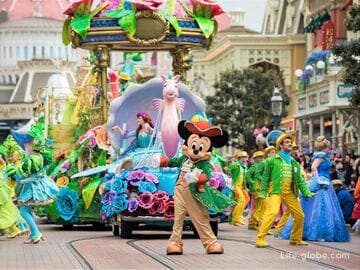