Airport regularly sends and receives flights from many countries around the world, including direct flights linking the Catalan capital with the cities of Europe. Cheap tickets to Barcelona...

Currently, the airport operates two terminals T1 and T2. The terminal T2 comprises the sectors A, b and C. the Terminals are located at a remote distance from each other, to get from terminal to terminal is free and runs round-the-clock Shuttle bus. 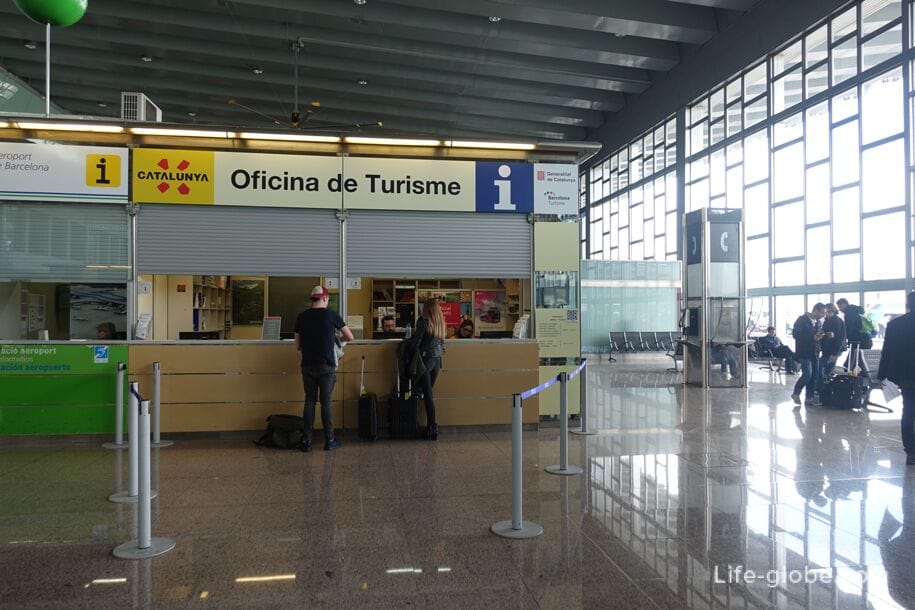 Barcelona airport has developed transport links to the city centre, so that, at any time of the day you can easily get from the airport to the center or from the center of Barcelona to the airport.

To get from Barcelona airport to Barcelona city centre and other towns and resorts along the coast of Catalonia more convenient and faster than a taxi. Book a taxi/Shuttle service is possible in advance, even from home. At any time of the day, at the airport, you will meet your driver with a sign, which will be written your name and surname. For taxi is enough to tell us your flight details! To know the cost of taxi ride here...

If you are planning to travel to Spain, then the ideal option would be to rent a car. To choose and order a car in advance, at the appointed time, your car will be waiting for you outside the airport. The rental price starts from 14 Euros per day. To see and pick up the car here...

In addition to a taxi from the airport to centre and from centre to Barcelona airport can be reached by public transport: bus, metro or commuter train. In public transport, children under 4 years free pass, does not apply to airport Shuttle buses.

The metro will take you to the University zone (Zona Universitaria). From this station to the centre (e.g. plaça Catalunya) for another 5.6 kilometers. That is, the metro to the tourist centre of Barcelona will have to go instead. At the stop Zona Universitaria, you can change to metro line L3 to plaça de Catalunya and Columbus monument and La Rambla. Metro map...

The metro ride from the airport to Barcelona takes 32 minutes. The metro runs daily:

- Saturday from 5:00 until midnight Sunday;

The fare is €4,60. Ticket T-10 and a normal single journey ticket on the metro to the airport is not valid, you need to buy a separate ticket. Also, for those who want to drive around Barcelona a lot of times you can use 2-, 3-, 4 - and 5-day Hola BCN card, 48, 72, 96 or 120 hours, respectively, after the first activation of the card. Hola BCN - transport pass, which can be used at any time of the day and unlimited trips in metro, bus (TMB) and the rest of the public transport network of Barcelona.

Train - quick option to get the traffic from Barcelona airport to Barcelona city centre.

You can purchase tickets at vending machines located at the stations.

Ticket T-10 convenient to purchase if you intend to move to Barcelona to continue or you are some people. The T10 ticket is 10,20 Euros and entitles you to 10 trips on public transport in Zone-1 of Barcelona for one calendar year and expire generally at the end of February next year. In Zone-1 is located all the main attractions of the city. The time allotted for each trip is 1 hour and 15 minutes and during this time, you can make up to three connections, that is, it is possible to use up to four modes of transport (you only need to keep track of time) and it will be counted as one visit. Also the ticket at the same time can be used by several people (up to ten), passing the map to each other.

The bus for 35 minutes will take you to the city centre. The fare 5,90 € one way and 10,20. A ticket purchased there and back for the return journey is valid within 15 days after the first trip.

Tickets are available from machines at the bus stop. You can pay by cash or card. At plaça Catalunya, near the bus staff will help you to purchase a ticket, if they themselves can not cope. You can buy tickets in advance - online.

Each terminal runs its own Airbus:

On Plaza Catalunya there is a bus stop located on the right side of the square if facing the square and back to La Rambla. 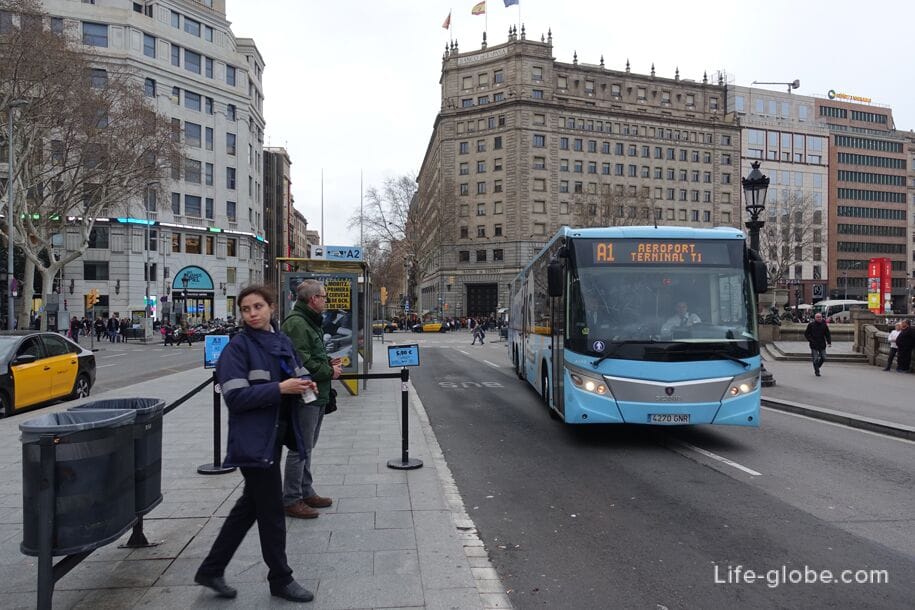 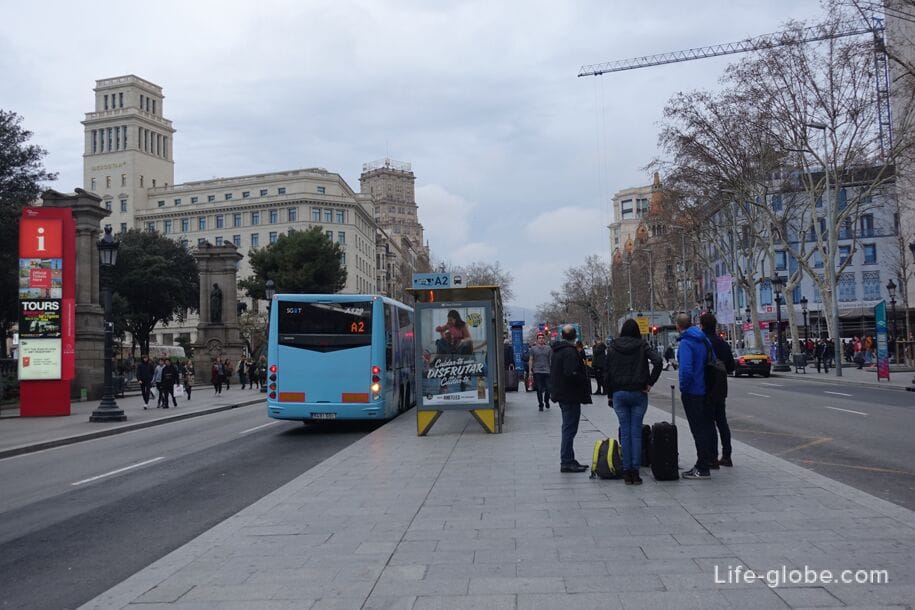 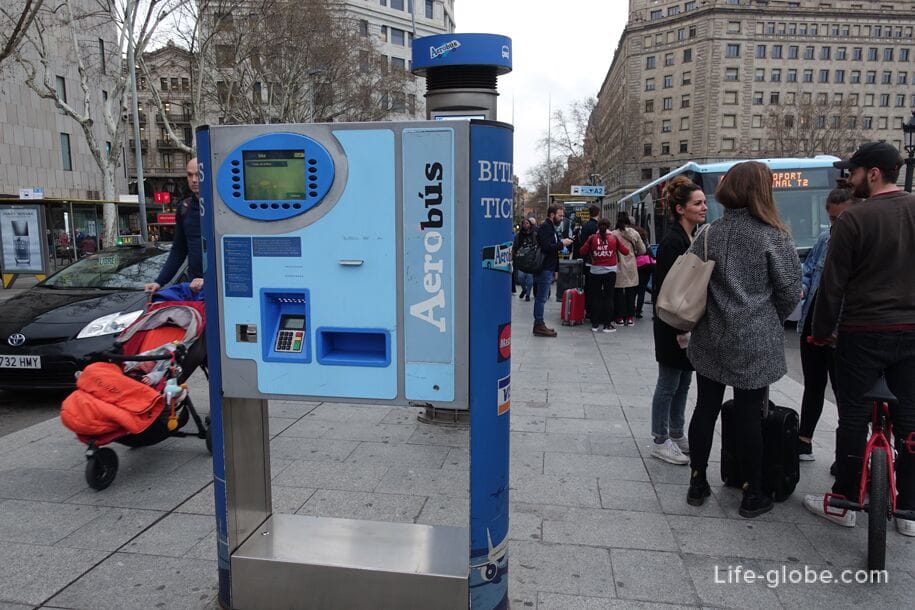 Ordinary city bus. The cost per journey € 2.20, also apply card a T-10. For travel you can pay the driver when boarding but the card the driver not to buy (must be purchased in vending machines).

Night line bus number 16 connects the Barcelona area of Catalonia Castelldefels and passes through Viladecans and Gavà, stopping in the terminal T2 of the airport.

Night line bus No. 18 connecting terminal T1 of the airport to plaça de Catalunya in Barcelona, with a stop at the terminal T2 in the direction of Barcelona. 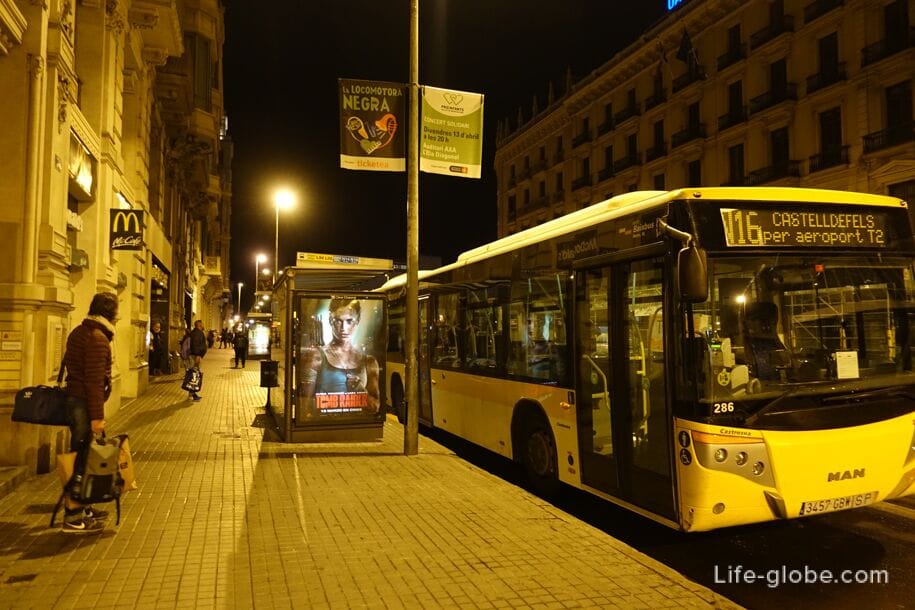 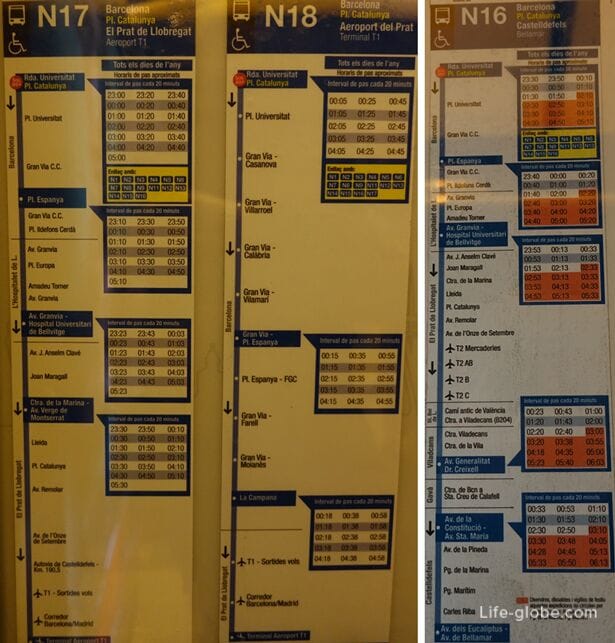 Tickets for buses from Barcelona to other cities in Spain, France, Switzerland, Andorra and other cities and countries of Europe, it is possible to look and book here. 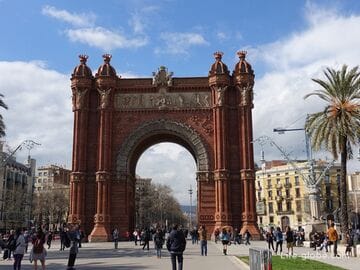 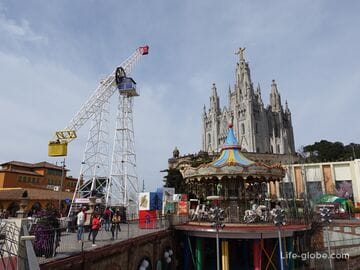 Tibidabo in Barcelona: Temple of the Sac... 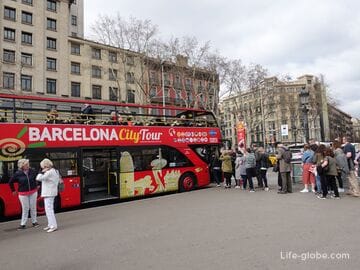 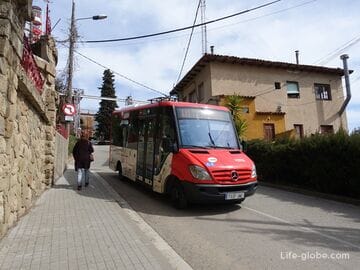