The firecracker fountains are one of the fountains located in the Lower Park of the Peterhof Palace and Park Ensemble in Peterhof (Saint Petersburg).

Lower Park The Grand Palace of Peterhof is considered one of the best parks in Russia, as well as a fountain park. The park has an area of 102.5 hectares, which are decorated, including about 150 fountains, among which stands out a group of fountains, especially loved by children and adults - these are the firecracker fountains. 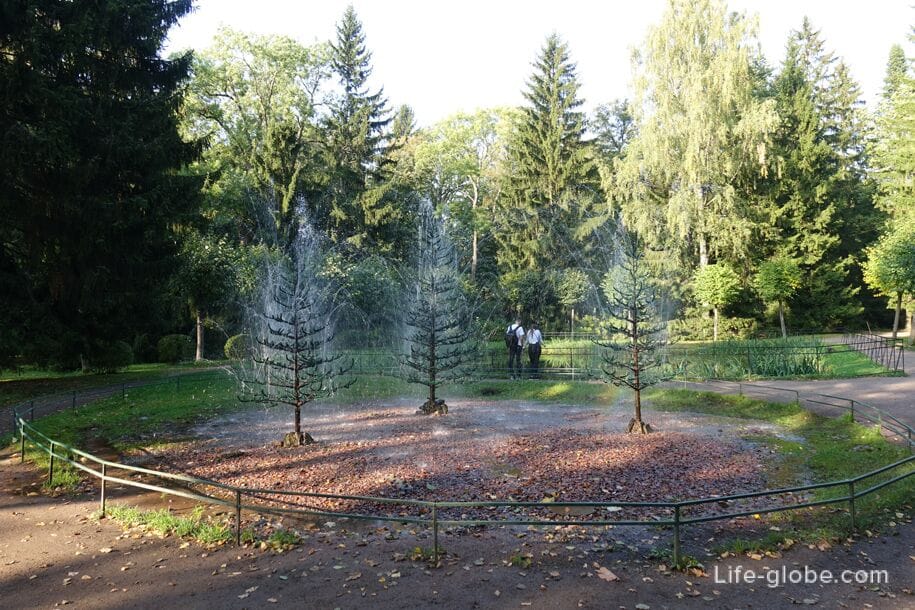 Fountain-firecracker-water fun, - a kind of hidden fountain with a comic surprise, disguised as familiar objects or hidden in the landscape, and the idea of which is that the water jets of the fountain appear unexpectedly and spray visitors, thereby creating a playful mood and immersing guests in the atmosphere of the game.

Fountains-firecrackers were one of the frequent elements of the ceremonial residences of the regular park style, including such fountains were created in the Lower Park under Peter I. The emperor liked to amuse himself by watching hidden fountains spray the expensive clothes of high-ranking and noble guests of the royal residence.

Only in the Lower Park are seven fountains, firecrackers, five of which (Tree, oak, Umbrella, Water, road and Sofas) are located near each other in the Eastern part of the Lower Park, which is called "Monplaisir" (located here from the ensemble of the Monplaisir Palace), and two fountain-crackers ("Table with sprinkling" and "Water curtain") - in the caves of the Grand cascade fountain in Central Park.

Firecracker fountains in Peterhof are small fountains that do not differ in the sophistication of architecture, shape, size and power of water jets, because they had a different purpose. Today, fountains no longer pour over guests unexpectedly (as a rule), they just work, and are also turned off.

The "Christmas Tree" cracker is a group of three small gushing metal trees.

The water pipes of the fountain are treated like the trunk and branches of a tree and are covered with wire "needles", from which thin streams of water flow.

The fountain was originally built in 1784 by the masters I. Keizer and F.A. Strelnikov. When the guests of the garden approached these fountains, taking it for real trees or decorations, then trickles of water began to beat from disguised pipes, for fun, dousing the guests with water.

The fountain was destroyed during the Second World War and recreated in 1958 by the team of the fountain fitter A. Smirnov. 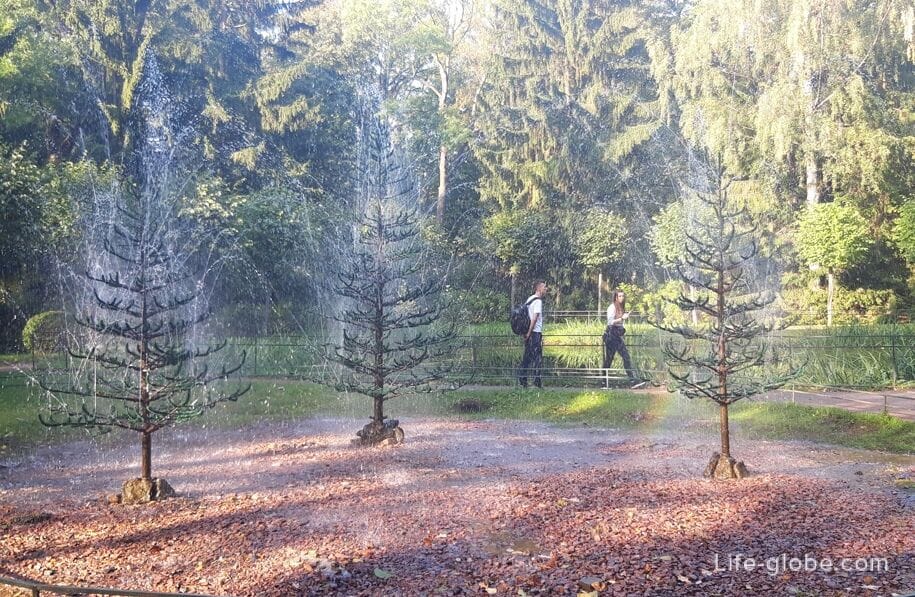 Video of the fountain-Christmas Tree crackers

The fountain-firecracker "Dubok" was created in 1735 on the model of the sculptor B. K. Rastrelli and originally decorated one of the round pools The Upper Garden of the Grand Peterhof Palace. In the middle of the 18th century, the fountain was removed from the garden and in 1802 installed on its current place in the Lower Park. The gold-covered fountain was given a look more suitable for a landscape park: the " Oak " was painted under a natural tree and turned into a fountain complex consisting of several water amusements.

The fountain was lost during the war. Then, according to the surviving drawings and the surviving twig with leaves, the masters father and son Lavrentievs in 1953 re-created the tree: a metal trunk, 500 tubular branches and 2500 leaves.

Today, the fountain is a complex consisting of an oak tree, five tulips and two benches near the oak tree.

The hollow trunk of the tree, lined on the outside with lead, imitating the bark, has a height of 6 meters, is filled with water from the root to the top and to the tip of each branch, from where water jets beat. Around the Oak Tree are large gushing tulips, and next to them are two wooden benches, behind the backs of which are hidden 41 tubes, from which jets of water can suddenly escape, dousing passing guests. 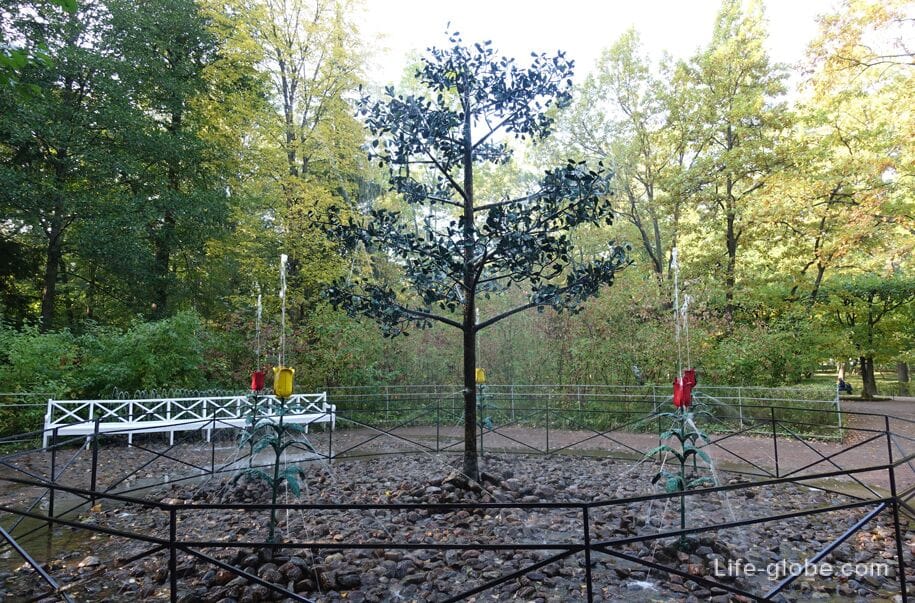 The "Umbrella" firecracker was created in 1796 by the project of the architect F. Brouwer under the influence of "Chinese" buildings in Tsarskoye Selo.

The fountain is shaped like an umbrella (and someone - a mushroom): a massive pillar supports a wide, bright green roof, complete with a carved flower. At the bottom of the pillar, under the roof of the fountain, there are chairs with carved elbows.

In the time of the emperors, guests strolling through a large park got tired, saw attractive places to relax under the roof and went to them to rest; and as soon as the guests gathered under this roof, elastic jets began to flow down from one hundred and sixty-four tubes hidden behind the carved festoons of the roof, forming a dense water curtain, which forced the guests to either continue to sit or run over the water curtain and thereby wet their outfits.

In the 60s of the 19th century, the roof of the fountain was given the appearance of a mushroom-fly agaric. From then until 1949, the fountain-firecracker was called "Fungus". In 1949, during the restoration, the fountain returned to the original appearance of the roof, but the name "Fungus" is still walking among the locals. 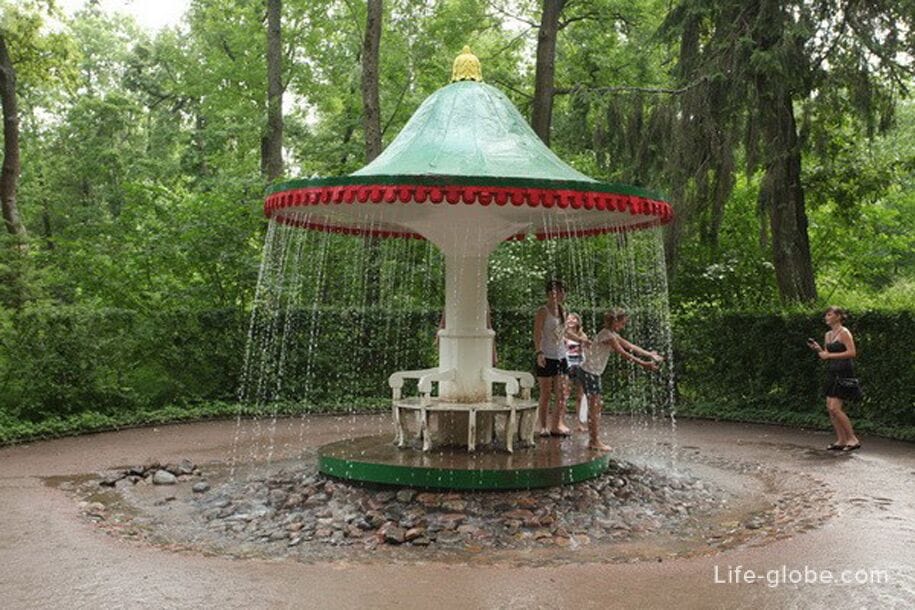 The "Water Road" firecracker is located on the Montplaisir Alley of the park - from Roman fountains to the monument to Peter I. 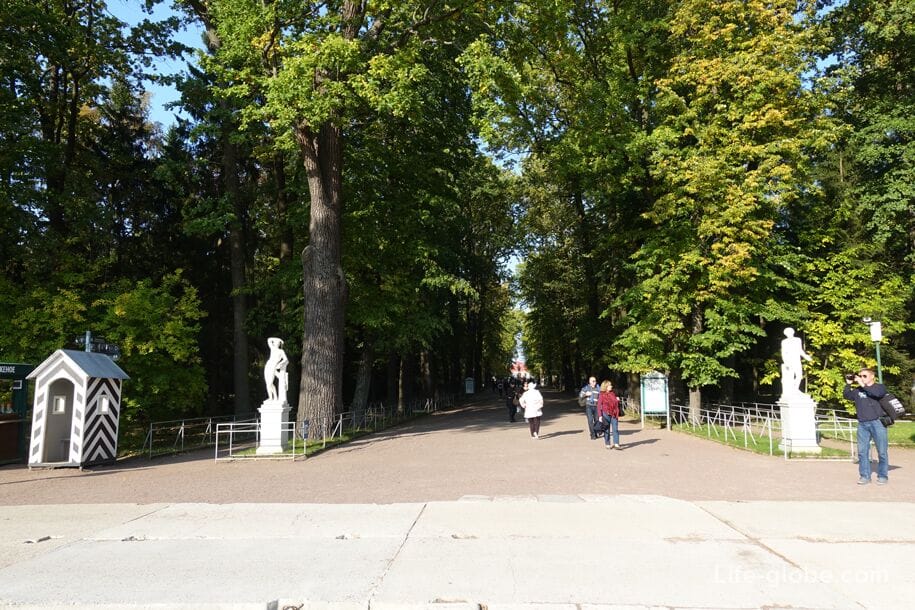 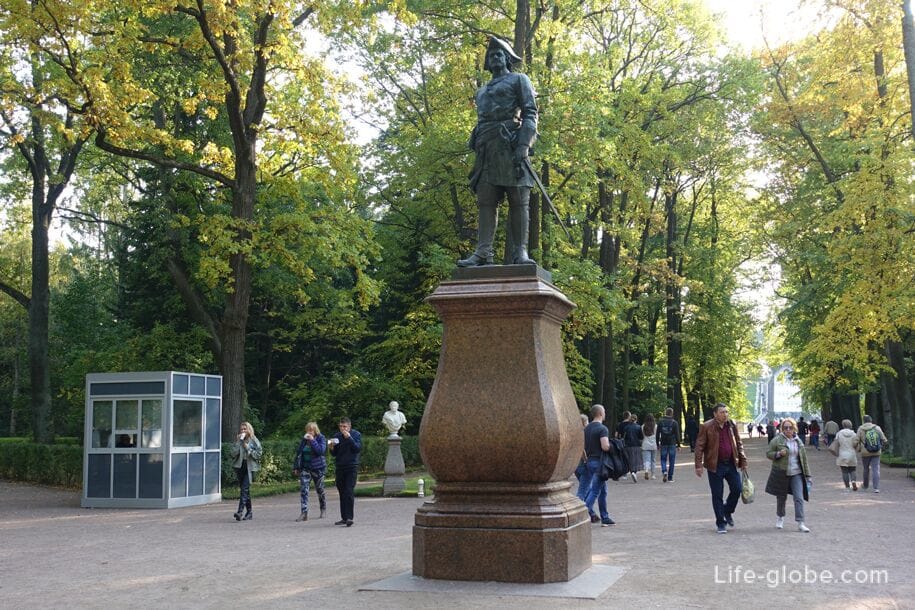 This fountain was built according to the idea of Peter I by the architect N. Michetti, and the first water launch took place in 1721. According to the tsar's plan, a significant part of the alley was suddenly blocked by a water arch of three hundred jets, which beat from inconspicuous pipes along the alley and, thus, all the strollers were wet from head to toe. In Peter's time, these firecrackers were called "The Wet Road".

However, soon after the opening, the fountain disappeared. Most likely, such fun seemed to many too rude and provocative.

For a long time, the firecracker did not work. It was opened in May 2001. The restoration of the "Water Road" was based on the preserved drawings and descriptions of the fountain of the 20s of the 18th century.

Today, the fountain-firecracker "Water Road" no longer comes as a surprise to guests, except for those who are not familiar with this information. Now this firecracker is turned on strictly according to the schedule - in the summer season, three times a day, for one minute: at 13: 00, at 14: 00 and at 15: 00. Attention! The launch time of the fountain may change, we recommend that you check the information before visiting or during a visit to the park at the ticket offices near the park or with park employees. 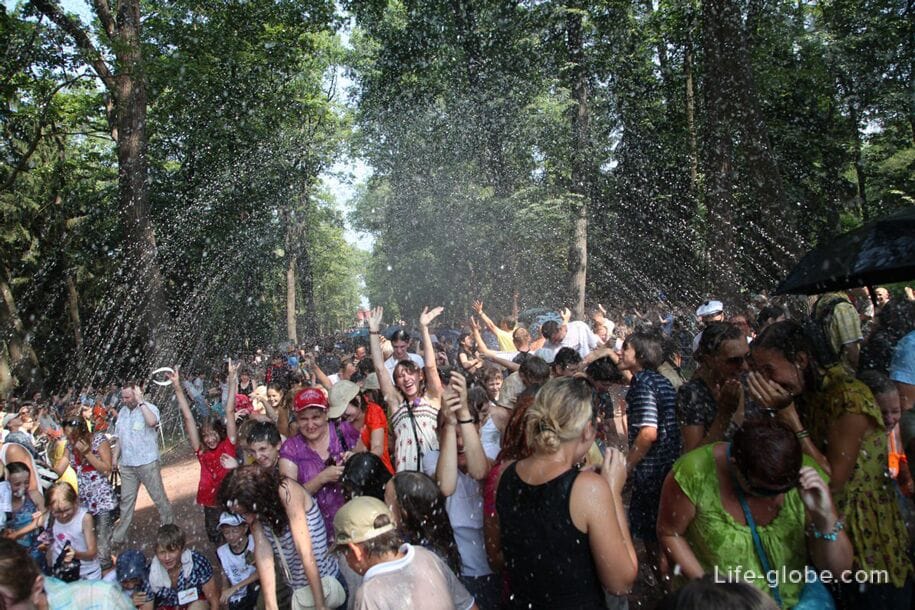 Firecrackers "Sofas" are located in the southern corners of the Montpliser Garden - one on each side; there are only two identical fountains.

These are the oldest of the Lower Park firecrackers that have survived to our time. They were created according to the drawings of N. Michetti, personally corrected by Peter I, and "tested by water" in 1723. Since then, the appearance of the fountains has not changed.

Fountains are street benches that look like "Sofas", the appearance of which was characteristic of the 18th century and is a park structure of the trellis type with lattice backs and legs. On the curved backs in the middle are mounted mascarons of newts-examples of decorative sculpture of the 1720s.

Near the benches-sofas there are stone platforms from which water jets beat, which in imperial times were a "surprise" - water jets beat only when the guest stepped on the stone platform in front of the bench; water poured over the hems of magnificent dresses, which amused others. Read more about the fountains-firecrackers " Sofas»… 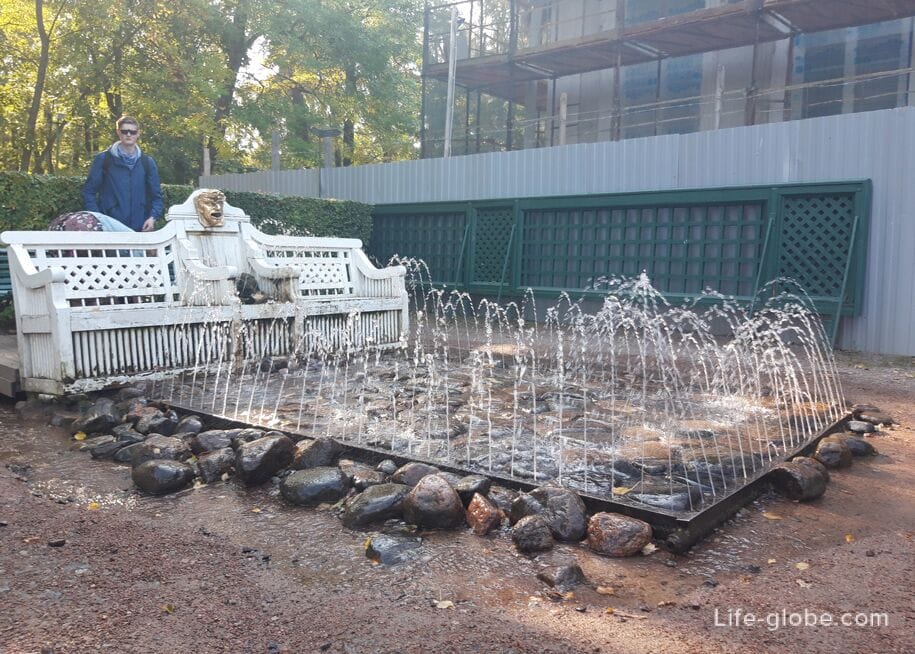 Firecracker fountains in the grottos of the Grand Cascade

In the central Front part of the Lower Park, right at the foot of the Grand Peterhof Palace, a magnificent and powerful fountain, the Grand Cascade, descends down the slope.

The center of the Grand Cascade is the grottos - the Upper and Lower ones, which, like the fountain, were built according to the idea of Peter the Great.

Once upon a time, the owners and guests of Peterhof loved to spend time in the Big Grotto. In the grotto, according to the idea of Peter, but after his death, were installed fountains-firecrackers - "Table with splashing" and "Water curtains".

In the center of the table were placed glasses of drinks and vases of fruit; but when the guest stretched out his hand to the table, then, from the tubes laid along the edge of the table, began to beat thin streams of water, drenching those gathered around. At the exit from the grotto, the guests were waiting for another surprise - a dense water curtain blocking the way. Such jokes were common in the 18th century. There are also other firecracker fountains in the Lower Park of the palace.

Today, the grottos are a museum that you can visit for a fee. Learn more about the grottos, fountains of the Grand Cascade and Samson... 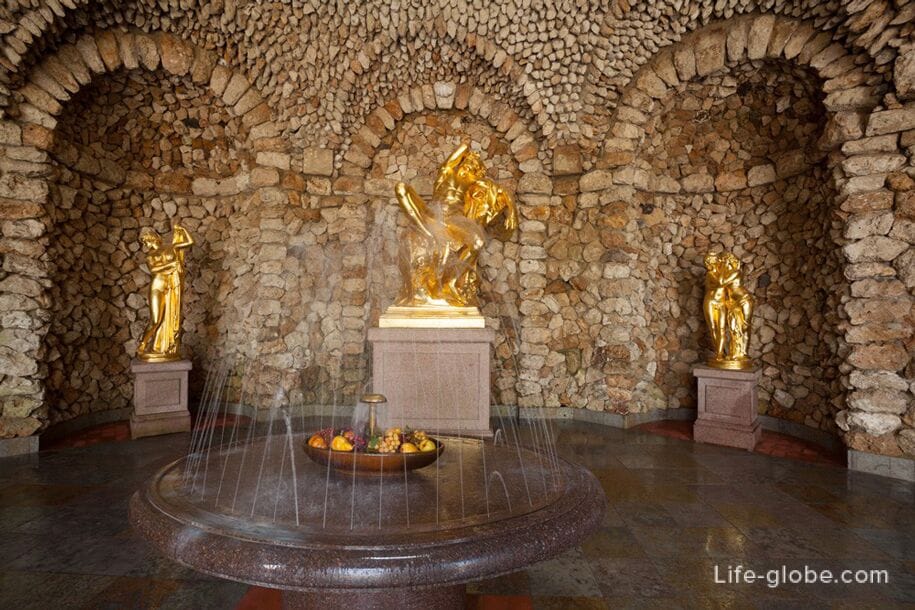 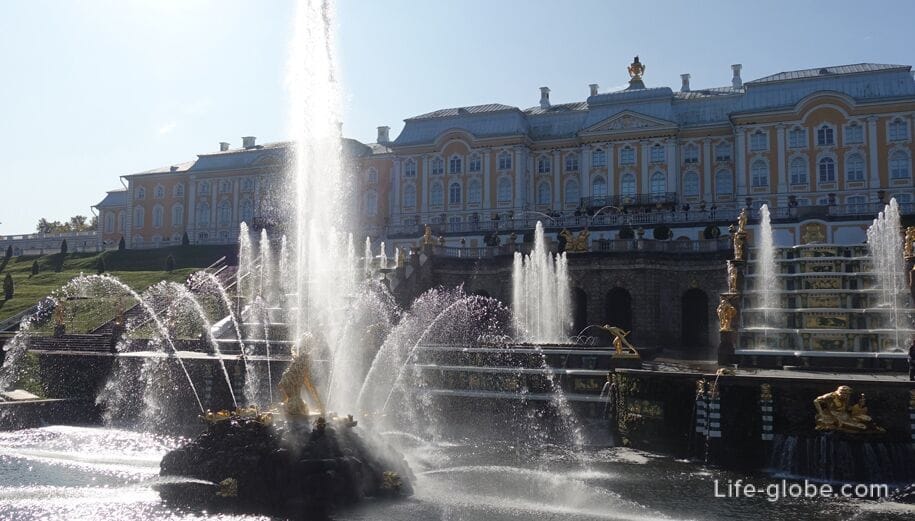 The firecracker fountains are located in the Lower Park of the Peterhof Palace and Park Ensemble, which belongs to the Peterhof State Museum-Reserve.

The fountains and the grotto of Peterhof are closed for the winter (they do not work) - from about mid-October until the 20th of April.

During the summer season, the fountains and grotto are open and the entrance to the park is paid.

Entrance to the grotto museum is paid. Museum visits are not included in the entrance fee to the Lower Park - they are paid separately.

Tickets to the park and museum can be purchased at the ticket offices located directly near the entrances to the park or in advance-online on the official website.

We recommend that you check the opening hours of the park and the museum, as well as the conditions for visiting and the cost of tickets, on the website of the State Museum-Reserve "Peterhof": peterhofmuseum. 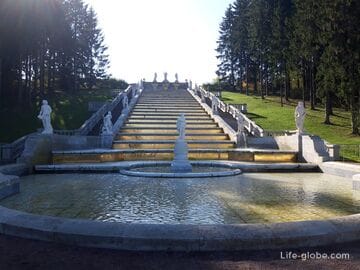 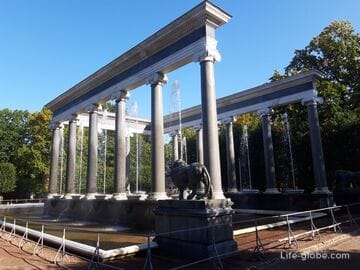 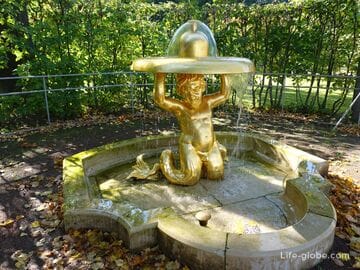