Tomb of Kant, Kaliningrad - cenotaph near the cathedral

Immanuel Kant's grave is the burial place of the great philosopher of the 18th century, which is located in the city of Kaliningrad.

Immanuel Kant (German: Immanuel Kant; April 22, 1724 - February 12, 1804) was a German philosopher who had a broad influence on the history of modern Western philosophy, who was born, lived all his life, and died in Konigsberg, Prussia (now the city of Kaliningrad, Russia).

Immanuel Kant was buried in the "professorial tomb", which since 1588 was located at the north wall of the choir of the Konigsberg Cathedral. The cathedral was the main temple of East Prussia and also served as the resting place of the most prominent representatives of the secular and spiritual hierarchy. Kant's grave in 1804 became the last in the honorary row of tombs of the cathedral.

In 1924, on the occasion of the philosopher's 200th anniversary, a powerful portico was erected over the grave by the Konigsberg architect Friedrich Lars, which can still be seen today. 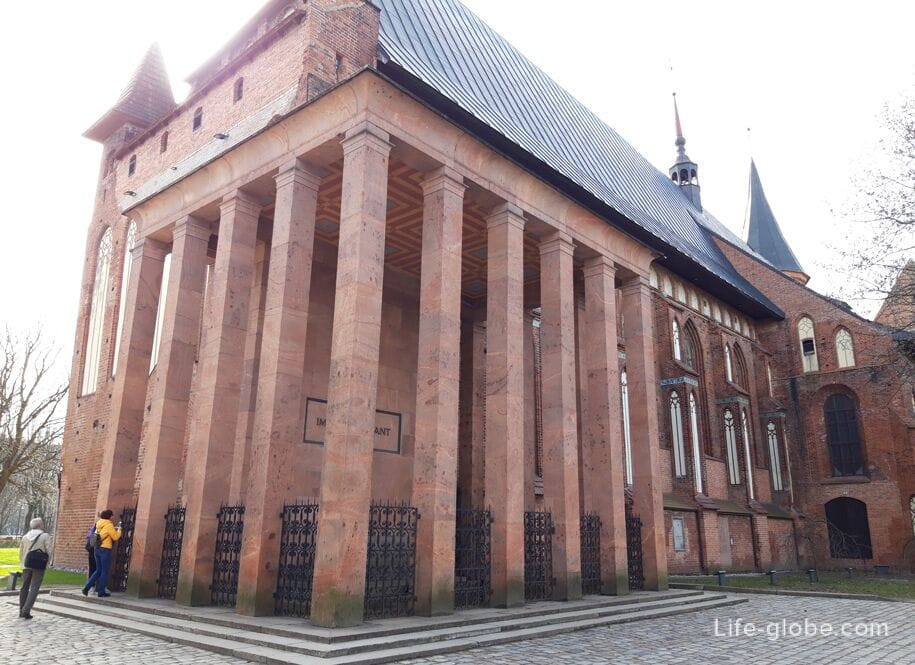 During the Second World War, the cathedral was badly damaged: everything burned out inside, the vaults partially collapsed; but it was not completely destroyed. Immanuel Kant's grave has been preserved in an amazing way with some damage.

From 1994 to 2005, work was carried out to restore the cathedral and, among other things, the grave of Kant was restored (1996). Archival materials were used to recreate the pre-war appearance of the cathedral.

Today the Cathedral is the main dominant and attraction of Kaliningrad. Concerts are held in the main hall of the cathedral with an organ, the Immanuel Kant Museum is located on three floors, and small chapels also operate in the cathedral. More about the cathedral, museum and concert hall... 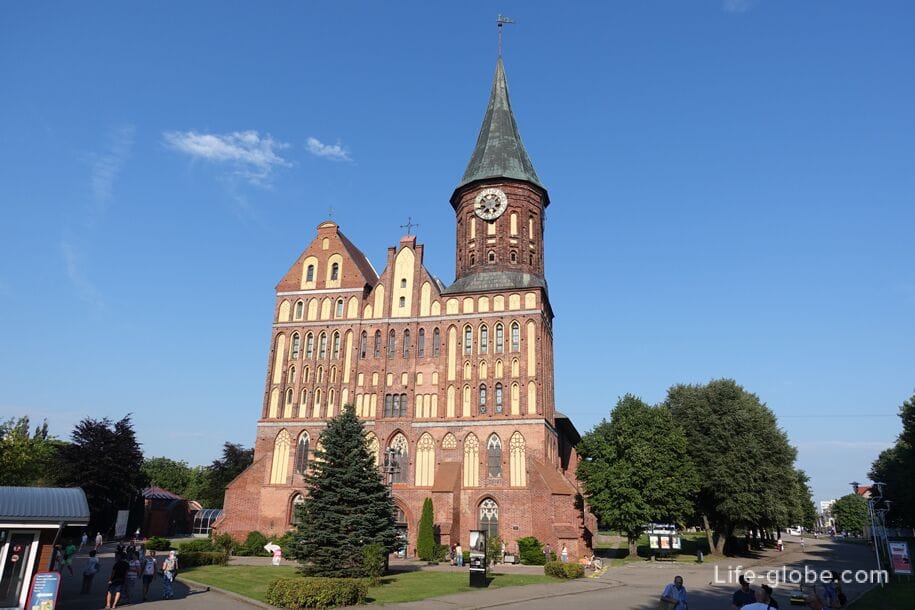 Adjacent to the north-eastern corner of the cathedral is the grave of Kant, which is located in a structure made in the form of an open pillared hall (portico). The passage to the portico is blocked by an openwork lattice.

The grave of Kant is strikingly different in architectural design from the cathedral itself. 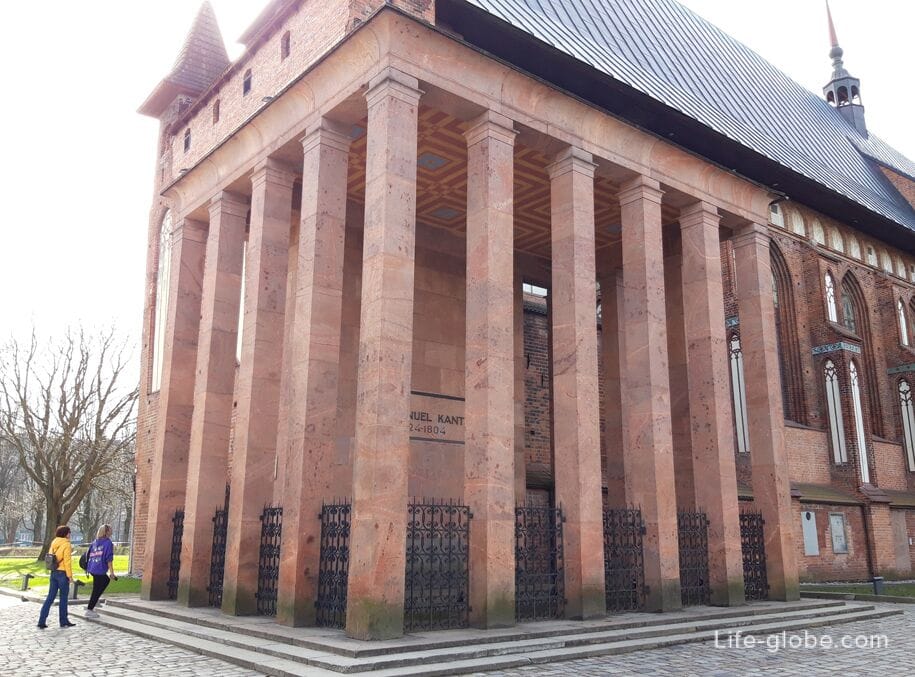 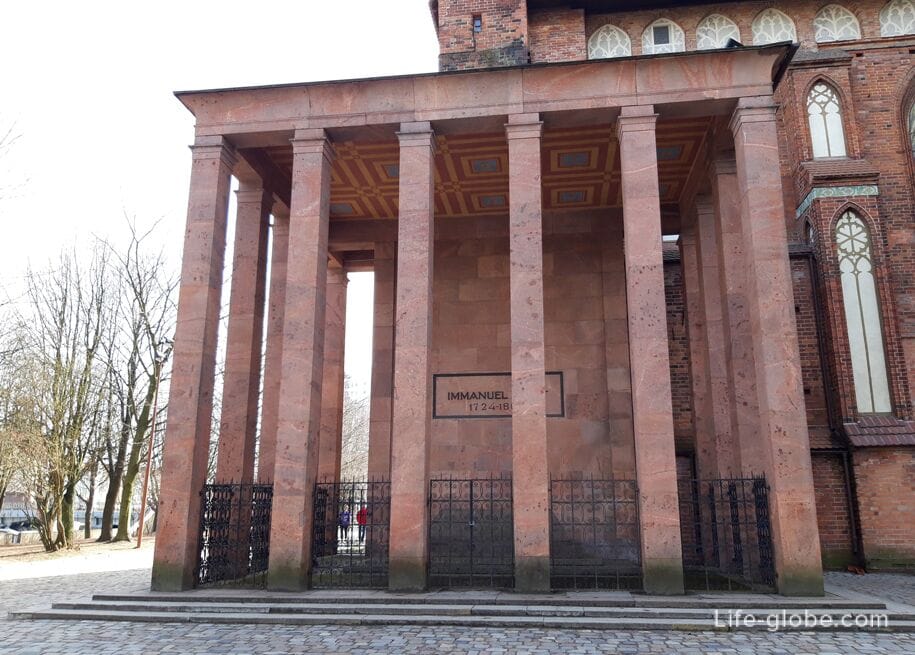 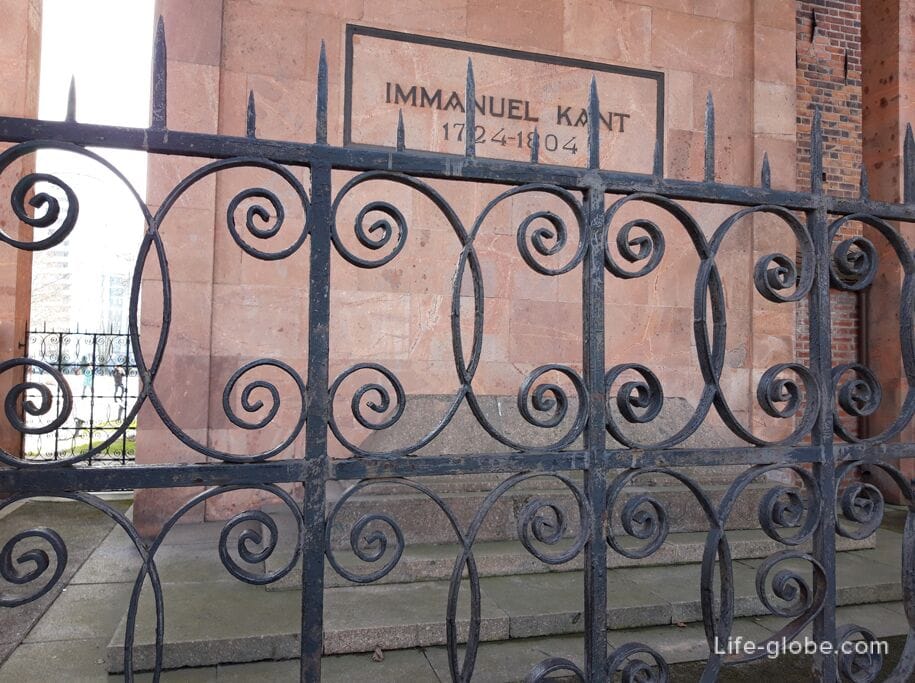 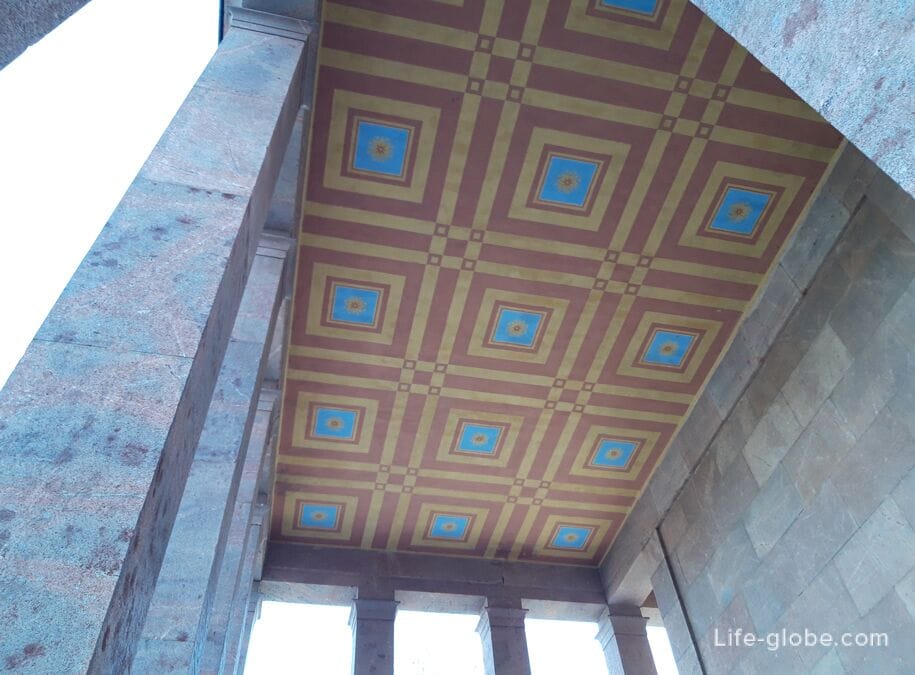 In the column tomb you can see an inscription with the dates of Kant's life and a stone coffin cenotaph. Kant's remains are not in the coffin, they are deeper.

There is a version that there are no remains of Kant deeper, since the grave was ravaged during the Second World War. 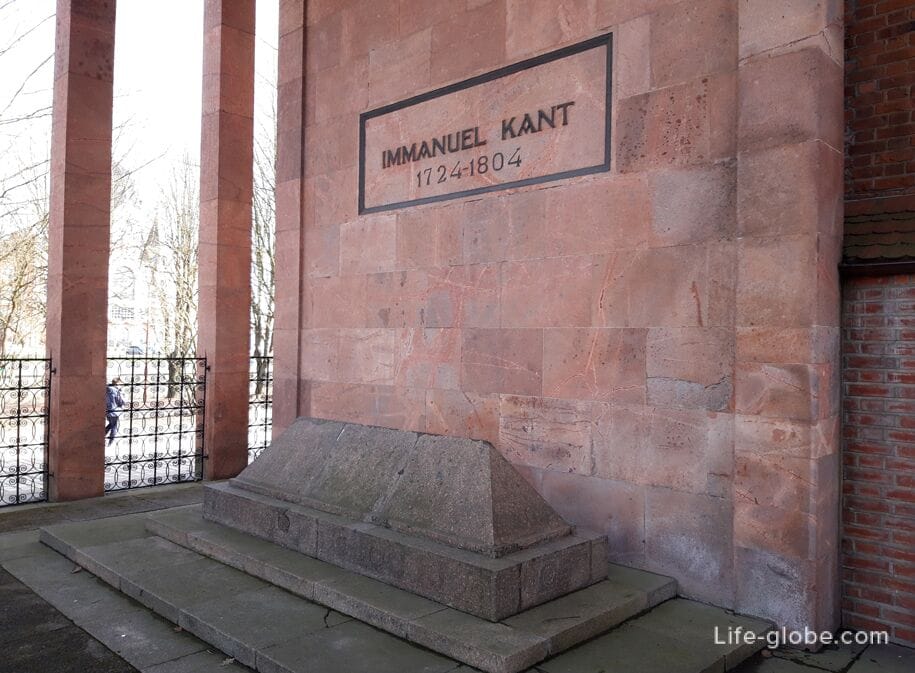 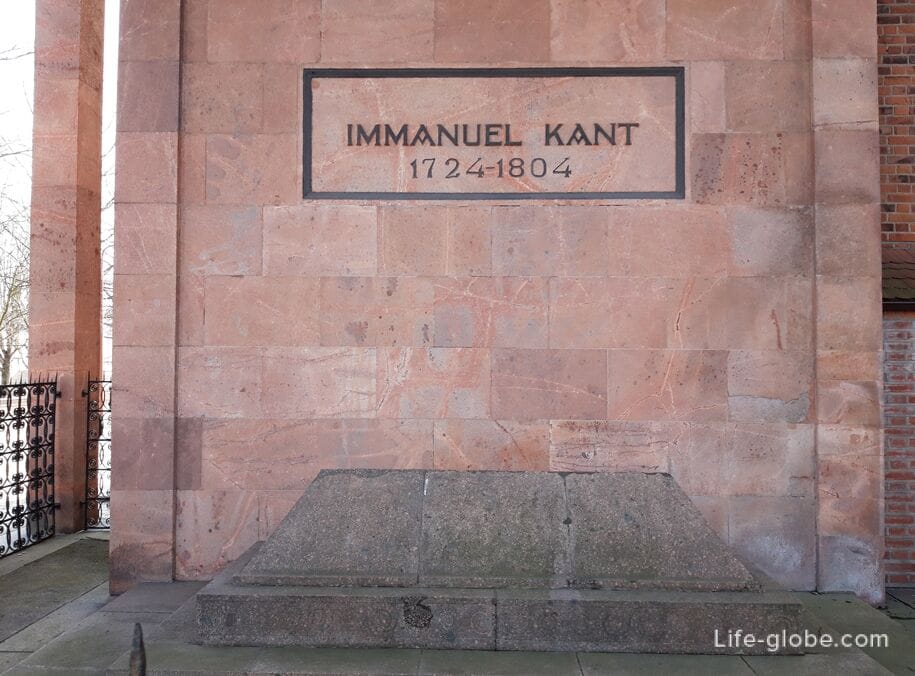 In accordance with the Resolution of the Council of Ministers of the RSFSR of August 30, 1960 No. 1327, the grave of Immanuel Kant with a tombstone and a portico is subject to state protection, now it is an object of cultural heritage of the Kaliningrad region of federal significance.

The Cathedral with the grave of Kant is located on the island of Kant, in the very center of Kaliningrad, near the New Synagogue and Fishing villages, which together represent the most visited part of the city.

Access to Kant Island and Kant's grave is free (free of charge). 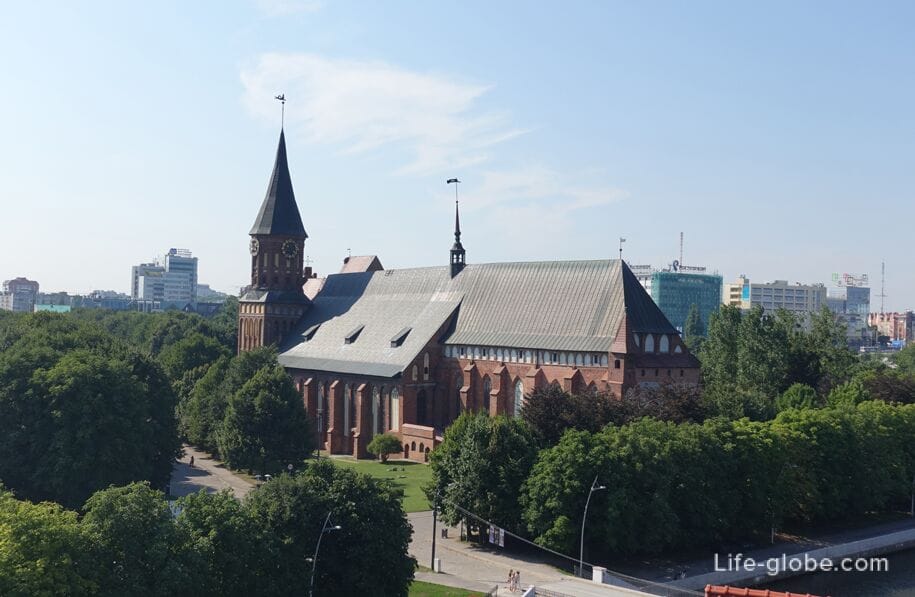 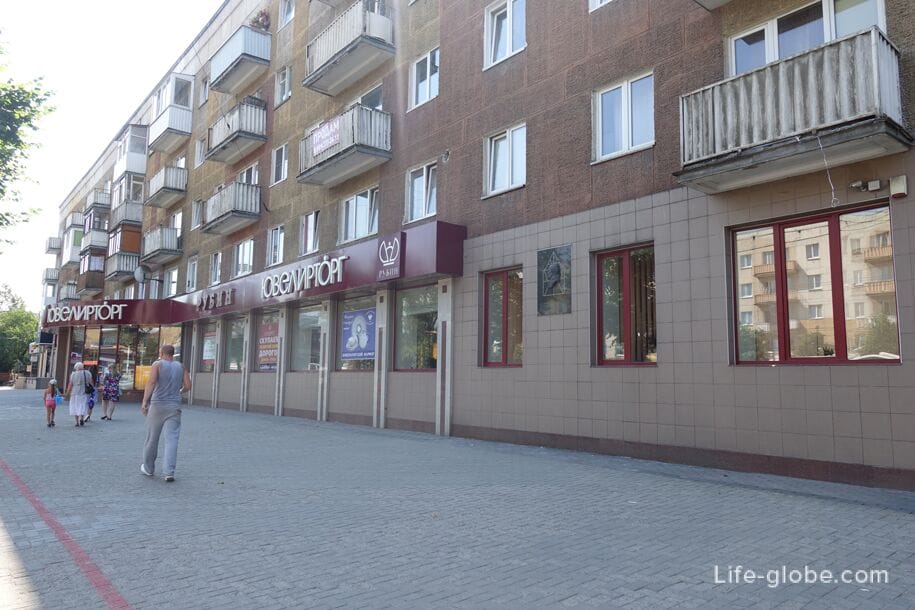 All accommodation facilities in Kaliningrad (hotels, apartments, etc.), including near Kanta Island and in the Fishing Village, can be viewed and booked here 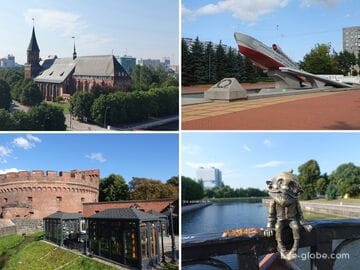 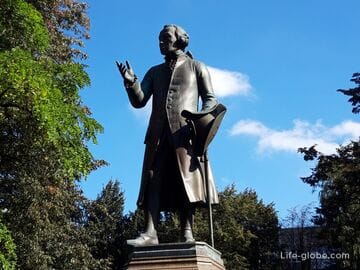