Three bridges in St. Petersburg: Malo-Konyushenny, Teatralny and False - Triple bridge across the Moika and the Griboyedov canal

Trekhmostye (Three Bridges or Triple Bridge, also Three-wheeled Bridge or Three-arch Bridge) is the unofficial name of the bridge composition in the center of St. Petersburg, which connects three islands: Spassky, 1st Admiralty and Kazan.

The three-bridge bridge is a unique bridge composition of St. Petersburg, which includes two bridges-the Theater Bridge and the Malo-Konyushenny Bridge, as well as a False bridge (or False Bridge), which is not a bridge in the literal sense of the word and represents a Pedestrian (Land) bridge-a dam.

The Malo-Konyushenny Bridge spans the Moika River at the place where the Griboyedov Canal flows out of it. In turn, the Theater Bridge spans the Griboyedov Canal at the place where it flows out of the Moika River. And the Land bridge-the dam is located next to the Theater Bridge - is adjacent to it, being an integral part of it. 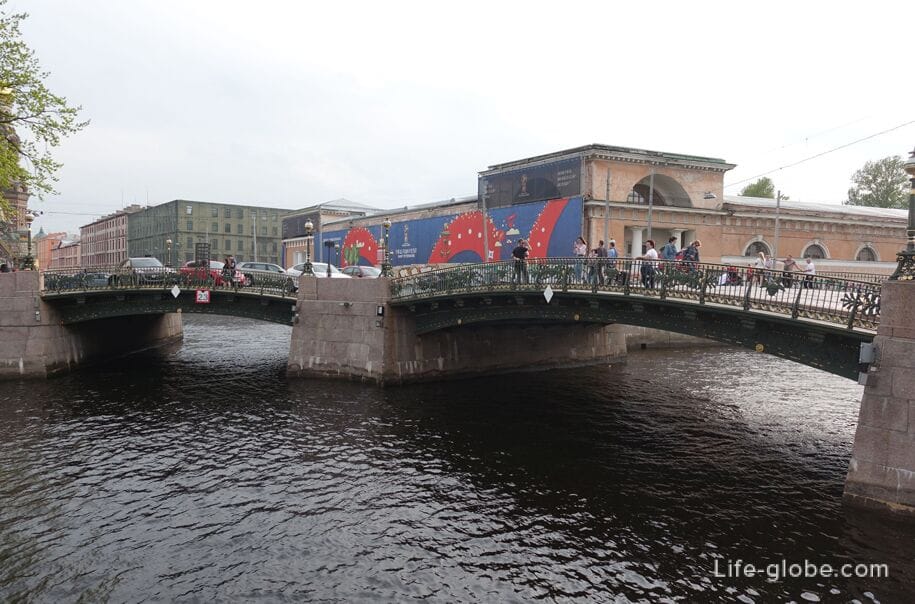 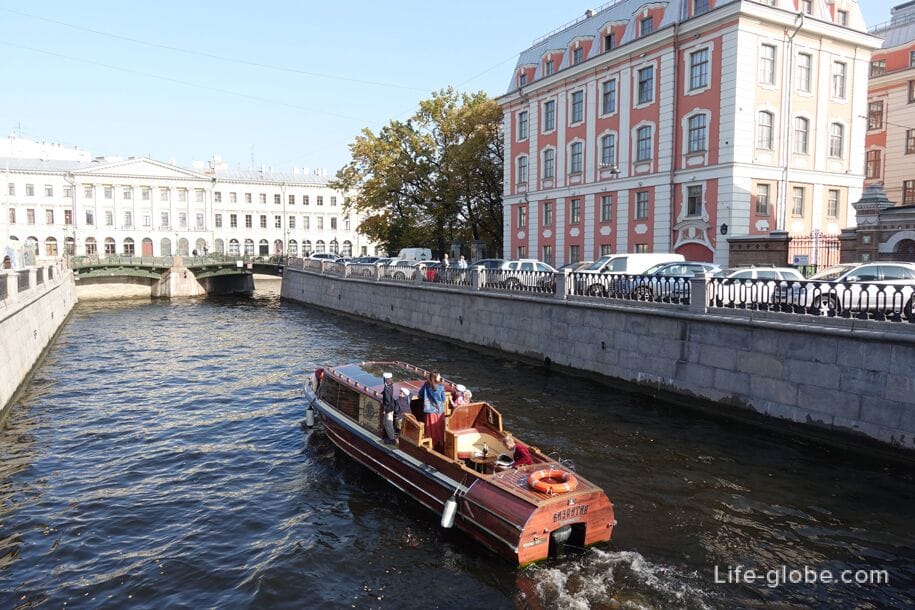 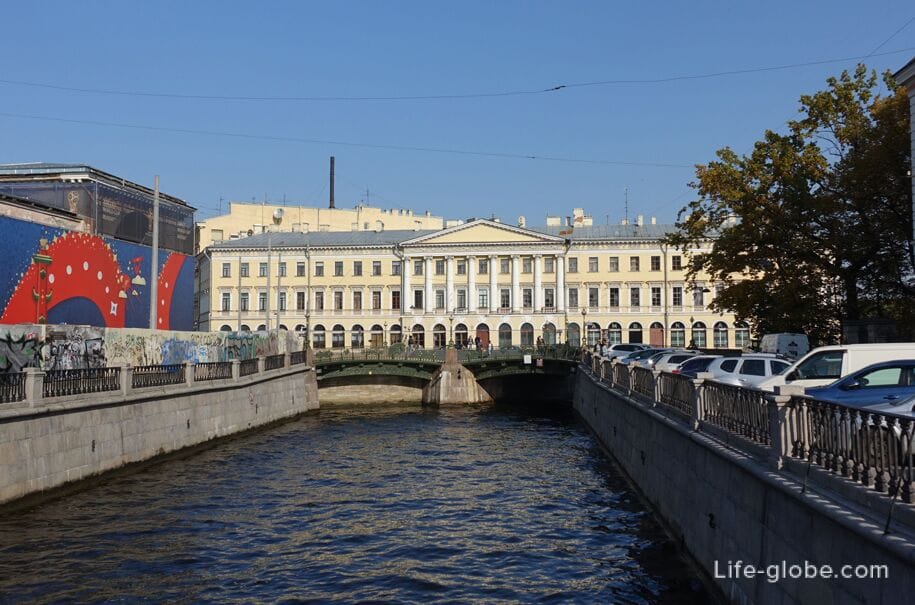 All three bridges of the Three-Bridge are arches; they were built according to the project of engineers V. von Tretter and E. A. Adam and opened in 1832.

The decorative design of the bridges is identical and is made in the style of late classicism. The decor is dominated by elements of a relief, cast-iron vegetable ornament.

Cast-iron railings of bridges of artistic casting, have decorations consisting of darts, against which the heads of jellyfish alternate.

Each of the bridges is decorated with" gilded " round lamps-floor lamps.

The colors of the bridges are green and golden. 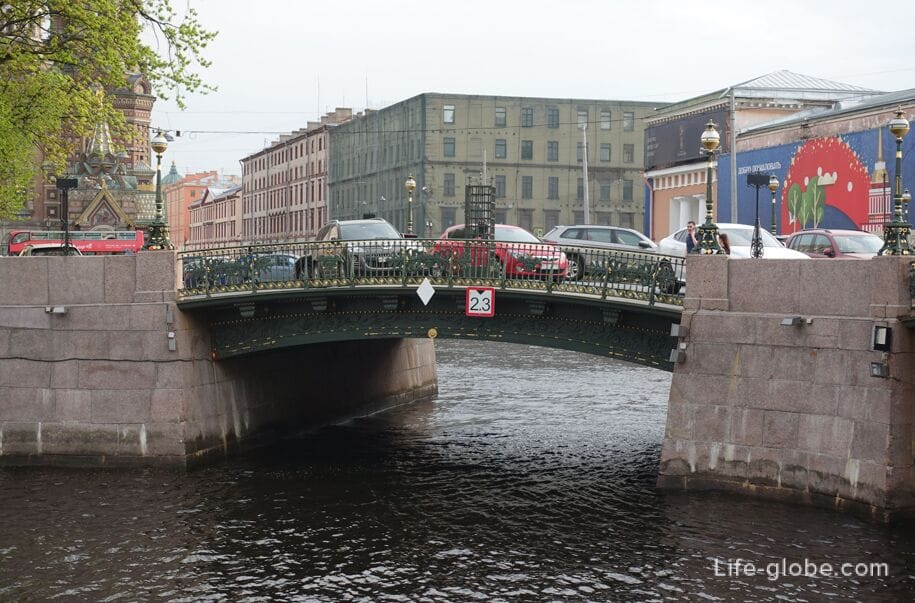 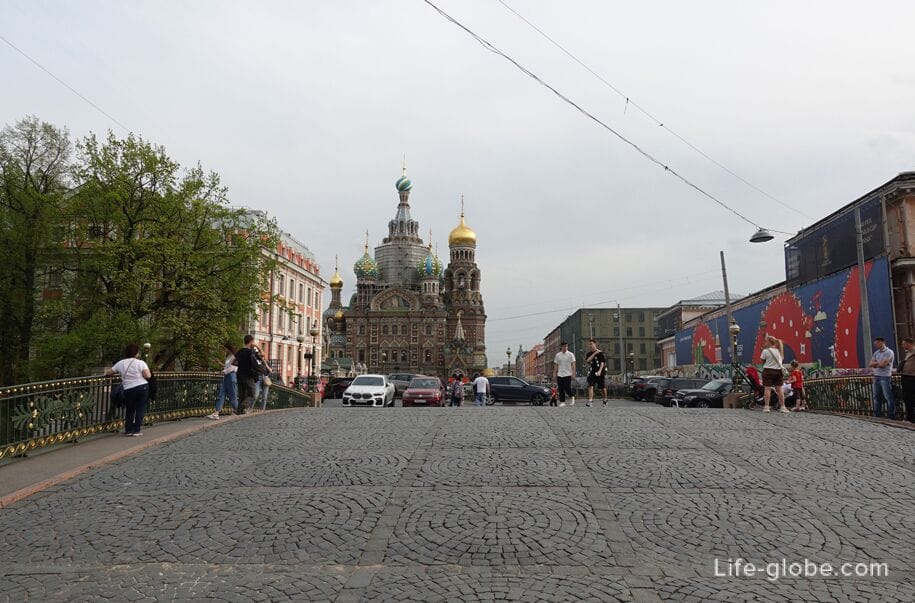 The Malo-Konyushenny bridge has a length of 42.8 meters and a width of 20 meters.

The bridge is single-span arched. The superstructure is cast-iron, assembled from 8 arches with 7 tubes in each. 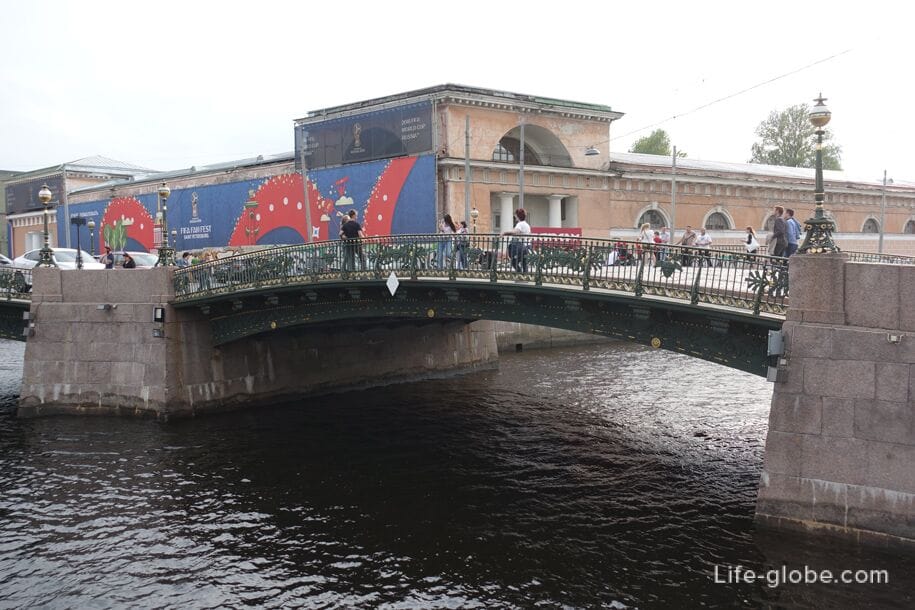 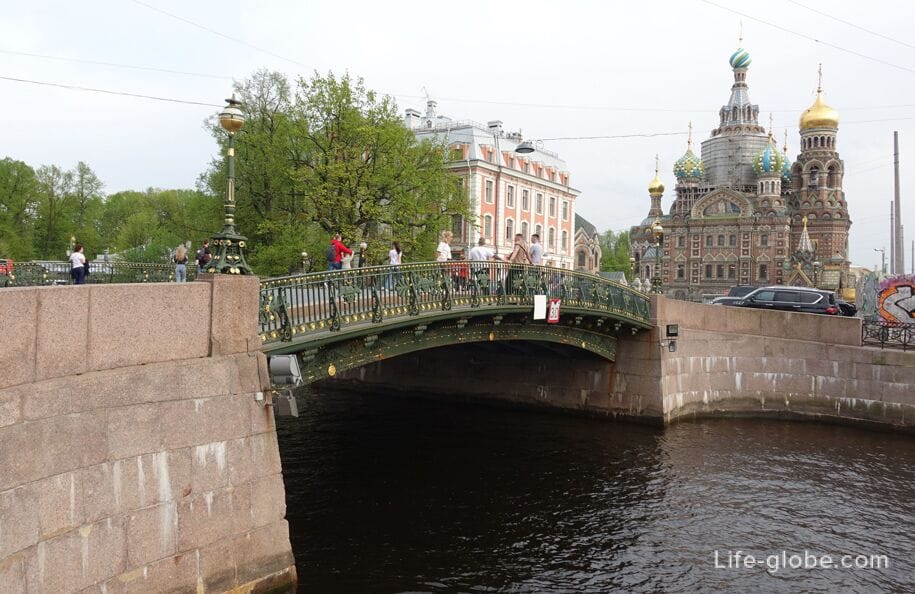 The Theater Bridge is 23 meters long and 15.5 meters wide.

The bridge is single-span arched. The superstructure is cast-iron, assembled from cast-iron tubing, bolted together. 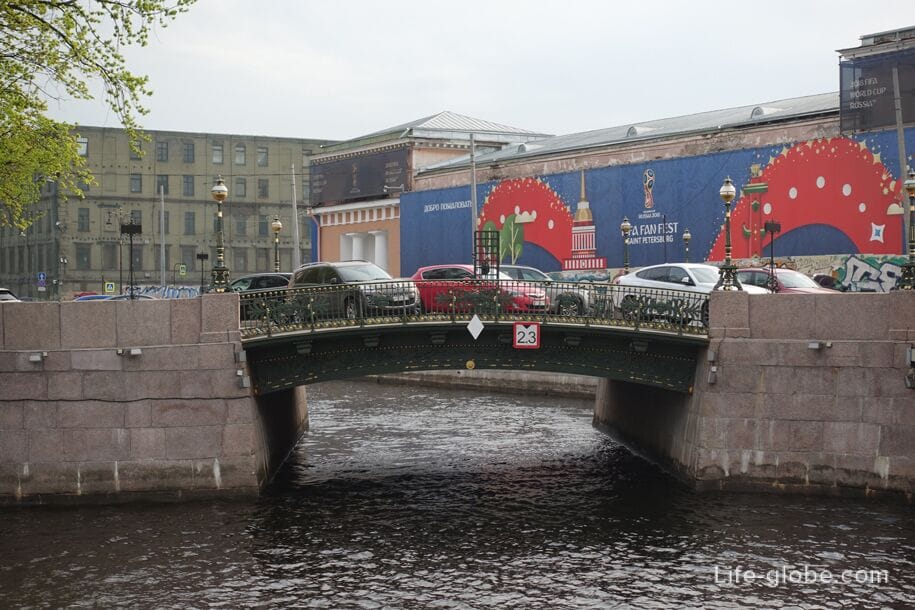 Next to the Trekhmostye, on the Embankment of the Moika River, there is a historic building-the Adamini house, which was erected in 1823-1827 for the merchant Antonov, according to the project of the Russian architect and engineer of Swiss origin Domenico Adamini.

After the merchant Antonov, the building is sometimes called the Antonov house, and the generally recognized name is the Adamini house, which the building received from the name of its architect. 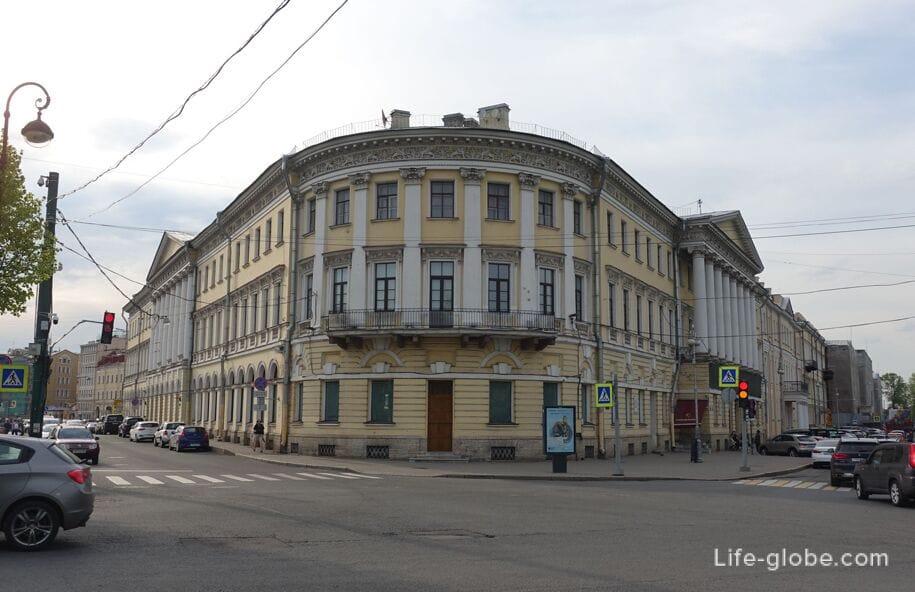 The history of the Three Bridges of St. Petersburg

The first wooden bridge, located just upstream of the Moika River from the current Three-Bridge, was built in the first quarter of the 18th century. Since 1738, it was called "Krasny", because in the alignment of the bridge there was a Red Channel, dug between the Moika and the Bolshaya Neva to drain the territory in the 1710s and filled in in the 1780s. Then the bridge was called "Tsaritsynsky", according to Tsaritsyn Meadow (now the Field of Mars) and "Theater", according to the "Free Russian Theater" located nearby. In 1828, the bridge was dismantled in connection with the construction plan of the "Three-Bridge".

After dismantling the bridge upstream of the Moika River, 2nd Garden Bridge, and just below - the Three-bridge.

The project of new cast-iron bridges of the Three Bridges was developed in 1807-1829. According to one of the projects, architect V.I. Geste and engineer E.A. Adam proposed to build separate crossings; while architects A.K. Moduy and V.I. Beretti, engineers A.A. Betancourt, P.P. Bazin, V.K. Tretter and M.G. Destrem put forward another idea - to combine the bridges into a single group (this project was adopted).

On June 8, 1829, under the leadership of engineer Wilhelm von Tretter and the Governor-General of St. Petersburg, P.V. Golenishchev-Kutuzov, the construction of bridges began. On January 8, 1832, three bridges were put into operation.

After the revolution of 1917, many decorative elements of the bridges were lost or partially damaged.

After that, a large-scale reconstruction of Three bridges was carried out, and in 1952-1953, according to the project of A.L. Rotach, floor lamps, lanterns and fence grilles were restored.

In 1999, according to the project of engineer B.N. Brudno, the reconstruction of the bridge ensemble was carried out. Then all three bridges became pedestrian, and the road surface was replaced with stone.

Subsequently, the bridges were also subjected to restoration and repair work.

In addition to the Three-Bridge, there is a legendary Seven-Bridge in St. Petersburg, which consists of an ensemble of bridges, is a unique panorama of the city, and, according to legend, fulfills the most cherished desires. Learn more about Semimostye, its bridges and how to make a wish… 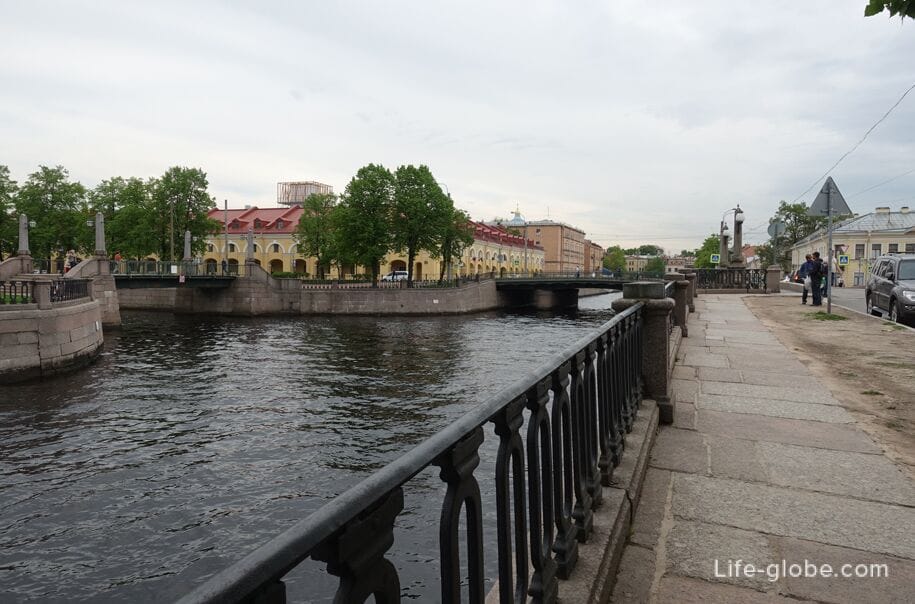 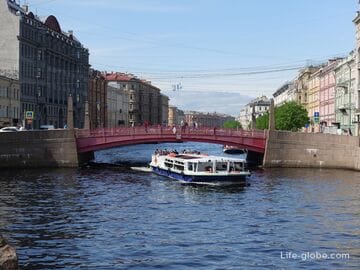 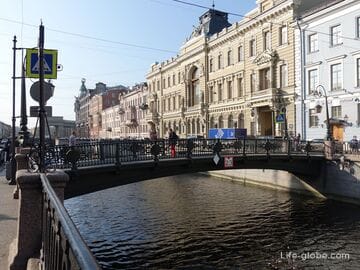