We recommend: Booking hotels on Djerba at the best prices

In this article, we will talk about the main and most interesting sights of the sunny Tunisian island of Djerba, which will help you get to know the island more deeply, will discover a lot of new things and will make your stay rich, interesting and informative. And after, we will dwell in more detail on the excursions that you can visit on the island of Djerba, their description, cost and duration in time.

The most interesting sights of the island Djerba

First, I would like to highlight to visit on the island of Djerba, it is a Museum-entertainment complex -

This Park is probably the most interesting and besides informative site on Grebe. A visit to the Park will be an interesting addition to the rest, both children and adults of all ages.

The Park has three main zones, there are:

- crocodile farmwhere you can see the feeding of crocodiles; 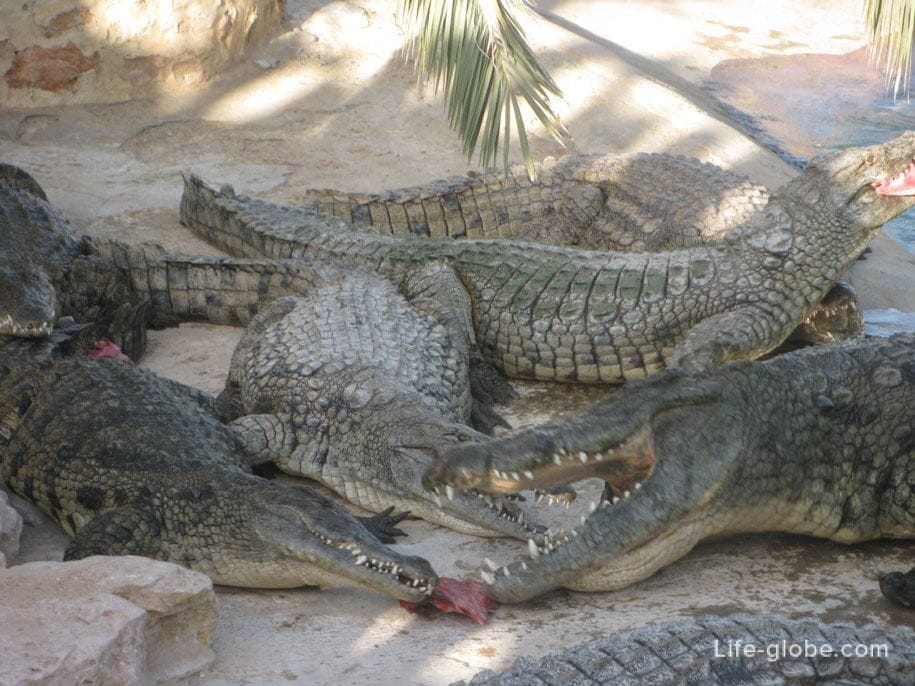 - stylized traditional Tunisian village "Heritage"consisting of buildings with traditional architecture garbinski and residential complex, and describing how previously lived on the island; 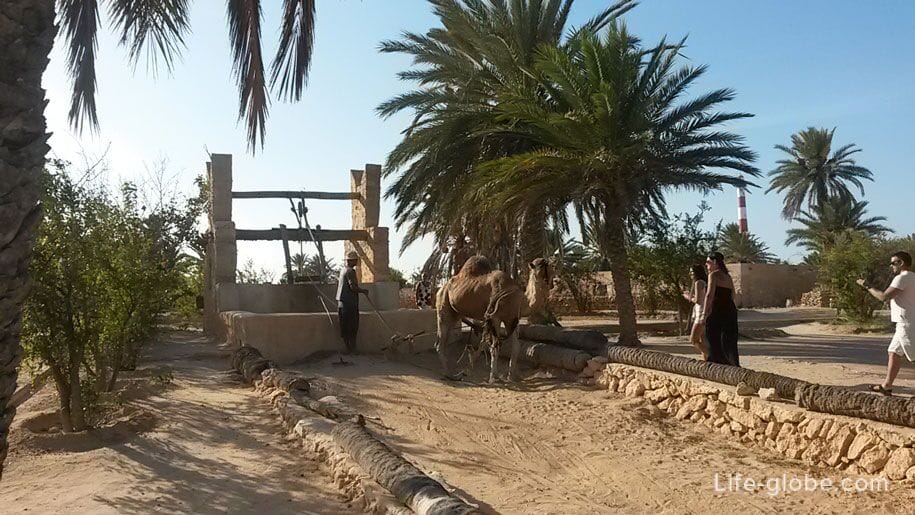 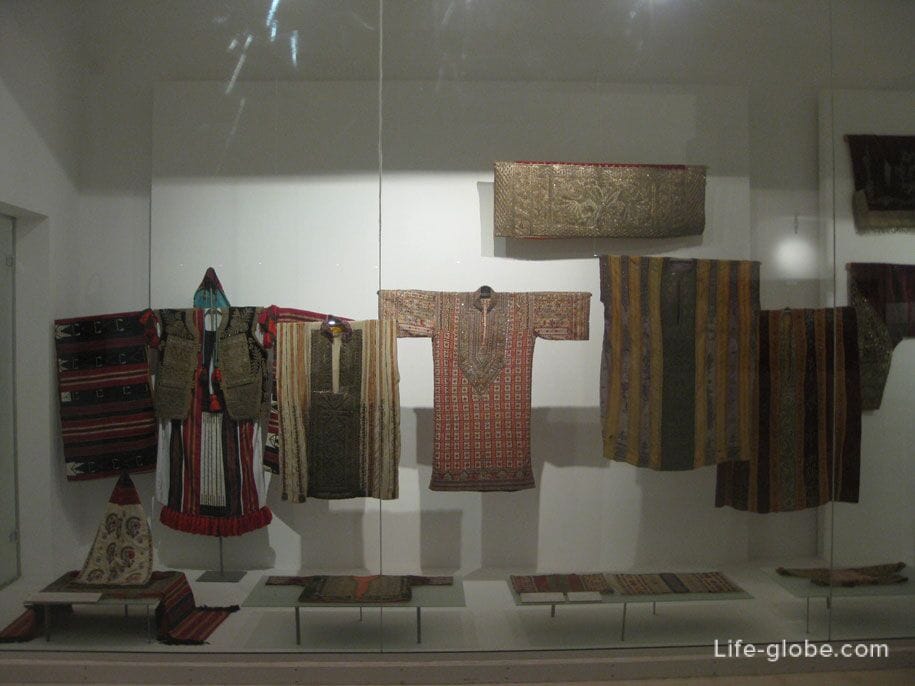 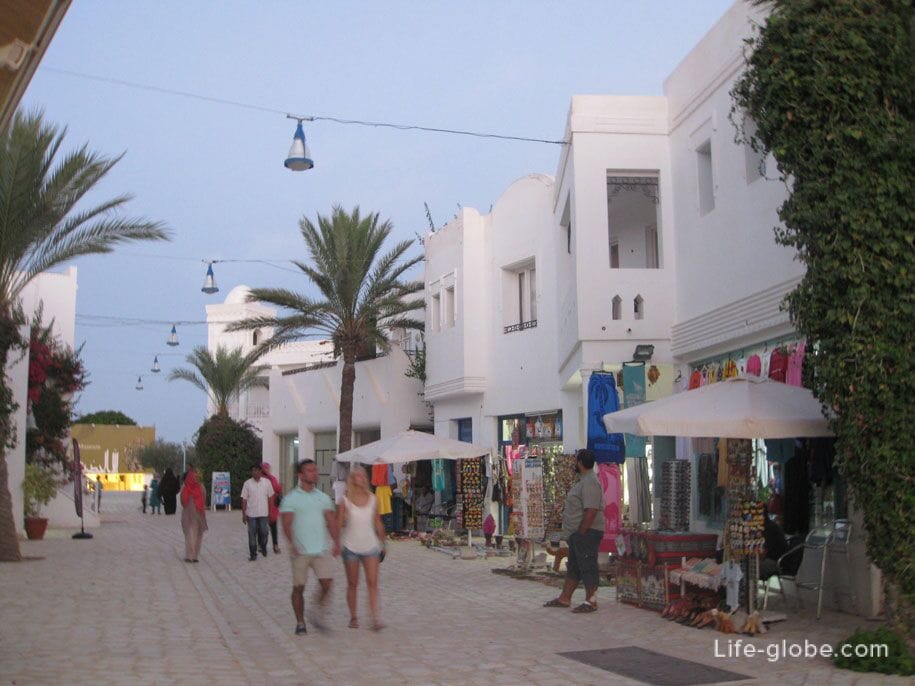 The entrance fee: the entrance of the Park to the gift shops and cafes is free, the crocodile farm, Museum "Lella Hadria" and complex "Legacy" entrance ticket costs 15 Dinar (TND), children from 2 to 12 years - 8 TND.

The synagogue of El Ghriba in er Riadha 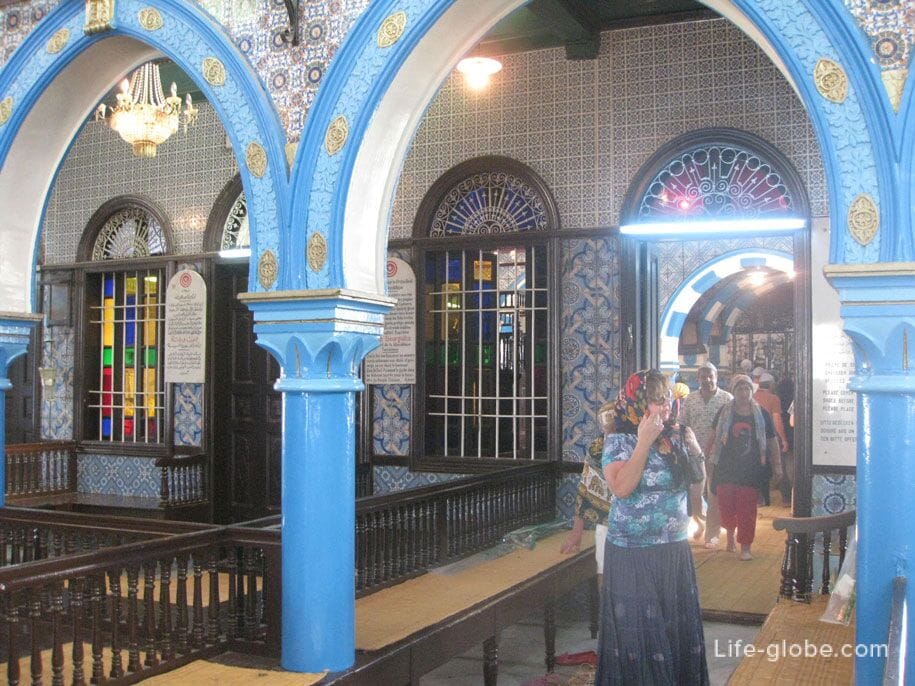 In the synagogue is the so-called "wailing wall", following the example of Jerusalem, just at a reduced size. In this wall you can leave notes with requests, prayers and wishes. Say, all requests will be heard and dreams come true)) 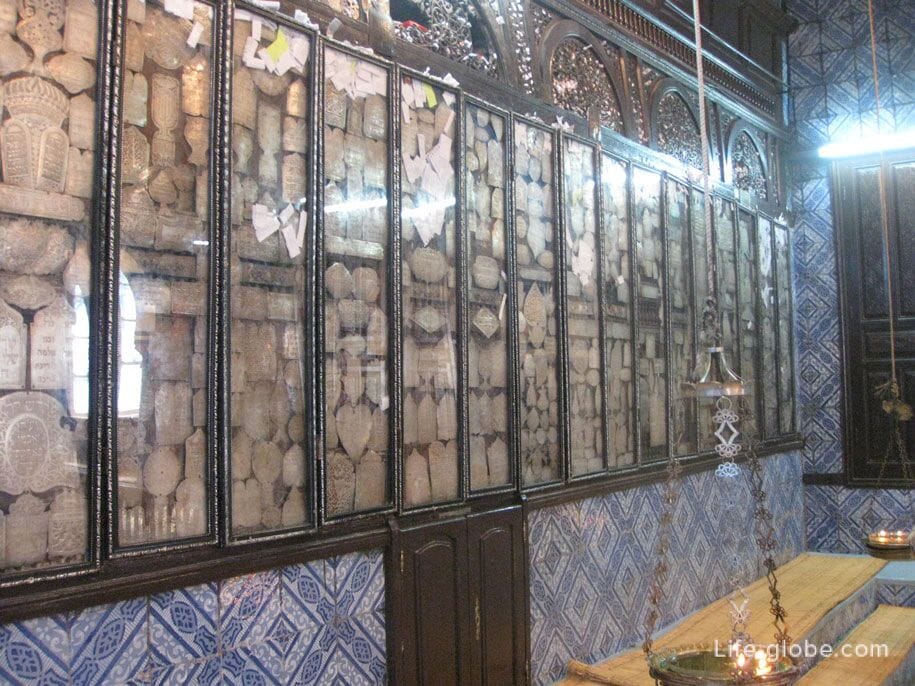 Since the synagogue is the destination in North Africa annual pilgrimage for many Jews on its territory is possible to visit a hostel for pilgrims and see how they live when they come to the synagogue. 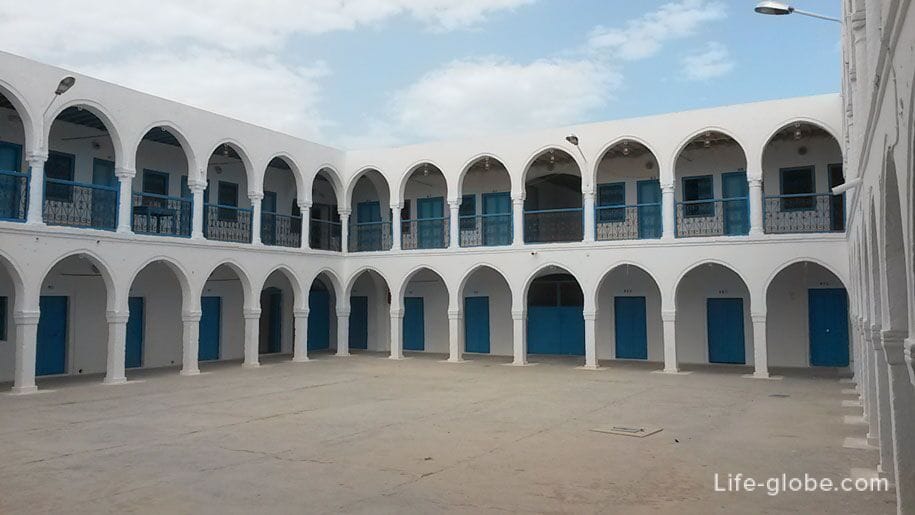 The synagogue is located near the village of Riyadh, where long lived the Jews. So that when you visit the synagogue you will have the opportunity to take a walk on this famous village. 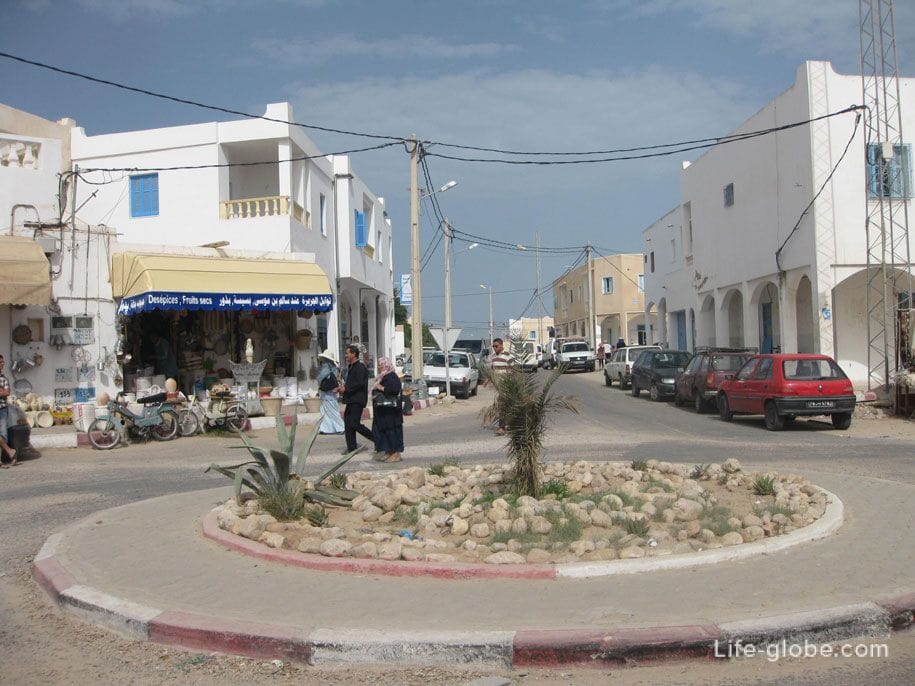 Guellala, the village of potters on the island of Djerba

The village is famous for its pottery, ceramic kitchenware and other articles of clay. Here you will find the old pottery, not only of the island JRuby, but throughout Tunisia.

In the village of Guellala sights such as: 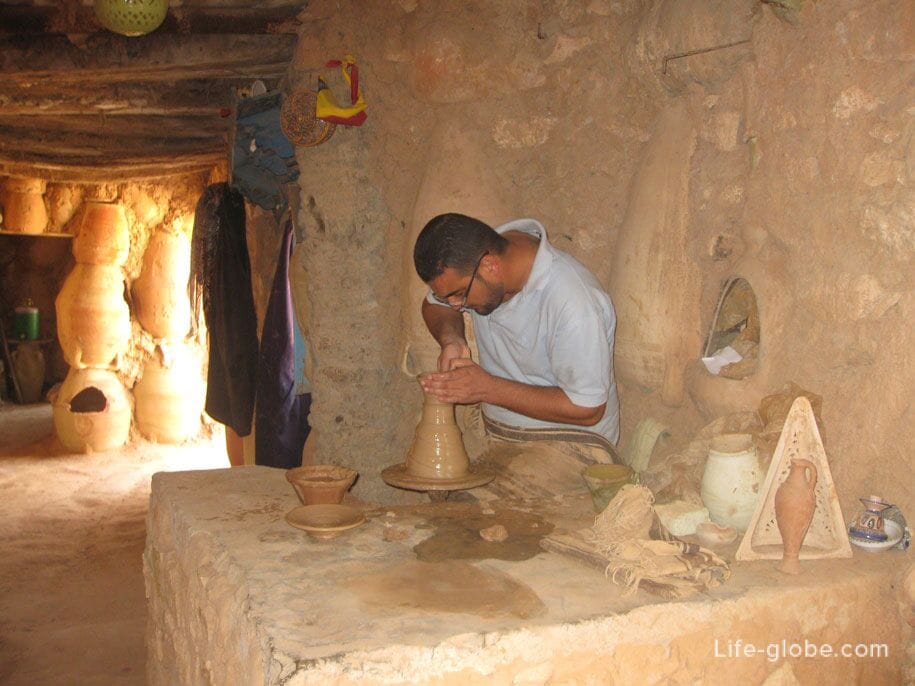 and even Popo camels 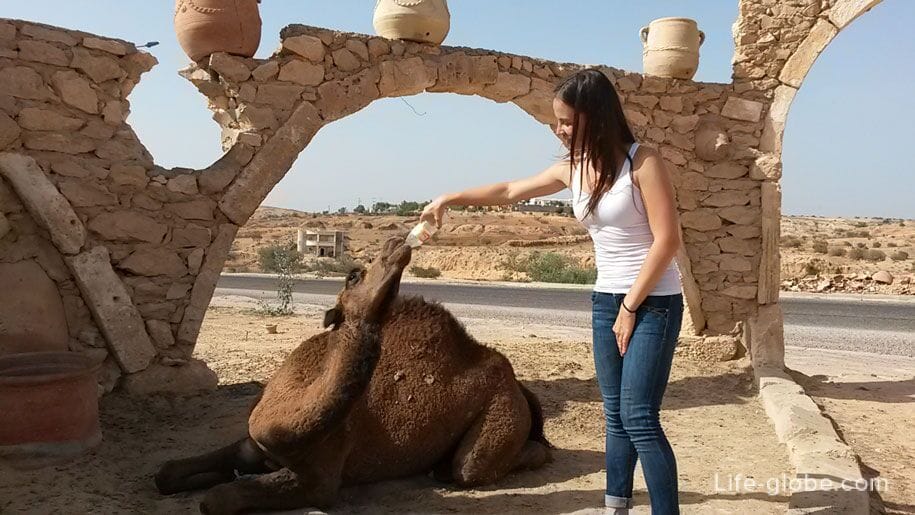 and then buy the memory ceramic Souvenirs or utensils 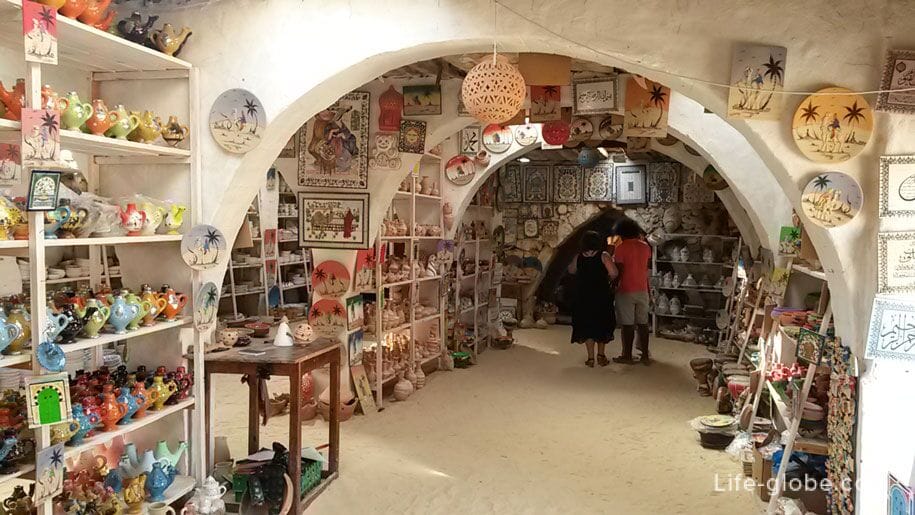 one of the best of the island's museums - the ethnographic Museum of Guellala/Mussee de Guellala, visit which you can clearly learn about the life and traditions of the local people.

Visiting this Museum was one of the most interesting, memorable and educational events on the island of Djerba. In the Museum everything is alive and colorful, without a doubt, it will be interesting for both children and adults of all ages.

The Museum illustrates the unique, vintage and a little strange lives of the inhabitants of Djerba. All of this is presented in several halls of the Museum, which displays scenes from the life of gerbiceva. 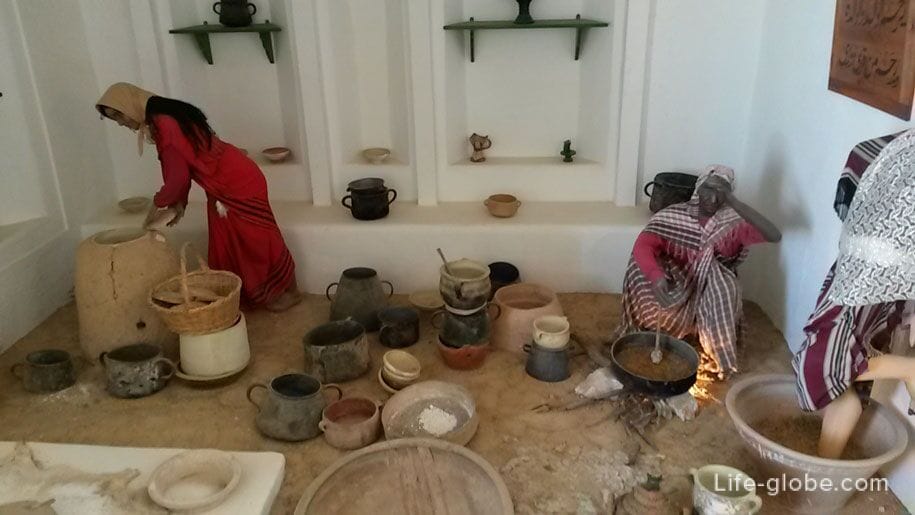 The entrance to the Museum is paid. The price of admission 7 TND, photos or videos - 2 TND.

and, of course, to personally visit the center Gellary with numerous souvenir shops and a small colourful shops, where to see and buy Souvenirs and other products pottery. 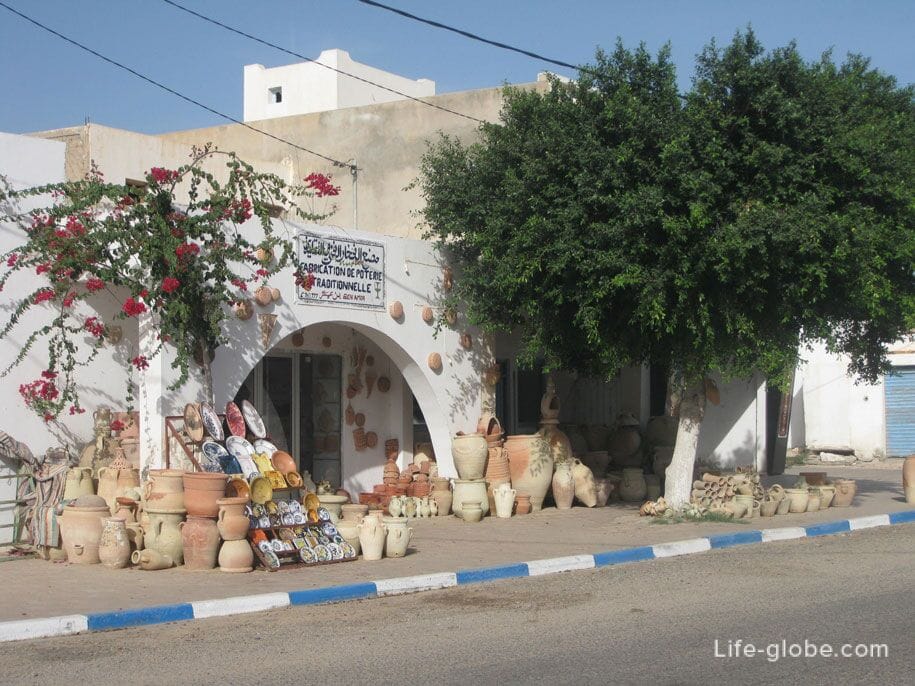 Houmt Souk/Djerba is the largest city on the island Djeraba and its capital.

In the city there are attractions of the island, as:

- the largest and most colourful Bazaar/market on the island. Besides, prices on this market are somewhat lower than in other markets of the island. 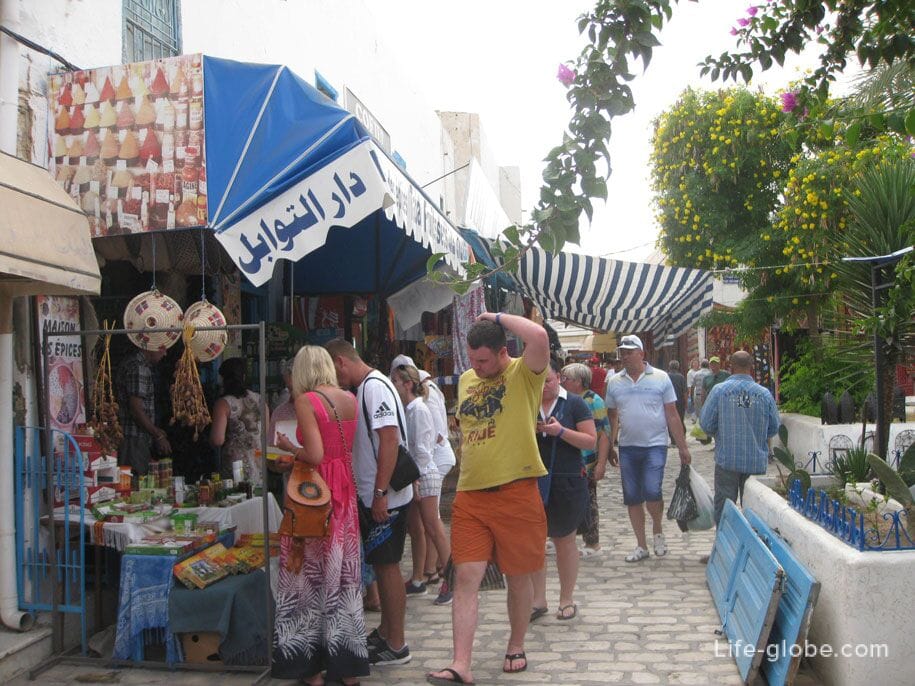 - Fort Borj El-Kebir or Ghazi Mustafa. This fortress is the most prominent and monumental attraction of the island of Djerba. Its history dates back to the 9th century. Also the fortress referred to as Spanish. 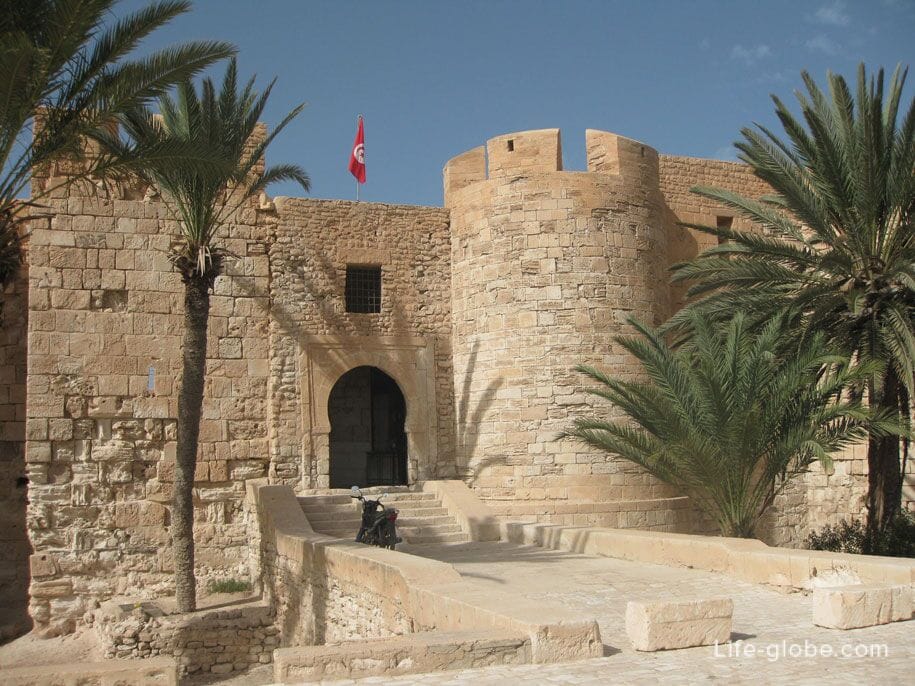 - "the main" sea port of Islands/Port de Houmt-Souk. In addition, Houmt Souk is a port city. Here flocked for centuries, fishermen, merchants and artisans of all stripes. 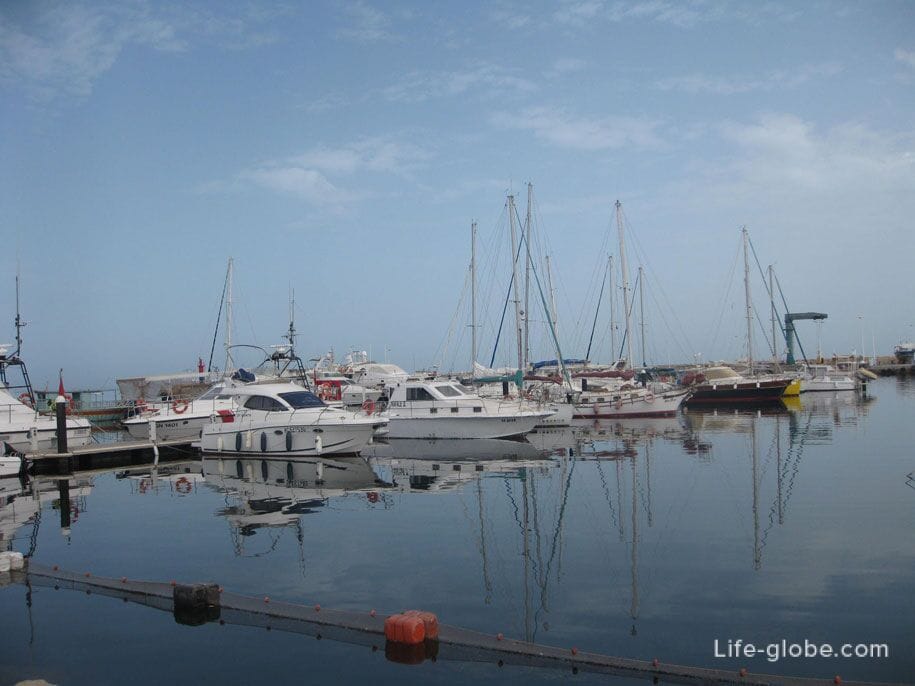 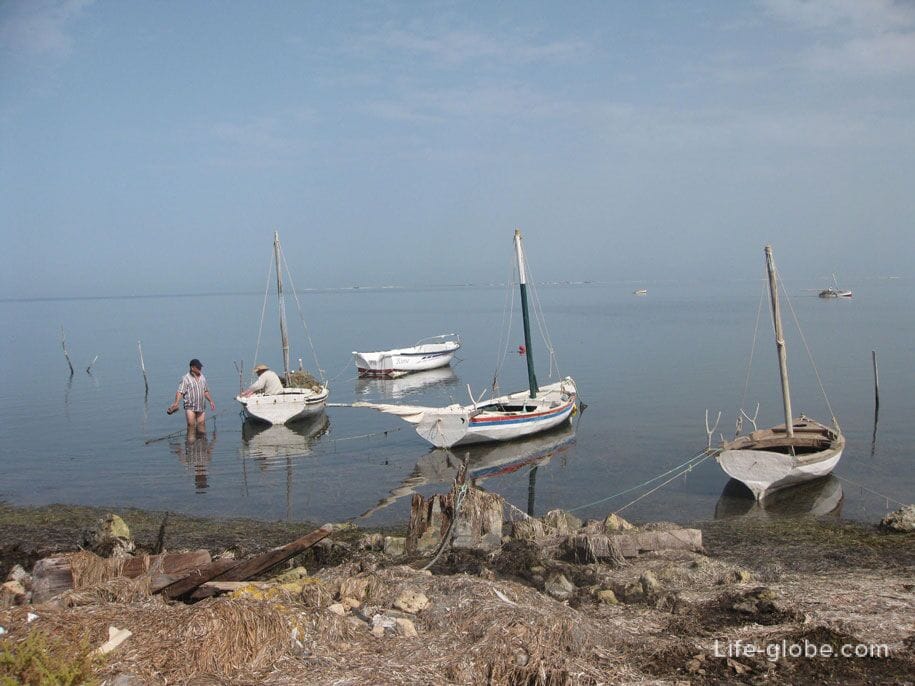 - and just to walk around the city, breathing life to local residents and seeing the amphitheater and the mosque. 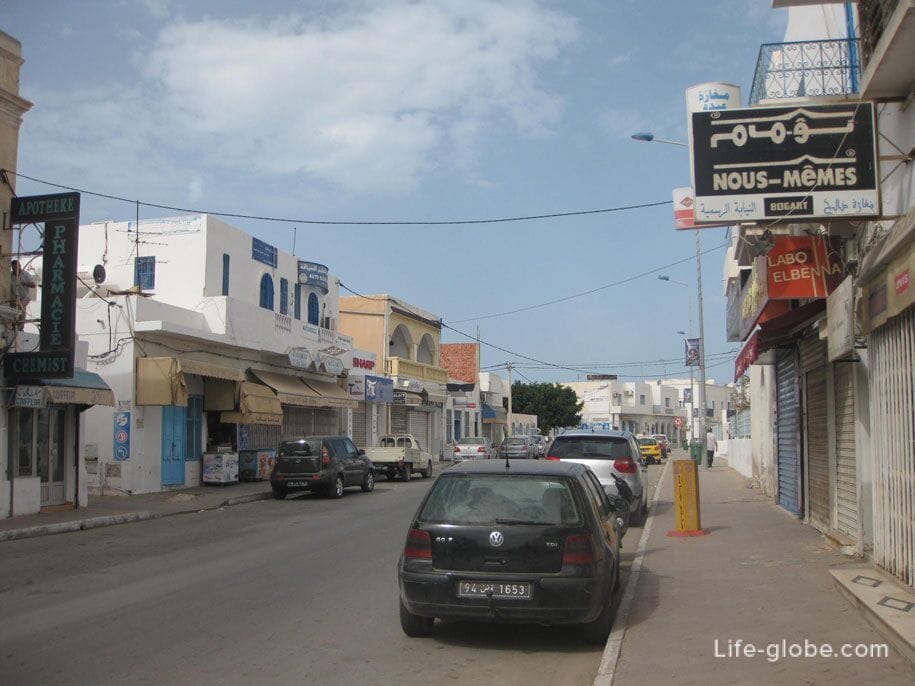 It is, of course, difficult to attribute to attractions, but this is the only airport on the island and one of the largest airports in the South-Eastern part of Tunisia, although it has only one runway.

In addition, the on the web airport is quite attractive, done in the typical Arabic style. 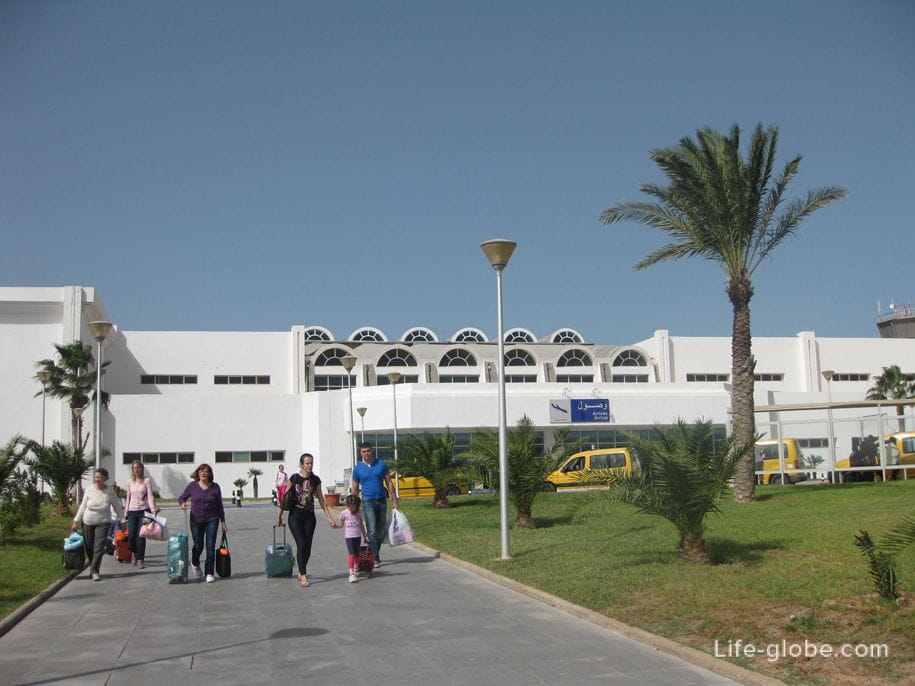 Midoun, the town is small, but its streets are always full of tourists. And attracts it to itself, first of all the location, because the city is in close proximity to that part of the island, where the abundance of hotels and the best beaches of Djerba.

The tourists usually visit the Bazaar/market and shopping Mall, which houses a supermarket of the French network Carrefour/Carrefour. 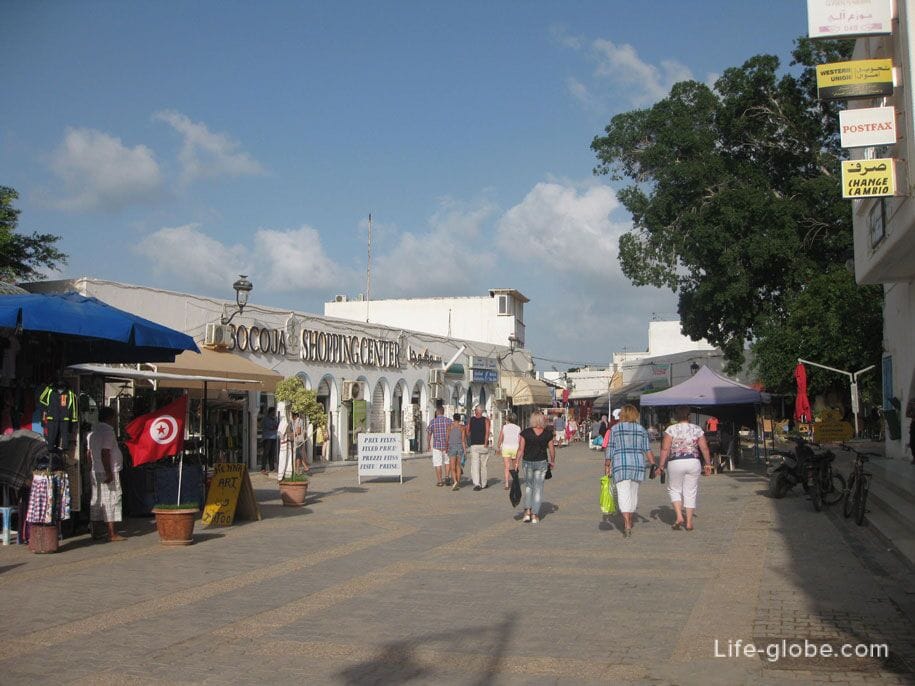 Boast a variety of attractions the city can not, it is not Houmt Souk or village potters. However, there are mosques! To look at which will be very interesting. 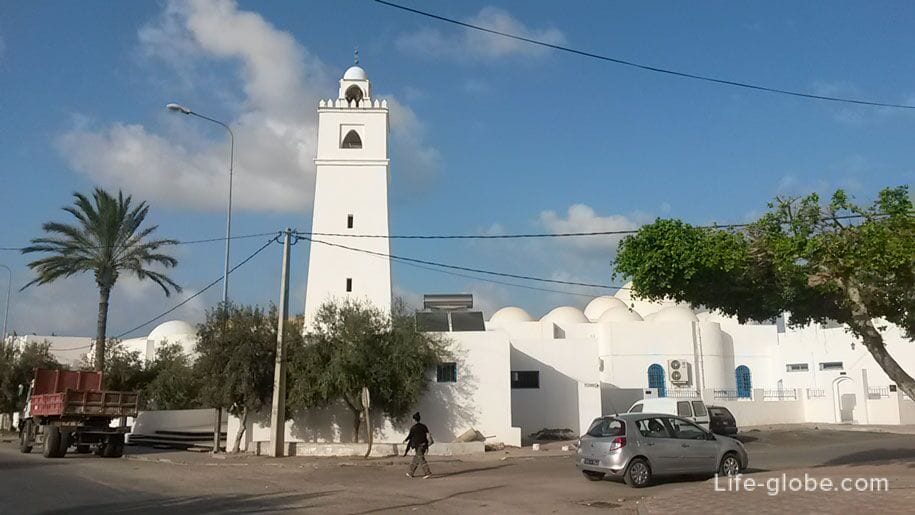 The most famous mosque in Midoun is the mosque Fallon.

Also, the city attracts tourists because walking through its streets can be fully immersed in a typical gerbilsky life and touch unusual Oriental flavor of the country. And then sit down in one of the many cafes, enjoy a Cup of famous Tunisian coffee and Shisha. 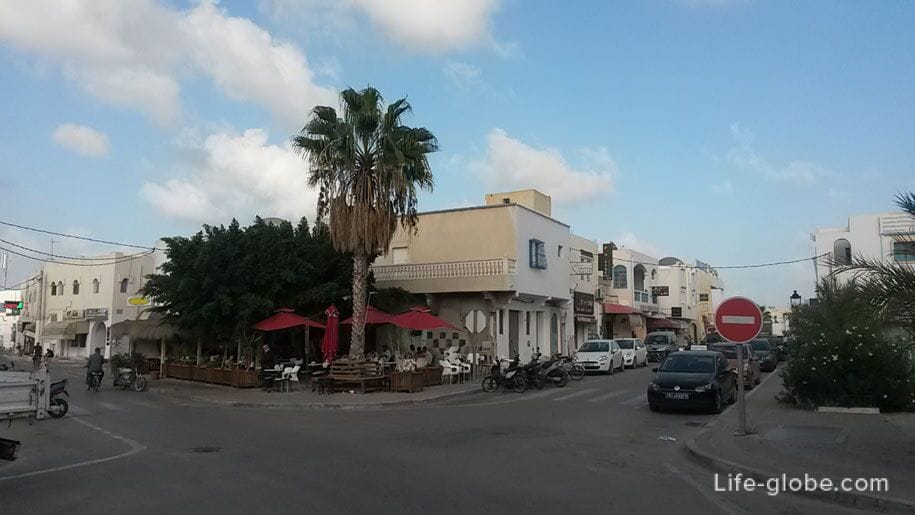 The town of Ajim is the main fishing port of Djerba. Here arrive the ferry from the mainland. Here you can stroll along the promenade and see firsthand how they catch sea sponges and octopus, using large clay jugs, as a trap.

Besides Adzhim and its environs were filmed in the popular movie "Star wars." And buildings that can be seen in the film, opened the entrance for tourists.

Bulk Roman road, for over 2000 years, connecting the island with the mainland. Currently, this road safely used for through traffic, and is the only land the opportunity to get to the island from the mainland, well, or Vice versa, from island to mainland)).

Of course, now this dubious landmark, because it is just a paved road. However, has an interesting history and tourists bring hard during guided tours. So what? Need something to lure tourists to the tour and carry any, for the Djerba island may not boast an abundance of attractions.

To visit all the above attractions of the island can be both independently and with tours. Independent attractions of Djerba will be more interesting. The best way to reach is by taxi. Besides, taxi is fast, cheap and secure.

So, slowly, we come to the second part of our story

1. Tour of the island of Djerba. The tour includes a visit to the market town of Houmt Souk, the ethnographic Museum in the village of Gellala, the synagogue El Ghriba , and the bulk of the Roman road.

2. Amazing Djerba. In this tour are invited to visit the Park Djerba Explore and Djerbahood - an open air Museum, where 150 artists from around the world painted the walls of old houses colorful and unusual paintings.

3. Disco Cyclone. With this tour you can visit the largest and fashionable, if you can call it that, club Djerba.

4. Dinner at the casino. You can try your luck in the only casino on the island to dine in the atmosphere of a traditional Arabic restaurant, tasting of Tunisian wine and listen to live Irish music.

6. Riding ATVs. It was said to be one of the most interesting pastimes on the island. All who went were satisfied, and some even rode several times.

7. A trip on the pirate boat. The tour includes transportation to the port of Houmt Souk, where you are the sender of a pirate boat on the "tip" of sandy shore. During the voyage you will be entertained by actors dressed in pirate costumes. On arrival to the scythe will drop you where you will have the opportunity to swim in the sea and sunbathe on the clean beaches. Also on the ship, you will enjoy lunch.

The tour, they say, sucks. The performance of the pirates is astonishing acting mediocrity, except perhaps for children. The beaches are in smelly seaweed, and deck chairs for extra $5 fee. But the food is good. Previously, this trip was presented as a trip to the island with Flamingos. Naturally, this is not an island, and flamingos have long been gone there.

Also on Djerba you can have fun riding horses and camels on the beach, diving or parachuting, and other water attractions. All these activities, as well as Quad Biking, are cheaper to buy from local people.

Excursions outside the island of Djerba:

1. Carthage. Included: a visit to amphitheatre of El JEM, the ancient mosque in the city of Kairouan, the Bardo Museum, the capital of Tunisia - the eponymous city of Tunisia, Sidi Bou said and ancient Carthage.

2. Sugar 2 days. A two-day tour with a visit to the Sahara desert and overnight in Berber.

Our Council! Do not buy tours at first impressed. You'd better wait a day or two, take a look, find out where that is, walk the beach, talk with other vacationers. Any visit other than, perhaps, a trip to the Sahara, you can easily organize yourself. And all entertainment, to buy on the spot, beach and sea on the coast e.g. Quad Biking at the local hotel. So you will save your money, not overpaying to travel agencies. 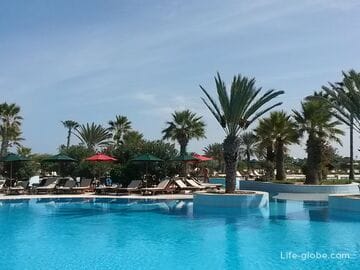 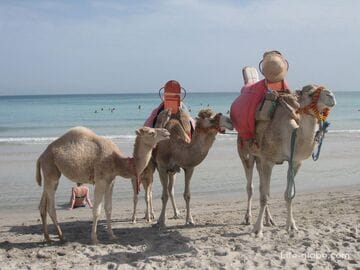