Pochtamtsky Bridge is a pedestrian bridge in the center of St. Petersburg.

The Pochtamtsky Bridge spans the Moika River in the alignment of Bolshaya Morskaya Street and Laundry Lane, and connects the Kazan and 2nd Admiralty Islands.

This bridge has survived to the present day in its historical design and is unique in its kind, since it is the only pedestrian chain suspension bridge in the city. In 1822-1827, seven chain suspension bridges were built in St. Petersburg, of which only three have survived to this day: Bank and Lion across the Griboyedov Canal, as well as the Post Office Bridge over the Moika. At the same time, the Bank and Lion Bridges are actually girder bridges, where the chains perform only a decorative function, while the Post Office Bridge has preserved (was restored) the original "hanging" structure created in the first quarter of the 19th century. 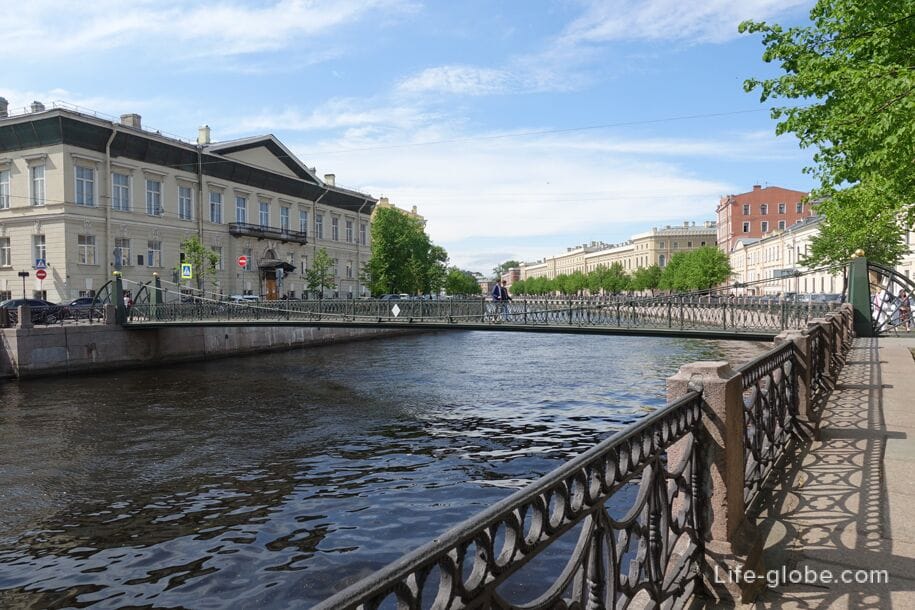 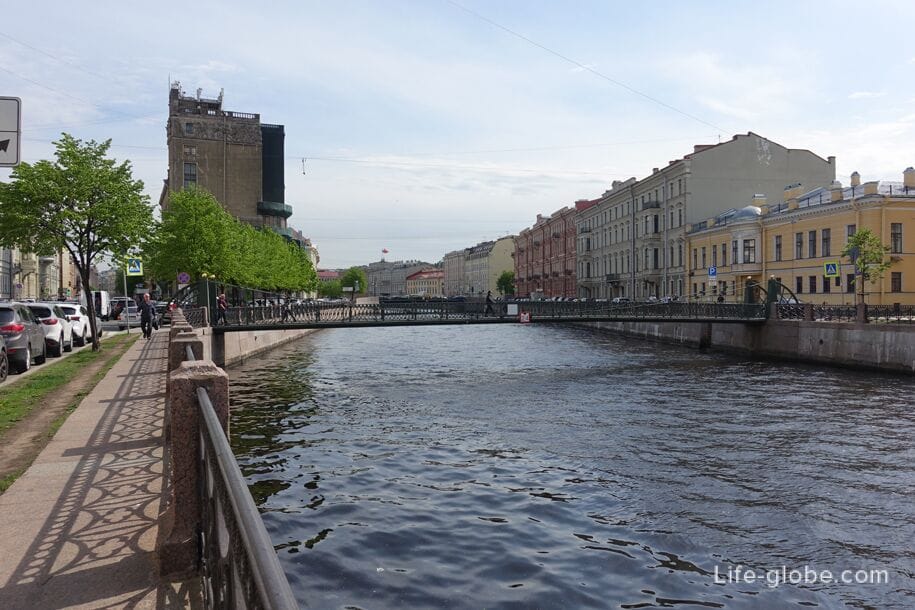 The Post Office Bridge is 39 meters long and 2.5 meters wide.

The bridge is a single-span metal chain hanging structure. The bridge bed is supported by four paired chains consisting of 19 links. Chains on the banks are attached to four cast-iron quadrants with obelisks 2.45 meters high, topped with gilded metal balls.

The bridge supports, made of rubble masonry with granite cladding, represent a single whole with the walls of the river embankments.

The railings of the bridge are a wrought iron artistic lattice. The bridge fences are not attached to the shore elements, which provides the structural elements with freedom of movement and makes them more durable. 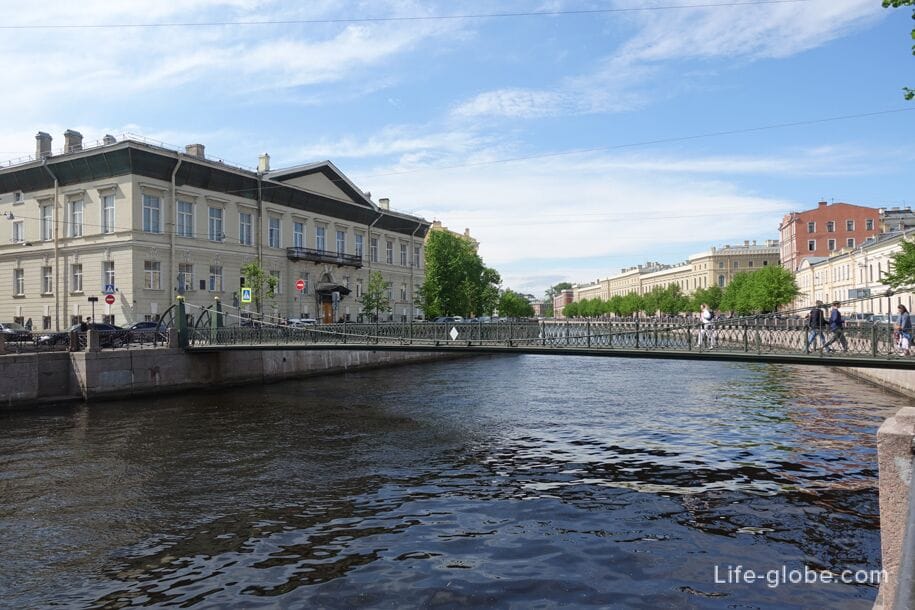 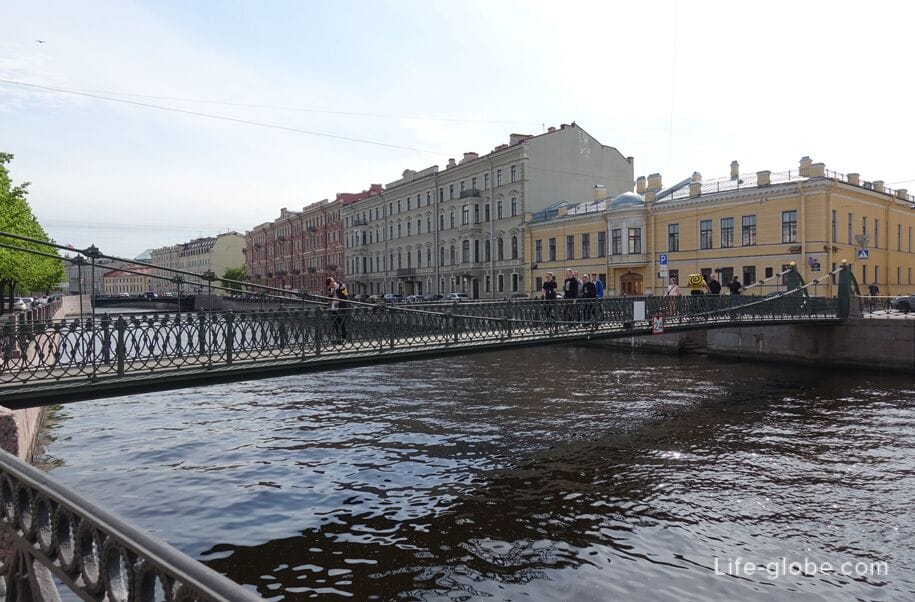 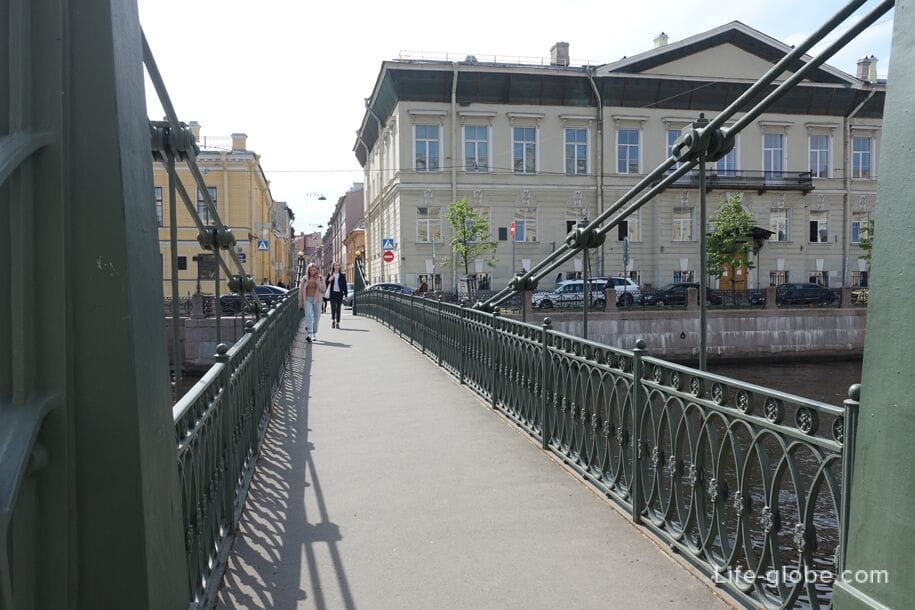 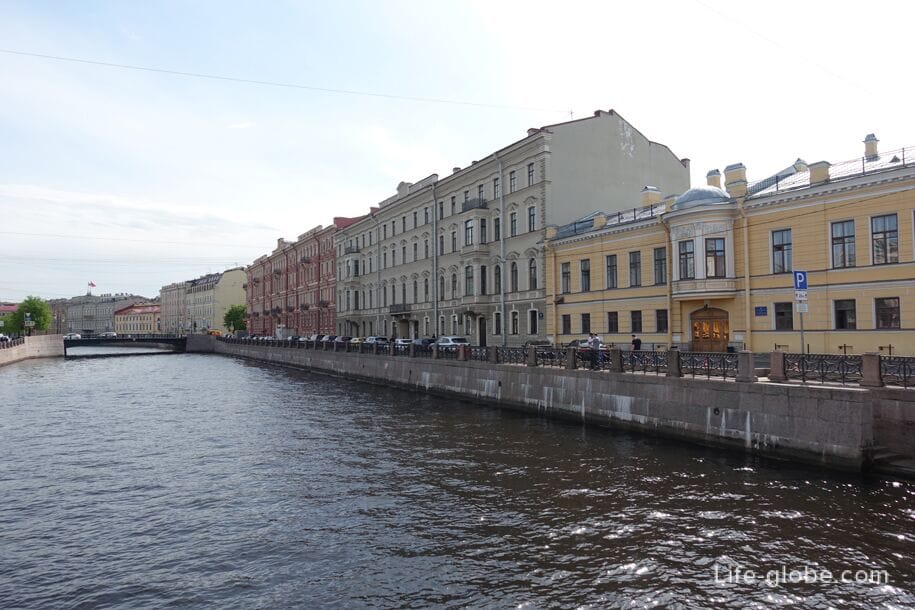 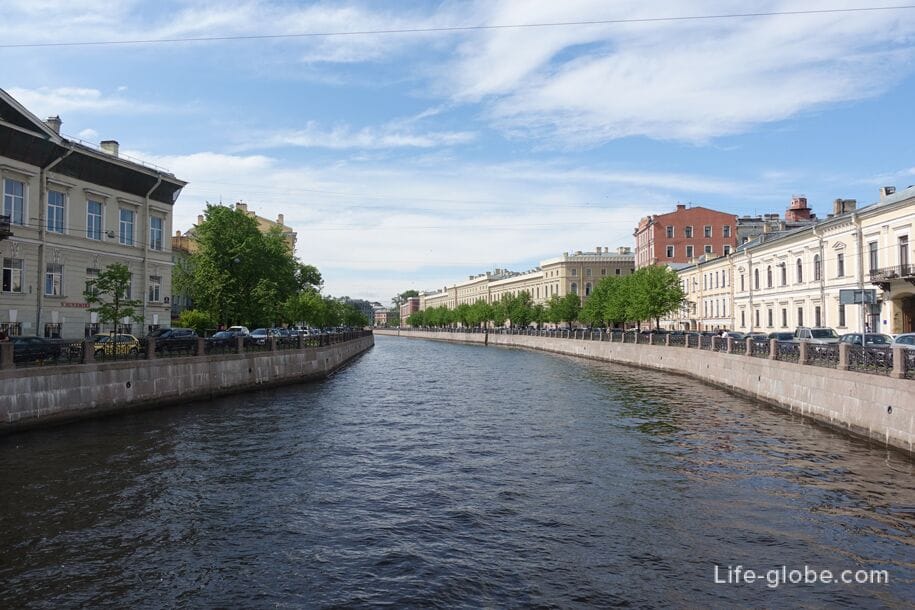 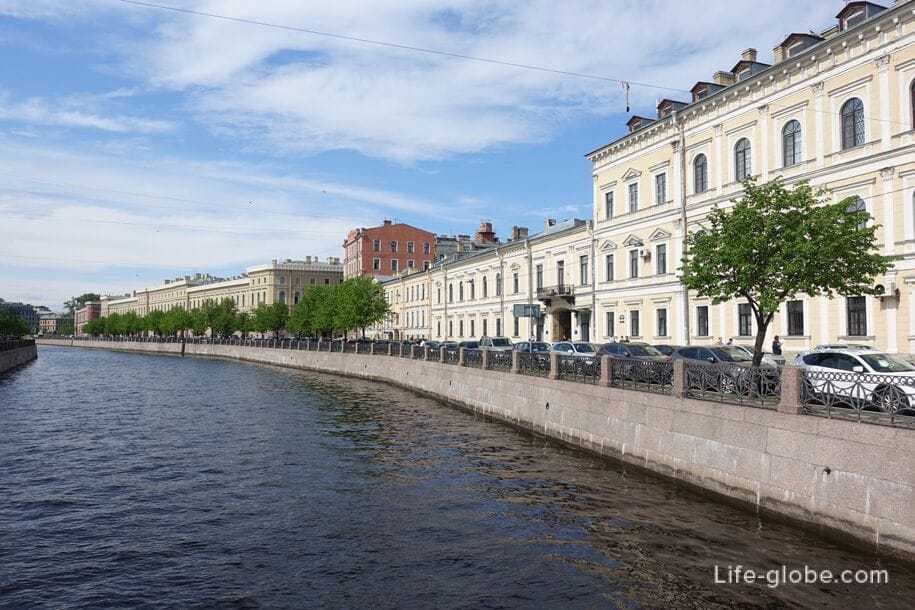 Near the Post Office Bridge, on the even side of the Moika River embankment, two buildings are notable:

- number 86-88 is the Montferrand mansion, decorated in the Italian Renaissance style and distinguished by a powerful bay window above the main entrance.

The building was built in 1743-1744 according to an exemplary design, and then rebuilt. During the history, the building housed: the Italian Embassy, the design institute "Giproruda", the prosecutor's office; 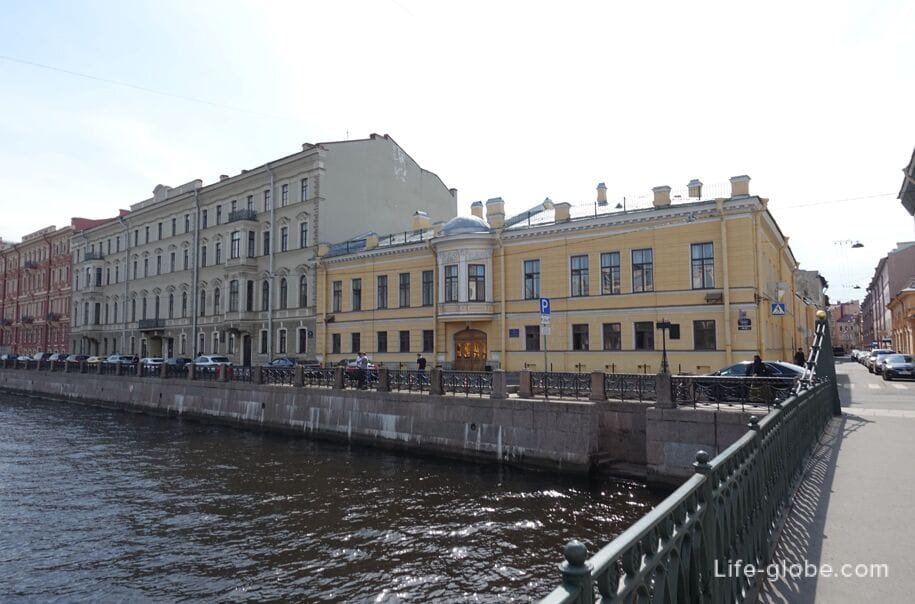 - number 90 is the house of A.M. Golitsin, which has the style of classicism.

The building was built from the end of the 18th century until 1816, and was expanded in the 20th century. 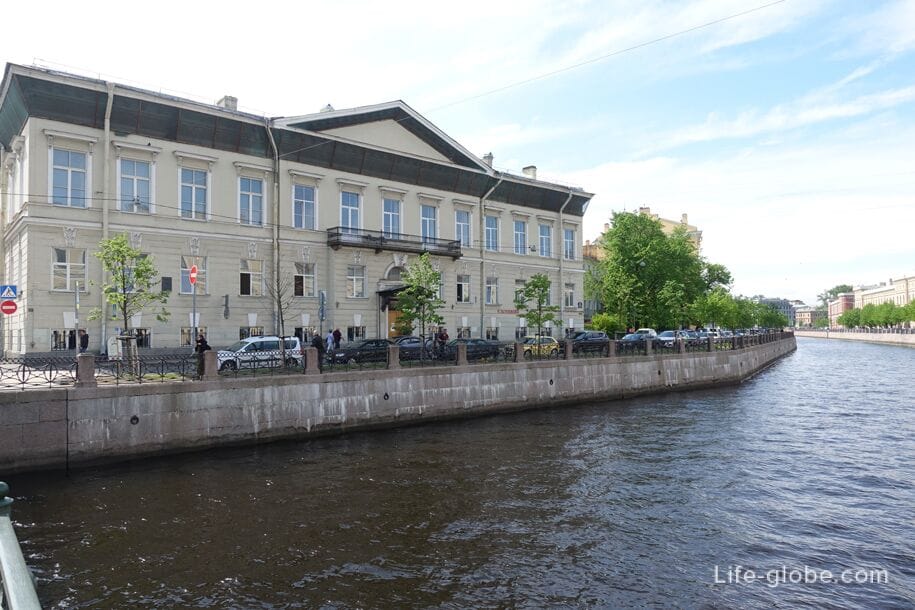 The first bridge in this place was built at the end of the 18th century. The bridge was a 4-span wooden beam system with wooden abutments and intermediate supports sheathed with boards.

By the beginning of the 19th century, the wooden bridge was dilapidated. In 1823-1824, according to the project and under the supervision of the engineer of the Railway Corps V. Von Tretter, the bridge was rebuilt into a pedestrian single-span hanging.

To lighten the weight of the bridge in 1902, iron wrought-iron grilles were removed from it and lighter, simple patterns were installed.

Due to the progressive deformations of the superstructure, wooden supports were placed under the superstructure in 1905, and the bridge ceased to be suspended. The hanging single-span bridge was turned into a three-span beam-split system.

In 1953, the wooden superstructure was replaced with metal I-beams. Only the sagging chains have been preserved as an ornament, reminding of its former role.

In 1956, at the initiative of the chief engineer of Lenmosttrest P.P. Stepnov, the original cast-iron grating was restored again according to the project of architect A.L. Rotach.

In 1968, the gilding of the balls on the obelisks was restored.

In 1981-1983, according to the project of engineers of the Leningrad Engineering Project B.B. Dvorkin and R.R. Shipov, the suspension bridge was restored in its former form. 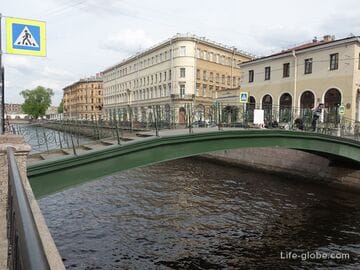 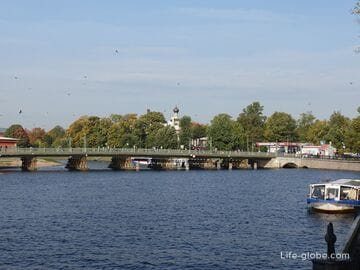 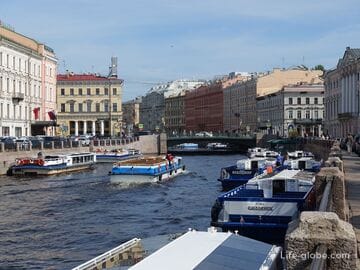