Plaza de españa (Plaça Espanya) and the street Dintre or property is de-Centre (Passeig de Dintre) - the second most popular in the centre of Blanes, after a promenade, a place for walking and recreation.

Square and street on the blocks above the promenade, which runs along the Central beach de Blanes.

The Plaza de españa and the prospect Centre is a zone extending about 200 metres along the buildings, some of which are historical and architectural monuments as well as places to stay, shops, apartments, coffee shops, cafes and restaurants with tables under the open sky. 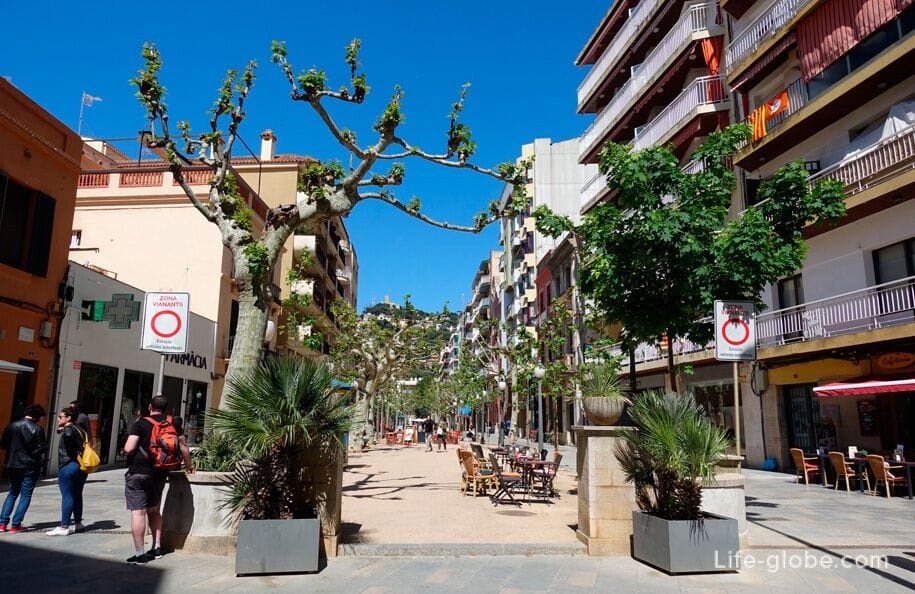 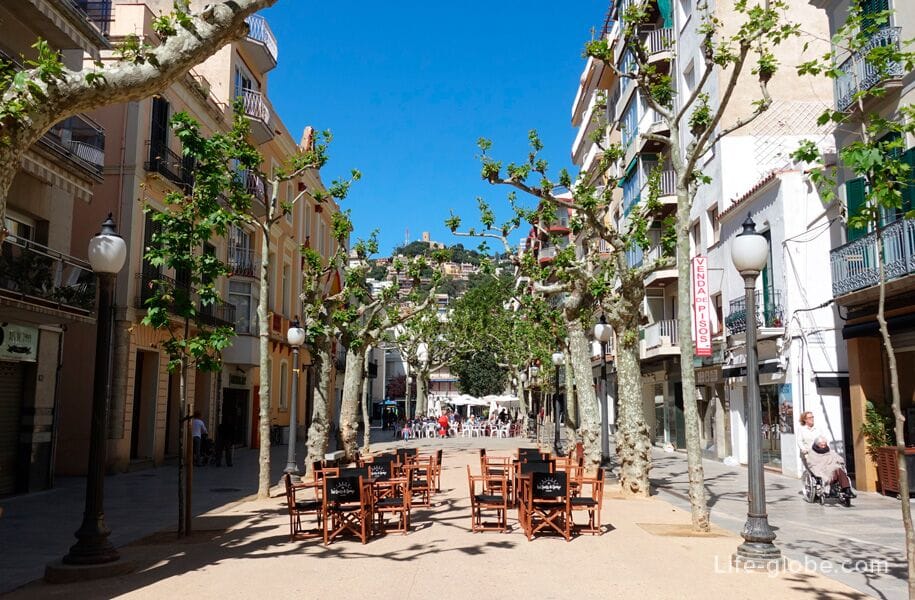 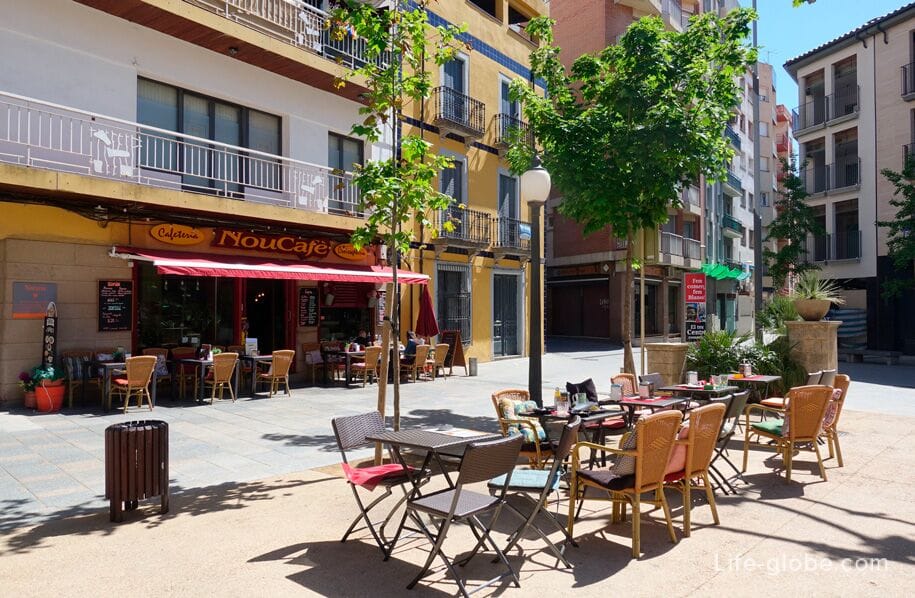 House núria (Núria) is a historic building included in the List of architectural heritage of Catalonia.

The origins of the building are from the 19th century. During its history the house was also widely known as Hotel Núria.

The facade of the building feature large Windows, wrought iron balconies and decorations.

The structure also as the home of Nuria, has three floors. Stands out with bright color, simple lines, balconies, decorations of stucco and cornice.

On the photo: Nuria house on the right, the left - Oliveras 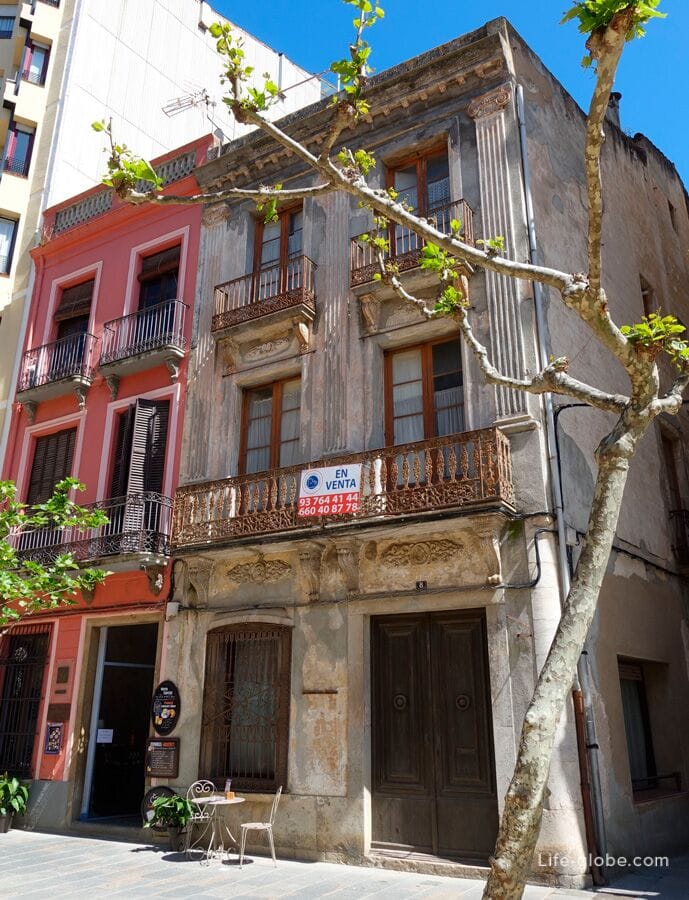 Mina Crystallin font (Font de la Mina Cristal·lina) - light source with a shaped ceramic panels, stone sink, 1860. Above the foundations of the fountain is a reservoir of the same width and a height of about eight feet, which supplied the fountain with water.

Top ceramic decoration contains an inscription in Catalan language, with the title of the source, a depiction of two doves and two dolphins in symmetrical positions respectively, by which the tap is depicted and the sea.

The shell is made of stone and, in its lower part, is also ceramic decor with the image of seaweed and sea grasses. 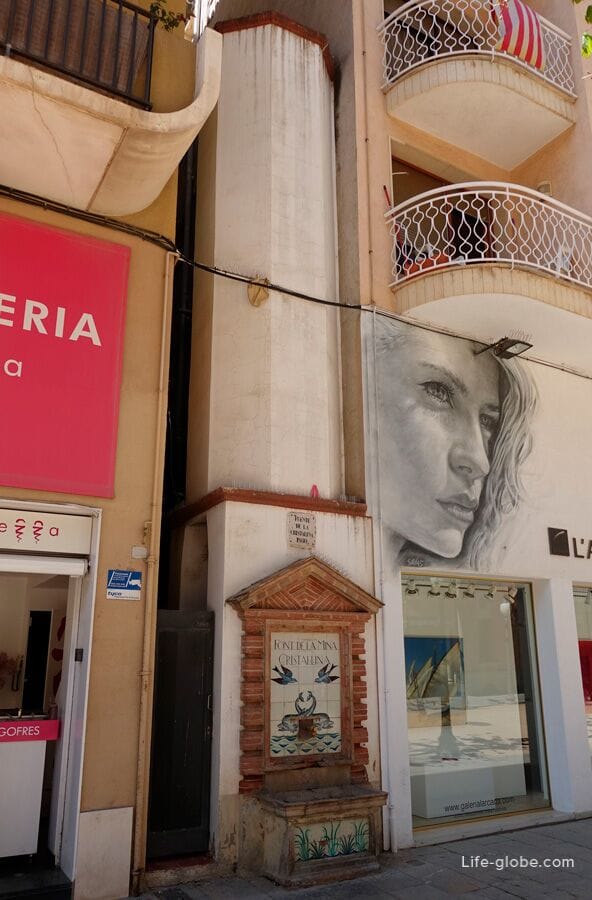 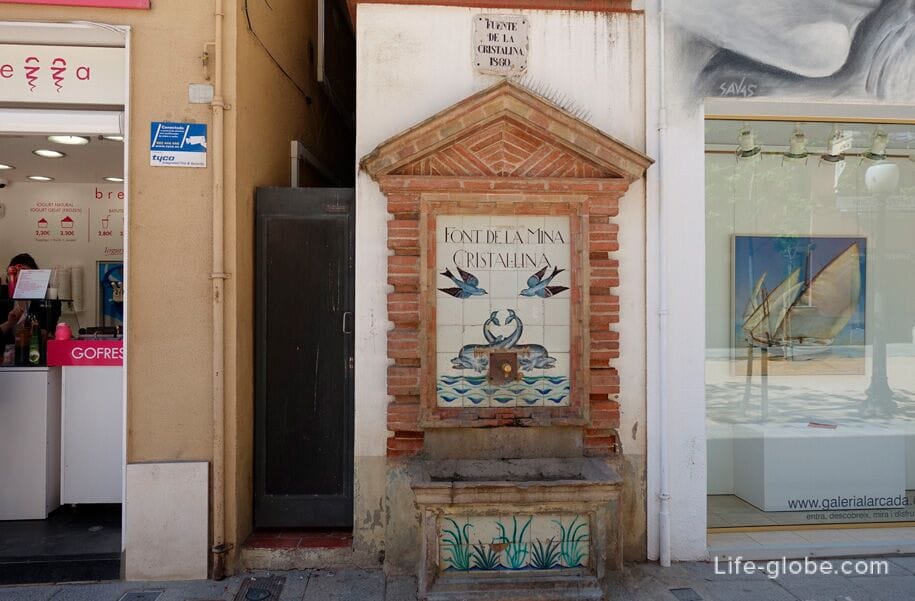 Home town or the Casa del Poble (Casa del Poble) - the 19th-century, has three floors, the bright colour of the facades and classical decorative elements. In the structure of visible curved shape, reminiscent of the modernist style.

On the facades, one facing the street Centre, and another - looking at the main promenade of Blanes, remarkable doors flanked by two fluted columns topped with ionic capitals and balconies, on the one hand, isolated from the General appearance of the house and blend in with the architecture of the front door and make up a unified ensemble.

The facade facing the street Dintre 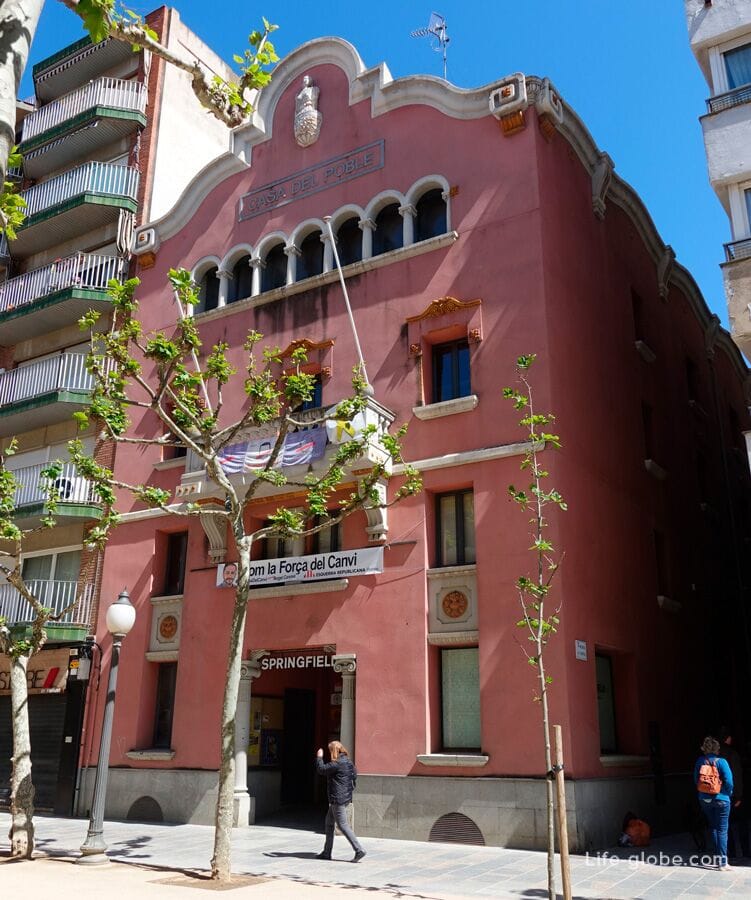 The façade on Passeig Cortils i Vieta (the promenade) 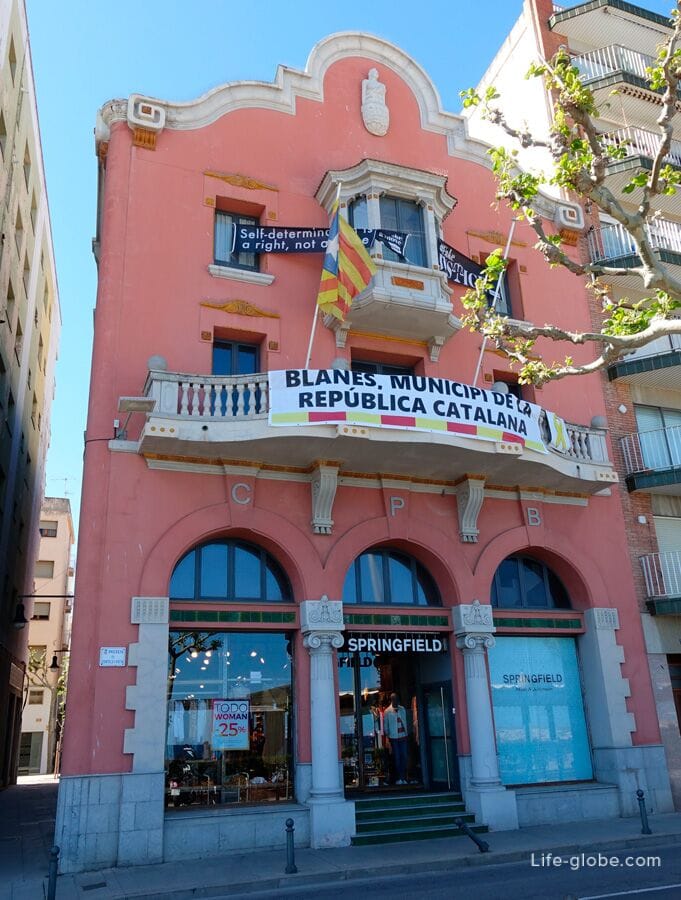 House Tordera (Tordera Can) - the art Nouveau building, built in 1908, and have managed to retain much of its original appearance.

The house, as well as some other buildings of the Costa Brava belongs to the era when local residents went to America seeking fortune, and often returned home with pockets full of money, bringing with it a "non-architecture".

The house has overhanging balcony-a turret, with wrought iron balconies and decorative ornaments of the facades.

Now the house known as the Tordera, after it was purchased by the family. 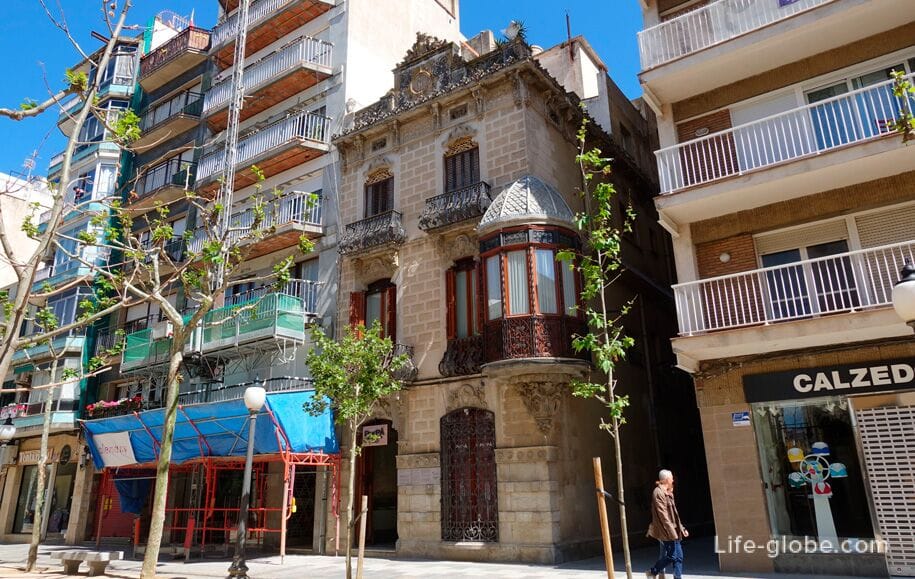 The house has two facades. The main facade facing the street Centre, was restored in 1866.

The main facade is remarkable, pilasters and a Central balcony on the second floor. 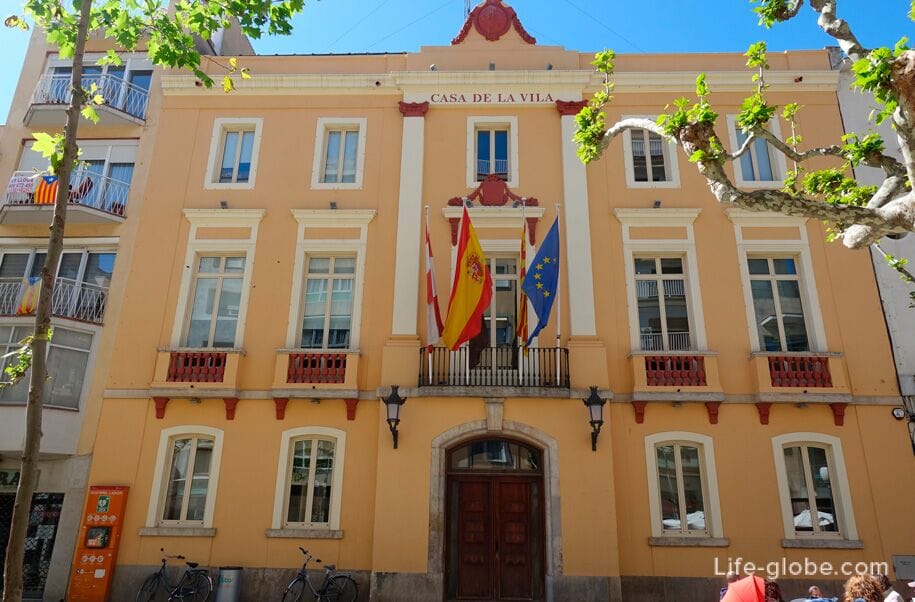