To mount Tauro: the Church in the rock, the ruins of the castle and Taormina from the height of bird flight

From the center Taorimina handy ladder running along the slope of Monte Tauro, you can make a foot ascent. The upgrade is very simple and fast. For Hiking, climbing the mountain, you must go out Via Circonvallazione, from which originate the stage. There are signs 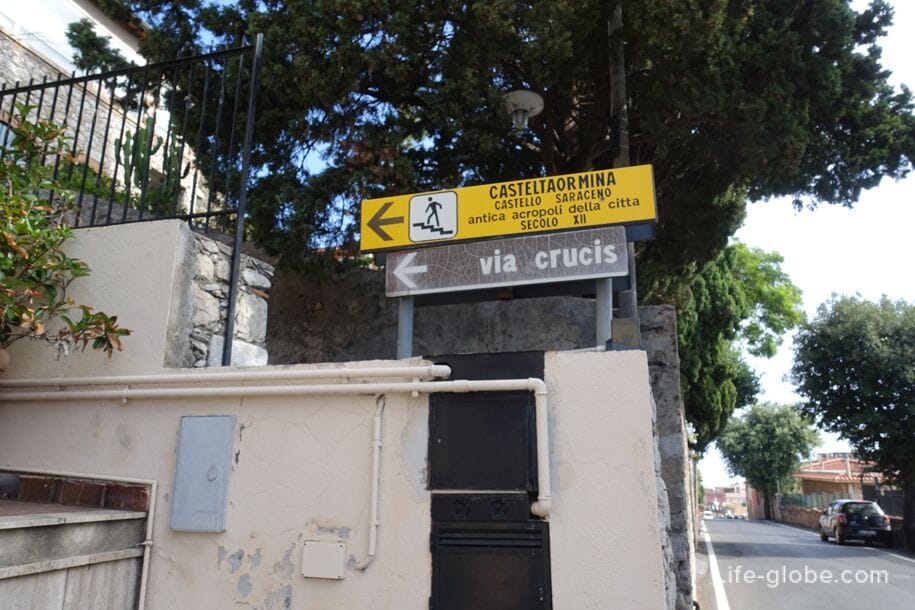 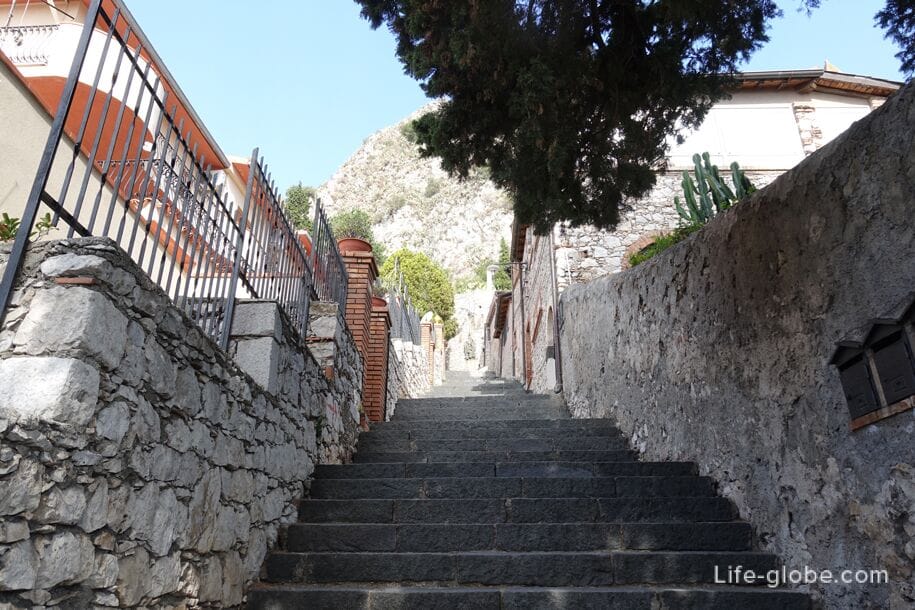 As I said, it is on the mountain slope, easy steps, along which a sculptural image of the Cross of Christ. 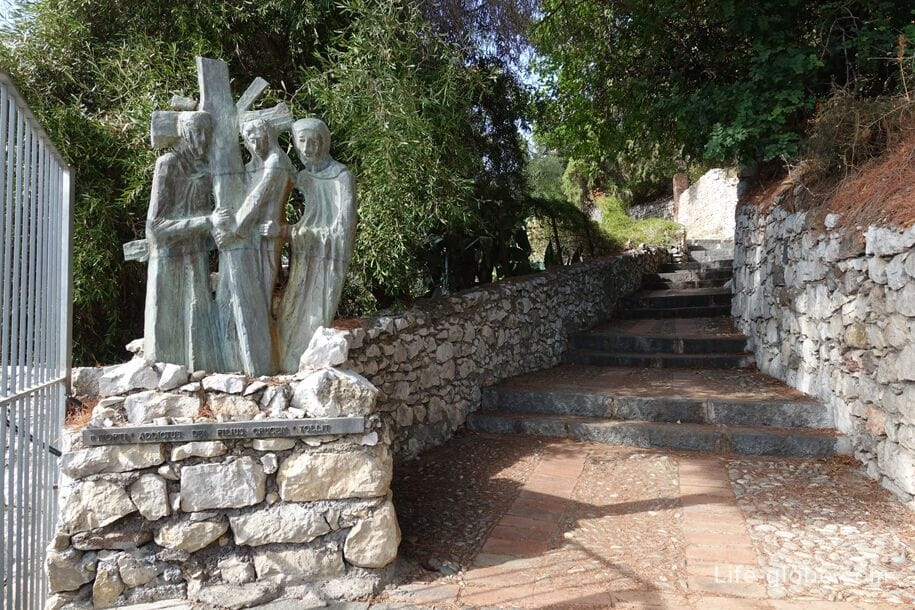 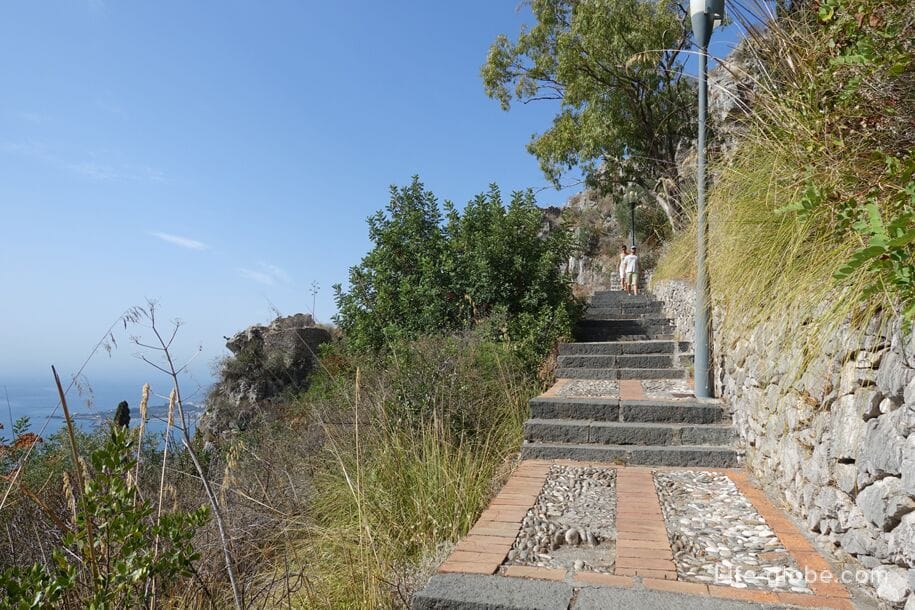 By car from the Centre of Taormina, in the direction of Castelmola.

Upstairs, we find ourselves on a small platform. Here, on the edge of the cliff, we were met with a discreet mind Church of the Madonna della Rocca/Maria della Rocca Church of our lady of the Rock/God the Mother (Chiesa-Santuario S. Maria della Rocca). 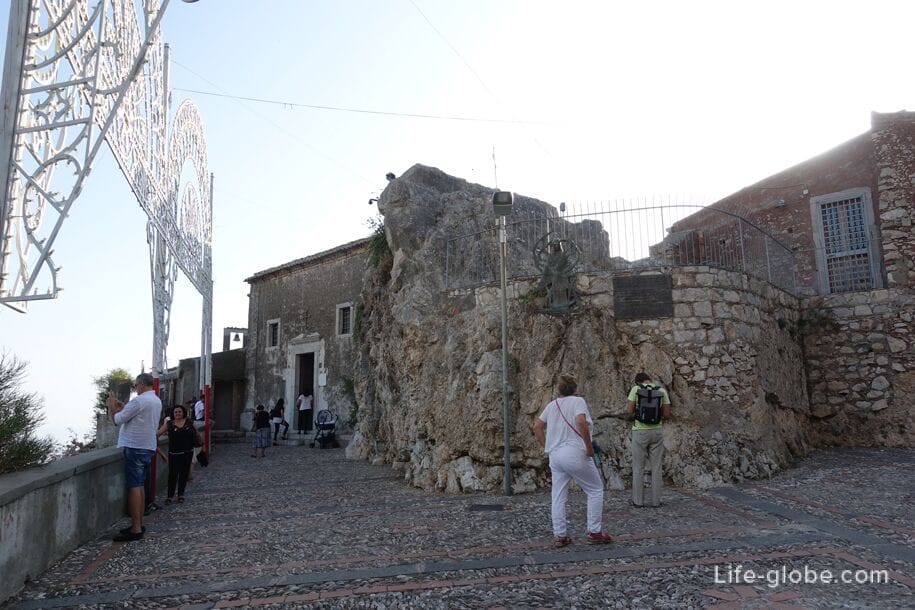 The Church was built in a small cave for extra space of the Church the cave was expanded. The temple was carved into the rock in 1648.

In this regard, part of the ceiling of the Church consists of solid rocky rocks, the so-called stone of Taormina. The architecture of the Church of Santa Maria della Rocca modest and cozy.

This Church is an interesting legend associated. A shepherd boy who tended his sheep at the top of the mountain to shelter from the storm, wandered into a small cave where I met a woman with a baby in her arms. Frightened, he ran for his parents, and when he returned, the woman was gone and in the place where it stood, in the rock was clearly visible in a painting of the Madonna with child in her arms. Since this is a Holy place, and the Church itself - a place of pilgrimage for many believers.

The annual holiday - day of the Madonna Della Rocco falls on the third Sunday of September, and is still celebrated with great solemnity and a large number of people. On this day, the pilgrims go to Church to celebrate such a significant day for the believers. 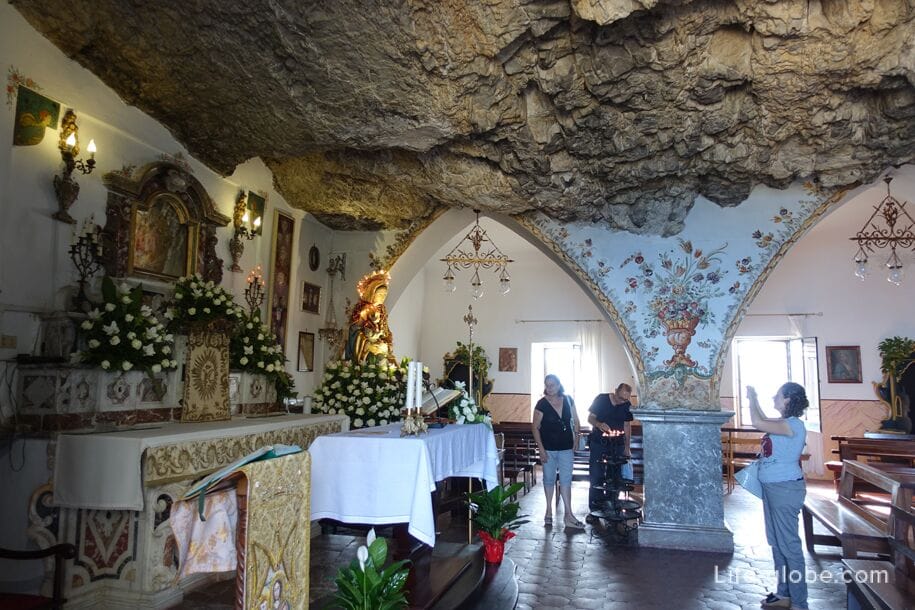 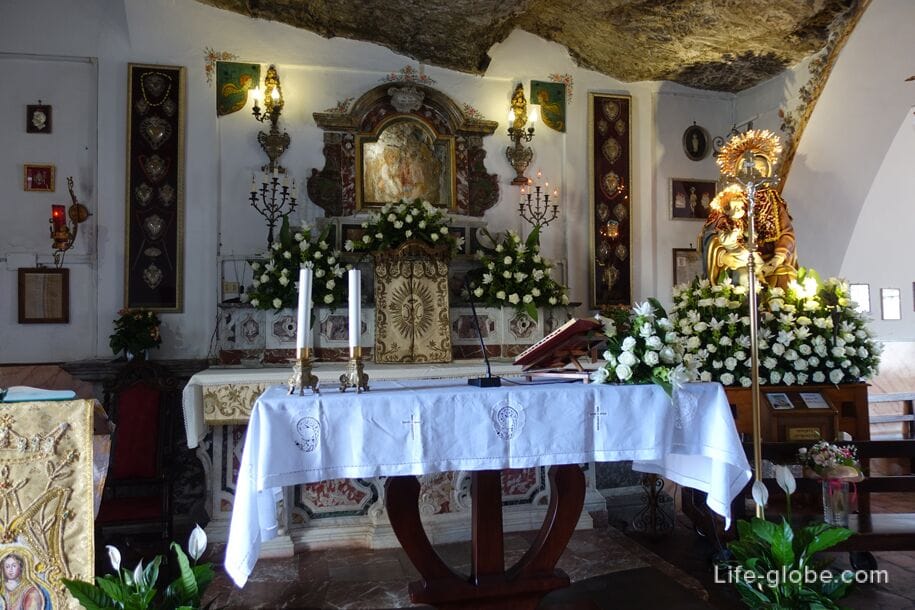 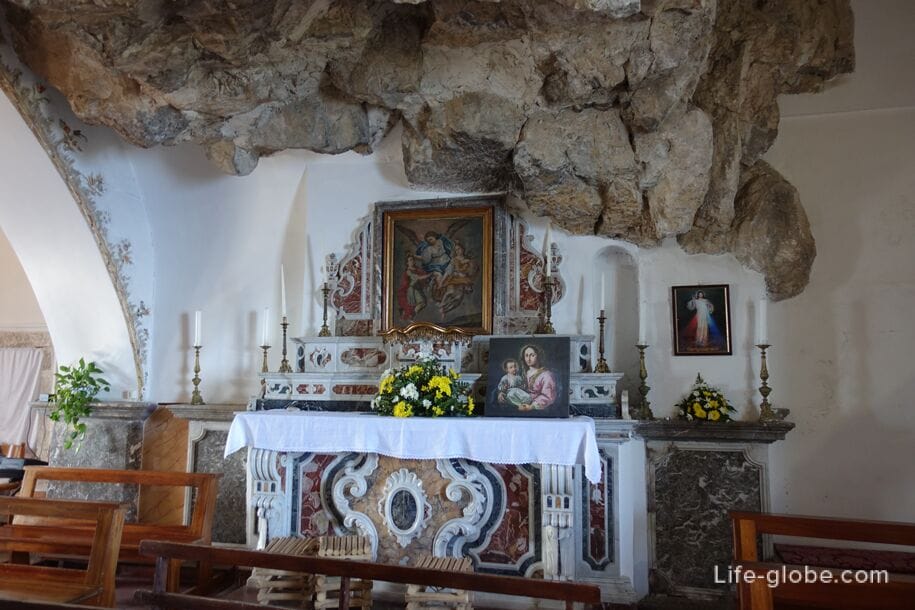 Near the Church, on the edge of the cliff, is a large concrete cross, erected in 1930. The cross is clearly visible from the centre of Taormina. And at night the cross glows, thus attracting the attention and dominating over the whole of Taormina. 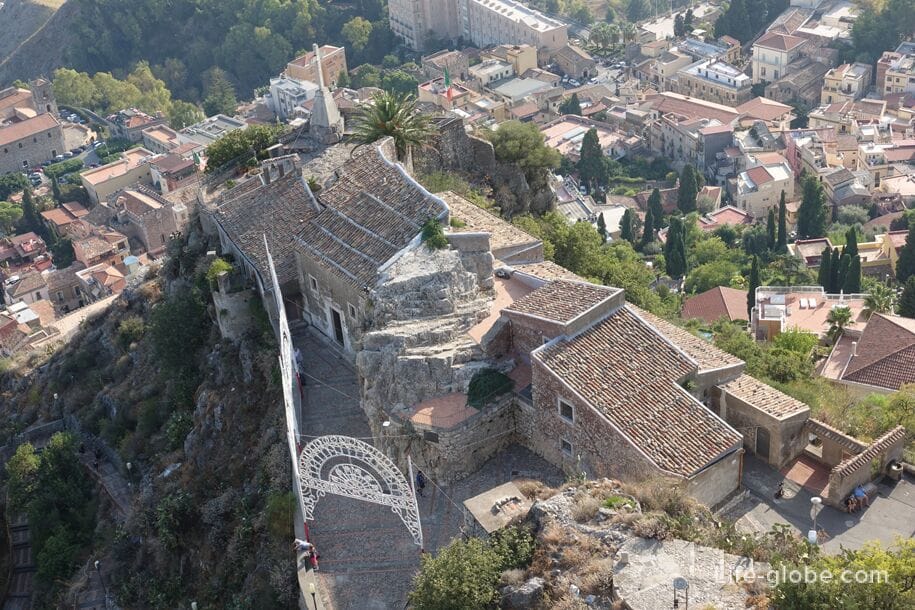 The Playground near the Church with beautiful views over Taormina and the sea. 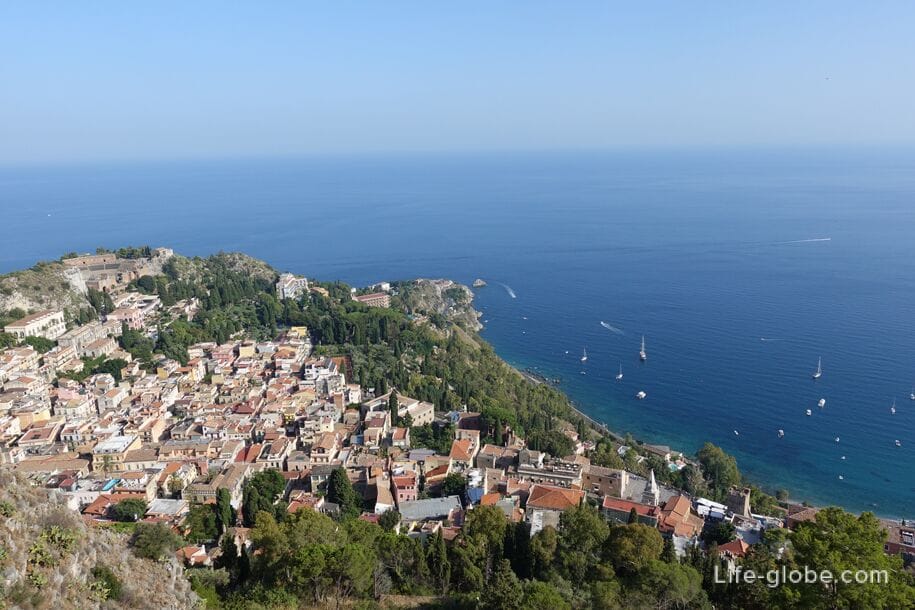 Behind the Church are several souvenir shops, a snack stand and a drinking fountain. From this point also offers picturesque panoramic views. 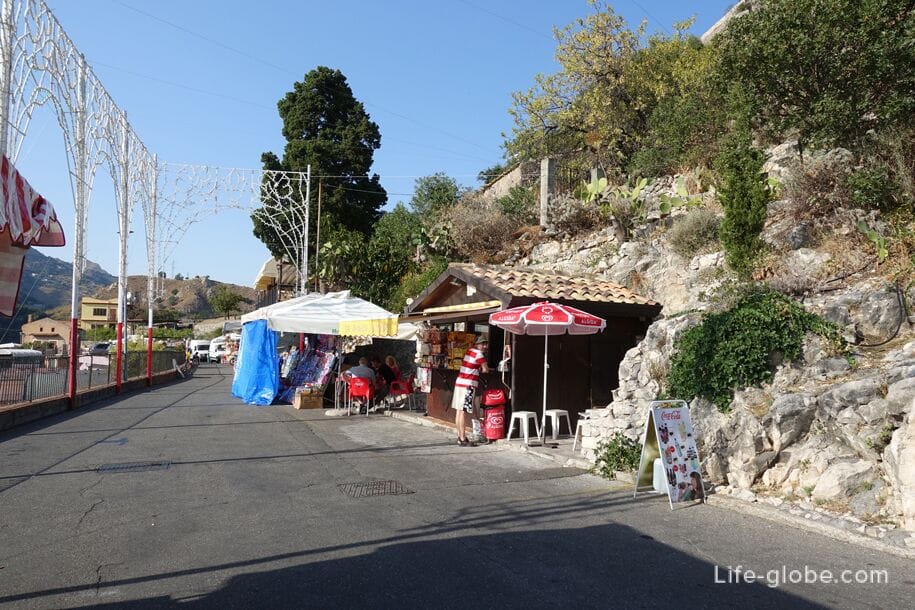 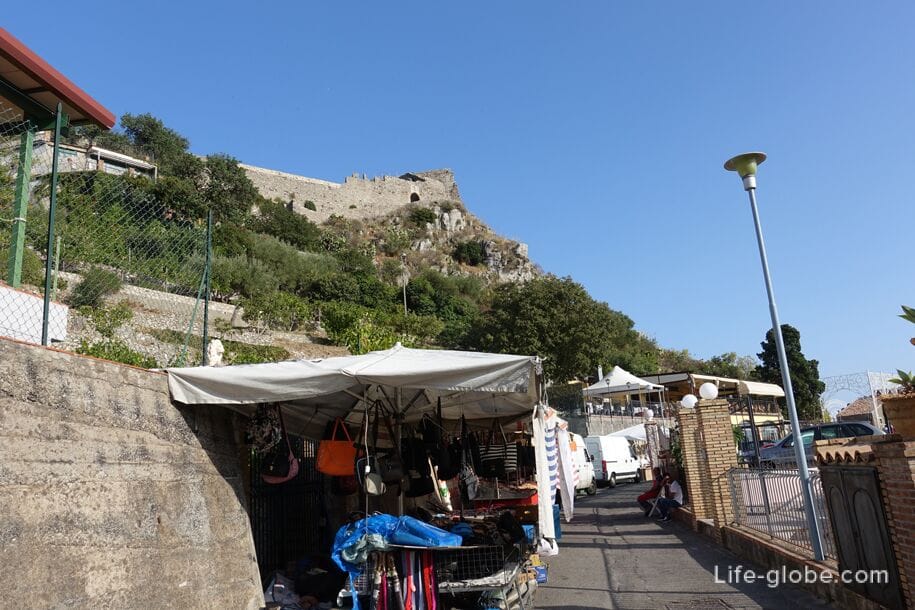 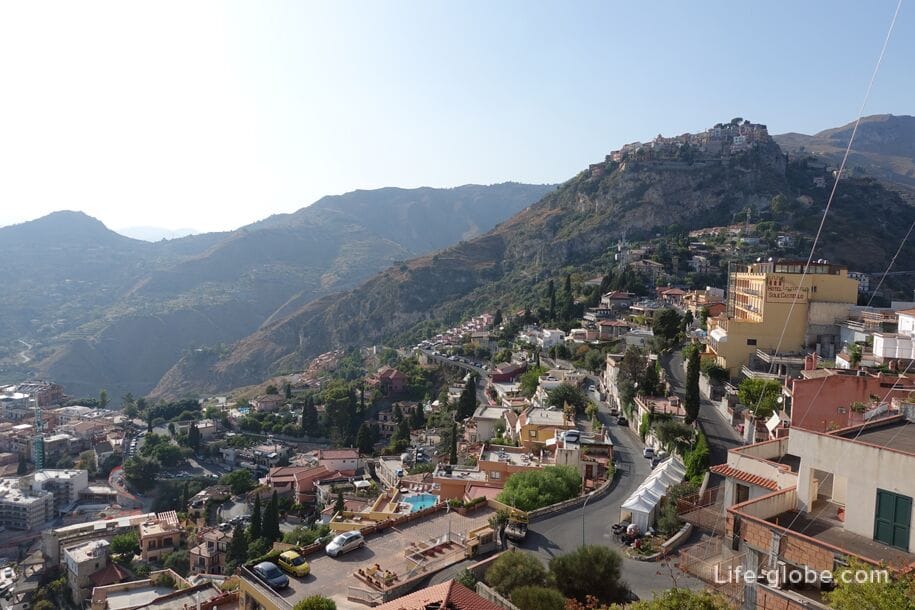 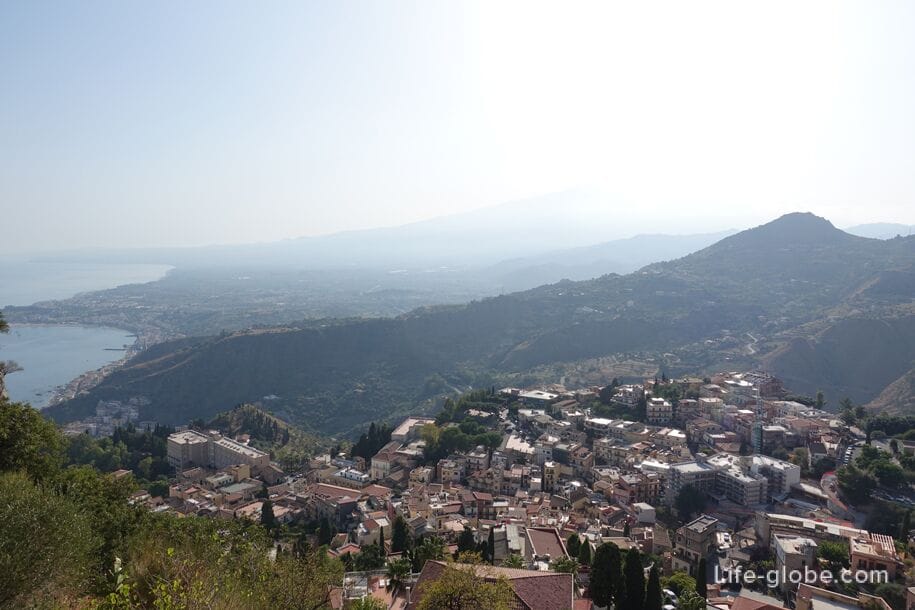 Here you can see the castle of Taormina's Saracen castle (Taormina Castle/Castello Saraceno). To the castle are carved into the rock steps. 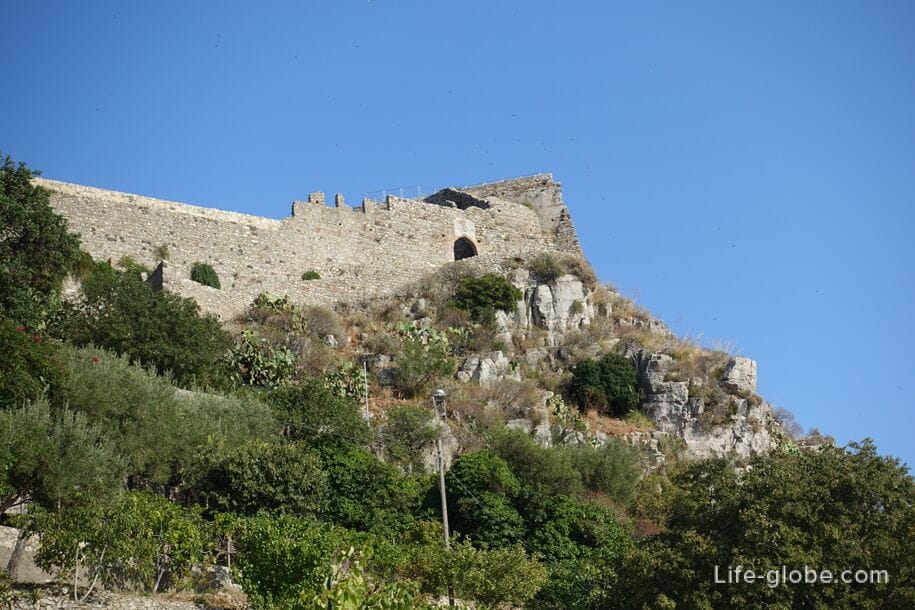 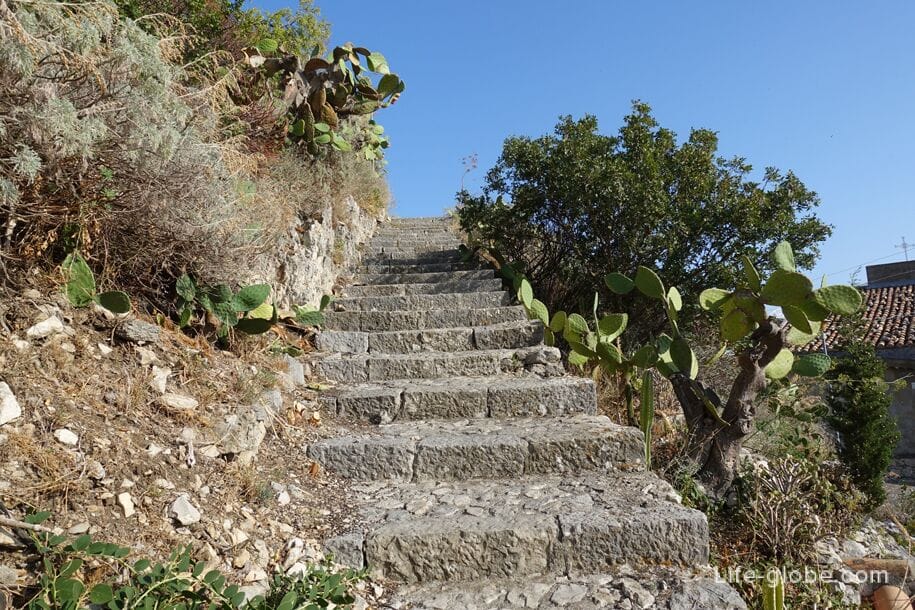 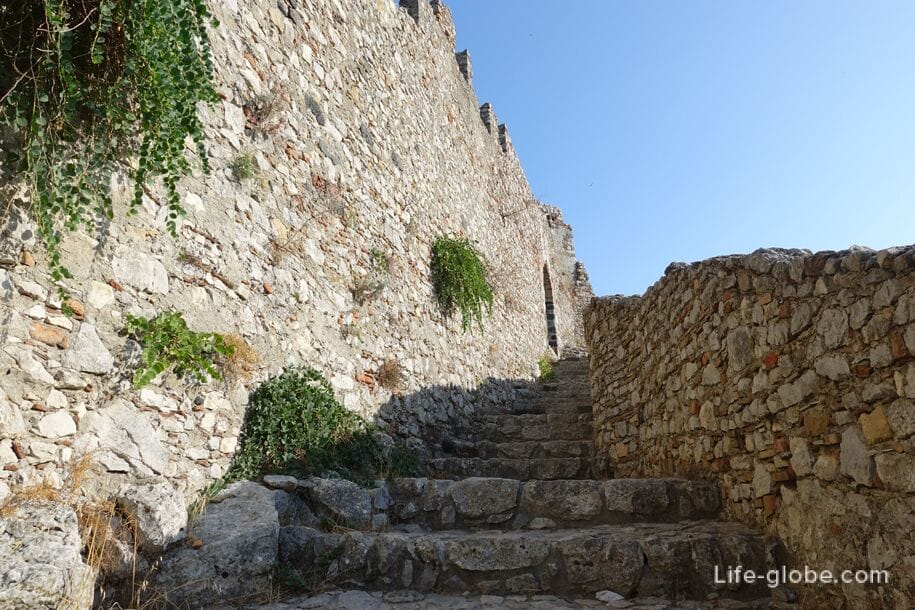 Currently, the castle remained only ruins: the courtyard, overgrown with grass and ruined walls. Entrance to the ruins is forbidden for a long time. Block the passage of the iron gates, however, currently, the gate is a hole, in which you can enter (still not sealed, and safely used by tourists to enter the territory of the castle). 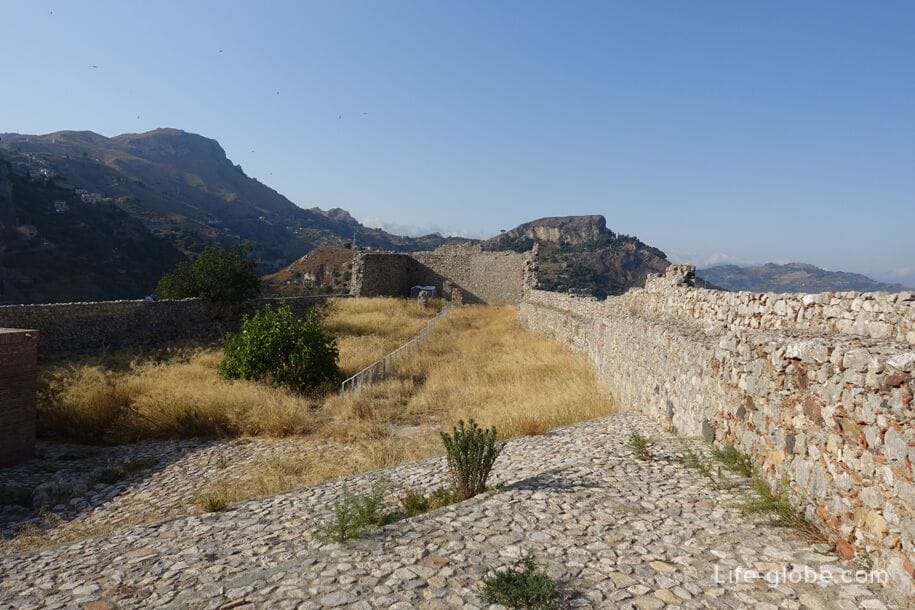 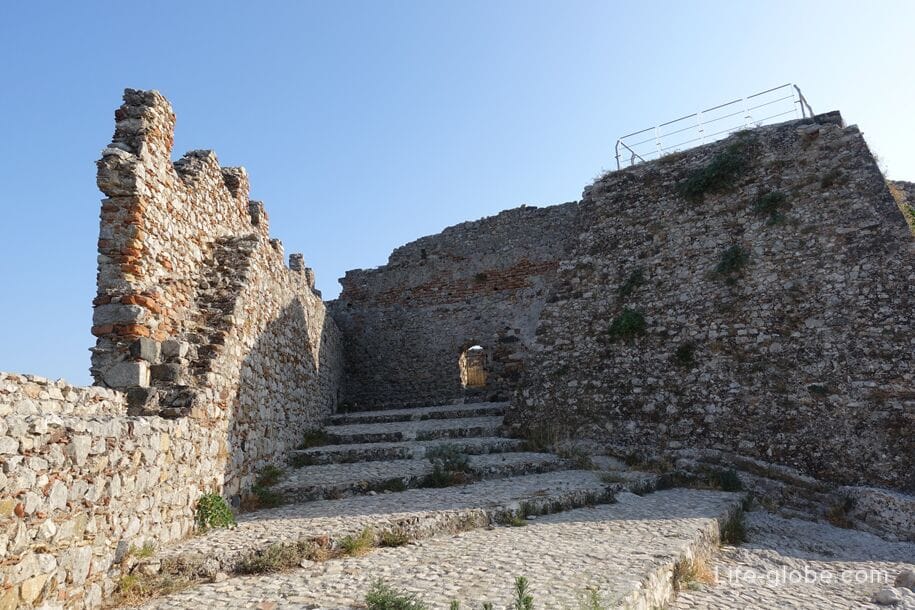 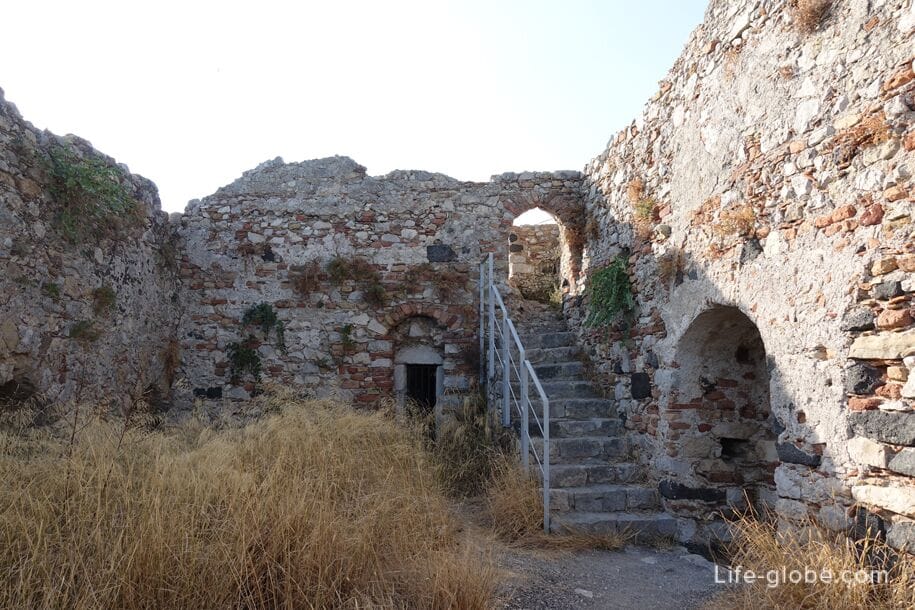 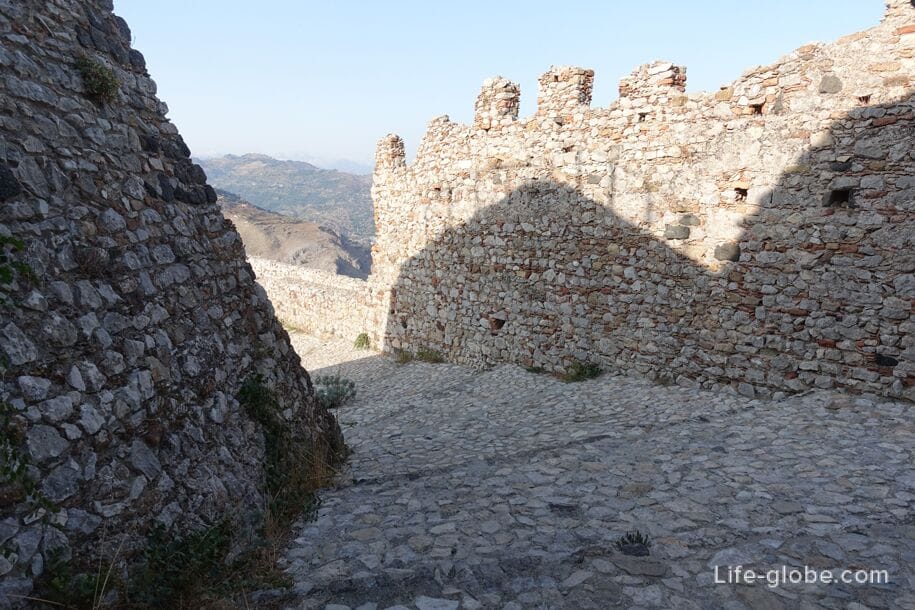 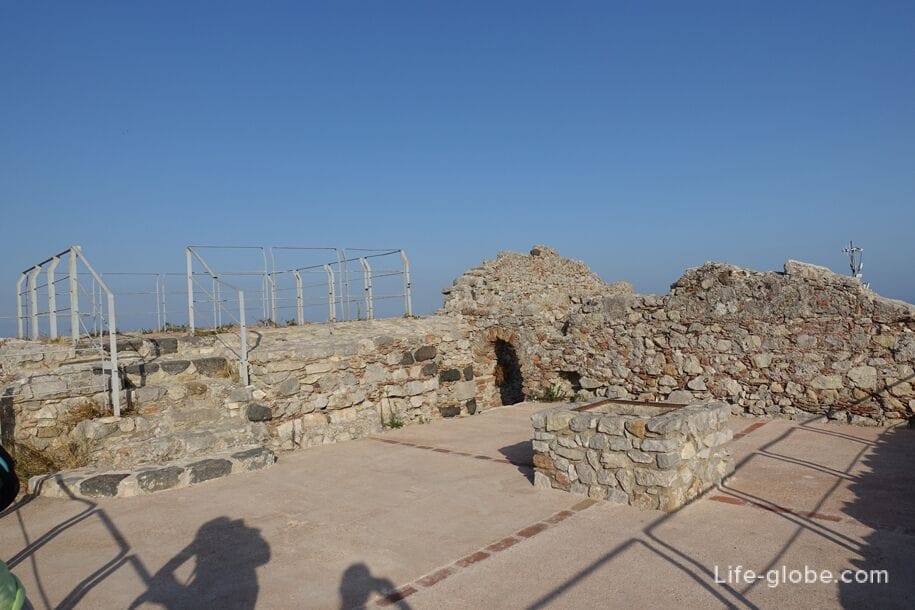 But of greater interest is not the ruins themselves and the views from the castle grounds a 360-degree view, allowing to enjoy beautiful views of pristine nature, as well as Taormina and the surrounding area. 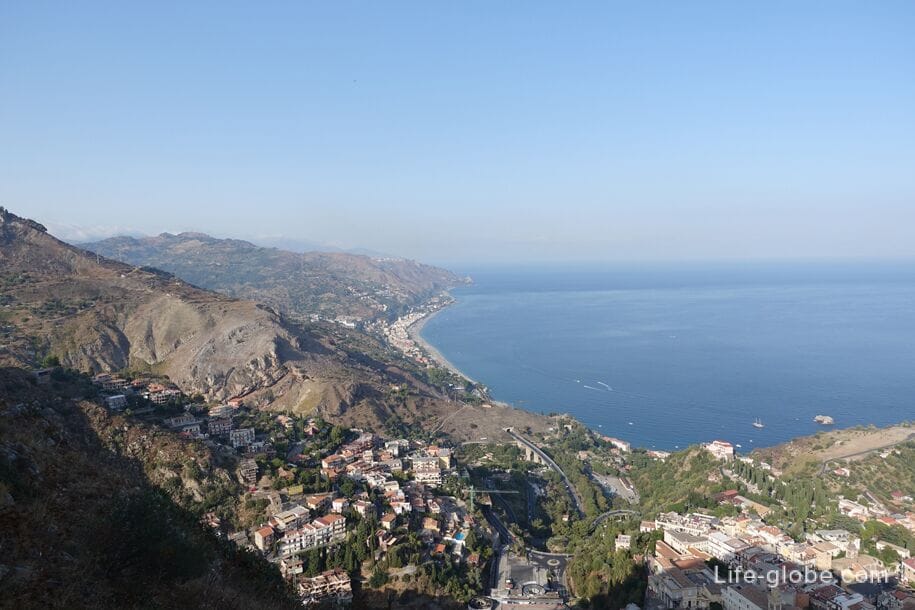 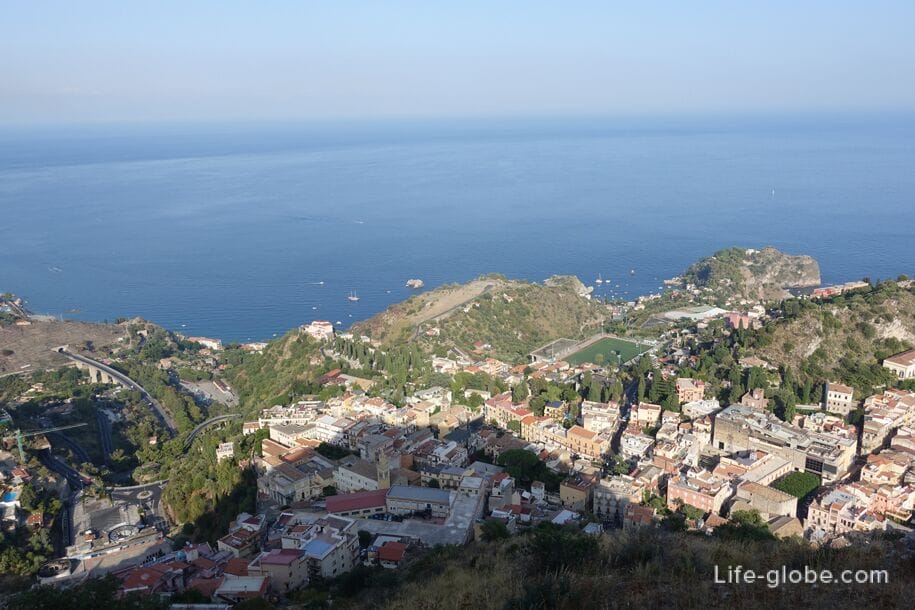 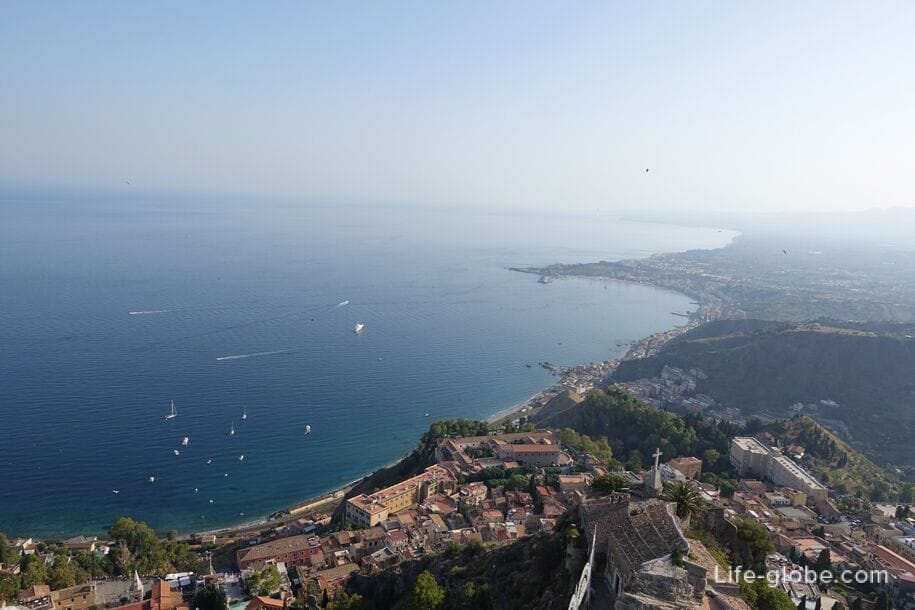 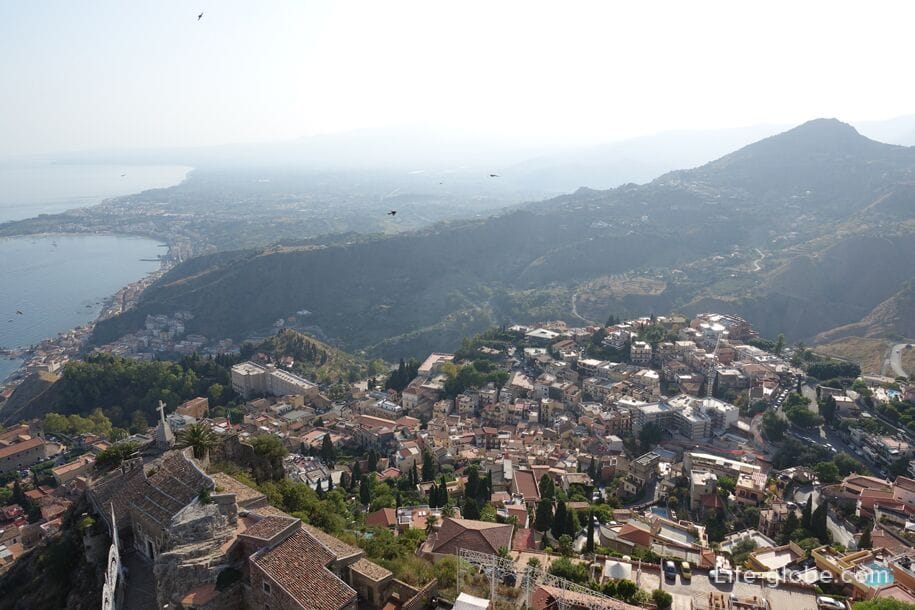 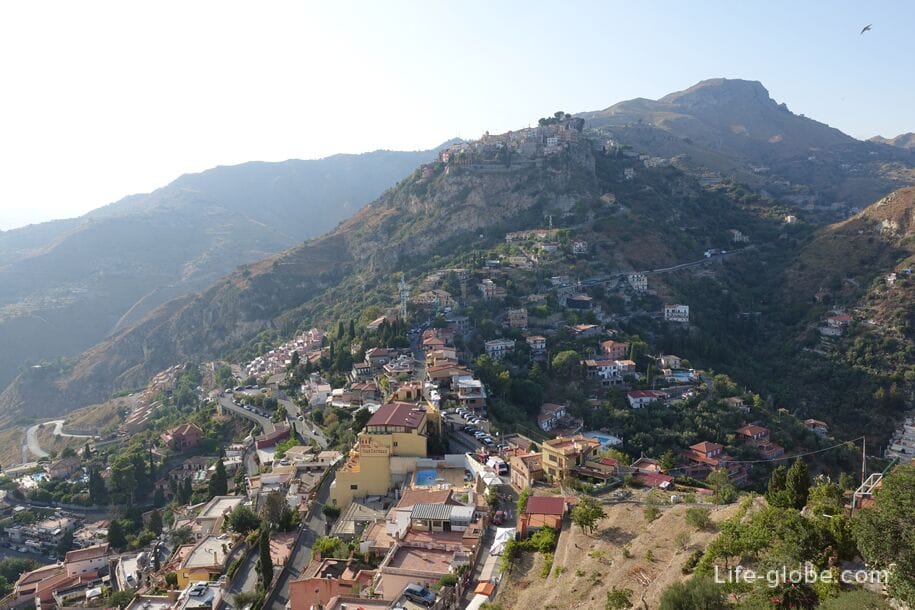 Etna is the highest volcano in Europe. A...