The Marble Palace is a monument of Russian architecture of the late 18th century, located in the center of St. Petersburg on the Palace Embankment of the Neva River.

Today, the Marble Palace is part of the architectural complex of the State Russian Museum. Some of the museum's collections are displayed within its walls and temporary (rotating) exhibitions are held.

The Marble Palace was the first building to be decorated with natural stone.

The exterior facades of the palace represent the main artistic value - they have survived to this day, with only a few exceptions, in their original form.

The palace was built in 1768-1785 by the Italian architect Antonio Rinaldi, on the site of the Post Yard with a pier, where Peter the Great held solemn events.

The palace was built by order of the Empress Catherine II for the general-field-master-Count Grigory Grigoryevich Orlov, for his help in raising Catherine to the throne. But Orlov did not live to see the completion of the construction of the palace (he died in 1783).

As a result, Catherine II gave the palace to her second grandson, Grand Duke Konstantin Pavlovich, in honor of his marriage in 1796.

After the death of Konstantin Pavlovich in 1831, Emperor Nicholas I gave the Marble Palace in the possession of his second son - Konstantin Nikolaevich.

In 1844-1849, the palace was restored with a change of interiors designed by architect Alexander Bryullov.

The sons of Konstantin Konstantinovich, who inherited the Marble Palace with the neighboring Service House, for lack of funds for the maintenance of the complex of buildings were forced to sell it to the national property. These events took place in the autumn of 1917, when the Provisional Government was already in power in Russia and the Ministry of Labor was located in the palace.

In the following years, the walls of the palace housed: academy and branch of the V. I. Lenin Museum.

In 1991, the building of the former Marble Palace was transferred to the State Russian Museum, which it is still today.

Today, the marble palace is a unique monument of Russian architecture of the second half of the 18th-early 19th centuries and one of the few examples of early classicism in St. Petersburg.

The facades of the palace are faced with natural stone - the first floor is faced with red granite and marble, the second and third floors-light gray granite.

The second and third floors look like a single ensemble and are united by pilasters and three-quarter columns made of pink Tivdian marble, with white marble bases and capitals.

The window frames are made of grey Ruskeala marble. And between the windows of the second and third floors there are relief white marble garlands.

The upper part of the palace is decorated with vases made of gray dolomite. 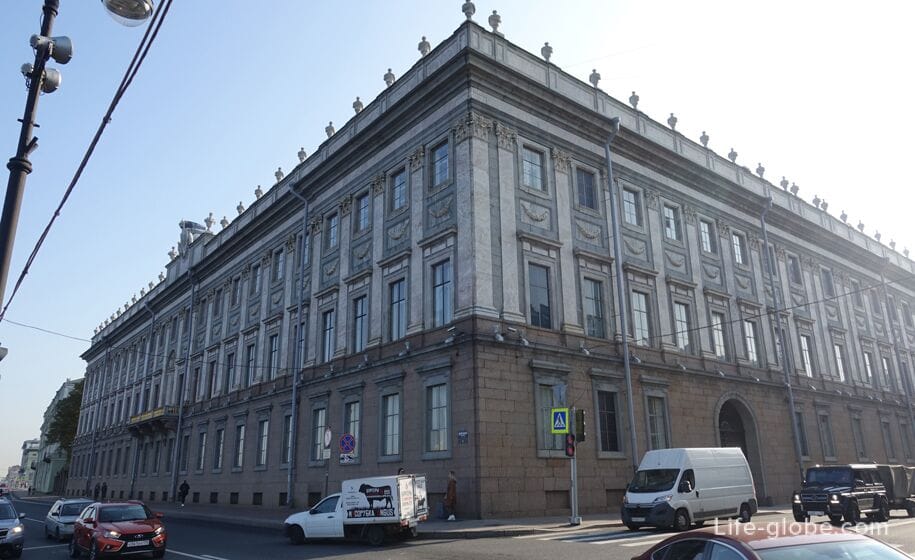 View of the Marble Palace, the Palace Embankment and Palace Bridge with Trinity Bridge 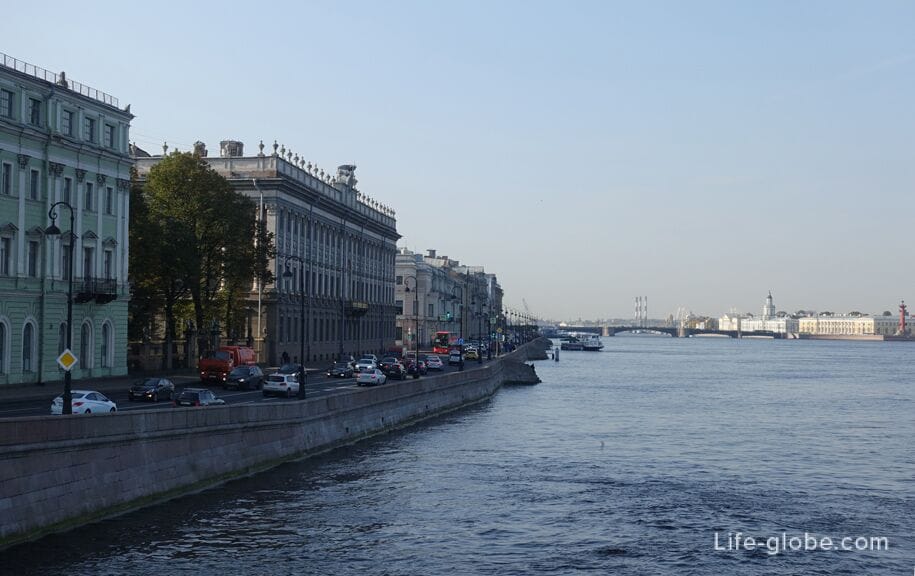 The southern facade of the palace faces the Champ de Mars.

The south and north facades have balconies at the second floor level.

The doors of the balconies are enclosed in niches with semicircular endings and are topped with a cartouche on the attic of the building. The balcony railings are made of marble with gilded bronze balusters. 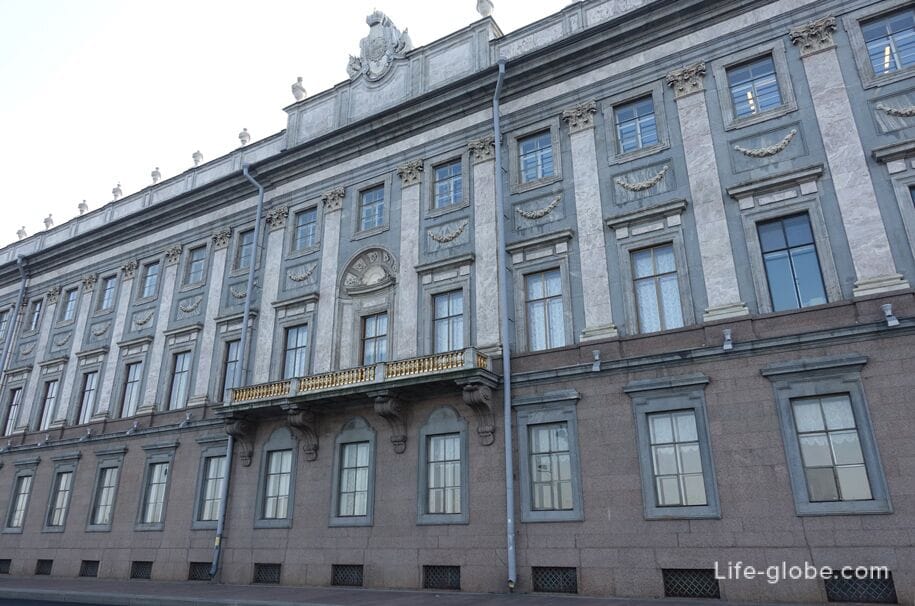 The complex of the Marble Palace also includes the Service House (service building), built by the architect P. E. Yegorov in 1780-1787 and is a separate building standing to the east of the palace.

Both buildings are connected by a fence. The wrought iron fence has gilded decorative elements and is placed on a plinth of red granite.

Architecturally, the service house differs from the palace, but still has the features of unity.

The address of the service house: 6 Dvortsovaya Embankment / 5 Millionnaya Street). 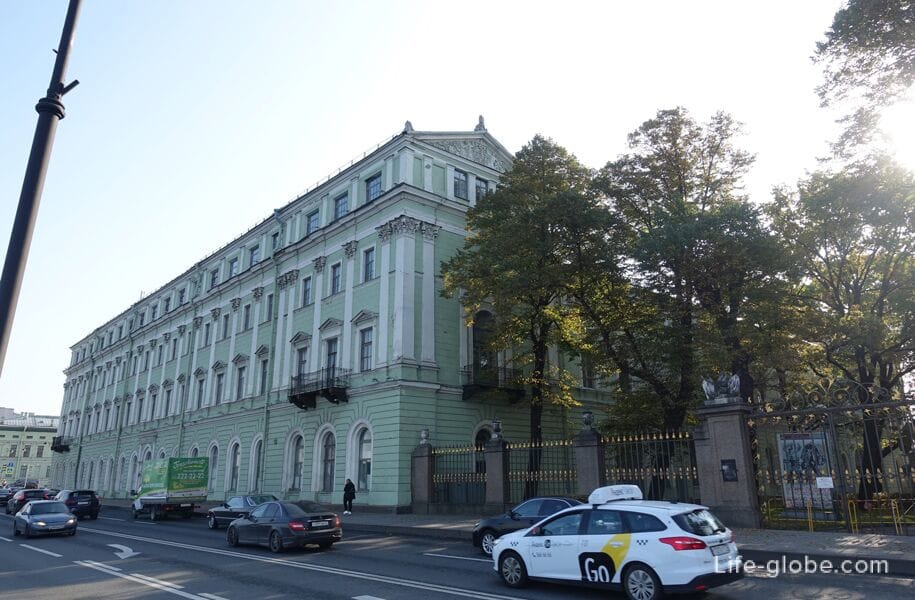 View of the fence and the Marble Palace 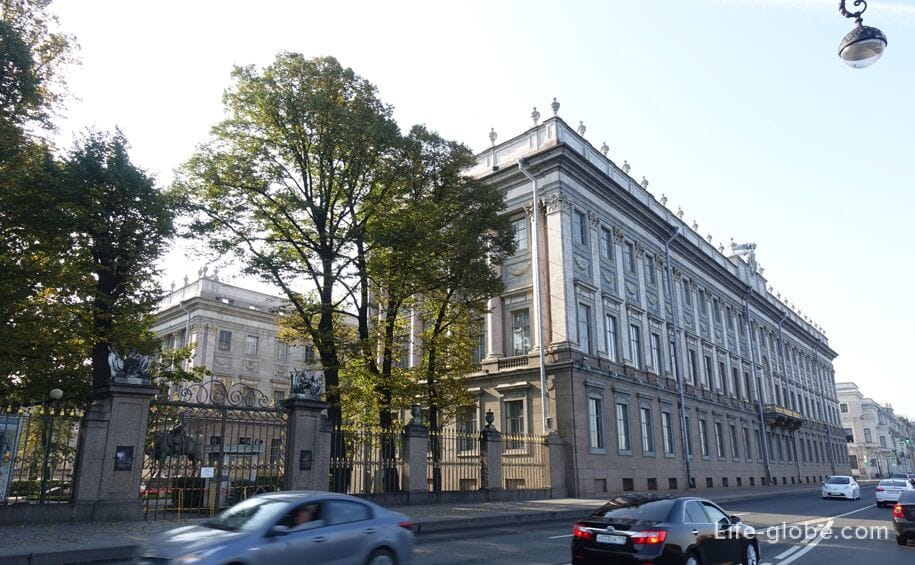 Between the two buildings is formed the main courtyard, which faces the main (eastern) facade of the Marble Palace.

The facade is crowned by a clock pavilion decorated with marble vases, which houses the palace chimes, recreated by the Russian Museum in 1999.

In front of the entrance to the Marble Palace there is an equestrian statue of Emperor Alexander III by the sculptor P. Trubetskoy. The statue is an outstanding monument of Russian monumental sculpture of the early 20th century and until October 1937 it decorated the center of Vosstaniya Square in St. Petersburg. 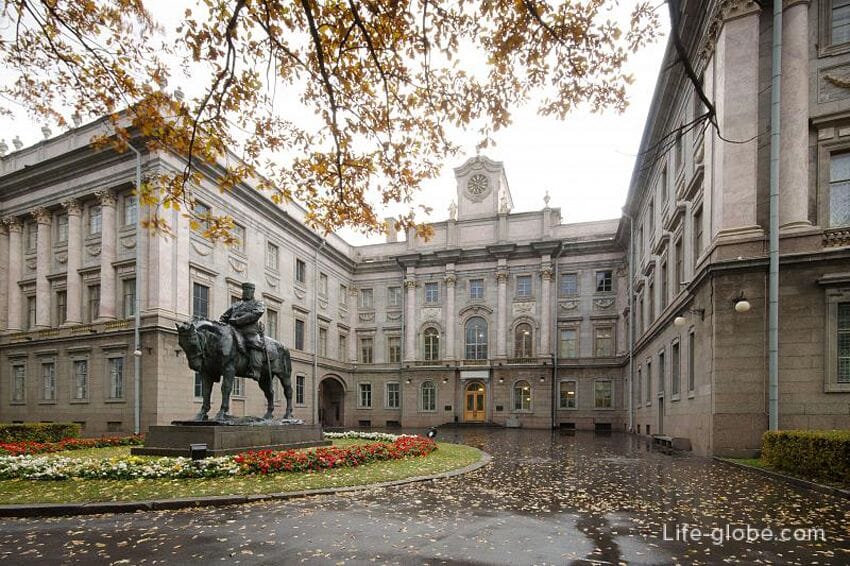 Russian Museum in the Marble Palace

Within the walls of the Marble Palace, you can see some of the restored rooms and halls of the palace. 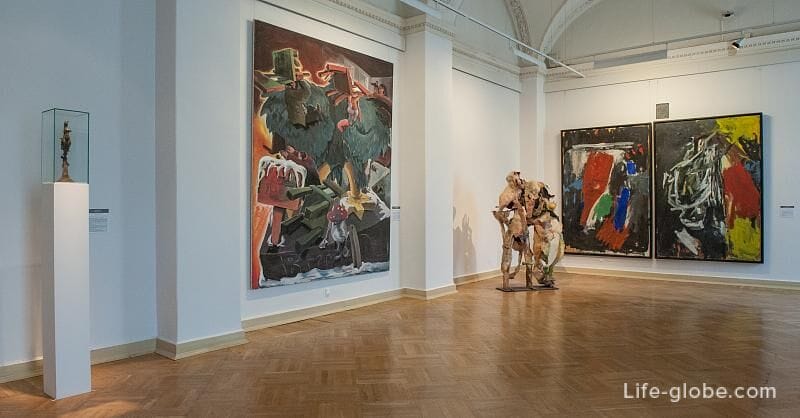 - a memorial exhibition dedicated to Grand Duke Konstantin Konstantinovich Romanov , a Silver Age poet who wrote under the kryptonym.

The exhibition, which tells about his life and work, is opened in the original interiors of the study and music room of the Grand Duke, who was the last owner of the Marble Palace; 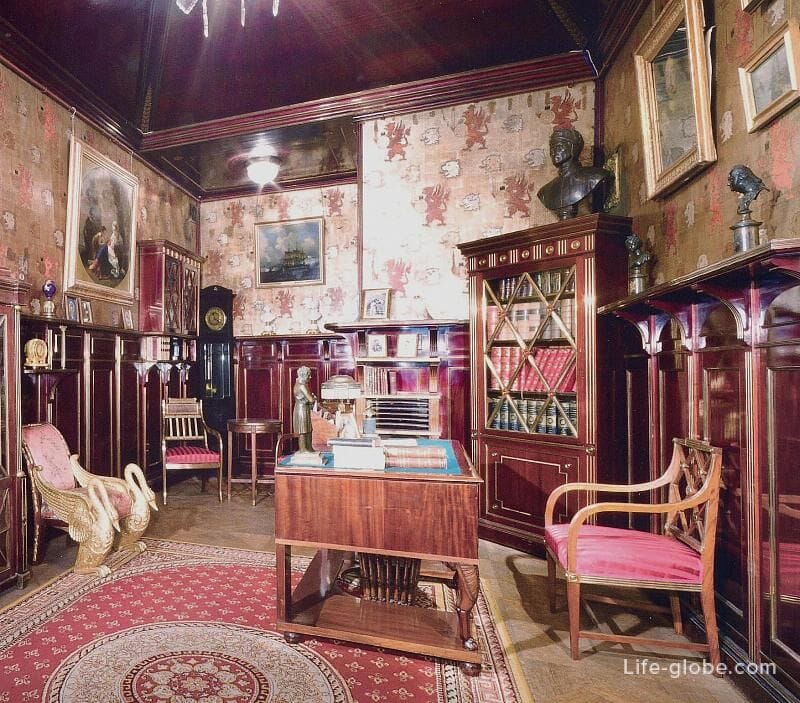 - collection of works of art by the St. Petersburg collectors of the brothers Yakov Alexandrovich and Joseph Alexandrovich Rzhevsky.

The collection, which includes paintings, drawings, sculptures and decorative and applied arts, includes 503 works, half of which are paintings and graphics of the second half of the 19th and early 20th centuries. 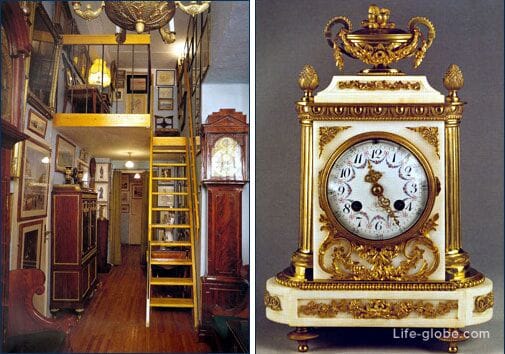 Some of the former residential and ceremonial interiors of the palace are made in the eclectic style and differ both in the variety of historical styles and materials in the decoration.

At the entrance to the Marble Palace, guests are greeted by the Grand Staircase, which has retained its original decoration almost unchanged.

The staircase is finished in various varieties of colored marble. Opposite the entrance, on the wall is a marble relief depicting the architect A. Rinaldi (the master is unknown).

The artistic decoration of the Grand Staircase includes sculptures made of Italian marble and installed in niches, as well as relief compositions on the walls of the third floor and stucco decoration of the ceiling. 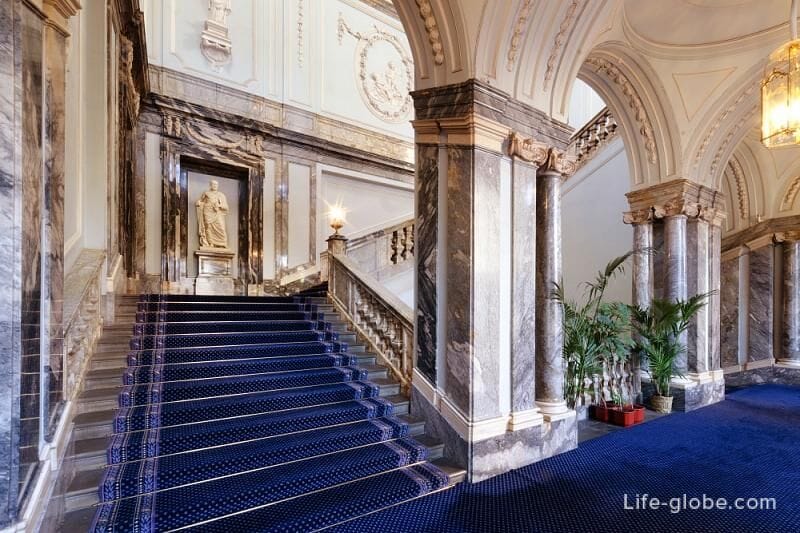 Another unique creation in the walls of the palace is the Marble Hall, the original decoration of which has largely survived to this day.

The walls of the hall are lined with various types of domestic and Italian marble. The pilasters are made of Tivdian marble with bronze gilded bases and capitals. They are supported by a plinth extending along the perimeter of the walls, divided by panels of green Italian marble, which are filled with relief images of vases with draperies.

Along the perimeter of the walls of the hall there are 14 round bas-reliefs on the theme of "Sacrifices", made by the sculptor Fyodor Shubin in collaboration with the Italian sculptor Antonio Valli.

On the western wall there are two bas-reliefs by M. Kozlovsky: "The return of Regulus to Carthage" and "Camillus delivers Rome from the Gauls".

The ceiling of the hall is decorated with a picturesque plafond by S. Torelli "The Wedding of Cupid and Psyche". 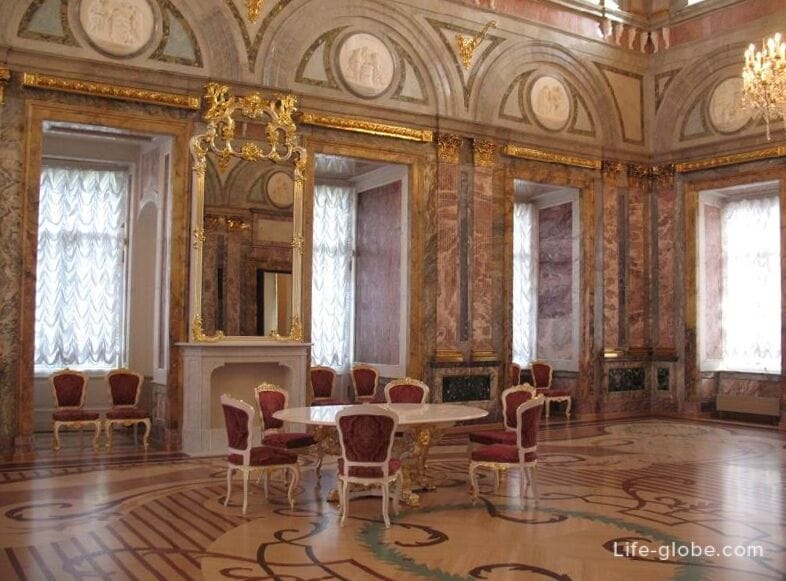 In the White Hall, along its perimeter, the figures of Russian knights and sculptural images of double-headed eagles, the stucco decoration of the ceiling are recreated. Chandeliers and sconces are recreated from gilded bronze. The floor of the hall is laid with stacked parquet.

The White Hall is also called "Two-light" or "Gothic", because of the elements of the neo-Gothic style used in its design. 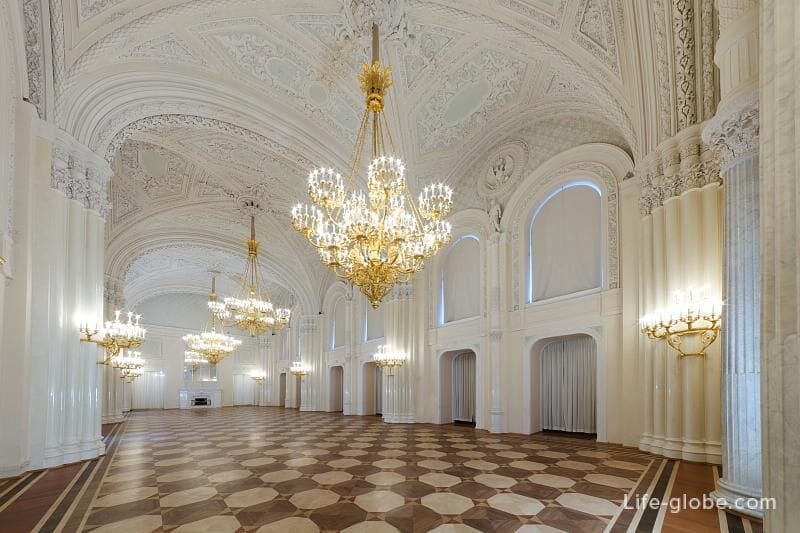 The winter Garden of the Marble Palace occupies the space of the second and third floors.

The decorative arches of the garden ceiling arch are supported by cast-iron columns and semi-columns. The metal ceiling above the third floor has caissons.

On the east wall, a small balcony with an elegant wrought-iron grille is recreated.

In the middle of the garden, on the mosaic stone floor, there is a marble fountain with three bowls.

In the Flower Garden there is a recreated marble fireplace with a mirror. 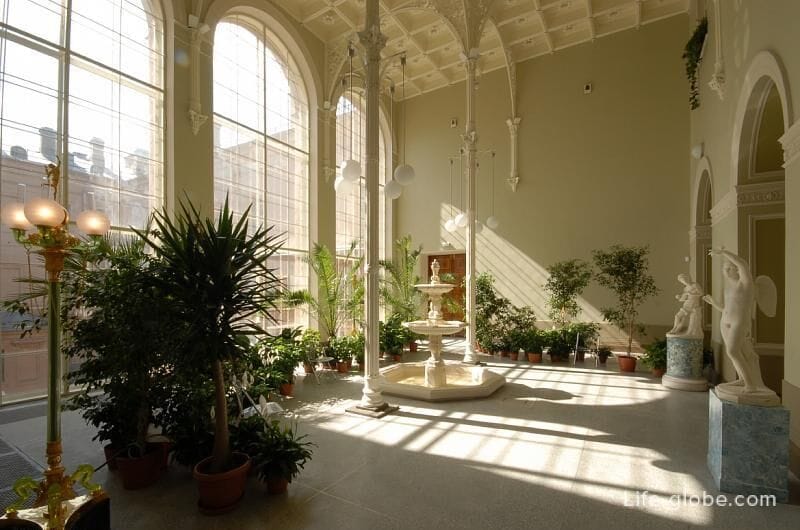 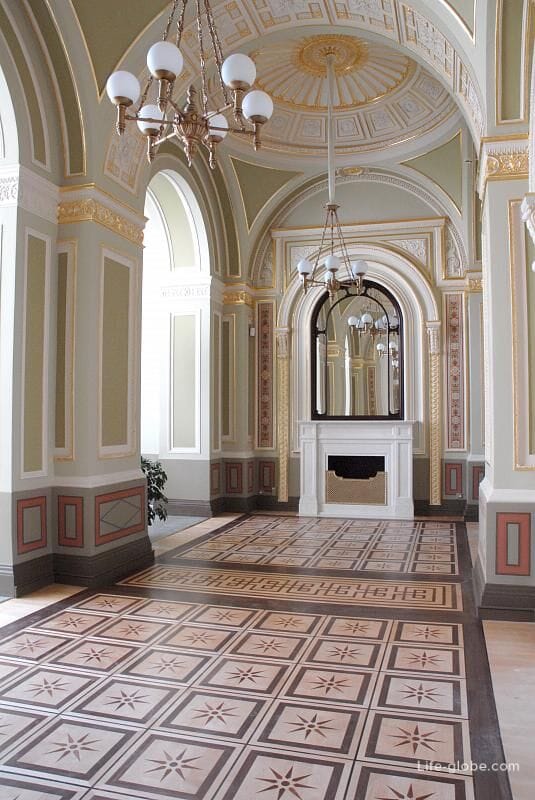 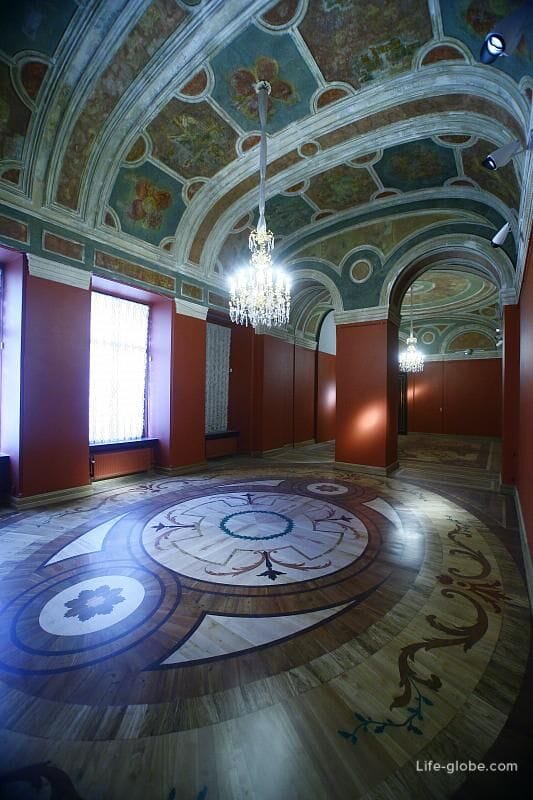 The address of the Marble Palace: 5/1 Millionnaya Street.

In addition to permanent exhibitions, temporary (rotating) exhibitions are also held within the walls of the Marble Palace.

In the cash register hall of the Marble Palace, you can check the schedule of temporary exhibitions of the Russian Museum and its branches. 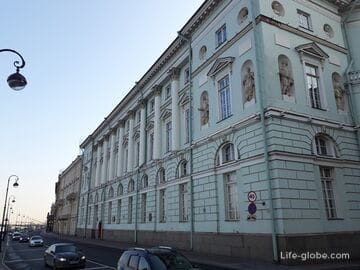 Winter Palace of Peter I and the Hermita... 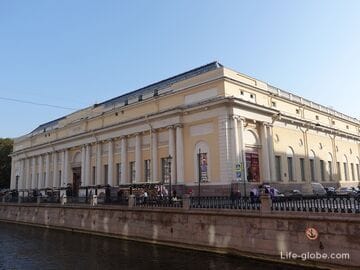 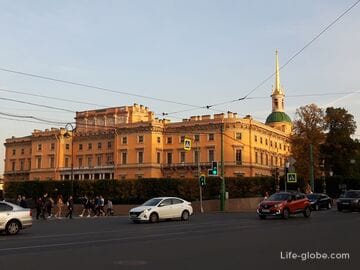