How to get from the airport of Malta to the cities and of the resorts of the island of Malta (Vallettta, Sliema, St. Julians, Marsaxlokk, Bugibba, Mellieha, etc.)

In the territory of Malta only has one airport - Malta international airport.

Malta international airport is relatively small, but comfortable, has everything you need: tourist information agency, shops, cafes, toilets and car Parking near the airport terminal.

The airport of the Republic of Malta is located on the island of Malta of the same name, in the municipality of Luqa (Luqa LQA 4000, Malta), 6-8 kilometers from the capital city of Valletta (the Triton fountain).

Airport regularly sends and receives flights from many cities in Europe, Asia and Africa. Cheap tickets to Malta... 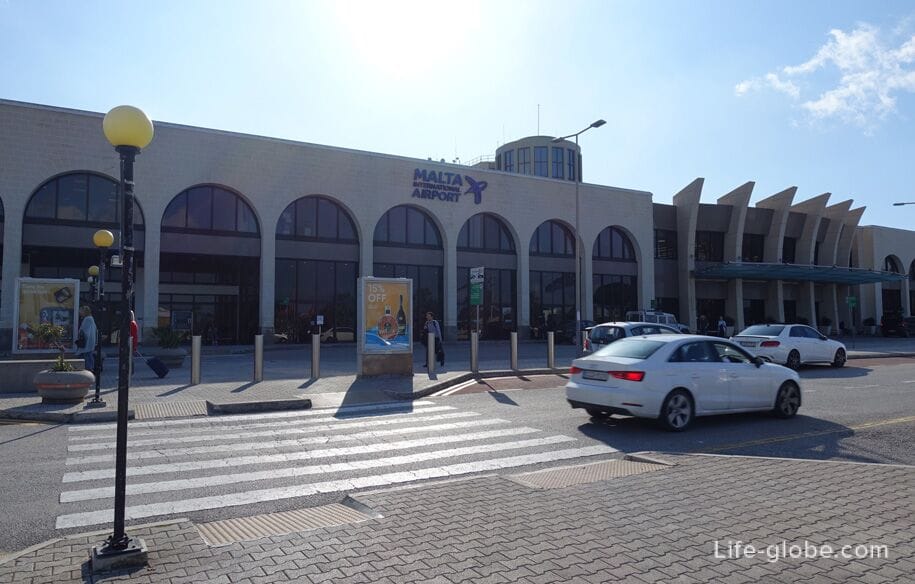 To get from Malta airport to many cities and resorts of the island of Malta is not difficult, the bus service around the island is well-developed. You can also reach any point of the island by taxi or rental car.

To get from the airport of Malta to the cities and resorts of the island of Malta is more convenient and faster by taxi. You can book a taxi/transfer in advance, even from home. At any time of the day at the airport you will be waiting for the driver with a sign where your name will be written. To order a taxi is enough to inform your flight details! Find out the cost and order a taxi here...

If you plan to travel around Malta, then car rental will be an ideal option. You can choose and order a car in advance, at the appointed time your car will be waiting for you near the airport. You can pick up and order a car here...

From public transport only buses. There is also a night route.

Bus stops are located near the exit from the airport building. We leave the airport (arrival area), cross the road and then, in a row, there will be bus stops. Near each stop there is an information plate, which indicates the routes followed by buses and timetables. 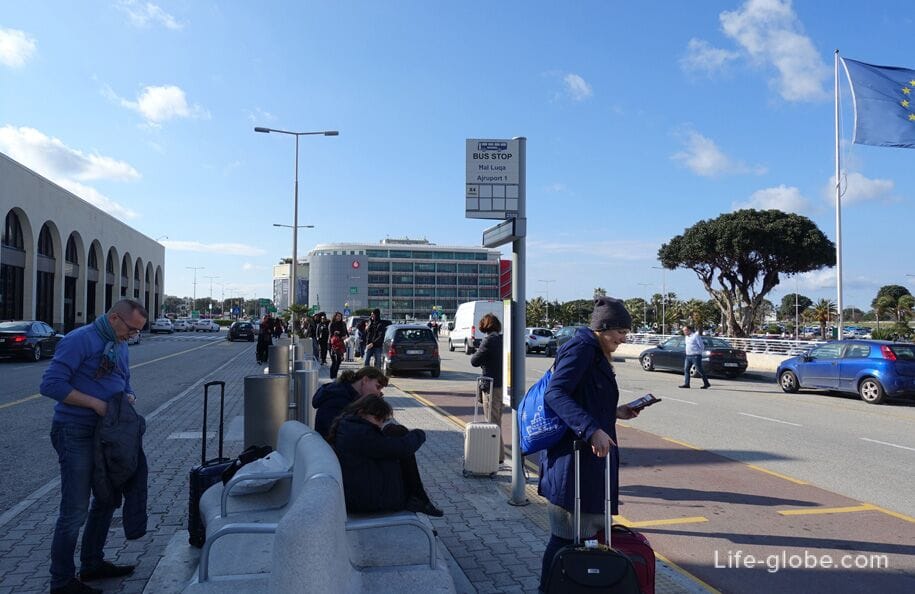 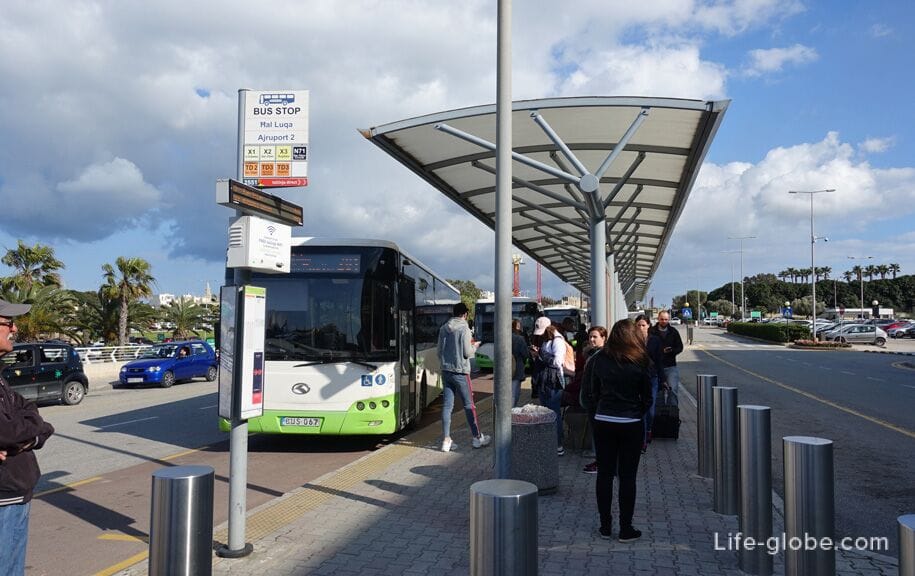 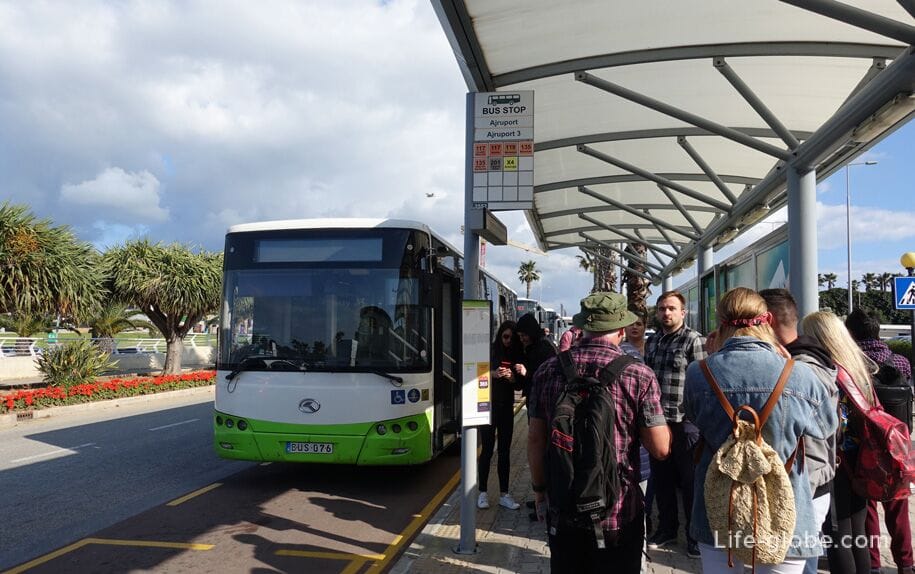 Numbers and routes of buses from/in the airport of Malta

Valletta and Birzebbuga bus X4, the first stop. The bus passes Floriana. Also, bus X4 from the airport goes to Birzebbuga to Pretty Bay beach but from the third stop.

Mellieha (ferry - Cirkewwa Ferry Terminal) - the bus is X1, the second stop. Passing: St Julian's, but, in contrast to the X2 bus, does not pass near the coast; marine Park Mediterraneo (Mediterraneo Marine Park). Bus Х1В follows from on Mellieha to the airport from Monday to Friday at 06:40 am.

Marsaxlokk and Marsascala bus 119, the third stop. Passing The Birzebbuga.

Bus № 135 from the third stop should Marsascala and Zejtun. Also runs to the University of Malta (L-Università ta' Malta) through Msida.

Night buses the airport N71, next to St Julian's, through Mcaba, Marsa and Msida.

Fare and purchase of tickets

Cost of single ticket for buses, Malta is: 1,50 Euros in winter and EUR 2 in summer (from mid-June to mid-October). The ticket grants the right to reach any destination within two hours, including changes.

Tickets can be purchased from the driver when boarding the bus.

Ticket for the night bus - 3 Euros.

There are bus maps of the Islands of Malta and Gozo:

- ExplorePlus card, entitling: 7 days unlimited use of buses, 2 trips on the ferries in Valletta, a day tour on the tour bus with visiting of sights of Malta or a boat trip to Comino, Blue lagoon house. The card is valid for 7 days from the date of the first confirmation. Cost 39 Euros.

Cards can be purchased at points of sale and services, including those located in the airport building: a bookstore in the departures hall (Agenda Bookshop, Departures Hall) and WHS Express in the arrivals hall.

Attention! Bus routes, cost and terms of passages may vary, please check before you travel.

Find out all the necessary information about the public buses in Malta (routes, timetable, ticket prices and maps, terms of purchase, etc.) on the official website Malta Public Transport. 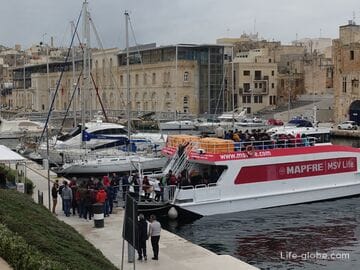 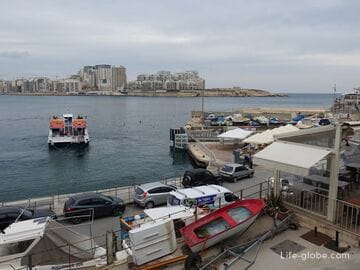 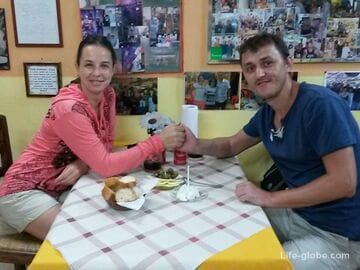