The church is also known as the Pushkin Church.

In the basement of the church there is a museum of the history of the fortification"Strongholds of Ingria".

The Pushkin Church historically did not belong to the Church of Ingria, but it occupies an important place in the modern history of the Evangelical Lutheran Church as the first Lutheran parish of Tsarskoye Selo, opened on the territory whose original name is Ingria (Ingermanland), and the official name is the Leningrad Region (including St. Petersburg).

The official name of the parish is the local religious organization "Finnish Evangelical Lutheran Parish of the city of Pushkin".

The church is now functioning; divine services, including musical ones, are held within its walls.

The church is made in the Neo-Gothic style. It is stretched deep into the plot and has brickwork, buttresses and pointed arches. The roof of the church is gable, pointed, hipped, and topped with a high Gothic spire with a four-pointed cross.

It is a three-nave basilica with an altar apse and choirs. 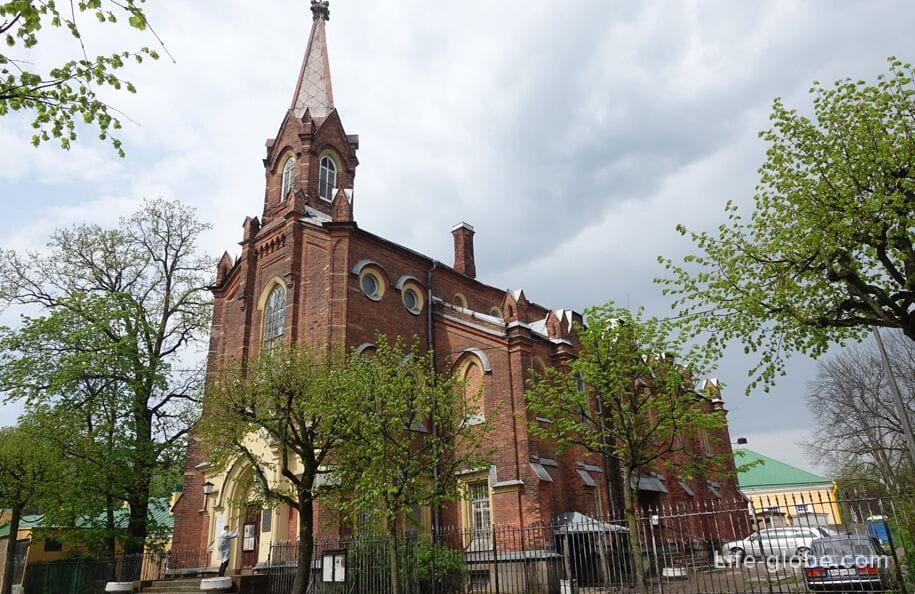 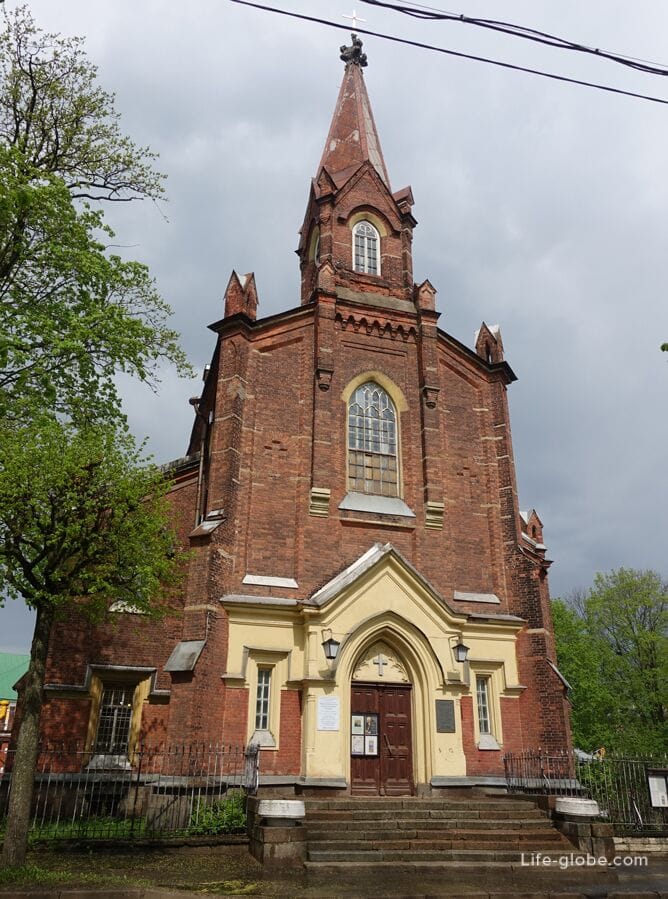 The church is located on the bank of the Lower Cascade Pond, which makes it look even more impressive. 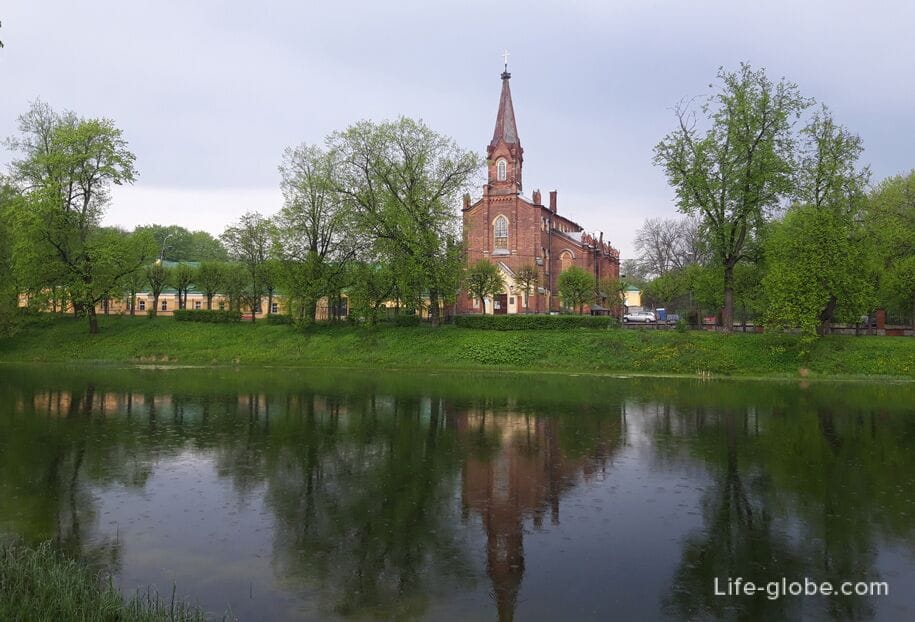 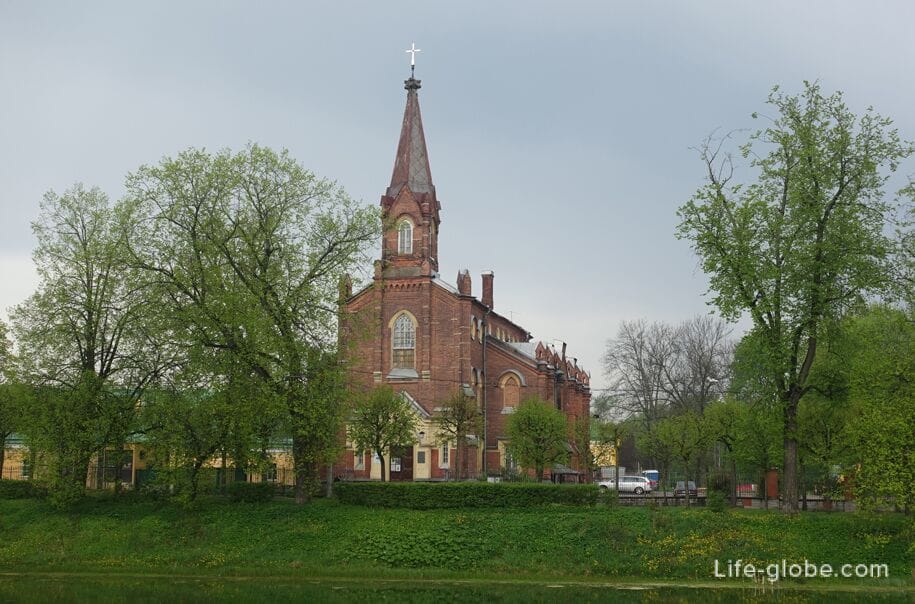 The interior of the church is made simply and in bright colors.

An organ is installed in the church. Musical evenings are held. 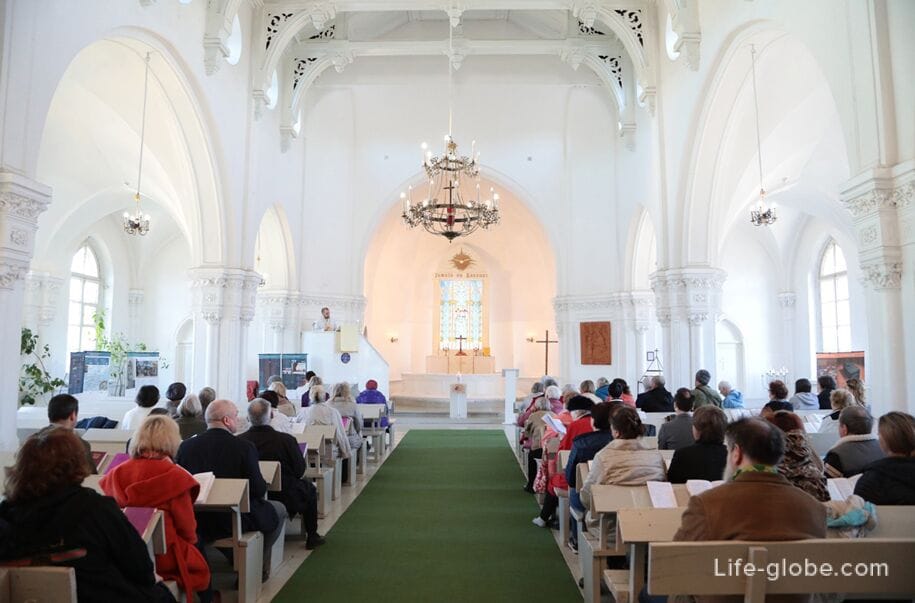 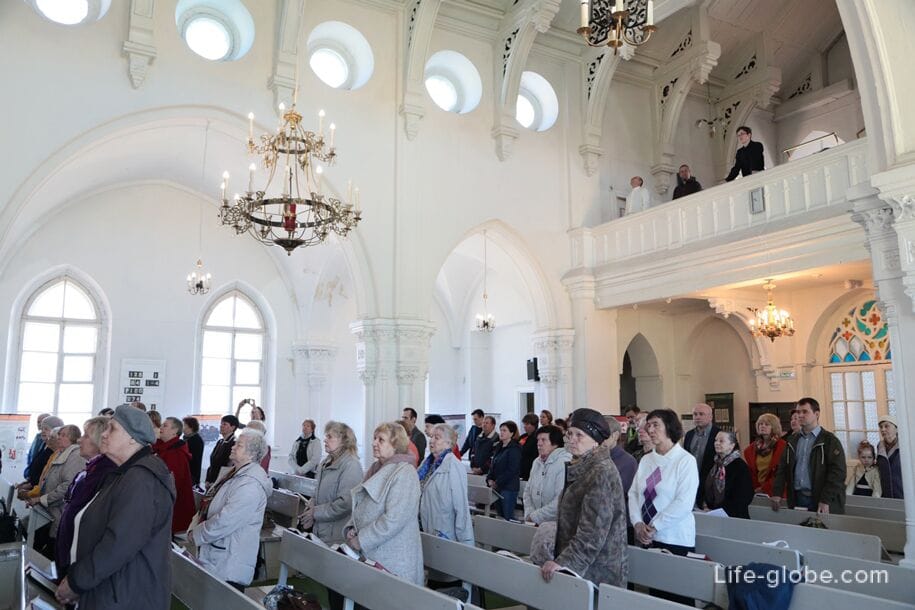 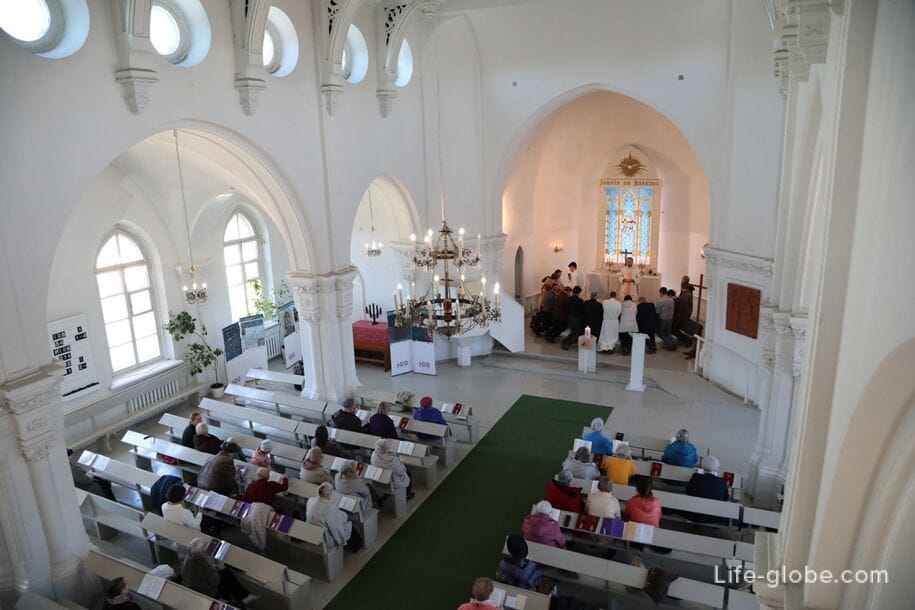 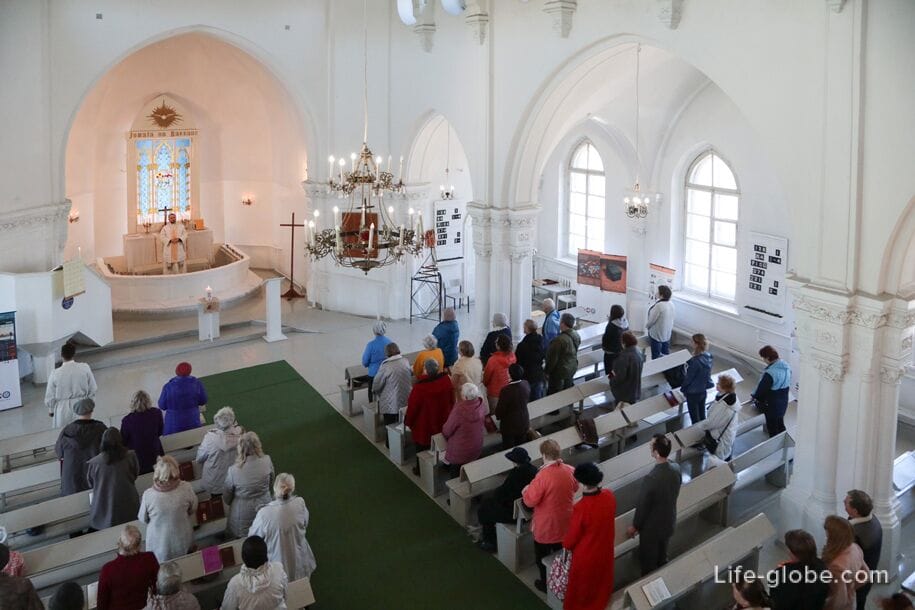 Museum of the History of fortification "Strongholds of Ingria"

The museum is located in the basement of the Lutheran Church of the Resurrection of Christ.

The museum "Strongholds of Ingria" tells about the fortifications located on the territory of Ingermanland.

Almost all the exhibits can be touched and viewed from all sides, and some of them can be tested in practice. Some of the exhibits are quite rare. For example, the bolt from the German MG-131 aviation machine gun is in good condition.

On the walls of the second hall there are photos of fortifications made on the Karelian Isthmus. As well as maps of the main lines of defense, drawings of pillboxes and historical reference material. 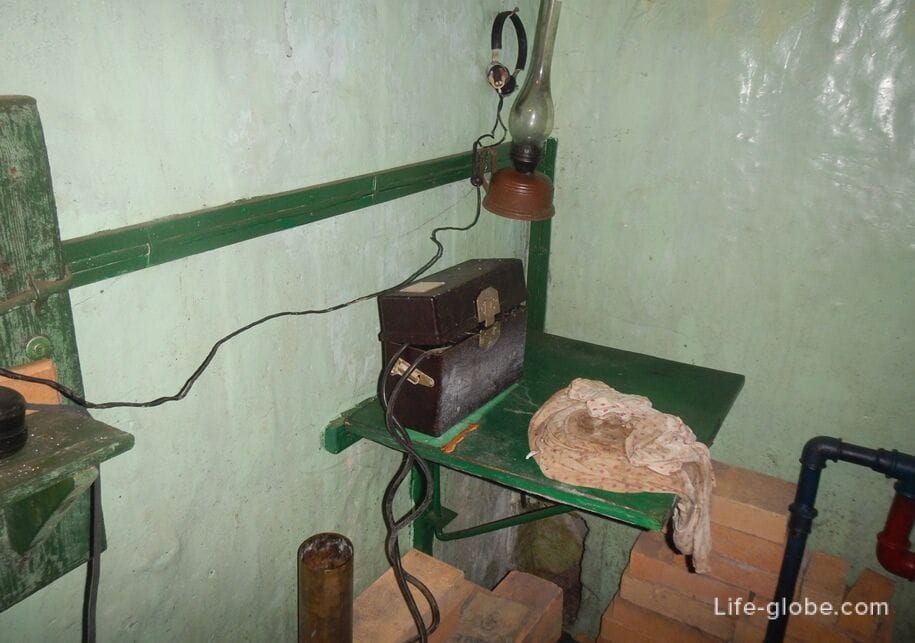 History of the Church of the Resurrection of Christ

The Lutheran community in Tsarskoye Selo was formed in 1811, when it was openedThe Imperial Lyceum, which had teachers, employees and pupils of the Lutheran faith.

The first wooden church in the Empire style was founded in 1818 and consecrated in October of the same year.

On August 14, 1860, a new stone church of the same name was laid next to the dilapidated building by that time, designed by architect Alexander Fomich Vidov.

Later, Emperor Alexander II allocated money for the completion of the construction of the church.

On April 17 (29), 1865, on the birthday of Alexander II, the church was consecrated and acquired the appearance in which it is now.

In September 1930, the lower floor of the church was transferred to the housing of workers of the Detskoselsky mechanical repair plant located nearby.

The church was closed by the decree of the Leningrad Executive Committee of December 5, 1931, and the building was transferred to a mechanical repair plant.

During the Great Patriotic War, the church was not damaged. After the end of the war, the building housed a driving school and an auto repair shop.

In 1977, the church was handed over to the Finnish Evangelical community and restoration work was carried out. The shrine was again consecrated in the name of the Resurrection of Christ.

On November 11, 1977, divine services in Finnish began in the church, and since 1988-in Russian and German. 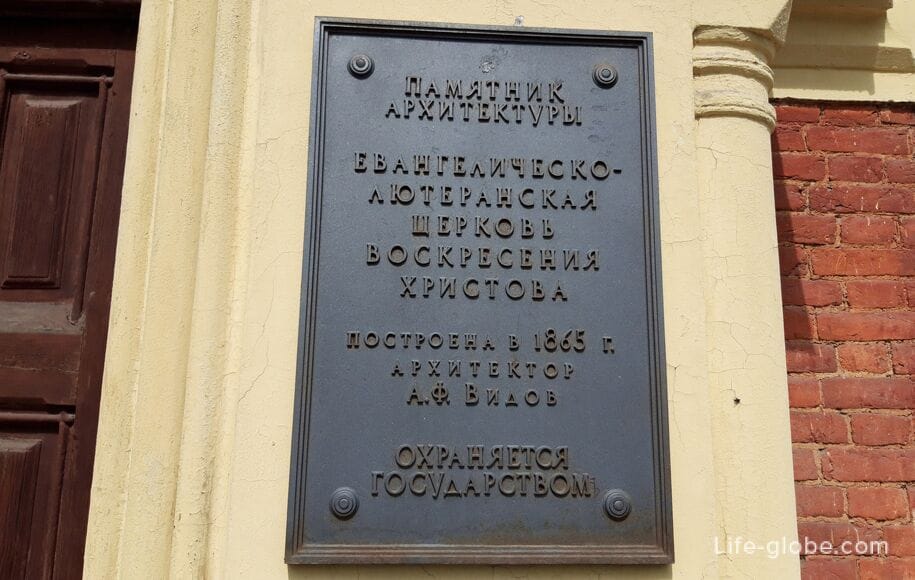 The Church of the Resurrection of Christ is located in the city of Pushkin, St. Petersburg, at the address: Embankment Street, house 4.

Website of the Church of the Resurrection of Christ: vk.com/pushkin_church.

Website of the museum "Strongholds of Ingria" in kirhi: vk.com/inkerifortress.

You can visit Tsarskoye Selo (Pushkin) with one of the excursions

You can find out about all the ways to get to Pushkin from St. Petersburg (the airport and the city center) here →

In Pushkin (Tsarskoye Selo) you can stay 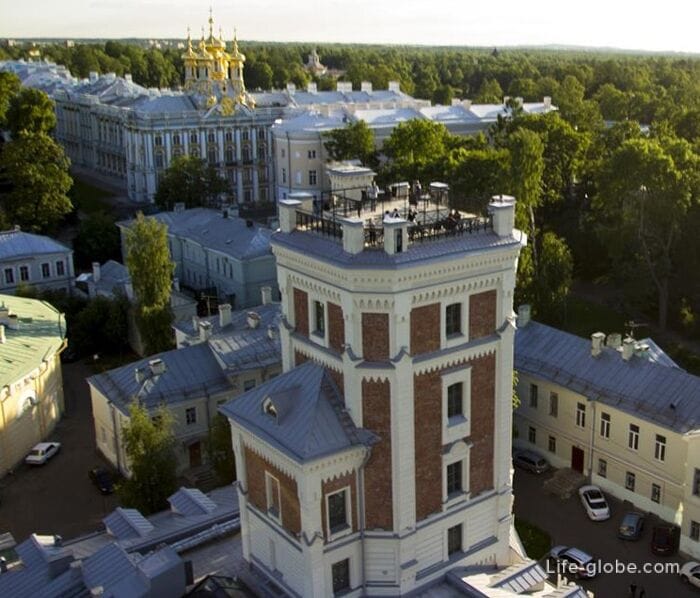 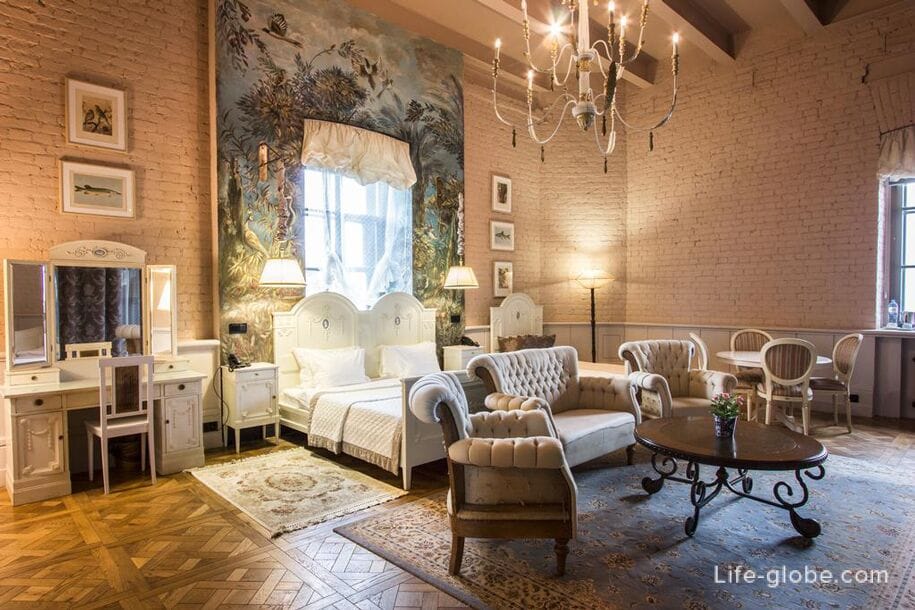 The hotelhas a spa center with a swimming pool, a hammam, a salt sauna, a snow fountain, steam baths and a gym; free Wi-Fi, a 24-hour front desk, 2 restaurants, a lobby bar, private parking and meeting and conference rooms.

The rooms are equipped with climate control, a mini-bar, a safe and a private bathroom. 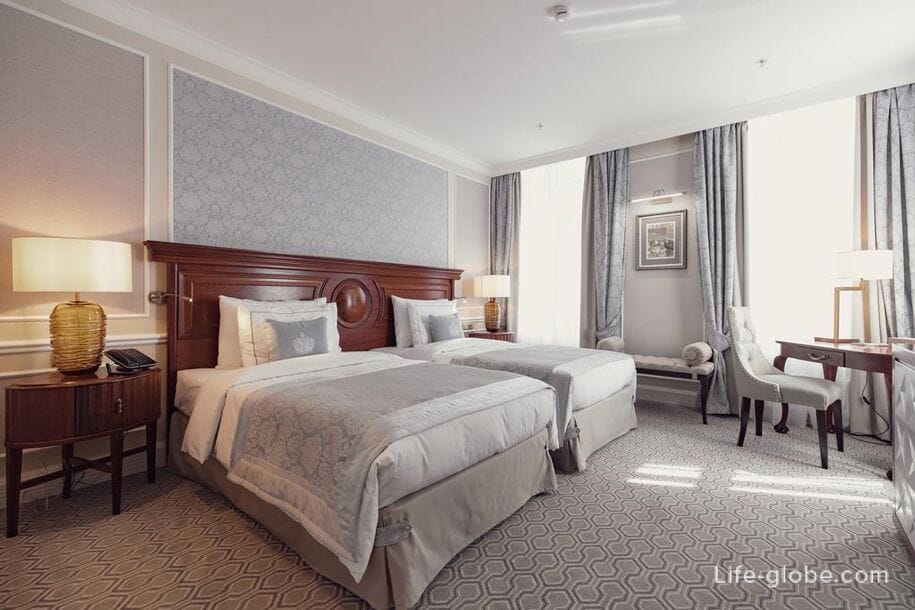 3-star hotel Ekaterina, located on the territory of the Catherine Palace and Park Ensemble.

The hotelhas a 24-hour front desk, a cafe, free Wi-Fi and parking.

The rooms are equipped with airconditioning, a TV, a work desk and free toiletries. 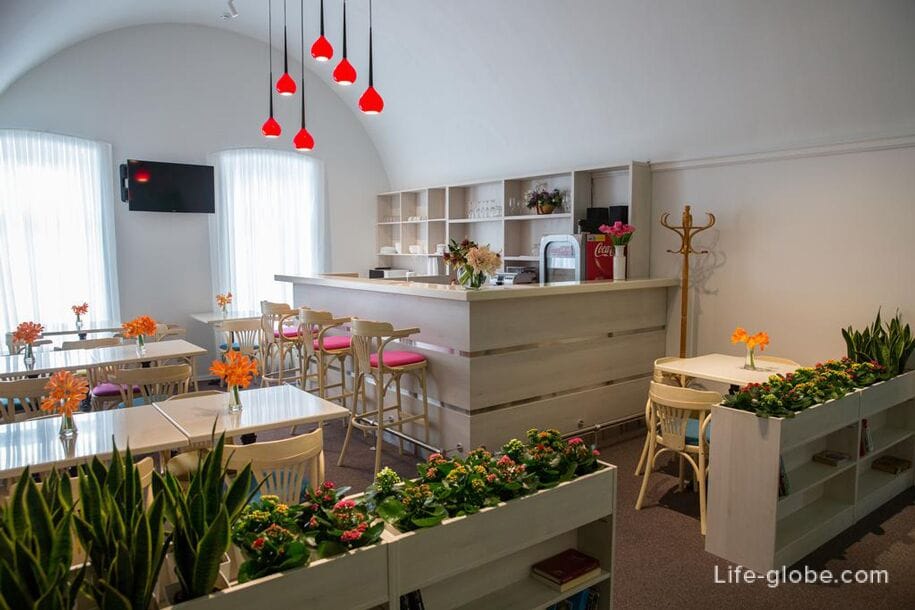 All accommodation facilities in St. Petersburg, including in the city center and in Pushkin, can be viewed and booked here 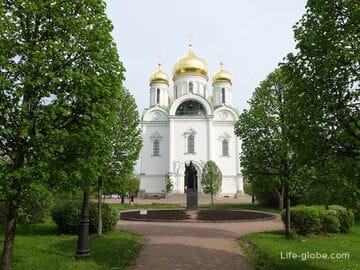 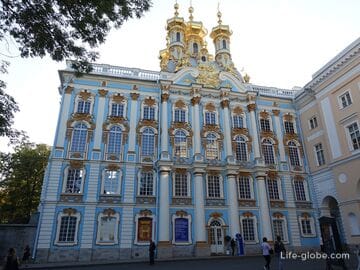 Church of the Catherine Palace, Tsarskoe... 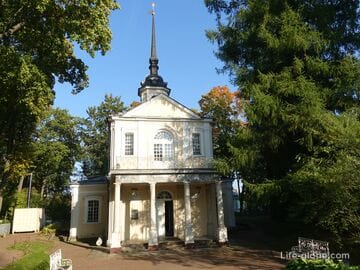