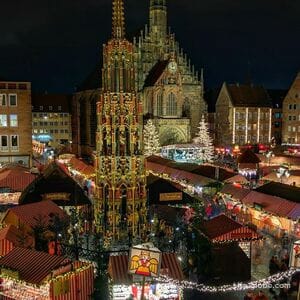 Nuremberg is a beautiful Bavarian city with a historical center with medieval features and an abundance of attractions.

The Nuremberg Christmas markets are considered one of the most beautiful and colorful in Europe. About 2 million people visit Nuremberg during the Christmas fairs.

There are stalls and tents at the fairs, from which they sell food, including local street food, famous gingerbread, drinks, the main place among which is occupied by warming mulled wine, Christmas products, as well as souvenirs, products of local craftsmen and festive paraphernalia.

In addition to tents at fairs, there are Christmas decorations that create a festive atmosphere: glowing garlands on the counters, decorated Christmas trees, colorful toys. And the audience is entertained with festive programs.

Thanks to all this, you can feel the approach of the main holidays of the year already a few weeks before the onset of such.

Christmas markets are located in the historical center of the city, where the main tourist life takes place. 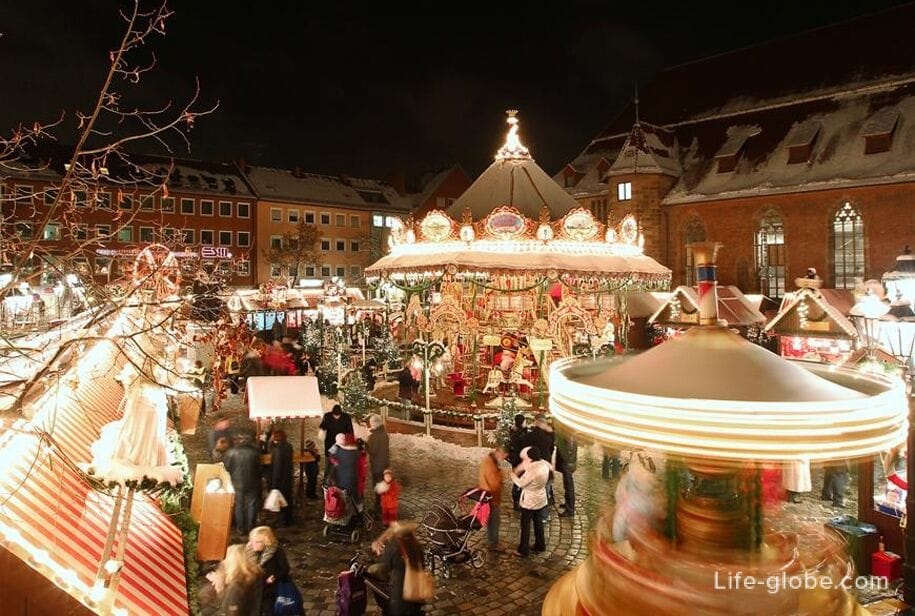 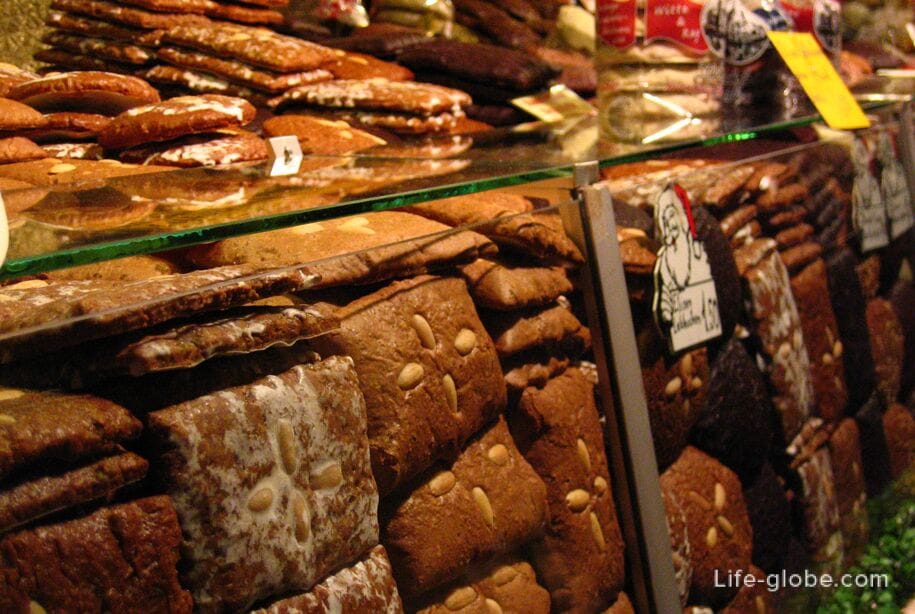 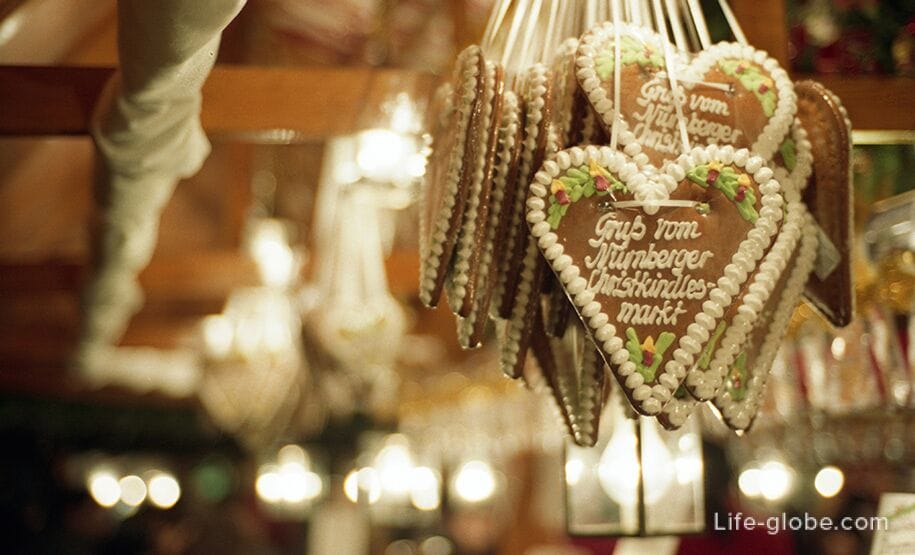 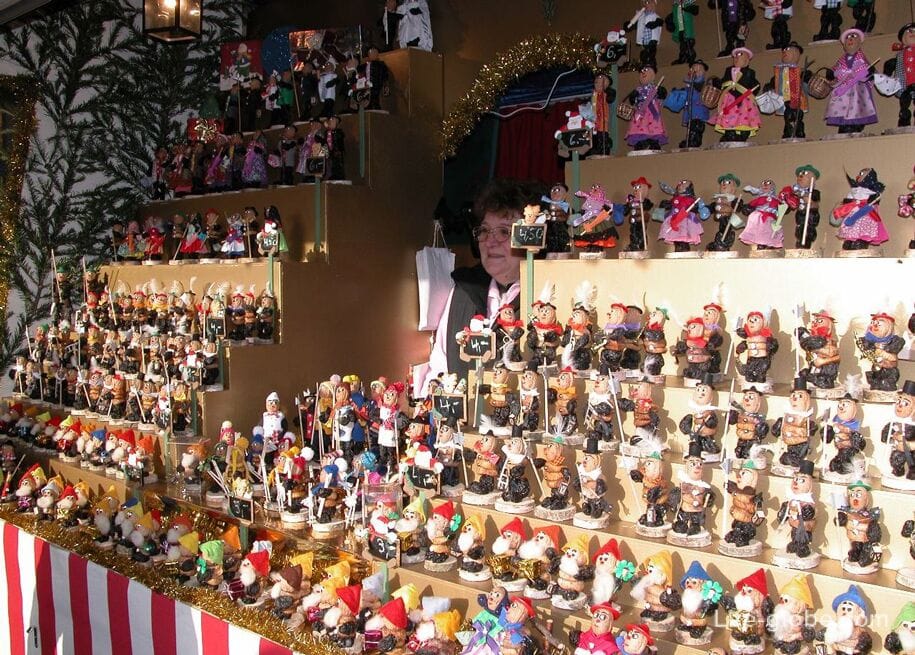 The Nuremberg Christmas Market was first mentioned in 1628; its roots probably go back to the time of Luther, when the tradition of giving gifts to children for Christmas arose.

The fair takes place in the central square of the old city of Nuremberg - Market Square (Hauptmarkt), near the Church of the Virgin Mary (Frauenkirche). The fair also captures nearby streets.

The fair begins on the Friday before the first Sunday of Advent and ends on December 24.

Today's Christkindlesmarkt market includes about 180 wooden kiosks, which are traditionally decorated with red-and-white striped fabric. Hence the nickname of the market "a small town made of wood and fabric". The kiosks offer traditional goods such as handmade Christmas decorations and culinary delicacies, the invariable of which are the original Nuremberg gingerbread and Nuremberg fried sausages.

A large Nativity scene is being installed in the center of the square. 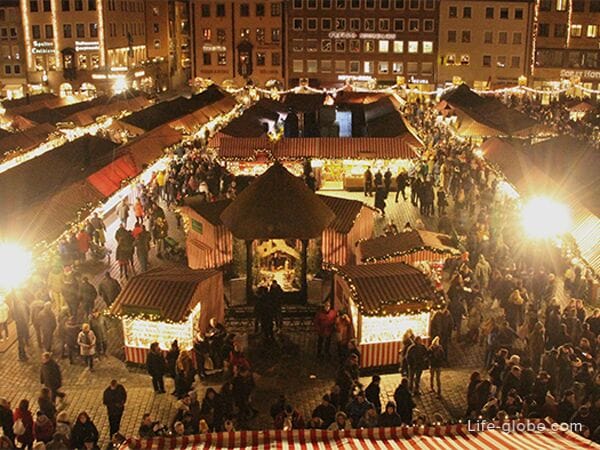 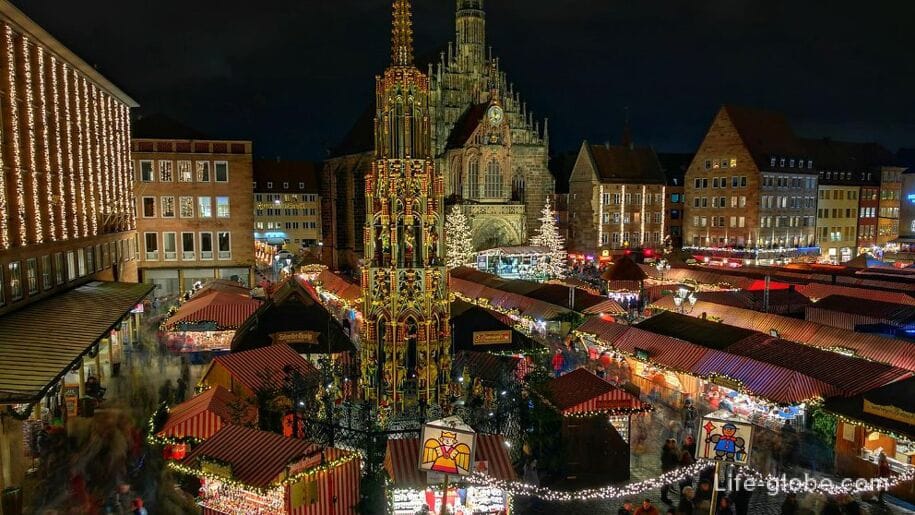 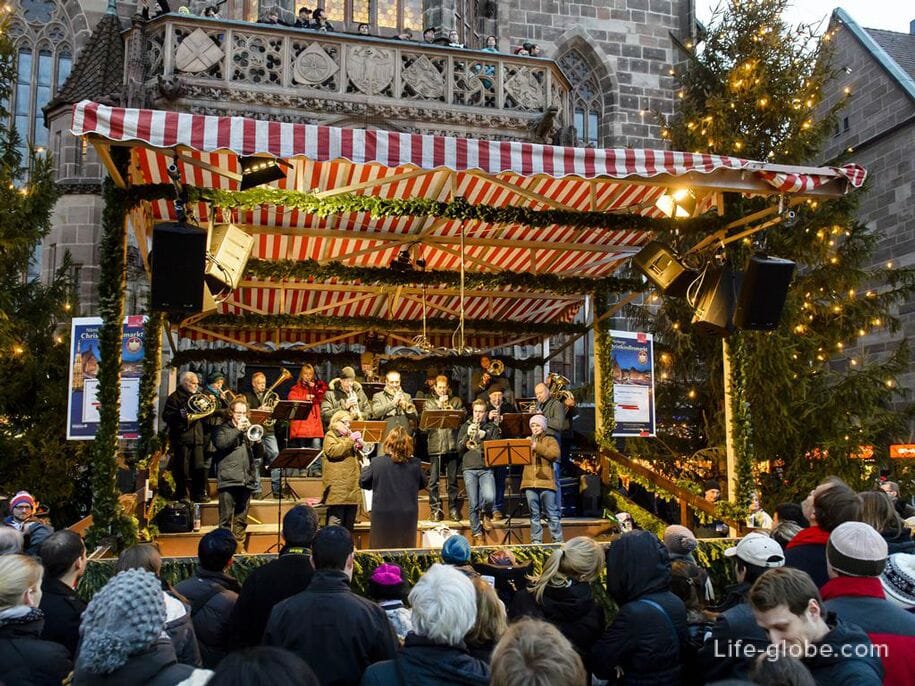 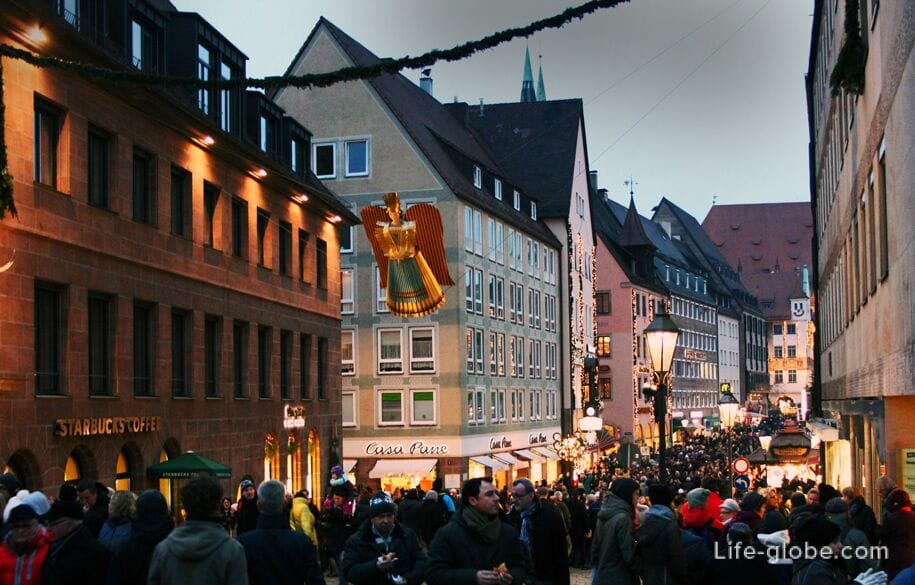 The most famous of the representatives of the Nuremberg Christmas Fair is the "Christ Child" (Nürnberger Christkindlesmarkt), who personifies the Christmas Angel.

A young local girl is chosen for the role of a baby, from all those who have applied. The girl is elected every two years, and this tradition has been going on since 1969.

The Christkindlesmarkt opens with the opening speech of the Christ Child from the balcony of the Frauenkirche church. According to tradition, the Christ girl is dressed in white and gold, with curly blond hair, a high golden crown and long golden sleeves, similar to angel wings. 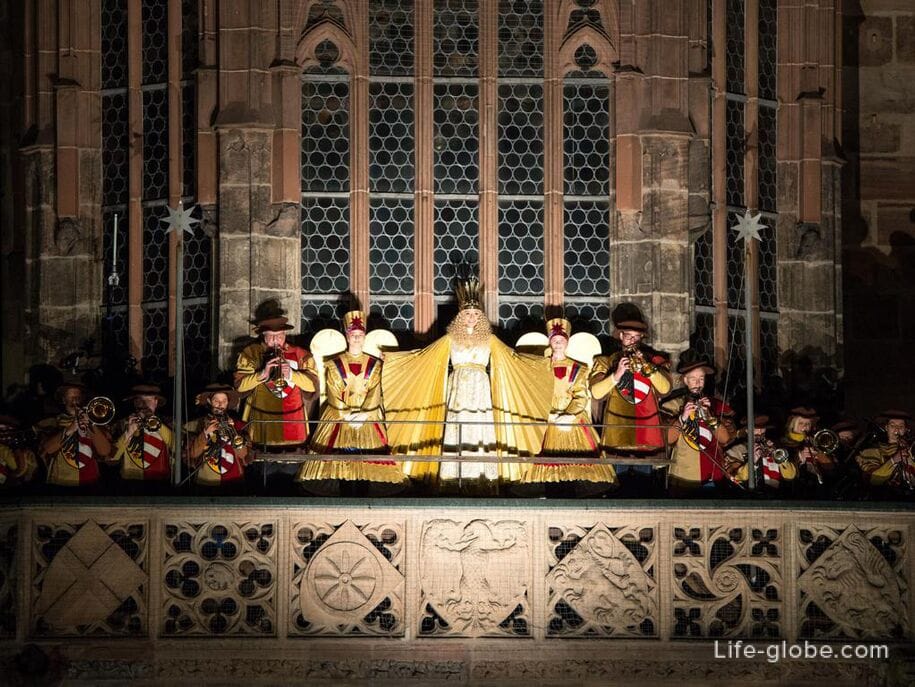 For the first time such a market was launched in Nuremberg in 1985.

This small market offers products from numerous partner cities and friendly regions of Nuremberg: from China and Europe, to South America and the United States of America. 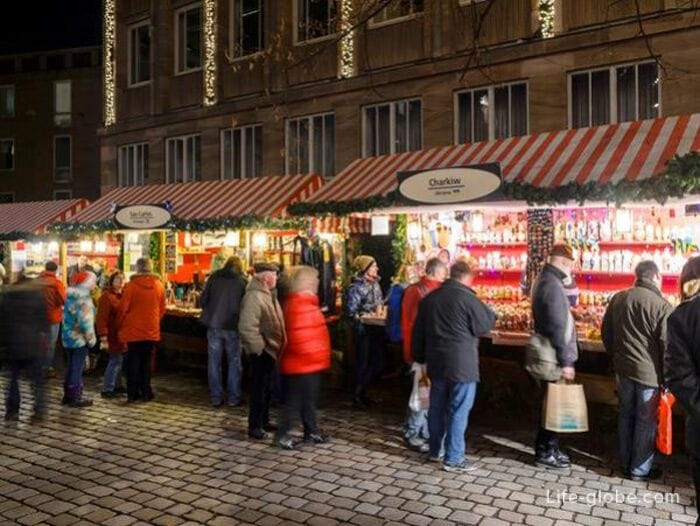 There are honey and beeswax products made by local beekeepers, homemade liqueurs and vintage brandies, as well as fruit pastes, branded sausages and much more. 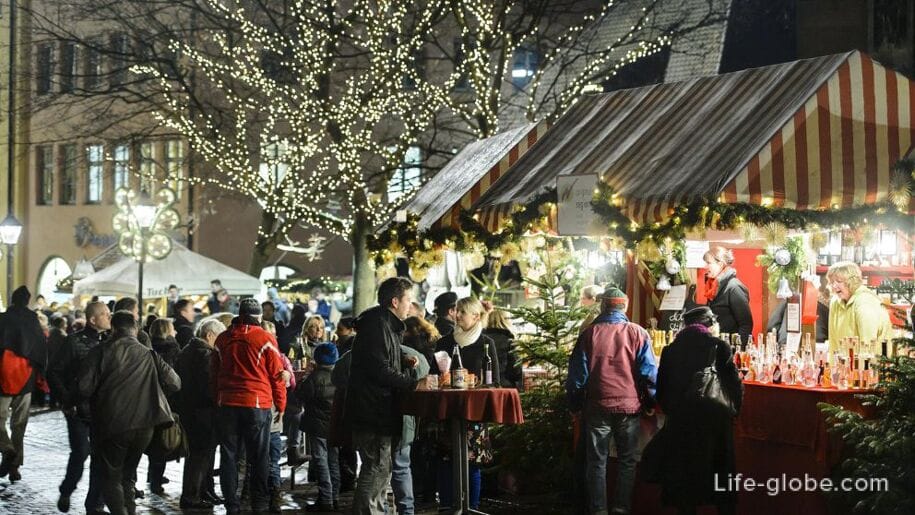 The Children's Christmas Market (Weihnachtsstadt für Kinder) operates Hans-Sachs-Platz and is aimed at families with children.

In the former Hospital of the Holy Spirit (Heilig-Geist-Spital) there is a "Star House" (Sternenhaus), where you can have fun and warm up.

There are also treats at the fair, including waffles, steamed noodles, Franconian potatoes and pancakes. 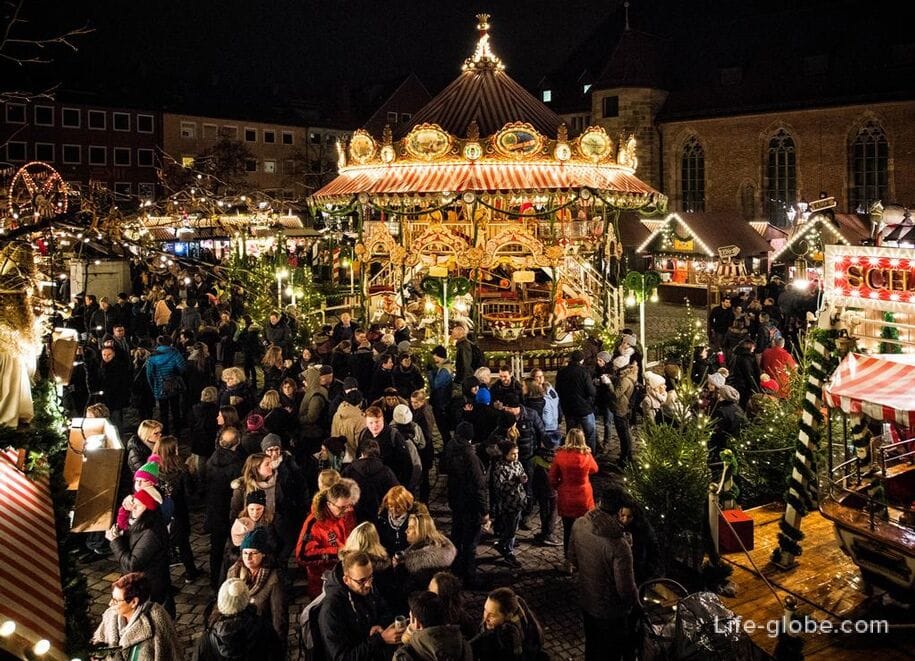 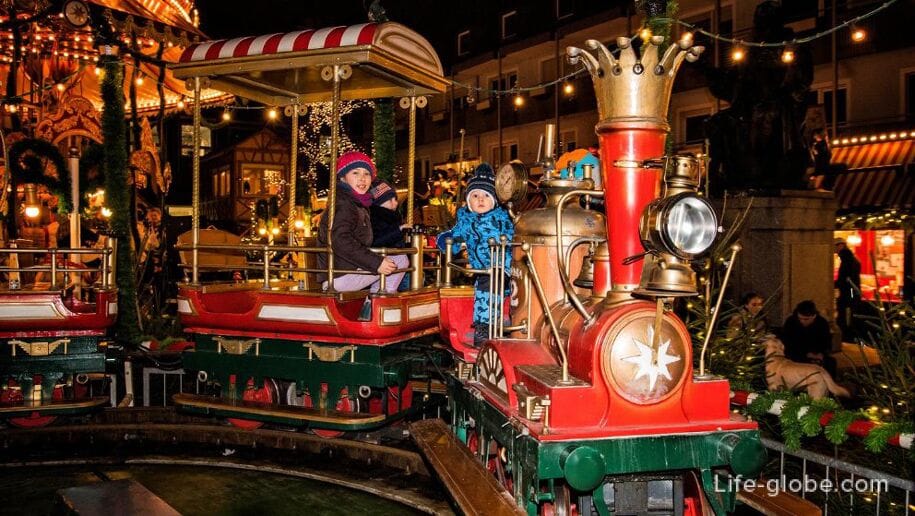 A small Feuerzangenbowle zum Christkindlesmarkt has been opened near the Pegnitz River, the name of which cannot be translated, but in the vocabulary it means "sausage and sauerkraut".

This is a place where drinks and food are sold, among which, of course, the famous mulled wine, sausages and cabbage.

The highlight of this place is a large vat, 3.40 meters high, accommodating an impressive 9,000 liters of warming drink.

Map-scheme of Christmas markets in the center of Nuremberg 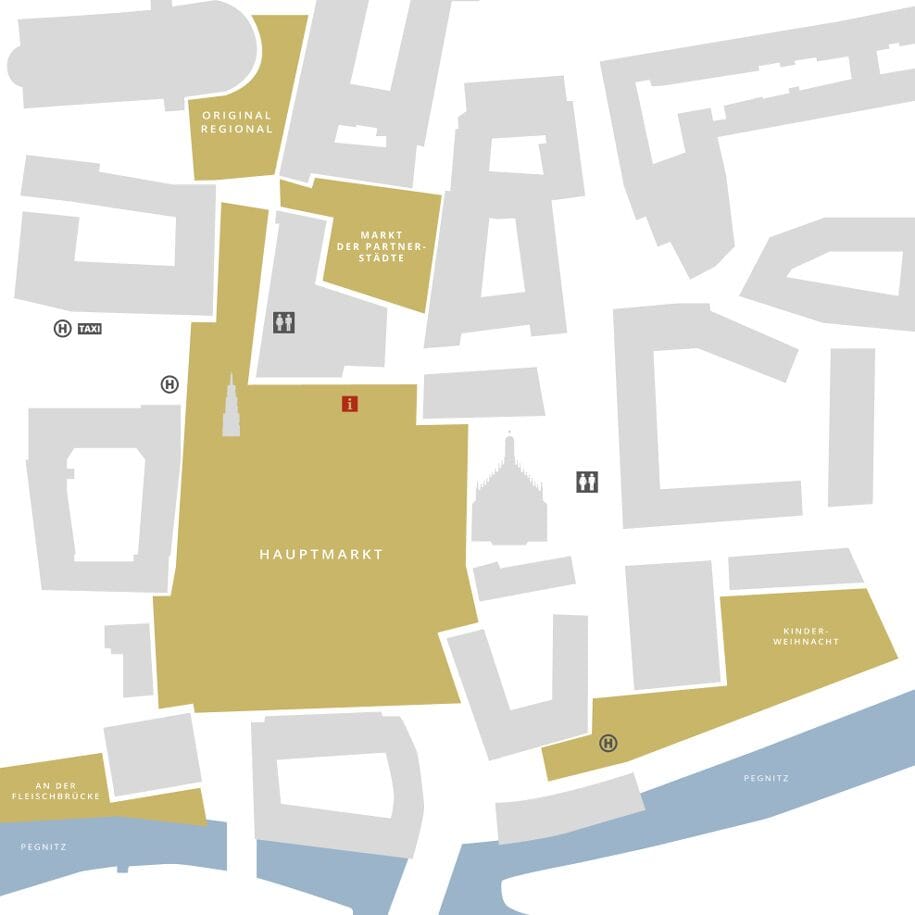 We recommend checking the dates and opening hours of Christmas fairs, as well as other information on the official website: christkindlesmarkt.

In addition to the Christmas fairs in the old town of Nuremberg, you can visit the colorfulThe artisans' yard (Handwerkerhof Nürnberg / Handwerkerhof).

The characteristic structures of the courtyard are small buildings with imitation half-timbered facades.

Craft and souvenir shops, shops, cafes and restaurants are located in the houses, which offer such specialties as: Nuremberg sausages, Franconian beer and specialty wines, Nuremberg gingerbread, as well as wooden and tin toys, local souvenirs and other goods, including handmade.

On Christmas Eve, the Craft Yard acquires a festive atmosphere. More about the Artisans' Yard… 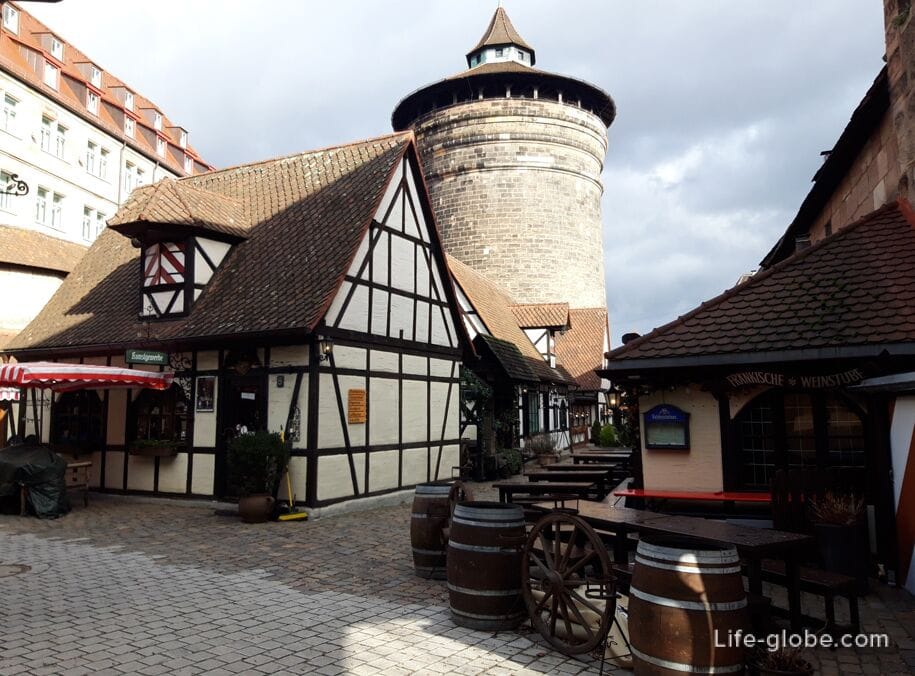 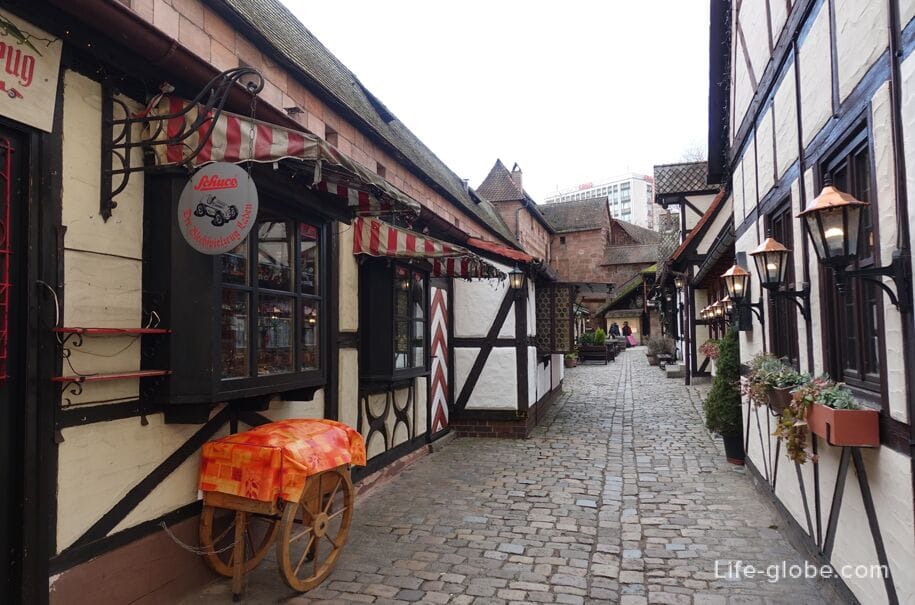 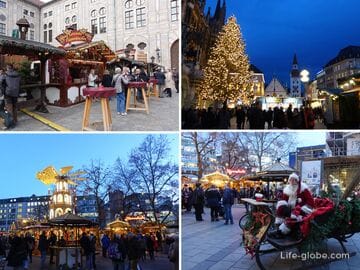 Christmas markets in Munich (Münchner We... 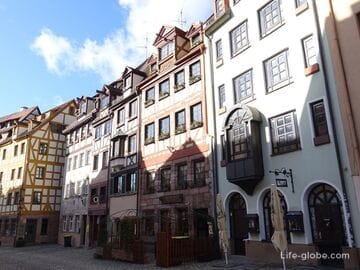 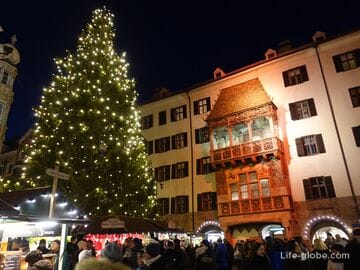