The Lion Bridge is one of the bridges in the center of St. Petersburg.

The bridge is an outstanding monument of bridge-building architecture of the first quarter of the 19th century and an object of cultural heritage of Russia of federal significance.

The Lion Bridge is one of the most beautiful, visited and photographed bridges in St. Petersburg.

Such popularity is given to the bridge by the fact that it is completely pedestrian, chain hanging and decorated with sculptures of large white lions, thanks to which the bridge was named "Lion". 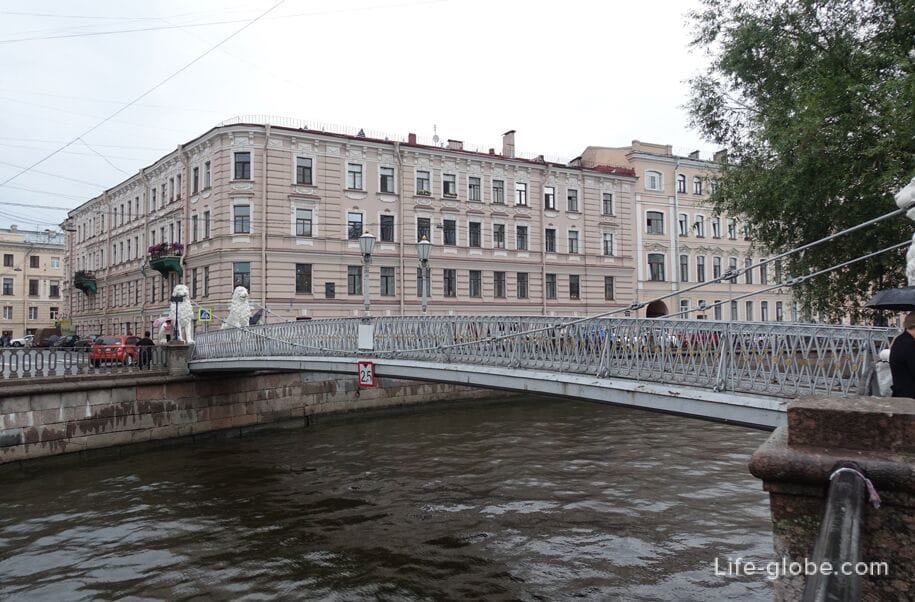 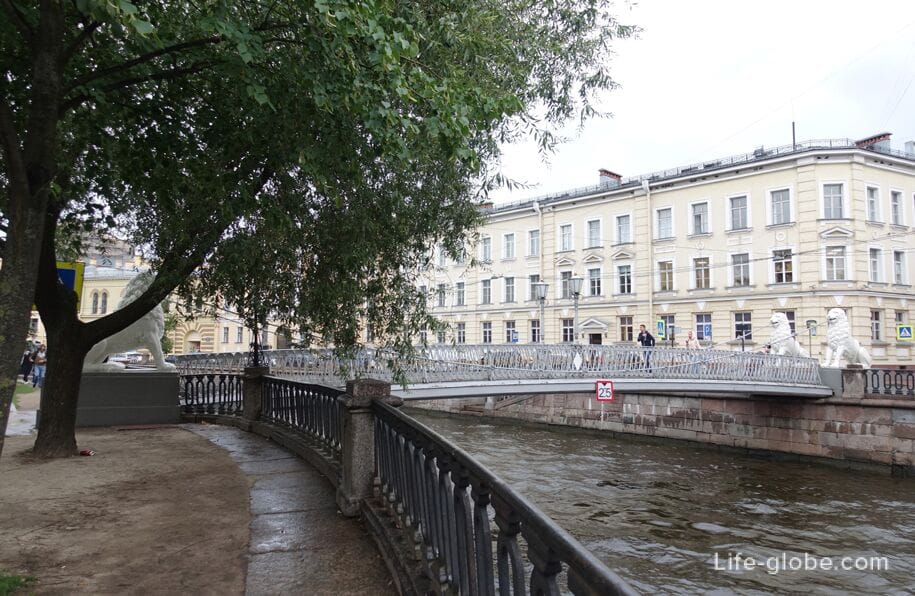 The Lion Bridge is one of the three surviving pedestrian chain bridges in St. Petersburg (along with Bank with sculptures of griffins and Pochtamtsky Bridge.

The Lion Bridge spans the Griboyedov Canal in the alignment of the Lion Lane and Malaya Podyachesky Street, and connects the Kazan and Spassky Islands.

The Lion Bridge is completely pedestrian (hanging chain); has a total length of 27.3 meters and a width of 2.9 meters.

The bridge is a single-span hanging girder. The superstructure consists of chains that play a decorative role, suspensions and metal beams welded together. The ends of the chains are pivotally attached to cast-iron pylons inside the lion's head sculptures, fixed to the supports with anchor bolts. The pylons are hidden inside decorative sculptures - lions and metal pedestals.

The bridge fabric is made in the form of a wooden flooring.

The railings of the bridge are high, cast-iron artistic casting with a pattern representing a grid of crossed rectangular rods, the ends of which are connected at the top and bottom by semicircular sockets.

In the middle of the bridge, two octagonal lanterns on cast-iron floor lamps are mounted in the railing. 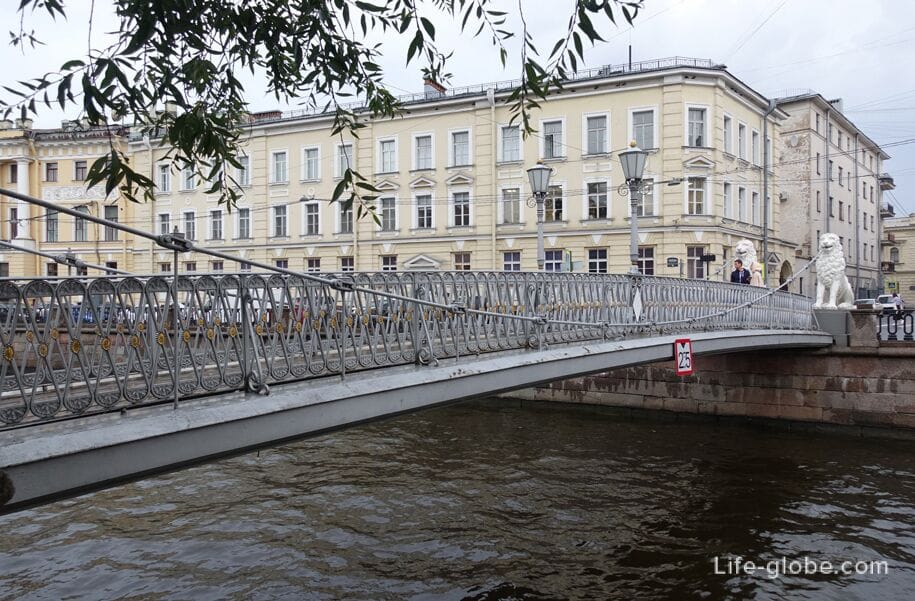 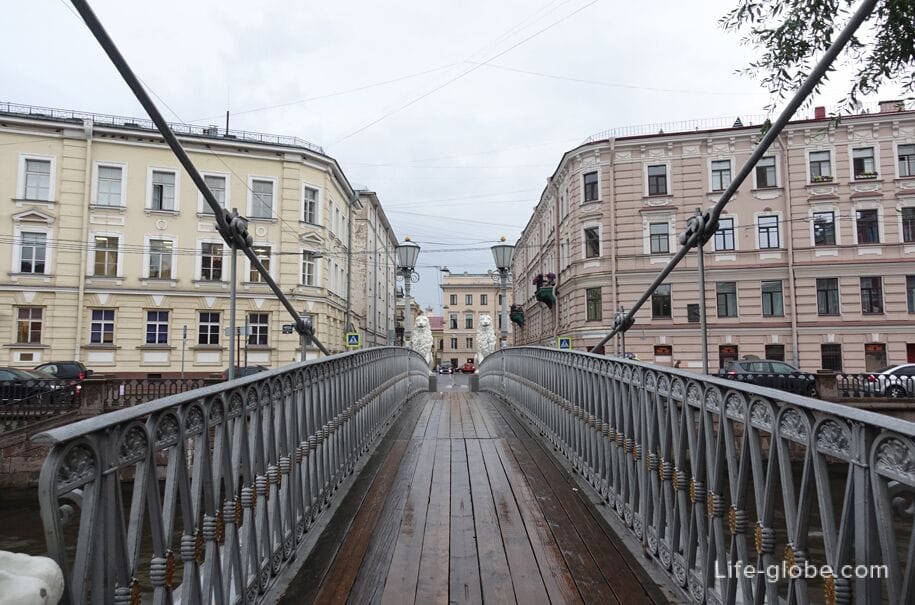 The sculptures of the lions were made by academician-sculptor Pavel Petrovich Sokolov and cast from cast iron at the Alexander Iron Foundry, painted with white matte paint with the effect of marble. 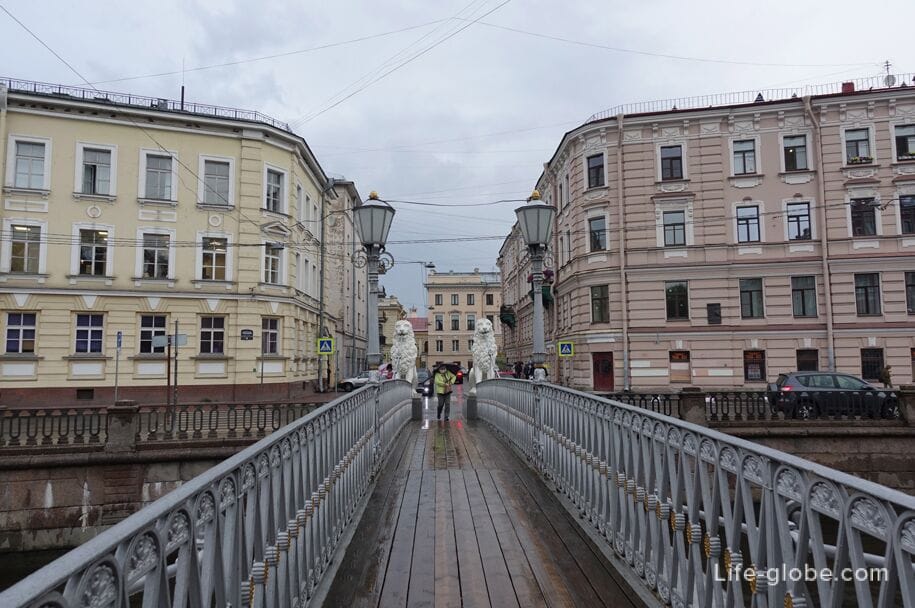 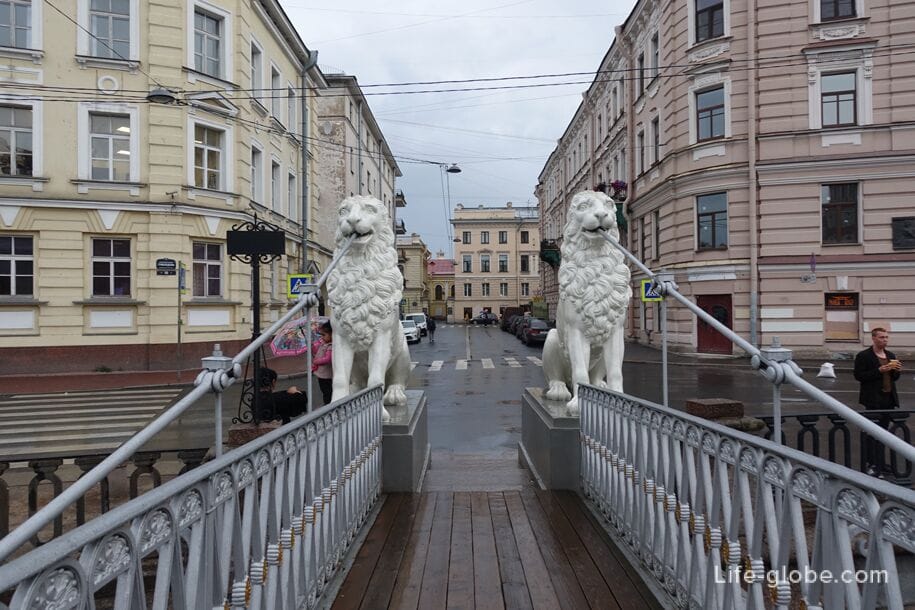 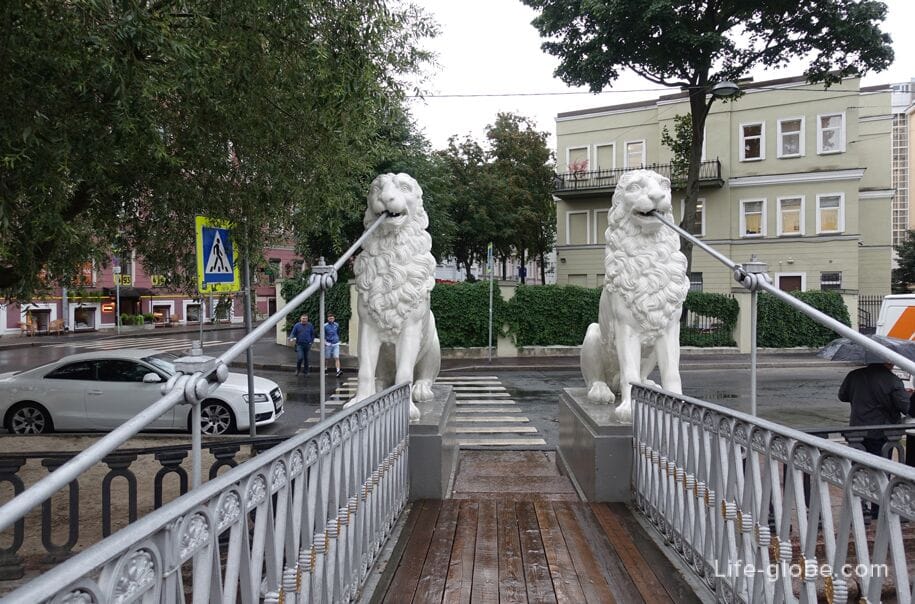 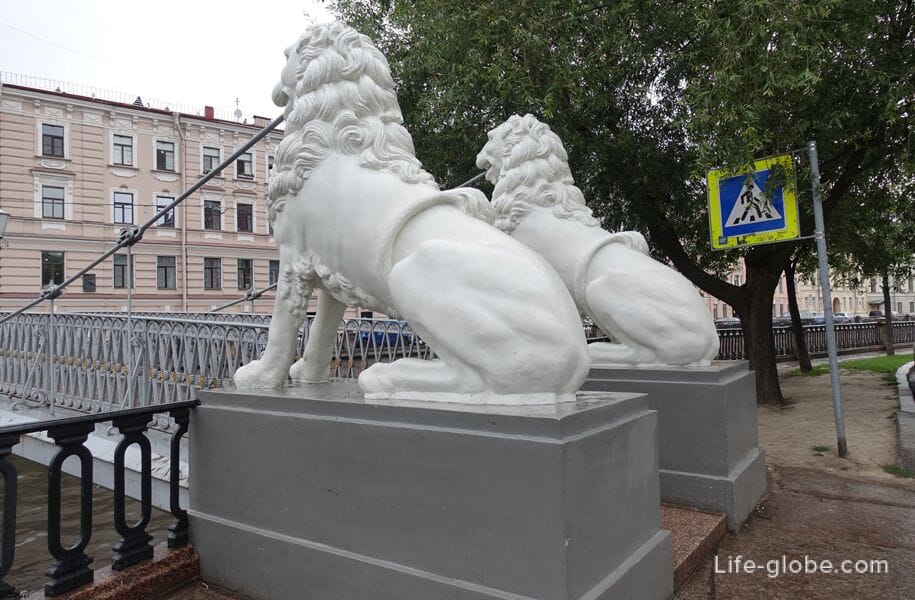 From the Lion Bridge there are views of the Griboyedov Canal and the embankments of the canal, including the Museum of Art of St. Petersburg of the XX-XXI centuries.

View from the Lion Bridge downstream of the Griboyedov Canal 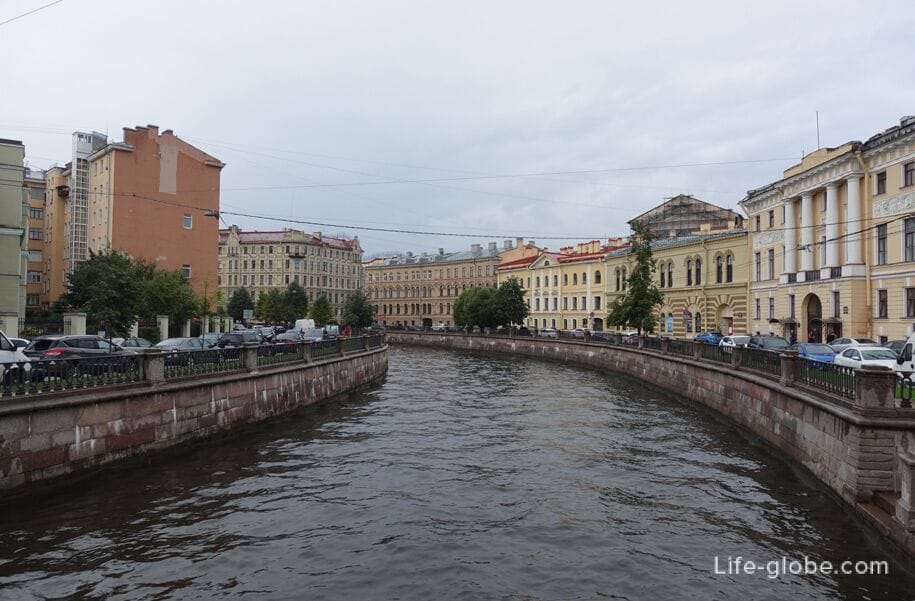 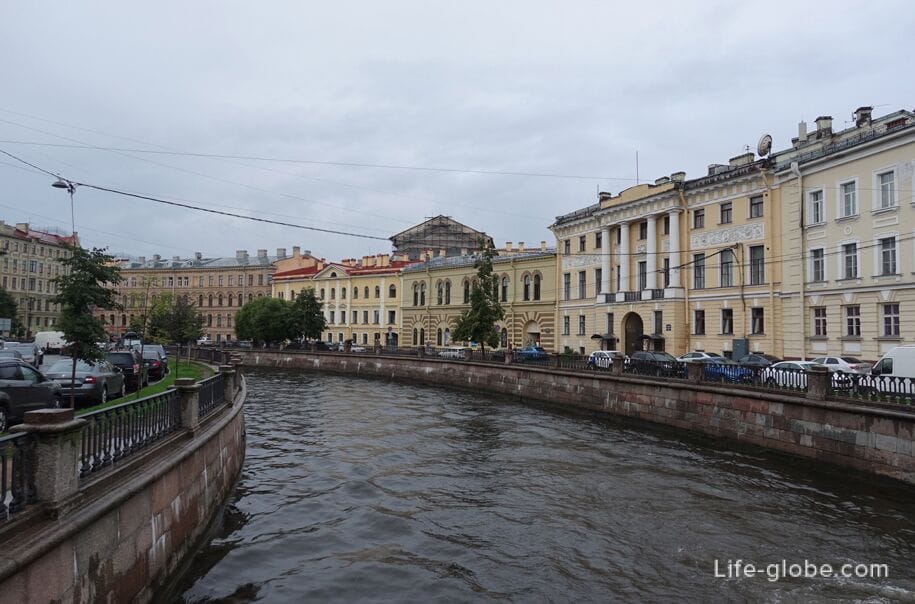 View from the Lion Bridge upstream of the Griboyedov Canal 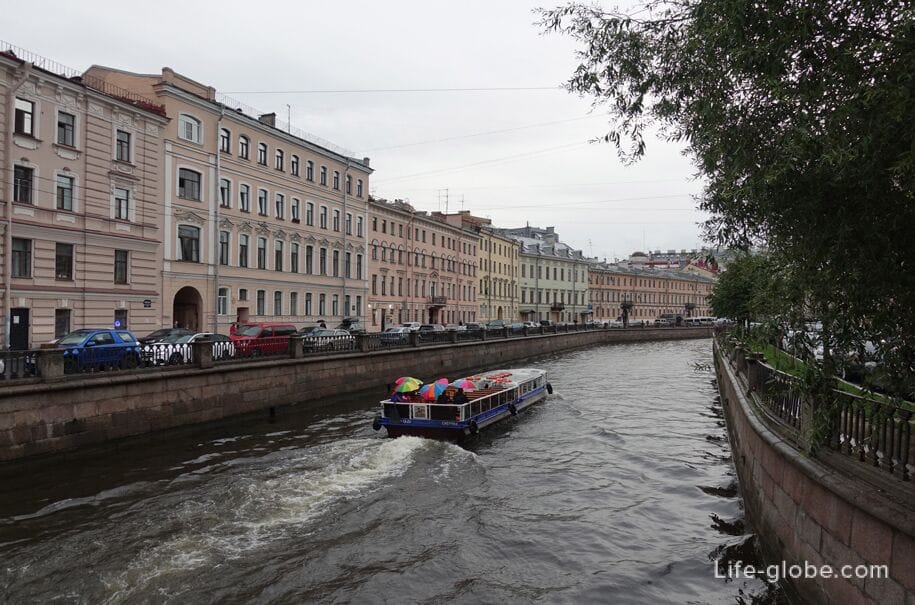 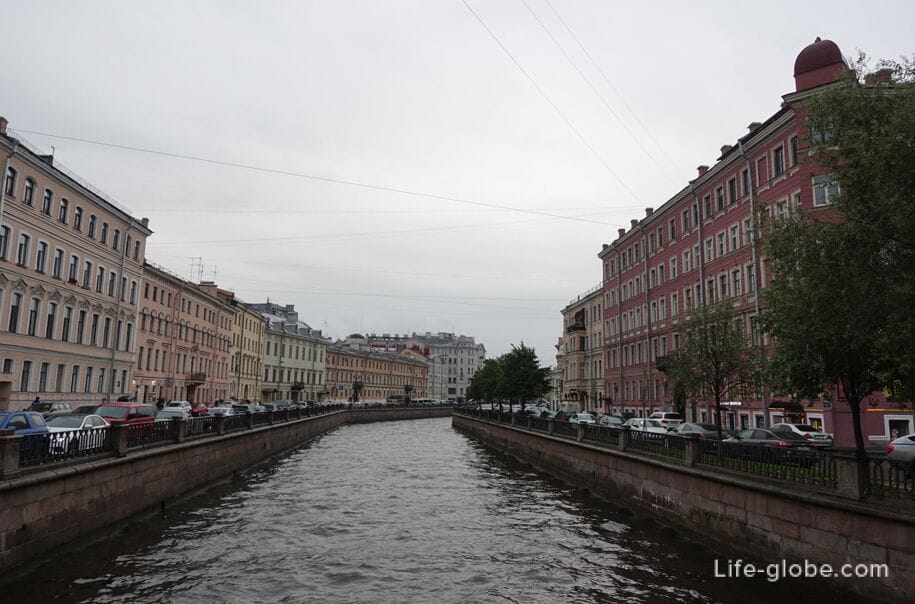 and the guest house At the Lion Bridge

The history of the Lion Bridge

The Lion Bridge was built in 1825-1826 according to the designs of engineers G.M. Tretter and V.A. Khristianovich.

In 1880, the original cast-iron fences were removed from the bridge and replaced with a metal wrought-iron lattice of a simple pattern, and the lanterns were also modified.

In 1948, according to the project of engineer O.M. Yanovsky, the bridge was overhauled: wooden beams were replaced with metal ones.

In 1954, according to the project of architect A.L. Rotach, the primary grilles and lanterns of the bridge were restored.

Subsequently, repair and restoration work of the bridge was carried out.

In 1838, the Borsig company, designed by the German architect Ludwig Hesse, erected a reduced copy of the Lion Bridge in Berlin's Tiergarten Park with a length of 17.3 meters and a width of 2 meters.

A replica bridge in Berlin (Germany) became the first hanging ferry in the German capital.

Upstream of the Griboyedov Canal from the Lion Bridge is the Podyachesky Bridge, below - Kharlamov Bridge. 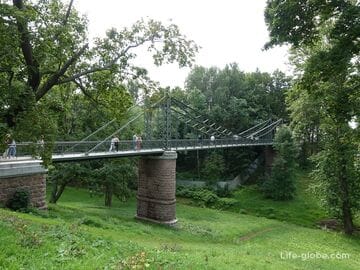 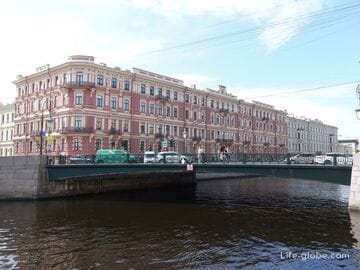 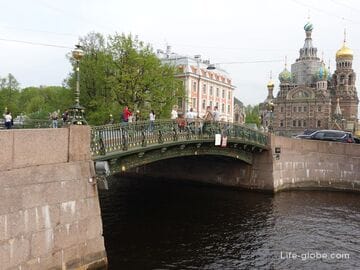