A small seaside resort town of Sestri Levante is situated between the Ligurian sea of the Italian Riviera (Riviera di Levante) and ridge is characterized by two bays: the Bay of Silence and Bay of the fairy Tales, separated by isthmus which connects a rocky promontory with the mainland.

It is in these two bays, the beaches of Sestri Levante.

The beach of the Bay of Silence

The Bay of Silence (Baia delle Favole) - a small of the two bays, located in the Eastern part of the coast of Sestri Levante.

In the center of the bay of Silence is the beach, on both sides surrounded by a rocky wild coast.

This beach is the most picturesque beach not only of Sestri Levante, but also of the entire coast of the Riviera di Levante.

Beach in the Bay of Silence is a narrow sandy, sometimes sandy-pebbly band, with one side separated from the main part of the city in a tight row of colorful buildings, a typical Ligurian style, and the waters of the Ligurian sea.

During a high season on the beach it is populous. Sea water differs in shallow water that promotes its fast set of temperature.

On the beach there is all the necessary infrastructure: sun loungers and umbrellas (the average cost of a sun lounger is 6 Euros, an umbrella from the sun - 7 Euros), decking for ease of movement, showers and urns, there are several cafes, rescue points and first aid. You can find a place and get on your own towel.

The beach is equipped for people with reduced mobility. Read more about the Bay of Silence and the beach... 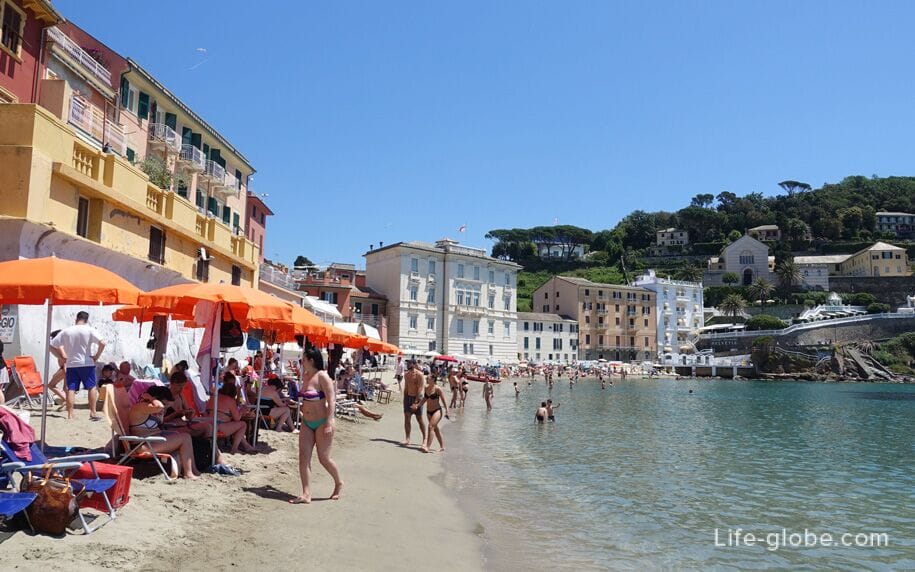 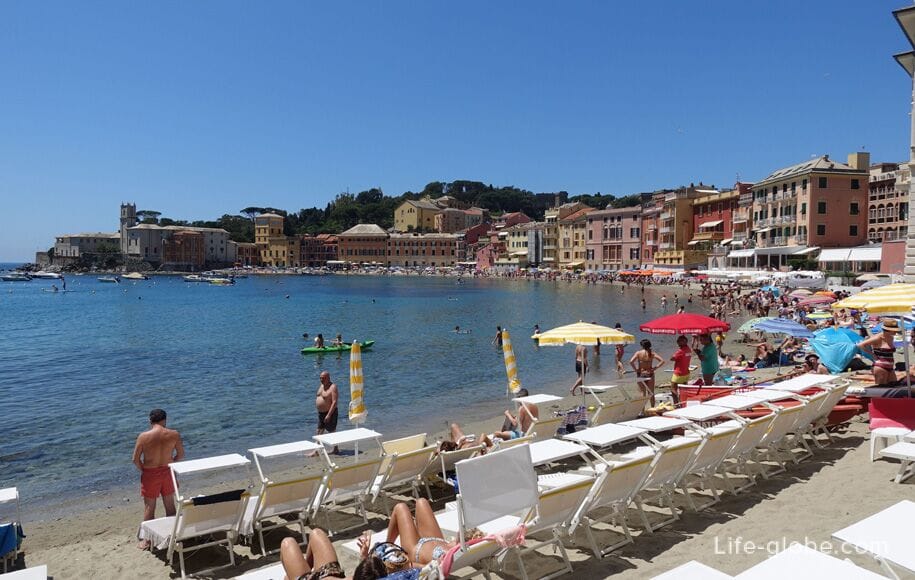 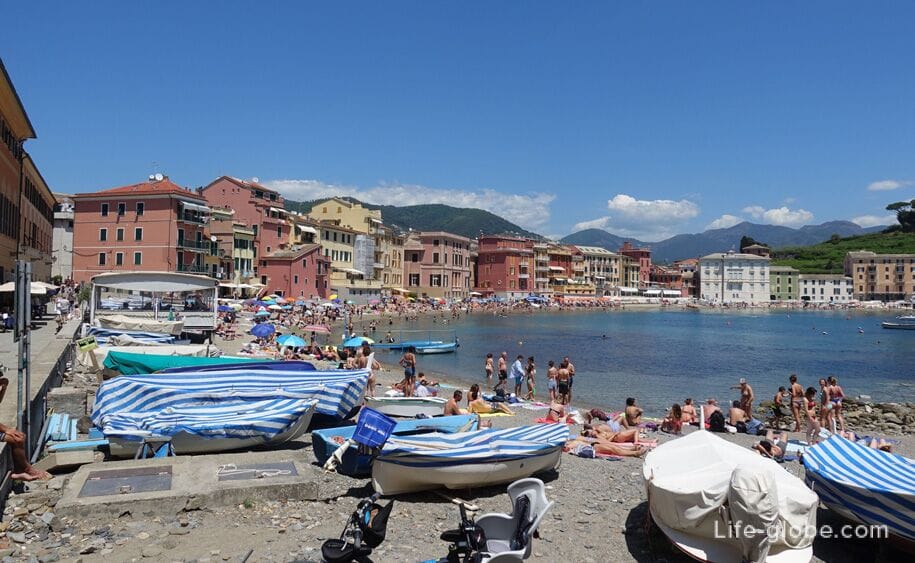 Directly on the beach of the Bay of silence is a 4-star hotel Miramare, a restaurant and a terrace with sea views. It offers free access to a private beach area and air-conditioned rooms with free Wi-Fi and satellite TV. The room price includes: Breakfast or Breakfast and dinner. Link to the hotel

The beaches of Cape Manara and Cape Sestri

Massive Manara promontory (Punta Manara), the foot of which is characterized by wild rocky coast, where you can also swim and sunbathe, originates on the North side of the beach of the Bay of Silence extends beyond Sestri, to the neighboring village of Riva Trigoso. 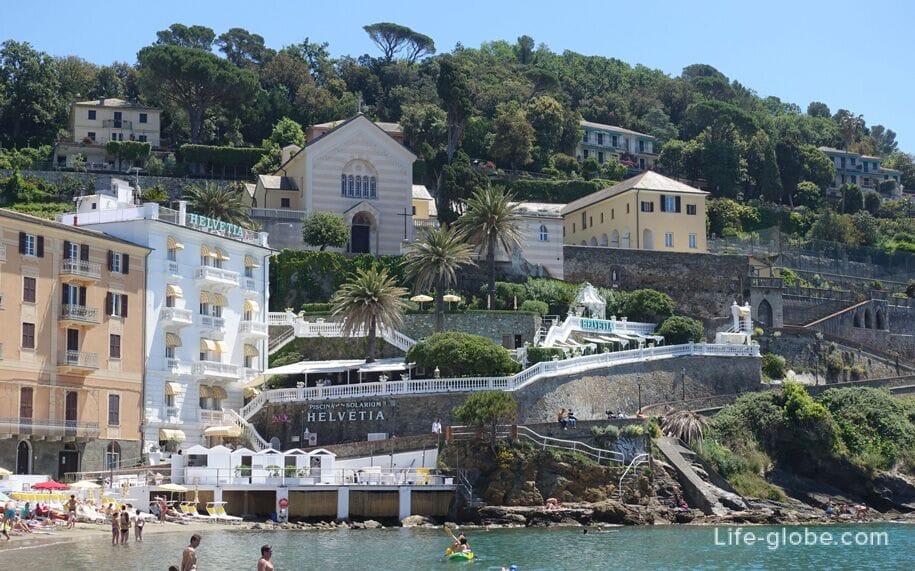 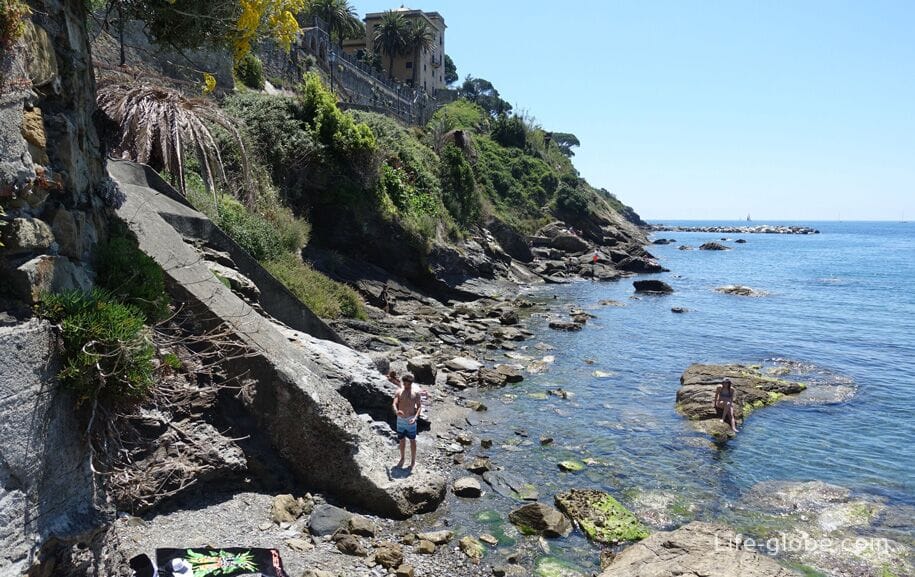 Near the beach of the Bay of Silence, on the slopes of Cape Manara is a 4-star hotel Helvetia has a private beach, a Spa pool, heated swimming pool and a rooftop terrace, a garden, a restaurant, bar and private Parking. Room rates include Breakfast. Link to the hotel 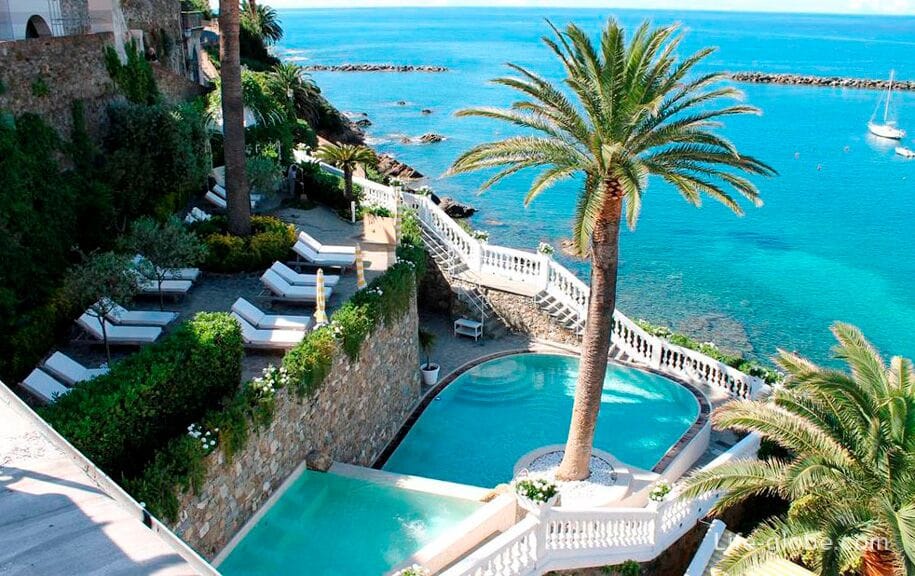 On the south side of the beach of the Bay of Silence is located Cape Sestri Levante with steep rocky shores. 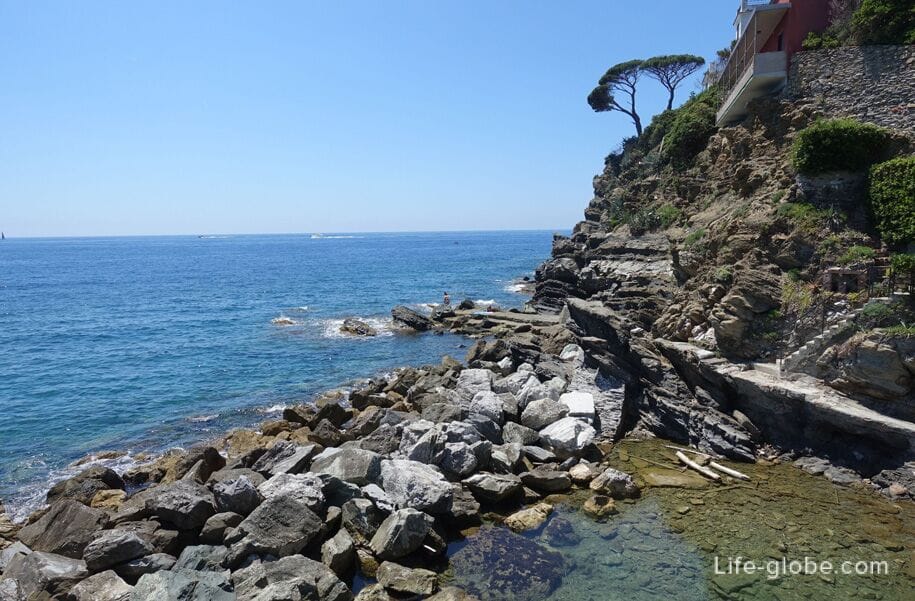 The beaches of the Bay of fairy Tales

Bay of Fairytales and the Bay of Fables (Baia delle Favole) - the larger of the two bays located in the Western part of the coast of Sestri Levante.

The beaches of the bay originate from the rocky Cape Sestri, where, among the stones, a small privat beach is located in solitude, with equipped slopes into the sea and all the necessary infrastructure.

The beach has a so-called natural swimming pool which was carved out of the space in the rocks where the sea water flows.

The beach belongs to the 4 star hotel Grand Hotel Dei Castelli islocated in a historic building Villa Gualino which on the hill among extensive gardens. From the hotel to the beach you can descend (and climb from the beach to the hotel, respectively) on the Elevator. Link to the hotel 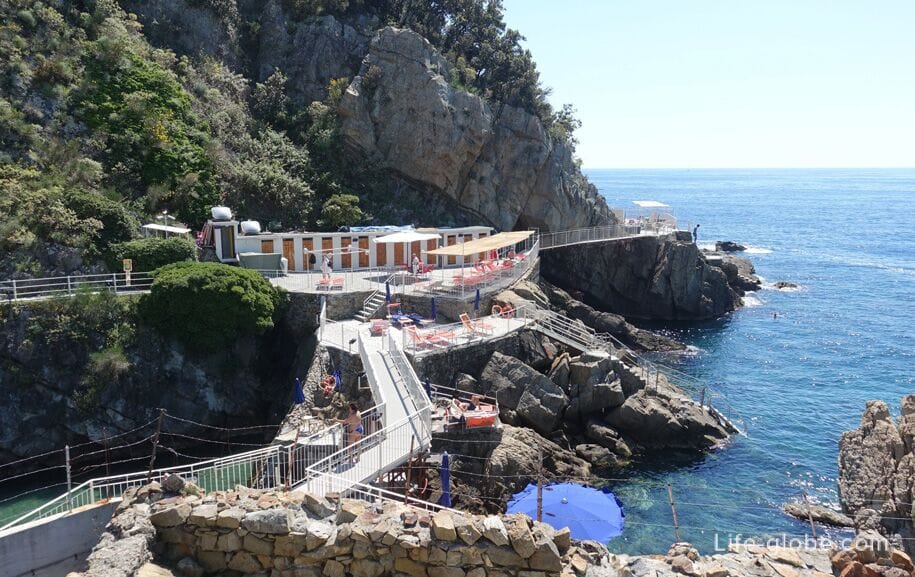 Behind the beach of the Grand Hotel there is a small harbor (port, marina).

From the centre of town leads to the harbour promenade, which runs along the port and is one of the most popular places for walking and recreation.

Near the port there are several restaurants and cafés, there is a Parking space.

From the port you can take boat trips to the resort towns of Santa Margherita Ligure and Rapallo, the national Park Cinque Terre or visit Portofino. 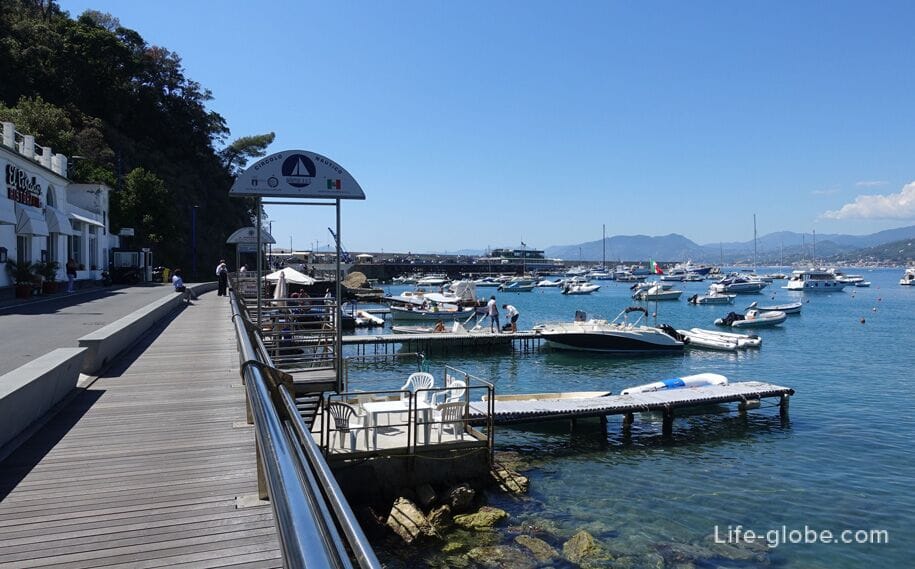 From the street Pilade Caroló (VIa Pilade Queirolo) and to the western border of Sestri Levante stretches a continuous strip of beaches.

On beaches dense sand of gray color, closer to the Western suburb of the city sand is replaced by a pebble, at first small, then larger.

The beaches of the Bay of fairy Tales are public, which are also attended by private beach clubs and many other beaches of the Riviera, offering a full range of beach services: sun loungers and parasols, showers and toilets, changing cabins and chambers for storage of small items, beach cafes, bars, and decks for ease of movement and urns, water sports and children's play areas, rescue centers and first aid.

The cost of renting chairs and umbrellas from the sun varies depending on Bangui and the line on which the sunbeds (the closer to the sea, the more expensive). Sun lounger or chair € 4 umbrella 5 Euro. The daily pass is valid from 20 - 25 Euros. 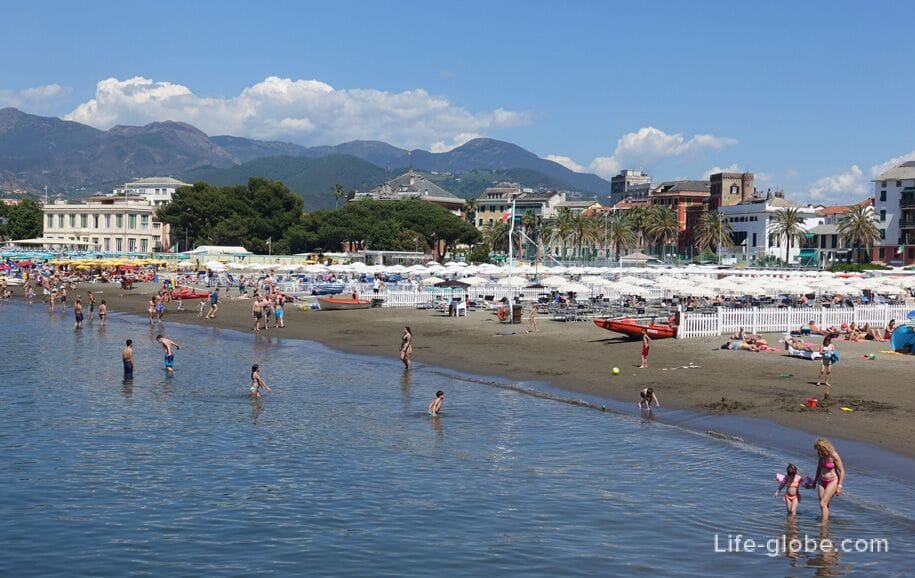 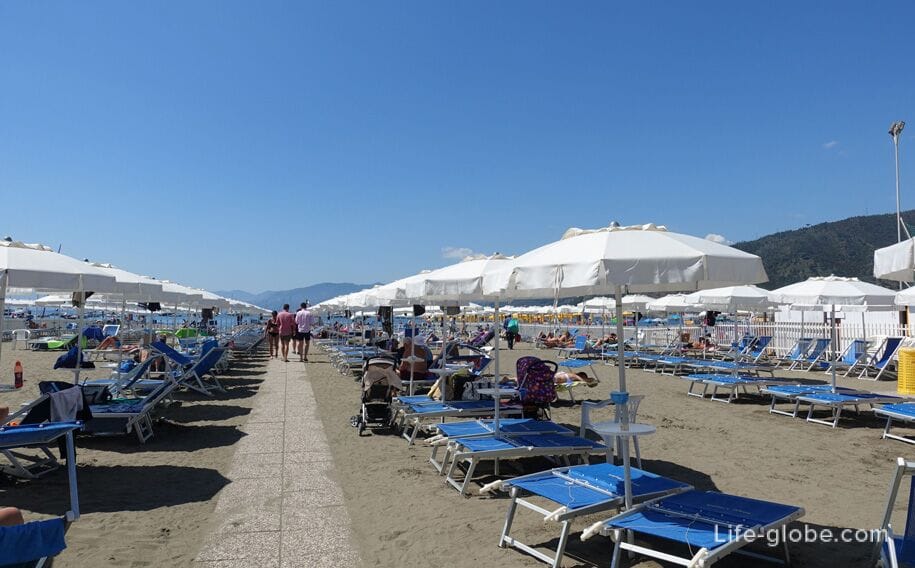 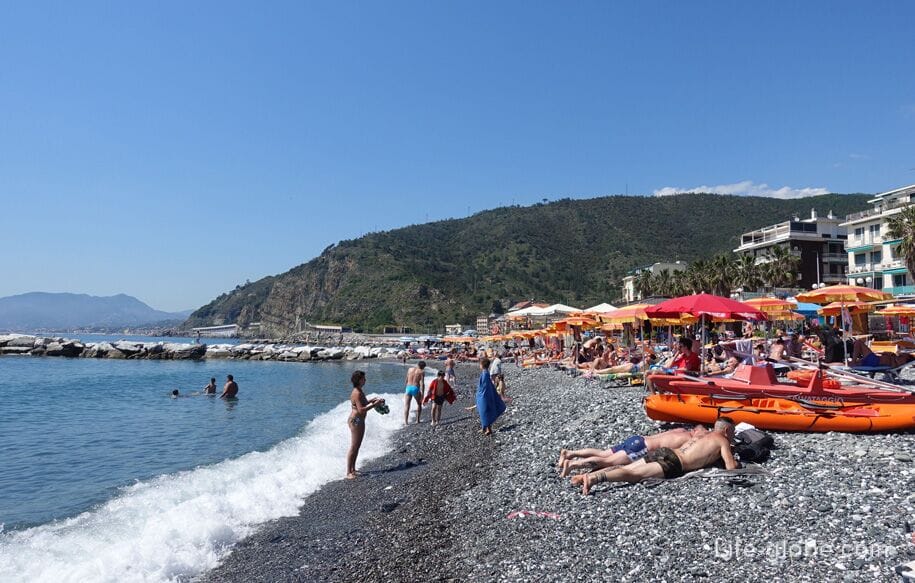 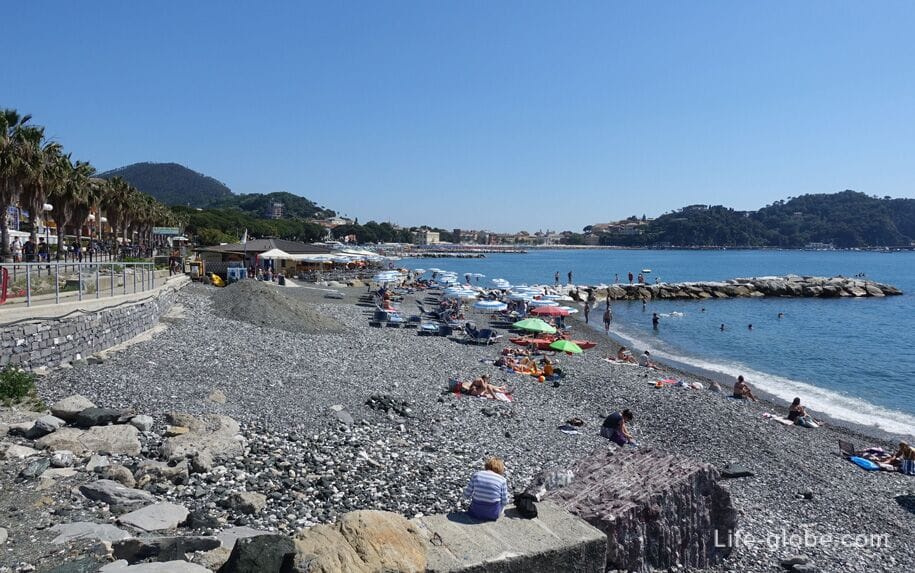 Along the Bay of fairy Tales is a long promenade, which is the second, after the historical centre, visited the place in Sestri Levante.

On the waterfront: places to stay, kiosks with food and drinks, restaurant, children's rides, small Park, sculptures and monuments. Read more about Bay of fairy Tales and the beaches... 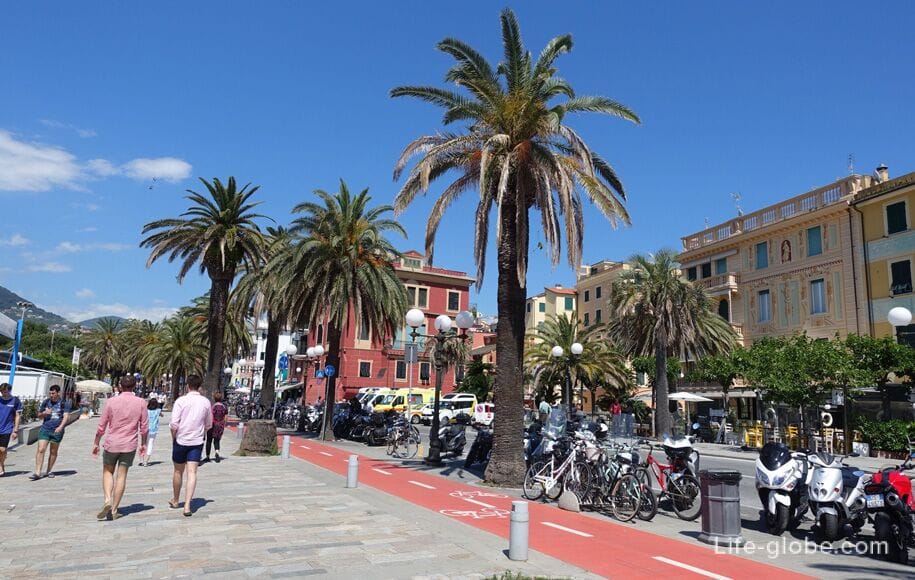 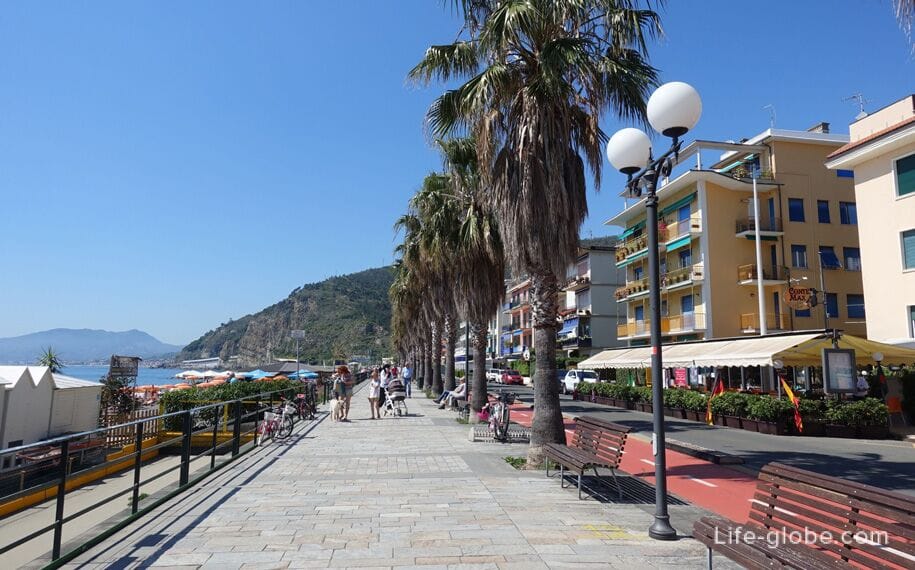 Directly on the waterfront, in its central part, is a remarkable historic building - art Nouveau Villa, within which is a 4-star Suite Hotel Nettuno - the only one with direct access to the beach in this part of Sestri Levante. The hotel has a private part of the beach, pool, restaurant, lounge bar and elegant rooms and suites. Room rates include Breakfast. Link to the hotel 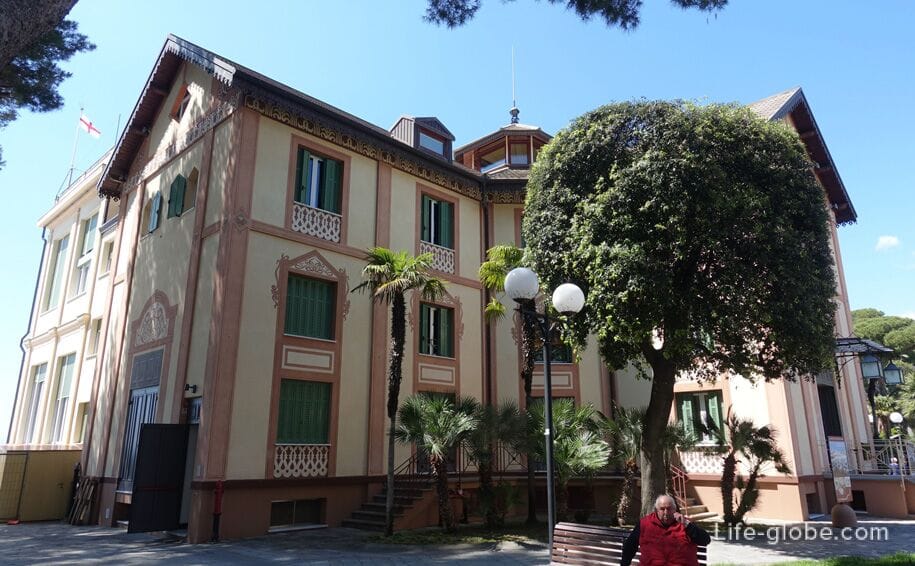 All accommodation in Sestri Levante as near the beach, and more remotely from those, you can view and book here