The 1st Engineering Bridge (the first Engineering bridge) is one of the bridges in the historical center of St. Petersburg, which is also known as the bridge with the sculpture "Chizhik-Pyzhik".

The 1st Engineering Bridge spans the Moika River at the place where it flows out of the Fontanka River.

The bridge is part of the Fontanka River embankment and connects Spassky Island with the Summer Garden Island, which occupies the most beautiful park in the center of St. Petersburg - A summer garden with fountains and sculptures.

The name" Engineering", the bridge received due to the fact that it is located next toMikhailovsky (Engineering) Castle is a former imperial palace, within the walls of which a museum is now located. 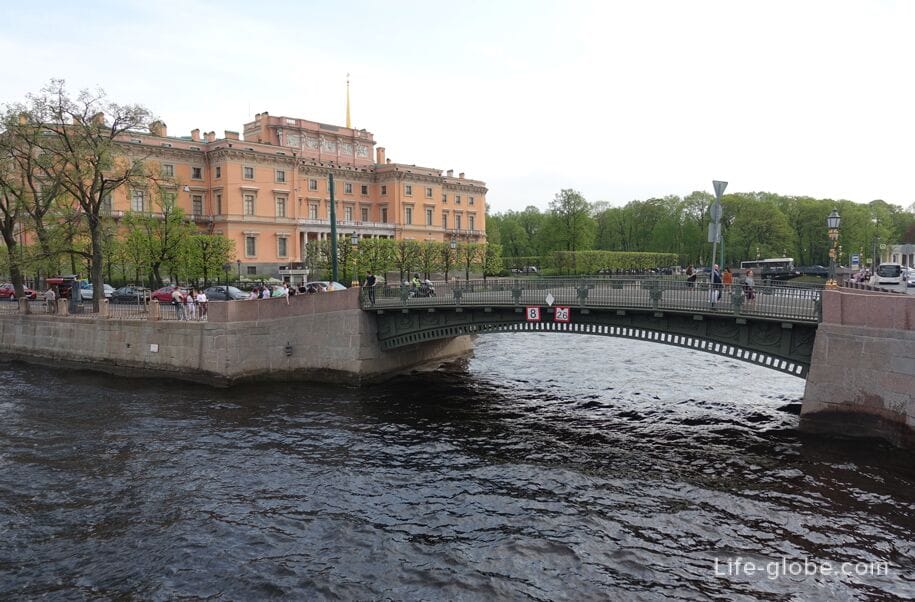 The bridge is a single-span metal prestressed frame structure with a curved crossbar and a reinforced concrete slab of the roadway. The abutments of the bridge are rubble masonry on a pile base, lined with granite.

The bridge is distinguished by a rich architectural decor, and has floor lamps with lanterns. 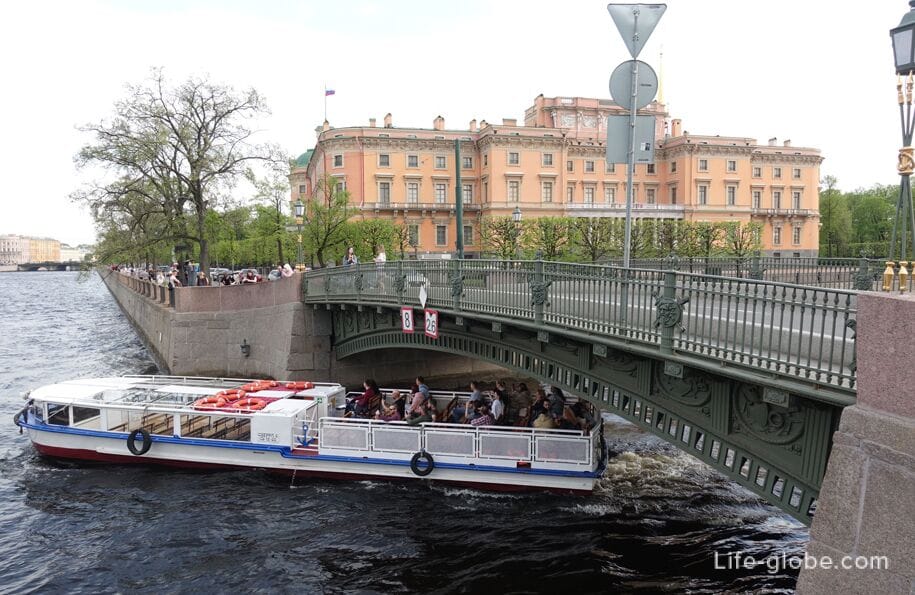 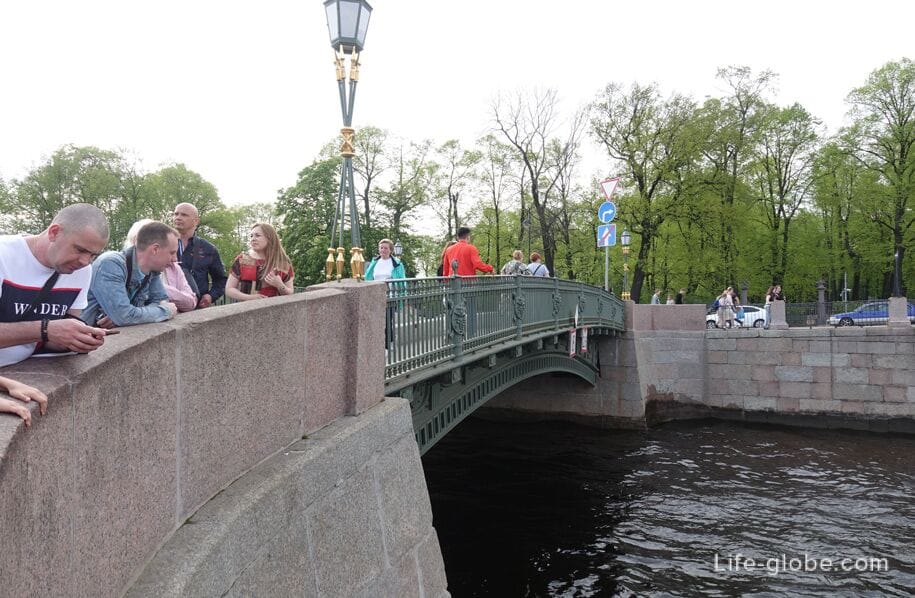 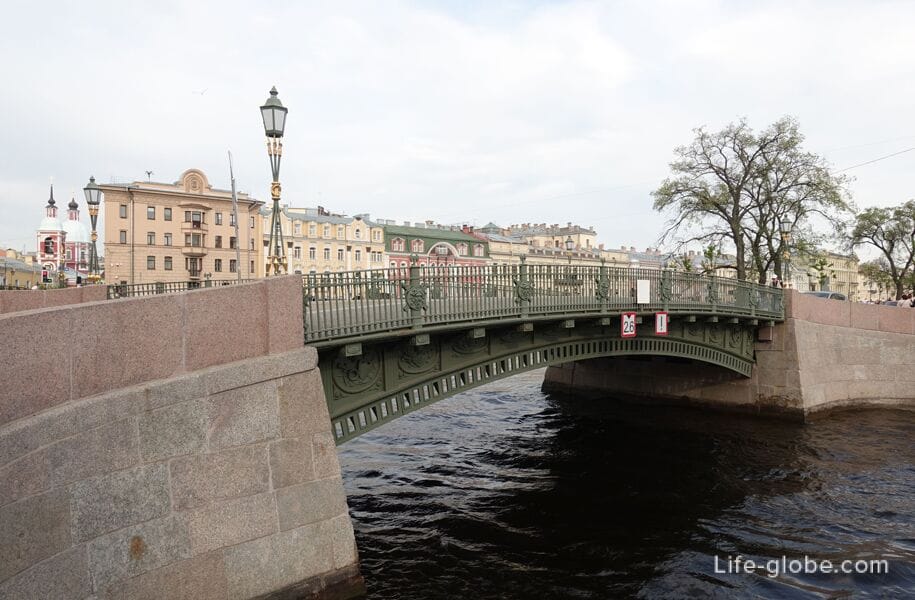 The 1st Engineering Bridge is a roadway and pedestrian.

The roadway of the bridge is separated from the sidewalks by high curbs. 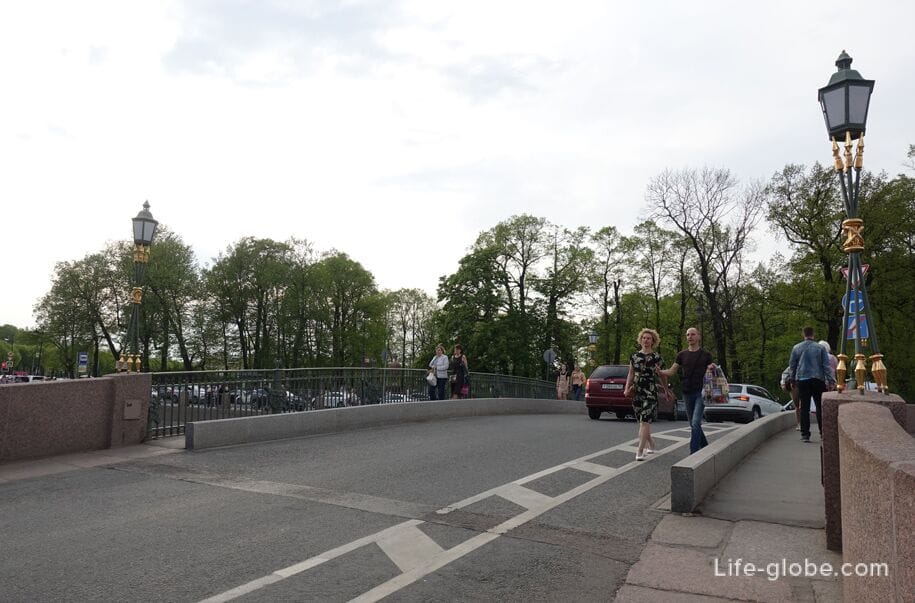 Near the bridge, on the side of the Fontanka River, there is one of the iconic sights of St. Petersburg - a small bronze sculpture "Chizhik-Pyzhik". 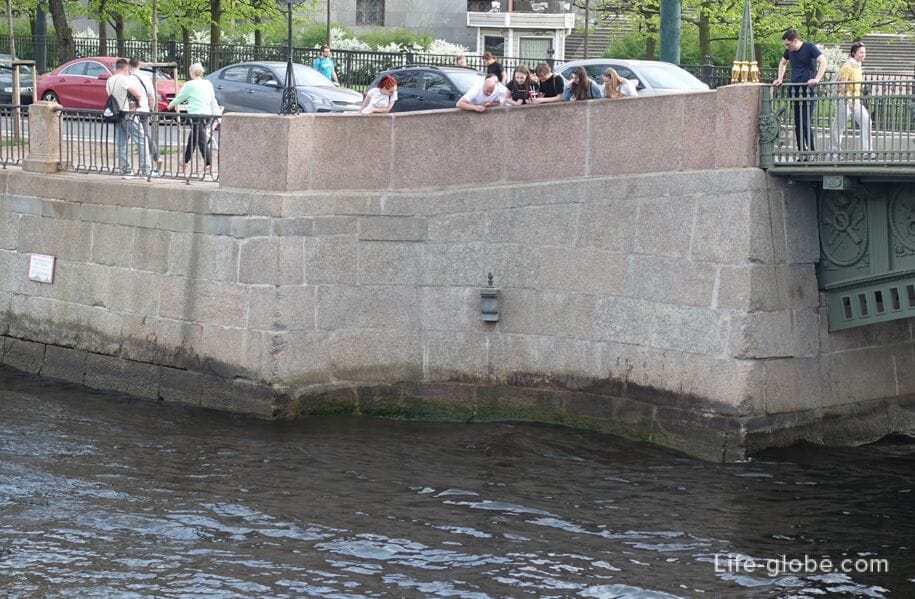 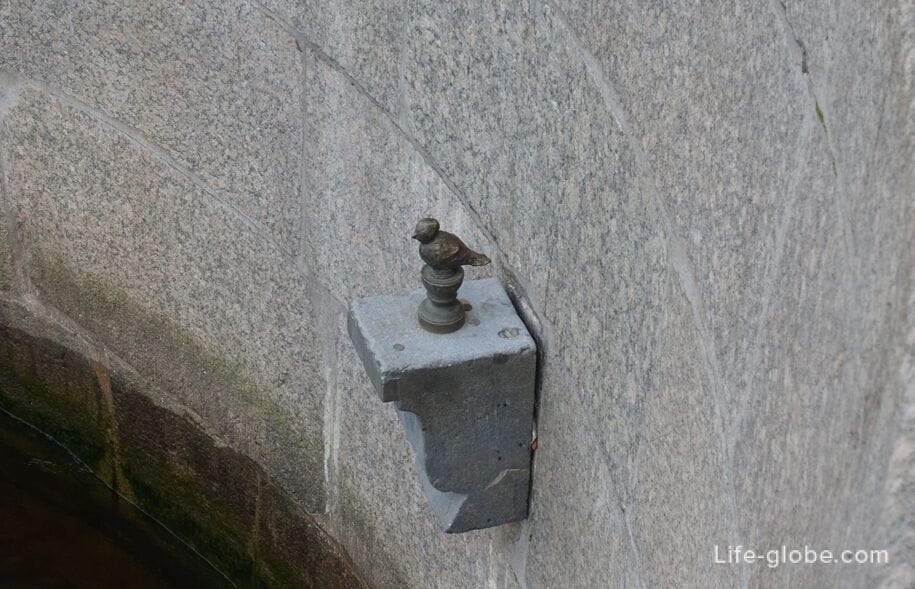 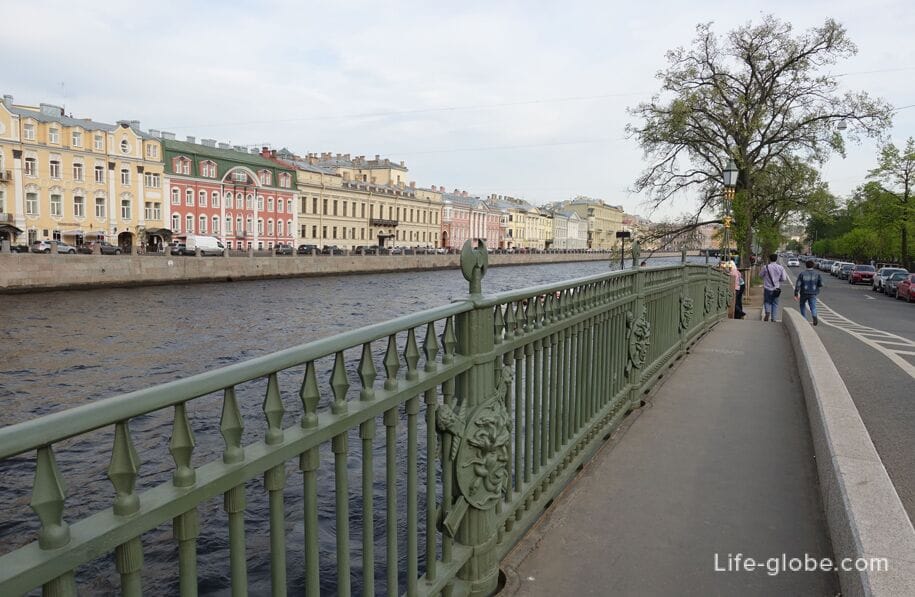 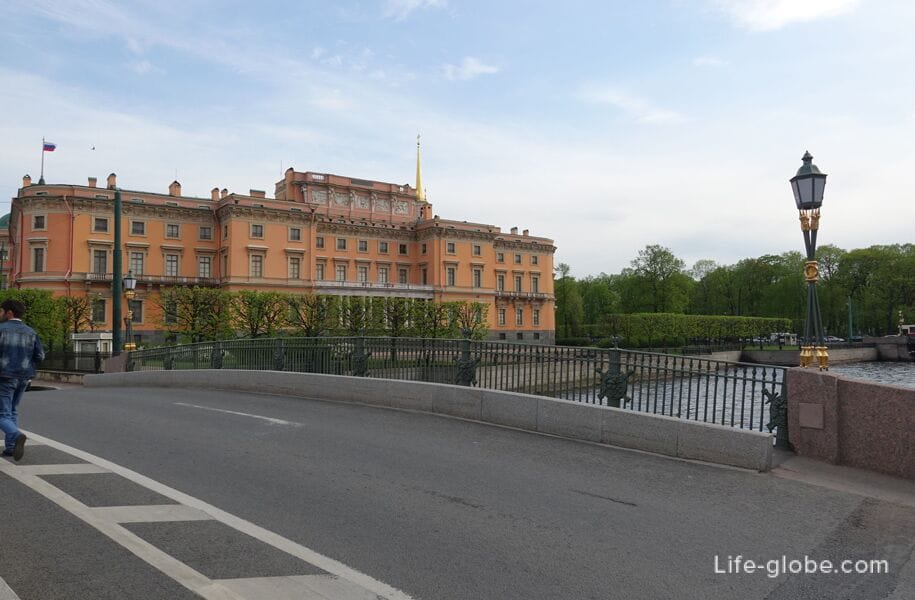 View of the Panteleimon Bridge 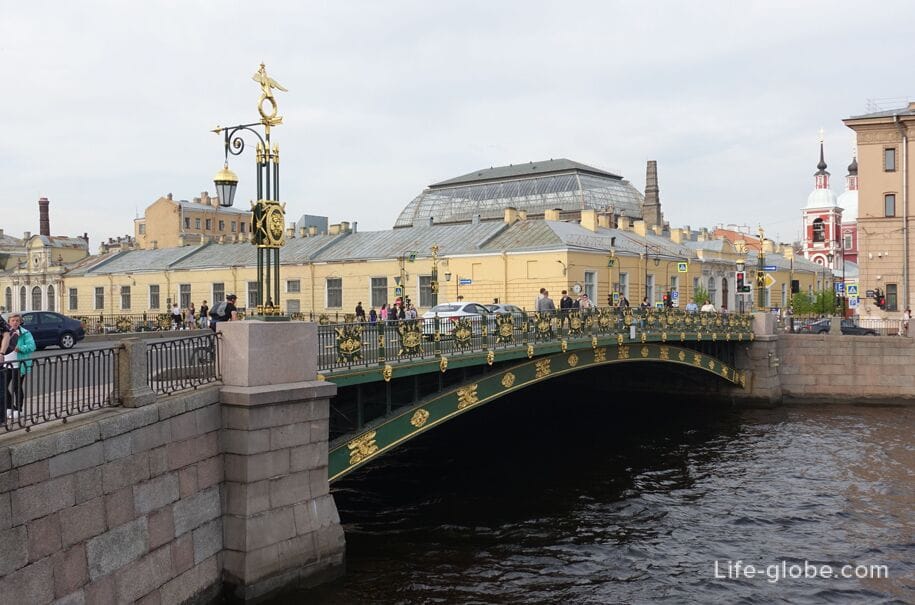 View of the Moika River and the 1st Garden Bridge 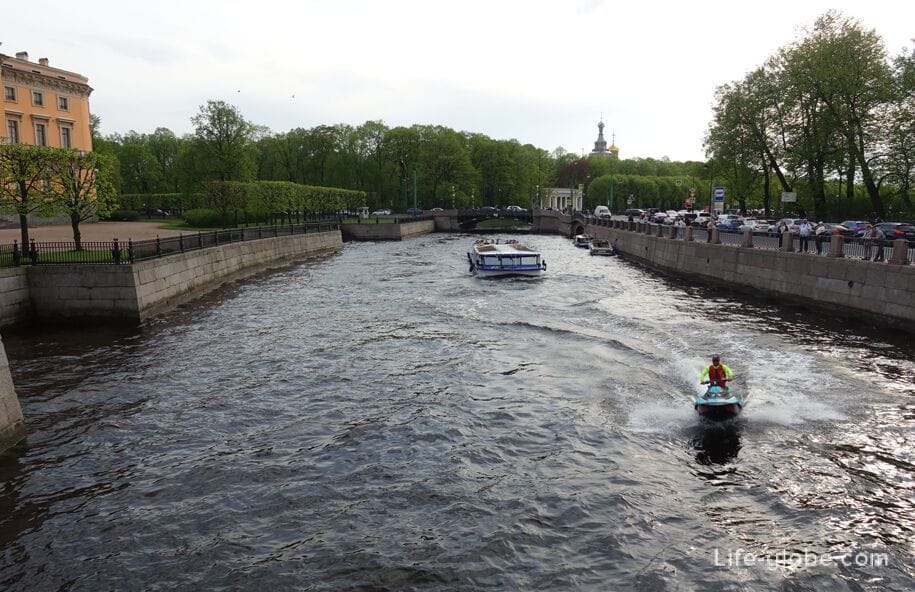 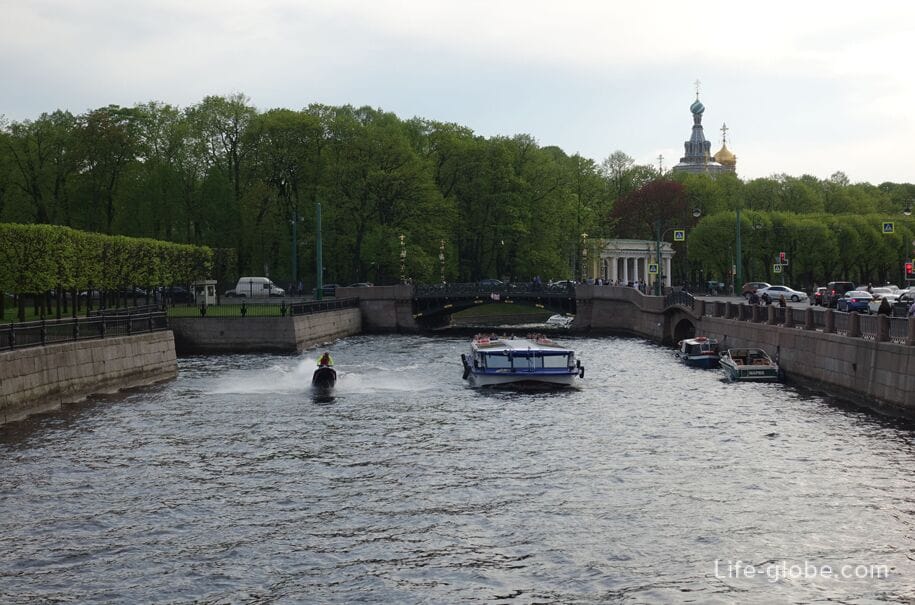 History of the 1st Engineering Bridge

The first bridge on this site appeared in the 1710s, after the reconstruction of the Moika riverbed, when the river was straightened and connected by a canal from the Mikhailovsky Garden to the Fontanka. The bridge was a wooden drawbridge of the lifting type.

In the early 1740s, the bridge began to serve as a communication with the Summer Palace of the Empress Elizabeth Petrovna (the palace has not been preserved, the Mikhailovsky Castle is now located in its place). Then the bridge was called "Summer" and was thrown over the Moika River just downstream, relative to its current location.

At the beginning of the 19th century, a through passage was arranged along the Fontanka Embankment, where in 1824-1825 a new cast-iron single-span arch bridge was built according to the project of P. P. Bazin and E. K. Clapeyron. The bridge was richly decorated and had lanterns. The bridge is still located in this place today.

In 1826, a cast-iron grating was installed on the bridge, cast according to the project of P. P. Bazin.

In the second half of the 19th century, the bridge from the "Summer" was renamed "Engineering", and then "1st Engineering Bridge".

In 1946, traffic on the bridge was closed due to the subsidence of the supports and progressive deformations of the superstructure. In 1952-1954, according to the project of engineer B. B. Levin, the bridge was reconstructed, and a single-span metal bridge was built instead of a cast-iron arch bridge, but the architectural design of the bridge was carried out in the same form.

Subsequently, the bridge was subjected to restoration and repair work. 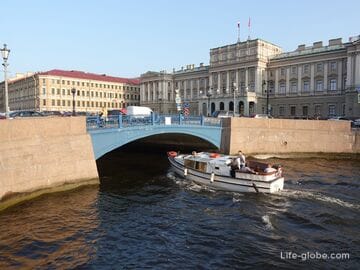 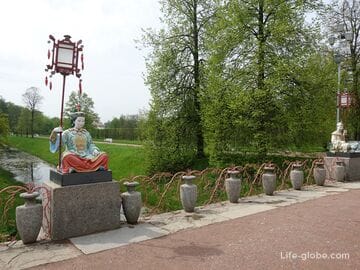 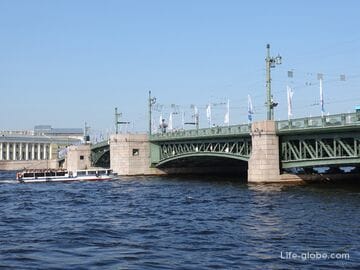